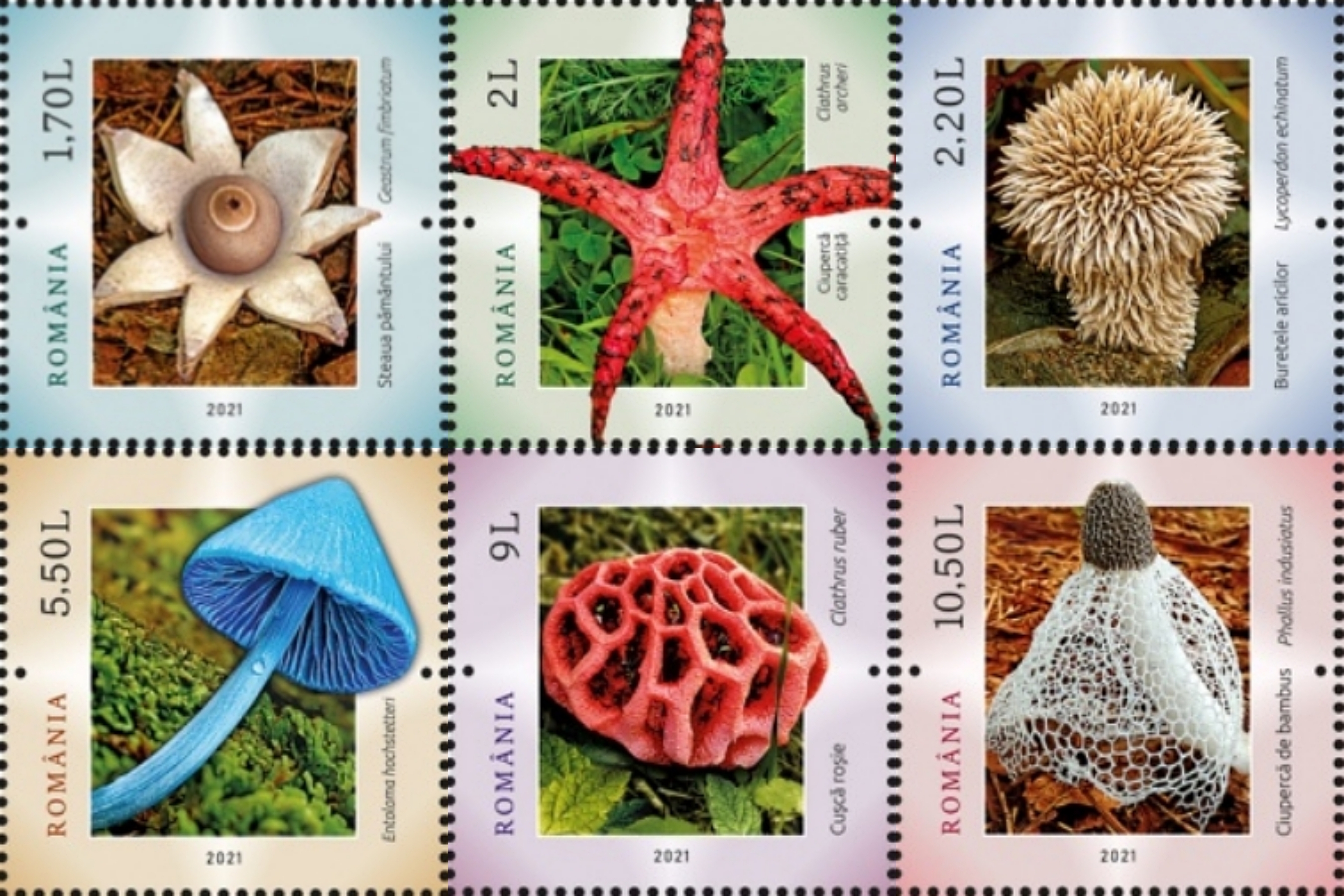 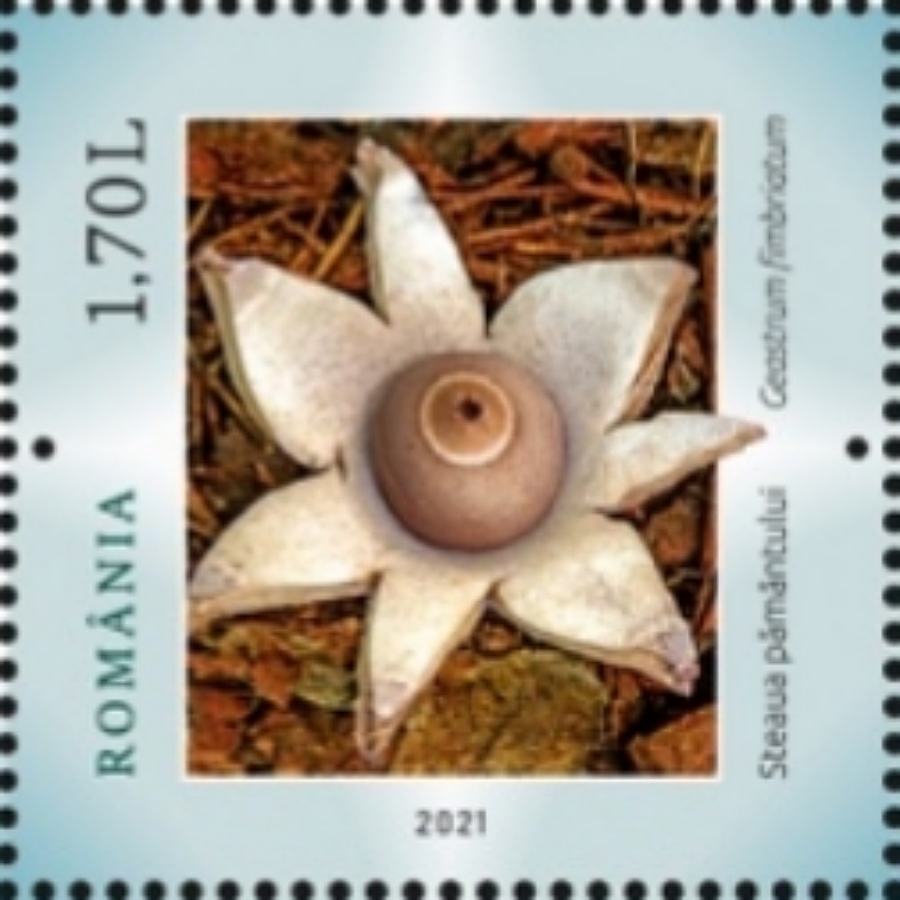 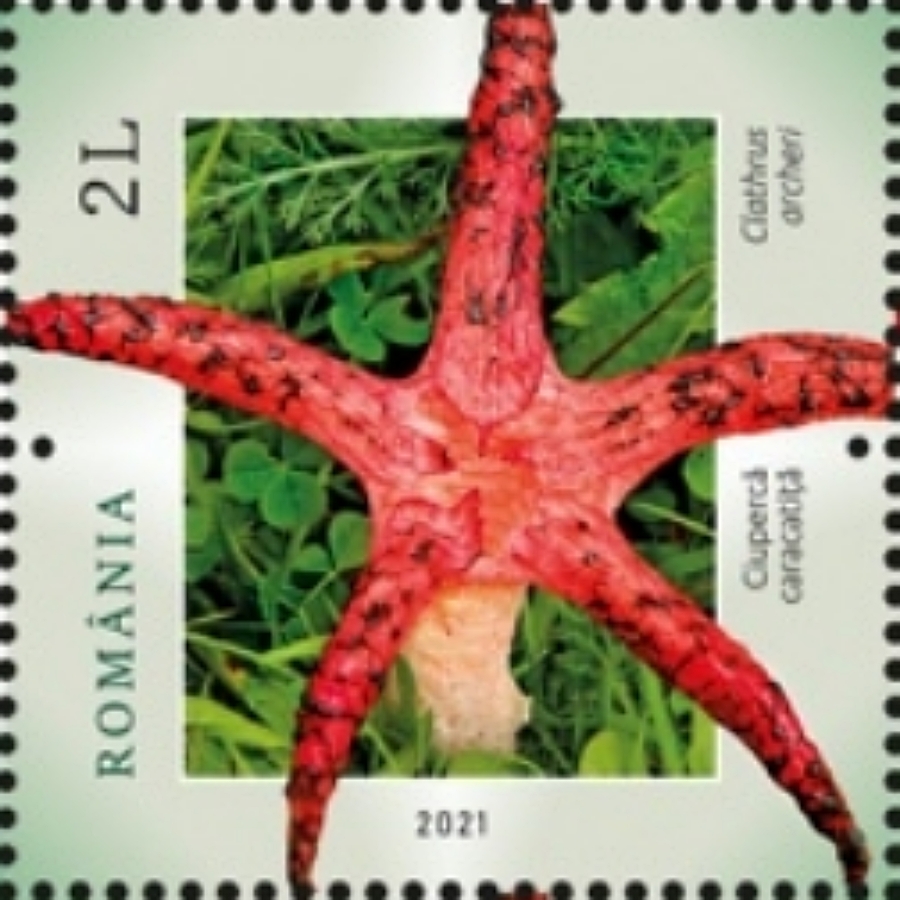 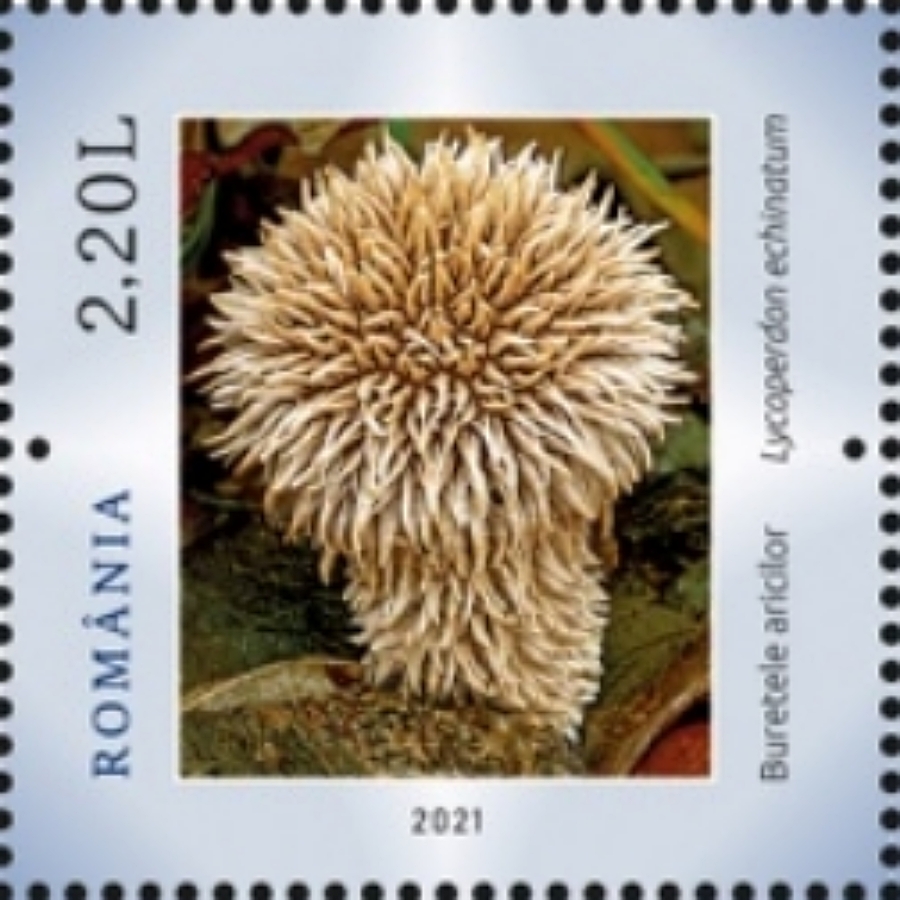 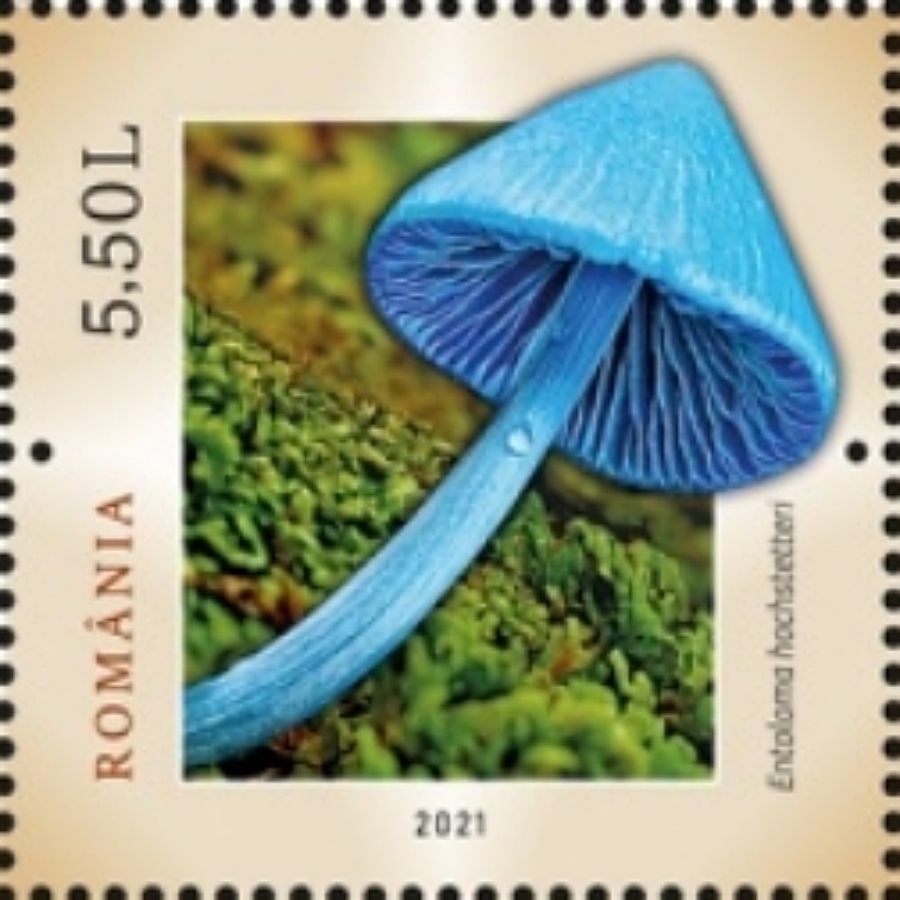 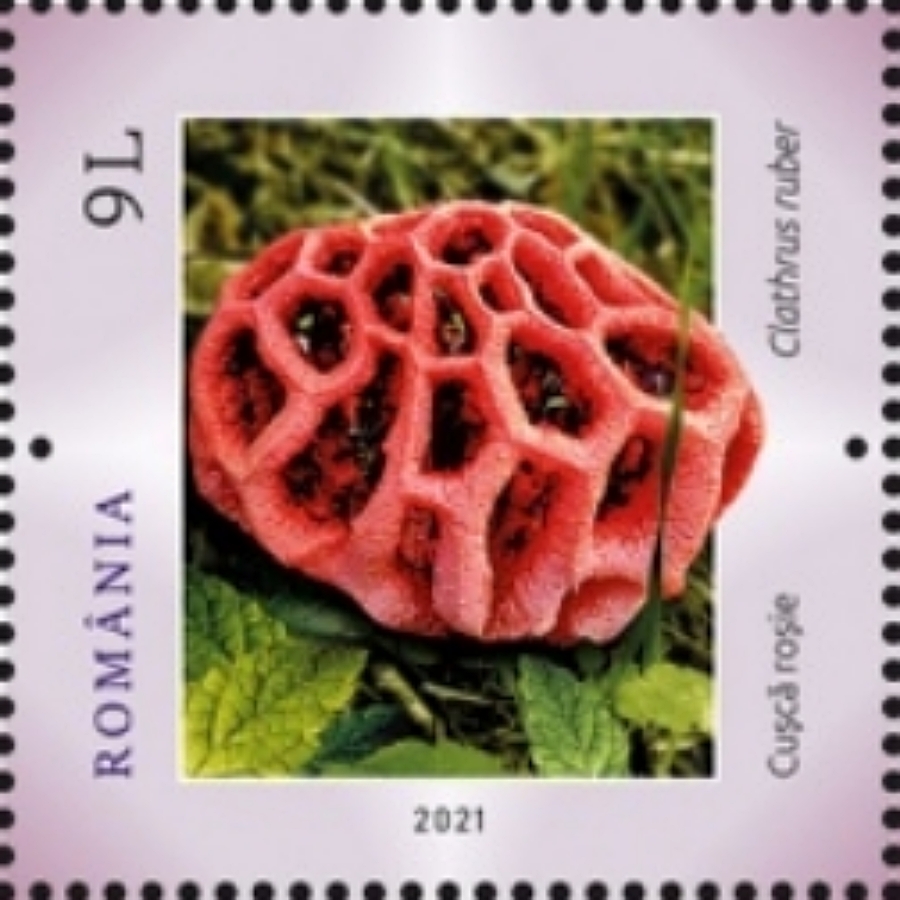 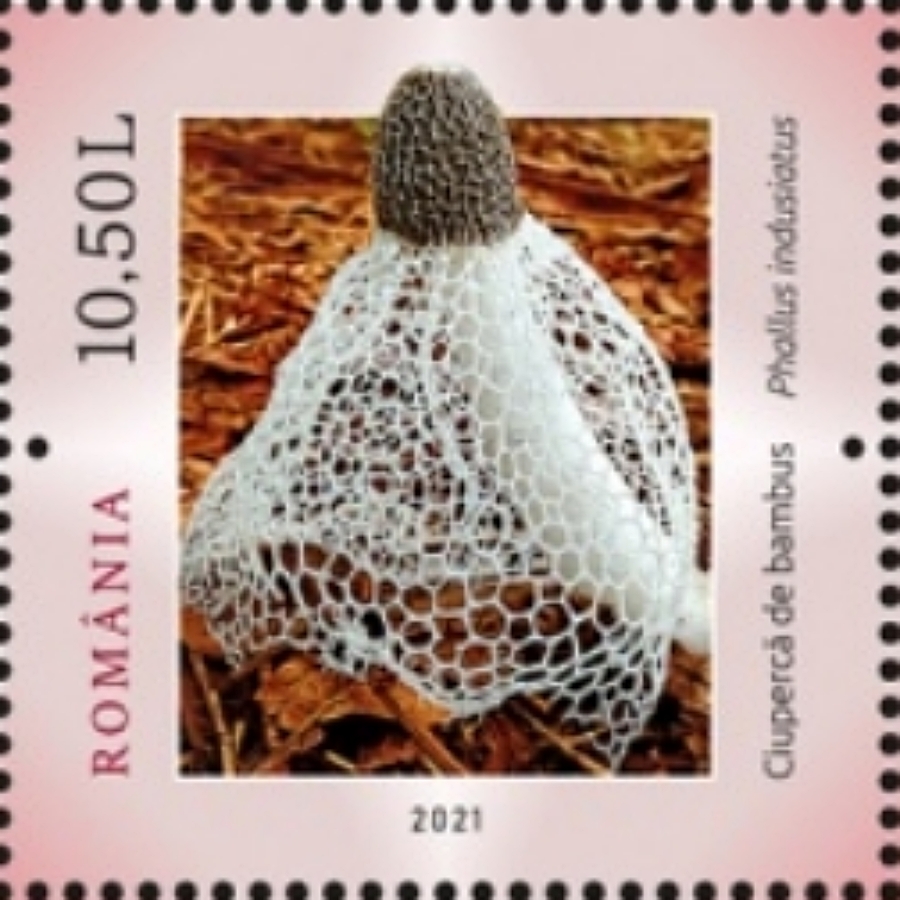 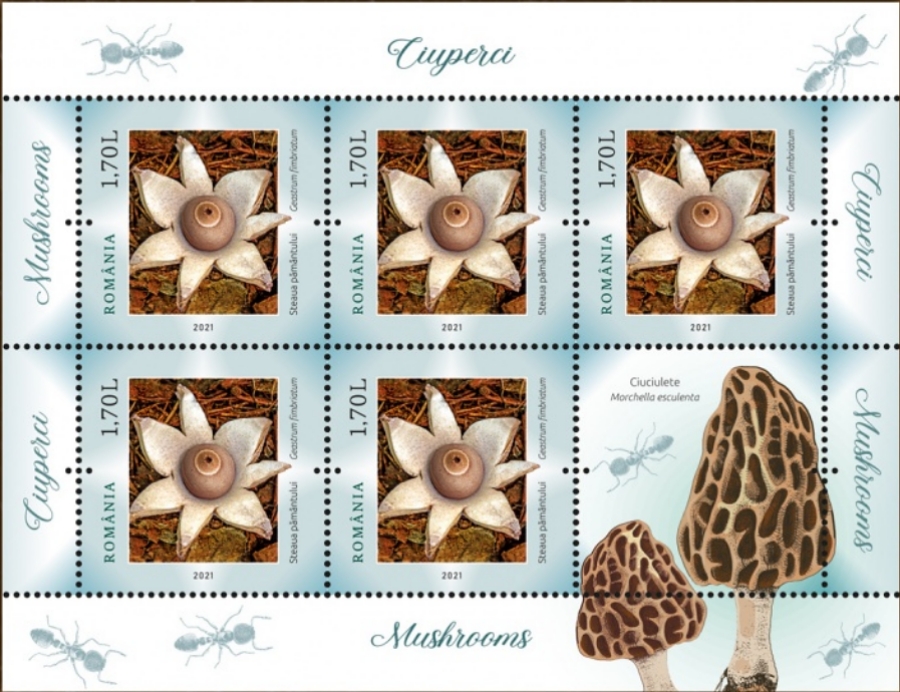 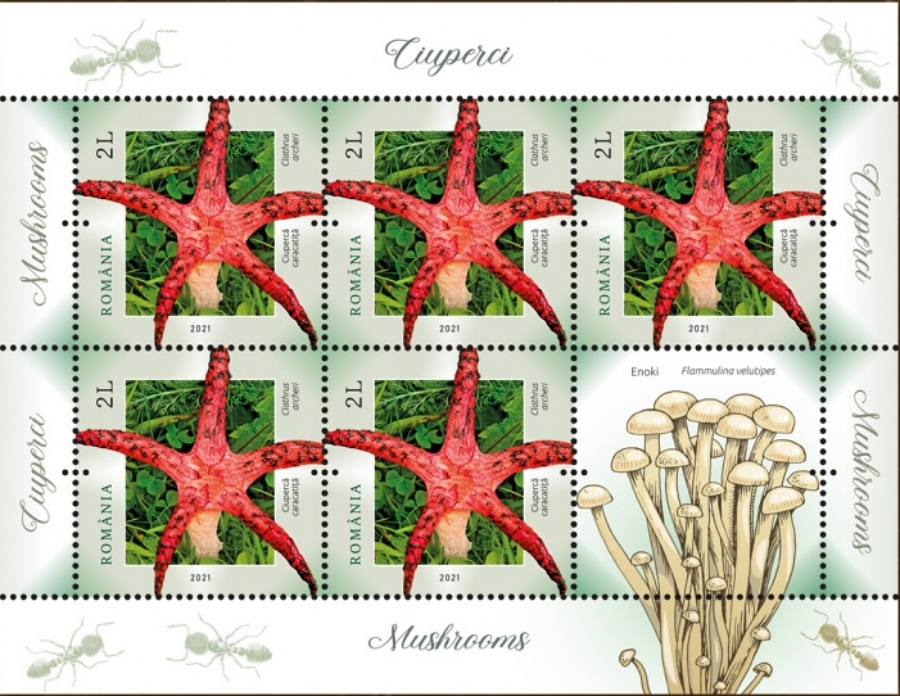 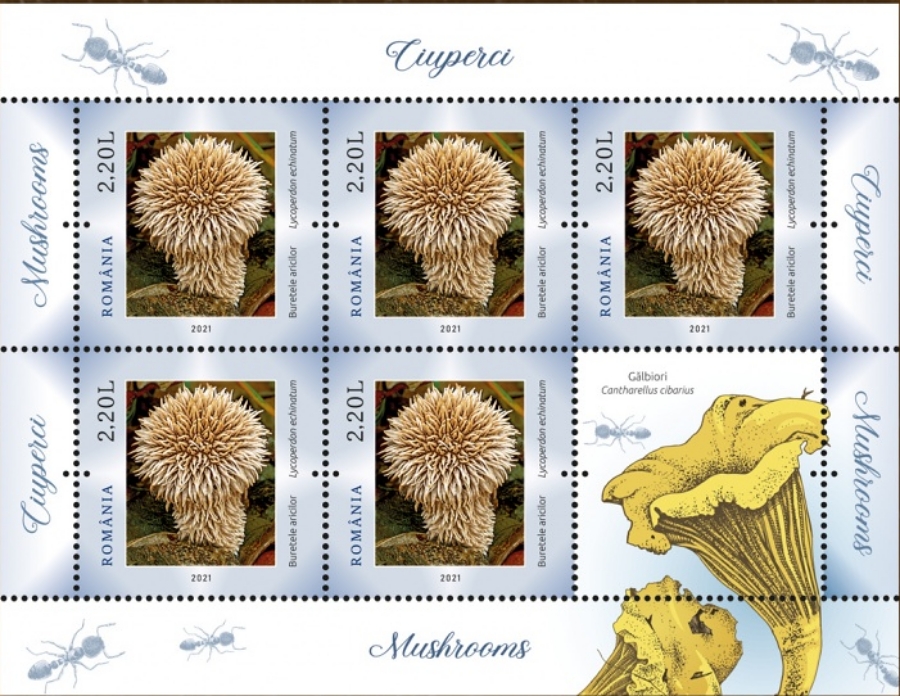 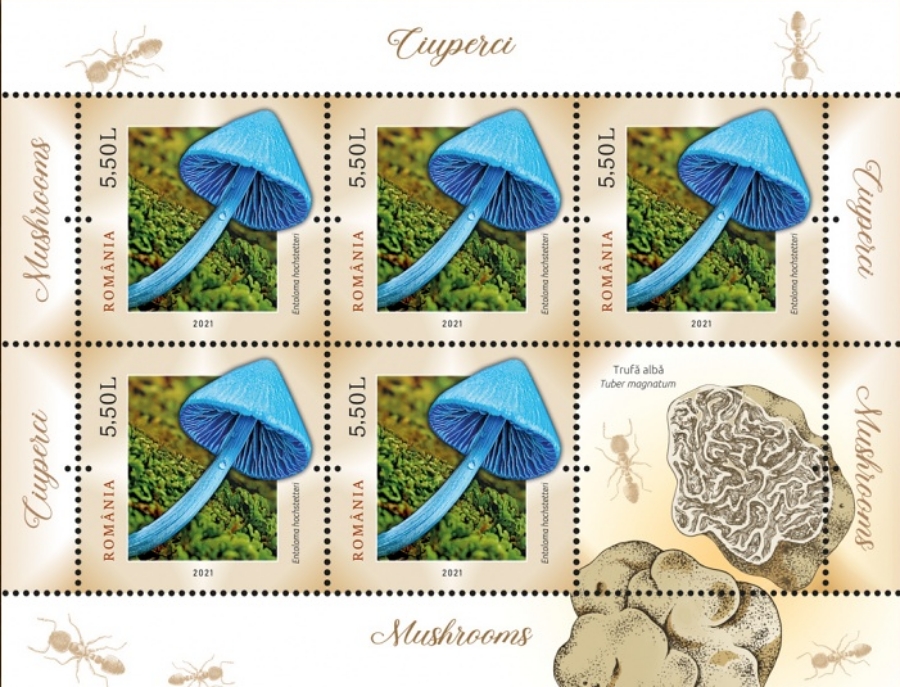 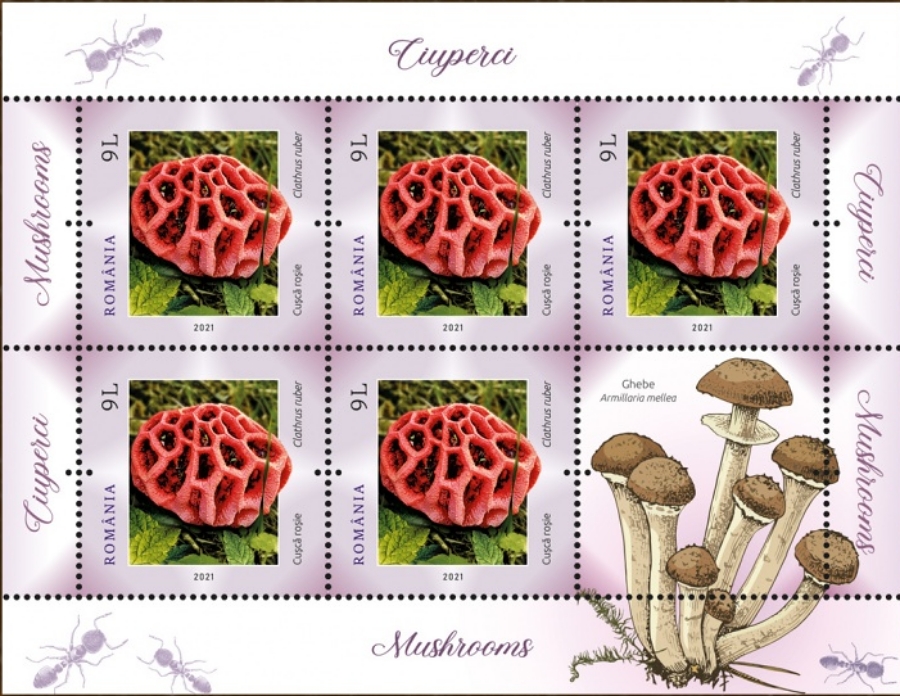 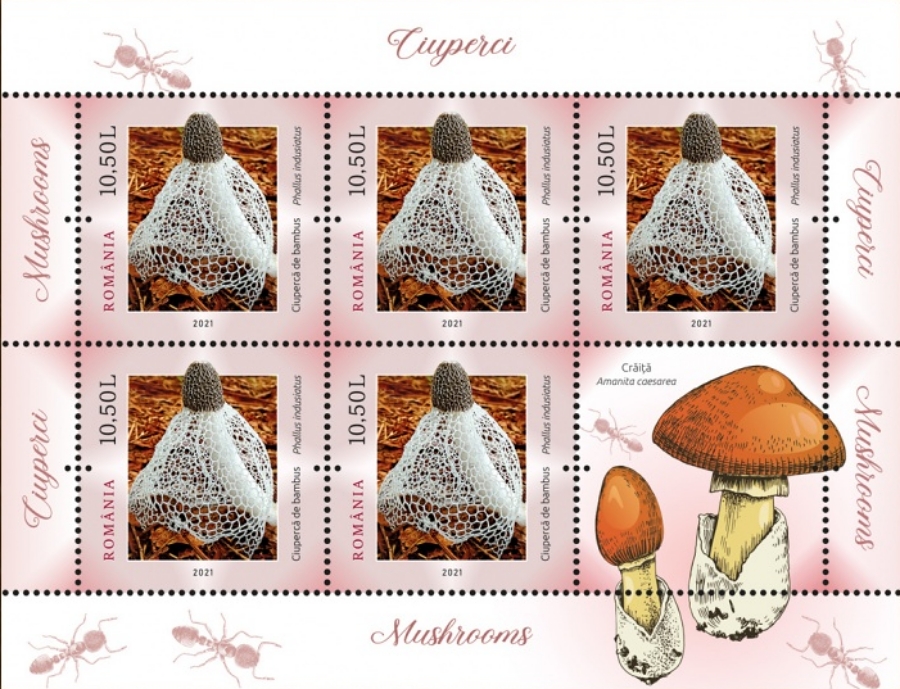 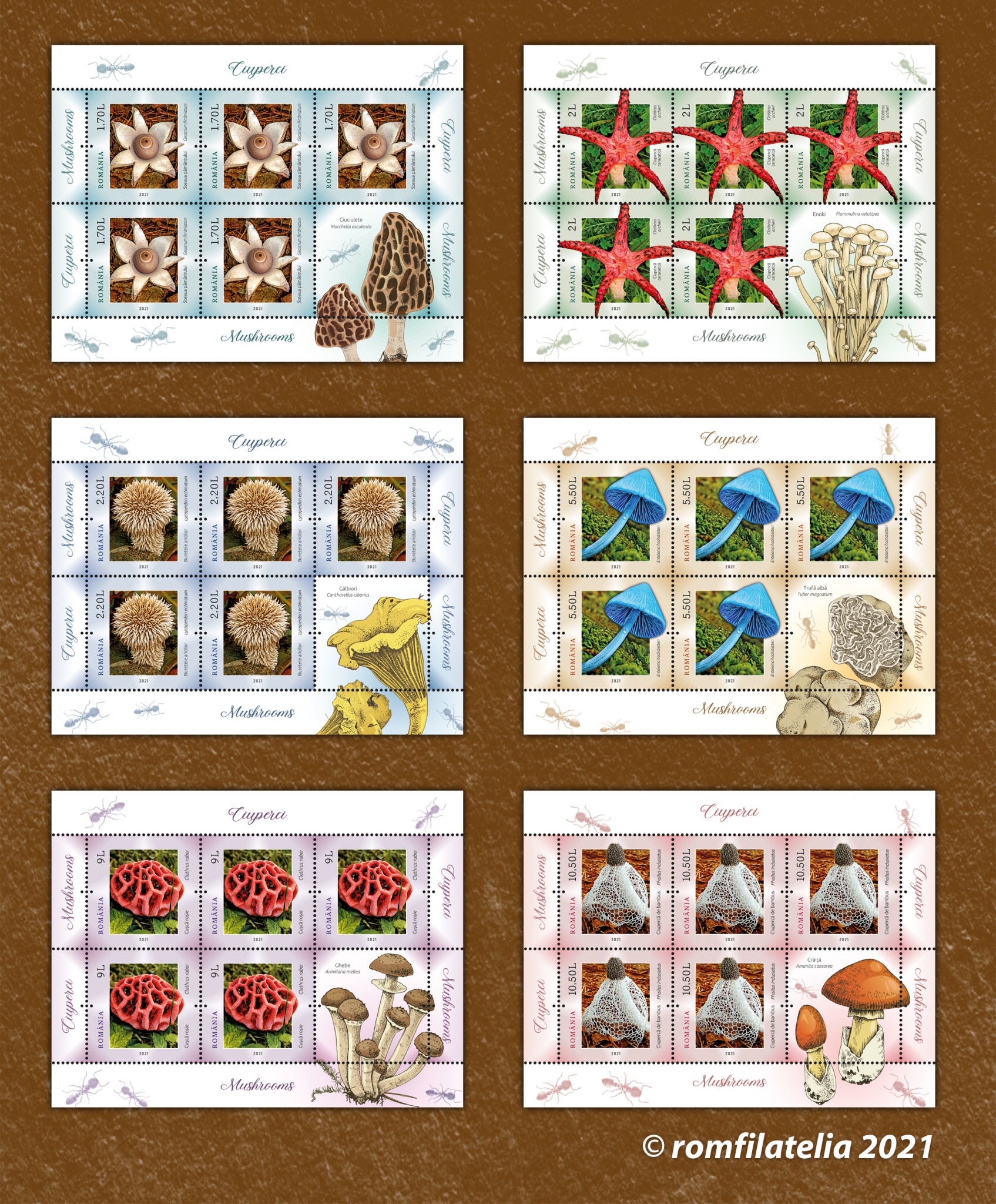 Romfilatelia introduces into circulation, on Thursday, the 6th of May, a new postage stamps issue dedicated to our planet’s biodiversity: Mushrooms.

Although considered plants for a long time, mushrooms (fungi) are, in reality, a completely different group of living things. Mushrooms cannot perform photosynthesis, like plants, they feed by absorbing organic substances from the substrate in which they grow. In fact, at the cellular level, mushrooms are, in some ways, more like animals than plants. They are neither animals, nor plants, they are eukaryotic organisms classified in a separate group – Kingdom Fungi. To date, approximately 148,000 species have been described, from microscopic forms (microorganisms such as yeasts and molds) to macroscopic species, sometimes of impressive size (in the species Armillaria bulbosa, the mycelium can grow in the soil on an area of 15 ha).

Fungi grow either on different substrates – organic matter, soil, dead wood –, or on living organisms: plants, animals, even other fungi.

Fungi play an essential role in nature, breaking down organic matter into simpler substances that can be absorbed by plants. A major impact on the environment also has parasitic fungi, as well as those that establish relationships of mutualism (mutual aid) with other organisms.

In general, the fungus is made up of a branched structure called a mycelium, usually hidden in the substrate. This is made up of filaments called hyphae, through which the fungus absorbs nutrients from the substrate on which it grows. In the case of species called macromycetes, specific, macroscopic structures are formed from the mycelium, called fruit bodies (sporophores). These generally come to the surface of the substrate and yield spores (specialized cells through which fungi multiply). From the spores arrived on a suitable substrate, the mycelium is formed, and from it fruit bodies are formed periodically. What we commonly call a “mushroom” is, therefore, the fruit body of macroscopic fungi, visible on the surface of the substrate. Depending on the species, this fruit body is of different shapes, colors and sizes.

The six stamps of the series present fungi with spectacular fruit bodies in shape or colour, reflecting the extraordinary diversity of this group of living things.

On the first stamp, with the face value of Lei 1.70, fringed earthstar (Geastrum fimbriatum) is represented. This mushroom grows on humus-rich soil of deciduous and coniferous forests. The immature fruit body is spherical, totally or partially buried in the ground. At maturity, the thick outer membrane divides into several sharp-pointed lobes, giving the fungus the shape of a star. In the middle there is a globular, membranous structure in which the spores are found. This mushroom is inedible due to its hard, fibrous texture.

On the second stamp, with the face value of Lei 2, the octopus stinkhorn (Clathrus archeri) is illustrated, a species native to Australia, from where it arrived in other regions of the world, being discovered even in Romania. The fruit body is initially spherical, white-coloured. At maturity, it has the appearance of an “octopus” with 4-8 arms arranged radially, pink or red in colour. It has a repulsive odour, attracting insects that contribute to the spread of spores.

On the third stamp, with the face value of Lei 2.20, the spiny puffball (Lycoperdon echinatum) is depicted. It has a globular shape, which tapers towards the base. The fruit body is cream-coloured, and the surface is covered with a layer of long spines, which fall when reaching maturity. In the young stage, the inner tissue is white and firm; at maturity, it turns into a brown, powdery mass containing spores. It also grows in our country, in deciduous forests, on calcareous soil.

On the fourth stamp, with the face value of Lei 5.50, Entoloma hochstetteri is illustrated. It is a species native to New Zealand, more recently being found in India too. It grows on the soil of coniferous and deciduous forests. The fruit body is 5-10 cm high and 4 cm in diameter. It is one of the few fungus species of blue colour. It appears on one of the New Zealand banknotes, being a characteristic species for the biodiversity of this country.

On the fifth stamp, with the  face value of Lei 9, the red cage (Clathrus ruber) is represented. It is a species native to Europe, from where it has spread to other continents, and it is rarely found in our country. The fruit body is initially spherical; then its outer membrane cracks, and the fruit body develops in the form of a globular lattice, red in colour, which can reach 20 cm in height. Due to its repulsive smell, it is avoided by people.

On the sixth stamp, with the face value of Lei 10,50, the bamboo mushroom (Phallus indusiatus) is depicted, which is widespread in the tropical regions of South Asia, Africa, North and South America and Australia. The fruit body, which can reach a height of 25 cm, consists of a conical, greenish brown cap, a stalk and a structure called indusium, with the appearance of a net, which covers the stalk. It grows in forests, on fertile soil. It is an edible species; in China it is commercially grown and used in traditional Chinese gastronomy and medicine.

WARNING! Some species of mushrooms are edible, others are very toxic. Among the boletes, for example, there are edible species, while others are poisonous. Do not eat mushrooms picked from the wild unless you are sure that you have identified them correctly, preferably with the help of a person who knows the mushrooms very well.

Romfilatelia thanks the Bucharest Institute of Biology of the Romanian Academy for the documentary support provided to the development of this postage stamps issue. 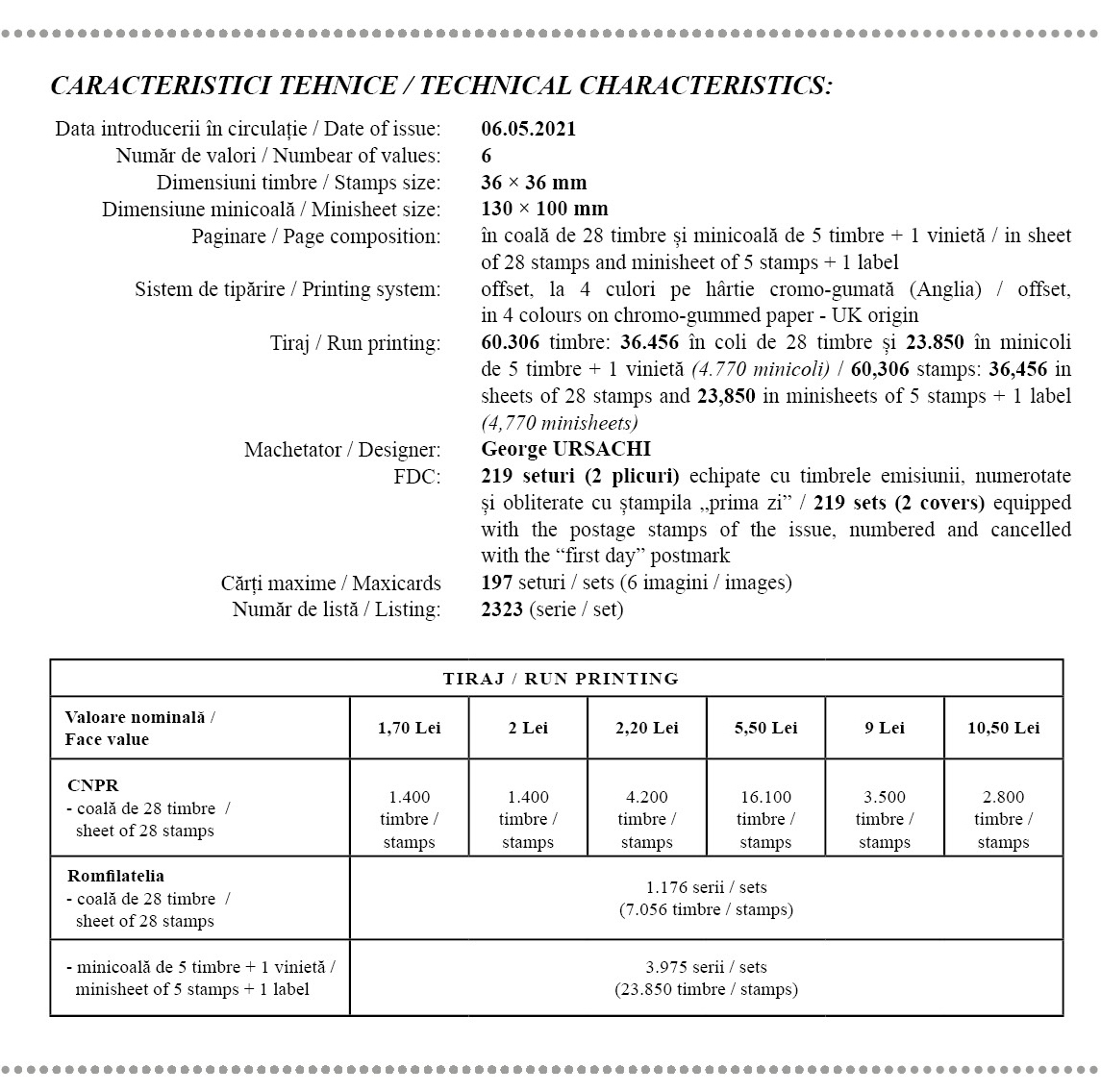