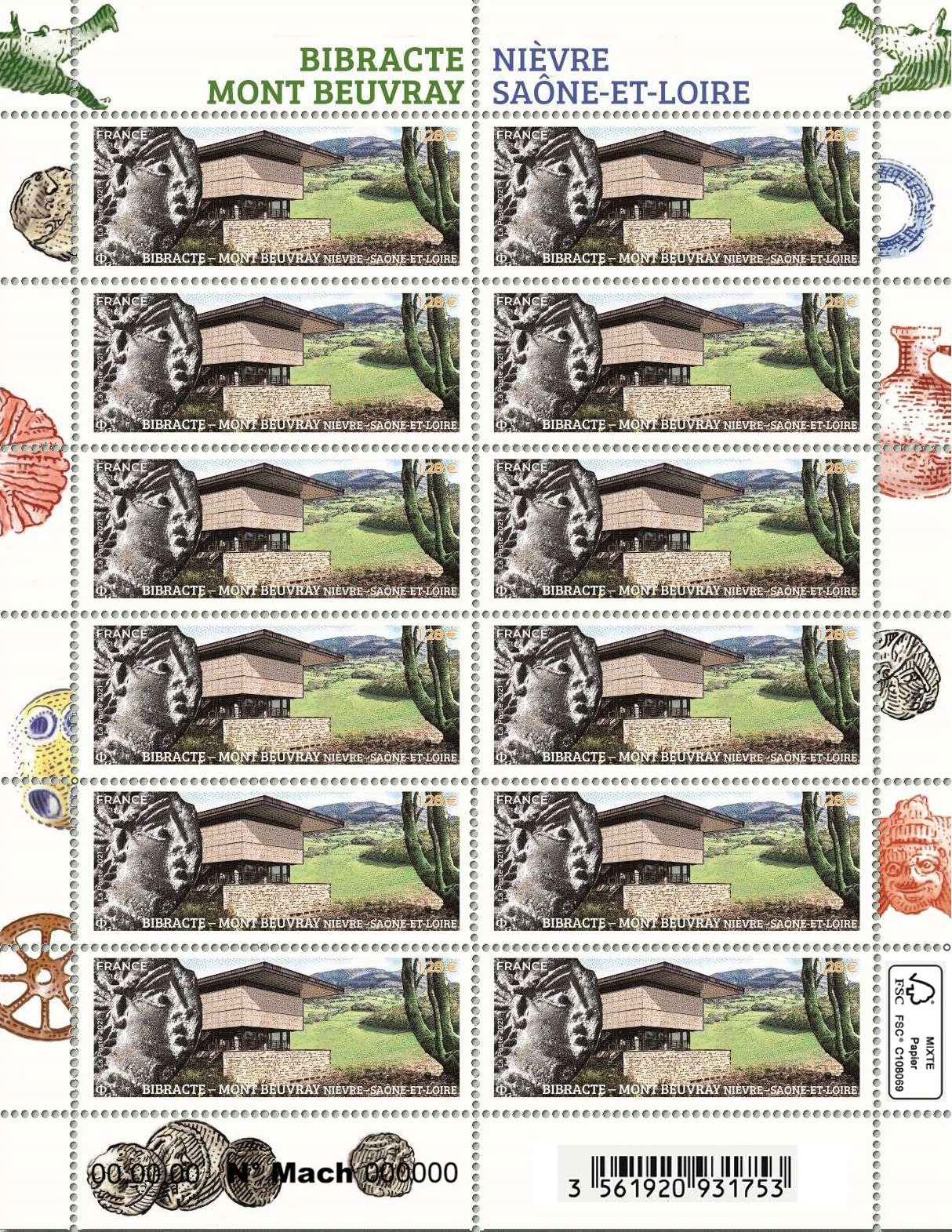 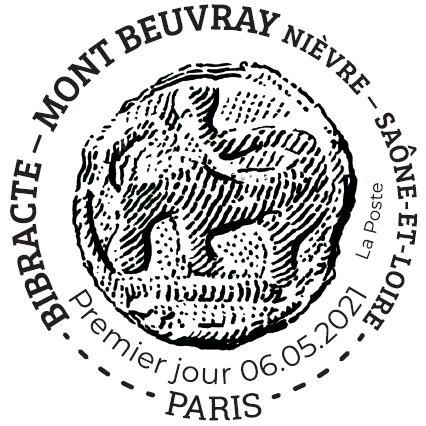 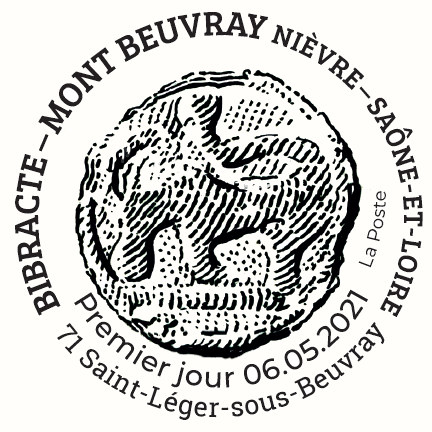 Bibracte, a Gallic oppidum or fortified settlement, was the capital of the Aedui and one of the most important hillforts in Gaul. It was situated near modern Autun in Burgundy, France. The material culture of the Aedui corresponded to the Late Iron Age La Tène culture.

In 58 BC, at the Battle of Bibracte, Julius Caesar’s armies defeated the Helvetii 16 miles south of the fort. In 52 BC, Vercingetorix was proclaimed head of the Gaulish coalition at Bibracte. A few decades after the Roman conquest of Gaul, Bibracte was abandoned in favour of Autun, 25 kilometres away. Once abandoned, Bibracte remained undisturbed and unexamined until discovered by modern archaeology.

Jacques Gabriel Bulliot initiated the first excavations at the site between 1867 and 1895. His nephew Joseph Déchelette, author of a famous Manuel d’Archéologie, continued the excavations between 1897 and 1907.

The modern site known as Mont Beuvray is generally identified as ancient Bibracte. The site straddles the borders of the French départements of Nièvre and Saône-et-Loire in Burgundy. The site is an archaeological park at the centre of a protected forest. It is the focus of cooperative European archaeological efforts, a training ground for young archaeologists, and a centre for interpreting Gaulish culture for a popular audience. Important international excavations have been undertaken at Mont Beuvray by teams from the universities of Sheffield, Kiel, Budapest, Vienna and Leipzig.

On December 12, 2007, the site of Bibracte received the “Great Site of France” Label.

Before the Roman conquest in 52 BC the great Celtic city of Bibracte had more than thirty thousand inhabitants. protected by a huge stone wall of the Murus Gallicus type enclosing an area of 135 hectares. 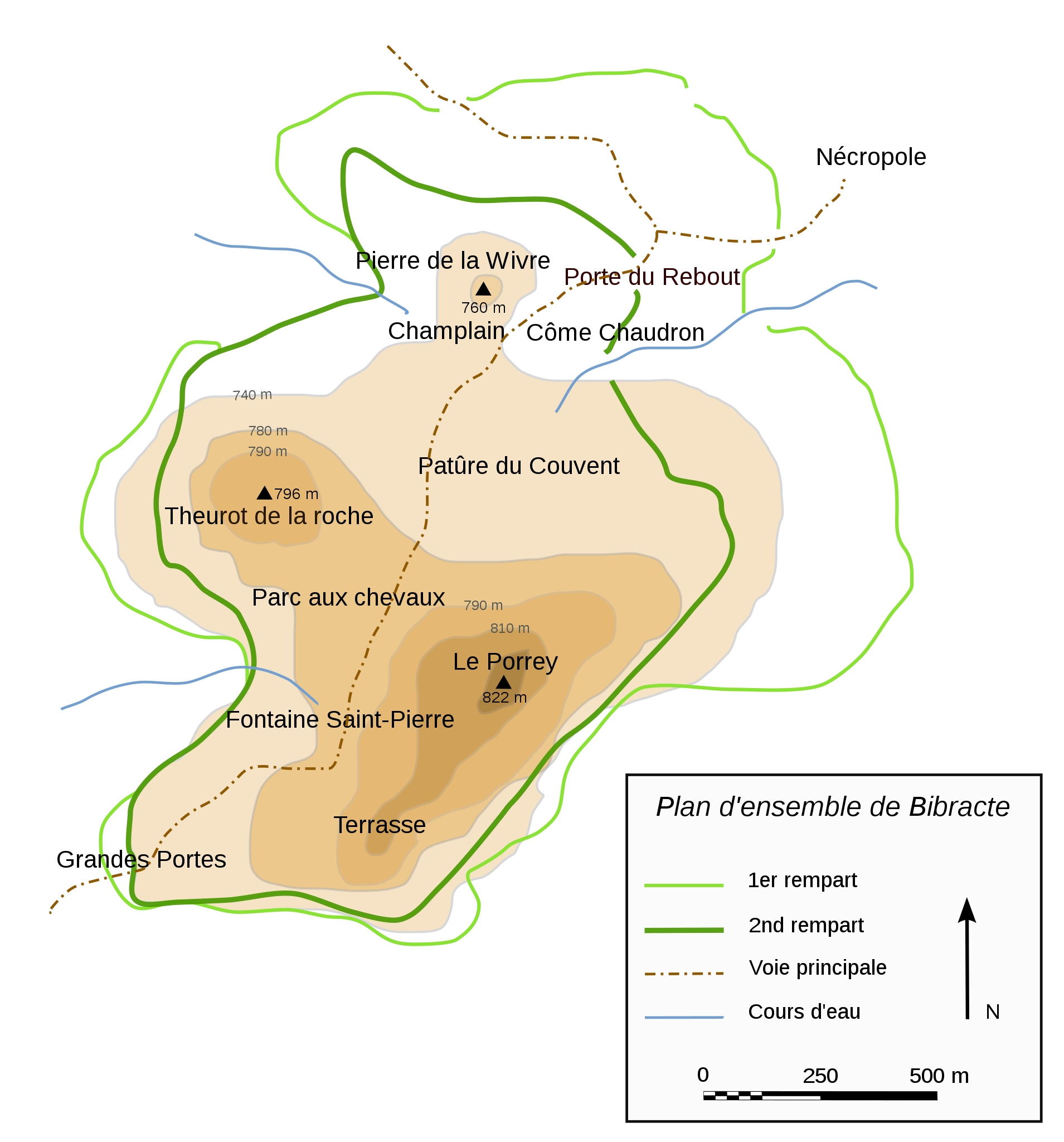 Bibracte is mentioned only twice in Roman sources. The first mention of Bibracte is found in Julius Caesar’s Commentaries on the Gallic War in the year 58 BCE. It was mentioned again in 52 BCE, when he was questioning the intentions of his Aedui allies, who had joined the revolt and crowned Vercingetorix king of the Gauls at Bibracte. Inscriptions from the era announced that the capital of the Aedui received the name Augustodunum (the citadel of Augustus) during the reign of Augustus, which gave rise to the current Autun.

Starting in the 16th century, a passion for local history arose among scholars, aristocrats, and clergy, which led to the question of the location of Bibracte. One theory placed Bibracte at Autun: the Gallic city at the site of the Gallo-Roman city. Another placed it at Beaune and was defended by the scholar Hugues de Salins. A third located the city on the slopes of Beuvrect or Bevrect, today known as Mont Beuvray. This last theory was based on three major arguments. First, there is a connection between the names Bibracte and Beuvrect. Second, medieval chronicles situated the city at Beuvrect. This was reinforced by the existence of an annual fair on the first Wednesday, Thursday, and Friday of May, the age of which is attested to in texts from the 13th century. Finally, the discovery of pottery, coins, and the observations of the priest of Saint-Léger-sous-Beuvray in 1725 supported it.

Generally, the Autun hypothesis received the greatest approval at first. Moreover, Autun was renamed Bibracte after the French Revolution and remained so for some time. Only the research of Jacques Gabriel Bulliot in the 19th century shifted scholarly opinion in favor of Mont Beuvray. In 1851, Bulliot communicated with the Congress of the French Society of Archeology about an ancient chapel (the Saint Martin chapel on Mont Beuvray) established to Christianize the Aedui. He also returned to Mont Beuvray to take more notes. He discovered what he thought was the embankment of a Roman camp (actually a nemeton) at the summit of Mont Beuvray next to the chapel. He documented it and considered placing Bibracte at Mont Beuvray instead of Autun, contrary to the unanimous opinion of the Aedui Society. The publication of his Essay on the Roman System of Defense in the Aedui country between the Saône and the Loire, in which he revealed his convictions, was not taken seriously by the members of the Society of Archeology.

Emperor Napoleon III took an interest in the battles of the Gallic Wars and an officer named Stoffel, charged by the Emperor with conducting investigations of the Roman victory over the Helvetii, visited Bulliot, who shared with him his opinions about the location of Bibracte. Stoffel was not interested, but he commissioned Xavier Garenne, another member of the Aedui Society, to make a survey of Mont Beavray. At the same time, the Viscount of Aboville, the owner of the land, conducted research and shared it with the Archbishop of Reims, who was a member of the Aedui Society and a friend of Bulliot, though he did not share Bulliot’s theory about the location of Bibracte. Interested by these investigations, the Archbishop shared the various findings with the Emperor who, in 1867, assigned Bulliot to do research at Mont Beavray and funded his work.

Bulliot excavated the site from 1867 to 1905, removing all doubt about the location of Bibracte. His nephew Joseph Déchelette, whom he introduced to excavation, continued the work until 1907, comparing Bibracte to other sites in Europe such as Stradonice in Bohemia, the Manching in Germany and Velem-Zenst-Vid in Hungary, which were precursors of the cultural unification of the Celtic world and of the civilization of oppida.

The site hosts the Museum of Celtic Civilization, constructed by Pierre-Louis Faloci and opened to the public in 1996. Pierre-Louis Faloci is also the architect of Bibracte’s Center of European Archeological Research, which was opened in 1994. The architectural design corresponds to the evolution of the ages of humanities: it has a base of carved stone, walls of polished pradesh, and a metal roof. One of the facades, which are large picture windows, is hidden by a wall of pradesh (on the valley side), while that which faces the site allows free view to the visitors. The museum has few proper collections, as many of those exhibited are loaned from other museum. During some years, the Coligny calendar and the Gundestrup cauldron can be seen there.

The 2000 square meters of the exhibit in the museum are laid out over two stages. The first stage (and the first in the tour) recounts the discovery of the site and the place of Bibracte in the global context of the European Celtic culture. The majority of the following subjects are covered: war, the age of oppida, Mediterranean commerce, and agriculture. The ground floor, which consists of several alcoves, recounts the life of the Aedui at Bibracte. Objects of daily life, jewelry, funereal urns, and artisanal workshops are reconstructed or exhibited there.

Located four kilometers from Mont Beuvray, in the commune of Glux-en-Glenne (Nièvre), is one of the most important libraries on the Celtic world, regularly funded by European researchers who take their counterparts there. There is also an archeological depot there, the administration of the archeological park, several technical establishments, a lecture hall, and, in the village, a dining hall and several gîtes. In this center, archeologists, students, and researchers congregate from all over Europe to excavate the site of Bibracte. In several months[when?], the research center will expand to accommodate the regional center for preservation of relics and archeological collections, becoming the reference center of Burgundy in this field.