Or, in Spanish, ¡Feliz Cinco de mayo! (months are not capitalized in Spanish).

I was born in Texas and spent many years in the U.S. state of New Mexico and I miss the predominately Mexican culture of the region (not to mention the food). When Cinco de Mayo comes around each year, I really start craving tacos, carne de asada, enchiladas and the sound of mariachi invades my thoughts.

It is also a perfect time to share a couple of covers — one from the U.S. and one from Mexico — that portray the same basic design.  The United States cover is actually a reissue from a year after the original release. The original stamps, issued on the same date in 1998 is called a “joint issue” in the stamp collecting community.

But before we get to the covers, let me offer a brief explanation of what exactly these stamps commemorate. 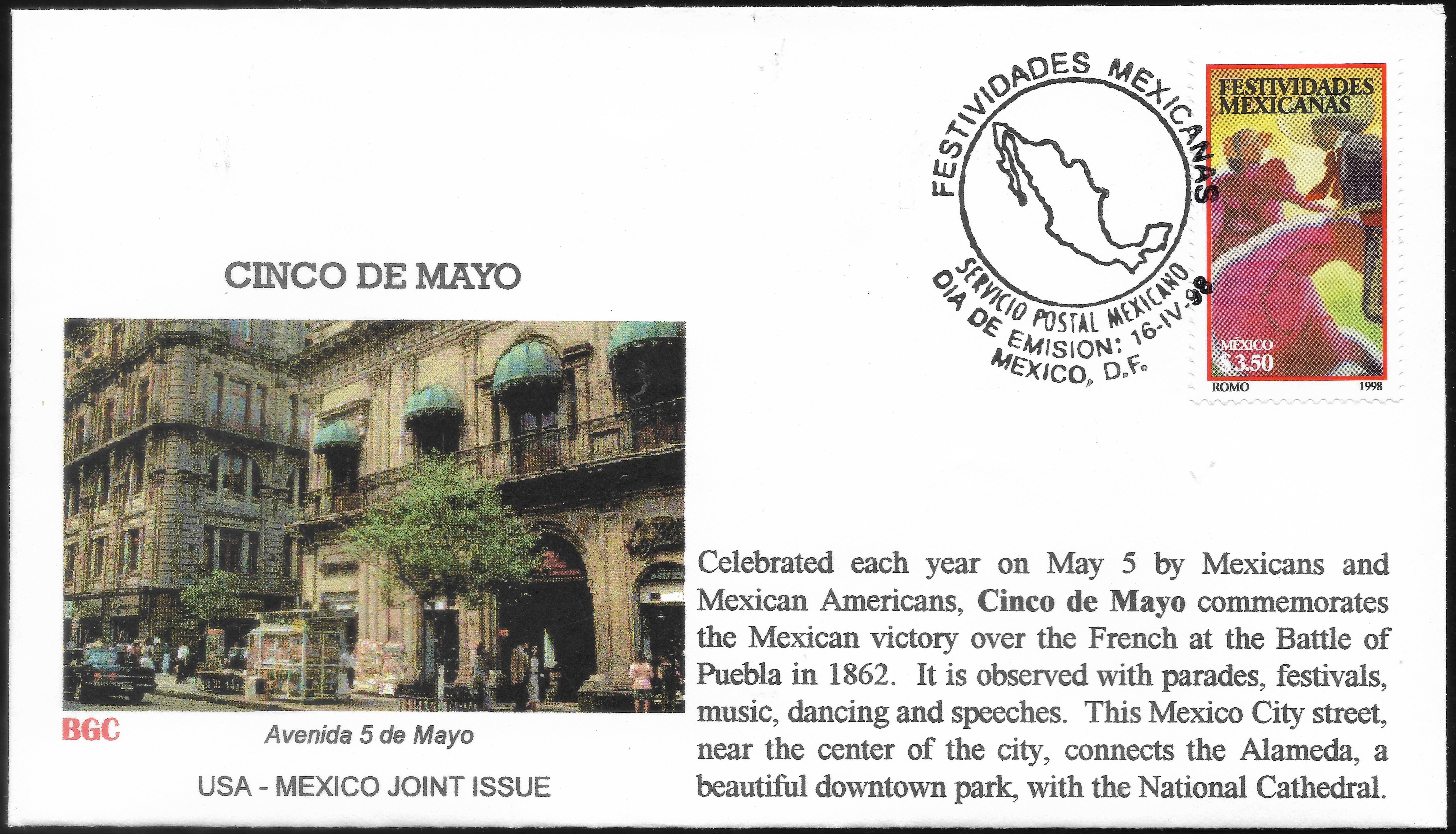 Cinco de Mayo (pronounced /siŋko̞ ðe̞ ˈma̠ʝo̞/ in Mexico, Spanish for “Fifth of May”) is an annual celebration held on 5 May. The date is observed to commemorate the Mexican Army’s victory over the French Empire at the Battle of Puebla, on 5 May 1862, under the leadership of General Ignacio Zaragoza. The victory of the smaller Mexican force against a larger French force was a morale boost for the Mexicans. Zaragoza died months after the battle due to illness. A year after the battle, a larger French force defeated the Mexican army at the Second Battle of Puebla, and Mexico City soon fell to the invaders.

More popularly celebrated in the United States than in Mexico, the date has become associated with the celebration of Mexican-American culture. These celebrations began in California, where they have been observed annually since 1863. The day gained nationwide popularity in the 1980s thanks especially to advertising campaigns by beer and wine companies. Today, Cinco de Mayo generates beer sales on par with the Super Bowl. In Mexico, the commemoration of the battle continues to be mostly ceremonial, such as through military parades or battle reenactments. The city of Puebla marks the event with an arts festival, a festival of local cuisine, and re-enactments of the battle.

Cinco de Mayo is sometimes mistaken for Mexico’s Independence Day — the most important national holiday in Mexico — which is celebrated on September 16, commemorating the Cry of Dolores, which, in 1810, initiated the war of Mexican independence from Spain.

If you would like to learn more about the Battle of Pueblo and the history and celebrations of the holiday that honors it, I wrote a very lengthy (and well-illustrated) article about the topic on A Stamp A Day on this date in 2019. Have a look and let me know what you think in the comments below. 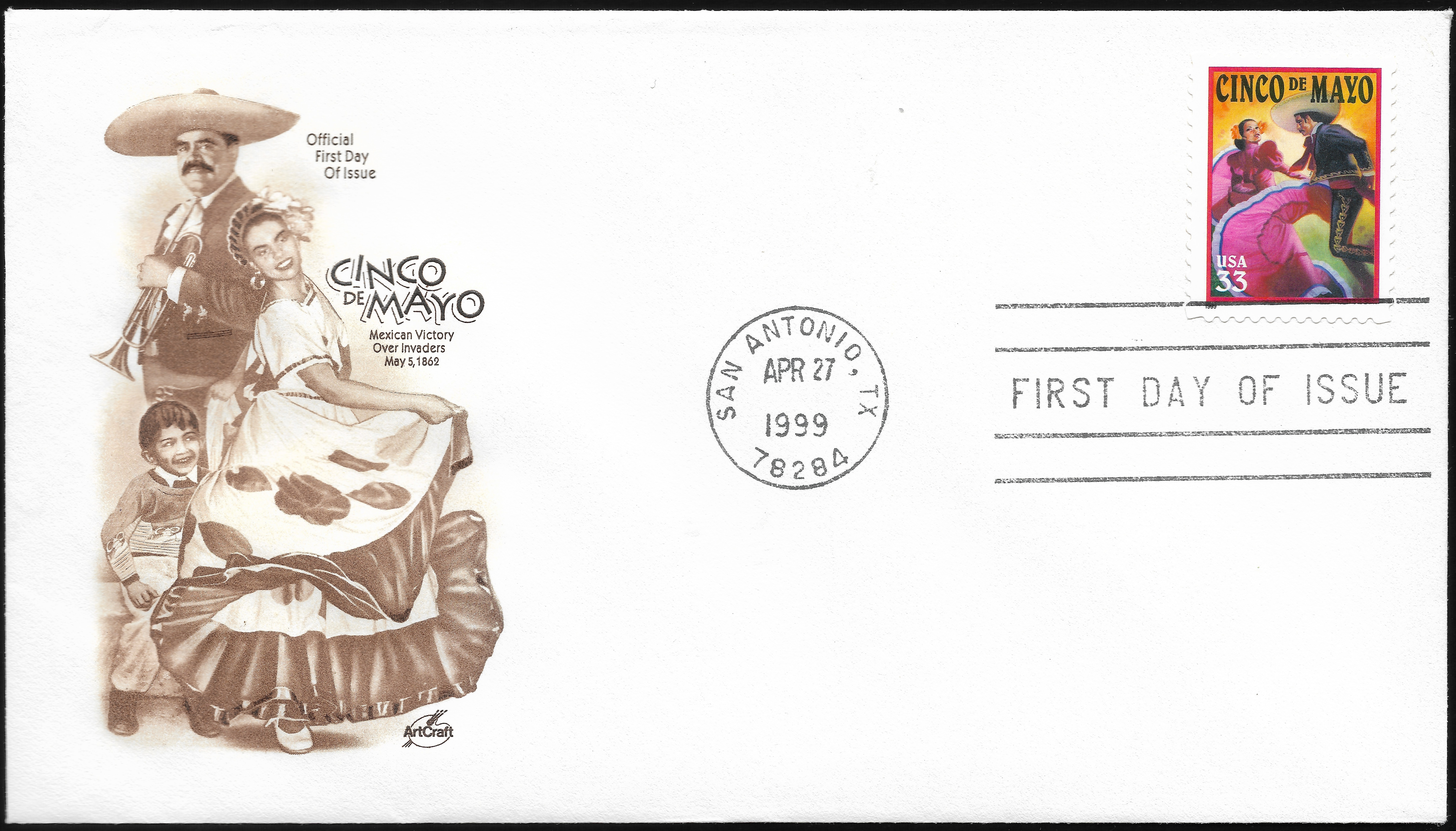 The stamps featured on today’s TWO covers were both originally issued on 16 April 1998. The Mexican and the United States stamps each utilized the same design but they differed in size and in the inscription. Mexico’s stamp (Scott #2066) reads Festividades Mexicanas, which translates to “Mexican Festivities” in English, while the U.S. stamp (Scott #3203) reads Cinco de Mayo. This was the first U.S. Postal Service release in its Holiday Traditions series to venture beyond the winter season. The painting of a couple dancing was created by Robert Rodriguez of Pasadena, California, and was his first design to grace a postage stamp.

The dual first day ceremony was held for both stamps in San Antonio, Texas. The Mexican stamp bears a denomination of 3.50 pesos while the 1998 U.S. stamp was denominated 32 cents and was printed using the photogravure process by Stamp Venturers. The self-adhesive U.S. stamp has serpentine die cuts measuring 11.7 by 10.9. It was re-issued at San Antonio on 27 April 1999, this time offset printed by the Banknote Corporation of America and denominated 33 cents with serpentine die cut perforations of 11.6×11.3 (Scott #3309).

The Mexican cover features an unofficial cachet and a black cancellation (I am not sure, but I think all official first day covers in Mexico receive a magenta postmark). The cachet features a photo of Avenida 5 de May in the center of Puebla. The U.S. cover is for the 1999 reissue and includes an ArtCraft steel-engraved cachet printed in sepia.