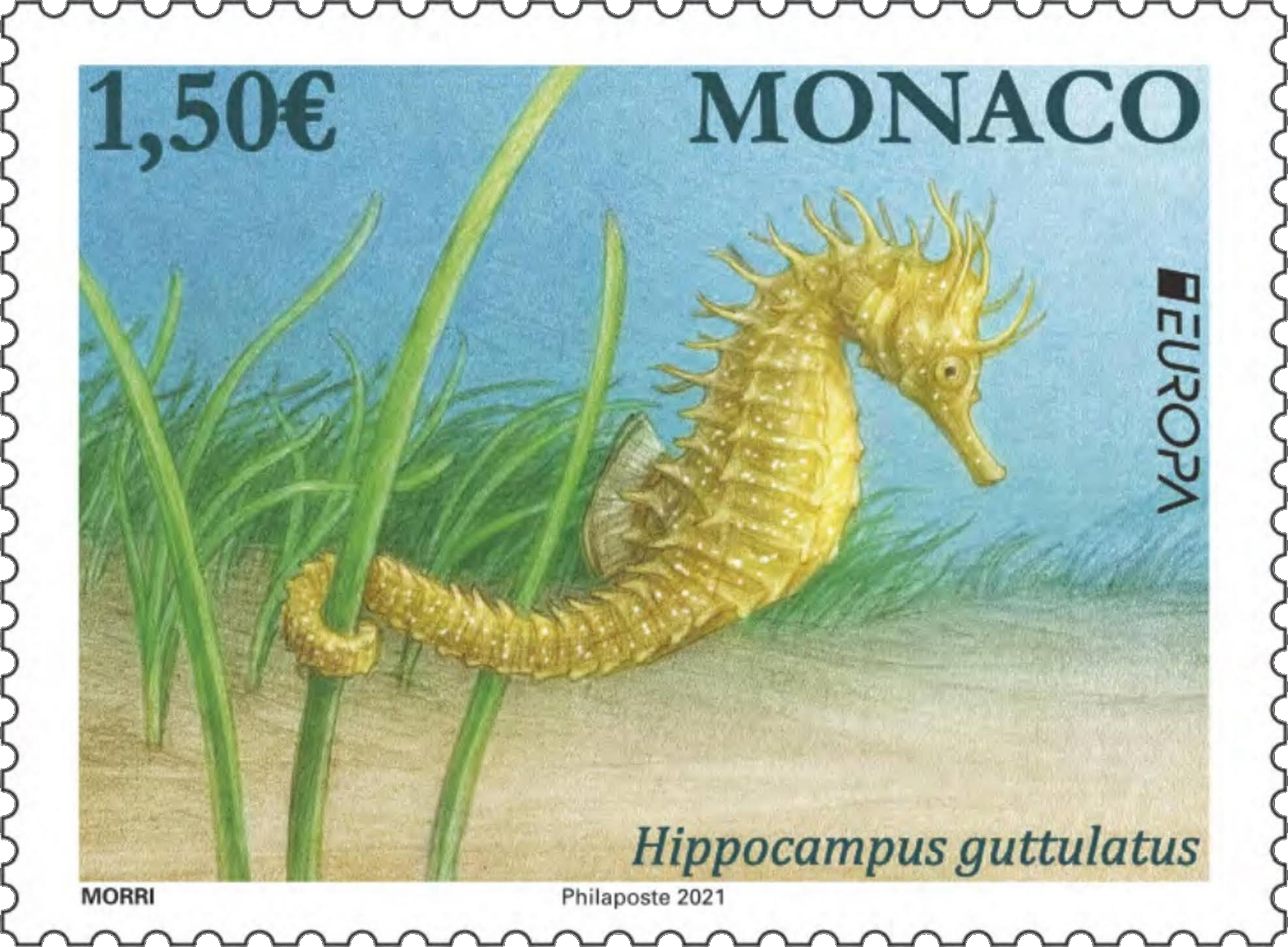 Europa stamps are among the most collected stamps in the world. This year, PostEurop has chosen to highlight “endangered national wildlife”. The stamp represents the long-snouted seahorse, Hippocampus guttulatus, recognizable by the shape of its elongated snout and its body covered with filaments. Seahorses are mainly threatened by habitat loss and degradation caused by coastal development and destructive fishing gear.

This issue will be on sale at the “Office des Timbres”, the “Musée des Timbres et des Monnaies”, the post offices and philatelic counters of the Principality, the Monaco stamp-dealers as well as the “Carré d’Encre” in Paris, France. It will be included, with other values, in the 2nd Part of the philatelic programme 2021 and offered to our subscribers and customers. 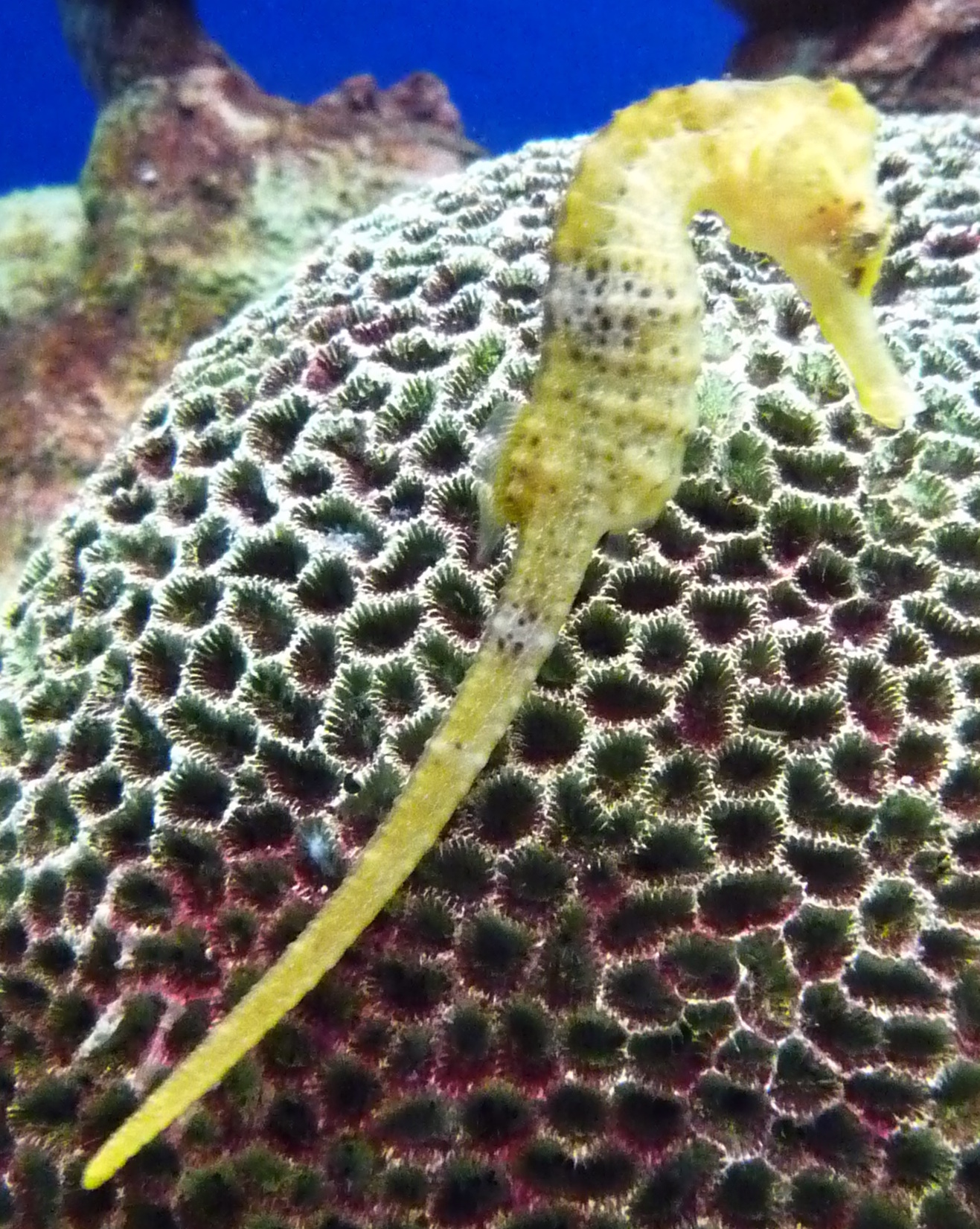 Hippocampus guttulatus, commonly known as the long-snouted seahorse and in Great Britain as the spiny seahorse, is a marine fish belonging to the family Syngnathidae, native from the northeast Atlantic, including the Mediterranean.
The long-snouted seahorse is a small-sized fish that can reach a maximum length of 21.5 cm but the average size is more or less 12 cm. The body is slender, the snout is long and the tail is prehensile. Its head and dorsal ridge have often some more or less long and numerous dermal filaments which can be simple or bifid. Its color ranges from dark green to different variants of brown to yellow, the body is often speckled with small white dots.

The long-snouted seahorse is widespread throughout the temperate waters of the eastern Atlantic Ocean from the south coast of the United Kingdom to the Netherlands and south to Morocco, including the Canary Islands, the Azores and Madeira and the Mediterranean Sea.

This seahorse likes shallow coastal waters from 1 to 20 m deep. It occurs close by Posidonia and eelgrass meadows or in mixed habitat with sandy bottom and rocks with algae.

The long-snouted seahorse has a carnivorous diet and feeds on small crustaceans, larvae, fish eggs and other planktonic organisms. It is ovoviviparous and it is the male who broods the eggs in its ventral brood pouch. The latter includes villi rich in capillaries that surround each fertilized egg creating a sort of placenta supplying the embryos. When fully grown, pups will be expelled from the pocket and evolve in complete autonomy.

The long-snouted seahorse is relatively rare and limited data exist on its population and about the volume and the impact of trade for the traditional Chinese medicine and for the aquarium, thus the species is considered as “Data Deficient” on the IUCN Red List. Internationally, it is also listed in Appendix II of the Convention on International Trade in Endangered Species of Wild Fauna and Flora (CITES) this means that it is on the list of species not necessarily threatened with extinction, but in which trade must be controlled in order to avoid utilization incompatible with their survival.