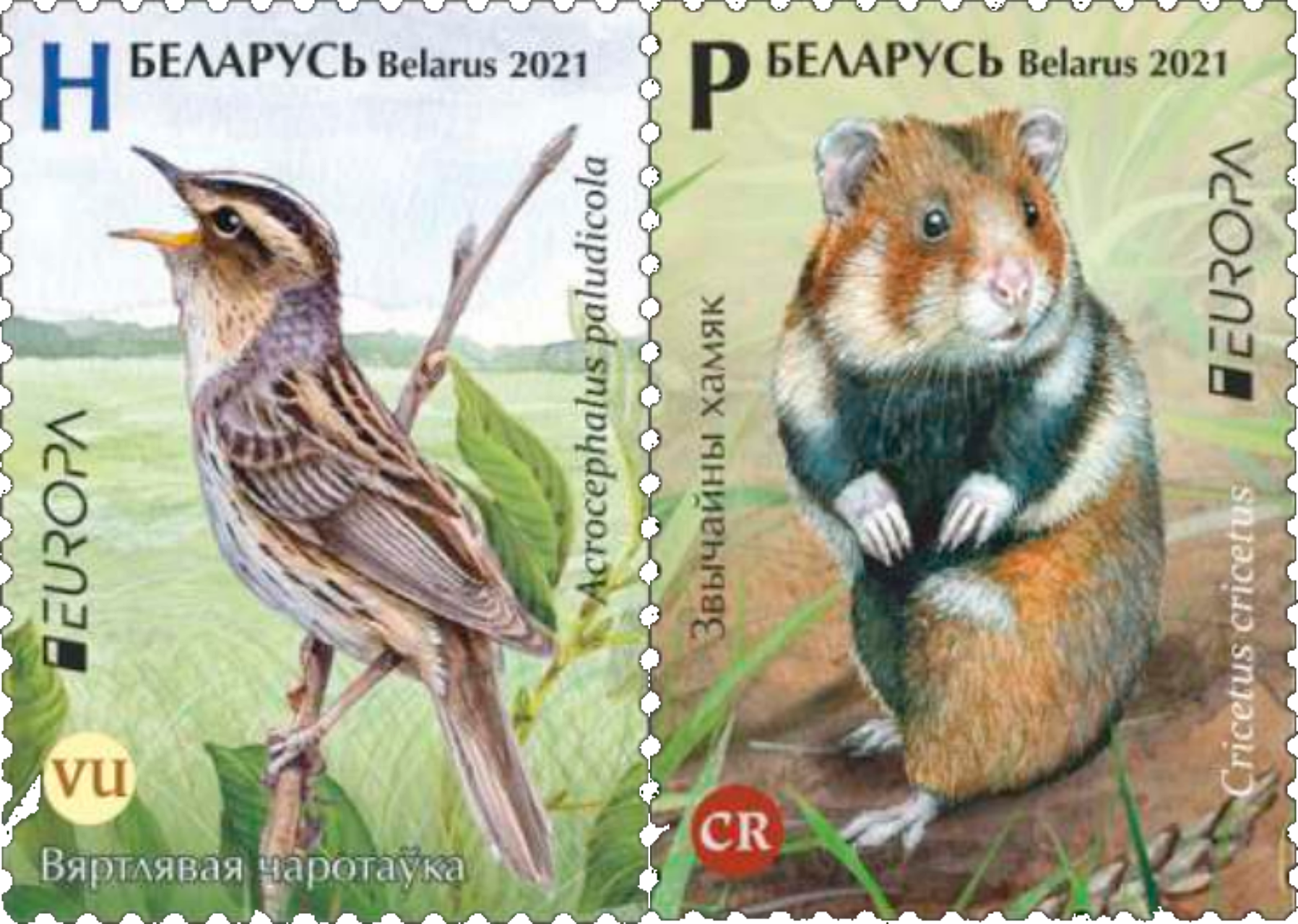 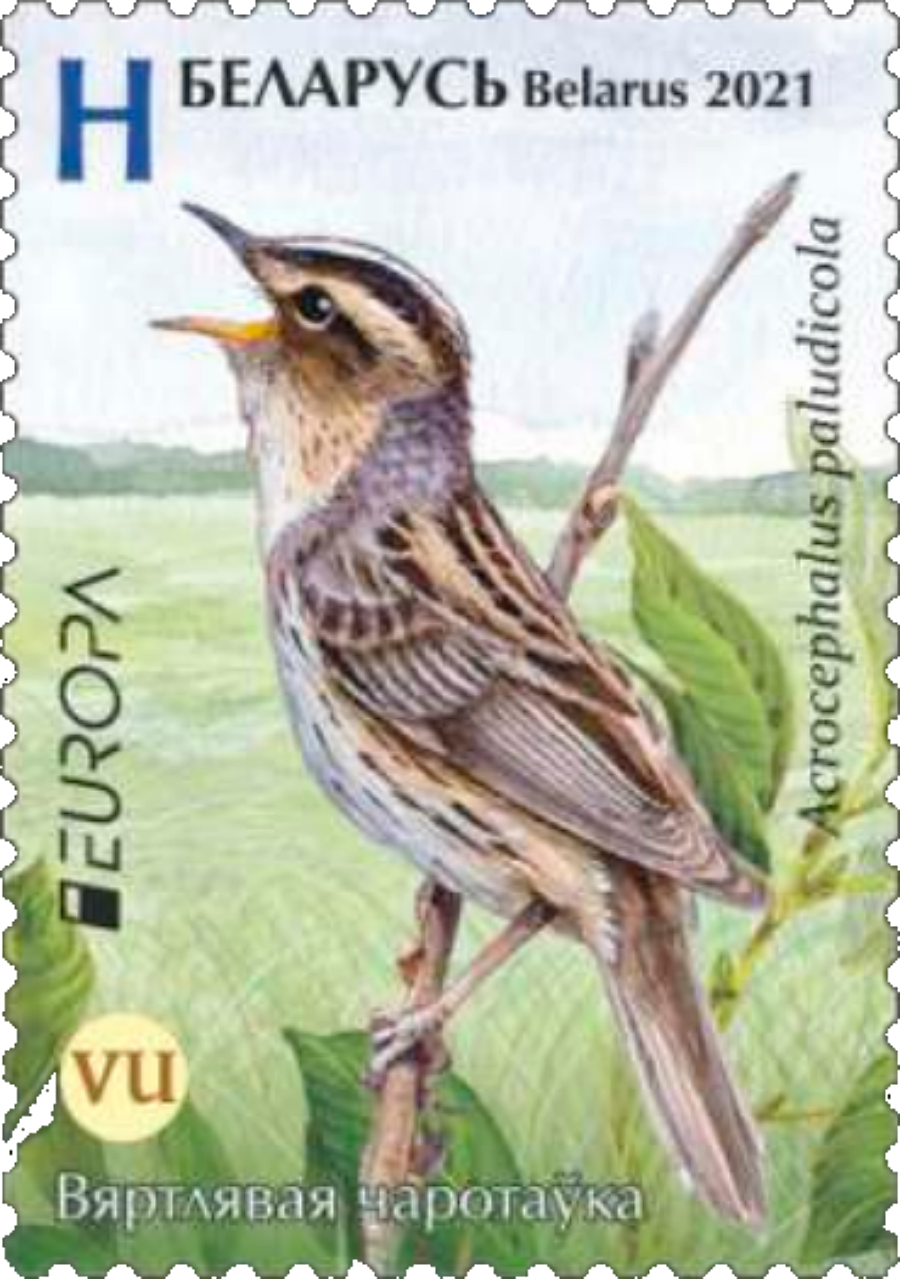 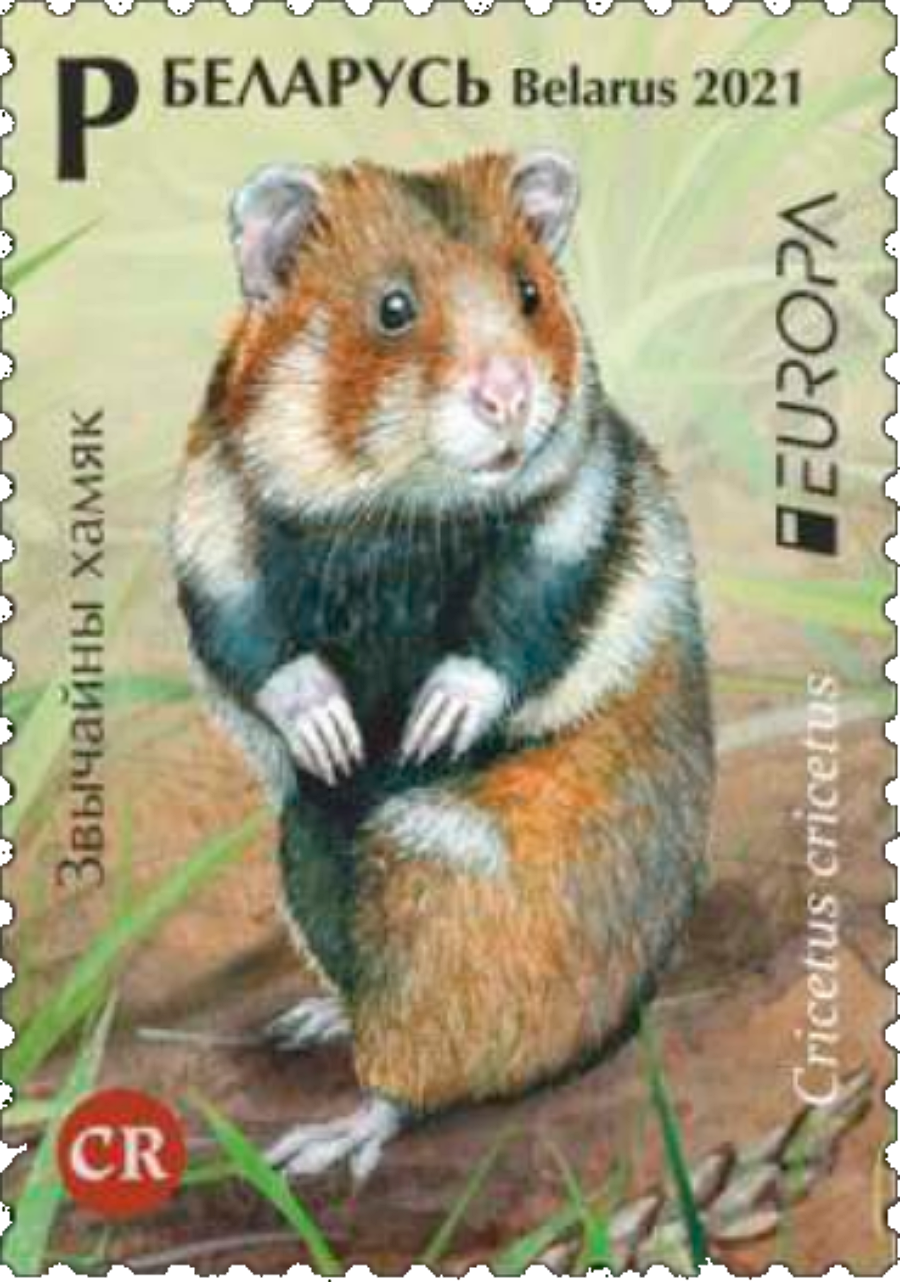 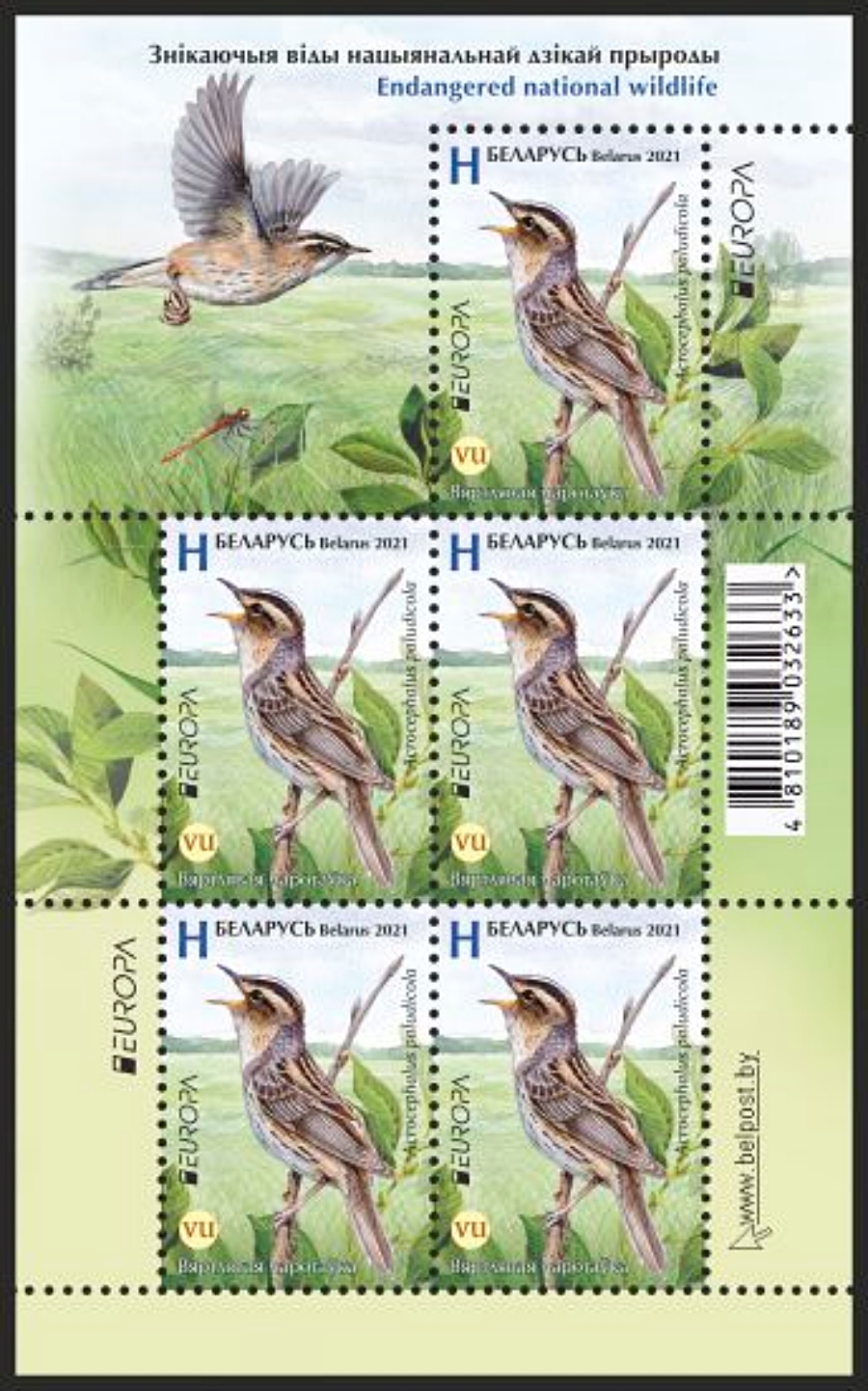 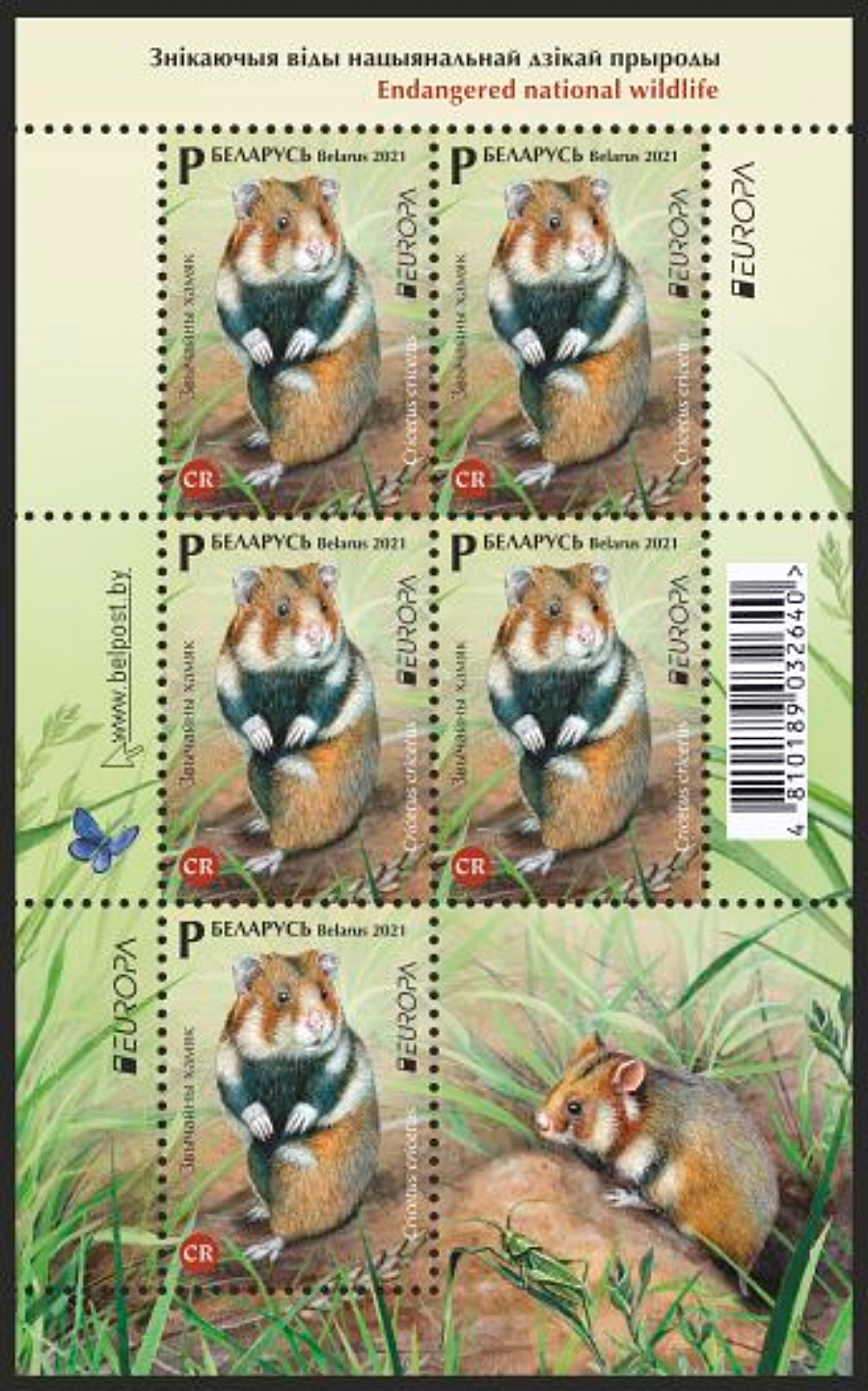 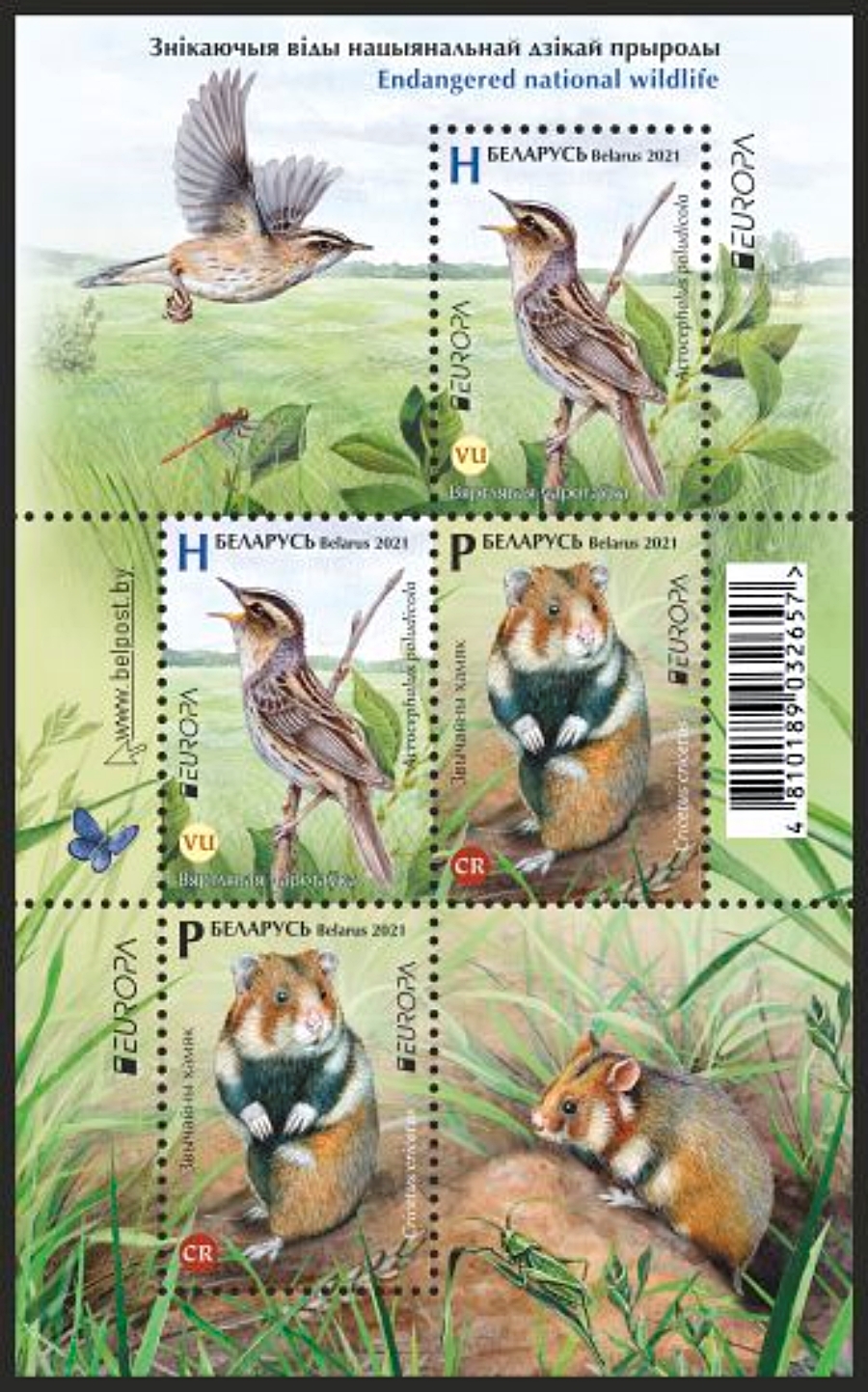 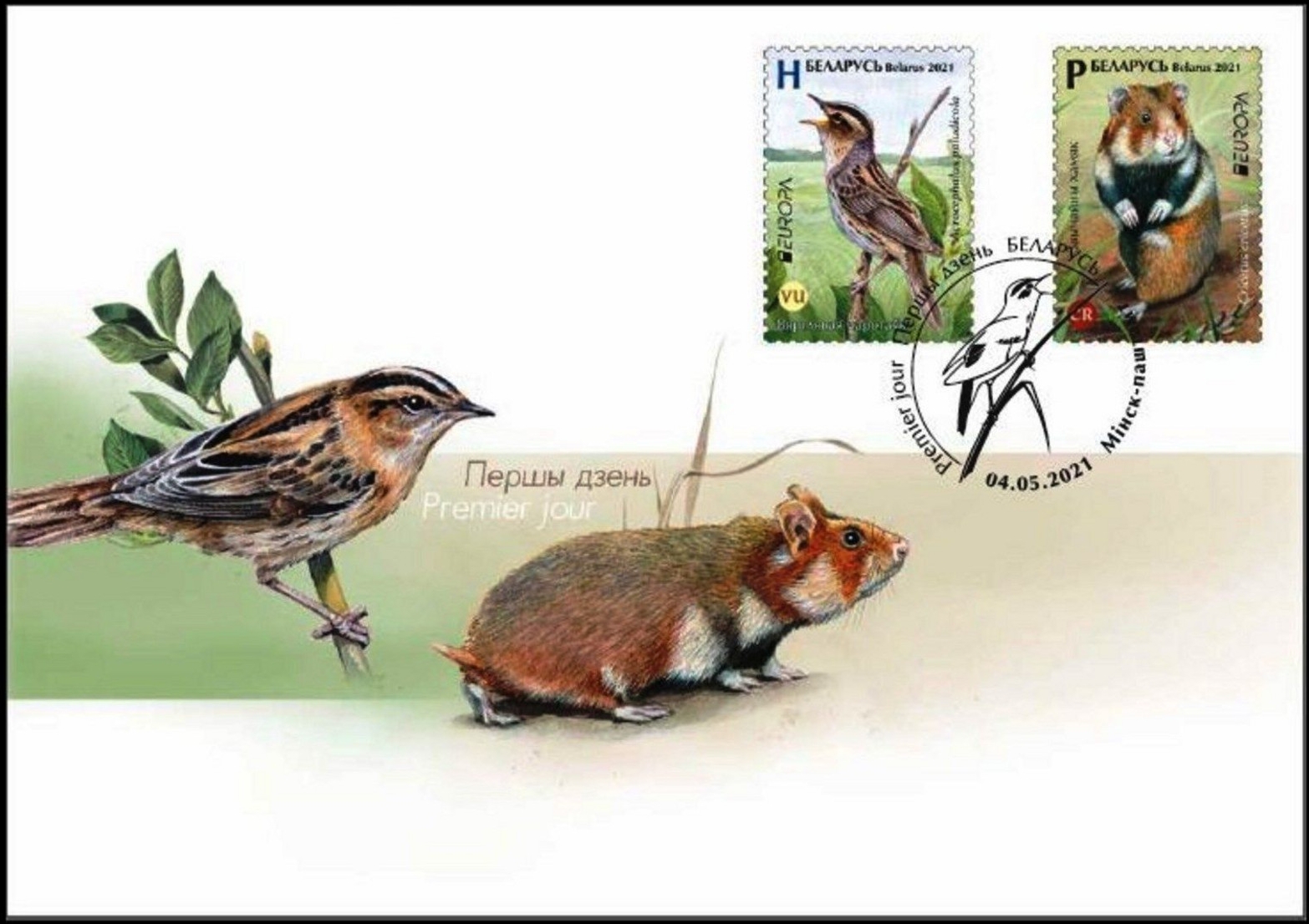 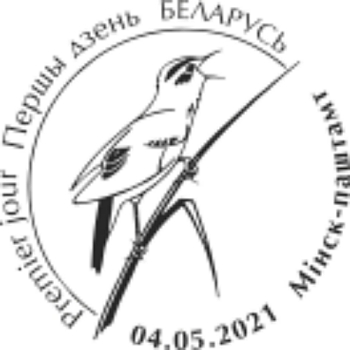 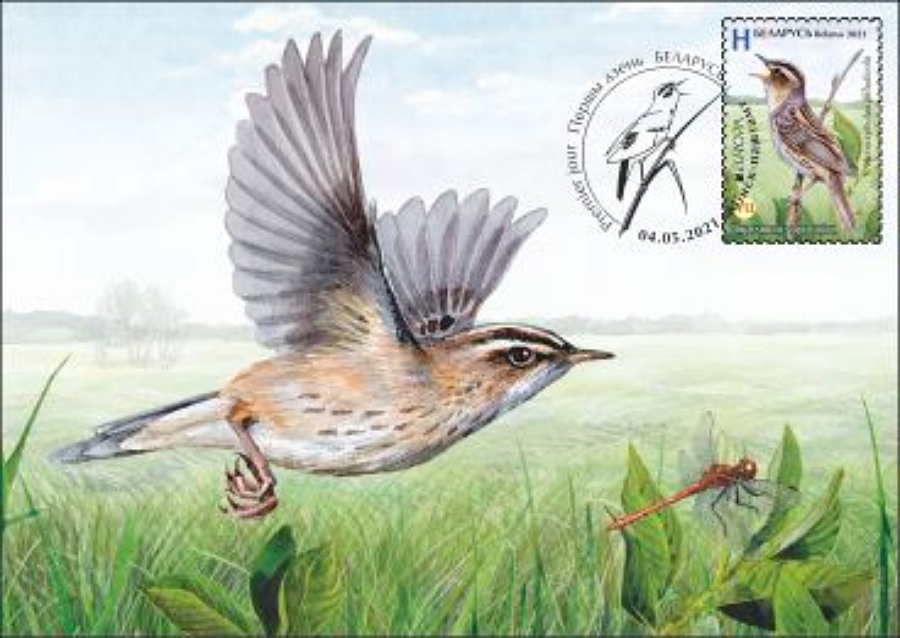 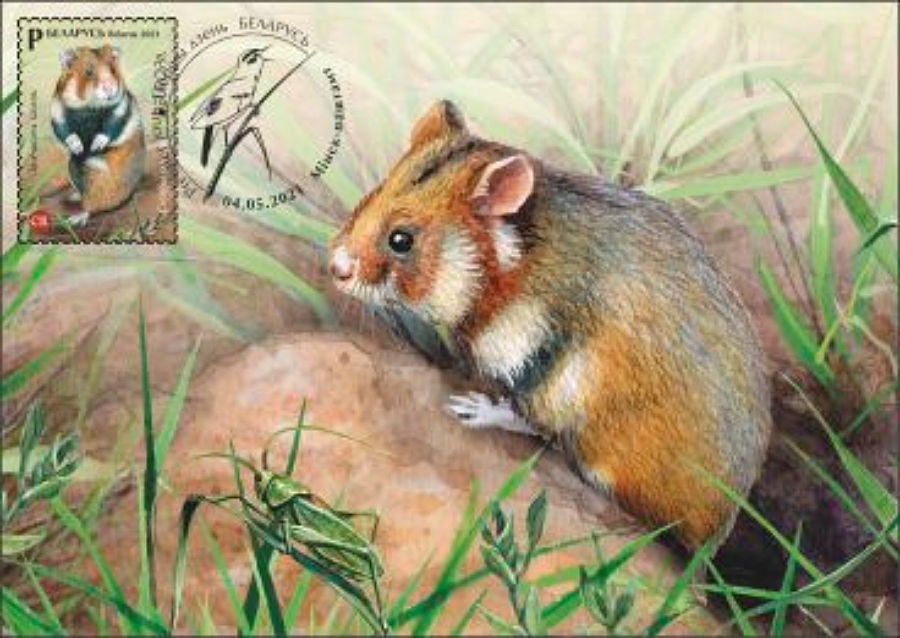 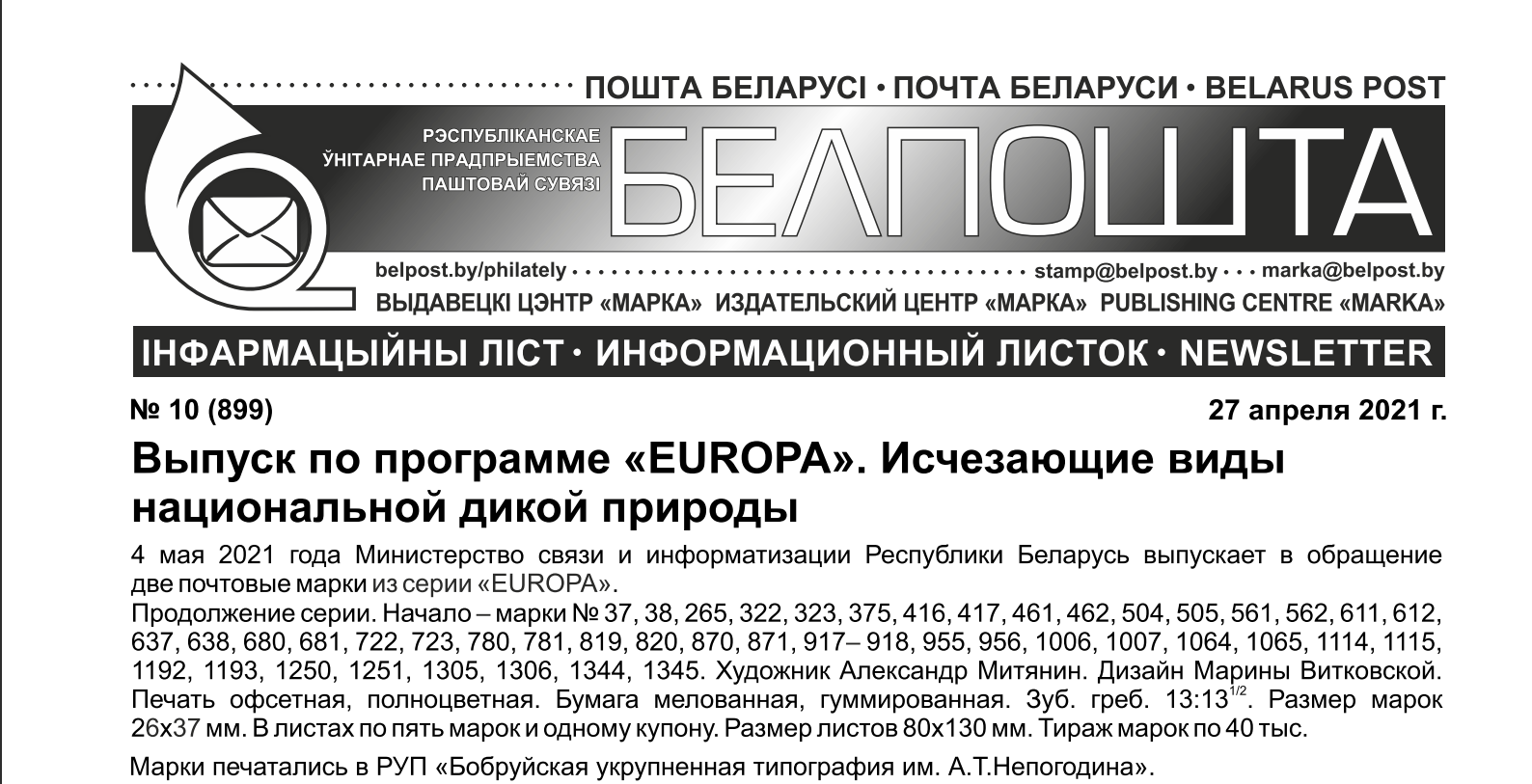 On May 4, 2021 the Ministry of Communications and Informatization of the Republic of Belarus will issue 2 stamps “Endangered national wildlife” bearing the EUROPA logo.

Face value H is equal to the surface tariff of a letter up to 20 gram abroad.

Face value P is equal to the air-mail tariff of a letter up to 20 gram abroad.

The species presented on the stamps are included in the Red Book of the Republic of Belarus.

Aquatic warbler is a migratory species. It inhabits only open sedge lowland swamps. The aquatic warbler builds nest in Belarus, Hungary, Germany, Lithuania, Poland, Russia and Ukraine. The center of the modern area is the Polesian lowland. It appears in late April or early May and flies away in August.

European hamster is a large rodent with a beautiful variegated color. The rodent has been assigned the highest conservation status for wild populations. This is the status of critically endangered species.

A few decades ago, the European hamster was so widespread that it was considered a dangerous pest of agriculture and was subject to destruction. This led to a sharp decline in its numbers.

Special postmark and FDC painted by A.Mityanin, designed by M.Vitkovskaya.

A special cancellation on FDC will be carried out at the Main Post Office of Minsk on the stamps issuing day.

The aquatic warbler (Acrocephalus paludicola) is an Old World warbler in the genus Acrocephalus. It breeds in temperate eastern Europe and western Asia, with an estimated population of 11,000-15,000 pairs. It is migratory, wintering in west Africa. After many years of uncertainty, the wintering grounds of much of the European population were finally discovered in Djoudj National Bird Sanctuary, Senegal, with between 5,000 and 10,000 birds present at this single site. Its south-westerly migration route means that it is regular on passage as far west as Great Britain and Ireland.

This small passerine bird is a species found in wet sedge beds with vegetation shorter than 30 cm. Drainage has meant that this species has declined, and its stronghold is now the Polesie region of eastern Poland and south Belarus, where 70% of the world’s population breeds. 3-5 eggs are laid in a nest in low vegetation. This species is highly promiscuous, with most males and females having offspring with multiple partners.

This is a medium-sized warbler. The adult has a heavily streaked brown back and pale underparts with variable streaking. The forehead is flattened, there is a prominent whitish supercilium and crown stripe and the bill is strong and pointed.

It can be confused with juvenile sedge warbler, which may show a crown stripe, but the marking is stronger in this species, which appears paler and spiky-tailed in flight. The sexes are identical, as with most warblers, but young birds are unstreaked on the breast below. Like most warblers, it is insectivorous, but will take other small food items, including berries.

The song is a fast, chattering ja-ja-ja punctuated with typically acrocephaline whistles.

The genus name Acrocephalus is from Ancient Greek akros, “highest”, and kephale, “head”. It is possible that Naumann and Naumann thought akros meant “sharp-pointed”. The specific paludicola is Latin, from paludis, “swamp”, and colere, “to inhabit”.

The European hamster (Cricetus cricetus), also known as the Eurasian hamster, black-bellied hamster or common hamster, is the only species of the genus Cricetus. It is native to grassland and similar habitats in a large part of Eurasia, extending from Belgium to the Altai mountains and Yenisey River in Russia. Where abundant the animal is considered a farmland pest, and historically it has also been trapped for its fur. It has declined drastically in recent years and is considered critically endangered.