The period from early May to early June usually gets me thinking about the Second World War, particularly the European theatre (although my only known relatives to have fought in World War II were both in the U.S. Navy’s Pacific Fleet). With the anniversaries of VE Day and D-Day both bringing reminders in the form of commemorative stamps on a regular basis particularly this time of year, I usually re-watch some of the movies set during the era — movies that I grew up watching and which remain my favorites to this day (a quick Top Four would be The Great Escape, Patton, Saving Private Ryan, and A Bridge Too Far).

I really do not have a lot of philatelic material associated with the War — given the huge amount of stamps issued for the 75th anniversary of Victory in Europe last May (and a tiny handful of VJ stamps in September), I did not buy a single one although I may give in and seek out a few. I have, however, long collected various occupation stamps of the 1939-1946 period (particularly those of the Channel Islands) and am a third of the way through an excellent book about how various European nations and territories used stamps as war propaganda. I also have a few scattered covers, mostly German, that were commercially mailed or created by stamp collectors during the era. I will share a few items that I find interesting over the next few weeks.

I am not a specialist in much of the material I will present so please feel free to correct me when I get details wrong or to provide more information. That is what that Comment box below is intended for! I also should point out that I am not a scholar of World War II — most of what I know comes from brief accounts read over the years (some of which were well-written historical novels such as Steve Berry’s latest, The Kaiser’s Web) and from documentaries or movies. I do have a stack of history books on various aspects of the war but I have never read any of them. Maybe some day…. 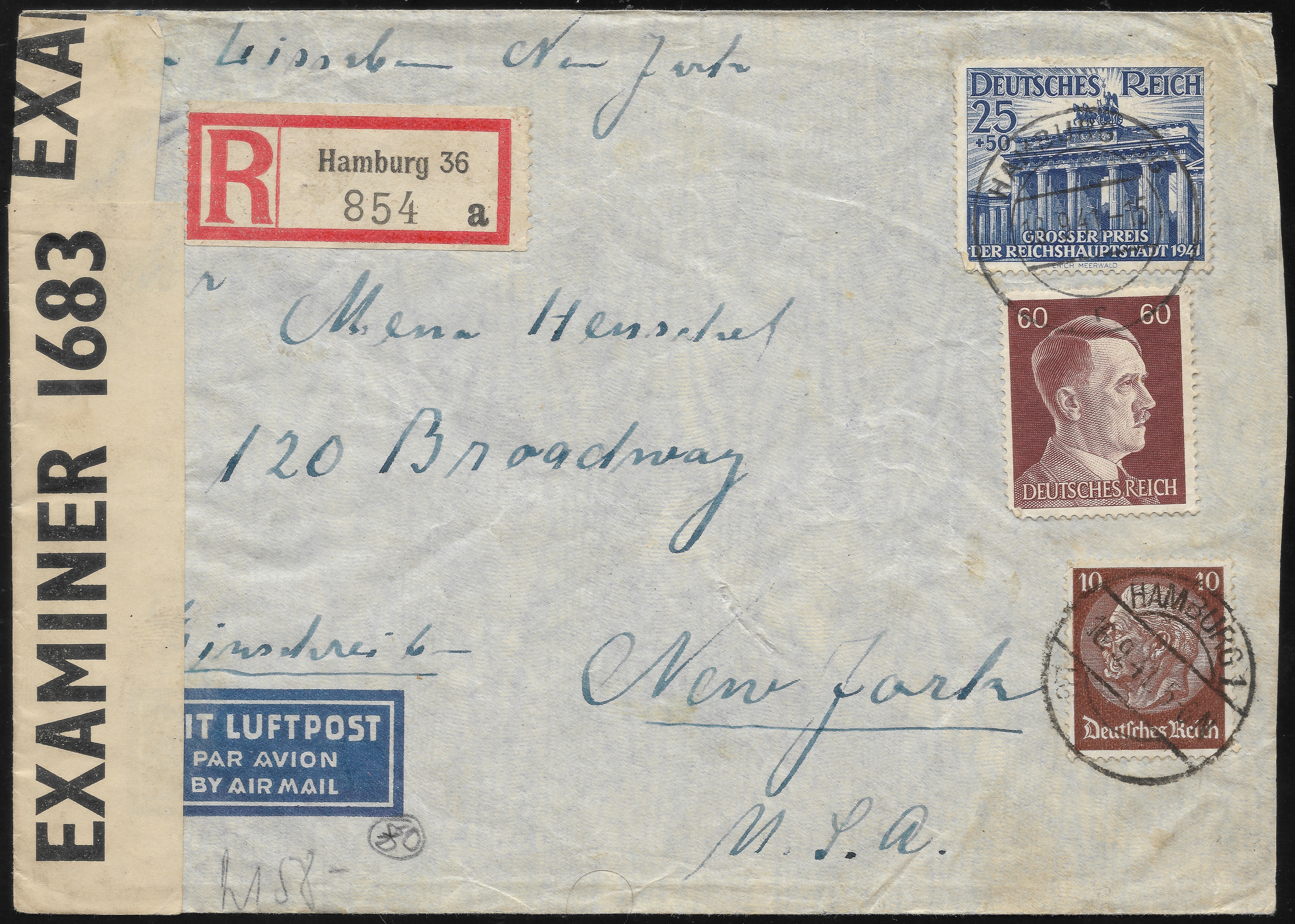 I found today’s cover interesting as it was mailed from Germany to the United States two years after the war in Europe began and arrived in New York less than two months before the U.S. entered the war following the bombing of Pearl Harbor. Bearing Scott #B193 (Brandenburg Gate semi-postal issued 9 September 1941), #522 (60-pfennig definitive issued 1 August 1941), and either Scott #405 or 421 (10-pfennig definitive issued circa 1933-1934), the cover was postmarked in Hamburg on 19 September 1941. The addressee apparently worked at 120 Broadway in New York City which is a 38-story skyscraper in Lower Manhattan’s Financial District known as the Equitable Building. Upon its completion in 1915, this was the largest office building in the world by total area.

Before the letter made it out of Germany, it was censored by the Oberkommando der Wehrmacht, the High Command of the Wehrmacht (armed forces) of Nazi Germany. Created in 1938, the OKW replaced the Reich War Ministry and had nominal oversight over the Heer (army), the Kriegsmarine (navy), and the Luftwaffe (air force).

Rivalry with the armed services branch commands, mainly with the Army High Command (the OKH), prevented the OKW from becoming a unified German General Staff in an effective chain of command. It did help coordinate operations between the three services. During the war, the OKW acquired more and more operational powers. By 1942, OKW had responsibility for all theatres except for the Eastern Front against the Soviet Union. The term “Geöffnet” on the censor tape indicates that the item was opened. 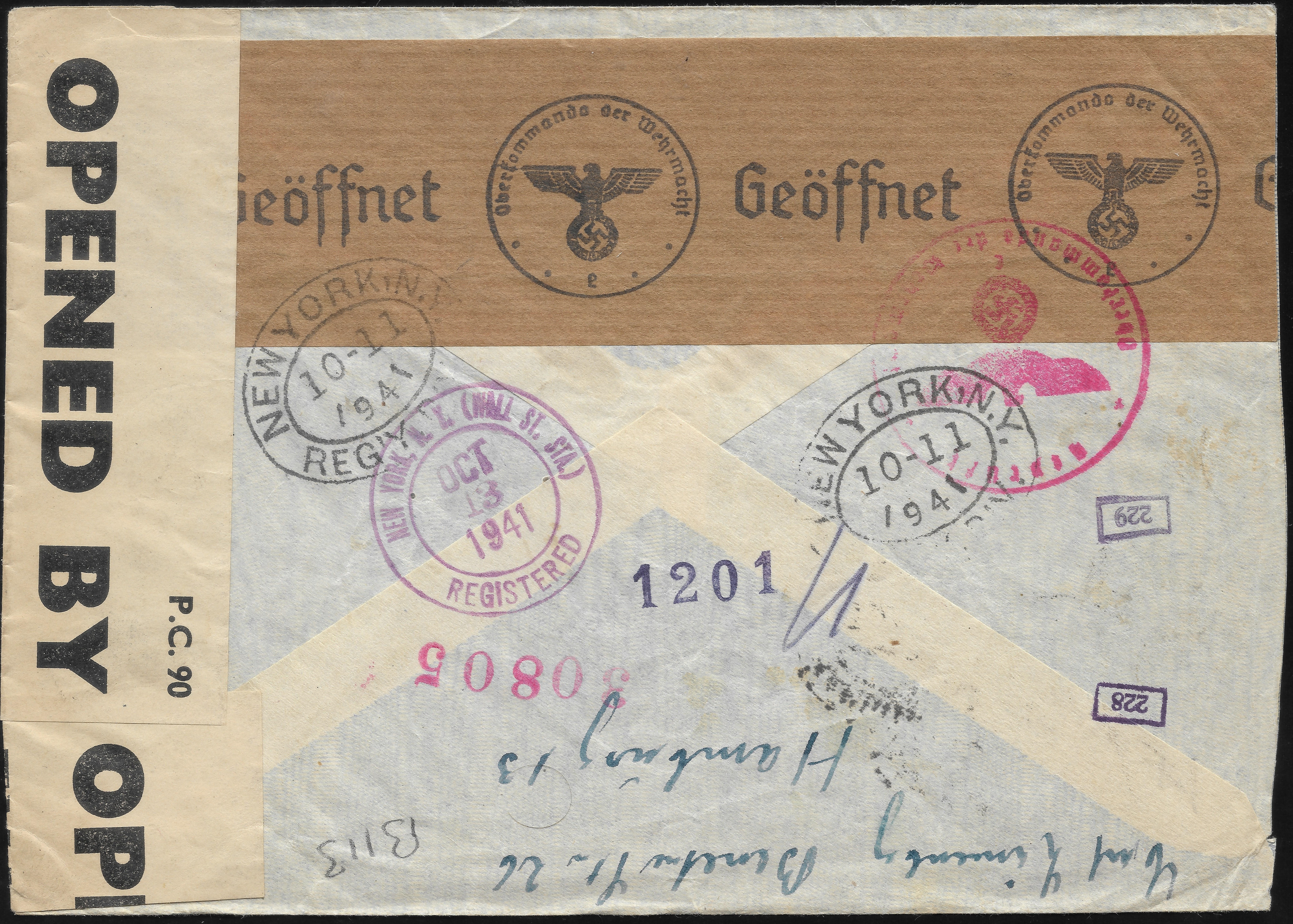 The envelope was censored again by the United States Post Office Department upon arrival at the Registry branch on 11 October (“Opened by Examiner 1683”). A final marking indicates a 13 October receipt at the Wall Street Station post office in New York City.

Before I sign off, I want to mention that I kind of treat the dictator portrayed on the middle stamp the way they do with Lord Voldemort in the Harry Potter books and movies — “He Who Shall Not Be Named”. If I need to refer to him, it is usually by using either the words “the Chancellor” or “the Führer“. I try to be sensitive to the fact that he is still universally hated and I am sickened of the cult-of-personality that, even now, surrounds him. One finds many non-collectors driving up the price of common philatelic material bearing his image just to “own a piece of him”. By presenting what little material that I do have from that era, I am in no way trying to glorify this mad man or his followers. If seeing this offends you, I apologize for today’s post and would like to warn you that there will probably be a few more similar to it in the weeks to come.