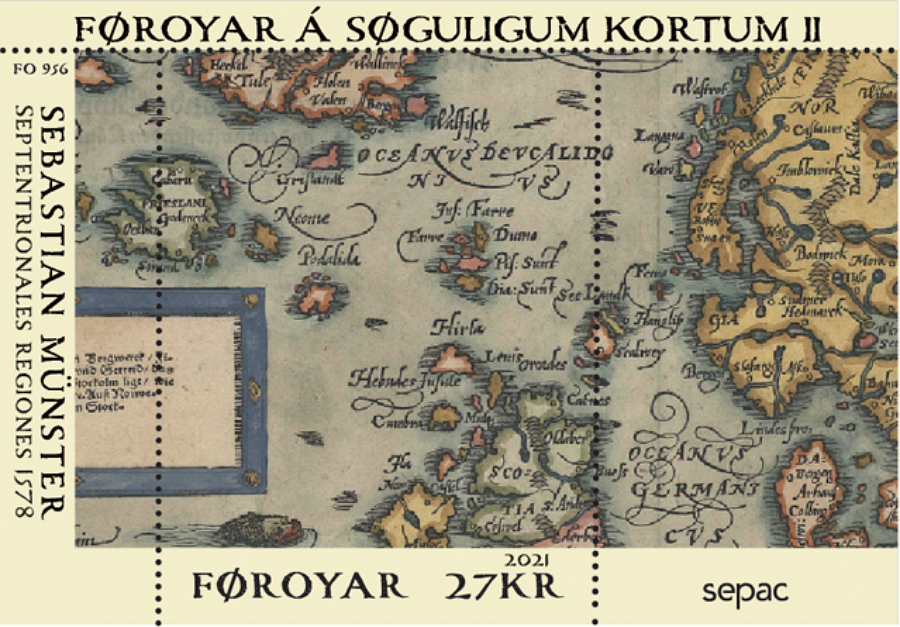 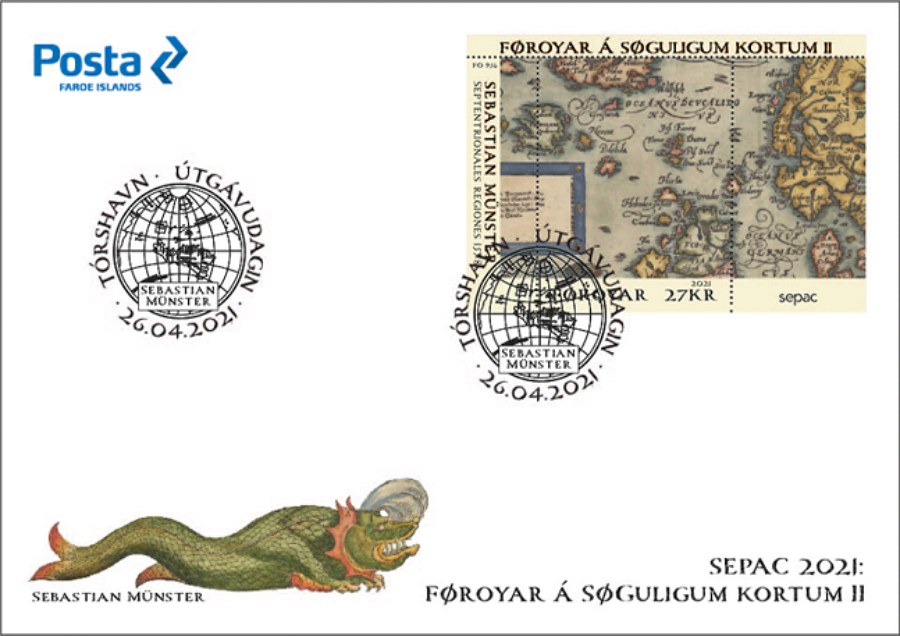 Old Maps of the Faroe Islands

The German scholar Sebastian Münster (1488-1552) was most important geographer of the sixteenth century. His Cosmographia, published in 1544, spread geographical knowledge wide over Europe. It was issued in nearly 40 editions and 6 languages. He published each known continent on a separate map. He died May 1552 in Basel of the Black Death.

On the Posta stamp we see the map called: Gemeine beschreibung aller Mittnächtigen Länder/Schweden/Gothen/Nordwegien/Deñmarck/rc. Publication year 1578. The map was printed without change in German reprints of the book and in Latin editions with a title in that language, Septentrionales regiones.

Münster’s Cosmography was improved by his stepson, Henri Petri. When Petri died in 1579 his son, also named Sebastian, took over. He believed it was about time the maps in the book were renewed before being published again. They first appeared in the 1588 edition the Cosmography. The map had Ortelius’ map of the Northern Countries as a model.

The great discoveries of Columbus, da Gama, Vespucci, Magellan, and others transformed the world maps of those days.

In Cosmographia we find a map of the Northern countries loosely based on Olaus’ Carta marina from 1539.

Münster obtained original manuscript material for description of the countryside and of villages and towns, he worked mostly with printed materials as sources for his book.

Münster also build his work on Jacob Ziegler (c. 1470/71-1549) and his book about the Northern Countries from 1532. Ziegler’s version of the Far North found its way into various Italian maps. Giacomo Gastaldi and Vincenzo Valgris’s map from 1561 was also an inspiration for Münster’s map.

In Münster’s work we find an image of the North imagined, both as a place of darkness, death and the seat of evil, but also as a place of felicity with virtuous happy people.

Sebastian Münster is also famous for his iconic chart of sea monsters and beasts, both mythical creatures and real, it was also published in his Cosmographia. Münster’s plate of mythical creatures includes abundant tusks, horns and twin-spouts. One vignette shows a galleon trying to outrun one monster by throwing their cargo overboard, while one sailor takes sight with a musket, Olaus Magnus has put this monster close to the Faroe Islands in his map, here in Münster’s version.

It can be hard to understand the share number of ocean-dwelling creatures were once depicted as sea monsters. Perhaps it was to create even more mystique among the explorers of the time that Münster added all sorts of creatures to his work.

Later the geographer Adam Ortelius adapted many of the monsters for use on his map of Iceland in 1587.

The Cosmographia by Sebastian Munster was published until 1628, long after his death. It passed through 24 editions in 100 years, becoming an important book of geography, astronomy, history, and natural sciences, it remained authoritative and in demand until the end of the century, reflecting the general eagerness of the times for learning, especially geography.