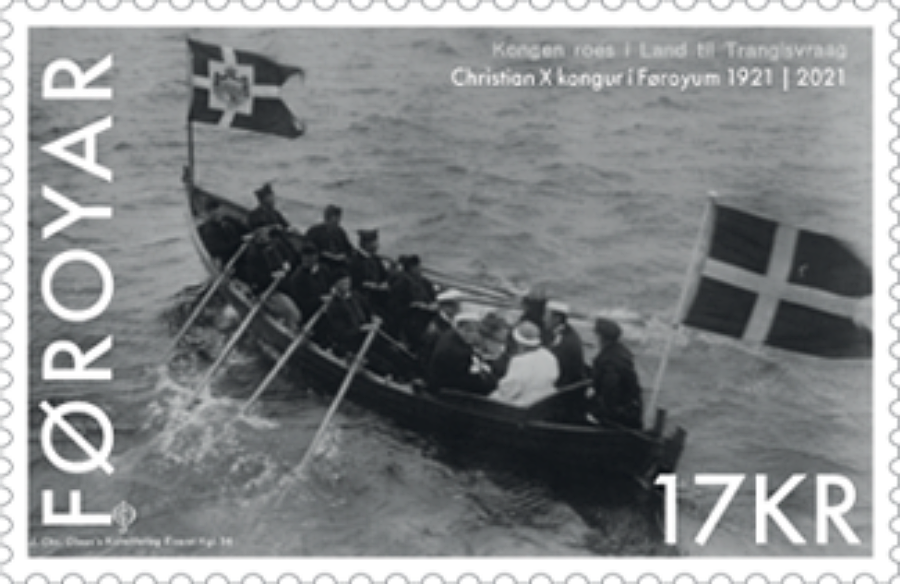 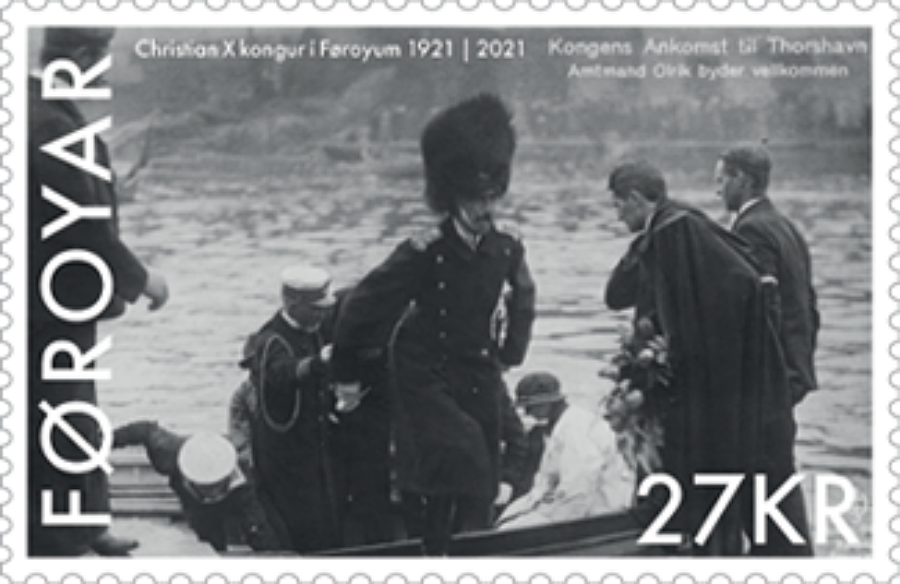 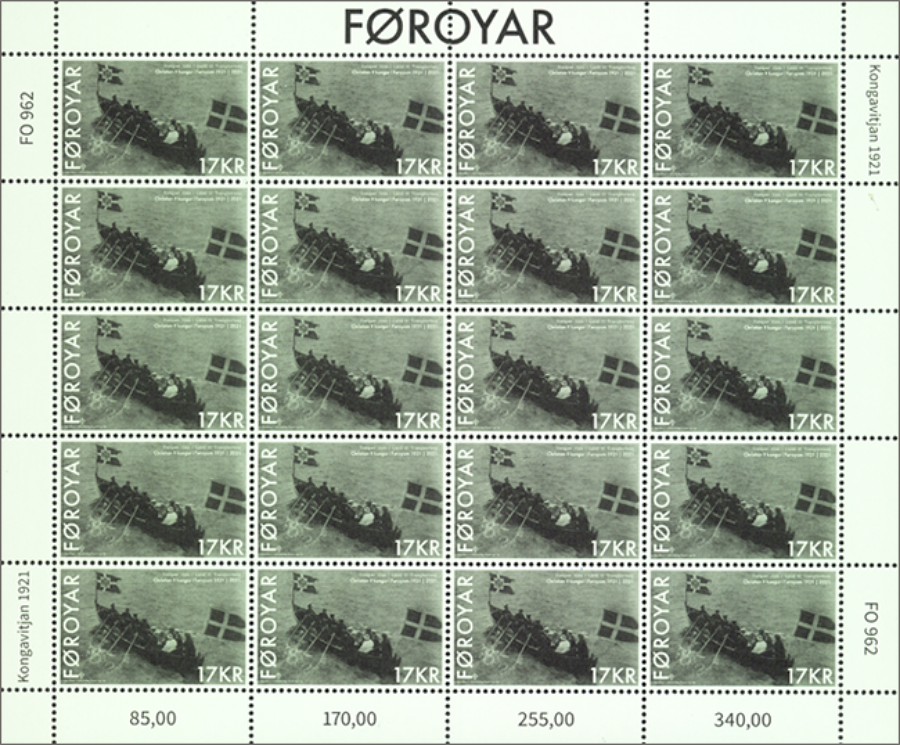 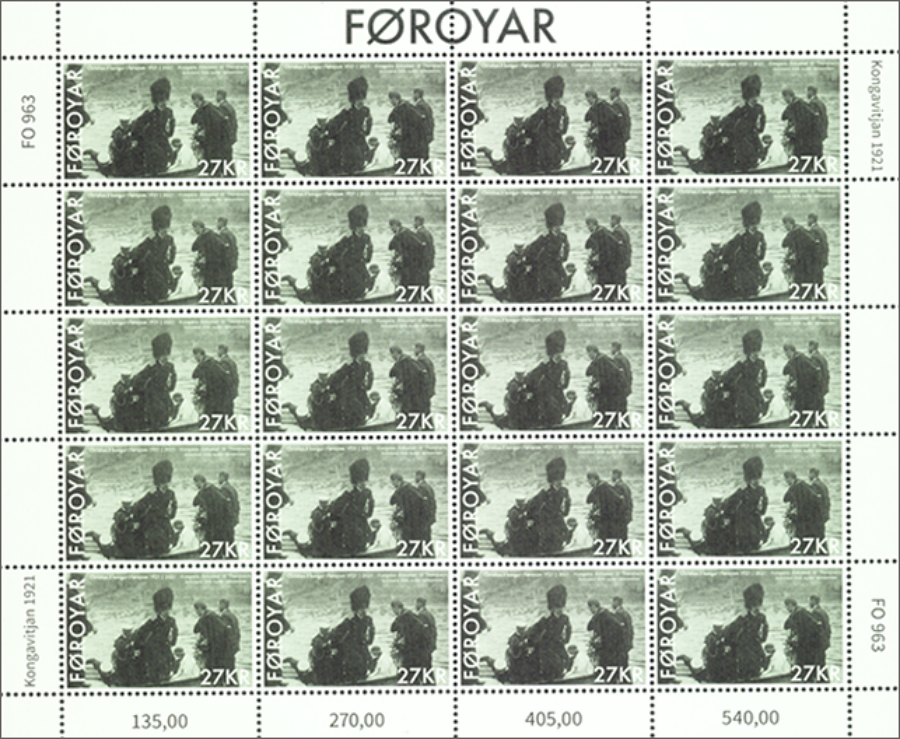 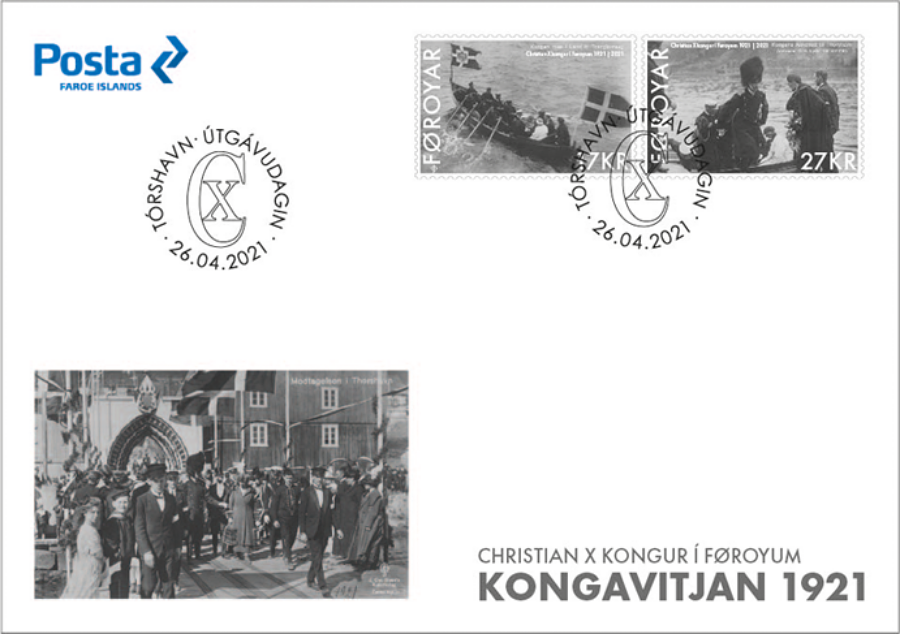 Royal Visit to the Faroe Islands in 1921

King Christian IX was the first reigning Danish monarch to visit the Faroes; his only visit was in 1874 when the Danish Navy’s wooden frigate Jylland became a temporary Royal Yacht to convey the King to Iceland, calling in at the Faroes on route. Like his father King Frederik VIII made only one visit to the islands, this was in 1907.

Unlike his grandfather and father, King Christian X visited the Faroes on more than one occasion. The first of these was in 1921 when, on June 17th, the King accompanied by Queen Alexandrine and their sons Crown Prince Frederik and Prince Knud left Copenhagen on route for the Faroes. Although a purpose built Royal Yacht, the Dannebrog, was available, it was thought that a side-wheel paddle steam yacht was perhaps not necessarily the best conveyance for the conditions that could be encountered in the North Atlantic, even in summer. So the King and Queen were aboard the Valkyrien, a Danish Navy vessel and the Crown Prince on board the cruiser Heimdal; the cruiser Fylla also formed part of the Royal flotilla. Bad weather forced an unscheduled stop at Skagen but it was in more calm and pleasant conditions that they arrived at Vágur on Suðuroy on the morning of June 21st. This was not the planned first landfall and there was no official welcoming party to greet the Royal party.

By 1pm the flotilla had moved on to Tvøroyri where many people were on the shoreline and came out on to the fjord in Faroese boats in order to welcome it. A postcard published by J. Chr. Olsen depicting the King and Queen being rowed ashore is the subject of the first of the stamps being issued. On the quayside local businessman Peter Mortensen welcomed the King and Queen. They then proceeded to the Klubbin (a local members club) where Peter’s brother Niels Juel Mortensen gave a speech and toasts were drunk in champagne. Detail from another postcard in the series issued by J. Chr. Olsen is illustrated in Fig. 1. It depicts the Royal couple descending Miðbrekkan in Tvøroyri, presumably after their visit to the club. (Although the card was incorrectly captioned by the publisher to suggest that the photograph was taken in Tórshavn, examination of the image reveals the hillside in the distance is Ravngjógv – ravens cliff – above Tvøroyri.) The Royal party then visited the church (FO 504) which had been consecrated the year following King Frederik’s visit and this was the topic for another postcard published by Olsen. Visits were also made to the school and hospital. Later that afternoon the King held a reception on board Valkyrien, and in the evening the Royal visitors were back on shore to see a Faroe ringdance.

The next morning the Royal visitors moved on to Tórshavn where they were welcomed on their landfall by the Amtmand, Elias Olrik. A postcard depicting this, and also published by Olsen, is the illustration used for the second stamp in this issue. Anton Degn, the Mayor of Tórshavn gave a speech of welcome on the quayside. Visits were made to the Løgtinghús, the monument commemorating the visit of King Christian IX in 1874 and the church Havnar Kirkja. A dinner was held at the High School that evening with speeches, music and songs written by Hans Andrias Djurrhus (FO 96). Later a dance was held at the Tórshavn Klubbin.

Early next morning, the 23rd, the King and his ships sailed north to Klaksvík where he was welcomed on the quayside by the leader of the local council, O F Joensen. Subsequently visits were paid to the school and the church. The King then watched some swimming contests (in the sea) and rowing races and awarded medals to the winners and runners up.

By about noon the Royal party was back in Tórshavn and after taking some refreshments at the Amtmand’s residence they proceeded to the site where the new hospital was to be built. There the King laid the foundation stone, after which Johan Hendrik Poulsen, a Løgting member from Sandoy, gave a speech in which he requested permission to name the new hospital after the Queen. This request was granted so, on its completion in 1924, it became known as Dronning Alexandrines Hospital. Later that day the Royal flotilla commenced the next leg of its journey in the North Atlantic, leaving for Iceland.

For return visits in both 1926 and 1930 another naval vessel, the Niels Juel, was employed to convey the King to the islands. However a new version of the Royal Yacht, the Dannebrog, had come into commission in May 1932 and, as this was deemed suitable for service in the North Atlantic, it was used for King Christian’s fourth and final visit to the Faroes in 1936. On this visit the King was accompanied again by the Queen together with Prince Knud and his wife Princess Caroline-Mathilde. First landfall was at Vágur on Saturday June 13th and later that day they moved on to Tvøroyri. The next day they were in Tórshavn where the King visited the tuberculosis Sanatorium at Hoydalar (FO 624) whilst the Queen visited a new rest home for women, Naina. Later the King and Queen together toured the hospital which now bore the Queen’s name. In the evening they attended entertainments at Sjónleikarhúsið which continued until the early hours of the following day.

The Dannebrog departed Tórshavn at 14:00 on the Monday bound for Vestmanna where it dropped anchor at 16:30. On the quayside the King was welcomed not only by speeches from politicians and officials but also local school-children who sang “Kong Christian stod” (the Danish Royal anthem) and “Tú alfagra land mítt” (the Faroese National anthem). The King returned to the Dannebrog at 18:30 where he later hosted an on board reception for local dignitaries. At 22:00 that evening the Dannebrog departed its final port of call in the Faroes, bound for Iceland.

Although this was the King Christian’s only visit to the Faroes aboard the Dannebrog, the vessel has been seen many times subsequently in Faroese waters. It was used by King Frederik IX on his five visits and on numerous occasions since by Queen Margrethe II and other members of the Royal family. The vessel featured as part of the design of the miniature sheet (FO 302) issued in 1997 to mark the Queen’s Silver Jubilee.