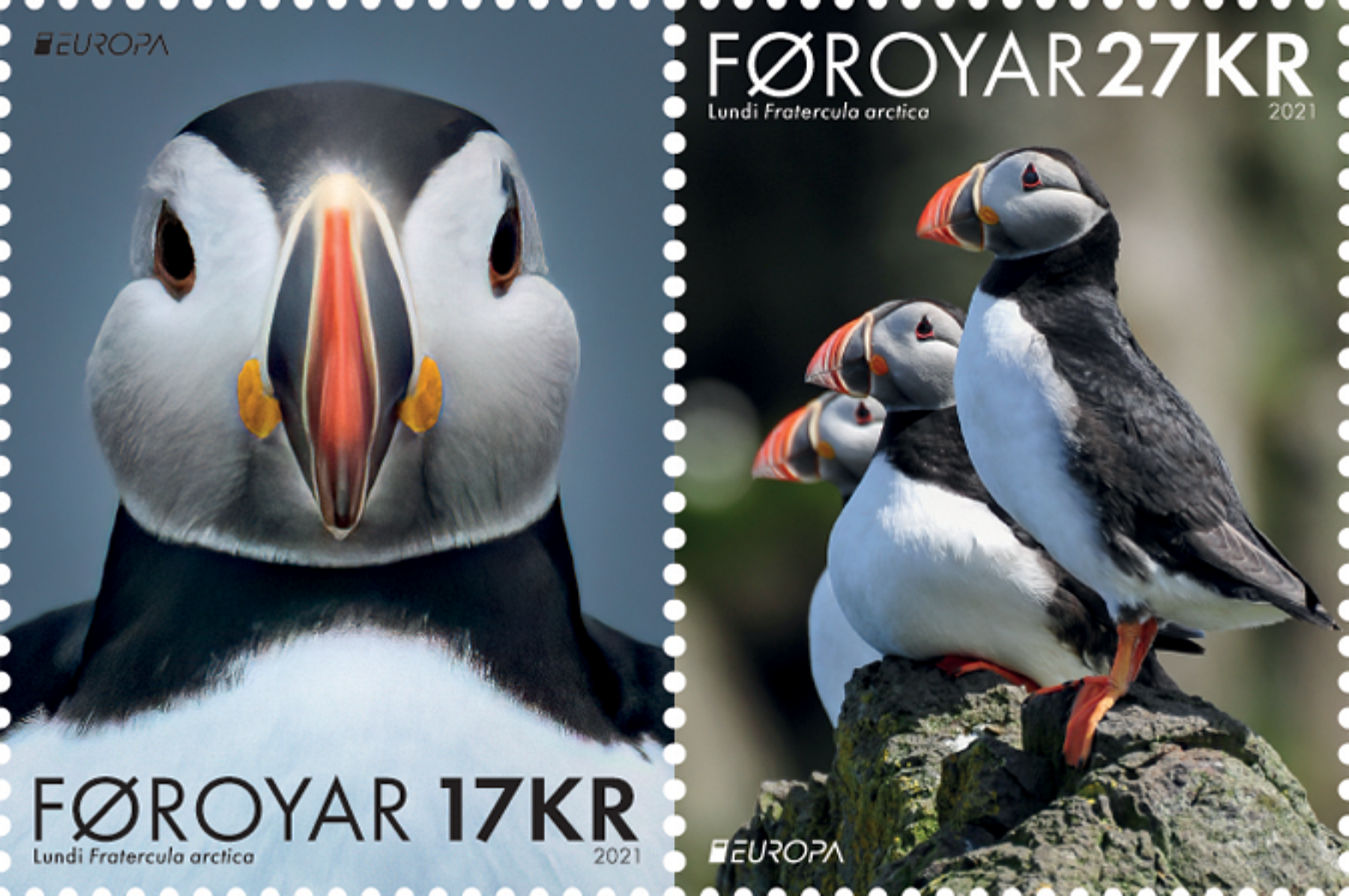 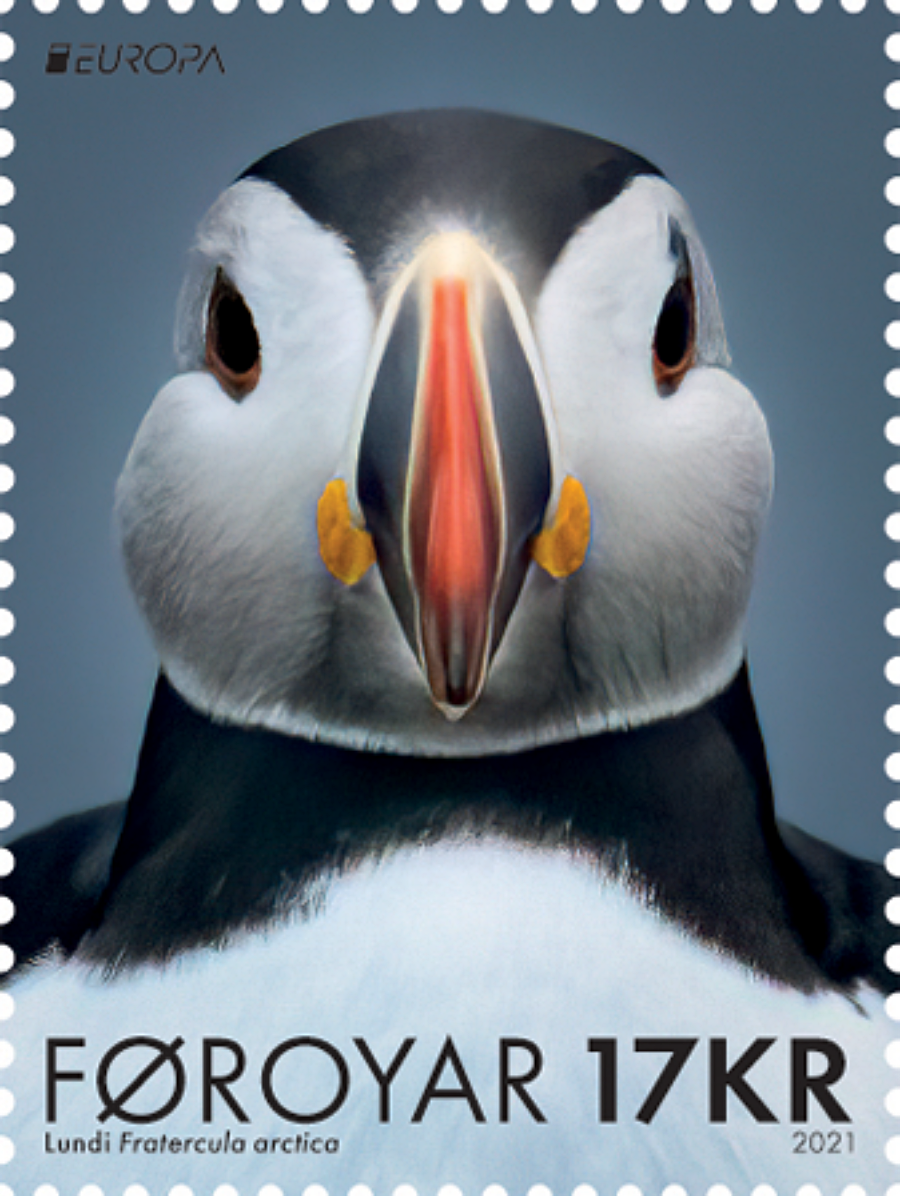 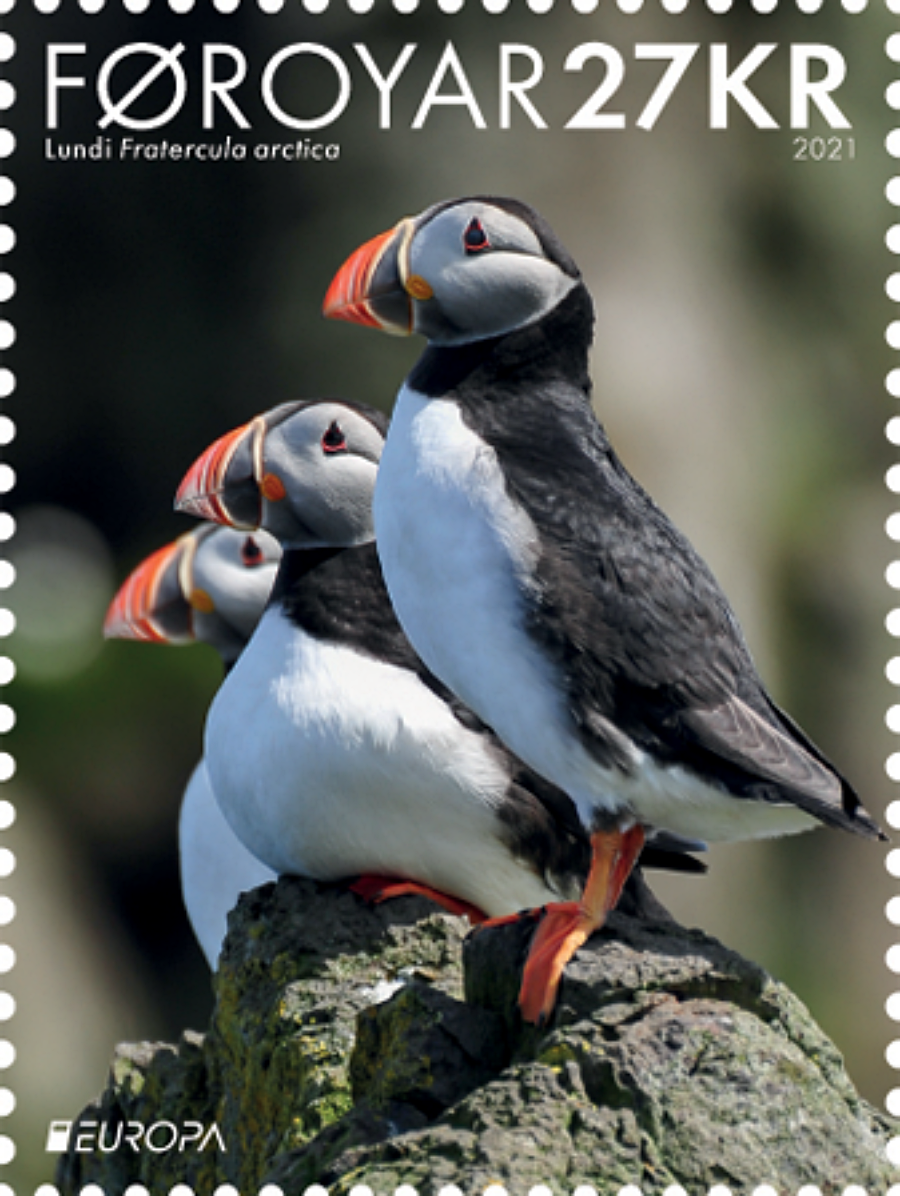 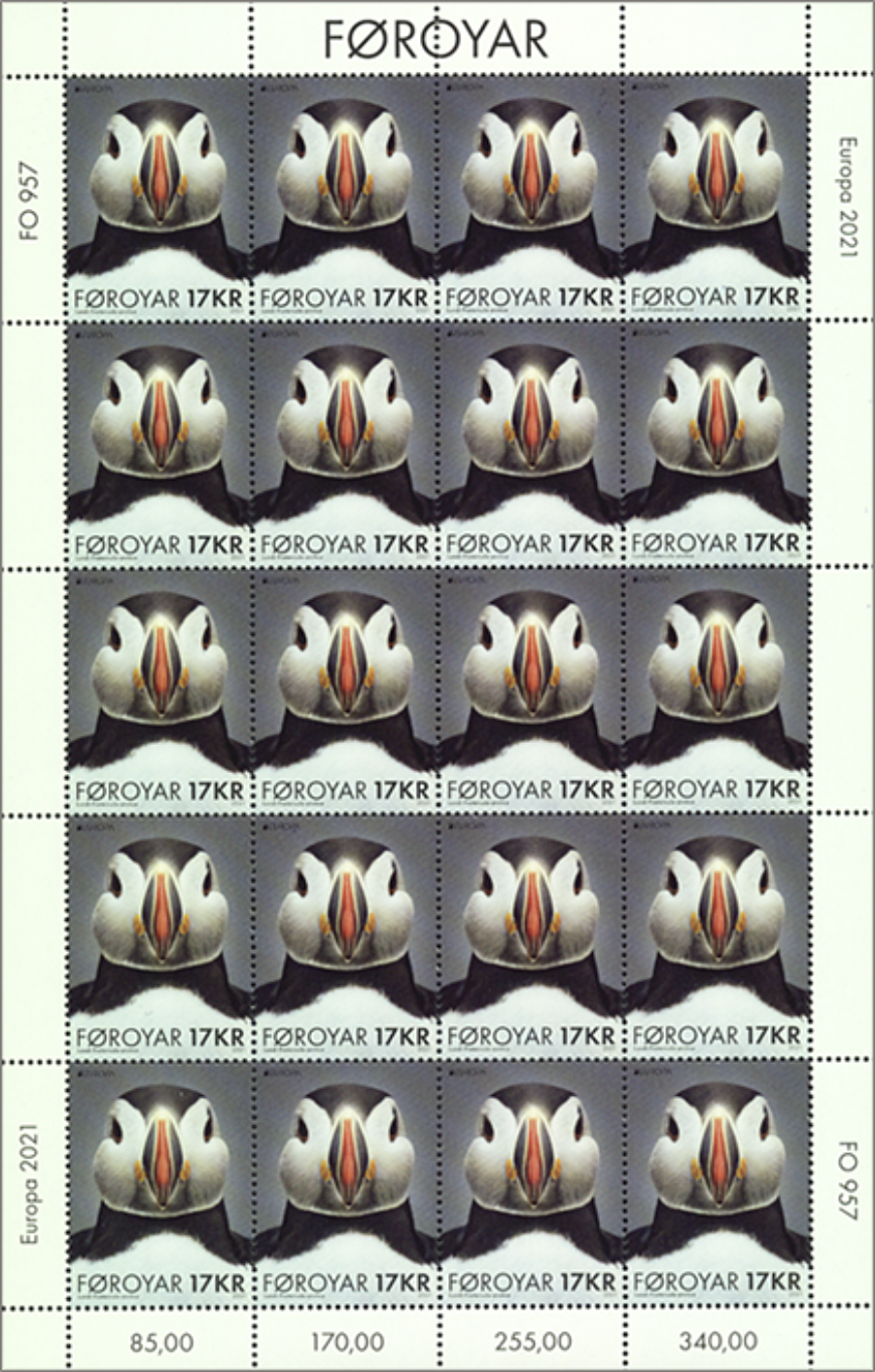 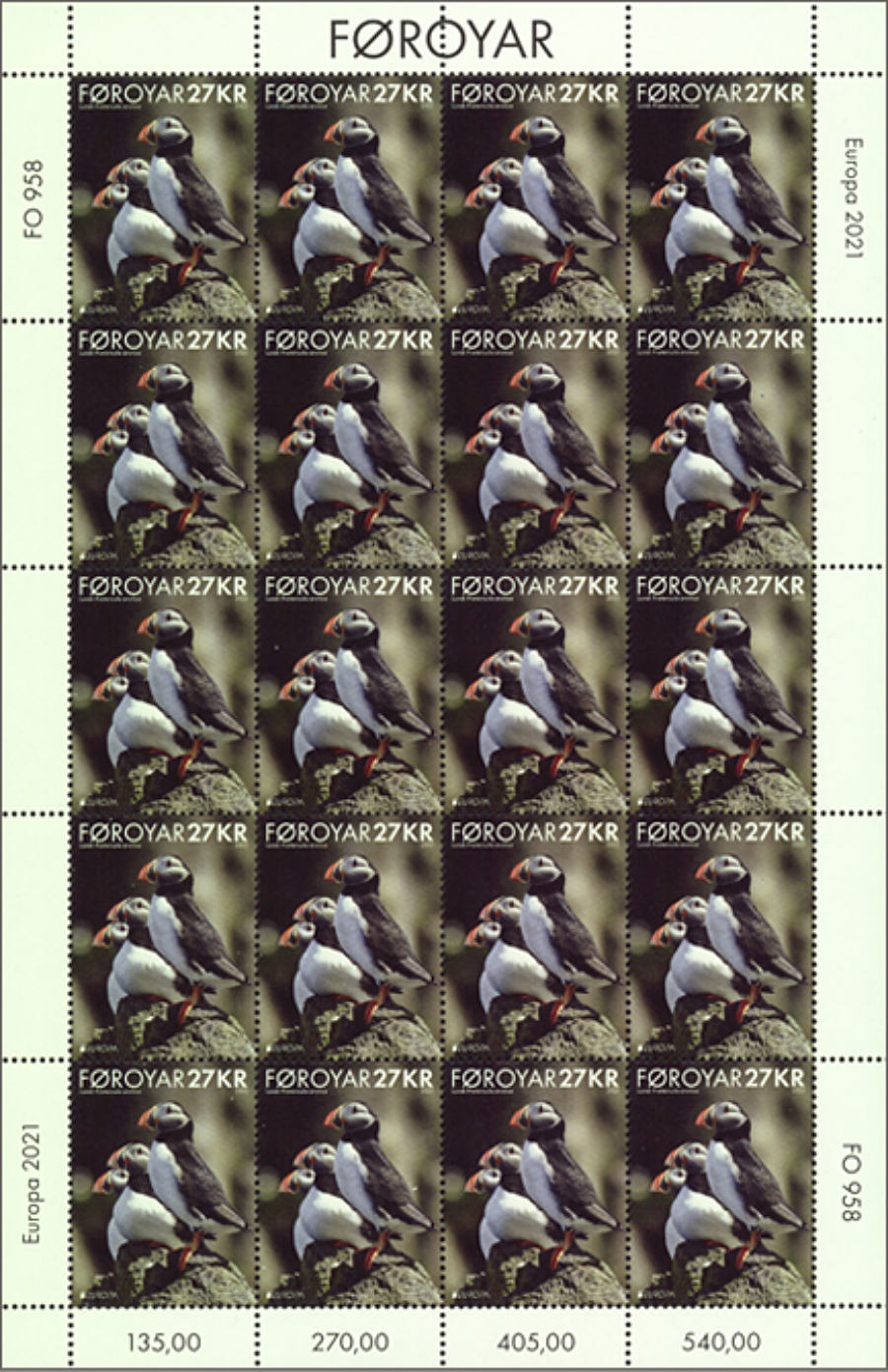 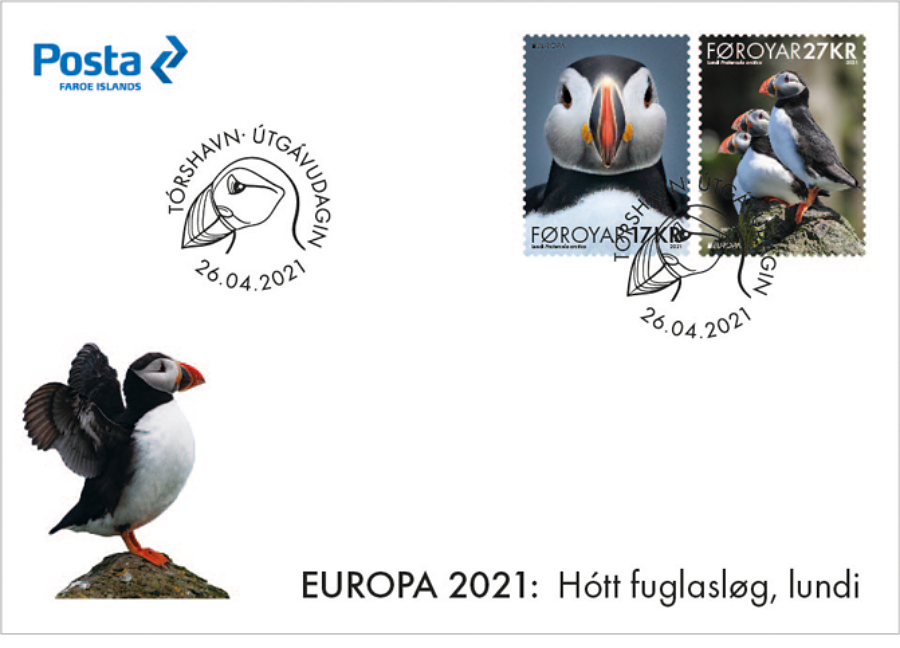 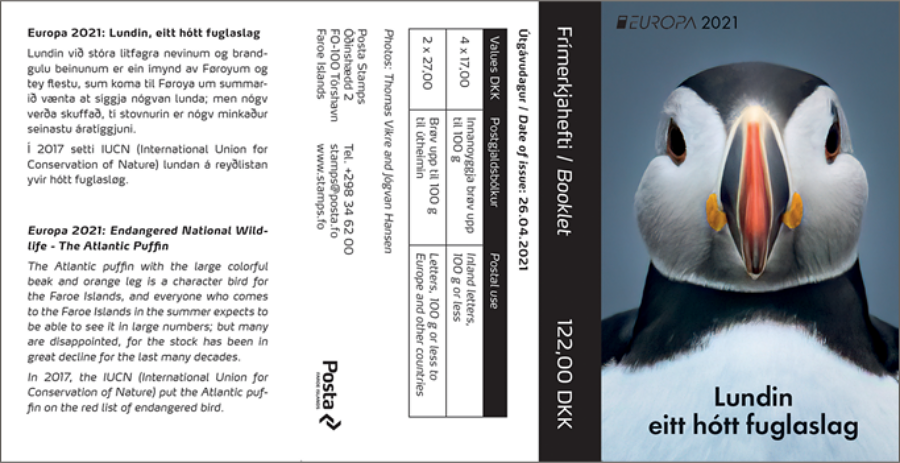 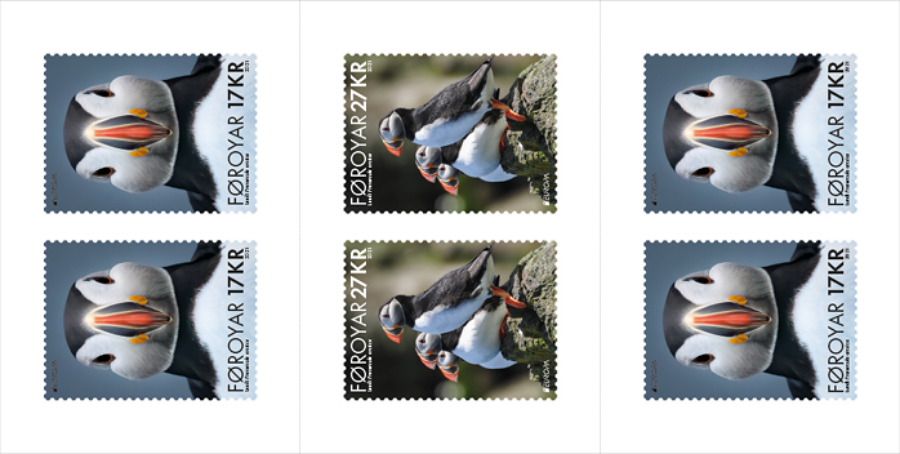 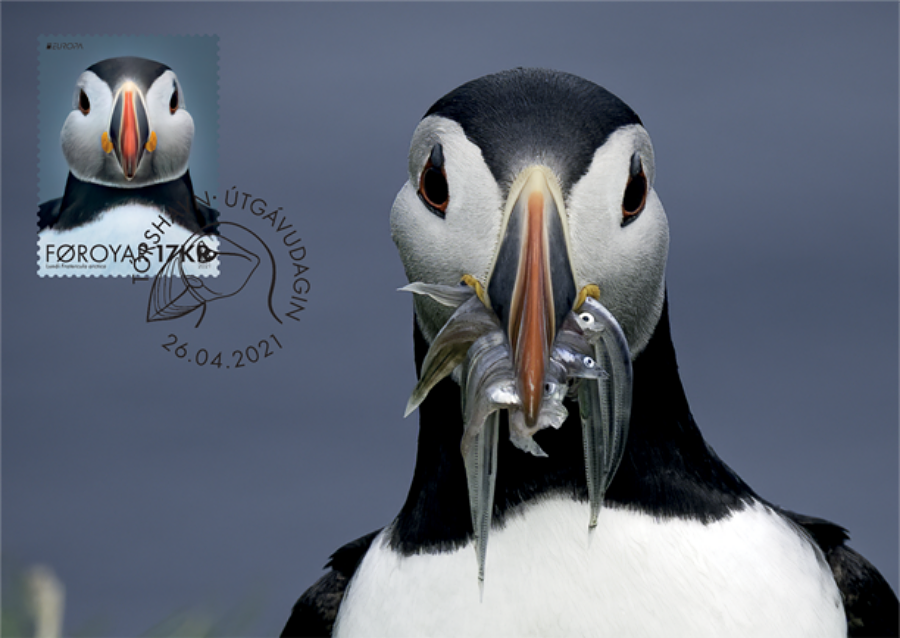 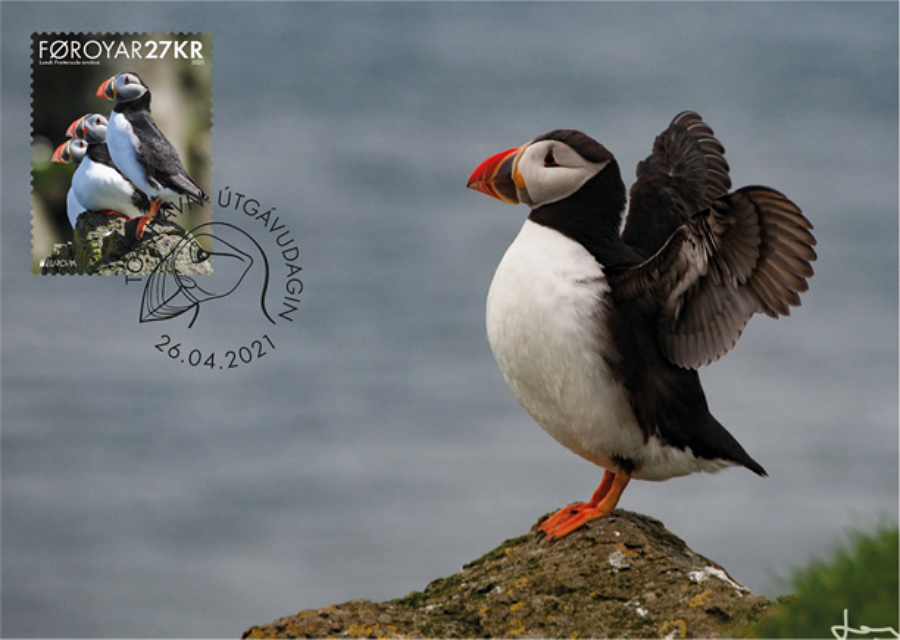 EUROPA stamps are special stamps issued by European Postal Administrations and bear the official EUROPA logo, a PostEurop registered trademark under the aegis of PostEurop. The common theme of this year’s Europa stamps is “Endangered animal and bird species”.

The puffin with its large colourful beak and orange leg is an iconic bird of the Faroe Islands. Everyone travelling to the Faroe Islands in summer expects to be able to see it in large numbers, but many will be disappointed, for the stock has declined substantially in the last many decades.

In 2017, the IUCN (International Union for Conservation of Nature) added the puffin to the Red List of endangered bird species.

The decline in the Faroese puffin population began as early as 1768. At that time a Norwegian ship sailing from Trondheim to Ireland wrecked on the Scottish island of Lewis. The wreck subsequently drifted to Hvalba on Suðuroy. The wreck was crawling with the brown rat (Rattus norvegicus), considered as the most damaging and successful invasive species on the planet.

As early as 1769, another but unknown ship, had brought rats to Thorshavn on Streymoy, spreading quickly to the two large neighbouring islands of Vágar and Eysturoy.

During the construction of a Norwegian whaling station around the year 1900, the rat invaded the three north-eastern islands of Borðoy, Viðoy and Kunoy and today rats are found on 7 of the 18 islands that make up the Faroe Islands.

The brown rat has completely eradicated ground-breeding birds such as the Atlantic puffin (Fratercula arctica grabae), the manx shearwater (Puffinus puffinus) and the storm petrel (Hydrobates pelagicus) on the seven largest islands. The rat is able to kill even the adult birds, which means that for them eggs and chicks are an easily accessible food.

The puffin has been an important food source for the Faroese population. In addition to its value as food, its feathers could be sold and exported in earlier times, making them one of the few items that could provide the islanders with ready money. Most puffins were caught with a pole-net, which is a triangular net on an approx. 3 meters long wooden pole. But until 1942, a number of breeding birds were also taken out of their nesting holes and killed, while others were shot.

No one really knows how large the Faroese breeding population is today. Although pole-nets used in the puffin colonies most often catch young and non-breeding birds, intensive catch has probably decimated the stock over the years. In the late 1930s, about 350,000 puffins were caught annually.

The puffin, which lays only one egg, has experienced another major challenge in the last 25 years, namely a lack of food for the young. The small fat sand lance, or sand eel (Ammodytes dubius) is the puffin’s main food source. Sand eel is not fished off the Faroe Islands, so fishing is not the reason for its absence. No one knows for certain how it all fits together, but higher sea temperatures and lack of plankton are probably the most obvious cause.

When the puffin does not lay eggs, or the young die, old puffins will fly in circles over the colonies and be captured which makes the whole situation even worse. Around the year 2000, 100,000 puffins were caught annually, and a large part of them were old breeding birds, thus contributing to the decline of the Faroese puffin population which is now close to a complete collapse.

The capture of puffins is not the main reason why there is only a fraction left of the original puffin population compared to 300 years ago, but it is unforgivable that now in 2021 the puffin is still not completely protected in the Faroe Islands.

It seems that climate change has a major impact on sand eel, which is the puffin’s main food source. Other Faroese bird species such as the manx shearwater, the arctic tern (Sterna and Paradisaea) and the kittiwake (Rissa tridactyla) which are also completely dependent on the sand eel.

Today, it is estimated that there may be 200,000 pairs of puffins left in the Faroe Islands.

The puffin becomes relatively old which means that there will still be some puffins around for a number of years to come, even if the population continues to decline. The oldest known puffin became 41 years old.