In 1947, King George VI, his wife Queen Elizabeth and his two daughters, Princess Elizabeth and Princess Margaret undertook a leisurely three month journey through their Southern African dominions. They travelled to South Africa on the battle cruiser HMS Vanguard, arriving in Cape Town on 17 February, The royal family then journeyed 10,000 miles including 4920 miles by rail through South Africa, Southern Rhodesia, Swaziland, Basutoland, and the Bechuanaland Protectorate. Thousands flocked to the railway stations along the route for the brief whistle-stop halts; these were the speedy moments for local dignitaries and guards of honor to be presented to royalty or to stand to attention for inspection.

The South African Railways published a substantial (red hardcover) souvenir book in anticipation of these royal travels; complete with maps, color plates (birds, flowers, wild life), and sepia toned photographs. It set out the planned itinerary and gave a romanticized view of history, sites and scenes to be encountered en route. Many such souvenirs were produced in 1947; most popular and still to be found are the medallions given to school children and dignitaries and commemorative mugs. 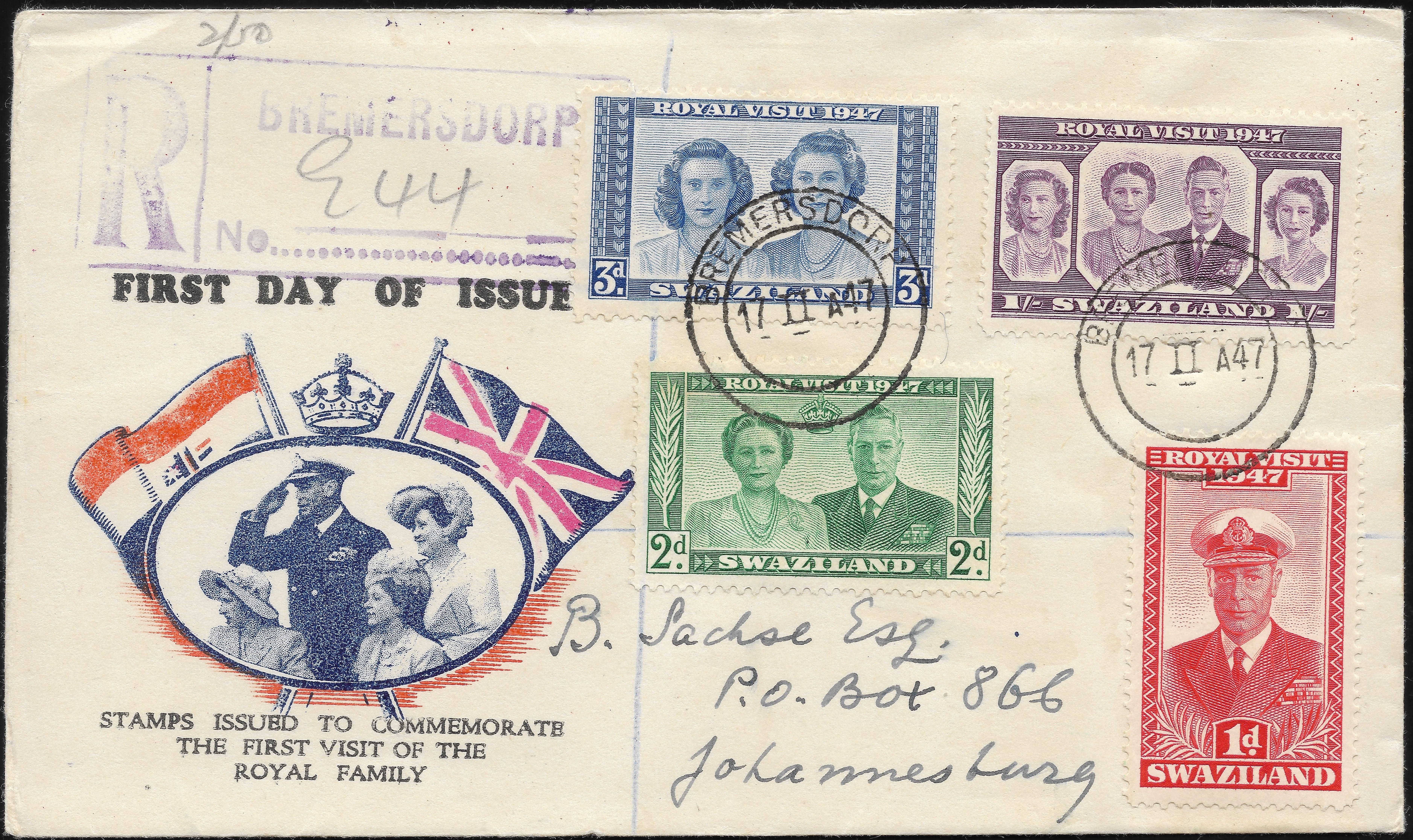 Stamps, of course, were issued to commemorate the Royal Visit. Four-stamp sets with matching designs were issued by Basutoland, the Bechuanaland Protectorate and Swaziland on 17 February, three designs were released by South Africa on the same date with each a pair in the country’s two official languages, English and Afrikaans. The latter were overprinted “S.W.A.” for use in South West Africa. Finally, a pair of stamps were issued on 1 April by Southern Rhodesia.

The Royal Visit to Swaziland was very brief,  going only to Goedgegun (now Nhlangano) on 25 March 1947 to present MBE medals to two ladies who had served in southern Swaziland. The first day cover pictured above features all four stamps released to commemorate the visit, listed as #44-47 in the Michel, Scott and Yves-Tellier catalogues and as #42-45 in Stanley Gibbons. They were recess printed and line perforated to a gauge of 12½. The vertically-oriented 1 penny red features King George VI while the green 2d horizontal stamp portrays Queen Elizabeth and King George VI. The 3d ultramarine pictures Princess Elizabeth and Princess Margaret while the 1 shilling lilac includes the entire Royal Family; both of these are also horizontally-oriented. 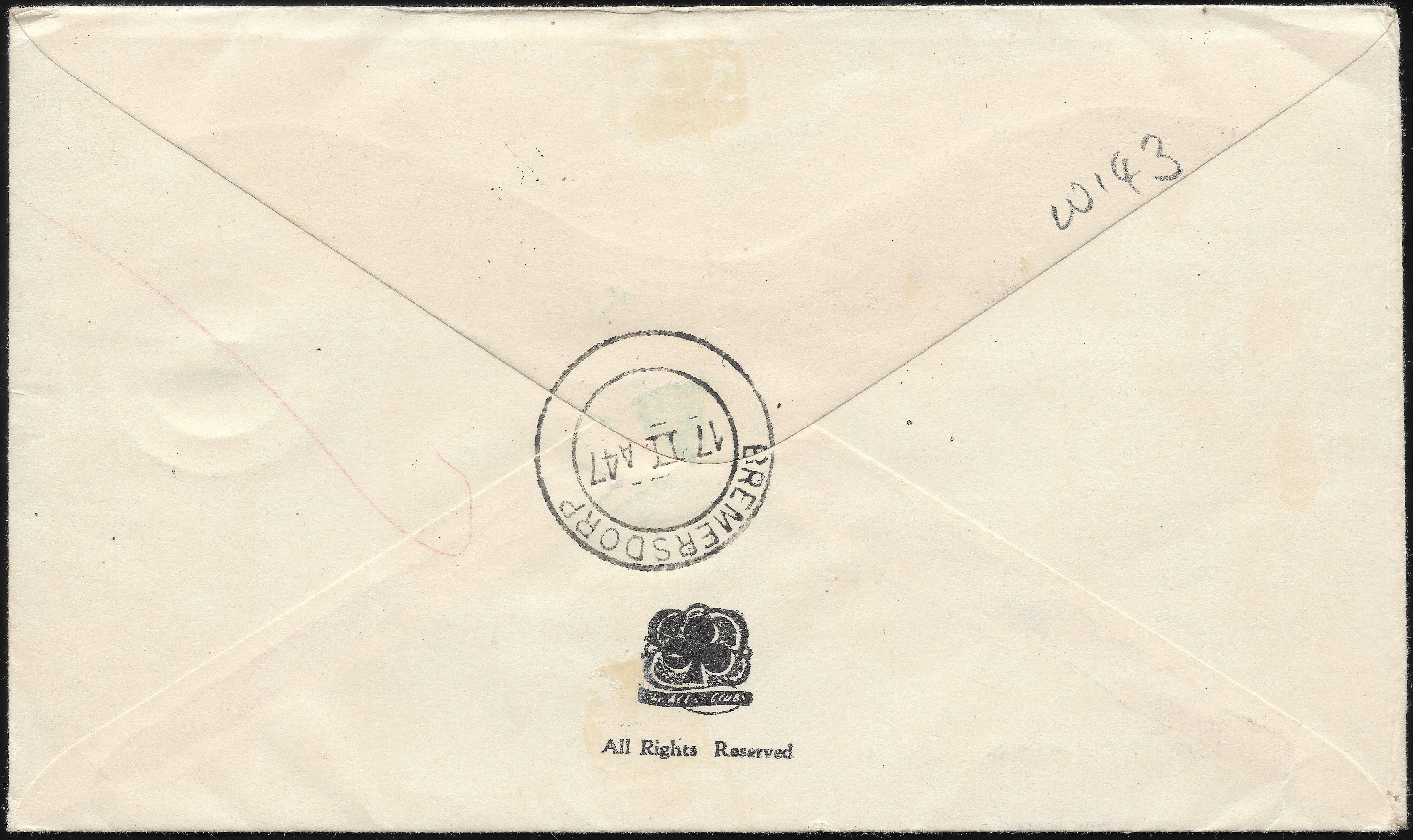 The cover bears ringed cancellations from Bremerdorp, which had been the national administrative center for Swaziland since 1894. The town had been a commercial center from the time a trading post was opened in 1885 and was designated a township in 1898. Arthur Bremer sold his hotel for use as the British colonial capital and stipulated that the settlement would bear his name (dorp is the Afrikaans word for “small town”). The name reverted to its original Swazi name, Manzini, in 1960.

The town was a British/Boer colonial headquarters from 1890, but was destroyed in 1902 amid the Anglo-Boer War when the administrative center was transferred to Mbabane. However, Bremersdorp subsequently remained the commercial, agricultural, and transportation heart of Swaziland, earning the town the nickname “The Hub.” Since its inception in the 1920s, the Agricultural Show (name later changed to the Swaziland International Trade Fair) has been the country’s largest and best-attended annual event.

Today, Manzini is the capital of Eswatini’s Manzini Region. In April 2018, the country’s official name was changed from Kingdom of Swaziland to Kingdom of Eswatini, mirroring the name commonly used in Swazi. The city is the country’s largest urban center ahead of Mbabane, with a population of 110,000 (2008). 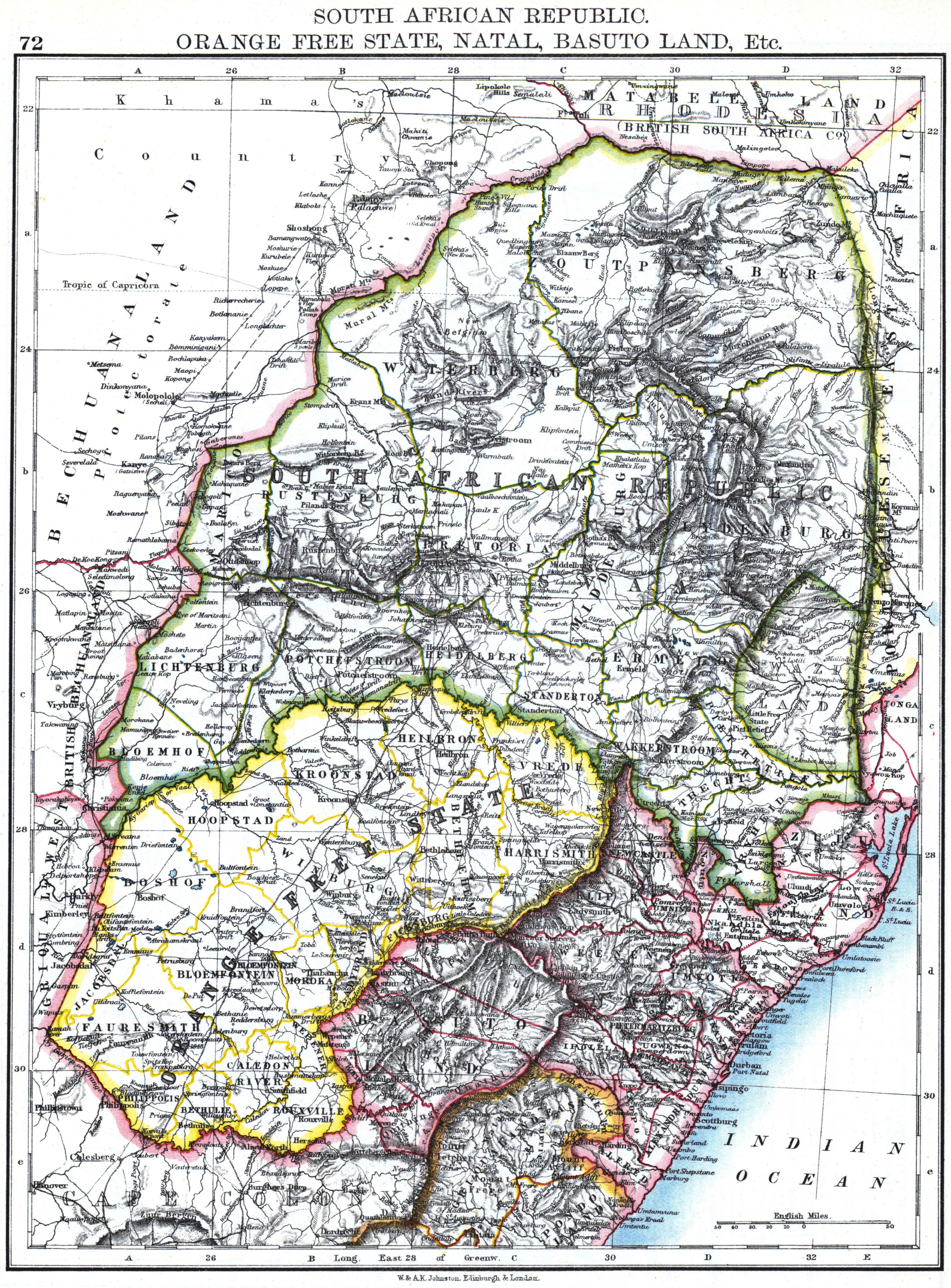