I do not have very many covers from Liechtenstein but I have had a long love affair with her stamps. Today’s cover bears the beautiful set of four stamps issued by the Principality on 8 September 1977 portraying castles (Scott #624-627). Printed by a mix of recess engraving and photogravure, the stamps seem to picture castles owned or previously owned by the Princely House of Liechtenstein; none of them are situated in that small country itself. I also could not match the stamp images on the two higher values with photos of the actual castles (there are several bearing the same name in Austria). According to a 31 July 1977 article in The New York Times, it seems that the year was an especially good one for castles on stamps. 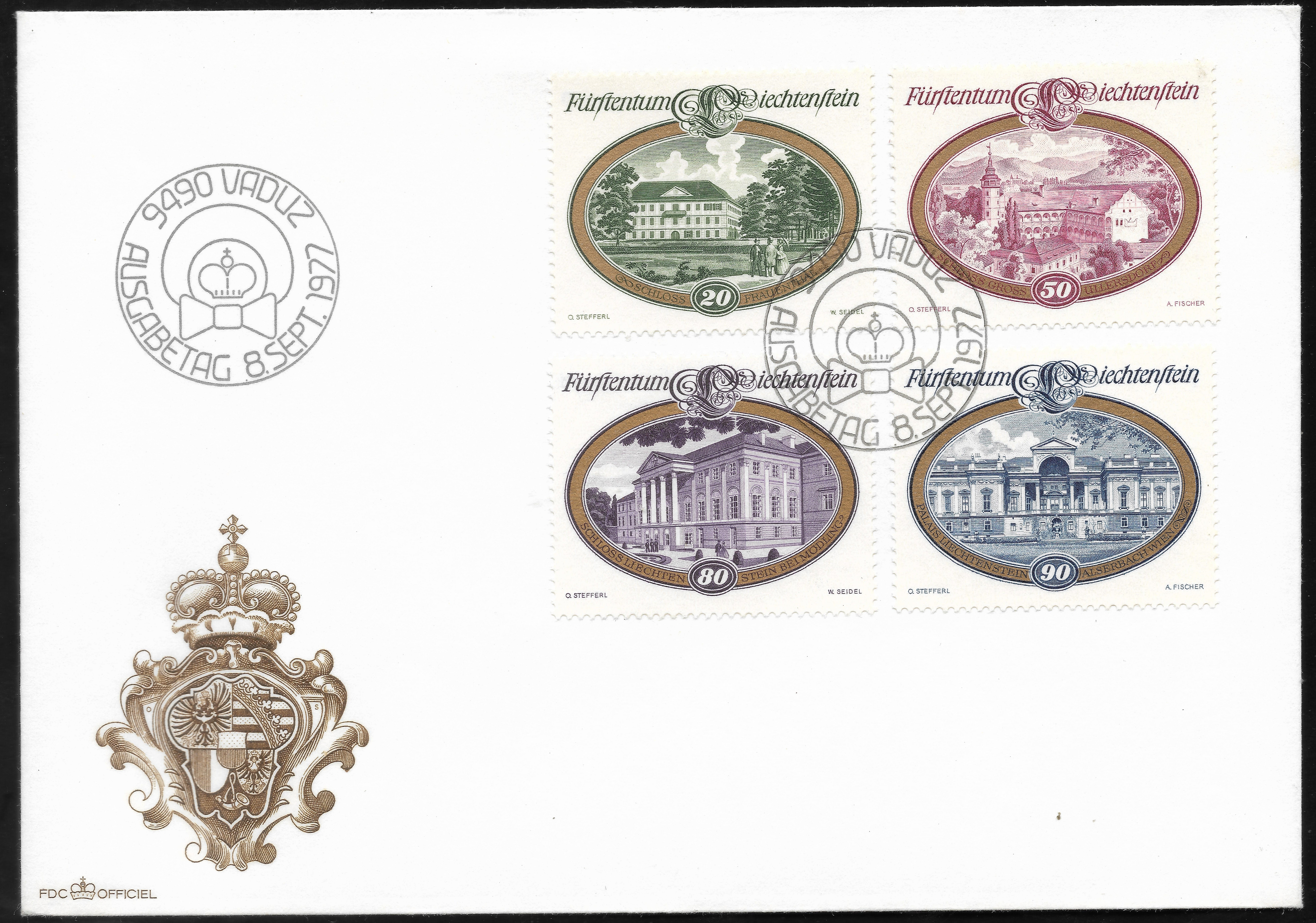 The family originated from Liechtenstein Castle in Lower Austria (near Vienna), which the family possessed from at least 1140 to the 13th century, and from 1807 onwards. Heinrich I von Liechtenstein (died in 1265) was lord of Nikolsburg, Liechtenstein and Petronell.

Through the centuries, the dynasty acquired vast swathes of land, predominantly in Moravia, Lower Austria, Silesia and Styria, though in all cases, these territories were held in fief under other more senior feudal lords, particularly under various lines of the Habsburg family, to whom several Liechtenstein princes served as close advisers. Thus, and without any territory held directly under the Imperial throne, the Liechtenstein dynasty was unable to meet a primary requirement to qualify for a seat in the Imperial Diet (Reichstag).

A seat in the Imperial government would add power, and would be afforded by lands which would be immediate, or held without any feudal personage other than the Holy Roman Emperor himself having rights on the land. The head of the family was able to arrange the purchase from the Hohenems family of the minuscule Lordship of Schellenberg in 1699, and the County of Vaduz in 1712. Schellenberg and Vaduz indeed had no feudal lord other than their comital sovereign and the suzerain Emperor.

According to the Constitution of the Princely House of Liechtenstein of 26 October 1993, all members other than the reigning prince shall bear the titles of Prince or Princess of Liechtenstein and Count or Countess of Rietberg.

The 20-rappen green and gold stamp features Frauenthal Castle in Frauental an der Laßnitz in the district of Deutschlandsberg in Styria, Austria. In 1542 the castle was built as a residence for aristocrats and extended in 1675. Originally it was named after Saint Ulrich. The castle chapel is named after Saint Joseph. From 1812 to 1820 it saw its economic high under the owner Moritz von Fries. In 1820 the ownership was transferred to the House of Liechtenstein. It was renovated in 1969 and 1970. These days it is owned by the House of Liechtenstein and used as a high school.

Built from 1581–1589 on the site of an earlier Gothic fortress by Jan the Younger of Zierotin, the château of Groß Ullersdorf is pictured on the 50-rappen magenta and gold stamp. The château and its estates remained in the possession of the ancient Moravian dynasty of House of Zierotin for more than 300 years.  It consists of three wings overlooking the courtyard with three floors of arcade galleries and is crowned by a narrow octagonal tower. Although Jan was infamous for his ruthlessness towards his subjects, bullying them into working using methods that were exceptionally cruel even for those days, his descendant Přemek II was worse; in 1662 he had the three ringleaders of a peasant rebellion beheaded. At the turn of the 18th century the Renaissance buildings were extended with a further three, also arcaded, Baroque-style wings, to which were added a Baroque-style garden featuring romantic little structures and statues.

At the end of the 18th century the Zierotins fell into debt and began selling their estates. In 1802 they had to sell the family seat in what is now the spa village of  Velké Losiny in the Šumperk District of the Olomouc Region, Czech Republic, to the Princely Family of Liechtenstein, in whose possession it remained until 1945.

According to unfounded reports the Austrian poet Franz Grillparzer stayed in the château in the 19th century; he was supposed to have based his tragedy The Matriarch on the sad romantic story of the ghostly Zierotin protectoress. The château interiors are among the most remarkable Renaissance spaces in the Czech Republic and most beautiful of all is the banqueting hall with paneled ceiling. The picture gallery houses an outstanding collection of Italian, Dutch and Flemish paintings from the 17th and 18th centuries. The Zierotin armory contains a collection of pistols and guns made by master gunsmiths at home and abroad from the 17th to the 19th centuries.

The 80-rappen dark violet and gold denomination purports to portray Castle Liechtenstein near the Mödling area in the Vienna Forest. However, the image on the stamp does not come close to any photos of the actual Castle Liechtenstein near Mödling that I could find.  At any rate, this Liechtenstein Castle is a privately-owned castle near Maria Enzersdorf in Lower Austria, bordering Vienna. It is on the edge of the Wienerwald (Vienna Woods). The castle, originally built during the 12th century, was destroyed by the Ottomans in the siege of Vienna in 1529, and again in the Battle of Vienna in 1683, and it remained in ruins until 1884, when it was rebuilt.

Liechtenstein (German for “Light stone”) Castle is the place of origin of the House of Liechtenstein, the ruling family of the Principality of Liechtenstein. The family owned the castle from at least 1140 until the 13th century, and again from 1808 to the present. Today, the castle hosts the Nestroy Theatre Festival, which is held annually during the summer months. The 1969 film A Walk with Love and Death, the 1971 film The Vampire Happening, the 1979 film The Fifth Musketeer, and the 1993 film The Three Musketeers featured shots of the castle.

Again, I am not certain if this is the Liechtenstein Palace as portrayed on the 90-rappen stamp as this is currently the Liechtenstein Museum in Vienna, Austria. It contains much of the art collection of its owners, the Princely Family of Liechtenstein including important European works of art, forming one of the world’s leading private art collections. Its highlight used to be Leonardo da Vinci’s portrait of Ginevra de’ Benci, which was acquired in 1967 by the National Gallery of Art in Washington, D.C.

The museum, which was originally open to the public from the early 19th century until the Anschluss of 1938, had various locations, including the Liechtenstein Garden Palace (Gartenpalais) at Fürstengasse 1 in Vienna’s 9th District (Alsergrund), and the Liechtenstein City Palace (Stadtpalais) at Bankgasse 9 in Vienna’s 1st District (Innere Stadt). The museum was reopened on 29 March 2004 in the Garden Palace, but after battling with low visitor numbers, it was closed for regular visiting by the public in November 2011. According to the official website of the Garden Palace, “the highlights of the princely collections can be viewed exclusively as part of an event package or a pre-booked guided tour”.

If anyone can confirm the actual castles depicted on all of these stamps, please let me know in the comments.