Today’s cover is from Mali back when the French colonial influence still dictated stamp design. I picked it for a couple of reasons other than the fact that have quite a few stamps with a similar creature pictured. First, I am starting to increase my interest in African states and, second, the stamp was issued just a few months before I was born.  I seem to have been buying a lot of “1965” items lately. 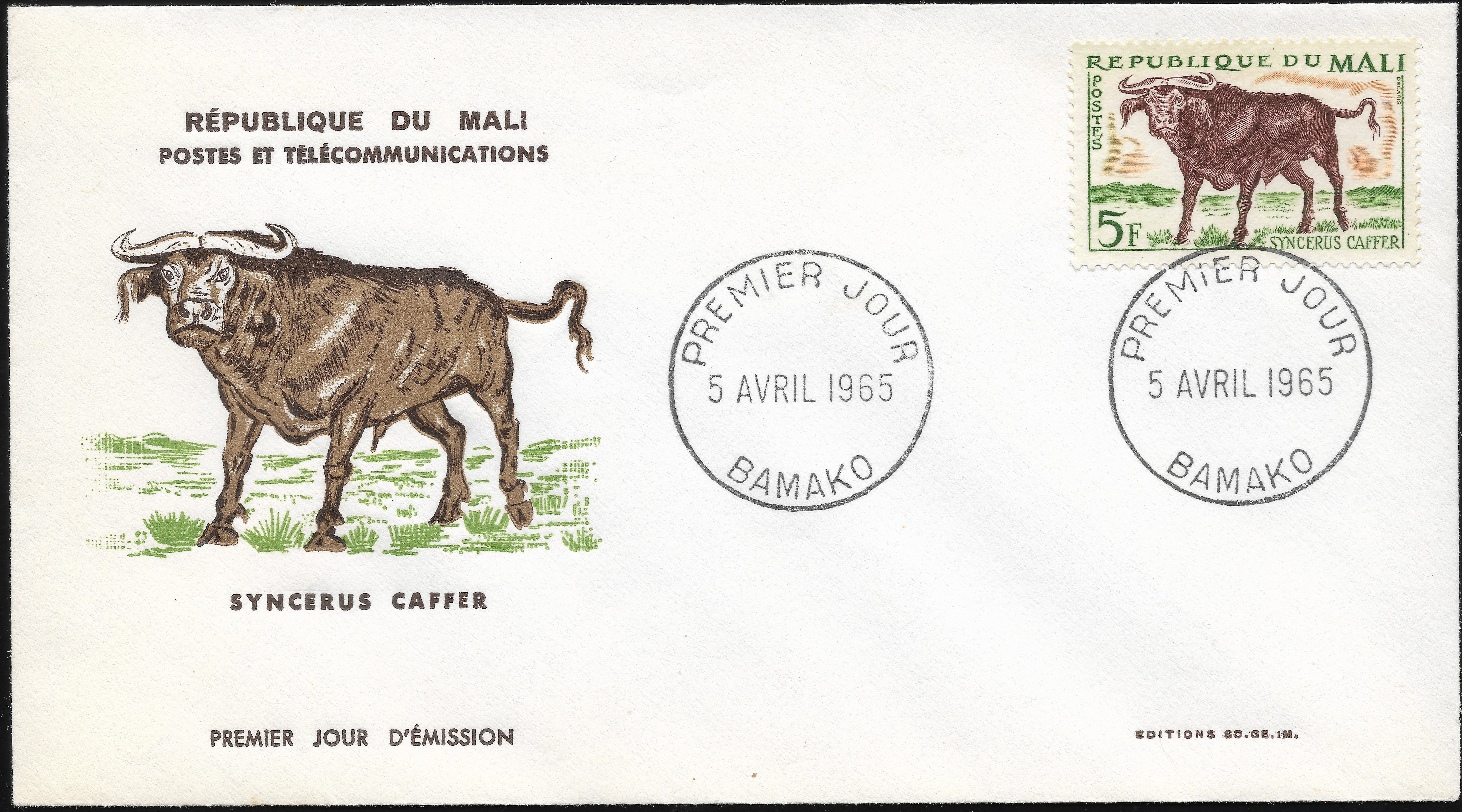 The stamp is part of a set of five beautifully-engraved animal stamps issued by the Republic of Mali on 9 April 1965 (Scott #67-71). The republic had been established in June 1960 following the breakup of the short-lived Federation of Mali which had been founded on 17 January 1959 and consisted of the Republic of Senegal and French Sudan. The five-franc value depicts Syncerus caffer in green, ocher and chocolate according to the description in the Scott catalogue.

The African buffalo or Cape buffalo (Syncerus caffer) is a large sub-Saharan African bovine. Syncerus caffer caffer, the Cape buffalo, is the typical subspecies, and the largest one, found in Southern and East Africa. S. c. nanus (the forest buffalo) is the smallest subspecies, common in forest areas of Central and West Africa, while S. c. brachyceros is in West Africa and S. c. aequinoctialis is in the savannas of East Africa. The adult African buffalo’s horns are its characteristic feature: they have fused bases, forming a continuous bone shield across the top of the head referred to as a “boss”. It is widely regarded as one of the most dangerous animals on the African continent, and according to some estimates it gores, tramples, and kills over 200 people every year.

The African buffalo is not an ancestor of domestic cattle and is only distantly related to other larger bovines. Its unpredictable temperament means that the African buffalo has never been domesticated, unlike its Asian counterpart, the water buffalo. African buffaloes have few predators aside from lions and large crocodiles. As a member of the big five game, the Cape buffalo is a sought-after trophy in hunting.

I am quite familiar with the water buffalo (Bubalus bubalis), also called domestic water buffalo or Asian water buffalo and I used to see them quite regularly here in Phuket, often wallowing in shallow pools of water in fields or alongside roadways in the drainage ditches. With the rampant construction in the southern part of the island in recent years, it has been quite some time since I’ve seen a water buffalo.

This is a large bovid originating in the Indian subcontinent, Southeast Asia, and China. Today, it is also found in Europe, Australia, North America, South America and some African countries. Two extant types of water buffalo are recognized, based on morphological and behavioral criteria – the river buffalo of the Indian subcontinent and further west to the Balkans, Egypt, and Italy, and the swamp buffalo, found from Assam in the west through Southeast Asia to the Yangtze valley of China in the east.

Water buffaloes were traded from the Indus Valley Civilization to Mesopotamia, in modern Iraq, 2500 BC by the Meluhhas. The seal of a scribe employed by an Akkadian king shows the sacrifice of water buffaloes.

At least 130 million water buffaloes exist, and more people depend on them than on any other domestic animal. They are especially suitable for tilling rice fields, and their milk is richer in fat and protein than that of dairy cattle. A large feral population became established in northern Australia in the late 19th century, and there are smaller feral herds in Papua New Guinea, Tunisia, and northeastern Argentina. Feral herds are also present in New Britain, New Ireland, Irian Jaya, Colombia, Guyana, Suriname, Brazil, and Uruguay.

Most Thai people consider the water buffalo to be slow, awkward and dumb. The Krabue buffalo (Thai: กระบือ) also known as the Siamese buffalo, Thai water buffalo or Thai swamp buffalo is a large breed of water buffalo indigenous to Thailand.

In Thailand, the number of water buffaloes dropped from more than 3 million head in 1996 to less than 1.24 million head in 2011. Slightly over 75% of them are kept in the country’s northeastern region. By the beginning of 2012, less than one million were in the country, partly as a result of illegal shipments to neighboring countries where sales prices are higher than in Thailand.

The animal is considered synonymous with slow, awkward or dumb in Thailand and many will apply the informal Thai word for the creature — khwaai (ควาย) — as a derogatory insult meaning “fool” or “stupid”. In contrast, the water buffalo (called carabao) is considered a national symbol of the Philippines, although this has no basis in Philippine law. Back in Thailand, the most popular rock band is called Carabao.