At first glance, the cover pictured today may not seem like much — a registered letter mailed from Paris in 1934, bearing a pair of France Scott #283 (Yvert et Tellier #289) — the 1.75 franc magenta featuring an allegory of peace issued in October 1932 — which have a current retail value of around 50 U.S. cents each. It is the addressee that makes the front of the cover interesting:  “Monsieur ROOSEVELT, Président de la République des Etats-Unis d’Amerique, Maison Blanche, WASHINGTON” or, in English: “Mr. ROOSEVELT, President of the Republic of the United States of America, White House, WASHINGTON.” 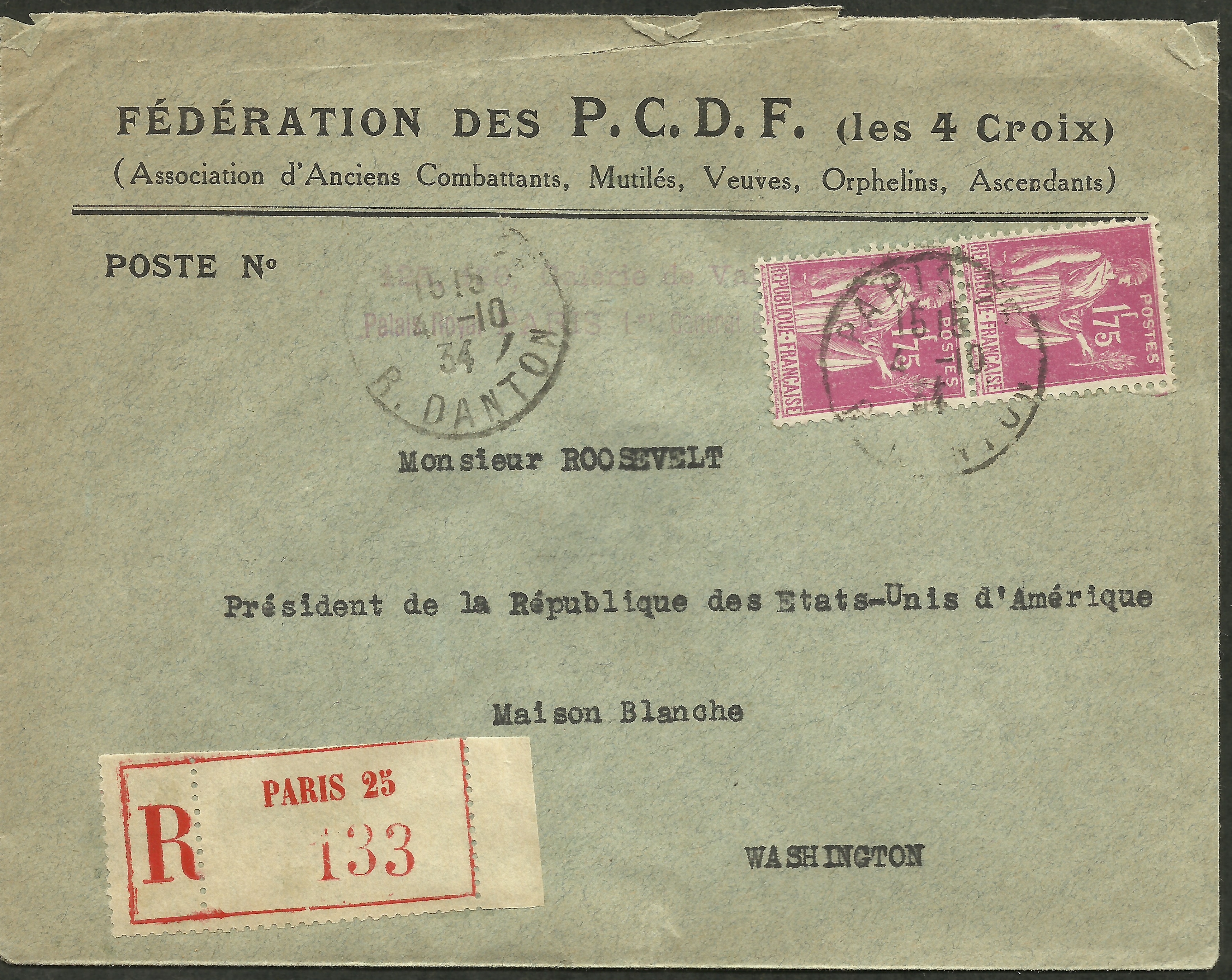 The cover was posted from somebody in the Association of Veterans, Disabled, Widows, Orphans, Ascendants at the Federation of P.C.D.F. (the 4 Crosses), none of which I could find any further references for. It was postmarked on 4 October, 1934 at the Rue Danton post office. This is in a very old area of Paris with immediate streets around it dating back to the 12th century. It was only opened between 1888 between Suger and Serpente streets and, in 1895, between Serpente Street and Saint-Germain Boulevard. One of the more interesting buildings on Rue Danton was the first to be built in Paris using the new invention of reinforced concrete in 1893.

There is also a faint marking in red mentioning a “Palais Royal de Paris” which could mean either the Grand Hôtel Palais Royal Paris or the former royal palace — Palais-Royal — located in the 1st arrondissement built for Cardinal Richelieu from about 1633 to 1639 by the architect Jacques Lemercier. Richelieu bequeathed it to Louis XIII, and Louis XIV gave it to his younger brother, Philippe I, Duke of Orléans. It now serves as the seat of the Ministry of Culture, the Conseil d’État and the Constitutional Council. Unfortunately, I cannot read enough of the marking (and it is repeated on the back of the cover) to determine its significance. 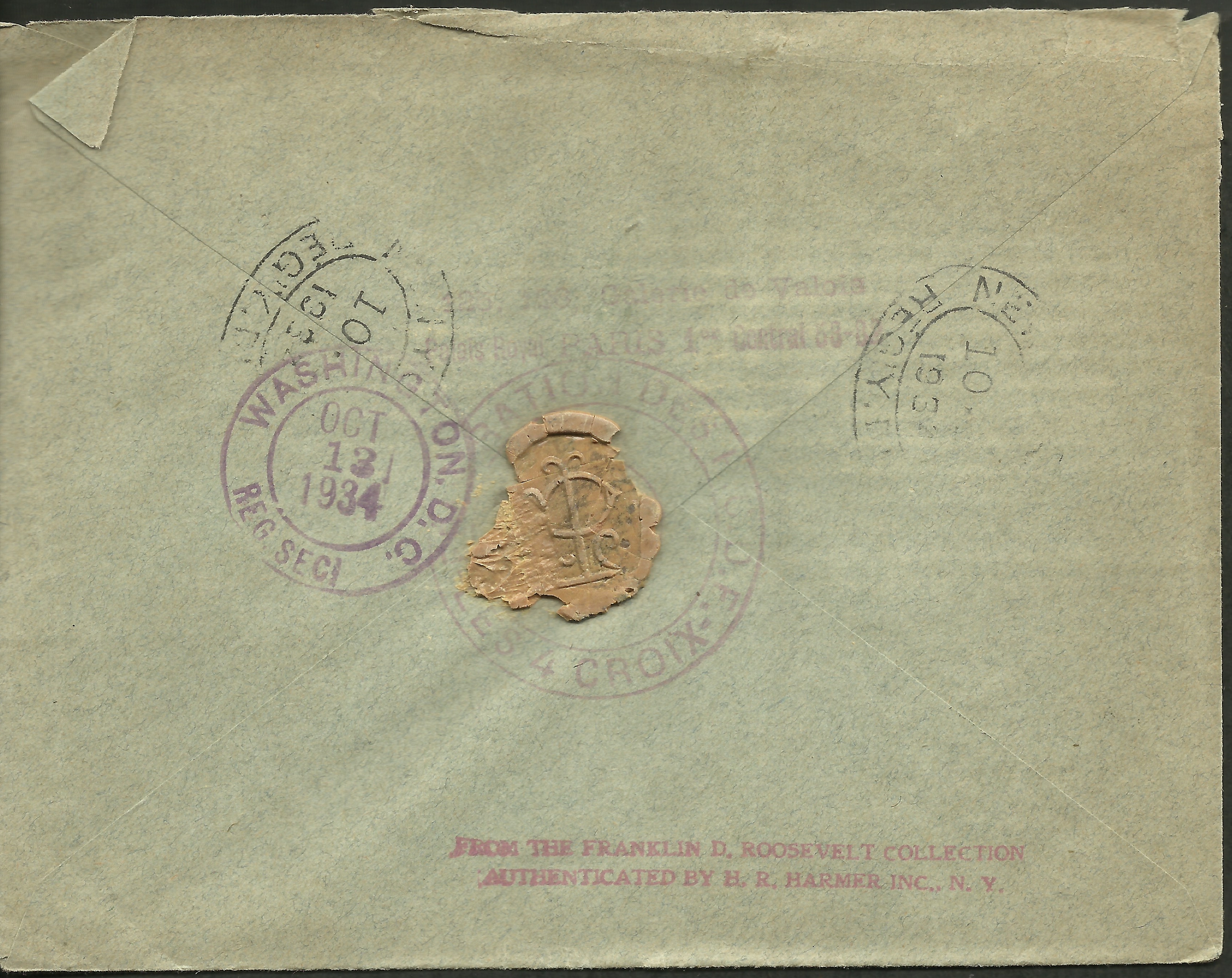 On the back of the cover, we find some interesting marking as well as the remains of a wax seal, surrounded by a handstamp once again mentioning “The 4 Crosses”, Registered Mail markings denoting an arrival in New York City on 10 October and arrival in Washington, D.C. on 13 October. Most interesting of all, however, is the pale magenta handstamp:

It is well-known amongst philatelists that President Franklin Delano Roosevelt was an avid stamp collector (and dabbled in design as well throughout his presidency). There have been many stamps issued noting his love of the hobby. According to the FDR Presidential Library & Museum website, “At his death, his personal stamp collection numbered over 1,200,000 stamps, 80% of which was of little value — “scrap” as the President called it. The collection was sold at public auction in accordance with his wishes and realized $228,000.00. The stamps he received officially from foreign governments were not sold, but are a part of the holdings of the Roosevelt Library.” 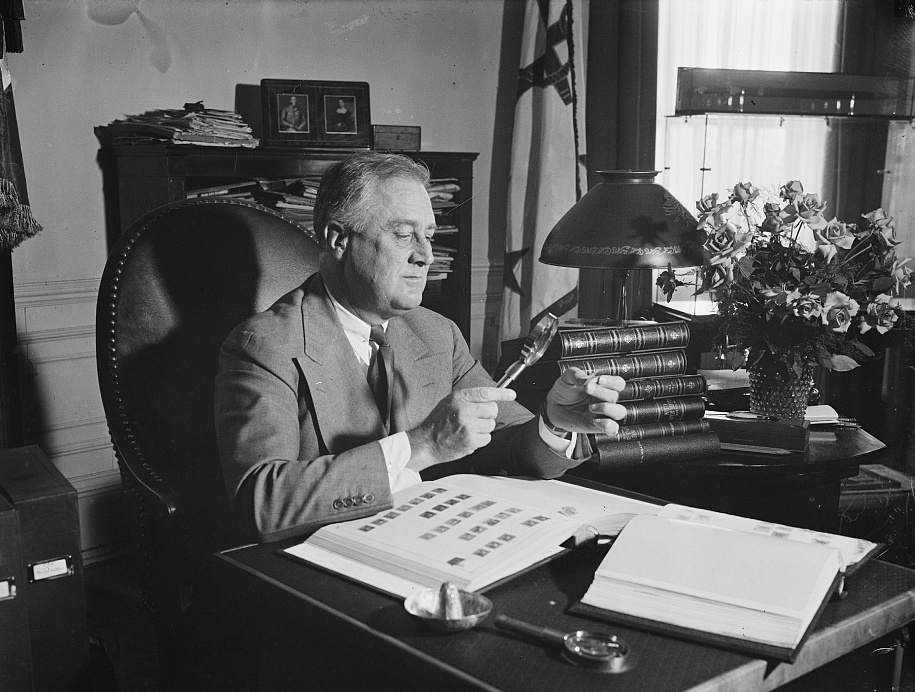 According to the American Philatelic Society,

“President Roosevelt was called the ‘Philatelic President.’ During his presidency from 1933 to 1945 he promoted stamp collecting in many ways. Roosevelt had a hand in every stamp issued during his period in office, suggesting some, designing many and giving his final approval on all issues. He arranged for the issuance of souvenir sheets at national stamp conventions and saw that many stamps had their first days at philatelic events.

FDR, a stamp collector from his youth, joined the APS while he was governor of New York. During his presidency, he regretfully declined invitations to attend any local, national or international philatelic events. However, he always sent an enthusiastic and knowledgeable reply, regretting his inability to attend but wishing he could.

His stamp collection contained an exceptional array of die proofs of 20th century U.S. stamps given to him by the Bureau of Engraving and Printing. It also contained full sheets of the stamps issued during his presidency, signed by post office officials and members of the BEP. His collection included many large and elaborate presentation albums containing unlisted varieties, proofs and essays given him as head of state by many foreign governments.

Roosevelt’s philatelic collections were offered at a series of four auctions by H.R Harmer, Inc., in New York City in 1946. The proof section was described by Clarence W. Brazer. It brought sensational prices. The autographed sheets likewise sold at unexpectedly high prices. The presentation albums also caused a sensation, selling for prices far beyond their estimated philatelic values.

The items from what might be called his ‘regular collection’ consisting of a diverse group of U.S. and foreign stamps and covers, also sold out of proportion to their normal philatelic value. Collectors wanted to own an ‘ex-Roosevelt’ item. What was most astonishing were the prices paid for bulk lots of ordinary, first day and souvenir covers addressed to him from stamp clubs, exhibitions and private collectors. Those lots were broken up, handstamped ‘From the Franklin D. Roosevelt Collection,’ and sold individually to eager collectors.“ 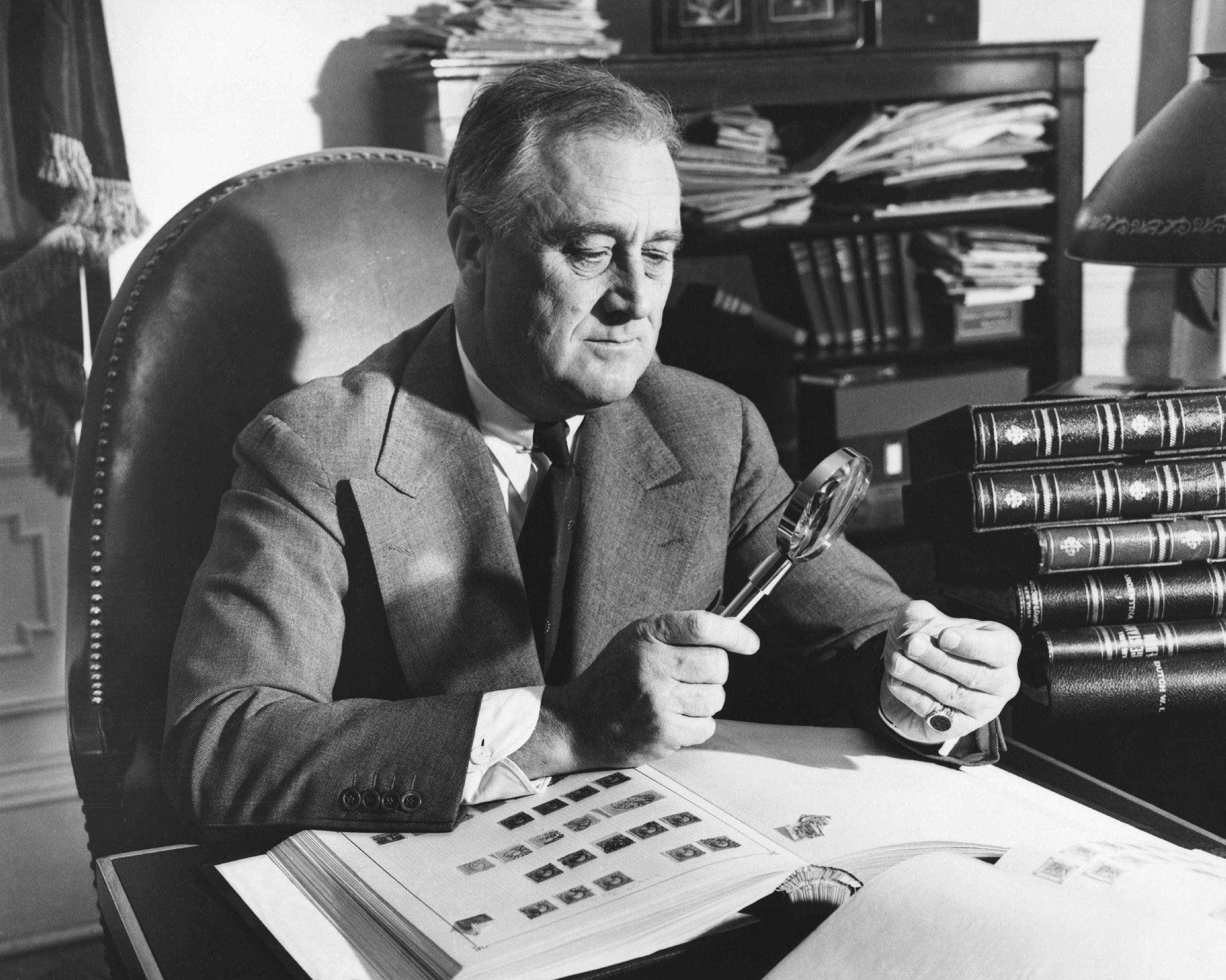 Roosevelt was introduced to philately by his parents in 1890, at the age of 8. Roosevelt immersed himself in the hobby and allegedly begged family members to send him mail and bring him his beloved stamps from around the world. He would collect every stamp that he could lay his hands on. As a result, by the time he was elected president, he had such an enormous collection that he had albums for practically every country in the world.

Throughout his life, his stamps travelled with him in a wooden trunk. He allegedly spent hours each night with his stamp collection and was even involved in approving a new stamp on the day of his death. Roosevelt said of the hobby, “Stamp collecting dispels boredom, enlarges our vision, broadens our knowledge, makes us better citizens and, in innumerable ways, enriches our lives.”