Tribute to Efforts Against COVID-19 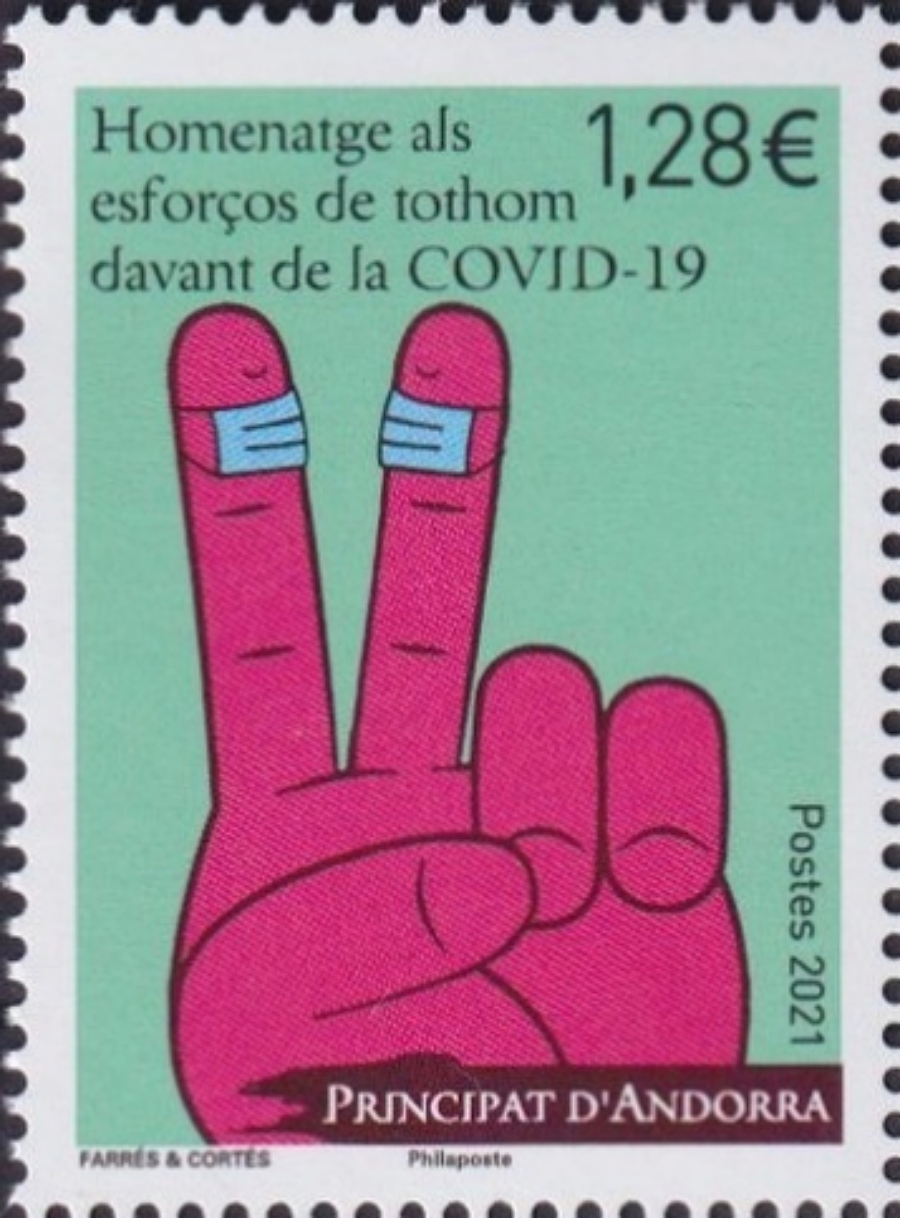 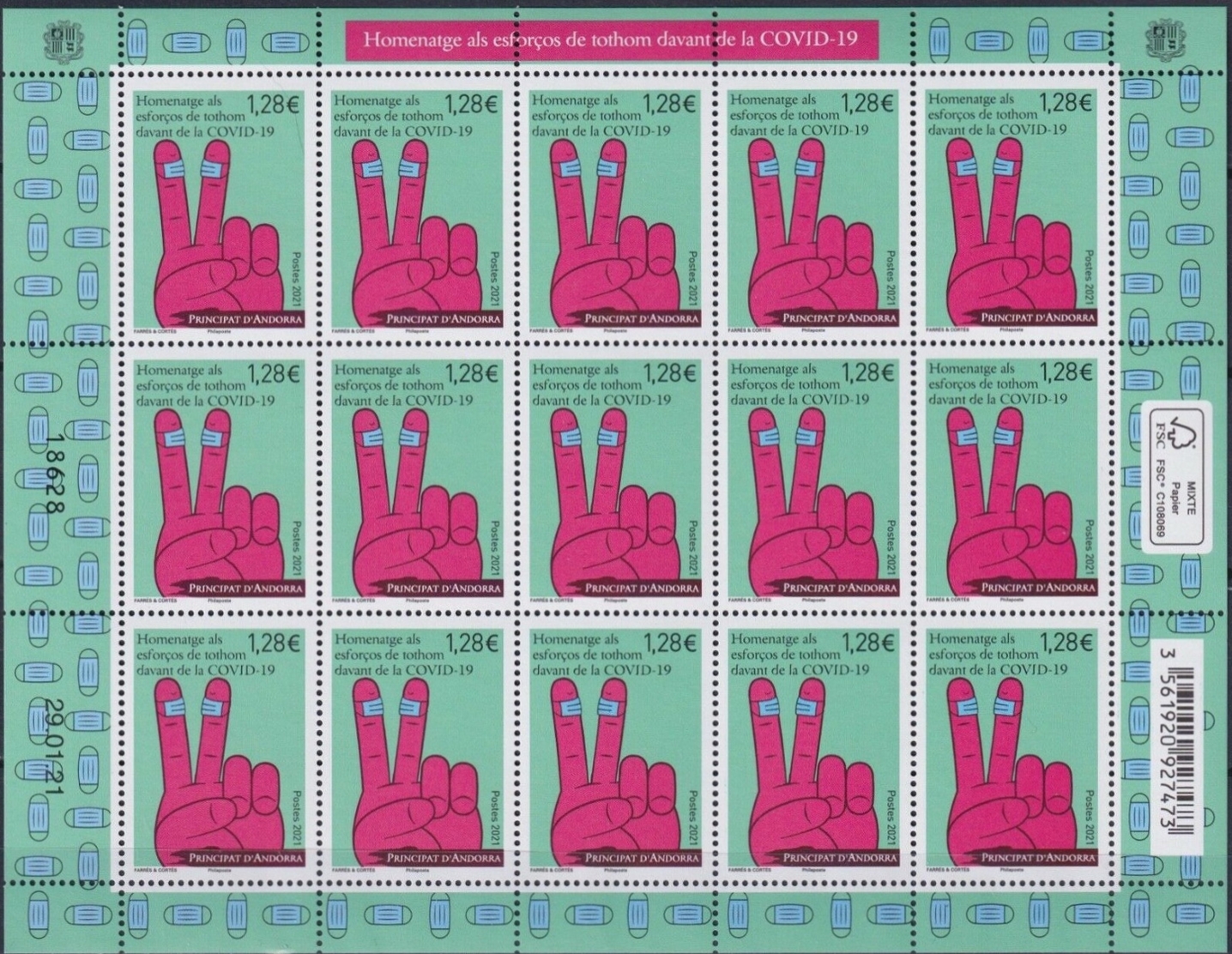 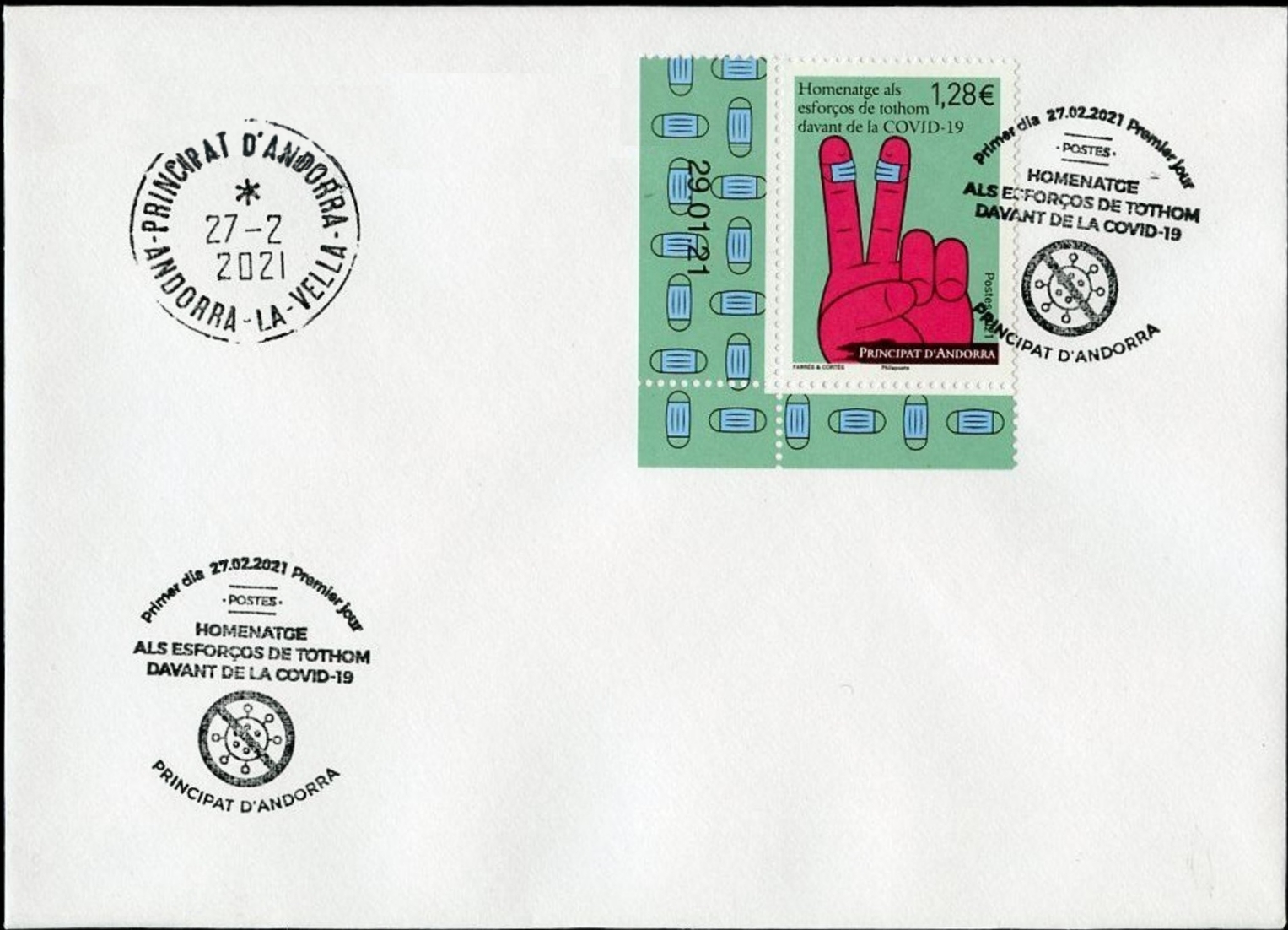 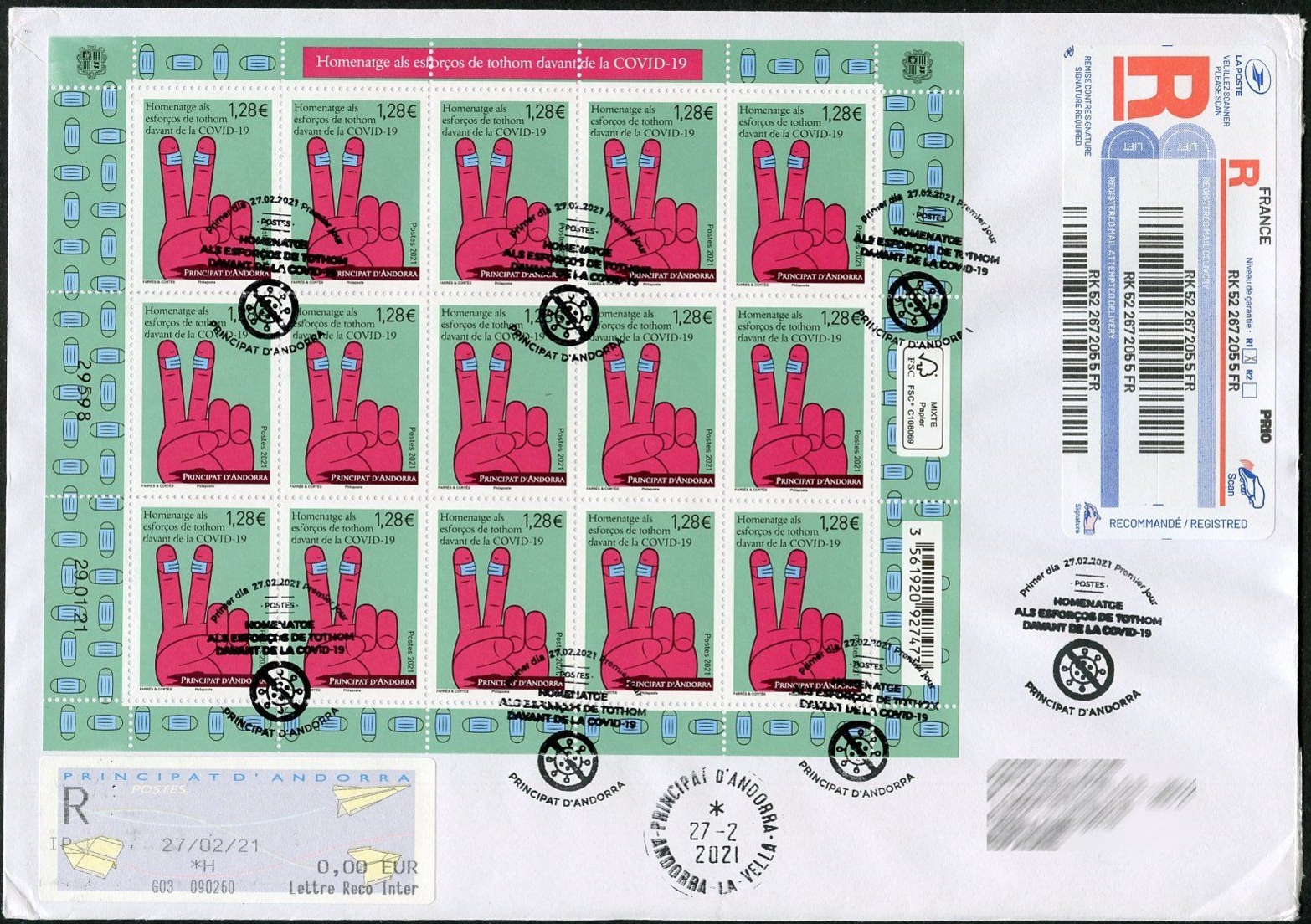 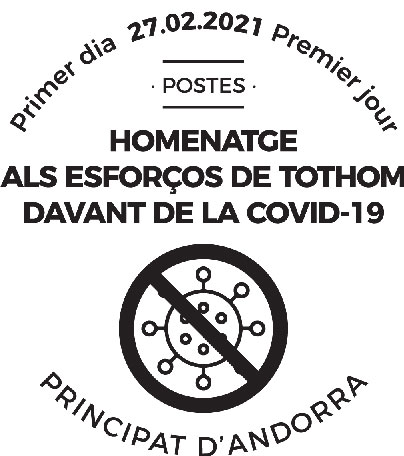 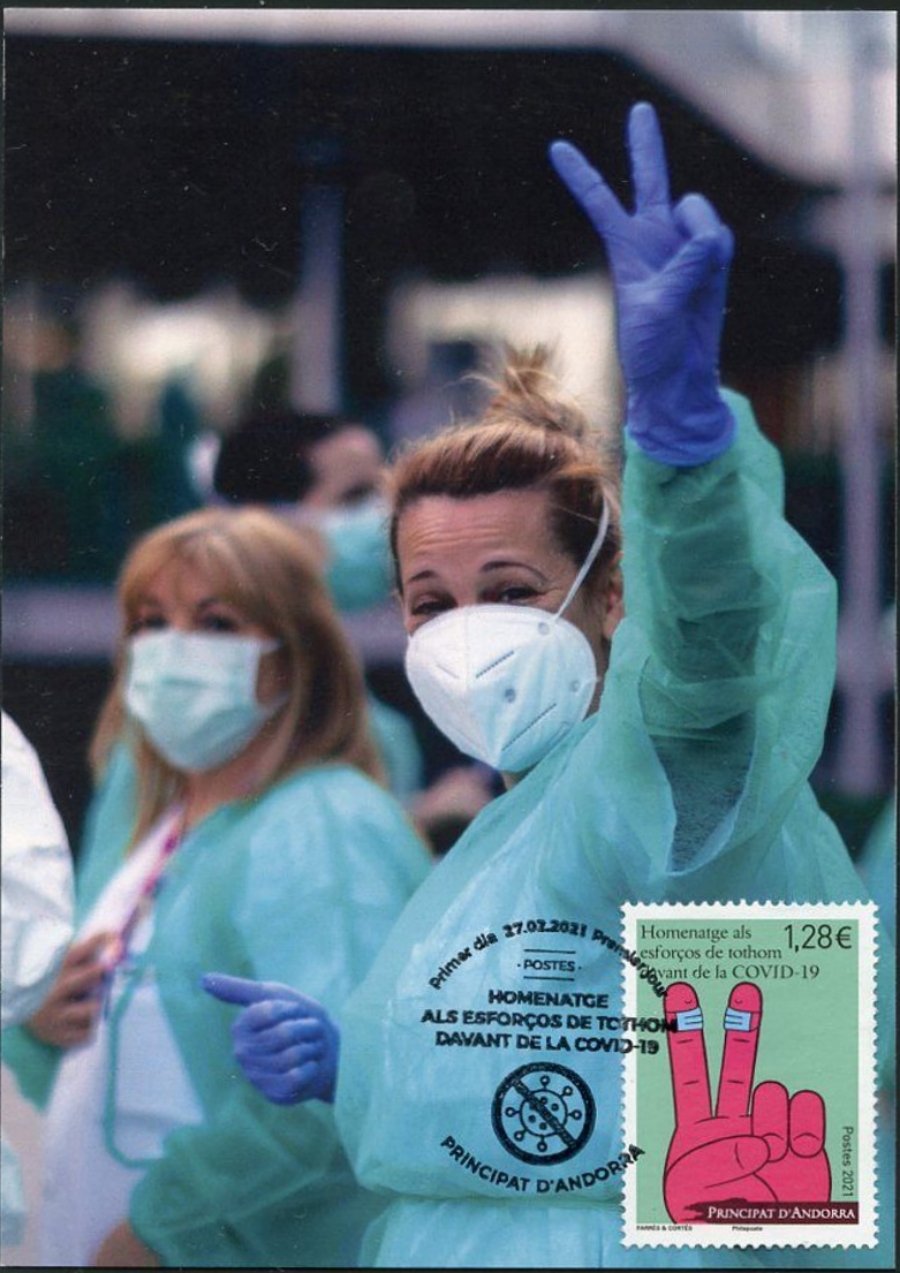 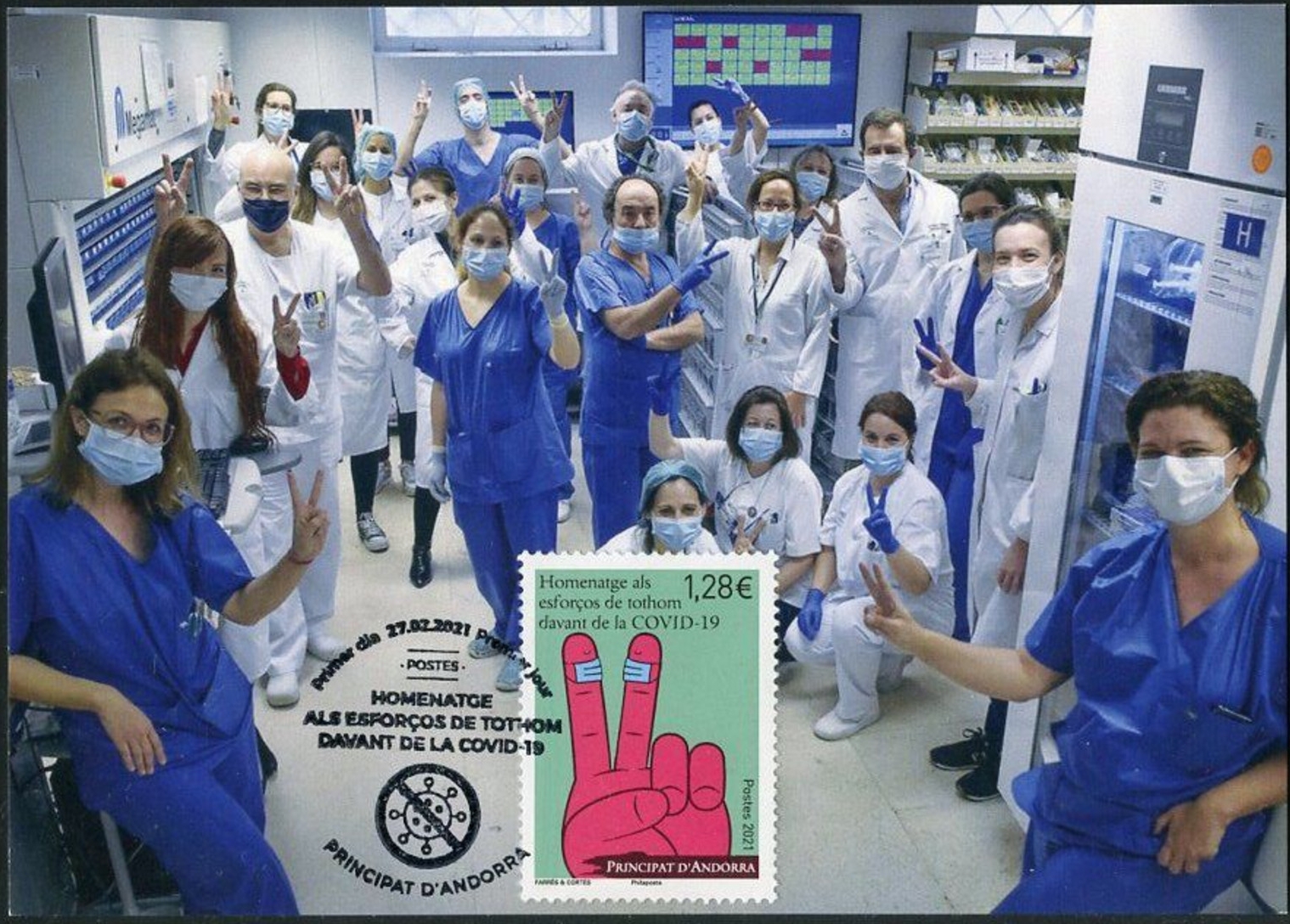 The worldwide pandemic of coronavirus disease 2019 (COVID-19) caused by severe acute respiratory syndrome coronavirus 2 (SARS-CoV-2) was confirmed to have reached Andorra on 2 March 2020, when a 20-year-old man returned to the country from Milan, Italy. The tests conducted showed a positive infection, and he remained in the hospital for further tests whiile his immediate social circle was monitored, the government said in a statement. He was discharged on 8 March.

On 12 March, a second case was confirmed, an 87-year-old woman whose daughter is a teacher. The Government announced that it would close all schools from 16 March.

In an appearance on 13 March Prime Minister Xavier Espot announced that all public establishments would be closed for two weeks except those that provide essential products, gas stations, and pharmacies. The next day, Constitution Day celebrations were cancelled. In addition, the borders were restricted, and people were only permitted to leave for health reasons, to transport goods, or for residents abroad. The sale of tobacco and alcohol to tourists was prohibited, and the quantity permitted to be sold to Andorran nationals and residents was restricted.

On 15 March, it was announced that there were four new active cases in Andorra, making a total of 6 cases (5 of them being active at the time). All four people that contracted the virus had been in contact with the 87-year-old woman.

On 16 March, Espot ordered the cessation of high-risk work activities, such as construction and “liberal” (high-education) professions, for a minimum of eight days, and public administration would be reduced to a minimal level to avoid the collapse of the healthcare system. Meanwhile, the government began working on legal steps to manage states of alarm and of emergency, provided for in the Constitution but never developed in any laws.

The government procured antibody tests at a cost of €1.5 million. While the tests will not be obligatory, being able to prove that one has antibodies can give them access to less restrictive measures.

On 17 March, the toll of cases rose to 39. The Co-Prince Joan Enric Vives Sicília addressed a special televised message calling for the calm gratitude and collaboration among all.

On 22 March, an 88-year-old man became the first confirmed death in the country as the number of cases rose to 112. On 24 March, the third death was confirmed.

On 29 March, the Minister of Health announced that 80 of the active cases were health care staff. Further, Cuba was sending 27 nurses and 12 physicians to aid the SAAS staff.

By 20 April, thirty-six persons had succumbed to the coronavirus in Andorra. From the 1st to the 12th of July, total reported cases remained unchanged at 855, but new cases were reported on 13 July (3 cases), coinciding with the onset of a second wave in adjacent regions of Spain. July 16 marked one month since the last reported death in Andorra. A further 67 cases were reported by 31 July, bringing the month end total to 925 or 1.2% of the population.

During the first half of August, new cases were recorded at an average rate of 4 per day, growing to an average of 12 per day during the second half of the month, reaching 989 by mid month and 1176 by the end of August. The 53rd death was reported on the 12th.

On 12 October, it was announced that Minister of Finance Èric Jover tested positive for COVID-19. The 7-day moving average number of daily new cases reached 112 on 27 October, more than 3 times higher than the first wave, while the number of active cases peaked at 1309 on the same day, compared to 504 in the first wave (11 April). The total number of cases reached 4756 an the total number of deaths 75 by the end of the month.

According to the Andorran government’s COVID-19 Dashboard, updated on 15 February 2021:

The epidemiological situation has remained stable for the past week, with an R rate of 0.9. Hospital pressure figures also remain similar, with 25 people in hospital for COVID-19, 11 of whom are in ICU.

As regards the mortality rate, Andorra continues to have one of the lowest rates in the world, at 1%. The percentage of positive tests in the past seven days is 3.2%.

Andorra continues to be one of the countries conducting the most tests per head of the population, testing 12-17% of the population each week. Increased detection capacity and rapid control of outbreaks thanks to a large team of contact tracers allows the country to reinforce its strategy against COVID-19.