When I moved to Southeast Asia, I left my old life behind in more ways than one. In fact, all that I did not carry with me on those flights from the American Southwest in April 2006 remained in a semi-truck sized warehouse in the northeastern foothills of Albuquerque. What I carted through four or five airports (including plane changes in Phoenix, Los Angeles, Seoul, and Bangkok before my eventual touchdown on Phuket) was one backpack full of clothes and my laptop with other electronics and a huge duffel bag carrying everything else I felt I needed to start my new life. At that point, I planned to return after a year or two. Since I was not actively collecting stamps then, I did not bring anything remotely philatelic with me.

When I eventually realized that I would not be returning to the States, I asked my sister to take care of “getting rid of” all that was in my storage facility. She and my dad took a 900-mile drive down to Albuquerque from Kansas City, sold a number of my things (huge accumulations of not only stamps and covers but also record albums, CD’s, collectibles from my extensive travels, furniture, and even my car) and threw away a great deal as well. While the proceeds of the sales did sustain my life on the other side of the world for quite a few years, I would much rather have the holdings. Occasionally, I recall various items that I once owned and the memories are usually painful.

A small portion of a life left behind…. all of the stamps and covers I collected between circa 1974 and 2005 wound up in here.

….and another of my storage in Albuquerque, New Mexico. I would not see it again, nor most of what if contained.

The red duffle, the backpack, and the laptop seen in this photo were all that I brought with me when I moved to Thailand 15 years ago.

Aside from what was happily housed within albums, much of my material was relegated to boxes upon boxed upon boxes. When I returned to stamp collecting not long after becoming settled on Phuket island, I strived to be as organized as I could be and have scanned everything as I have obtained it. The items then go into small storage bins (for most covers and postcards) and stockbooks (for almost everything else) with their locations noted either in the scan file or a spreadsheet. I have dabbled in various inventory software from time to time but most of these prove inadequate in some way.

Occasionally, I come across an item and purchase it because it sparks a memory of what I once owned. For example, my first day cover of the 50th anniversary of Charles Lindbergh’s transatlantic flight (which I am sure will be the subject of a future “A Cover A Day”) harkens back to the very first FDC I owned. My mother enrolled me in the Postal Commemorative Society shortly before its release on 20 May 1977. My current copy is one with the wonderful ArtCraft steel-engraved cachet, complete with the tiny PCS logo. However, I do wish I had the original with my address typed in the distinctive “cursive” type-font on it. Some things can never be fully replaced.

Today’s cover is similar in nature, although not even a close match to the original. Still, it sparks some fond memories.

In late 1979, I began to dabble in creating my own cachets for a limited number of first day covers. My first attempts were in the fall of that year using the first stamps the United States issued for the following summer’s Olympic Games to be held in Moscow. I distinctly remembered recreating the logo with the curved lines and the star at the top and then hand-painting it. I was quite the budding artist in those days!

As the winter games in and around the Lake Placid, New York, area approached that winter I went full-tilt in designing cachets not only for the first days of issue of the stamps and postal stationery but also for many of the special cancellations. I had covers and cards from the torch relay, each of the event venues and much, much more. I also collected a large amount of ephemera associated with the 1980 Lake Placid games including ticket stubs, programs, autographed items, etc. When Randy Gardner was disqualified from the gold medal event in ice skating due to a pulled groin muscle, I wrote a condolence card to him and received a wonderful handwritten reply from his partner, Tai Babilonia, whom I was hopelessly in love with at the age of 15. 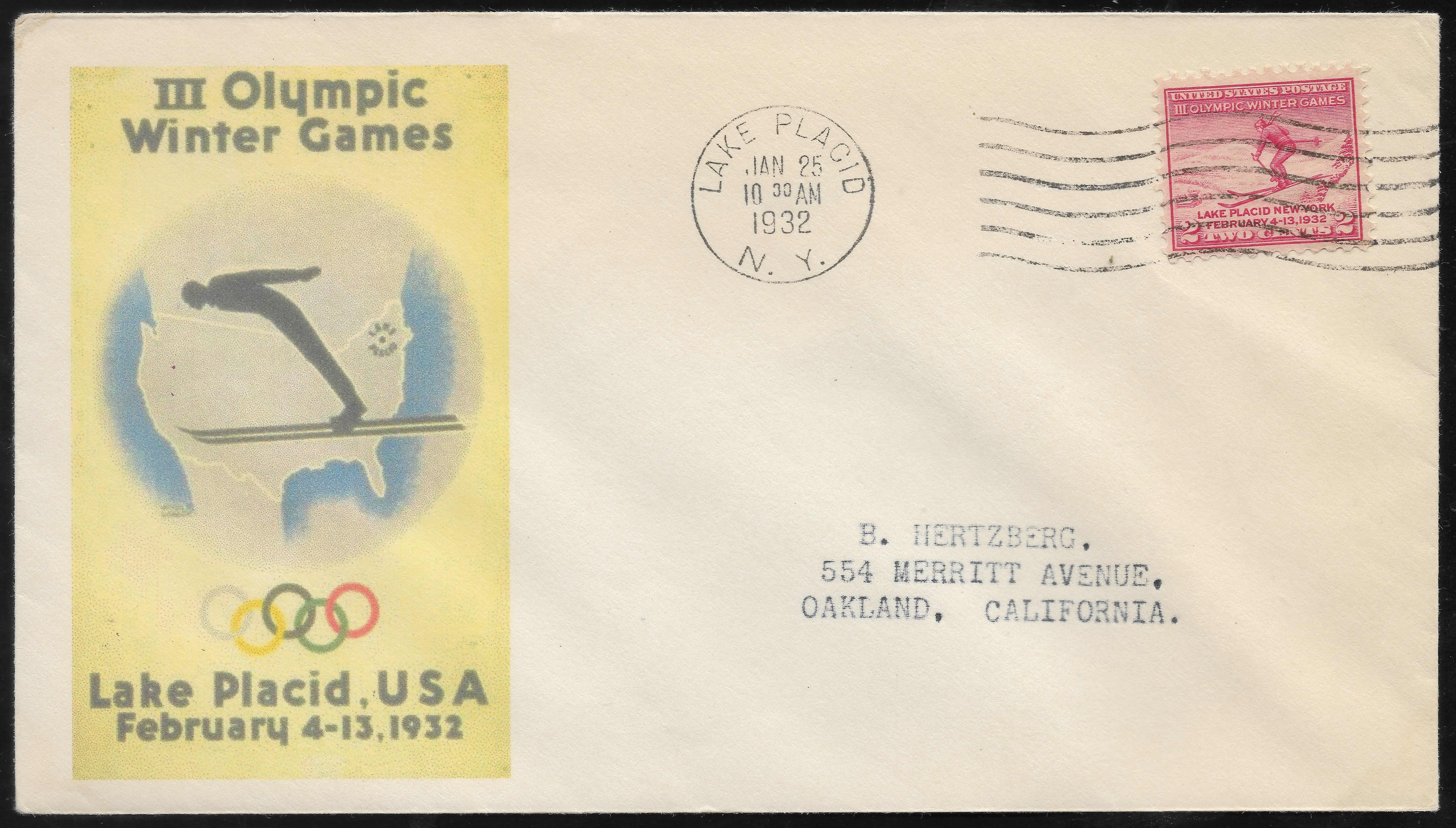 By extension, I also began collecting items from the previous Olympics held at Lake Placid (all of this was the start of what became a fairly comprehensive Olympics thematic collection). Sometime in the mid- to late 1980s, I won at auction a first day cover of the U.S. stamp released for the 1932 games with a cachet by Albert C. Roessler, if memory serves me correctly. I do recall it was one of the most expensive items purchased for my collection up to that time.

Today’s cover certainly is not a Roessler cachet — bearing a colorful sticker and far, far less expensive — but I am happy to have it nonetheless for it sparked a wealth of memories from my previous philatelic pursuits. Many of these posts (and those of “A Postcard A Day” on my Postcards to Phuket site) are causing me to remember so many great events from my collecting youth which was not really my intention when I started the series two weeks ago.  It is a happy result and there are more memories yet to come.