More often than not, I find stamps from Great Britain that simply take my breath away with their design. I absolutely love this 2001 set picturing the fronts of double-decker buses, showing their evolution from left to right, as seen on today’s random cover. 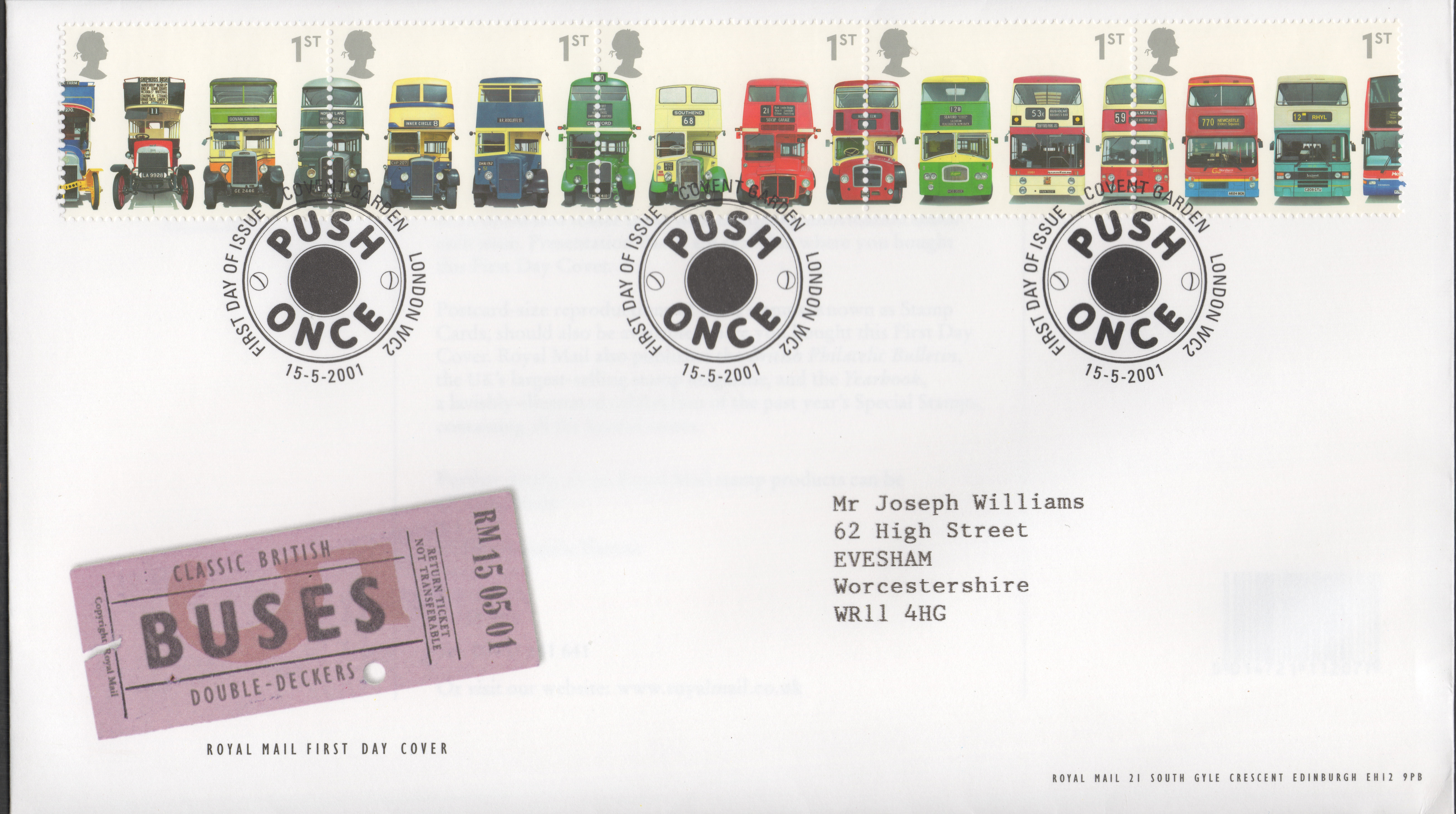 Horse-drawn carriages and carts had been a convenient mode of transportation for the aristocracies in France and Great Britain since medieval times. As European economies became more urbanized and the populations of Paris and London began to swell in the early 19th century, the need appeared for a cheap and effective method of transporting the masses of factory workers to and from their jobs. In the 1820’s large carriages known “omnibuses”, capable of carrying many passengers at a time, appeared. These were horse-drawn. Over time, these got larger and larger and could carry an ever-increasing number of people. The London General Omnibus Company was the first to introduce a regular schedule with fixed routes.

The first commercial horse-drawn double-decker omnibuses were introduced in England in 1847 by Adams & Co. of Fairfield, Bow. The company had hit on a clever way to double the number of passengers without increasing the length of the bus — they added an open-air upper deck, accessed by a ladder, with a number of bench seats that ran along the sides. The first bus company to use them was the Economic Conveyance Company. Although the passengers did not like being exposed to London’s famously chilly and rainy weather, the tickets for the upper deck were only half-fare, an important consideration for the city’s working poor.

The idea was then improved upon by John Greenwood, who introduced a new double-decker in 1852. Greenwood made his bus larger; it could hold 42 people and required a team of three horses to pull it. Soon several different companies were running lines of double-decker horse-drawn buses all across the city of London. More improvements followed: the long benches were replaced by forward-facing seats, and a stairway was added to give access to the upper deck, making ladders unnecessary.

By the 1880’s the horse-drawn bus was facing competition from two directions. In Berlin, the era of state-run public transportation had begun, as the city installed a network of trams that were driven by electric motors. These could carry a larger number of people and were cheaper to run and to ride. And the gasoline internal combustion engine was changing the face of transportation. In 1898, the Daimler Company introduced the first motor-driven bus, in Berlin, with a top speed of 12 mph. By the end of World War One, the horse-drawn vehicle was obsolete. The last horse “omnibus” in London closed down in 1914.

The first engine-powered double-decker bus appeared in London in 1923. At this time, there were a shortage of buses in London and various companies competed against each other for bus dominance. By 1924 there were over 200 independent buses operating in the city, running along popular routes. Such independent buses were known as “pirate buses”. Not shackled to an official route, pirate buses would sometimes take side streets and alternative routes to get to destinations faster. It was because of the competing bus companies that London General Omnibus Company — the biggest operator in the city —painted their buses red to stand out from the competition. The Metropolitan Police approved of the red buses; the colour was so easy to spot acting as a warning to those crossing the street.

The most iconic version of the London double decker bus is the Routemaster, which most modern designs are now modeled after. Designed in 1956, the Routemaster bus operated for more than half a century in the capital. Most city buses were built from metal bodies attached to steel “ladder” chassis, but the Routemaster was made using an aluminum-alloy shell to which two “sub-chassis” were attached at the front and rear. This made it lighter and more fuel-efficient. It also had advanced features like an automatic transmission, power steering and brakes, and independent suspension.

It was most famous for its open rear entrance, which also caused its eventual decline in use. The Routemaster was the cause of many accidents as people ran and jumped onto it whilst it was in motion or jumped off before an official stop. It was also very challenging for elderly and handicapped people to use easily. Eventually it was replaced in 2005 by modern double decker buses. 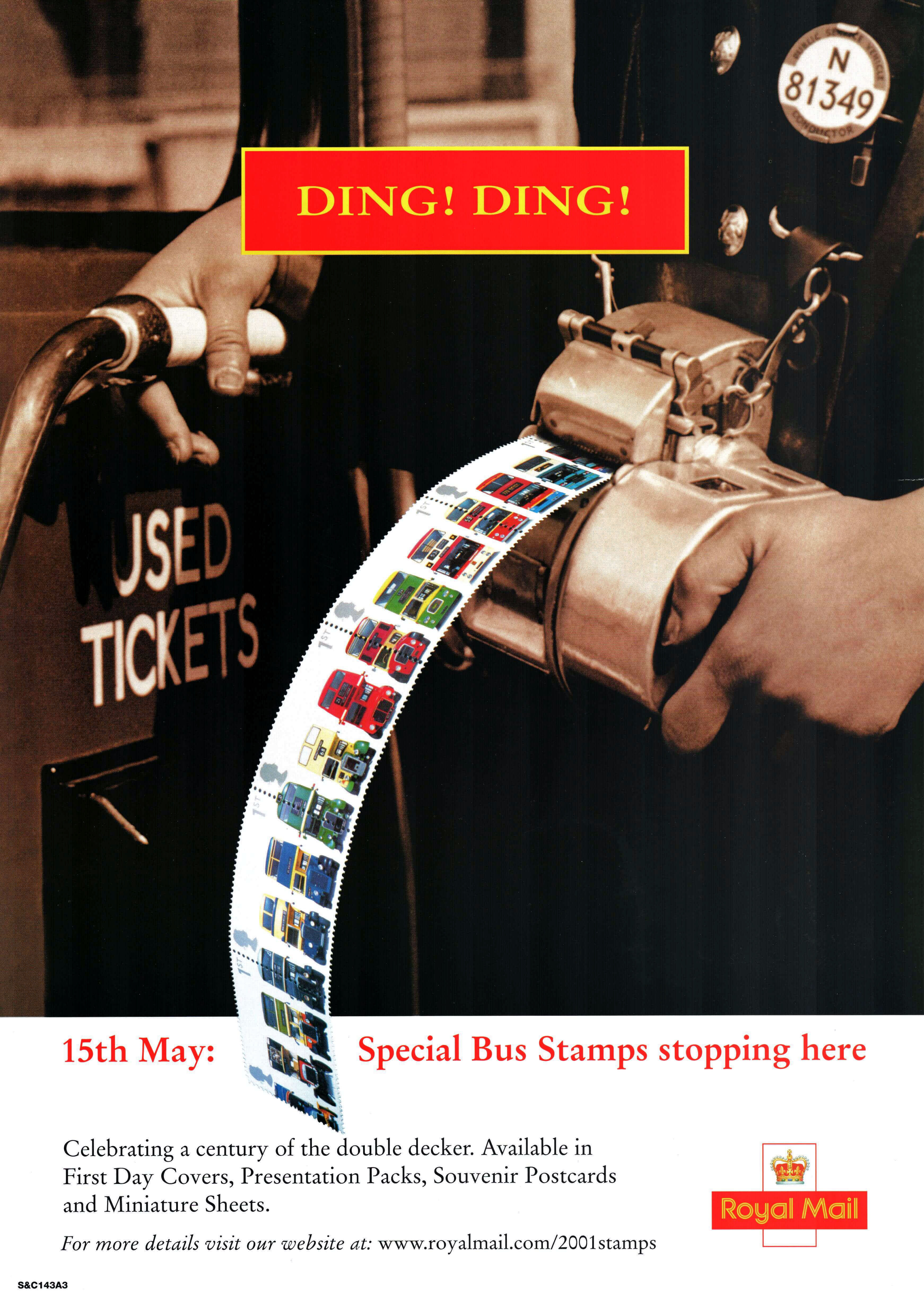 Double-decker buses are in common use throughout the United Kingdom, and have been favored over articulated buses by many operators because of the shorter length of double-deckers and larger amount of seating capacity; they also may be safer to operate through the narrow streets and tight corners common in the UK. The majority of double-decker buses in the UK are between 9.5 metres (31 ft 2 in) and 11.1 metres (36 ft 5 in) long, the latter being more common since the mid-1990s, though there are three-axle 12-metre (39-foot-4-inch) models in service with some operators. Double-decker coaches in the UK have traditionally been 12.0 metres (39 feet 4 inches) in length, though many newer models are about 13.75 metres (45 ft 1 in).

In 1941, Miss Phyllis Thompson became the first woman licensed to drive a double-decker vehicle in the United Kingdom. She drove for the bus company Felix Bus Services, then at Hatfield near Doncaster.

The red double-decker buses in London have become a national symbol of England. The majority of buses in London are double-deckers. The last remaining Routemasters in use finally retired from general service in 2005. Transport for London has continued to keep these vintage buses in operation on heritage route 15H; there was formerly a second heritage route (9H) but this ceased operation in 2014 due to low patronage and increased operation costs.