When I left the United States to live in SE Asia, the food truck craze hadn’t really gone nationwide yet.  There were, of course, the taco trucks of L.A. and a good variety of trucks were to be found during my visits to Portland, Oregon, but most cities simply did not have many if any at all. We have them in southern Thailand but they were only popular for a brief time three or four years ago and the COVID-19 pandemic has really killed off the few remaining here. My favorite was a converted Bangkok-style tuk tuk that sold the best chili burgers that I have ever tasted (mixing Thai and American Southwest spices). We do have tons of food carts, usually constructed on the sidecar portion of a 110-cc Honda motorbike. These are highly maneuverable in the heavy traffic and can fit into small spaces, handy for the markets where the promoters like to pack in as many booths and food stalls they can.

I would much rather buy my food from a little window or counter on such a mostly-outdoor eatery than go inside a much fancier restaurant. Perhaps that goes all the way to childhood summers largely spent waiting to hear the bell from the ice cream truck. Having been born in Texas, I am also fascinated with the history of the old cowboy chuck wagons and similar mobile kitchens. In 1991, the United States Postal Service marked one portion of that heritage with a 23-cent entry in its popular Transportation coils series of stamps, a pair of which grace the first day cover illustrated today. 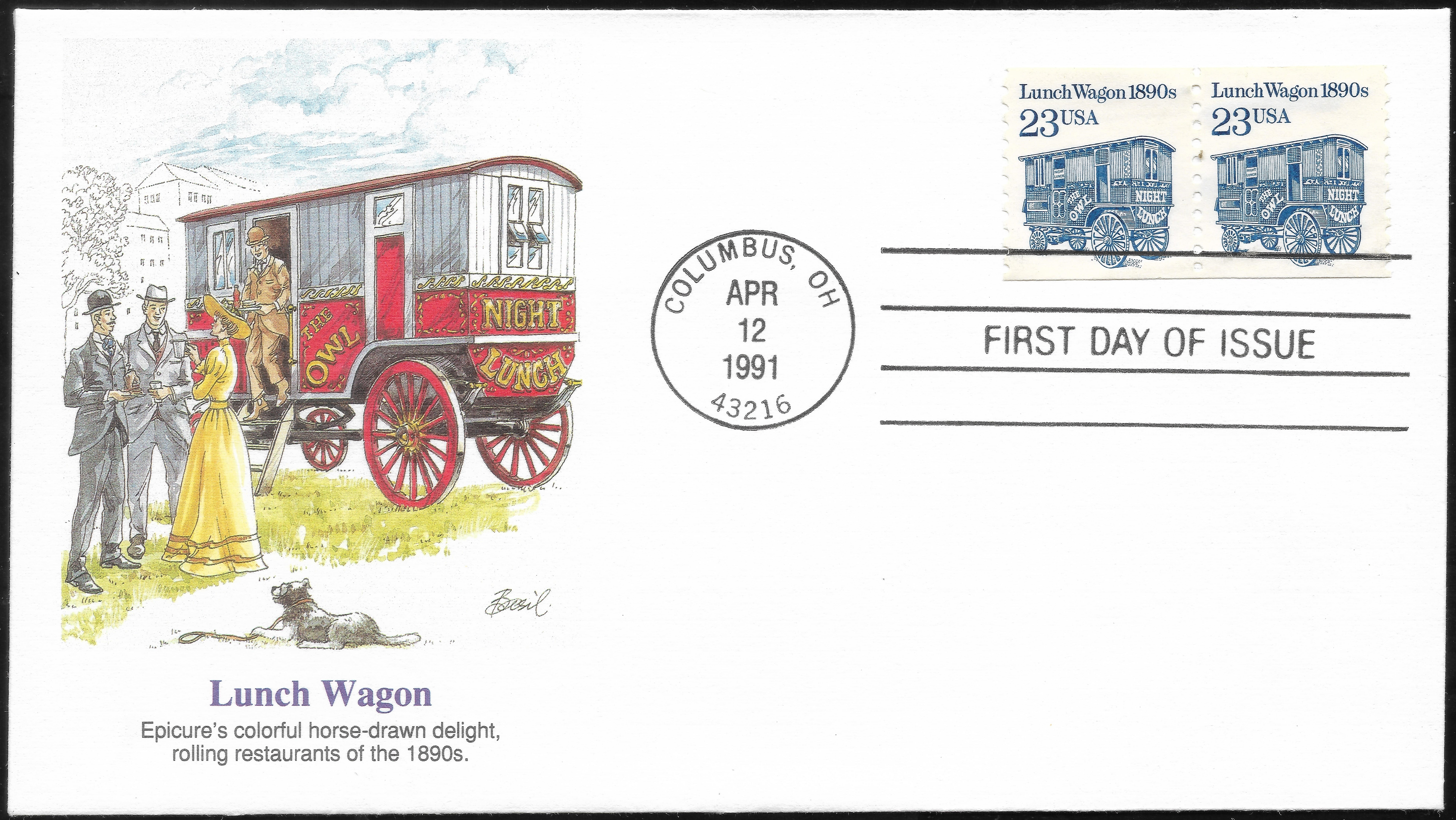 A history of food trucks in the United States would probably start with in 1866 when the “father of the Texas Panhandle”, Charles Goodnight, fitted a sturdy old United States Army wagon with interior shelving and drawers, and stocked it with kitchenware, food and medical supplies. This was made to suit the needs of cowboys driving cattle from Texas to sell in New Mexico. Goodnight added a “chuck box” to the back of the wagon with drawers and shelves for storage space and a hinged lid to provide a flat working surface. A water barrel was also attached to the wagon and canvas was hung underneath to carry firewood. A wagon box was used to store cooking supplies and cowboys’ personal items.

Chuckwagon food typically included easy-to-preserve items like beans and salted meats, coffee, and sourdough biscuits. Food would also be gathered en route. There was no fresh fruit, vegetables, or eggs available and meat was not fresh unless an animal was injured during the run and therefore had to be killed. The meat they ate was greasy cloth-wrapped bacon, salt pork, and beef, usually dried, salted or smoked. The wagon was also stocked with a water barrel and a sling to kindle wood to heat and cook food. On cattle drives, it was common for the “cookie” who ran the wagon to be second in authority only to the “trailboss.” The cookie would often act as cook, barber, dentist, and banker.

The term “chuck wagon” comes from “chuck”, a slang term for food, and not from the nickname for “Charles”. 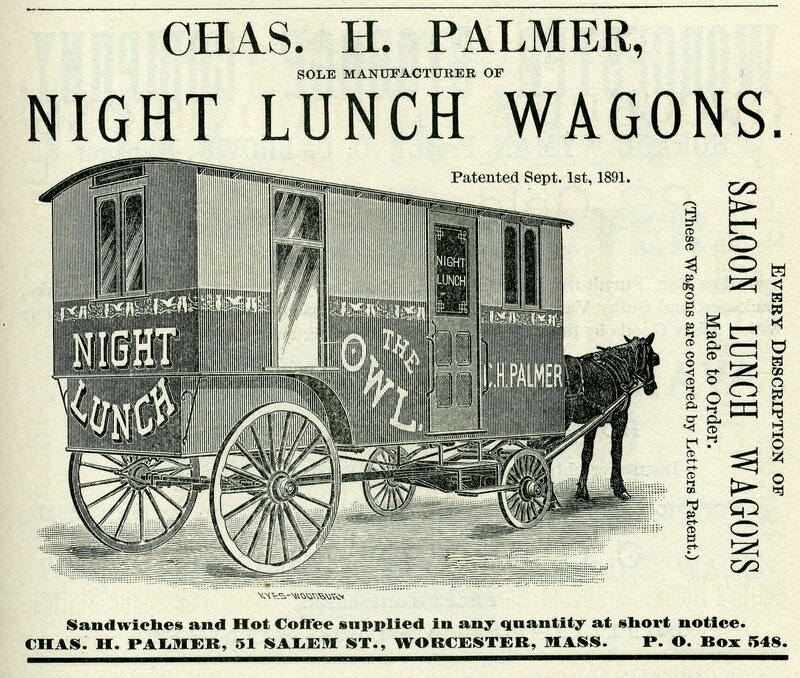 The lunch wagon was another early relative of the food truck, as conceived by food vendor Walter Scott in 1872. Scott cut windows in a small covered wagon and parked it in front of a newspaper office in Providence, Rhode Island. He sold sandwiches, pies and coffee to pressmen and journalists. By the 1880s, former lunch-counter boy, Thomas H. Buckley, was manufacturing lunch wagons in Worcester, Massachusetts. He introduced various models, like the Owl and the White House Cafe, with features that included sinks, refrigerators and cooking stoves, also colored windows and other ornamentation. New York City soon followed Worcester and other New England cities by having lunch wagons in the 1890s, located in places as Herald Square, Madison Square and Union Square.

Coming out at dusk, the lunch wagons would pick up business after restaurants closed, serving workers on the late shift, newspapermen, theatergoers, anyone out and about after dark and hungry for an inexpensive hot meal. A fellow would get his food from the wagon’s window and eat sitting on the curb. The lunch wagons sold so many frankfurters that they were called “dog wagons” in the 1890s, giving rise to the name “hot dog.”

While Scott’s original wagon was a renovated freight wagon, lunch-wagon makers began to design aesthetically pleasing vehicles. Etched-glass windows and colorful exteriors beckoned eaters inside, and the interiors were “painted up with fleur de lys and amazing murals” that echoed the work of old Dutch masters. Gutman, who studied architecture, notes that lunch wagon designs mirrored trends in commercial architecture at the time. According to the Cincinnati Enquirer, the first such-decorated wagon that rolled onto the streets of Worcester caused a sensation. When another debuted in Ogdensburg, New York, people gathered to stare open-mouthed at its “Aladdin-like” interior. The Enquirer described the popular wagon style as having elegant carvings, skilled paintwork, and amenities such as sinks for washing dishes.

Proprietors typically stood behind small counters, heating food on grills and dispensing coffee from elaborate urns to patrons inside and out. The average size of the wagons was eight by 14 feet. Buckley’s wagons were particularly sensational. “They were described as perfect little palaces,” says Gutman.

Gaining popularity, the lunch wagons evolved into “rolling restaurants,” with a few seats added within, first by Samuel Jones in 1887. Folks soon started referring to them as “lunch cars,” which then became the more genteel-sounding “dining cars,” which was then, around 1924, shortened to the moniker “diner.” 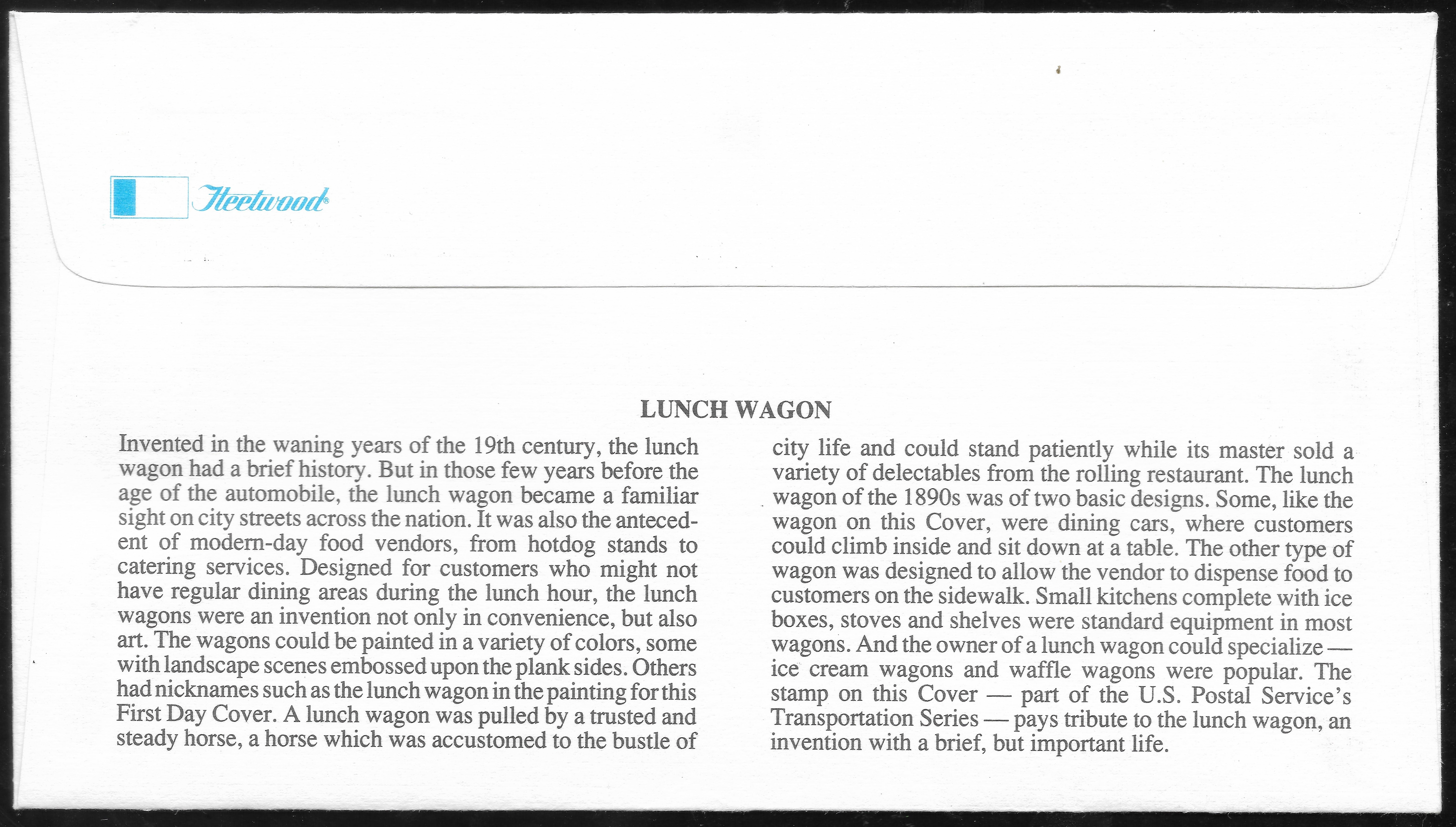