I really had to force myself to sit down at the laptop and put this blog together tonight; it was just one of those kinds of days and the evening remains extremely hot. It’s never much fun to write when sweat is dripping off your nose and covering your back. February is truly the hottest month in a year full of them. Today’s cover is from a place which I imagine to be much, much colder at this point in time. 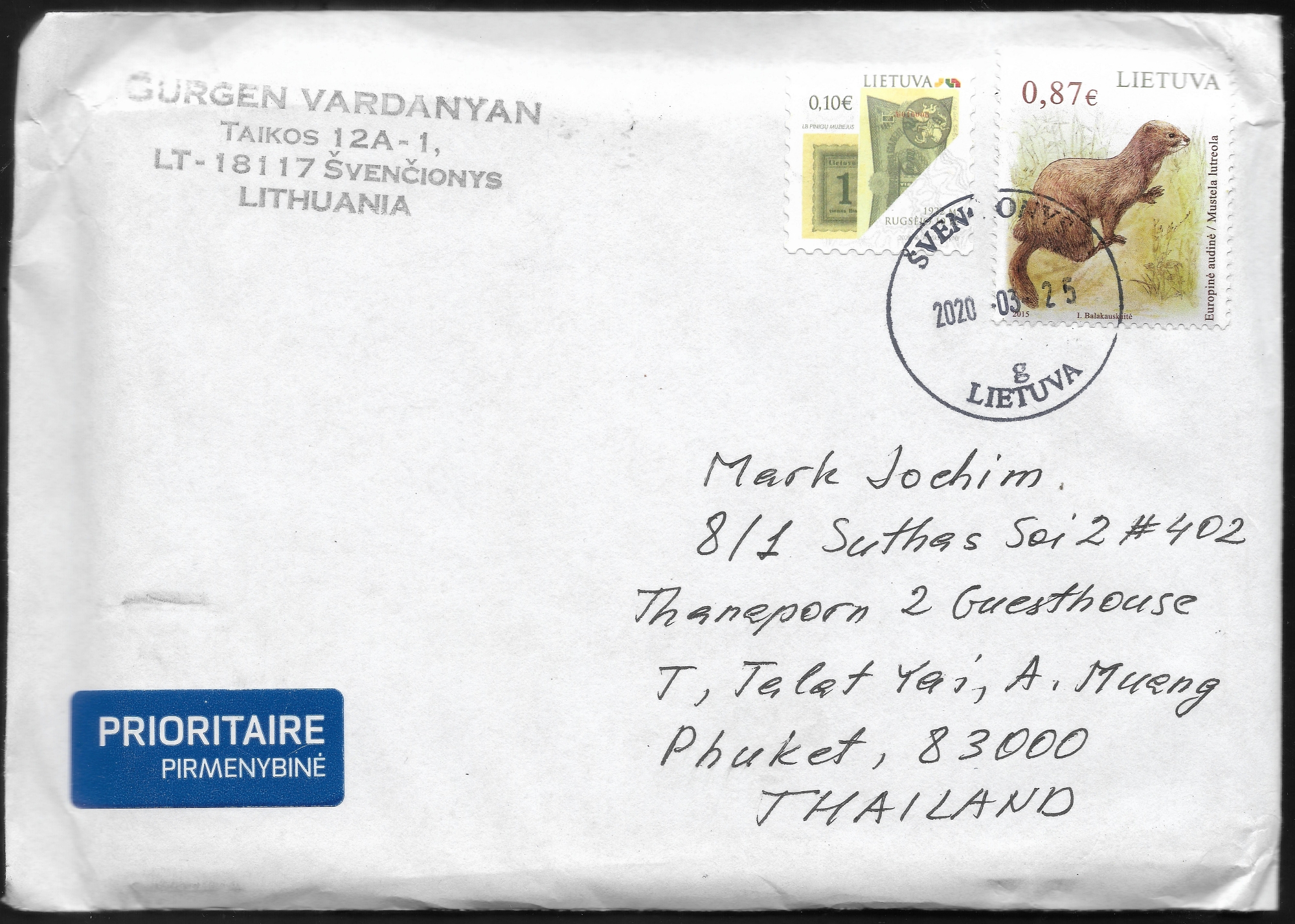 Švenčionys is a town located 84 kilometers (52 miles) north of Vilnius in Lithuania, one of the Baltic states of Europe. It is the capital of the Švenčionys district municipality. As of 2020, it had population of 4,065 of which about 17% is part of the Polish minority in Lithuania.

One of the oldest towns in the Grand Duchy of Lithuania, the settlement was a major center of Nalšia. Grand Duke Vytautas settled Lipka Tatars in the town and built a Catholic church in 1414. The place grew from the 14th to 16th centuries, becoming the site of a local court and monastery. From 1801 the town was part of the Russian Vilna Governorate and grew significantly after completion of the Saint Petersburg–Warsaw Railway in 1862, but eventually lost competition to Švenčionėliai, which grew around the train station. At the turn of the 20th century the town had one Greek Orthodox church and one Roman Catholic church.

During the 1812 French invasion of Russia, Napoleon stayed in the town for 12 hours to write orders and receive an envoy from the King of Naples. The town was one of the main centers of the November Uprising (1830–1831) in Poland and Lithuania against the Russian Empire. During World War I, it was the location of the German Sventiany Offensive.

The city was part of the Second Polish Republic for most of the interwar period. It had a significant Jewish population (according to the 1897 Russian census – 52%), but during World War II, under German occupation, the Švenčionys Ghetto was established. It operated from July 1941 to April 1943. At its peak, the ghetto housed some 1,500 prisoners. The Jewish inhabitants were deported and murdered. It was a powiat centre in Wilno Voivodeship as Święciany during Polish rule between 1920-1939.

On 18 September 1939, Švenčionys was occupied by the Red Army and, on 14 November 1939, incorporated into the Byelorussian SSR. The Soviets placed it firstly in part of Vileyka Oblast of the Belorussian SSR in 1939 but then incorporated into the Lithuanian SSR on 25 November 1940. Švenčionys was occupied by the German Army from 27 June 1941 until 7 July 1944 and placed under the administration of the Generalbezirk Litauen of Reichskommissariat Ostland. In 1942 the Lithuanian Security Police murdered several hundreds of Poles in the village. Most of the municipal area remained part of the Lithuanian SSR except the Ashmyany region which was reincorporated into Belarus in 1944. 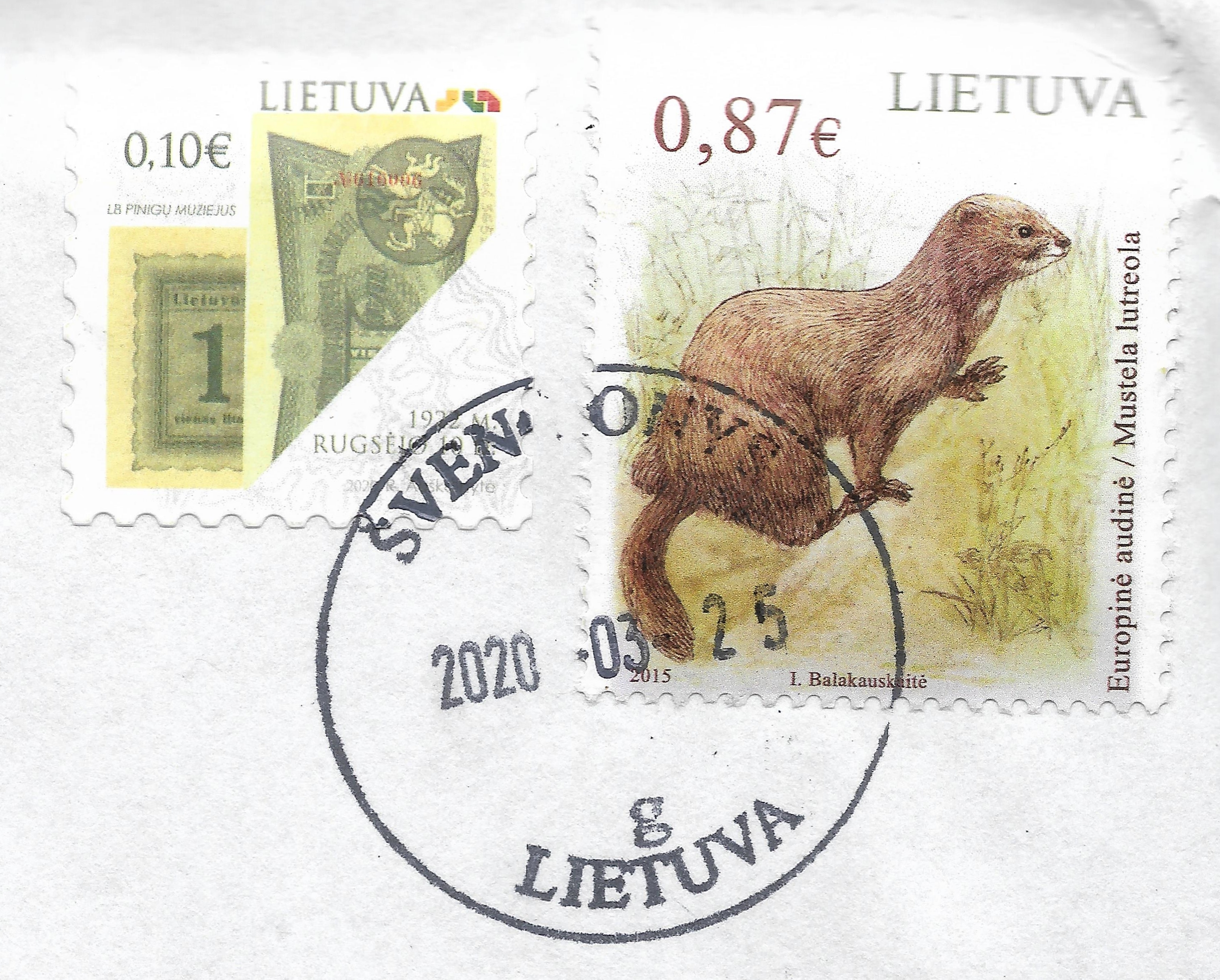 The stamps on this cover are quite nice. The one on the left was Lithuania’s first stamp released in 2020 with an issue date of 17 January.  Cataloguing as Scott #1157 (or #1320 in the Michel catalogue), the stamp depicts the first banknote of the country which began circulation in 1922. They had the portrait of Lithuania’s coat of arms and were of poor quality which made them easy to counterfeit. There are three self-adhesive stamps in Lithuania’s 2020 Historical Bank Notes set.

The second stamp was issued on 17 January 2015 and pictures the European Mink (Mustela lutreola), also known as the Russian mink and Eurasian mink. It is similar in colour to the American mink, but is slightly smaller and has a less specialized skull. Despite having a similar name, build and behavior, the European mink is not closely related to the American mink, being much closer to the European polecat and Siberian weasel (kolonok). The European mink occurs primarily by forest streams unlikely to freeze in winter. It primarily feeds on voles, frogs, fish, crustaceans and insects.  It was one of two in the Red Book of Lithuania – Otters set and is Scott #1046 (Michel #1183).

The cover was mailed on 25 March 2020 but did not reach my home in Thailand until 5 August, delayed as was most mail last year by the COVID-19 pandemic. Mail times are a little better thus far in 2021 but there are still many places where it is not possible to send mail to. Mail does seem to be traveling out of Thailand once it get to Bangkok and some mail is making its way down to Phuket but it is difficult, in my case, to even get it off of my island at the moment. I will have to live with extreme Snail Mail for a bit longer, I fear.