Many times, I will purchase a cover simply based on a memory. Place names play a big role and I have numerous items from places that I have lived or merely visited at some point in my life. Some of these are in the general vicinity of places that I once had some connection to.

Today’s cover falls in the latter category. My mother was born in the town of San Luis Obispo which is located in Southern California’s Central Coast region, approximately 190 miles (310 km) north of Los Angeles and 230 miles (370 km) south of San Francisco. It was founded in 1772 by Spanish Franciscan Junípero Serra and as such, San Luis Obispo is one of California’s oldest European-founded communities. Serra’s original mission was named after the 13th-century saint and bishop Louis of Toulouse. 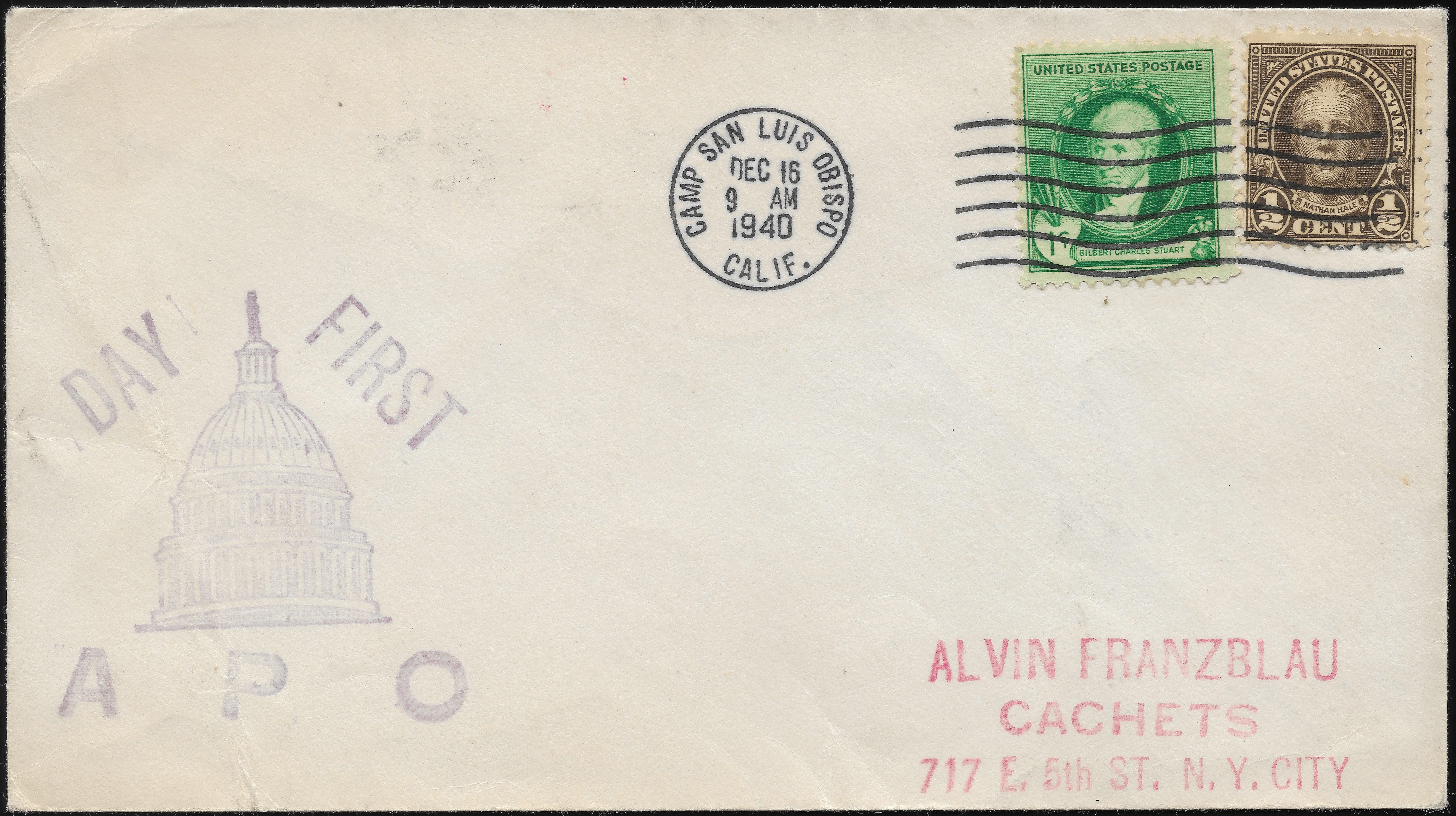 As my grandparents still lived in town during my youth, we visited many times. Both of them served in the U.S. Navy during World War II (grandpa was at one point the Pacific Fleet’s cribbage champion) and they encouraged my burgeoning hobby of stamp collecting. I recall finding books on their shelves that piqued various collecting interests including Samuel Eliot Morison’s Admiral of the Ocean Sea (about Christopher Columbus), a book about Tin Can Mail Island (Niuafoʻou in the Kingdom of Tonga), and the Bounty Trilogy by Charles Nordhoff and James Norman Hall. To this day, I avidly topical stamps and covers associated with Pitcairn Island, Columbus, and Tin Can Mail.

I also grew up hearing the names (and visiting the places) of Cal-Poly (where my Aunt Edwina was attending university during one mid-1970s visit), Morro Bay (fond memories of a certain restaurant at the end of a pier there), and Camp San Luis. At this point, I cannot recall if either of my mother’s brothers had any military training at the former Army base but I do believe we took a drive through the compound during one visit to SLO Town.

Camp San Luis Obispo at one time served as an Infantry Division Camp and Cantonment Area for the US Army during the second World War. Today, it’s still maintained and includes a heliport, warehouse complex, workshops, maintenance facilities, administrative buildings, chapels, two service clubs, two theaters, laundry and post exchange. The history of Camp San Luis Obispo is closely tied to Camp Merriam and the Baywood Park Training Area. While most of the training facilities in California have been closed or greatly minimized, Camp San Luis Obispo continues to be a high quality training camp with field and garrison facilities. The camp continues to provide operational, logistical support and training to all kinds of civilian and military agencies at the local, state and federal areas.

The California Legislature originally created the California Militia in 1850. The militia became the California National Guard in 1928 and trained at areas that were available such as ranches, state parks and other open fields. After World War I, the need grew for a training site and thus led to the creation of Camp Merriam in San Luis Obispo. The name would change to Camp San Luis Obispo in 1940 when the Army began training at the site. 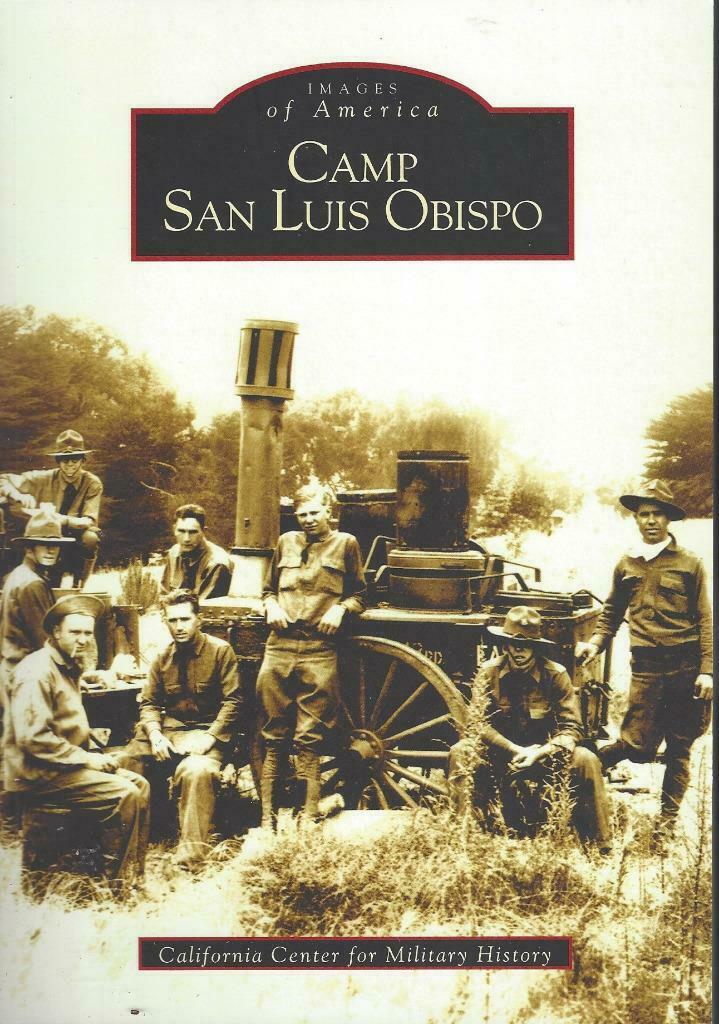 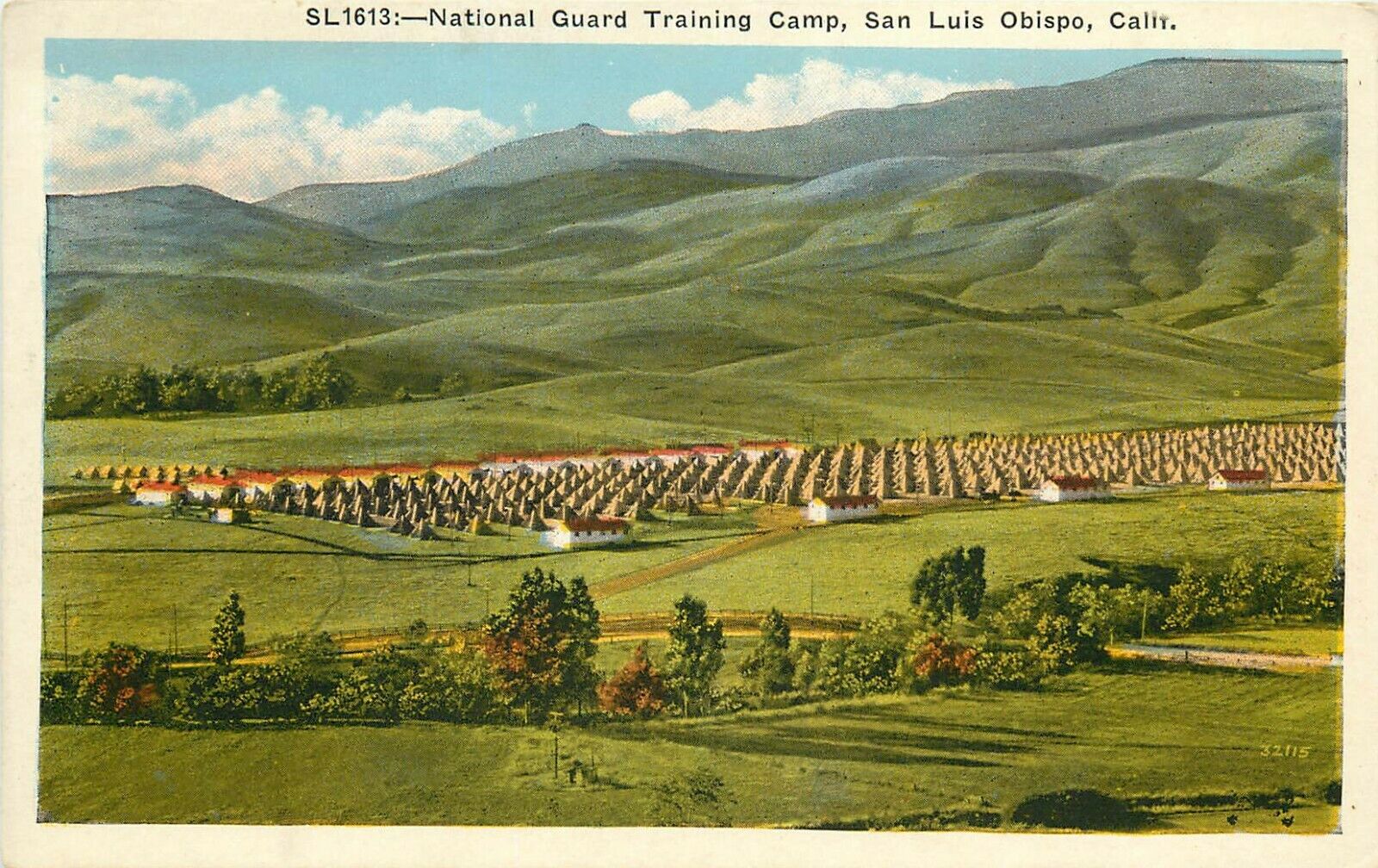 The original camp spanned across 5,800 acres just east and north of State Highway 1. The camp originally had 400 more acres, but this was transferred to the State Department of Corrections in 1952. The camp was divided into two areas including the artillery camp and a bigger infantry camp. Today only parts of the artillery camp remain.

In 1940, the US government leased Camp San Luis Obispo from the State. The compound would become home to the 40th Infantry Division, which included installations from California, Utah and Arizona. There were also several other infantry divisions that followed increasing the camp’s size to almost 5,000 acres. The cantonment area began construction in 1940 and was completed in 1941. The Army also added 4,170 acres at the Salinas River, which was 20 miles east of Camp San Luis Obispo. This became the Salinas Dam and a supplemental source of water for the camp. 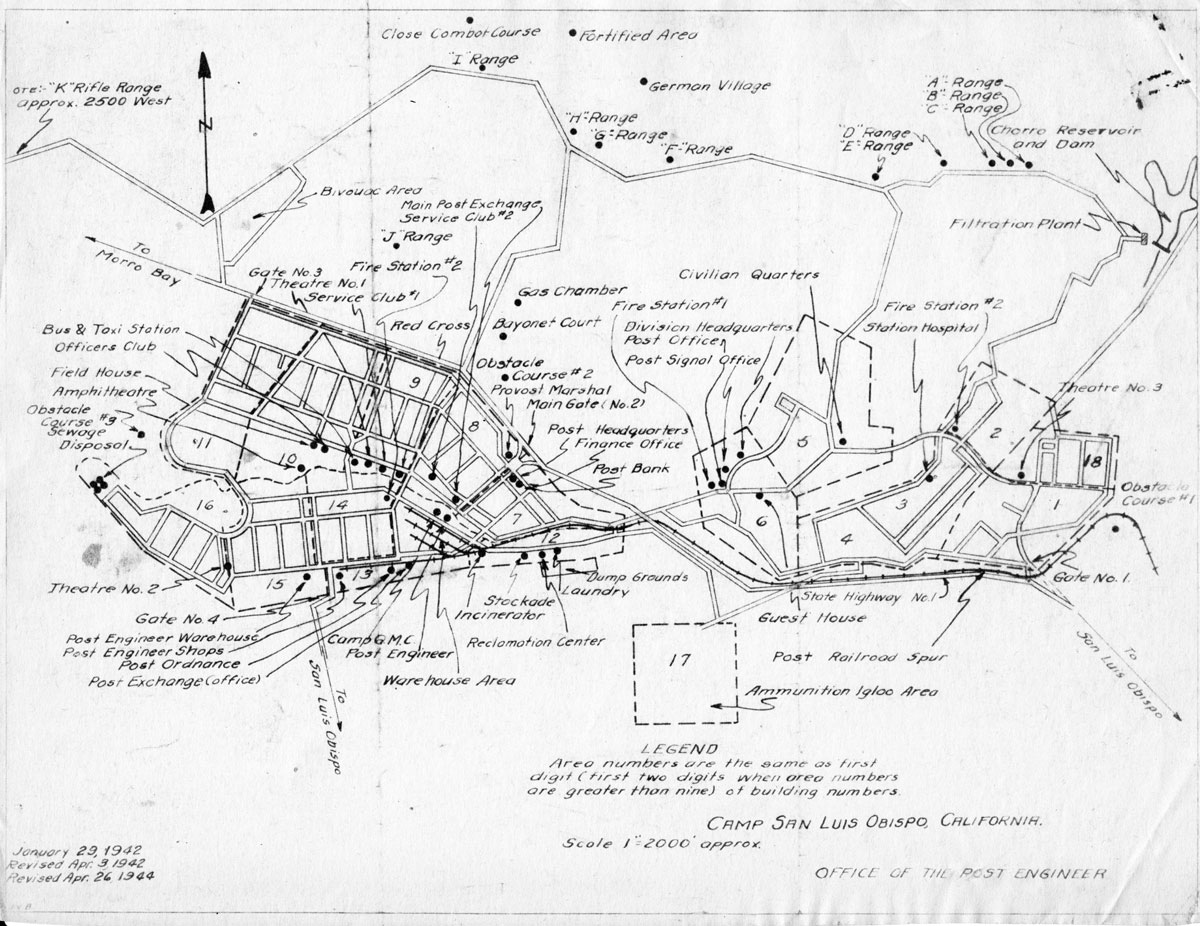 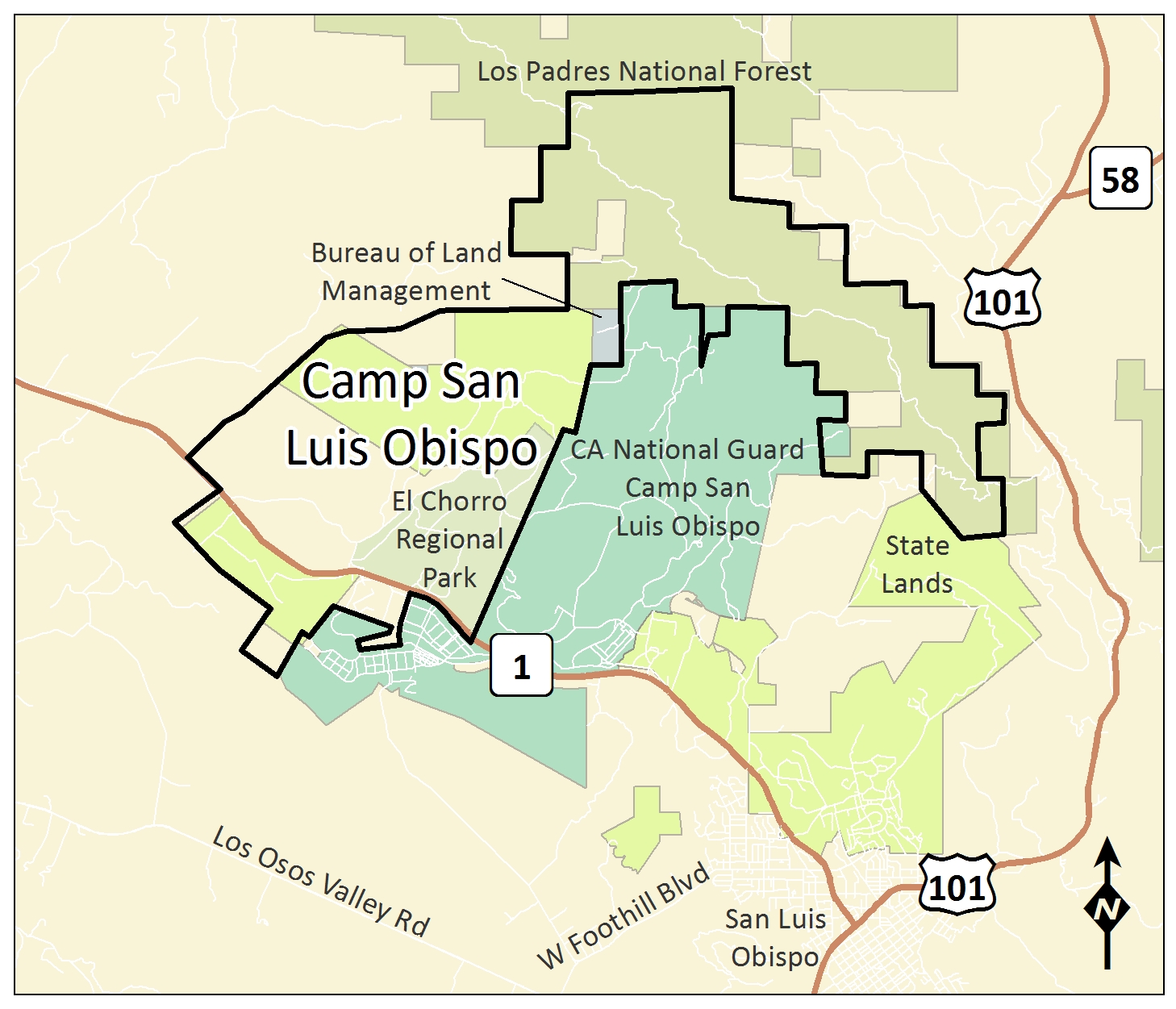 Several combat divisions trained at Camp San Luis Obispo who would head to the Pacific and Europe battlefronts once finished. Marine Corps also moved into Camp San Luis Obispo from Camp Matthews after the limited ranges and training facilities could no longer support the extra 5,000 Marines. They completed marksmanship and other training.

The Army resumed control after the outbreak of the Korean war in January 1950. The 40th Infantry Division and other support units with the California National Guard used the facilities as a Class I installation. By 1965, the camp had again returned to state control. The California Military Academy was established here after a need was recognized for better training facilities. Thus, the academic complex at Camp San Luis Obispo was constructed and created the 6th US Army sponsored unit training schools.

The largest military exercise ever conducted occurred at Camp San Luis Obispo in August 1984 when the US Army launched GALLANT EAGLE. Other exercises have also taken place here such as LASTING RESPONSE, which incorporated other countries and continues to be in operation at the camp for the past 10 years. 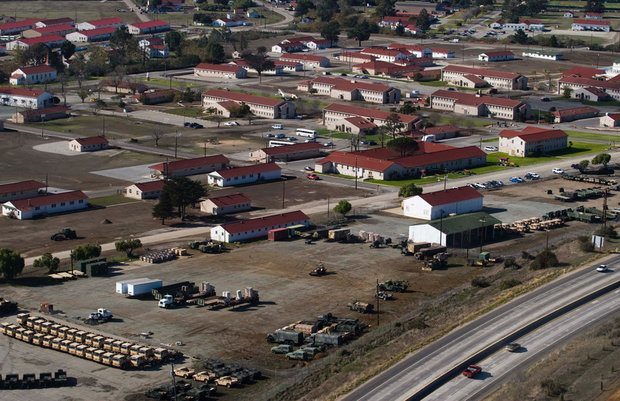 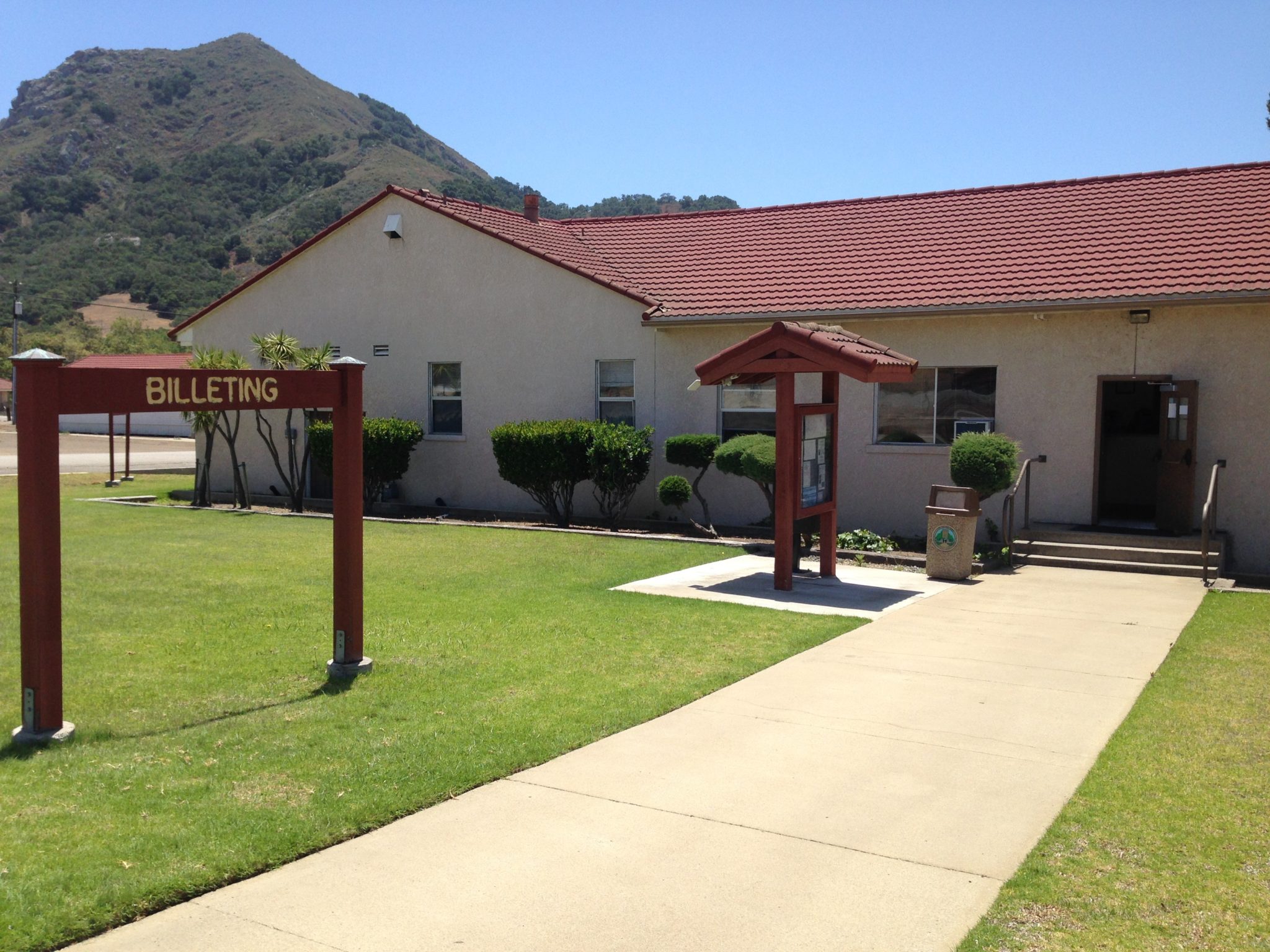 The cantonment area at Camp San Luis Obispo offers housing for more than 2,000 people within normal parameters, but this number can jump to 3,500 in times of emergency. There are 11 separate dining facilities currently available at the compound, which can feed 3,000 people.

Operational, training and logistical support are available here for several agencies including the California Army and Air National Guard, the US Coast Guard reserve, California Specialized Training Institute, the US Army Reserve, the California Conservation Corps, Cuesta Community College and the California Department of Transportation. 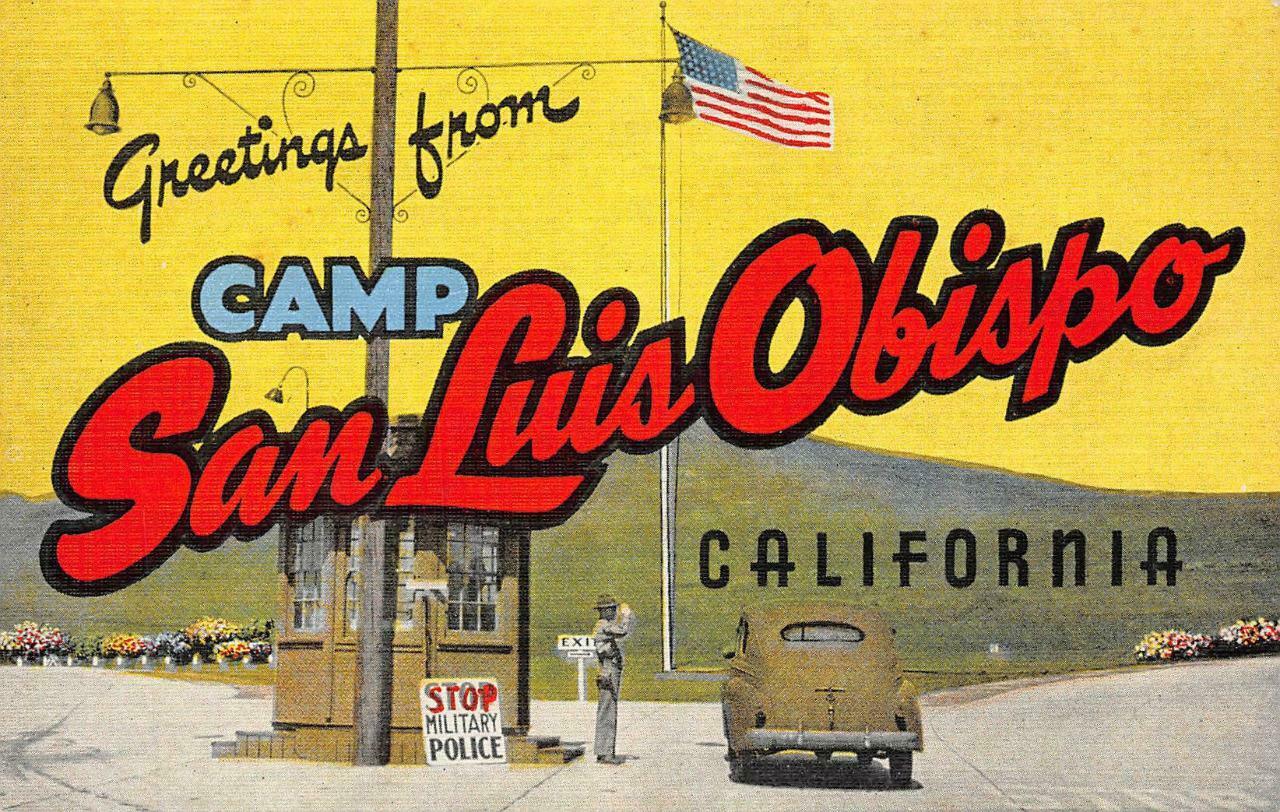 Units of the Guard, Army Reserve and Active Army all live at facilities on Camp San Luis Obispo for two to three week periods during training in summer months. Training facilities at the camp include obstacle courses, firing maneuvers, ranges, land navigation and leadership reaction courses. There are also field training exercises for battalion size operations that include 1,000 personnel.

The Baywood Park Training Area used to be located about 13 miles north of San Luis Obispo. The US Army created the area out of 8,810 acres of land during World War II to use as an off-post training and exercise facility for Camp San Luis Obispo. Most of the area was used for maneuvers for troops, equipment and military vehicles. The US Navy and Marine Corps both utilized portions of the site along Morro Bay and the ocean front. Baywood was declared an excess site after World War II and is now owned by private individuals.