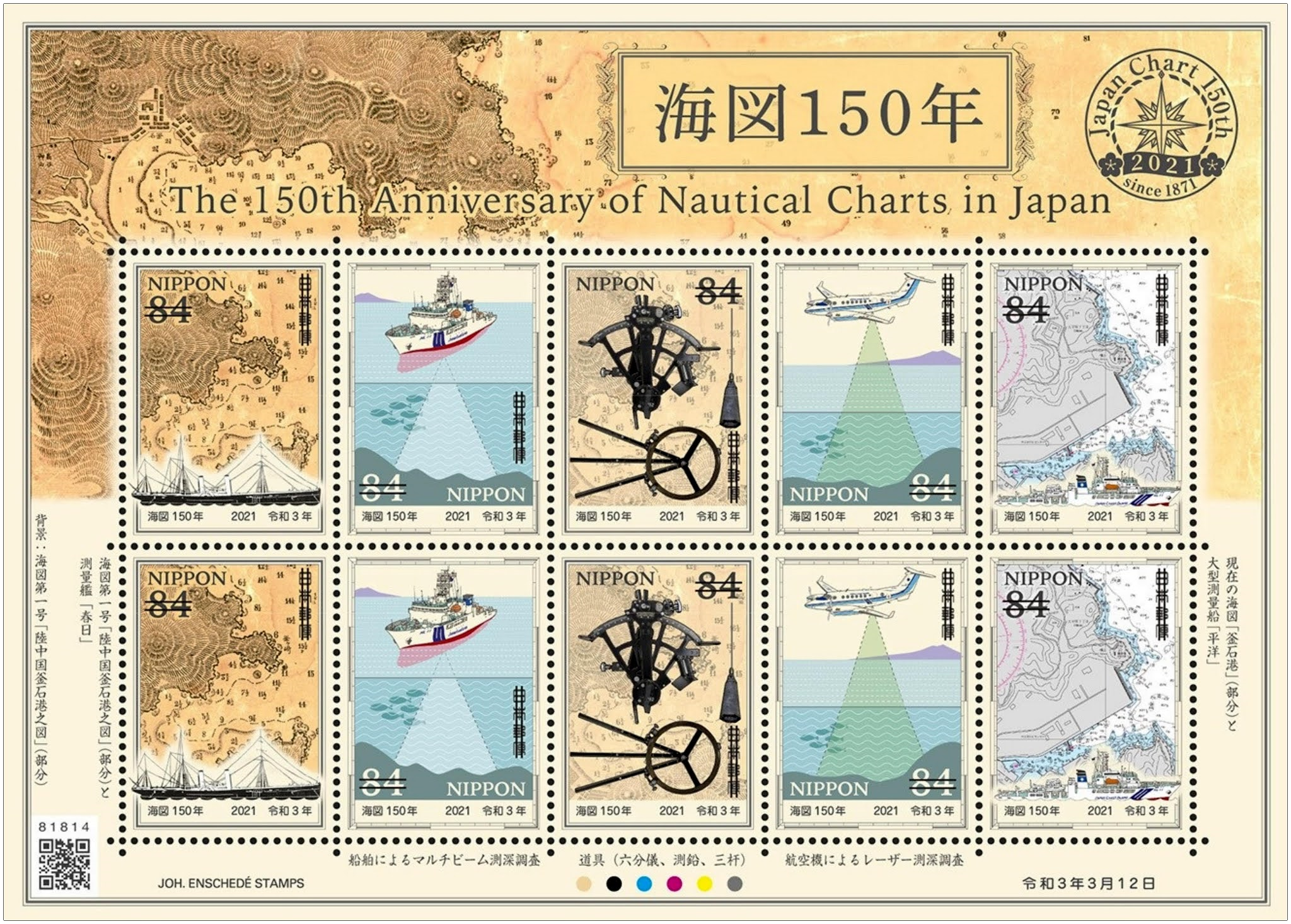 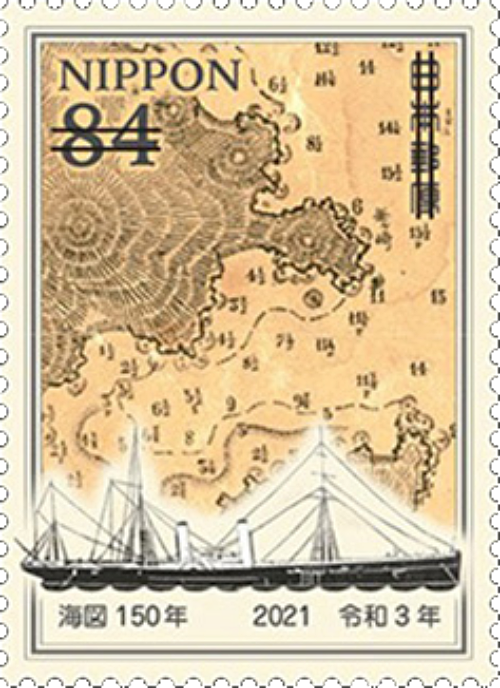 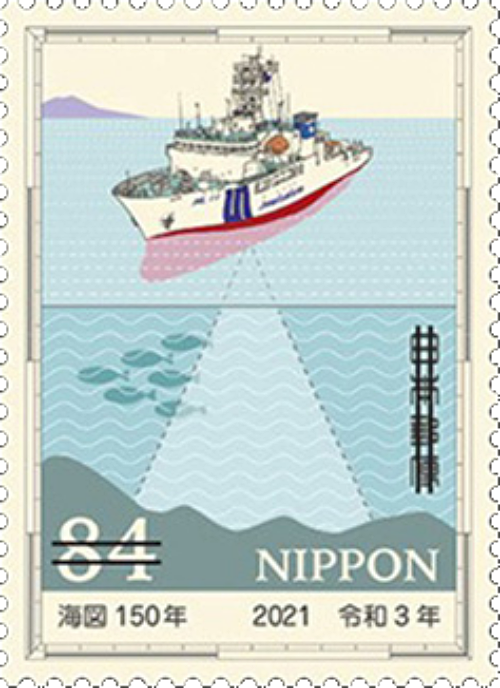 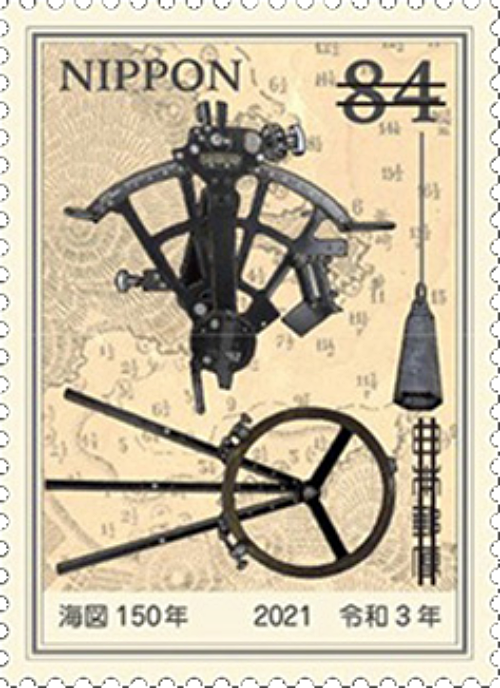 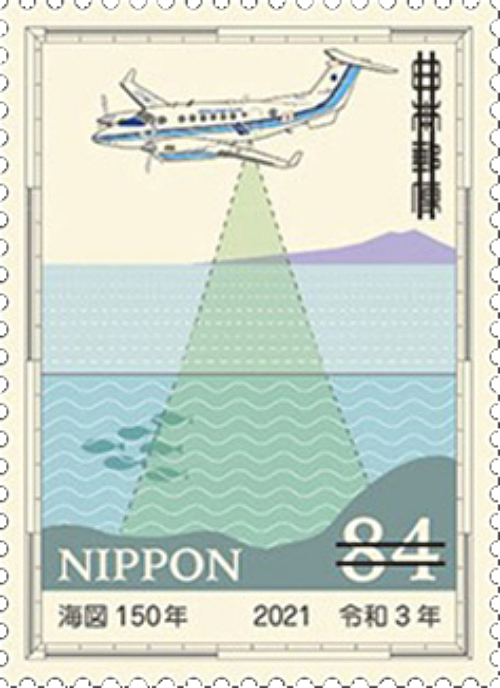 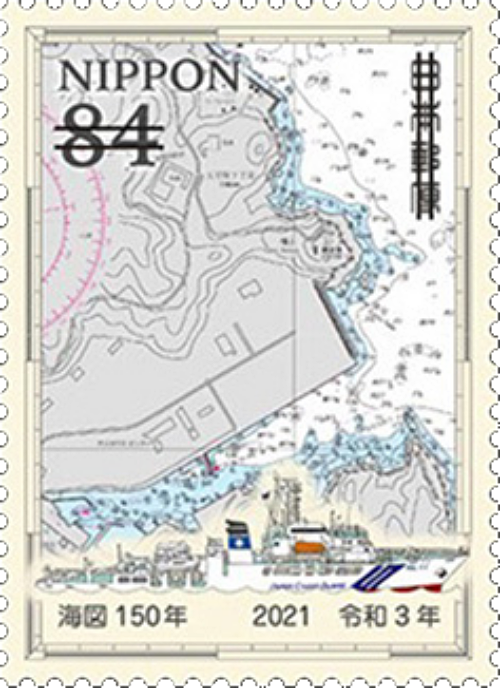 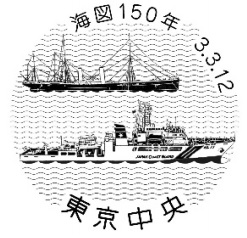 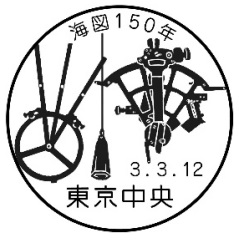 Japan Post Co., Ltd. (Chiyoda-ku, Tokyo, President Kazuhide Kinugawa) was founded in 1871 (Meiji 4) in Japan. Full-scale waterway operations, which carry out everything from marine surveys to nautical charts, have begun with modern technology alone. In commemoration of his 150th anniversary in 2021, a special stamp “Nautical Chart 150 Years” will be issued.

2 About the design of postage stamps to be issued
(1) Nautical Chart No. 1 “Rikuchu Kamaishi Port Map Rikuchu no Kamaishi Kamaishi (Part) and surveying ship “Kasuga”.
The first nautical chart created by Japan alone with modern technology was published in 1872 (Meiji 5). The surveying ship “Kasuga” was a ship engaged in this survey and was a coal-fueled steamship.
(2) Multi-beam echo sounding survey by ship
It is a state of sounding survey by a ship using sound waves. A sound wave beam is emitted from the bottom of the ship toward the bottom of the sea. The water depth is measured by the round trip time. You can get many water depths at once by emitting many beams. He was first introduced in Japan in 1983 (Showa 58).
(3) Tools (sextant)
Rokubungi, Measurement Soku Lead, Three rods Sung Kang: Tools used for surveying and drafting from the early Meiji period to the Showa period.
・ Sextant: Measures the angle between two points.
・ Lead measurement: Attach a rope and hang it in the sea to check the water depth and the geology of the seabed.
・ Sanjo: The position of the ship at sea is shown on the map using the angle measured by a sextant between her two landmarks on land.
Fill in. Using these tools, the water depth was measured one by one over time and effort, and the first nautical chart of Kamaishi Port was created.
(4) Laser sounding survey by aircraft
It is a state of sounding survey by an aircraft using laser light. Capturing the reflected light on the surface and bottom of the sea
The water depth is measured from the difference. You can quickly investigate shallow waters where ships are difficult to navigate. He was first introduced in Japan in 2003 (Heisei 15).
(5) Current nautical chart “Kamaishi Port” (part) and large survey ship “Heiyo”
This is the latest nautical chart of Kamaishi Port published in 2020. “Heiyo” is the latest large-scale survey vessel belonging to the Japan Coast Guard, the only nautical chart production organization in Japan.

A nautical chart is a graphic representation of a sea area and adjacent coastal regions. Depending on the scale of the chart, it may show depths of water and heights of land (topographic map), natural features of the seabed, details of the coastline, navigational hazards, locations of natural and human-made aids to navigation, information on tides and currents, local details of the Earth’s magnetic field, and human-made structures such as harbors, buildings, and bridges. Nautical charts are essential tools for marine navigation; many countries require vessels, especially commercial ships, to carry them. Nautical charting may take the form of charts printed on paper or computerized electronic navigational charts. Recent technologies have made available paper charts which are printed “on demand” with cartographic data that has been downloaded to the commercial printing company as recently as the night before printing. With each daily download, critical data such as Local Notices to Mariners are added to the on-demand chart files so that these charts are up to date at the time of printing.

Nautical charts are based on hydrographic surveys, the science of measurement and description of features which affect maritime navigation, marine construction, dredging, offshore oil exploration/offshore oil drilling and related activities. Strong emphasis is placed on soundings, shorelines, tides, currents, seabed and submerged obstructions that relate to the previously mentioned activities. The term hydrography is used synonymously to describe maritime cartography, which in the final stages of the hydrographic process uses the raw data collected through hydrographic survey into information usable by the end user.

Hydrography is collected under rules which vary depending on the acceptance authority. Traditionally conducted by ships with a sounding line or echo sounding, surveys are increasingly conducted with the aid of aircraft and sophisticated electronic sensor systems in shallow waters.

Hydrographic offices evolved from naval heritage and are usually found within national naval structures, for example Spain’s Instituto Hidrográfico de la Marina. Coordination of those organizations and product standardization is voluntarily joined with the goal of improving hydrography and safe navigation is conducted by the International Hydrographic Organization (IHO). The IHO publishes Standards and Specifications followed by its Member States as well as Memoranda of Understanding and Co-operative Agreements with hydrographic survey interests.

The product of such hydrography is most often seen on nautical charts published by the national agencies and required by the International Maritime Organization (IMO), the Safety of Life at Sea (SOLAS) and national regulations to be carried on vessels for safety purposes. Increasingly those charts are provided and used in electronic form under IHO standards.

As surveying is laborious and time-consuming, hydrographic data for many areas of sea may be dated and not always reliable.

The history of hydrographic surveying dates almost as far back as that of sailing. For many centuries, a hydrographic survey required the use of lead lines – ropes or lines with depth markings attached to lead weights to make one end sink to the bottom when lowered over the side of a ship or boat – and sounding poles, which were poles with depth markings which could be thrust over the side until they touched bottom. In either case, the depths measured had to be read manually and recorded, as did the position of each measurement with regard to mapped reference points as determined by three-point sextant fixes. The process was labor-intensive and time-consuming and, although each individual depth measurement could be accurate, even a thorough survey as a practical matter could include only a limited number of sounding measurements relative to the area being surveyed, inevitably leaving gaps in coverage between single soundings.

Single-beam echosounders and fathometers began to enter service in the 1930s which used sonar to measure the depth beneath a vessel. This greatly increased the speed of acquiring sounding data over that possible with lead lines and sounding poles by allowing information on depths beneath a vessel to be gathered in a series of lines spaced at a specified distance. However, it shared the weakness of earlier methods by lacking depth information for areas in between the strips of sea bottom the vessel sounded.

In 1904, wire-drag surveys were introduced into hydrography, and the United States Coast and Geodetic Survey′s Nicholas H. Heck played a prominent role in developing and perfecting the technique between 1906 and 1916. In the wire-drag method, a wire attached to two ships or boats and set at a certain depth by a system of weights and buoys was dragged between two points. If the wire encountered an obstruction, it would become taut and form a “V” shape. The location of the “V” revealed the position of submerged rocks, wrecks, and other obstructions, while the depth at which the wire was set showed the depth at which the obstruction was encountered. This method revolutionized hydrographic surveying, as it allowed a quicker, less laborious, and far more complete survey of an area than did the use of lead lines and sounding poles.

Prior to the advent of sidescan sonar, wire-drag surveying was the only method for searching large areas for obstructions and lost vessels and aircraft. Between 1906 and 1916, Heck expanded the capability of wire-drag systems from a relatively limited area to sweeps covering channels 2 to 3 nautical miles (3.7 to 5.6 km; 2.3 to 3.5 mi) in width. The wire-drag technique was a major contribution to hydrographic surveying during much of the rest of the 20th century. So valuable was wire-drag surveying in the United States that for decades the U.S. Coast and Geodetic Survey, and later the National Oceanic and Atmospheric Administration, fielded a pair of sister ships of identical design specifically to work together on such surveys. USC&GS Marindin and USC&GS Ogden conducted wire-drag surveys together from 1919 to 1942, USC&GS Hilgard (ASV 82) and USC&GS Wainwright (ASV 83) took over from 1942 to 1967, and USC&GS Rude (ASV 90) (later NOAAS Rude (S 590)) and USC&GS Heck (ASV 91) (later NOAAS Heck (S 591)) worked together on wire-drag operations from 1967.

The rise of new electronic technologies – sidescan sonar and multibeam swath systems – in the 1950s, 1960s and 1970s eventually made the wire-drag system obsolete. Sidescan sonar could create images of underwater obstructions with the same fidelity as aerial photography, while multibeam systems could generate depth data for 100 percent of the bottom in a surveyed area. These technologies allowed a single vessel to do what wire-drag surveying required two vessels to do, and wire-drag surveys finally came to an end in the early 1990s. Vessels were freed from working together on wire-drag surveys, and in the U.S. National Oceanic and Atmospheric Administration (NOAA), for example, Rude and Heck operated independently in their later years.

In modern surveying, in suitable shallow-water areas lidar (light detection and ranging) may be used. Equipment can be installed on inflatable craft, such as Zodiacs, small craft, autonomous underwater vehicles (AUVs), unmanned underwater vehicles (UUVs), Remote Operated Vehicles (ROV) or large ships, and can include sidescan, single-beam and multibeam equipment. At one time different data collection methods and standards were used in collecting hydrographic data for maritime safety and for scientific or engineering bathymetric charts, but increasingly, with the aid of improved collection techniques and computer processing, the data is collected under one standard and extracted for specific use.

After data is collected, it has to undergo post-processing. A massive amount of data is collected during the typical hydrographic survey, often several soundings per square foot. Depending on the final use intended for the data (for example, navigation charts, Digital Terrain Model, volume calculation for dredging, topography, or bathymetry) this data must be thinned out. It must also be corrected for errors (i.e., bad soundings,) and for the effects of tides, waves/heave, water level and thermoclines (water temperature differences). Usually the surveyor has additional data collection equipment on site to record the data required for correcting the soundings. The final output of charts can be created with a combination of specialty charting software or a computer-aided design (CAD) package, usually Autocad.

There are also commercially published charts, some of which may carry additional information of particular interest, e.g. for yacht skippers.