2020 was indeed an odd year and one of the oddities that I noted was a huge decrease in international armed conflict. The Coronavirus was waging its own war and citizens of a number of nations fought amongst themselves with levels of rioting not seen in decades, if ever. During the late spring and early summer my birth-country led the way in home-grown mayhem with my adopted country copying the stupidity as it does so well later in the year. Cross-border fighting seemed to cease or at least the reporting of it as the focus turned to medical and racial affairs.

In July, feelings and actions began escalating in a small corner of Eurasia from where emanate a number of stamps that I have long found interesting. By the end of September, this erupted into armed conflict between Azerbaijan, supported by Turkey, and the self-proclaimed Republic of Artsakh together with Armenia, in the disputed region of Nagorno-Karabakh and surrounding territories. It was the latest escalation of an unresolved conflict over the region, which is internationally recognized as part of Azerbaijan, but partially governed by Artsakh, a breakaway state with an Armenian ethnic majority.

This ethnic and territorial conflict had been brewing for years with flare-ups between Armenia and Azerbaijan over the the disputed region of Nagorno-Karabakh, inhabited mostly by ethnic Armenians, and seven surrounding districts, inhabited mostly by Azerbaijanis until their expulsion during the First Nagorno-Karabakh War which lasted from 1988 until May 1994. The seven districts are de facto controlled by the self-declared Republic of Artsakh, but are internationally recognized as de jure part of Azerbaijan.

A ceasefire signed in 1994 provided for two decades of relative stability, which significantly deteriorated along with Azerbaijan’s increasing frustration with the status quo, at odds with Armenia’s efforts to cement it. A four-day escalation in April 2016 became the deadliest ceasefire violation until the 2020 conflict. Clashes near Tavush took place in July 2020 with thirteen Azeris, including one civilian, and five Armenians killed. In a minor border skirmish on 16 September, one Armenian soldier was killed; five days later, an Azerbaijani soldier was killed. 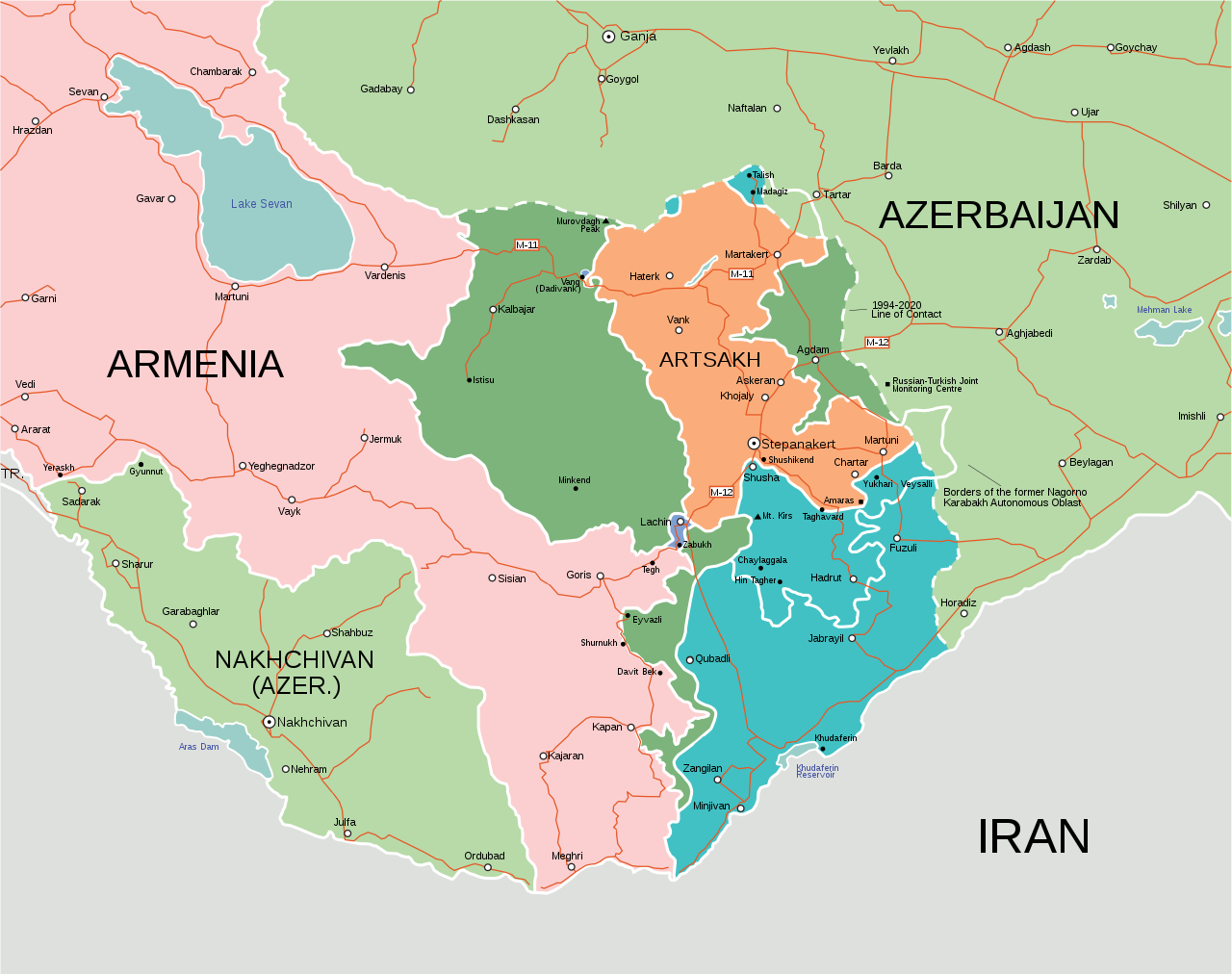 On 27 September, serious clashes in Nagorno-Karabakh re-erupted, leading to Armenia declaring martial law and mobilization. On the same day, Azerbaijan’s Parliament declared a martial law and established curfews in several cities and regions following the clashes. In terms of casualties, the clashes were the worst since the 1994 ceasefire and caused alarm in the international community.

Forty-four days of fighting ended on 10 November 2020, with a peace deal brokered by Russia. Armenian forces agreed to return to Azerbaijan all occupied territory outside of the former Soviet Nagorno-Karabakh Autonomous Oblast, with Russian peacekeepers guaranteeing safe passage through the region of Lachin which separates Nagorno-Karabakh from Armenia.

An estimated 28,000–38,000 people were killed during the first Nagorno-Karabakh War between 1988 and 1994. Between January and September 2020, 16 Azerbaijani and 8 Armenian soldiers, as well as an Azerbaijani civilian, were killed in sporadic clashes. Between 27 September and 10 November, according to Azerbaijani sources, the fighting left 2,854 Azerbaijani soldiers and 100 civilians dead, while 50 Azerbaijani soldiers also went missing. Armenian authorities stated the fighting had left 3,439 Armenian soldiers and 65 civilians dead. Additionally, the Syrian Observatory for Human Rights documented the deaths of 541 Syrian mercenaries fighting for Azerbaijan. Two Russian soldiers were also killed when their helicopter was shot down by Azerbaijan by accident while flying in Armenian airspace near the border. In addition, a 13-year-old Russian citizen was killed during an Armenian missile strike on the city of Ganja. Following the end of the war, eleven more Azerbaijani soldiers, six Azerbaijani civilians and one Russian peacekeeper were killed in clashes and landmine explosions in the region by the end of the year. 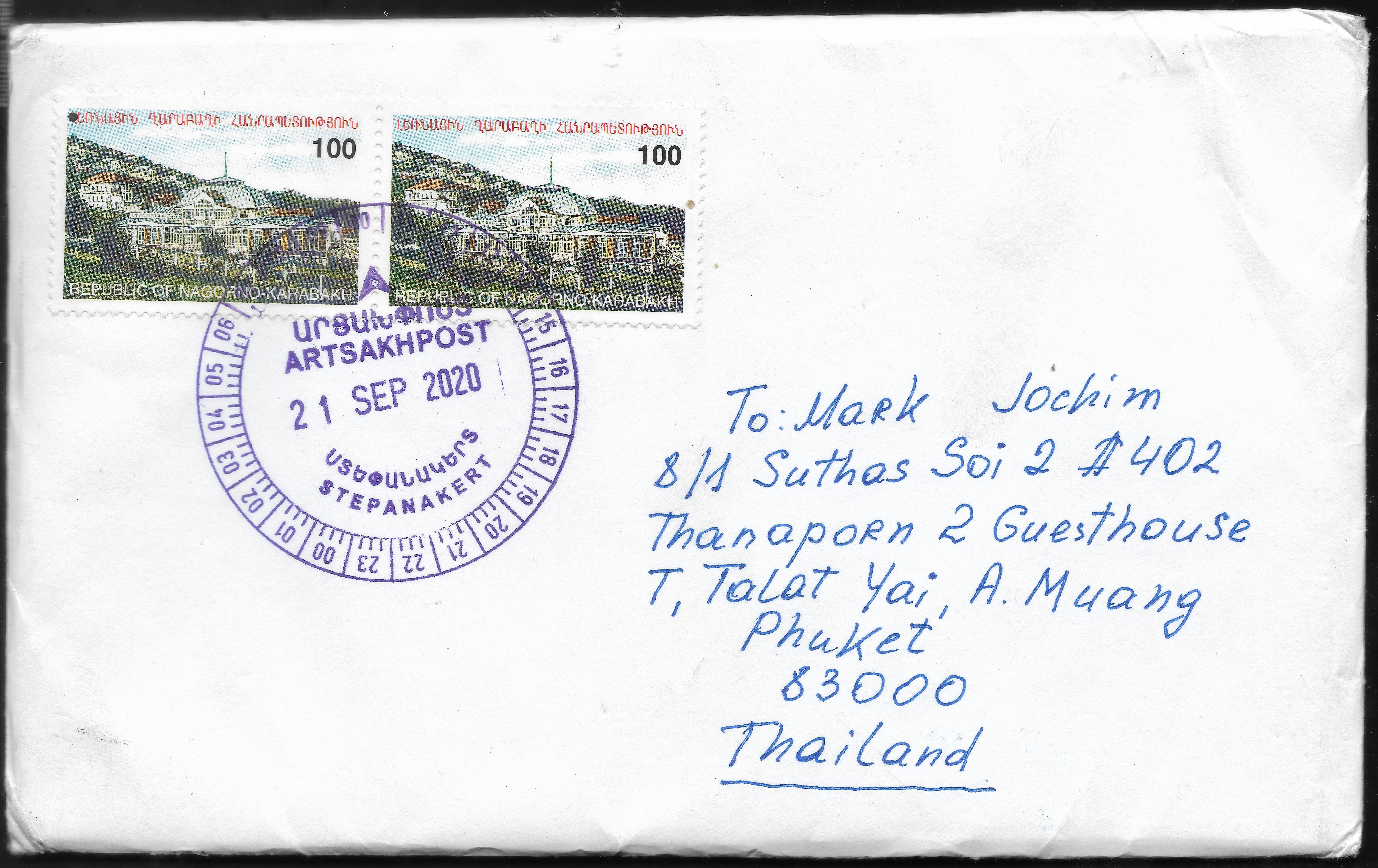 Today’s cover narrowly missed the start of the major conflict, mailed from  Stepanakert (Armenian: Ստեփանակերտ, also known as Khankendi (Azerbaijani: Xankəndi), on 21 September. This is the de facto capital and the largest city of the self-proclaimed Republic of Artsakh, though the city is internationally recognized as part of Azerbaijan. Stepanakert is located on Karabakh plateau, at an average altitude of 813 m (2,667 ft) above sea level. As of 2015, the population was 55,200.

The city came under intense bombardment once again during the 2020 Nagorno-Karabakh war. Residential areas were hit by the Azerbaijani Army with cluster munitions during the first days of fighting, as residents were urged to use the city’s bomb shelters. As Azerbaijani forces advanced on the city of Shusha, the Lachin corridor was shut down by Artsakh authorities. The ceasefire agreement was signed on 10 November as Azerbaijani forces were within 15 kilometers of the capital, effectively deploying Russian peacekeepers to the region. 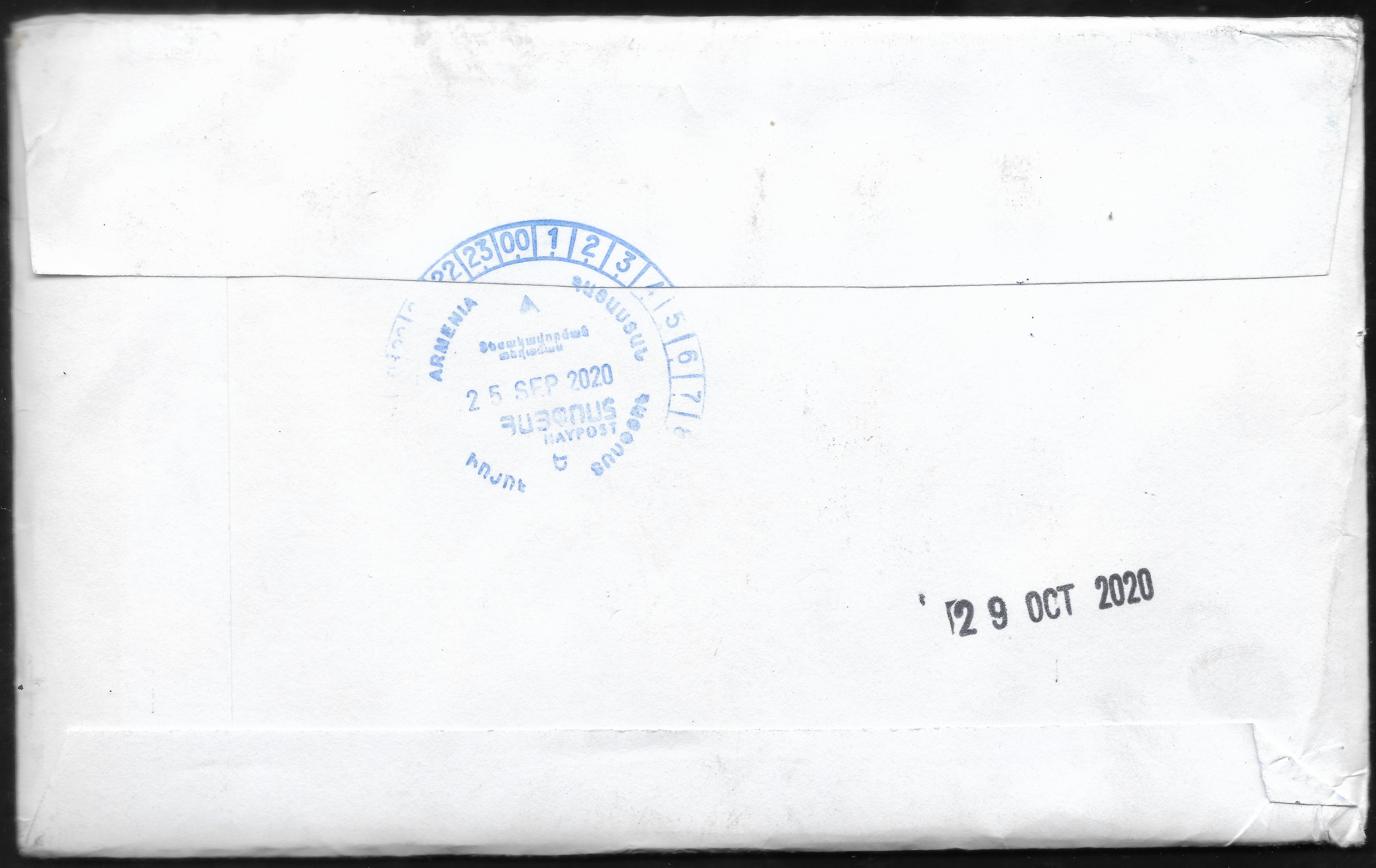 The back of the cover has an transit marking applied on 25 September in Yerevan (Armenian: Երևան), the capital and largest city of Armenia and one of the world’s oldest continuously inhabited cities. Situated along the Hrazdan River, Yerevan is the administrative, cultural, and industrial center of the country. It has been the capital since 1918, the fourteenth in the history of Armenia and the seventh located in or around the Ararat plain. The city also serves as the seat of the Araratian Pontifical Diocese; the largest diocese of the Armenian Apostolic Church and one of the oldest dioceses in the world.

The cover arrived at my home in Phuket, Thailand, on 29 October 2020. It contained a selection of recently-issued Artsakhi stamps. Having released stamps under the latter name since 1993, the entity has been recognized only by three other self-proclaimed and unrecognized states, Transnistria, Abkhazia, and South Ossetia. Although Armenia supports Nagorno-Karabakh economically and militarily, they have not recognized the region’s independence. Despite the stamps not being recognized by the Universal Postal Union, they are listed in most stamp catalogues (Gibbons, Yvert & Tellier, Michel) and many philatelists collectors collect the stamps even if they aren’t official stamp issues. 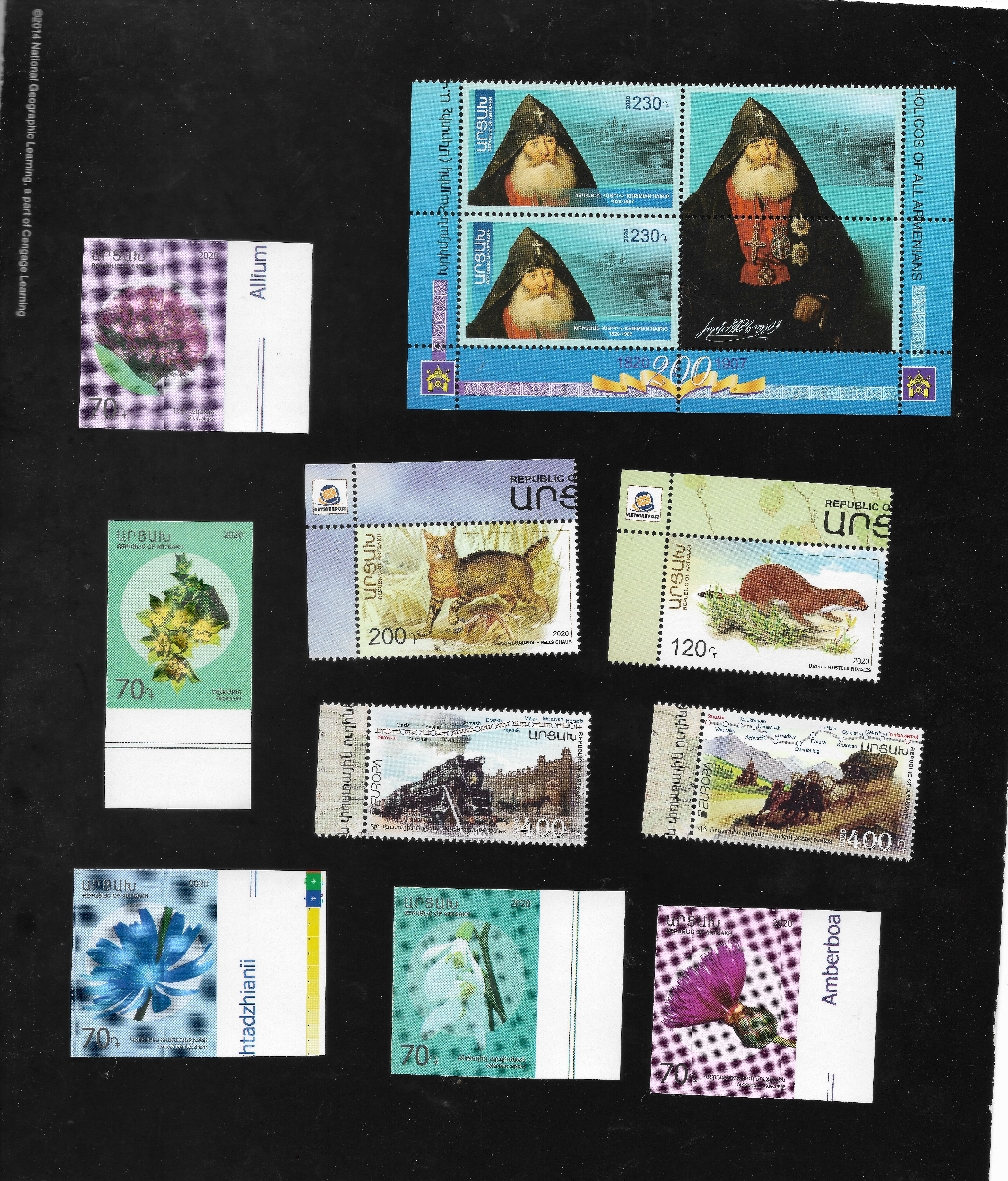