I love it when I can find a connection between my varied interests with philately providing the bridge. Today’s cover is one such combination, although the reasons why aren’t readily apparent. 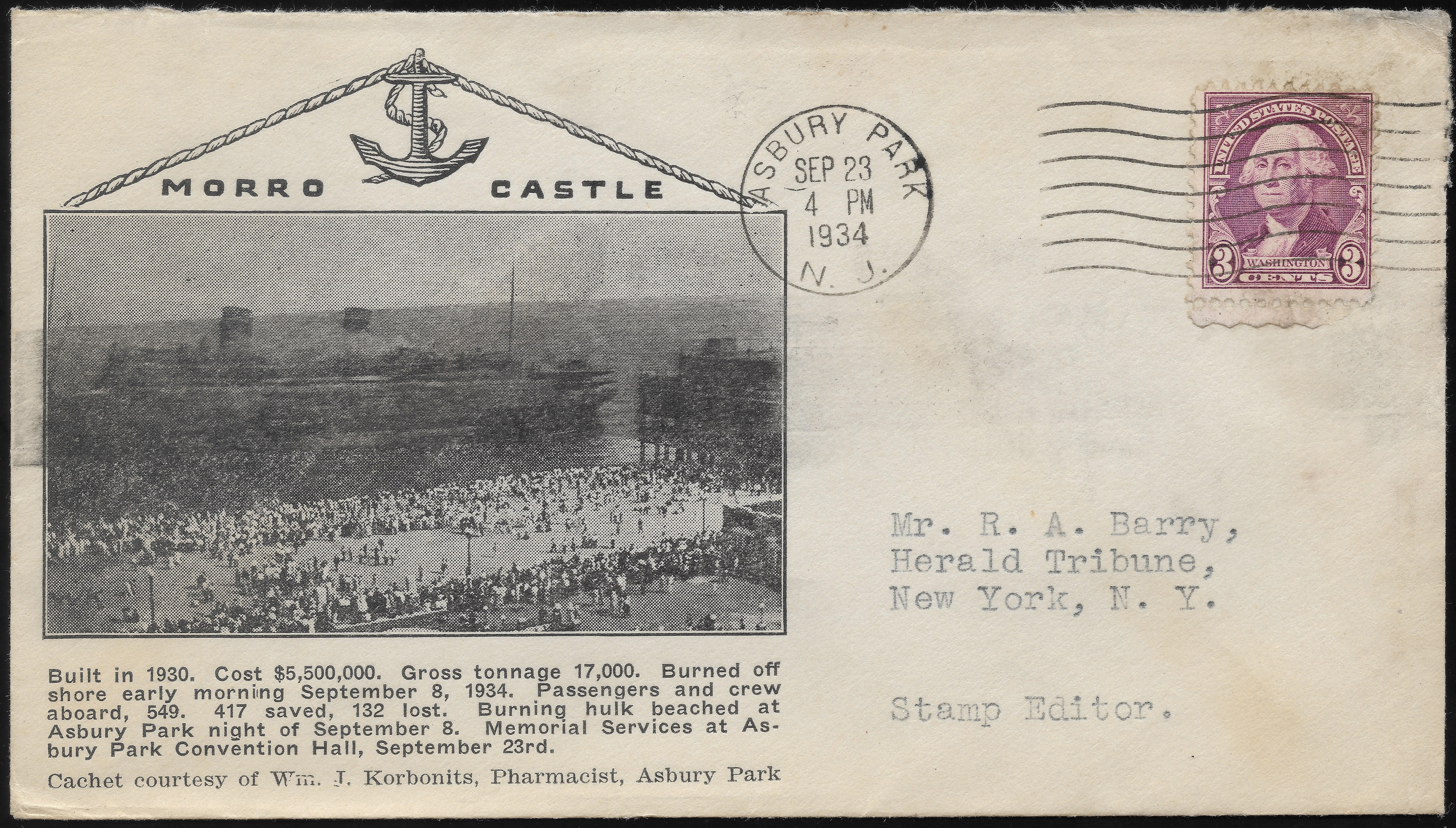 The cover was postmarked at Asbury Park, New Jersey, on 23 September 1934, to mark memorial services for those who perished in the fire which consumed the Ward Line’s S.S. Morro Castle during the early morning hours of 8 September. Concurrent with my initial interests in collecting stamps, I was also starting what would become a life-long fascination with ships and the sea (in particular, passenger liners and cruise ships). My earliest readings on the topic concerned the tragedies that befell the Titanic, the Andrea Doria and the Morro Castle, amongst others.

The Morro Castle, named after a fortress that guards Havana Bay, was built for the Ward Line for runs between New York City and Havana. At around 2:50 on the morning of 8 September 1934, en route from Havana to New York, a fire was detected in a storage locker within the First Class Writing Room on B Deck. Within the next 30 minutes, the Morro Castle became engulfed in flames. As the fire grew in intensity, acting Captain Warms attempted to beach the ship, but the growing need to launch lifeboats and abandon ship forced him to give up this strategy. Within 20 minutes of the fire’s discovery (at about 3:10), the fire burned through the ship’s main electrical cables, plunging the ship into darkness.

Despite attempts to tow her to a safer location, the ship continued to drift toward shore. As telephone calls and radio stations spread news of the disaster along the New Jersey coast, local citizens assembled on the coastline to nurse the wounded, retrieve the dead, and try to unite families that had been scattered among different rescue boats that landed on the New Jersey beaches. By mid-morning, the ship was totally abandoned and its burning hull drifted ashore, coming to a stop in shallow water off Asbury Park, New Jersey, late that afternoon. The fires continued to smolder for the next two days, and in the end, 135 passengers and crew (out of a total of 549) were lost. 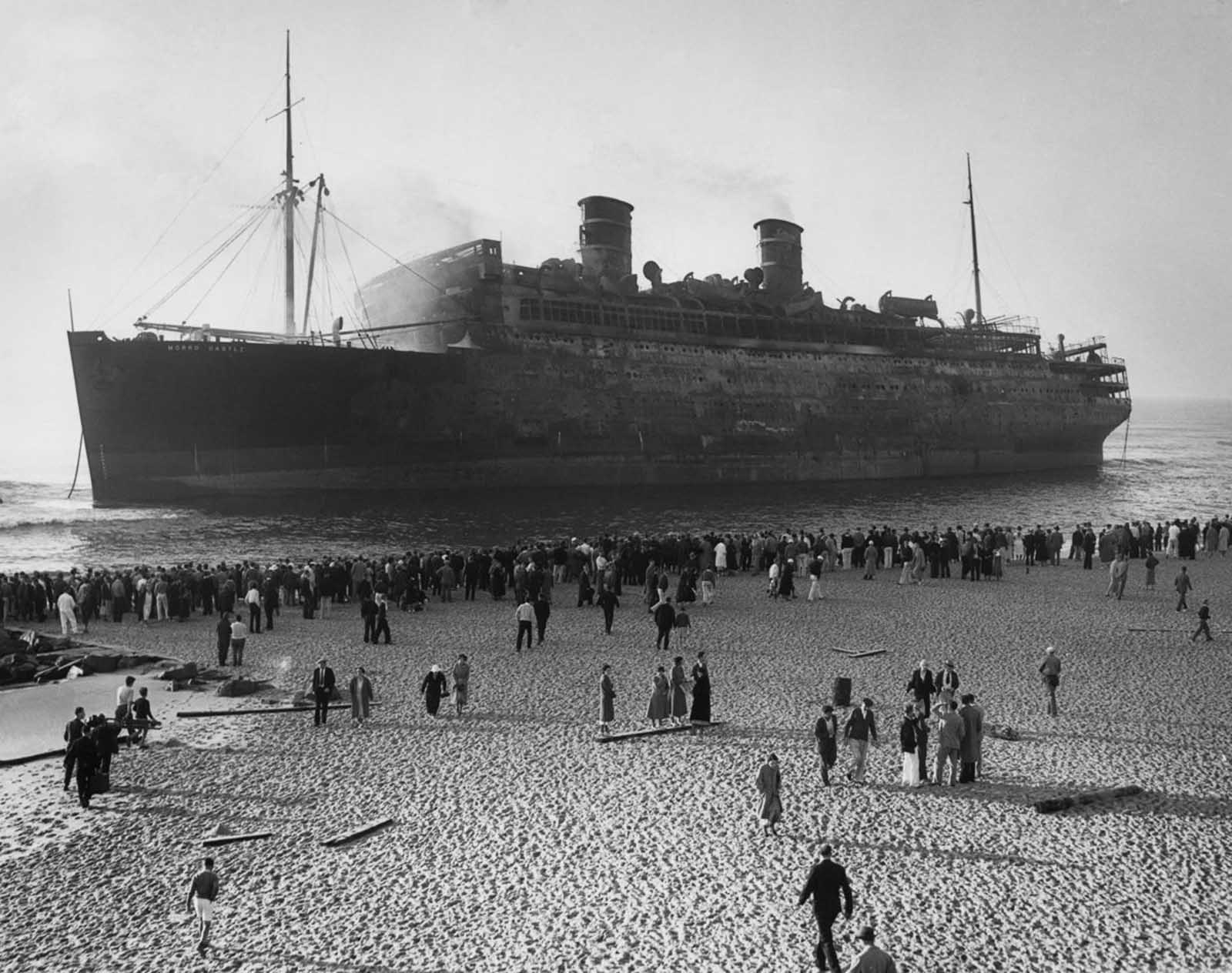 The ship was declared a total loss, and its charred hulk was finally towed away from the Asbury Park shoreline on March 14, 1935. According to one account, it later started settling by the stern and sank while being towed up the coast.

Irrespective of its cause, the fire aboard the Morro Castle served to improve fire safety for future ships. The use of fire-retardant materials, automatic fire doors, ship-wide fire alarms, the necessity of emergency generators, mandatory crew training in fire fighting procedures, and greater attention to fire drills and procedures resulted directly from the Morro Castle disaster. Due to the great loss of life the disaster caused, many reforms in the licensing of merchant marine officers occurred, such as the establishment of the United States Merchant Marine Academy.

Around the same time that I began my stamp collection and interest in maritime history, I was also developing an ear for rock & roll music. We lived in Nashville, Tennessee, in the early 1970s so the radio waves were dominated by country & western but my parents were firmly in the rock camp with mom having an interest in Elvis Presley (I remember her crying upon his death a few years later) and my dad still owned a Beatles sweatshirt from their final shows in San Francisco’s Candlestick Park less than a year after I was born. My first concerts in Nashville were John Denver and Shaun Cassidy but I was soon a big fan of Fleetwood Mac. Bruce Springsteen & the E Street Band played at the Grand Ole Opry House in 1976 but I was not able to attend.

By the time of his Darkness On the Edge of Town tour, I was a die-hard Springsteen fan (and I still am) but our 1977 move to Kansas prevented me from seeing more than a handful of shows. Radio broadcasts and bootlegs became a part of my life. If you know anything about Bruce, you know he’s a Jersey boy with a 23 September birthday (born in Freehold some 15 years after the date postmarked on this cover). In fact, his first album was titled Greetings From Asbury Park, N.J. paying homage to the community which forged his musical development. 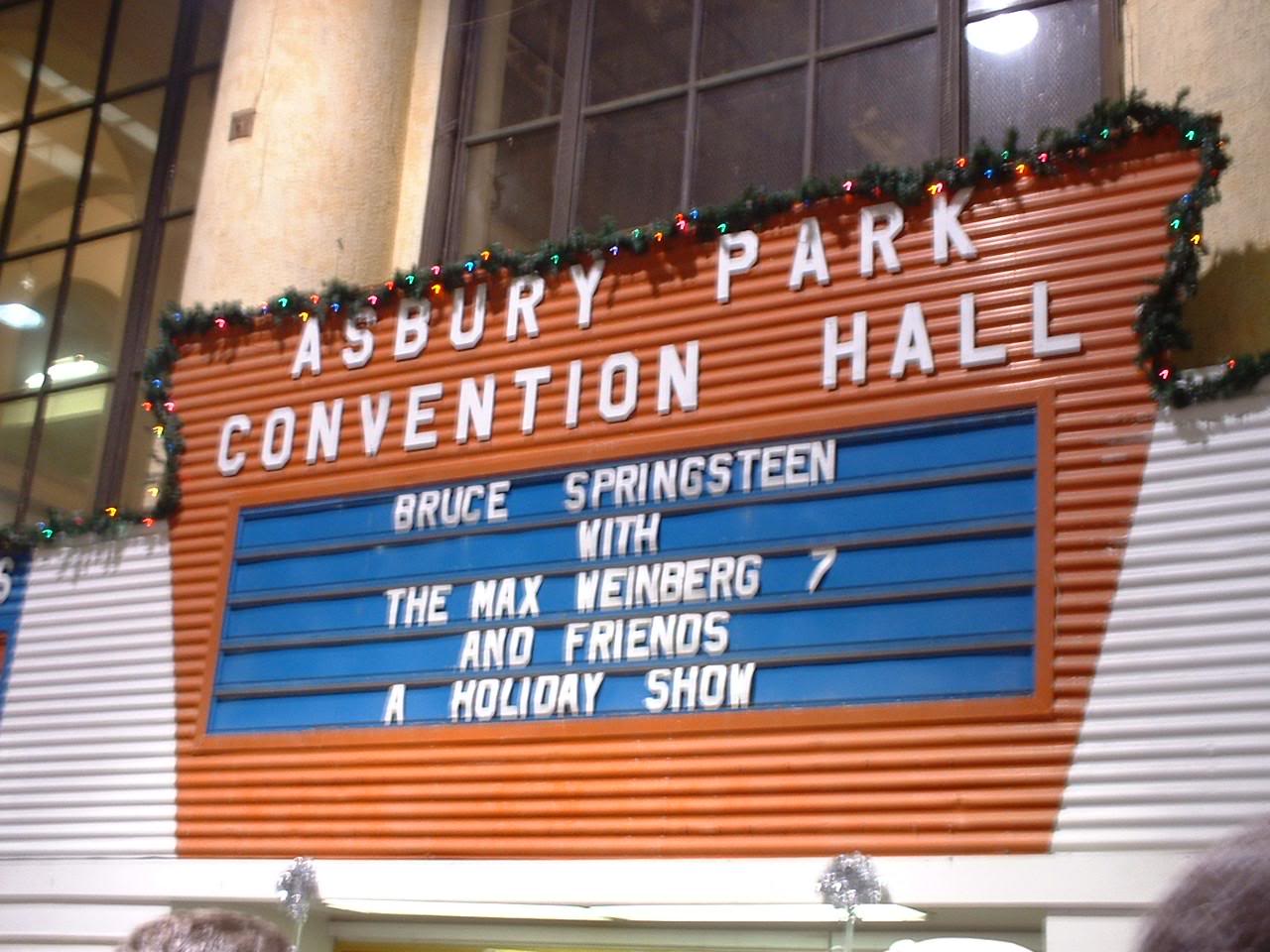 To date, my last live Springsteen show was in the very same Asbury Park Convention Hall which served as the site where the burned-out Morro Castle drifted up against back in 1934. This is a 3,600-seat indoor exhibition center located on the boardwalk and on the beach in Asbury Park, built between 1928 and 1930 and is used for sports, concerts and other special events. Adjacent to the Convention Hall is the Paramount Theatre; both are connected by a Grand Arcade. Both structures are listed in the National Register of Historic Places.

On the morning the Morro Castle caught fire, the Coast Guard cutter Tampa attempted to tow the damaged liner from eight miles (13 km) off the coast of Sea Girt to New York. However, rough seas from a nor’easter snapped the tow lines, and the Morro Castle drifted toward shore. WCAP radio announcer Tom Burley was broadcasting from the station’s Convention Hall studios on the second floor promenade at about 7:30 p.m. when he first spotted the burning hulk of the ship approaching the beach. As the wire services already knew about the disaster, Burley led off his newscast with a straight update about the Morro Castle. A few minutes later, he saw the burning hulk of the ship slowly drifting toward Convention Hall and exclaimed on air, “She’s here! The Morro Castle is coming right toward our studio!” 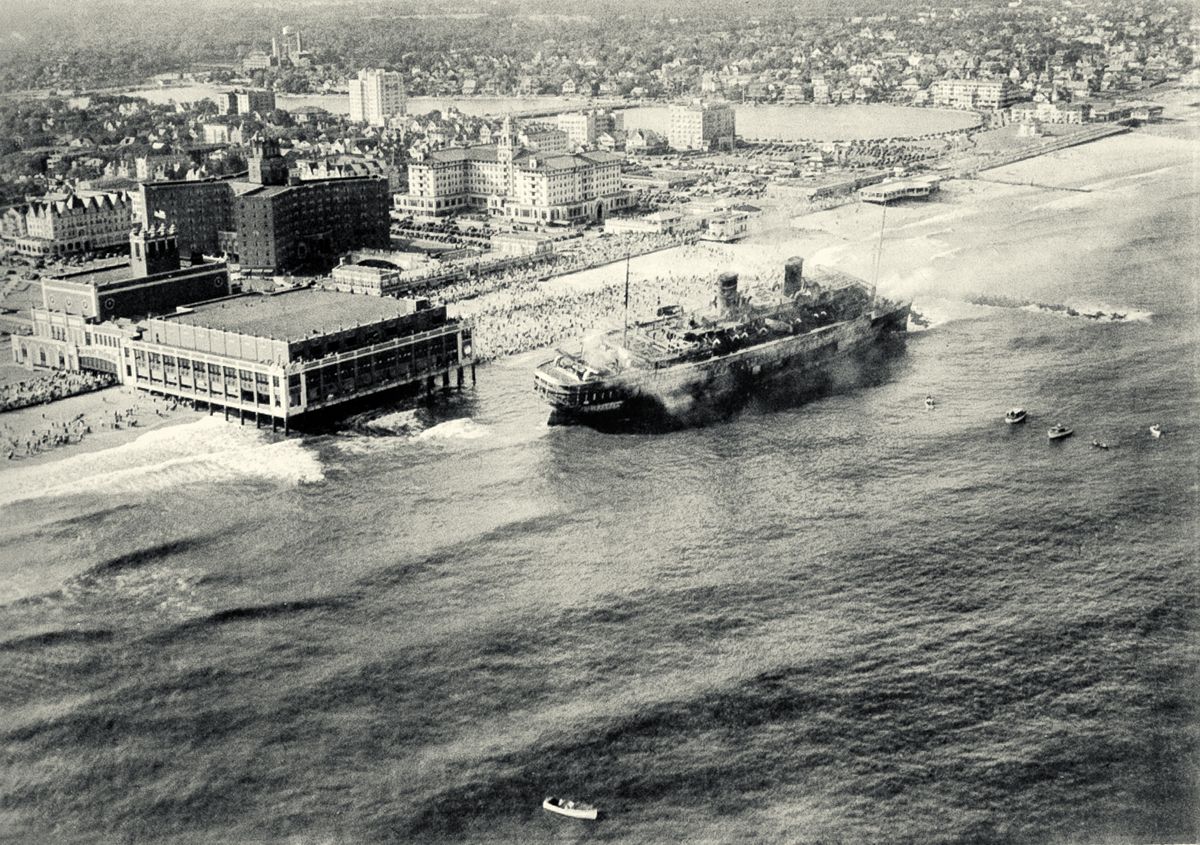 The ship eventually came to rest on a sandbar several yards in front of Convention Hall, with her stern perpendicular to the hall’s oceanfront promenade. The following morning, with the hull still smoldering, city engineer James Kontajones and Coast Guard inspector R.W. Hodge paddled out to the stern from a lifeguard boat and climbed up to the deck via one of the ropes hanging down from the ship’s D Deck railing. The Coast Guard then used a Lyle gun to fire several ropes to the Morro Castle‘s stern from Convention Hall. Kontajones and Hodge used the ropes to rig together a breeches buoy, facilitating passage for firemen, inspectors, local officials, and other authorities who needed to board the ship to search it for victims or anything of value. No living people were found on the ship and most of the decks and cabins were gutted by the massive fire. Most of the victims either burned to death or died from smoke inhalation. Some victims’ remains were found on the open decks and in the cabins below.

The Morro Castle remained on the sandbar throughout the fall and winter, spurring an economic boomlet for Asbury Park, which had been suffering from the effects of the Great Depression. Thousands of curious spectators and reporters lined both the boardwalk and Convention Hall’s promenade to see the ship’s charred remains, and both city officials and unlicensed individuals charged upwards of $5 to ride the breeches buoy onto the deck. It was possible to wade out and touch the wreck with one’s hands. The sightseeing atmosphere was completed with stamped penny souvenirs and postcards for sale. 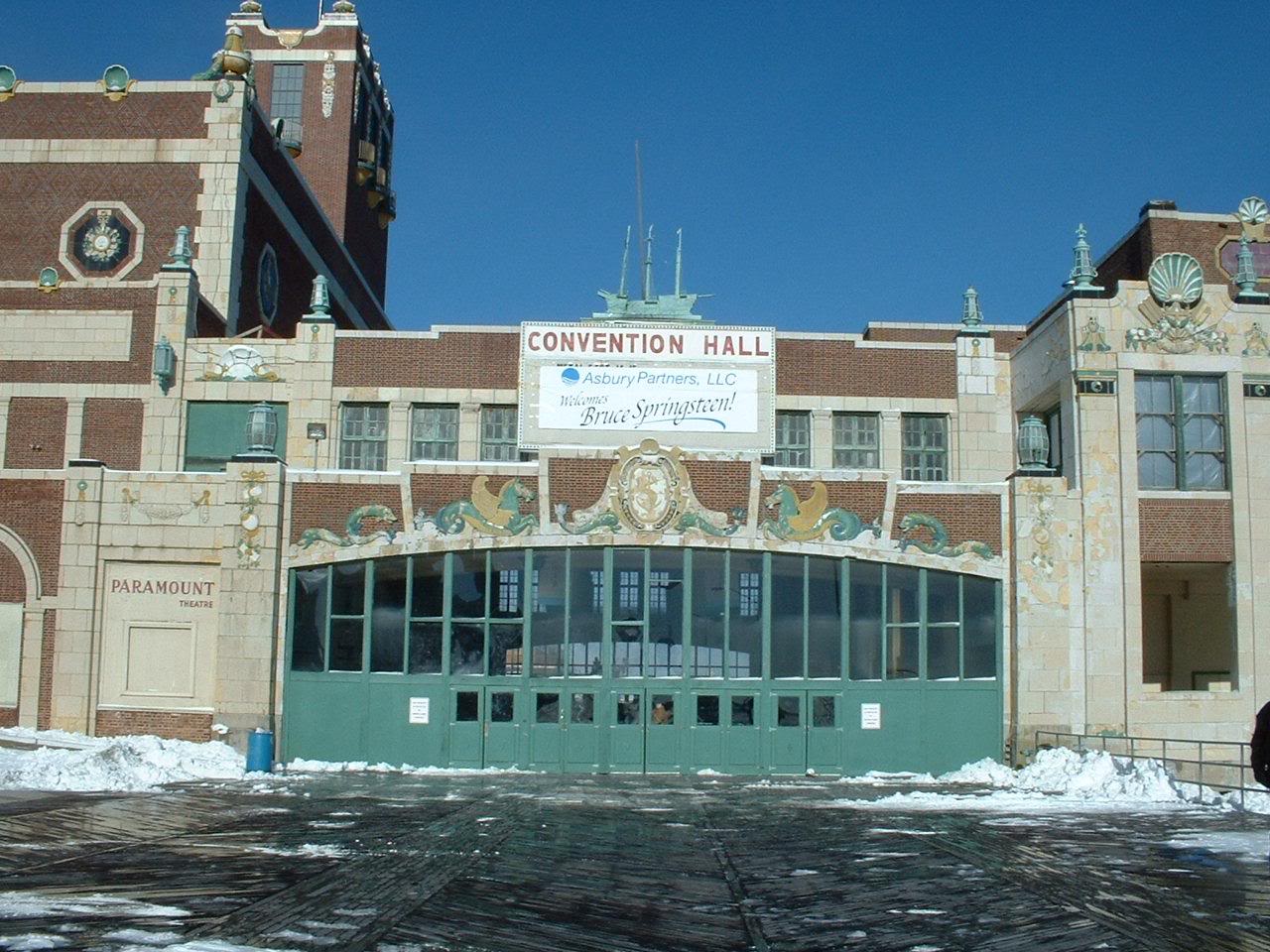 My own trip to Asbury Park was to attend one of Springsteen’s special Christmas shows which he held for several years to benefit local businesses. A blizzard hit the region a few days before so snow blanketed the town and it was bitterly cold when I attended with my cousin Doug (a New Jersey State Police officer, Doug passed away just two years later). We were up front and center stage to see Springsteen joined by a variety of famous and local musicians including Sam Moore, Jon Bon Jovi and Southside Johnny Lyon. 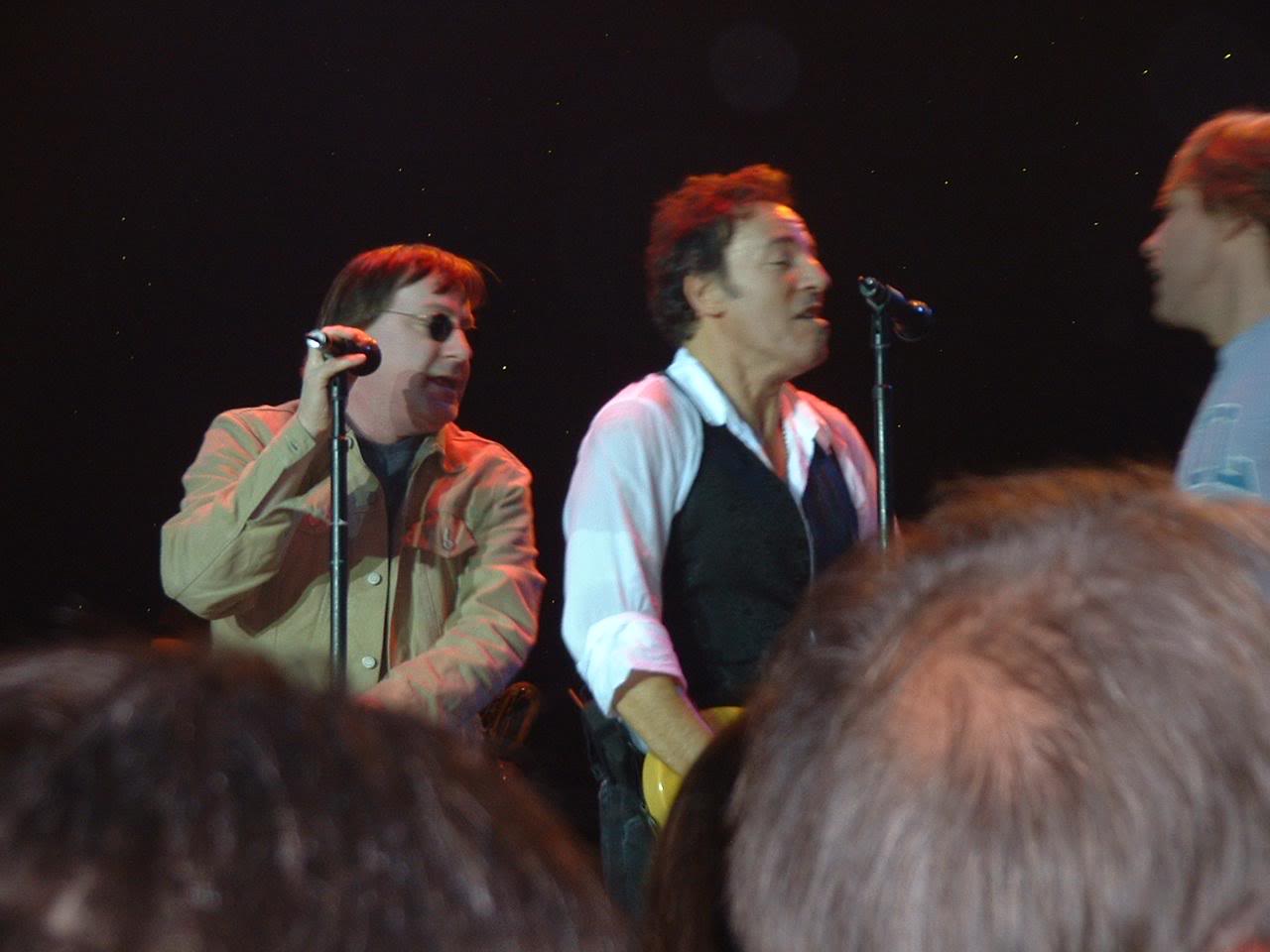 Yes, interests can collide in unexpected ways. Such happenstances can turn a rather bland cover into something with deep personal meaning, bringing different hobbies into something much more complete than their individual bits. Philately is that bridge time and time again.