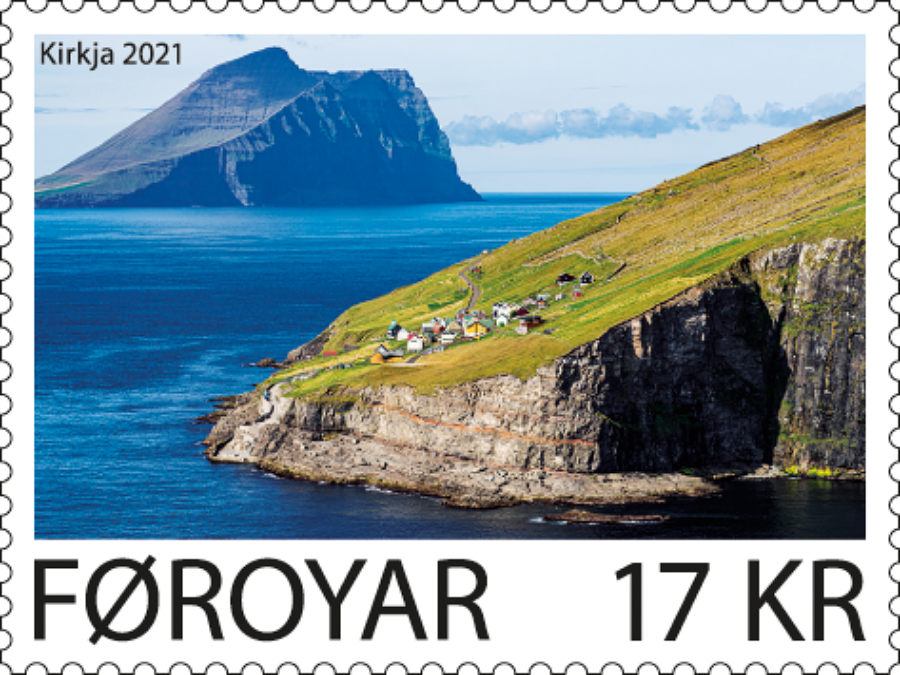 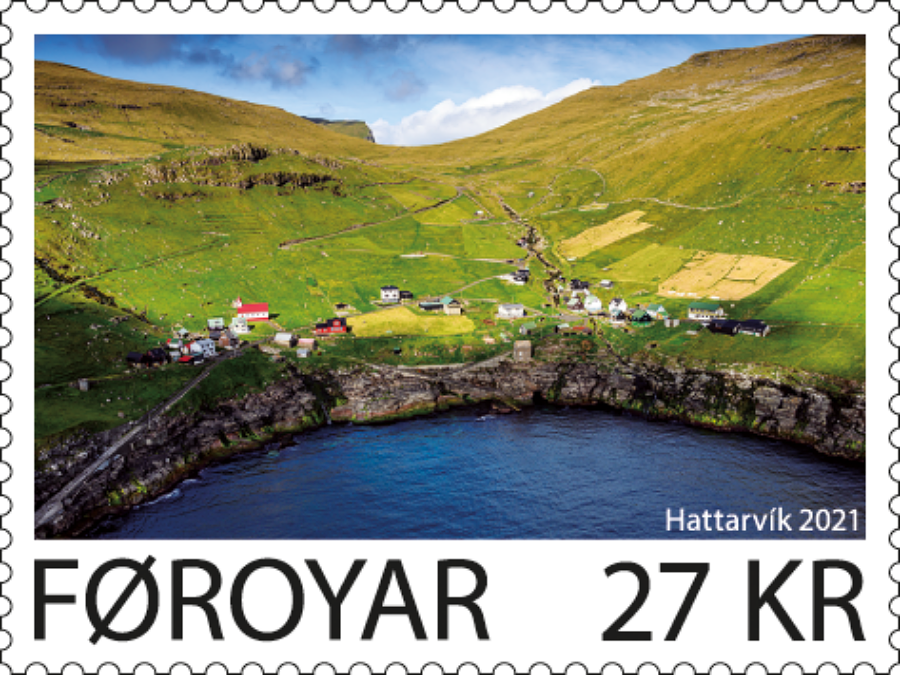 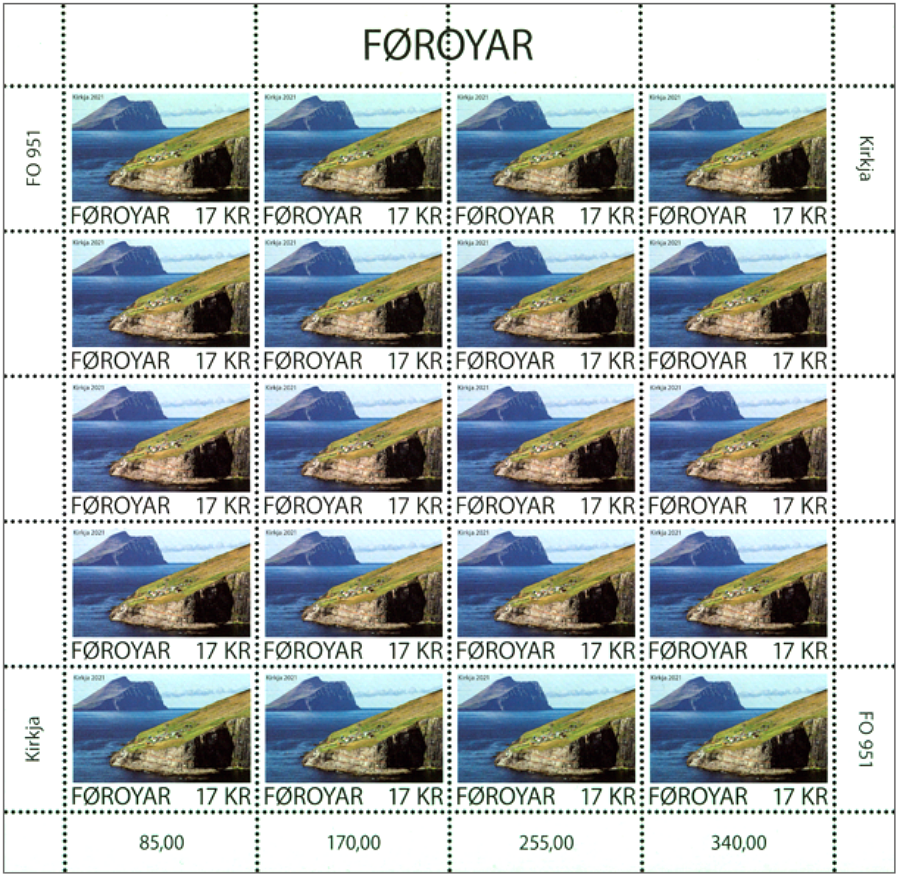 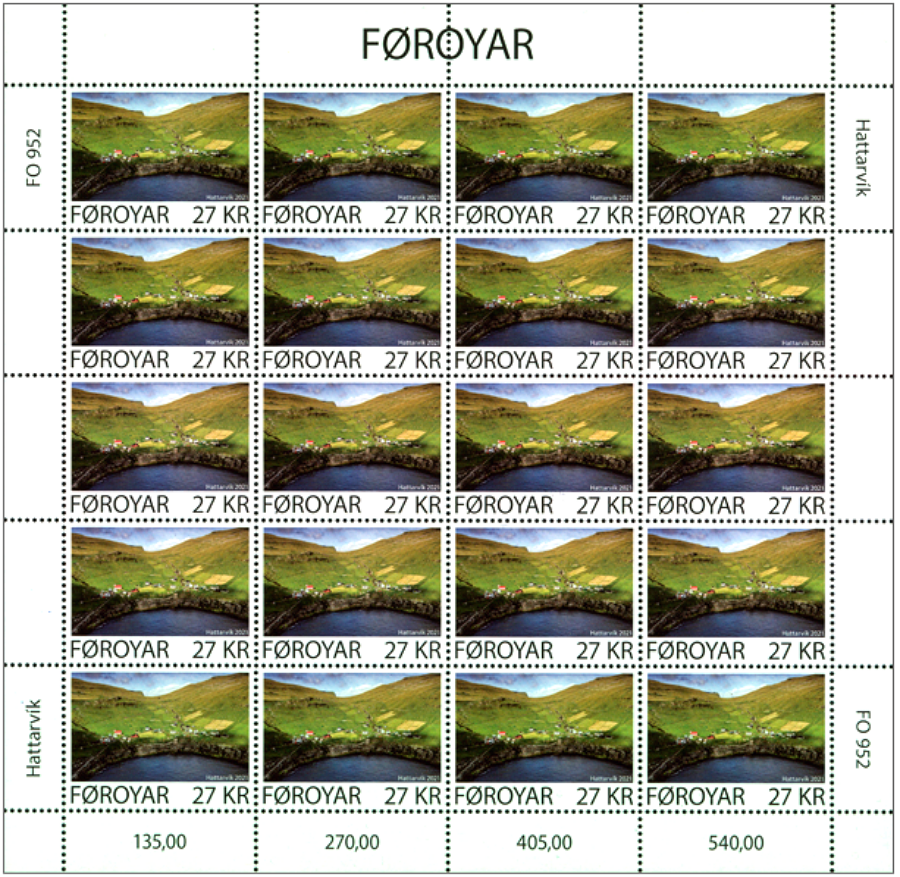 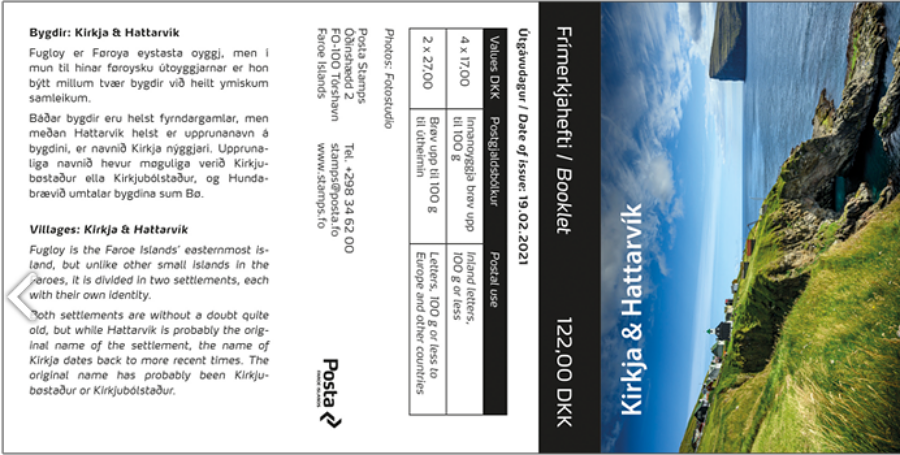 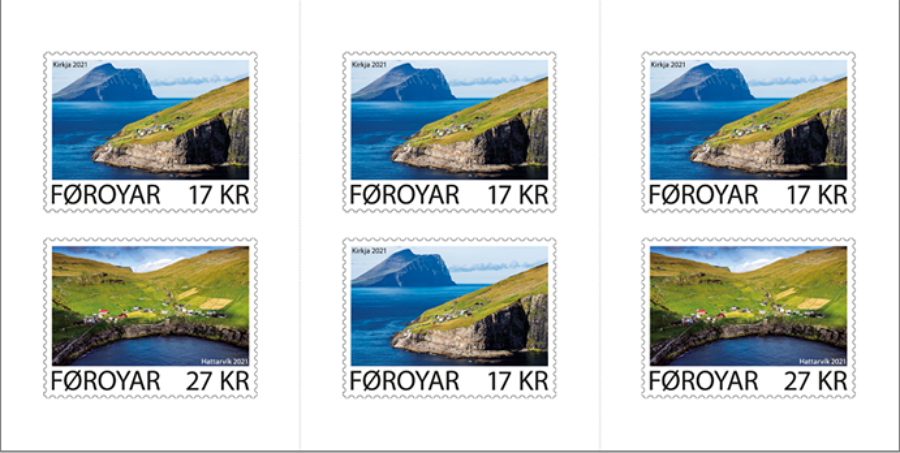 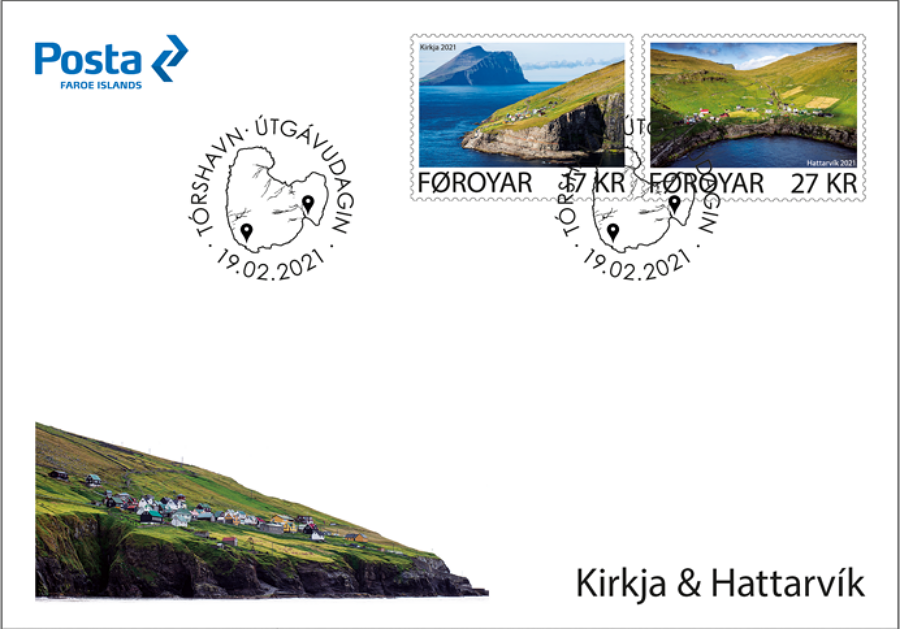 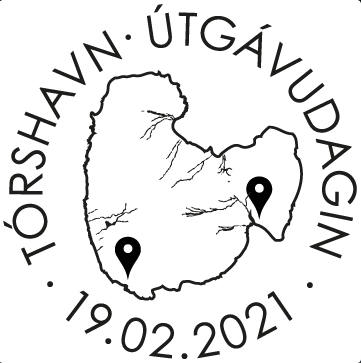 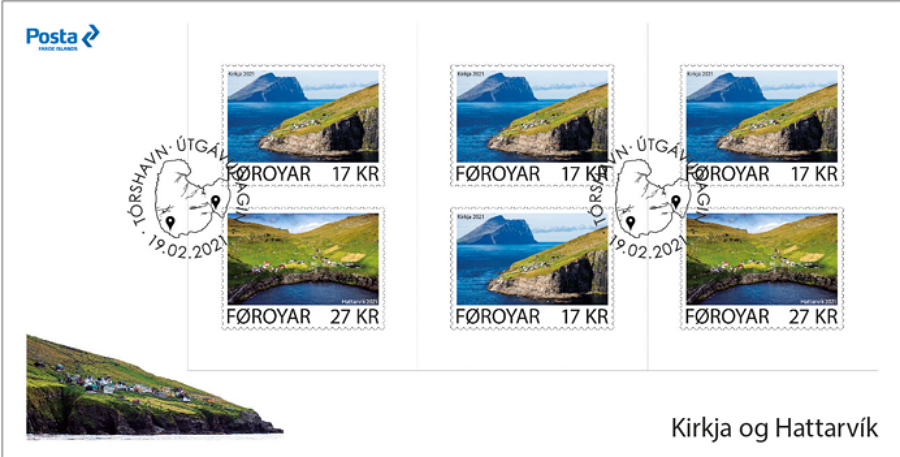 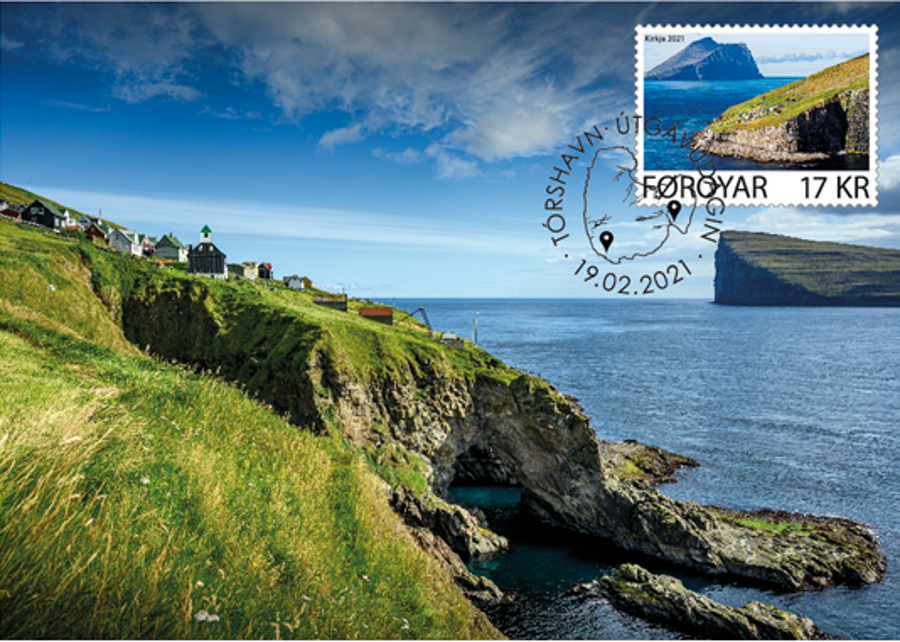 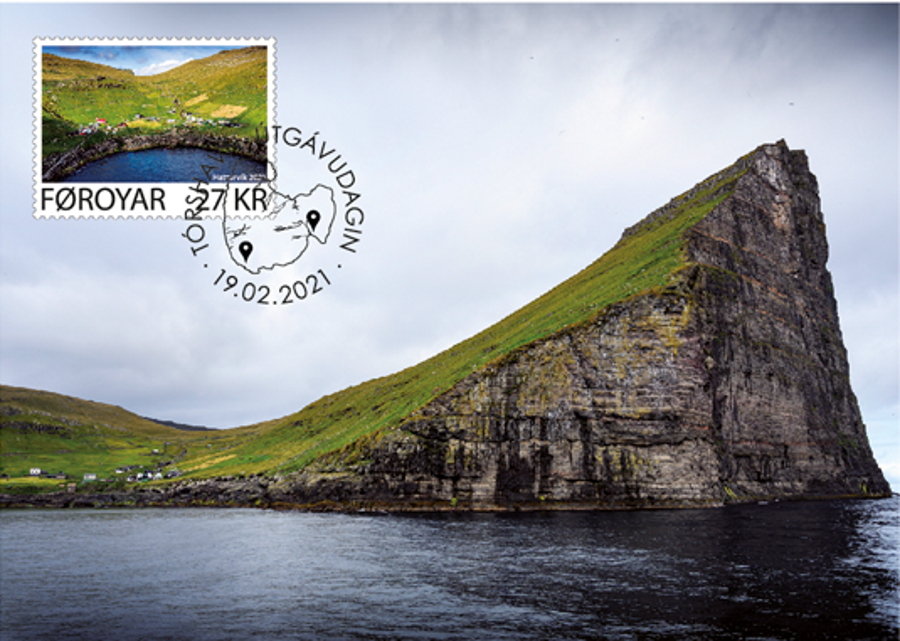 Kirkja and Hattarvík – One Island, Two Faces
Fugloy is the Faroe Islands’ easternmost island, but unlike other small islands in the Faroes, it is divided in two settlements, each with their own identity. Both settlements are without a doubt quite old, but while Hattarvík is probably the original name of the settlement, the name of Kirkja dates back to more recent times. The original name has probably been Kirkjubøstaður or Kirkjubólstaður. The Dog Letter, an ordinance from around the year 1400 which deals with the keeping of sheep dogs in the Faroe Islands, refers to the village as Bø. It is not easy to fathom the arrangement of property conditions in times of old, but today Hattarvík has 27 merkur of land (old measurement of land), of which 23.5 merkur is so-called royal estate property, ie. public land, and 3.5 is freehold land, ie. private property, while in the village of Kirkja the situation is different. Kirkja has 20 merkur, of which 3 are royal estate and 17 are freehold lands. Hattarvík is therefore a so-called royal settlement and Kirkja a so-called freehold settlement. This has undoubtedly had an effect on the inhabitants’ state of mind in these two settlements.
The landscape surrounding the two settlements is also strikingly different. Hattarvík is located in an arch in a small cove. Kirkja, however, is spread out on a mountain side. Hattarvík is surrounded by mountains and cannot be seen from any other settlement. Most houses in Hattarvík have a view of the open sea, although Eysturhøvdi, the eastern tip of the neighboring island of Svínoy, can be seen from some of the houses. Kirkja lies open on the south side of the island. All houses in the village have magnificent views of the neighbouring islands Svínoy, Borðoy and Viðoy. Few places in the Faroe Islands have such a beautiful view as the village of Kirkja, making the village very popular as a vacation spot. 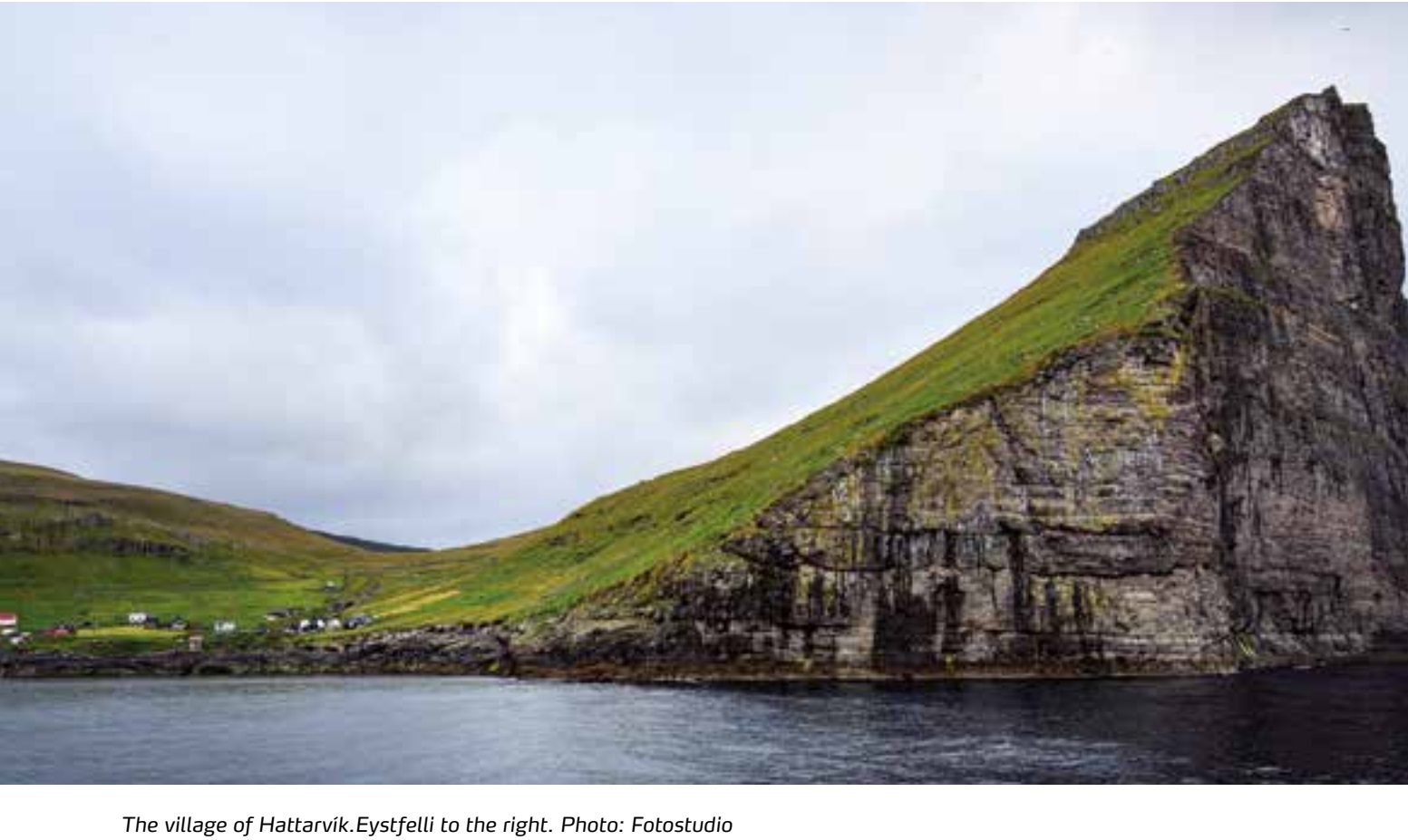 From a geological point of view, the most interesting thing about the island is the Fugloy/Svínoy shelf. The shelf consists of molten lava, which is compressed between other layers of lava. It is divided into two parts and provides the proof of these two islands once being one island. When sailing past Selnes on Svínoy, you will be able to clearly see this geological phenomenon and it is also notable in the promontory between Kirkja and Hattarvík. Above Hattarvík, the phenomenon is again very clear, and has been named Gullheygur (Golden hillock).
According to legend, the dragon lies in Gullheygur on its hoard of gold, having been bewitched by the sorceress Steinvør. The dragon rests its head on Øskudunga (Ash Mound) close to the river Kellingará (Witch’s River). This legend dates from the time of King Harald Fairhair, approx. year 900 A.D. A few centuries later, Hattarvík became known as the residence of the Robber Band, a group of four rebels who assumed power in Fugloy and wanted to subjugate the entire Faroe Islands. The well-known saying “Sailing from Eystfell is beautiful” (Eystfell being the steep promontory at Hattarvík) is attributed to Sjúrður at Kellingará – one of the four robbers. In the 17th century, Hattarvík is known as the residence of the hero and nobleman Justinus and his son Jógvan, who became prime minister in 1629. The Book of Fugloy – a collection of 97 poems was written by Hanus, a farmer at Kellingará in the early 19th century. Hattarvík has certainly reared many talented people in times of old.
In relation to Hattarvík, Kirkja can boast of trolls, elves and hidden people who make their living in hills and mounds. Much of the historic area of Kirkja has disappeared into the sea because the village is completely at the mercy of the sea and wind. A day of tragedy in the winter of 1818 almost put an end to the settlement when six men from Kirkja perished in a boat accident. This incident had already been predicted one year earlier by the wizard “Fifth” in Hattarvík. In a certain family, the firstborn son was always named Hanus, he was the fifth in a row of children and well known for his witchcraft. Perhaps the Fifth had previously been in cahoots with the fearsome Fjørutrøll (the Beach Troll)? 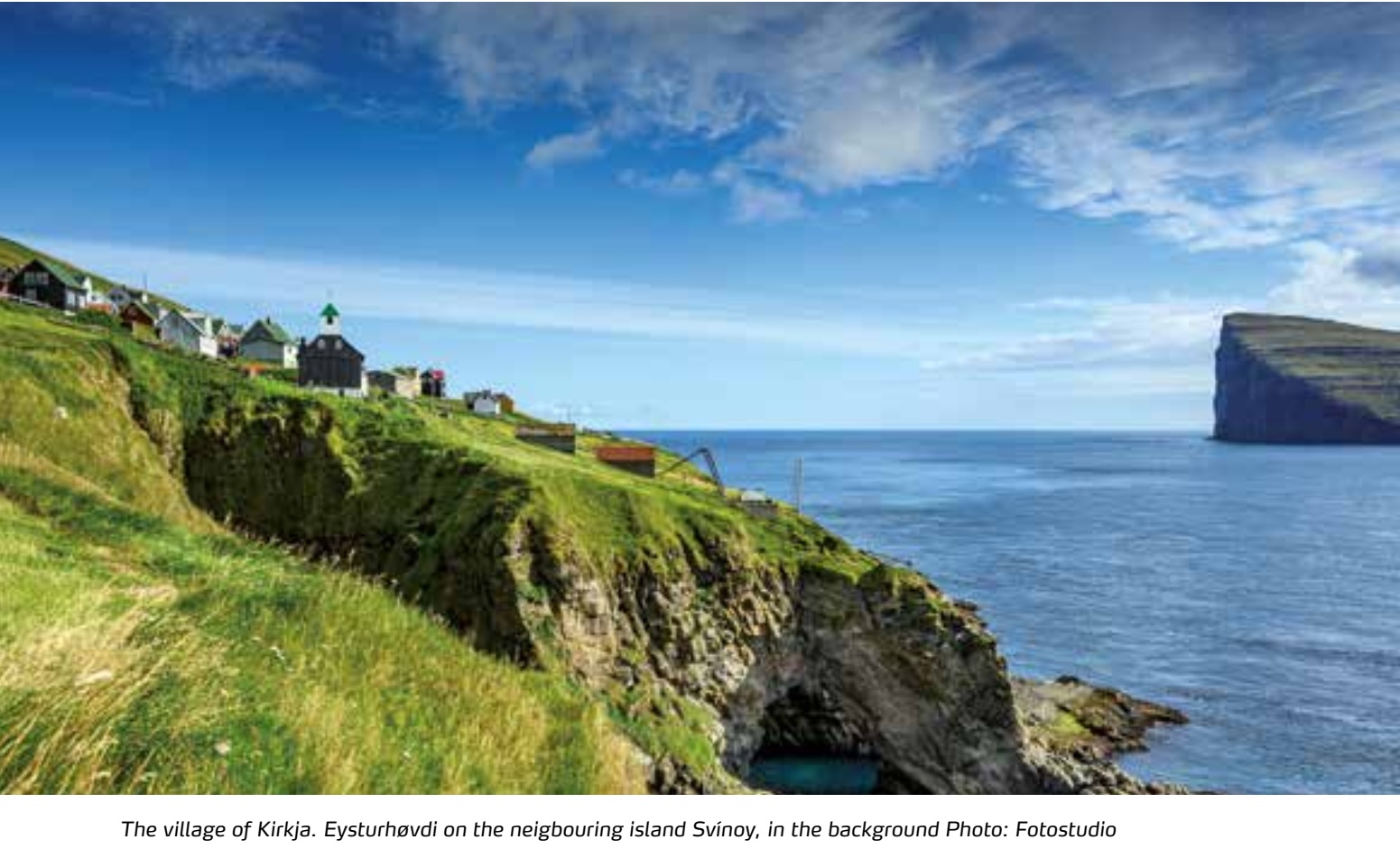 This tragic accident left the village without any able-bodied men, and life in Kirkja was on the verge of extinction. Shortly afterwards, the village lost its only church, which presumably had been standing in the same place for several centuries. The church was moved to Hattarvík in 1833.
But times change. Hattarvík – the settlement that owned most of the island’s land – clung to old community life and customs, while during the next century Kirkja experienced great progress and became a larger settlement. People moved in from other villages – also from Hattarvík – and took over the empty houses in Kirkja. In 1925, 148 people were living in Kirkja, the largest population ever in that village, and in 1933 Kirkja again got its own church which was erected in the same place where the former churches had stood. In recent times, Kirkja has fostered great poets and politicians. Already in 1888 a school was established in the village, whereas Hattarvík did not get its own school until 1925.
Today, Kirkja is the main settlement in Fugloy. Several people live there and the public assignments and functions mainly find place in Kirkja. The village has a power plant, a shop, a school, a restaurant and a municipal office. The school in Hattarvík regrettably burned down a few years ago. It has now been rebuilt and serves today as a community facility, and houses the village’s public toilet. In recent years, Hattarvík has built up a thriving tourist business based on local food production and old cultural history. Thus, tradition can also become an asset in the present time.
Despite their rich history, the future does not look bright for either Hattarvík or Kirkja. During the last half of the 20th century, these two settlements have not been able to keep up with modernization and the population has fallen steadily. Without steady communications, the two settlements will become vacation settlements in a few decades.
Sámal Matras Kristiansen, September 2020.