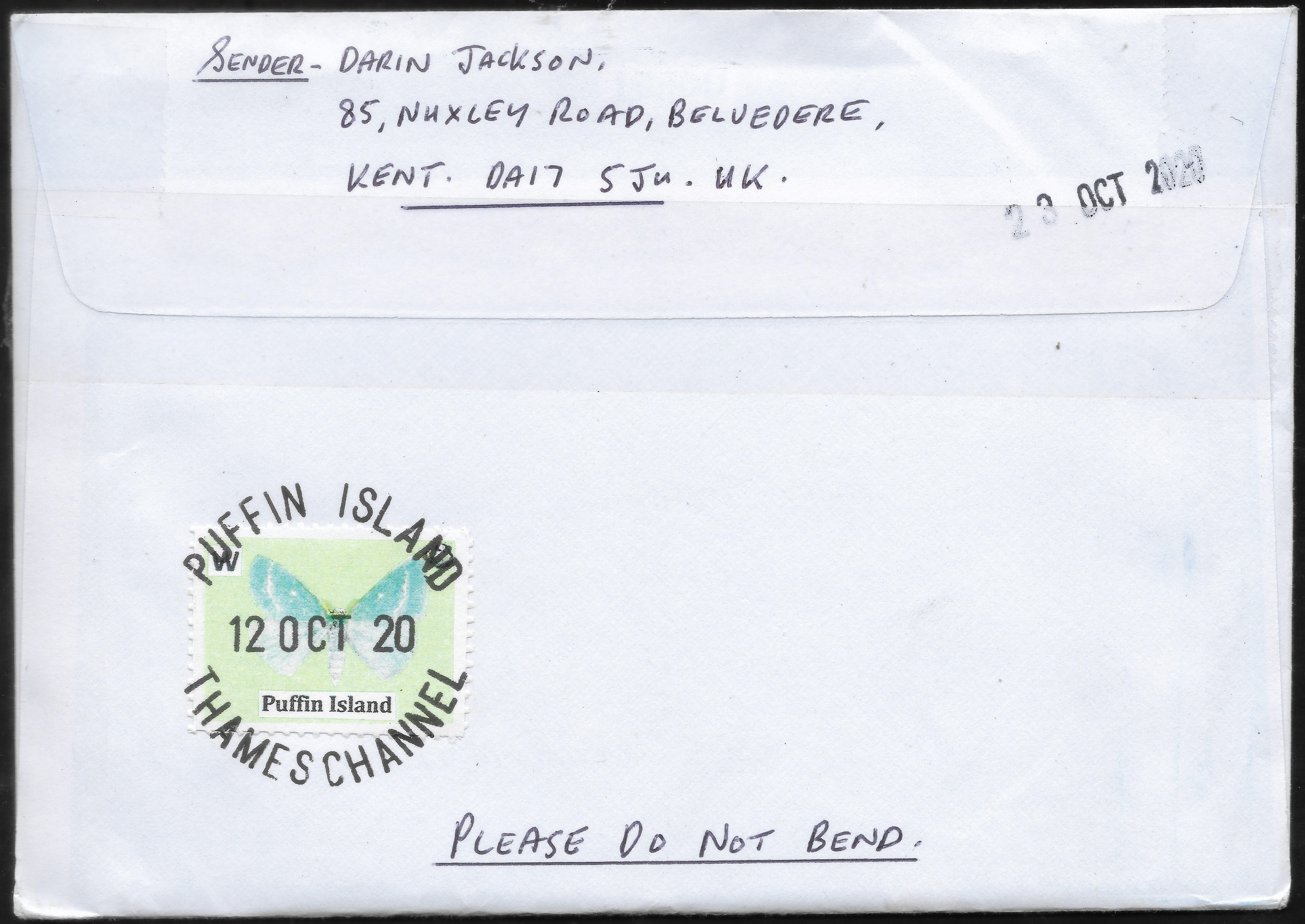 I decided to feature today’s cover initially because of the local post stamp and marking on its rear — from Puffin Island, Kent, England. This is actually a small private nature reserve on an eyot in the Thames Channel with the exact location kept a secret to preserve the habitat, i.e. visitation is not encouraged.

The local post was originally started by the Reverend Robert Jackson who overprinted British stamps with the word PUFFINEA in black printed diagonally. This practice started in the 1950s to prove inward correspondence had been received and continued until Reverend Jackson’s death in 1974. The stamps were also used on some outgoing mail.

Following the reverend’s death, his son Alan Jackson changed the name from Puffinea to Puffin Island and produced trial stamps based on the British Seahorse set, replacing the King’s head with that of a puffin. These proofs are rare and can occasionally be found on cover. Upon Alan’s death in 2002, his son Darin Jackson took up the “postmaster” duties and began producing his own sets of stamps beginning in 2005. Most depict puffins and an office on the eyot is used for postal purposes. Incoming mail is taken there by boat for processing.

Darin has designed and made his own personal perforating machine with a unique square type perforation. Puffin Island stamps are produced in low numbers and are much sought after. 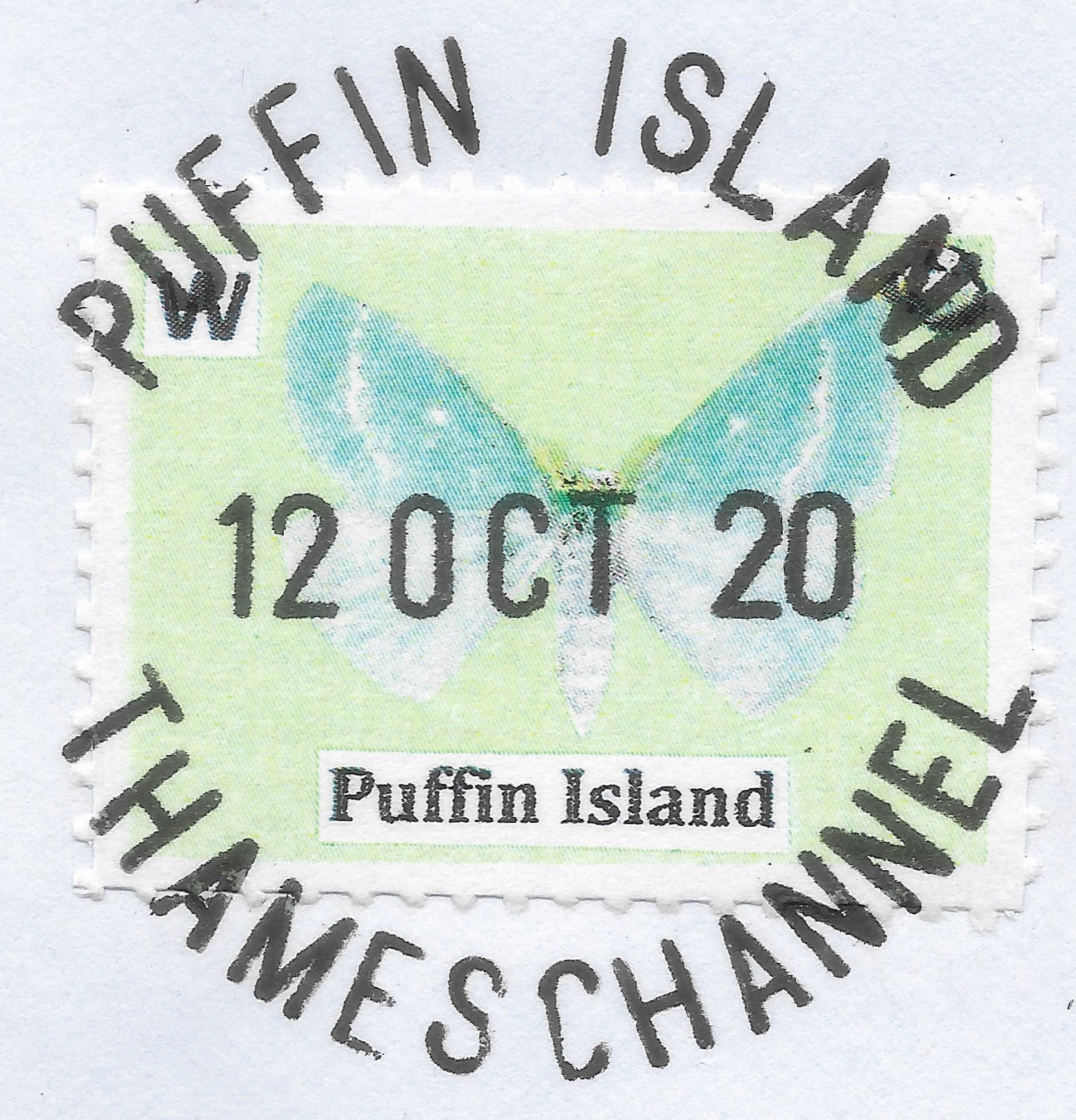 I have been collecting Lundy Island stamps (another local post off the shore of Devon) for a number of years; a number of these also feature puffins which happen to be my favorite bird. This envelope contained my first order of local post stamps from Puffin Island, a set that portrays the development of a puffin from birth to adulthood.

But that is not all that this cover offered up…. 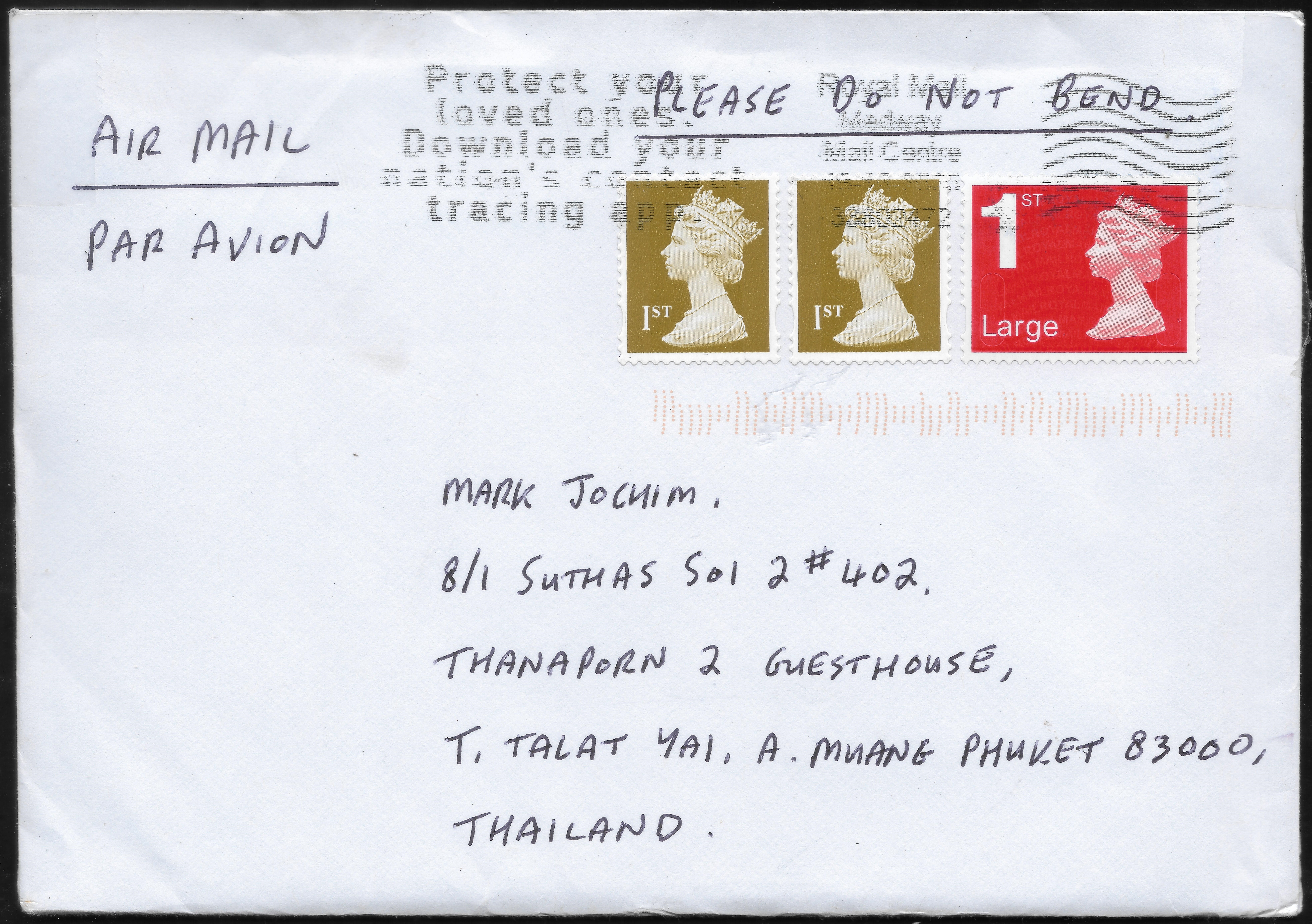 The three Machin stamps were canceled with one of several machine markings produced by Royal Mail in 2020 to call attention to the coronavirus COVID-19 pandemic. This one reads “Protect your / loved ones. / Download your / nation’s contact / tracing app” and was processed through the Medway Mail Centre on 13 October.

This new state-of-the-art distribution center in the Medway Town of Strood, Kent, was Royal Mail’s first-ever project delivered through design and build procurement, built by Watkings Gray International. In September 2020, the facility was in the headlines as several Royal Mail employees there had been diagnosed with the coronavirus.  As late as mid-December, mail was still being delayed in the area due to the outbreak.

A spokesman for Royal Mail said: “We understand that Medway currently has among the highest infection rates nationally. Despite the challenge this has brought the office in Gillingham, the office has been delivering each day. The office has been supplemented with extra resource to manage the increase in parcels and letters.”

This cover reached me in Thailand in just 10 days in the middle of the pandemic with a local outbreak during which people living near this mail-processing center were seeing mail delays of ten days and longer. A bit ironic, don’t you think?