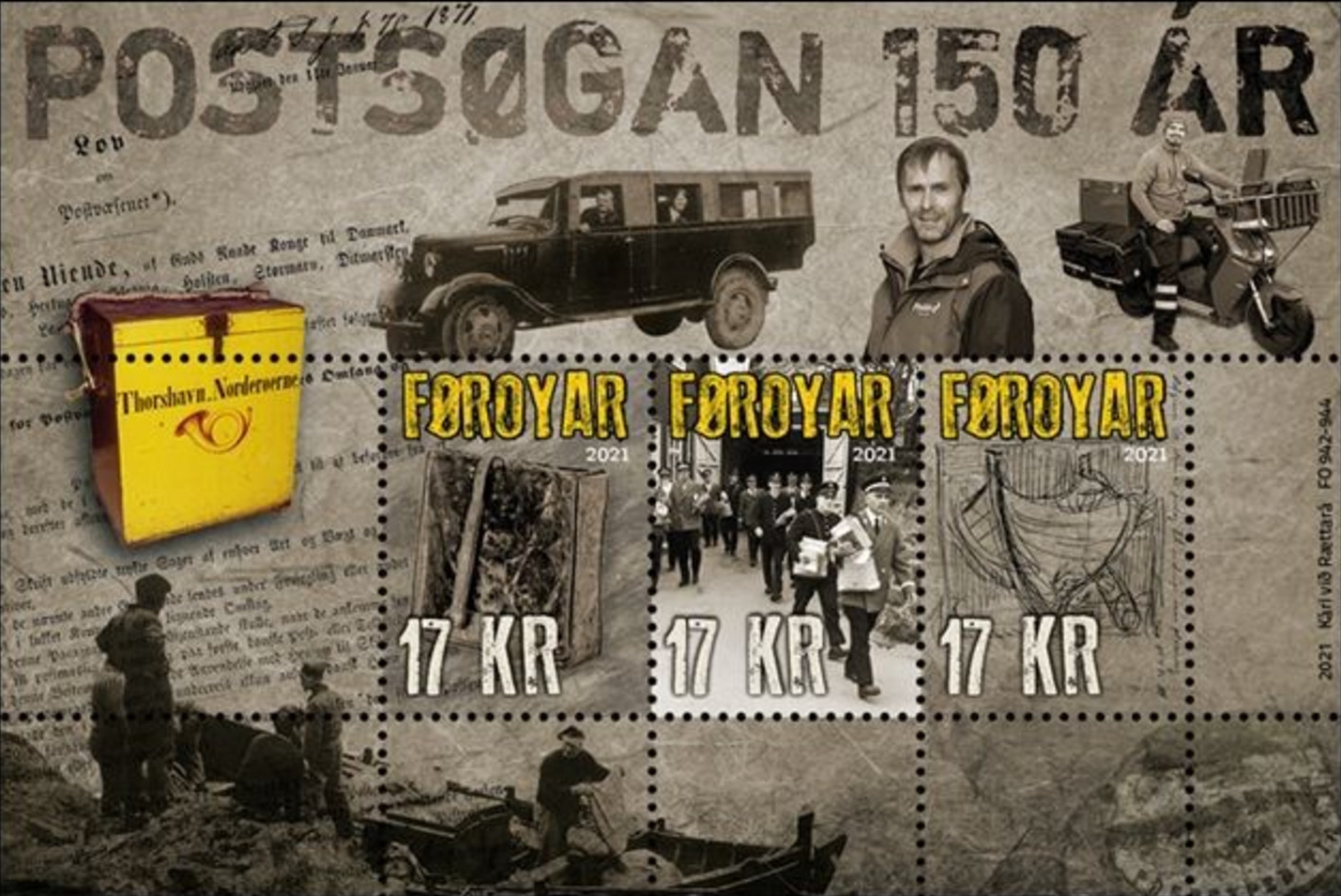 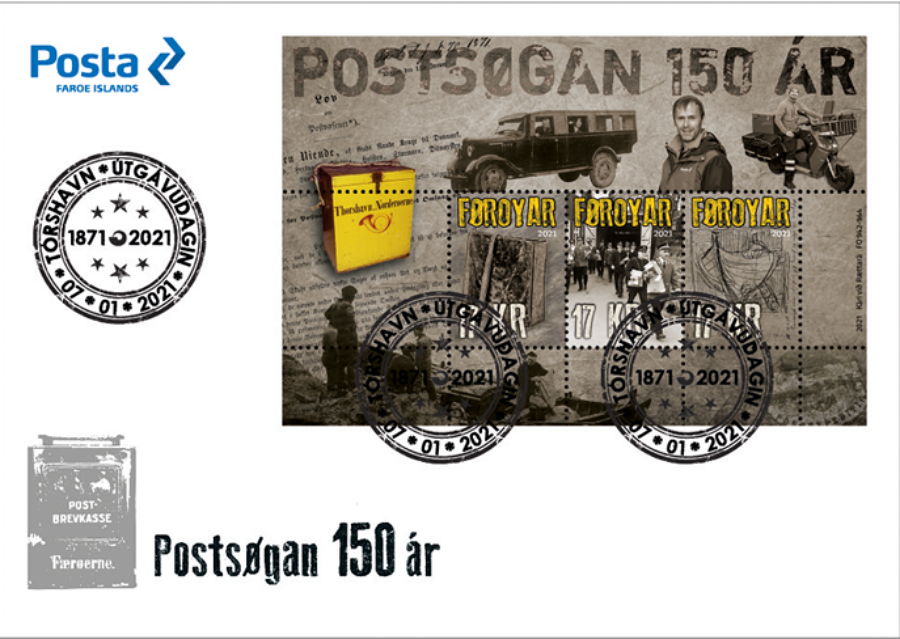 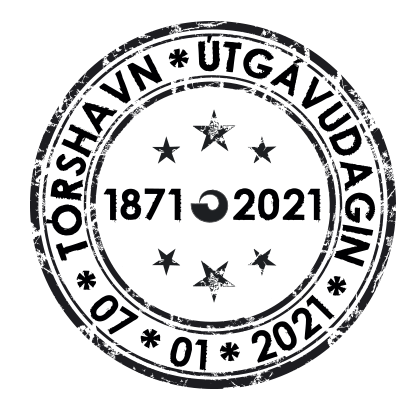 The second is the 45th anniversary of the Faroe Islands’ takeover of the Faroese branch of the Danish postal administration. On 1 April 1976, Postverk Føroya, later Posta, was established and became responsible for mail deliveries in the Faroe Islands, as well as the issuing of Faroese postage stamps.

We have chosen to celebrate the two anniversaries with an anecdotal look back in time at fragments of Faroese postal history. These little tales are told on a souvenir sheet containing three stamps.

On the sheet’s background, we see an excerpt of the original text of the Postal Act of January 7, 1871, printed in Gothic script. This update of the Danish Postal Act led to the organization of postal affairs in the Faroe Islands for the first time. Until then the Royal Trade Monopoly had delivered mail to the islands, but when the monopoly was abolished in 1856, this role fell to various private shipping companies, which received subsidies for delivering mail to the Faroe Islands. Domestic delivery took place via the old “skjúts” (conveyance) system, where men from the surrounding villages were required to transport travellers and bring goods and mail ashore – receiving no, or only partial, payment. 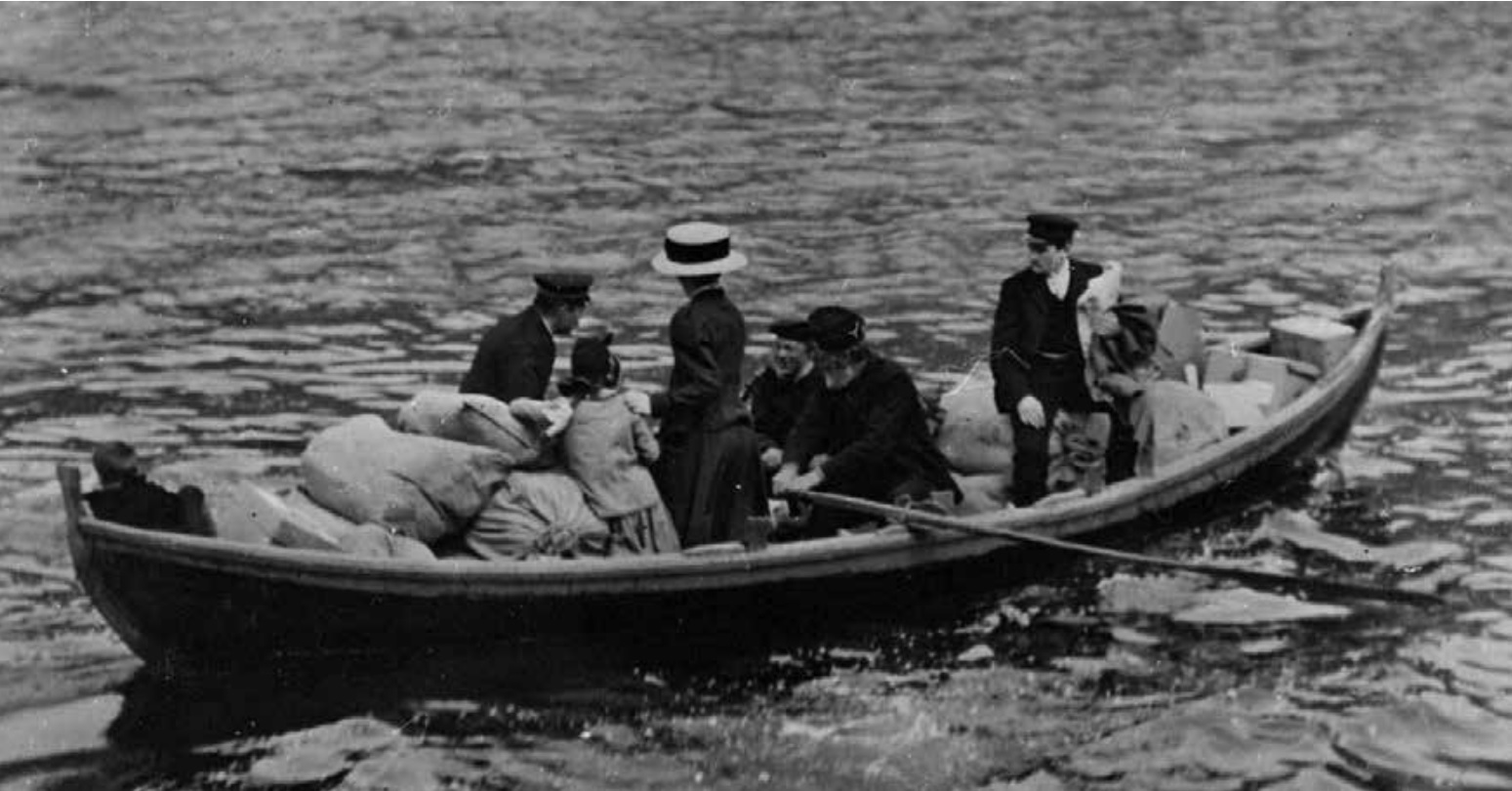 The First Postmen and Their Mailboxes
In 1870, the first post office was established in Tórshavn with the well-known H. C. Müller as postmaster general. As a result of the postal reform of 1871, three postmen were appointed the following year and charged with the task of delivering mail along three postal routes after the mail ship’s arrival in the Faroes.

The southern route of Tórshavn -Trongisvágur was serviced by Jóhannis á Reyni, who brought the post to Suðuroy via Kirkjubøur, Sandoy, Skúvoy to Hvalba. From there he went over the mountain to Trongisvágur, where the post was delivered to the district magistrate. For this trip back and forth, Jóhannis got 14 kroner.

The carpenter Jákup Jacobsen serviced the western route as a mail carrier. He left Tórshavn for Kvívík from where he was brought by boat over to Fútaklettur in Vágar. From there he went first to Sandavágur, then to Miðvágur where his route ended in the local rectory. For the trip back and forth Jákup got 8 kroner.

Conrad Nicolaisen was the first postman on the northern route. He left Tórshavn by boat heading for Søldarfjørður in Eysturoy. He then walked to Leirvík, from where he was brought by boat to Klaksvík on Borðoy. Conrad got approx. 10 kroner for each trip. All three postmen had to wait 12 hours at the terminus before returning to Tórshavn. Thus, mail in the Faroes was delivered seven times a year.

Each postman was required to carry 25 kilos of mail, and for this purpose, they each had their own mailbox, which they carried on the backs, just like the traditional Faroese “leypur“. The boxes were relatively large and rarely filled with mail, so they could also be used to keep clothes and other personal belongings. The souvenir sheet depicts Conrad Nicolaisen’s mailbox, marked “Thorshavn – Norderøerne”. This box can now be found at the Klaksvík Museum. 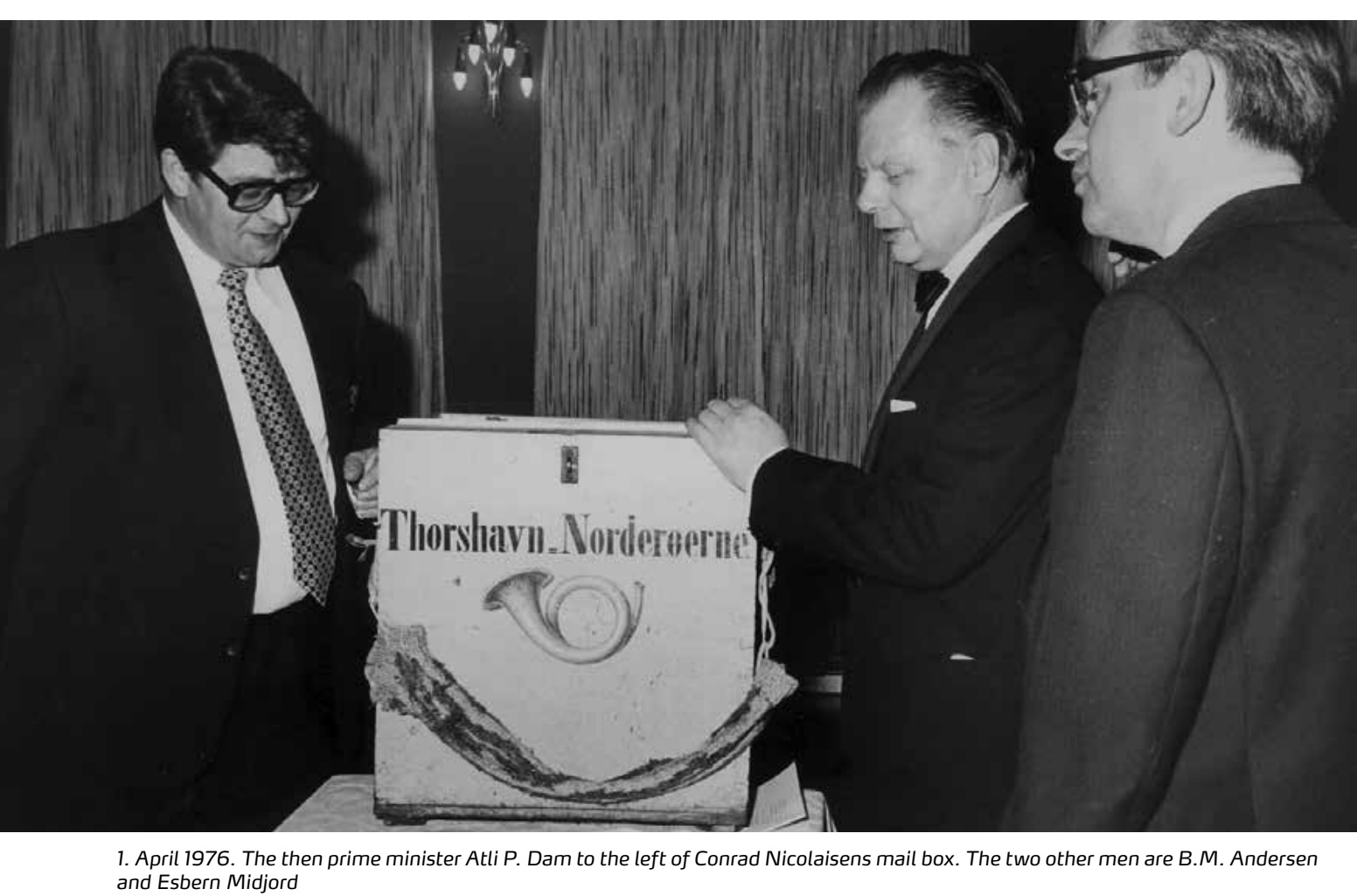 The mailboxes were unmanageable and much too large for the amount of mail in the 1870s. There were no parcels, only letters that did not take much space. Therefore, Petur í Mattalág, the son of Jóhannis á Reyni, who resumed his father’s postal duties on the southern route, wrote to the Danish postal administration requesting smaller and more manageable boxes for the mail. He was sent a knapsack made of sealskin, slightly larger than a child’s school satchel. The knapsack provided ample space for all mail to the southern half of the Faroe Islands. Only after 1890 did the volume of mail increase to such an extent that three or four men were needed to operate the southern route. The aforementioned knapsack is depicted on the left-hand side of the souvenir sheet.

The northernmost postal routes were notoriously difficult and sometimes directly dangerous in the early days of the Faroese postal service. This was especially true when the postmen had to climb high mountains or bring the mail by sea.

In 1927 or ‘28, the postman Marius í Áranstovu arrived at the village of Mikladalur on Kalsoy, which is known for its violent surf. There were two men on the mail cutter and Marius sailed alone to the landing site on the cutter’s dinghy. The surf was violent, as usual, and the village postman, Jóan Magnus Eliasen, jumped into the dinghy to help Marius get the mail ashore. Suddenly, a huge wave hit the dinghy and Jóan Magnus was swept overboard disappearing from sight. Marius quickly grabbed an oar, stuck it in the sea and moved it around under the boat. Somehow Jóan Magnus managed to get hold of the oar and was pulled back on board. The story goes that the provost, Jákup Dahl, was intending to travel back to Klaksvík that day on the mail boat, but was so shocked by the incident that he did not dare jump into the dinghy.

In 1927, the postal administration entered into an agreement with the municipality of  Gøta on Eysturoy to arrange postal transport to Gøta and Fuglafjørður. The mail was picked up in Søldarfjørður or Skipanes at Skálafjørður. The mail van was also supposed to include freight and passengers on the route. The mail van’s driver was Poul Kristoffer Poulsen from Gøta.

The car depicted on the souvenir sheet was provided for Poul Kristoffer’s use in 1935. It was generally known as “Abbabilur” (grandfather’s car), a moniker given to it by Poul’s granddaughter, Petra. The moniker stuck. Petra later married radio director Niels Juel Arge and has just become a great-grandmother at the time of writing. The people in the car are the driver Poul Kristoffer and his passenger, “Kunoyar” Johanna.

Conditions for driving in those days were quite bad as can be imagined. In heavy rain, the road up to the mountain pass at Gøta tended to disintegrate. Sometimes the conditions were so awful that men had to walk in front of the bus filling the worst potholes with stones. Thus, most of the stone-covered peat sheds along the route disappeared with time.

It was not uncommon for passengers to have to share seats with sheep and geese. Once, Poul Kristoffer even brought a large bull carcass from Fuglafjørður. The head and hooves had been cut off and the entrails removed from the carcass, but it was so bulky that the passengers to the mail boat in Søldarfjørður had to sit on it all the way from Fuglafjørður and Gøta. 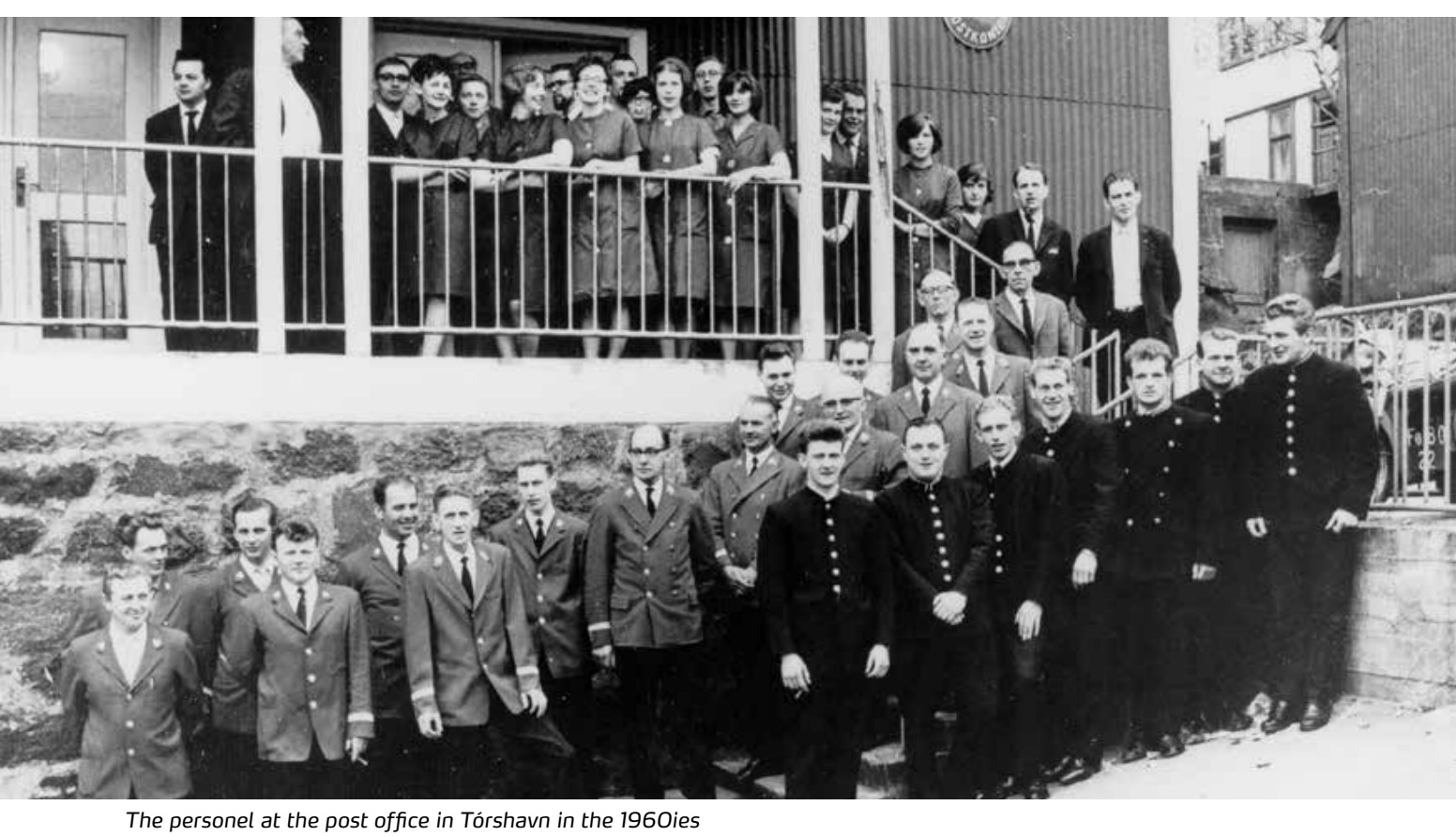 The Red Jackets March Out

The postmen in Tórshavn have always been a part of the cityscape. They were perhaps a little more visible before the Faroese took over the postal service due to the distinctive Danish postal uniforms. It looked a little like a festive parade of officials, when Tórshavn’s postmen left the old main post office in the center to go out on their routes. The seniors wore black trousers, red jackets, ties and caps, sometimes also red coats – the aspirants, however, in black coats with silver buttons and caps. The red postal jacket was only used in Tórshavn. In the rest of the country it was black. The postmen in Thorshavn also used the uniform when attending a colleague’s funeral. Even after the postal takeover in the Faroes, there is an example of the Danish uniform being used.

When the postal administration became Faroese, the Danish uniform was set aside. However, there were exceptions. The oldest postmen were able to continue as Danish officials, who in principle were employees on loan to Postverk Føroya – and thus continuing to wear the red Danish uniform. This was, for example, the case with Eiler Rubeksen, a well-known postman in the central office , who is depicted on the souvenir stamp. He continued to wear the uniform until he retired.

The March of the Blue Coats

Today’s postmen no longer have to climb high mountains on foot or cross treacherous straits and fjords in small boats. However, wind and weather conditions remain the same and working conditions are sometimes harsh. In addition, they do not maintain the same clothing traditions in the Faroe Islands, so after the takeover the uniform gradually changed and became more practical for everyday usage. The first Faroese uniforms consisted of a black windbreaker and black trousers. Over time, they have evolved into their current form, an azure waterproof windbreaker with dark blue sleeves fitter with reflective tapes – and Posta’s logo on the chest. The trousers are black with large side pockets and reflective straps on the legs. Inside the jacket, the postman wears either an azure fleece jacket, which is also used as a jacket in the summer, or a dark blue sweater with Posta’s logo on the chest.

When the Faroese branch of Post Denmark became Postverk Føroya, the first purely Faroese stamps were issued that same year. The motifs were the Faroese flag, a Faroese rowing boat in a boathouse and a postman from earlier times. The third stamp on the anniversary sheet is a quick sketch by the master engraver Czesław Słania, who engraved all three stamps that year. The sketch depicts the rowing boat and in the margin the following words are written: “Royal engraver’s CZ. Slania’s suggestions for the location of the inscription. 10.9.75. ”

In the lower right corner of the souvenir sheet is a frayed postal sign from the post office in Tórshavn. We leave it as a memorial over Faroese postal history – worn out by the ravages of time, by wind and weather and packed with really good stories.