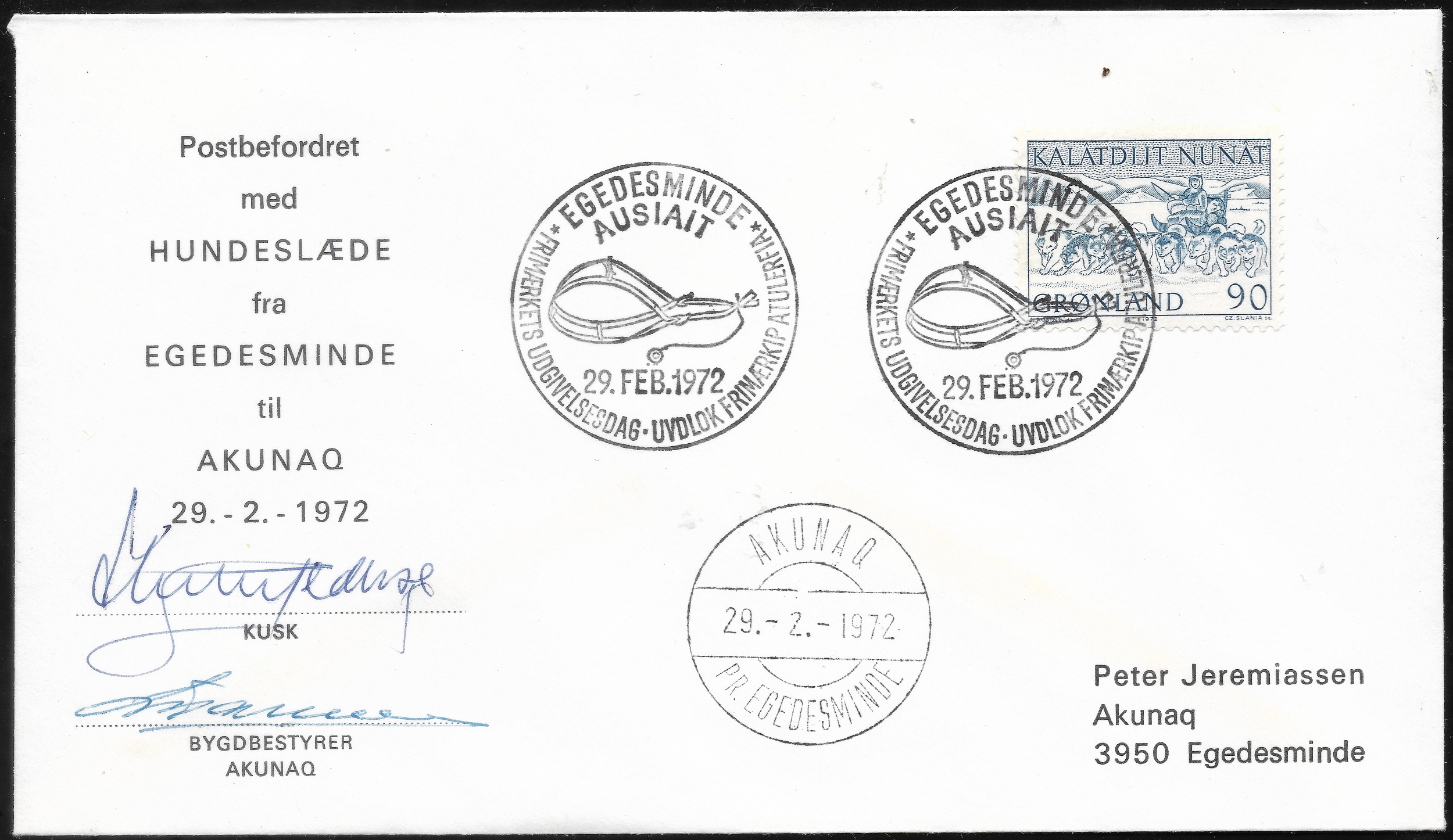 At first glance, this is just a first day cover for Greenland Scott #81, issued on 29 February 1972, a 90-øre blue recess-printed stamp picturing a dog sledge. However, a translation of the cachet from Danish to English reveals that “Post Carried by DOG SLED from EGEDESMINDE to AKUNAQ 29.2.1972” and it is signed by both the dog sled’s “coach” and the village manager at Akunaq. 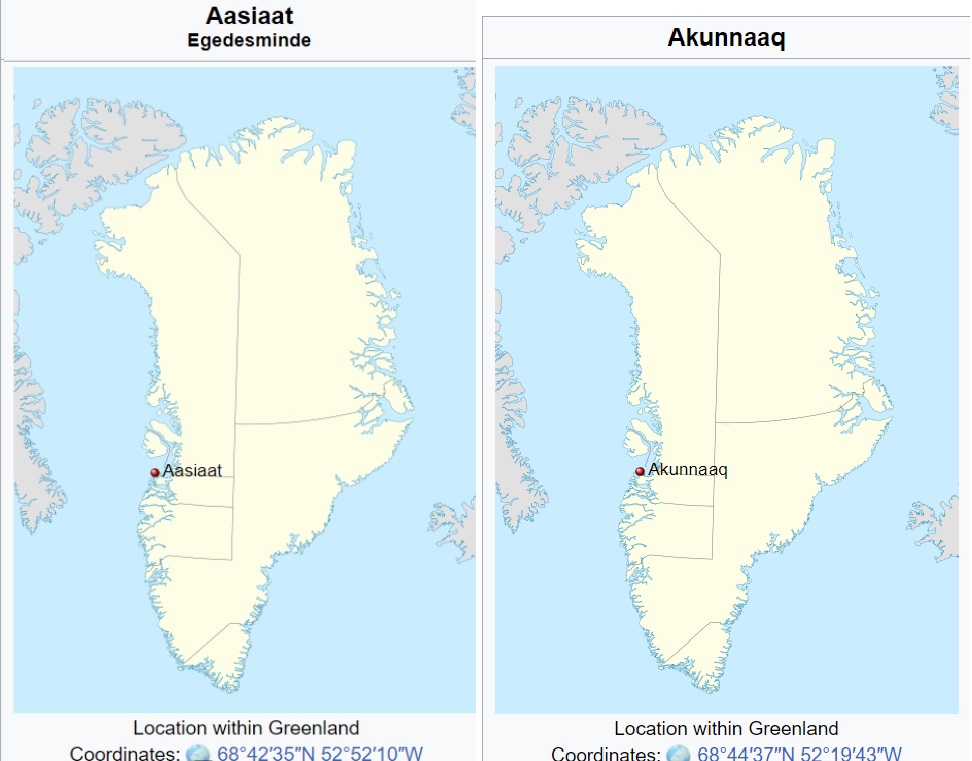 Egedesminde, now known as Aasiaat or Ausiait, is a town in the Qeqertalik municipality in western Greenland, located in the heart of Aasiaat Archipelago at the southern end of Disko Bay. With a population of 3,069 as of 2020, it is Greenland’s fourth-largest town. In Greenlandic, Aasiaat means “spiders” (Danish: Edderkopper). The exact explanation for this is yet to be determined because of the lack of historical facts of the origin of the name. The most common assumption is that when the town was founded as a mere settlement, it was abundant with spiders. Alternatively it might just be a relic of Eskimo superstition that spiders bring luck.

Like in the rest of Greenland, spiders are rarely seen in the town in modern times.

Aasiaat is sometimes referred to as the Town of the Whales, since marine mammals such as whales and seals are a common sight.

Archaeological projects in the region have suggested human habitation in the region that includes Aasiaat as far back as the 5th millennium BC. The earliest modern settlers dated to around 1200; these were probably subsistence hunters. These inhabitants hunted harp seals and capelin (ammassaat) near Sydøst Bay in the spring. In the summer, they moved to Nassuttooq for reindeer and halibut. During autumn, the people of Disko Bay returned home to hunt small harp seals. In the winter, the bay froze over, and they hunted narwhals and Beluga whales. These early people designed and built their own kayaks and umiaks when the water freed up; in the winter, they used qamutits.

The settlement that would become Aasiaat was founded in 1759 by Niels Egede, son of Hans Egede, a Norwegian missionary. Named Egedesminde Colony after him, it was located north of Nordre Strømfjord, and was 125 km south of Aasiaat’s current location. The town was moved to its current site in 1763. Most villagers were whalers, and the smallpox germs they carried to the region ravaged the native population, especially during the 1770s.

Aasiaat saw much growth in the first half of the 20th century. In 1932, the town opened the first school in the country which allowed women to obtain secondary education. One of its first graduates was the first woman novelist of Greenland, Mâliâraq Vebæk, who was valedictorian of her graduating class in 1934.

On 3 May 1940, a treaty signed in Godhavn allowed American relief airplanes bound for the British Isles to use Greenlandic, Icelandic, and Scottish airspace. A result of World War II was the fact that Denmark, under the control of Nazi Germany, could not freely send supplies to Greenland; this task fell to the United States and Canada. Supplies were stored near Aasiaat, and were then transferred to other towns of the region, such as Uummannaq and Sisimiut.

Aasiaat has grown much since the war. A weather station was constructed in 1942 by the Americans. Cod, an economically popular fish since the 1930s, were caught and sent to a new factory to be salted and packed. Other businesses sprang up, accommodating to the resources and climate of the region. This boom reached its peak in the 1950s, when a power plant and telecommunications station were installed.

In 1998, a new landing strip was opened to the public (previously a heliport was the only aerial facility); it is near a shrimp processing factory. Today, almost 4,800 people live in Aasiaat and its neighboring settlement, Kangaatsiaq.

The largest island of the Aasiaat Archipelago is Saqqarliup Nunaa, which is uninhabited, but has buildings to accommodate tourists. On the western tip of the island is the abandoned village of Manermiut. As of 2013 the total population of the archipelago is spread among three settlements:

The destination for today’s dog sled cover was Akunnaaq (old spelling: Akúnâk), a settlement in the Qeqertalik municipality in western Greenland. Its population was 66 in 2020. Akunnaaq is located 23 km (14 mi) east of Aasiaat on the Akunnaap Nunnaa island. The settlement was founded in 1850.

Air Greenland serves the village as part of government contract, with winter-only helicopter flights between Akunnaaq Heliport and Aasiaat Airport. Settlement flights in the Disko Bay are unique in that they are operated only during winter and spring.

During summer and autumn, when the waters of Disko Bay are navigable, communication between settlements is by sea only, serviced by Diskoline. The ferry links Akunnaaq with Aasiaat, Ikamiut, and Qasigiannguit.

Having noticed that I only had one Greenlandic stamp in my collection last year, I ordered a large mixed lot from a stamp dealer in Denmark which is where this cover came from.  It, along with scans of around one hundred stamps from the Danish territory, were sitting untouched in my June 2020 scans folder and I happily spent this evening cataloguing the stamps and covers. Here’s a mint copy of Scott #81: 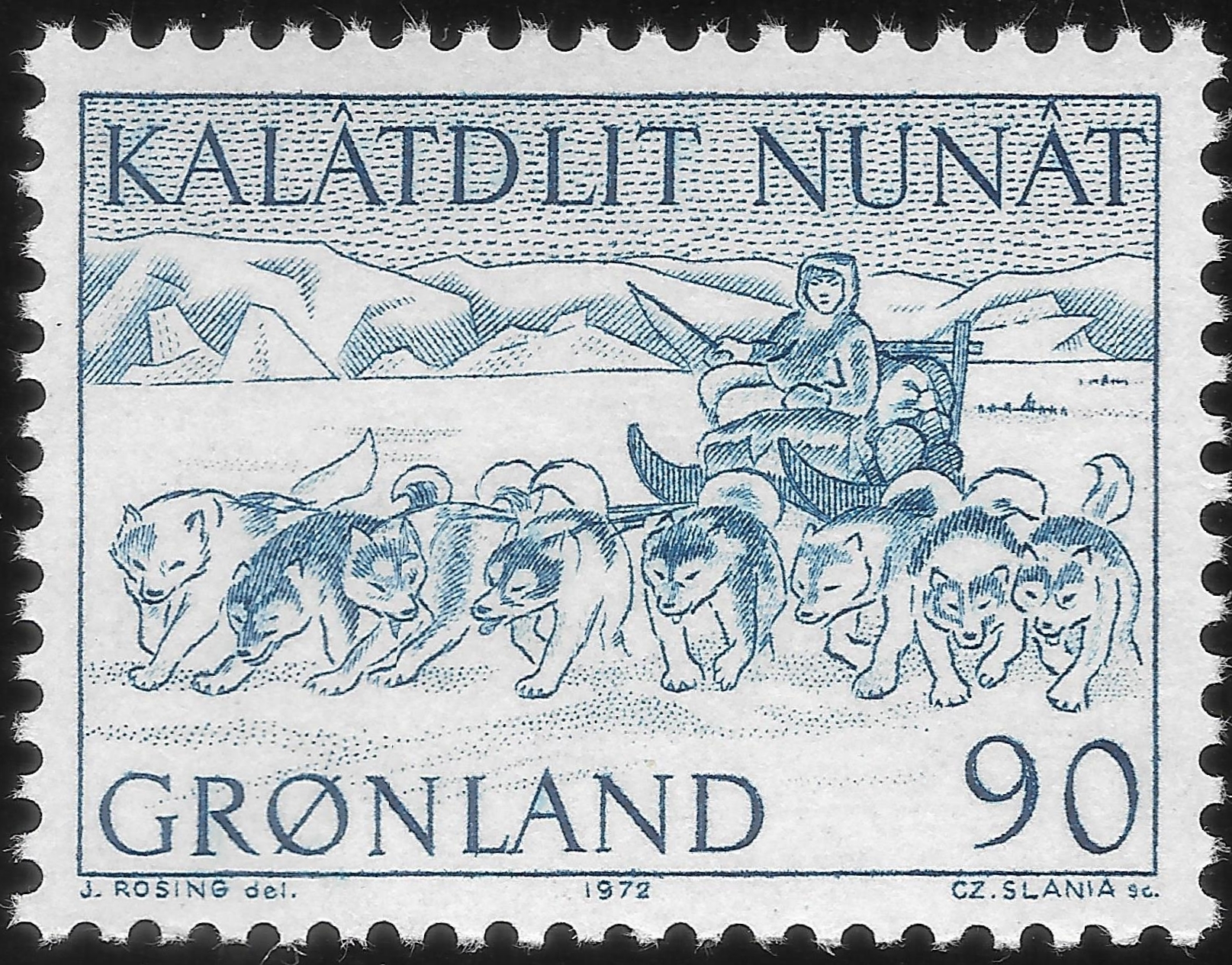 Sled dogs have been used in the Arctic for at least 2,000 years and were important for transportation in Arctic areas until the introduction of semi-trailer trucks, snowmobiles and airplanes in the 20th century, hauling supplies in areas that were inaccessible by other methods. They were used with varying success in the explorations of both poles, as well as during the Alaskan gold rush. Sled dog teams delivered mail to rural communities in Alaska, Yukon, Northwest Territories and Nunavut. Sled dogs today are still used by some rural communities, especially in areas of Alaska and Canada as well as much of Greenland. They are used for recreational purposes and racing events, such as the Iditarod Trail and the Yukon Quest.

The Greenlandic Inuit have a very long history of using sled dogs and they are still widely used today. As of 2010, some 18,000 Greenland dogs were kept in western Greenland north of the Arctic Circle and in eastern Greenland (because of the effort of maintaining the purity of this culturally important breed, they are the only dogs allowed in these regions) and about half of these were in active use as sled dogs by hunters and fishers. As a result of reduced sea ice (limiting their area of use), increasing use of snowmobiles, increasing dog food prices and disease among some local dog populations, the number has been gradually falling in decades and by 2016 there were 15,000 Greenland dogs. A number of projects have been initiated in an attempt of ensuring that Greenland’s dog sledding culture, knowledge and use are not lost.

The Sirius Patrol, a special forces unit in the Danish military, enforces the sovereignty of the remote unpopulated northeast (essentially equaling the Northeast Greenland National Park) and conduct long-range dog sled patrolling, which also record all sighted wildlife. The patrols averaged 14,876 km (9,244 mi) per year during 1978–1998. By 2011, the Greenland wolf had re-populated eastern Greenland from the National Park in the northeast through following these dog-sled patrols over distances of up to 560 km (350 mi).

I’ve long been fascinated by sled dogs (and Greenland).  The Wikipedia page on sled dogs has much more information than I have included here, as does an entry on the Molly’s Bugs blog.

I believe this cover is the only piece of dog sled mail in my collection. This form of animal mail transport saw limited use in the northern parts of Alaska, Canada and Russia during the first half of the 20th century.

In the early years of Alaska settlement, there was no regular mail service to the interior post offices during the winter months (October to May), although individuals might agree to transport letters to coastal areas. Regular service seems to have begun around the 1910s. In the 1930s, airplanes began to be used for mail transport, but postmasters were still allowed to use dogs for “emergency mail service”, and in the 1940s cachets were produced reading “Alaska Dog Team Post” and depicting a team. The last regular-scheduled dog team route was shut down in 1963, when Chester Noongwook of Savoonga on St. Lawrence Island retired his team.

I would love to add more of these interesting items to my collection, either “authentic” or “philatelic” are okay with me….