First Installment of a New “Series”….

Like most collectors that I know, I have way too much material that never seems to get out of storage boxes and into some form of display medium, be that a stock book, a proper album or something else entirely. I also have items that I can never seem to fit into a blog post as they are so, in a word, “weird”. What to do but to start a new blog “series” or two to deal with the material that just sits around….

I am pretty good about processing incoming mail… to a point.  I believe our local postman (who drives a 150cc Honda motorbike susceptible to all the vagaries of monsoonal weather and glacially-moving traffic) holds off delivering to my guesthouse until he has enough items in his bag to make the trip worthwhile.  When I receive my periodic pile of postal miscellany, I record items received from dealers and postal administrations into a spreadsheet and try to scan everything (outer packaging and inner goodies) within a day or two of receipt.

I eventually crop the scans of stamps and use these to look them up in catalogues prior to adding the actual stamps into my albums or stock books.  The covers and cards, well, tend to just sit in limbo — the scans and the realia.

In an effort to do something “constructive” with these stray postal items, I have decided to try and post one a day here (for covers) and on my postcard blog (for postcards and maximum cards).  I will simply randomly select a scan and post it. They may be items addressed to me that originally contained regular mail (usually more stamps or covers) or they may be items such as first day or special event covers. Some may be downright boring and some may have some deeper meaning that I may try to convey. I plan to keep the commentary to the bare minimum to make it quick and easy.

For this first “Cover A Day”, I decided to present two not so random covers along with a bit of background:

In late September 2020, myself and a fellow collector from Egypt had become somewhat frustrated with the amount of disinformation amidst the many stamps that had been released and were in the works marking the global onslaught of the coronavirus COVID-19. Together, we set up a Facebook group designed to provide clear and accurate details on these stamps while trying to discourage the rampant commercialism that plagues so many Facebook groups and pages. Much like this blog, I wanted simply to provide the information that the stamps existed along with suggestions of how to obtain them from the postal administrations or through dealers (I have long discouraged trades as I feel that support of dealers is important to the long-term health of the hobby).

We called this group Pandemic Philately and soon added a third administrator from Canada.

Along with the group’s birth, I digitally put together a logo character I called “Mask Man” who initially held a magnifying glass in one hand and a pair of tongs in the other. 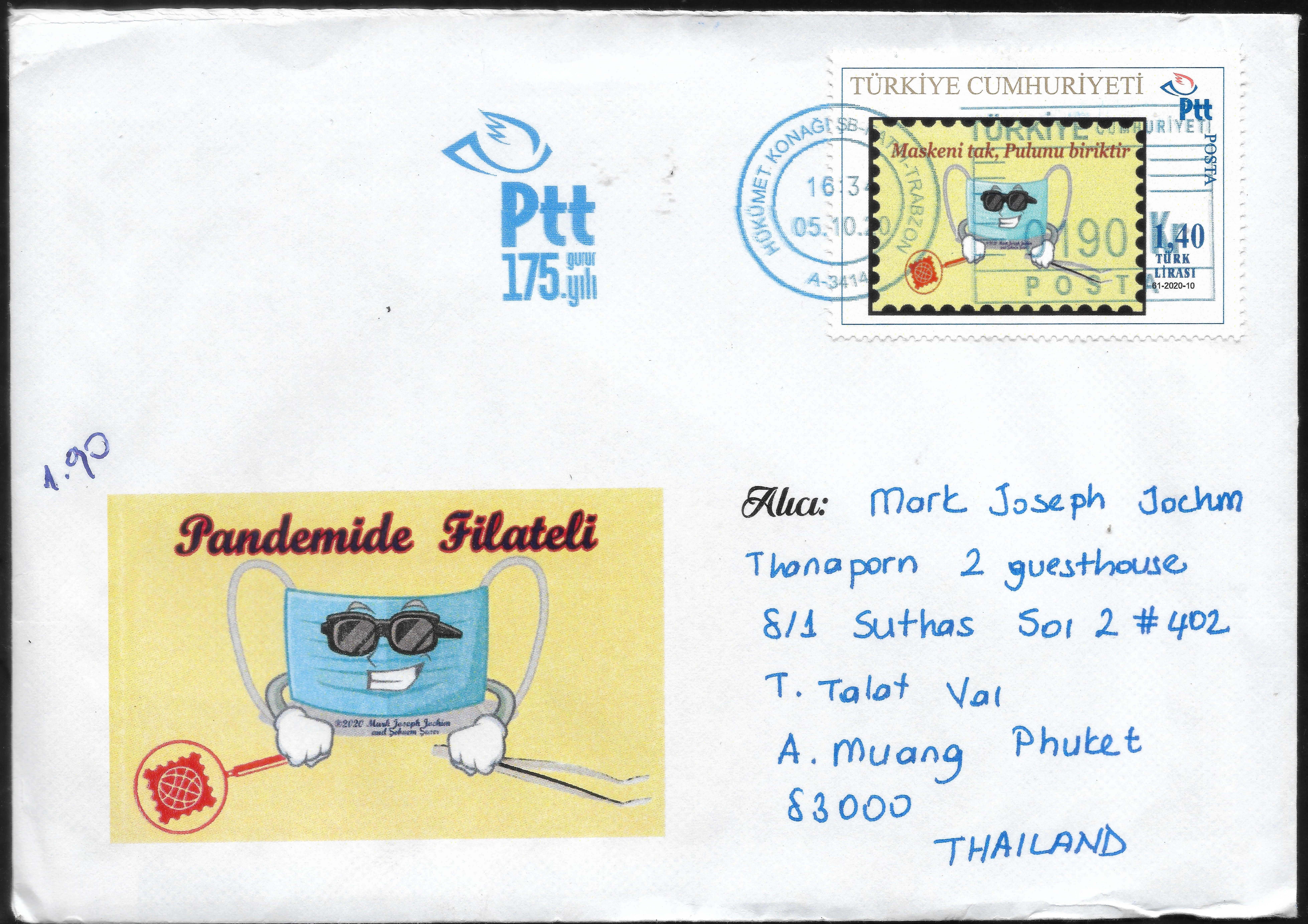 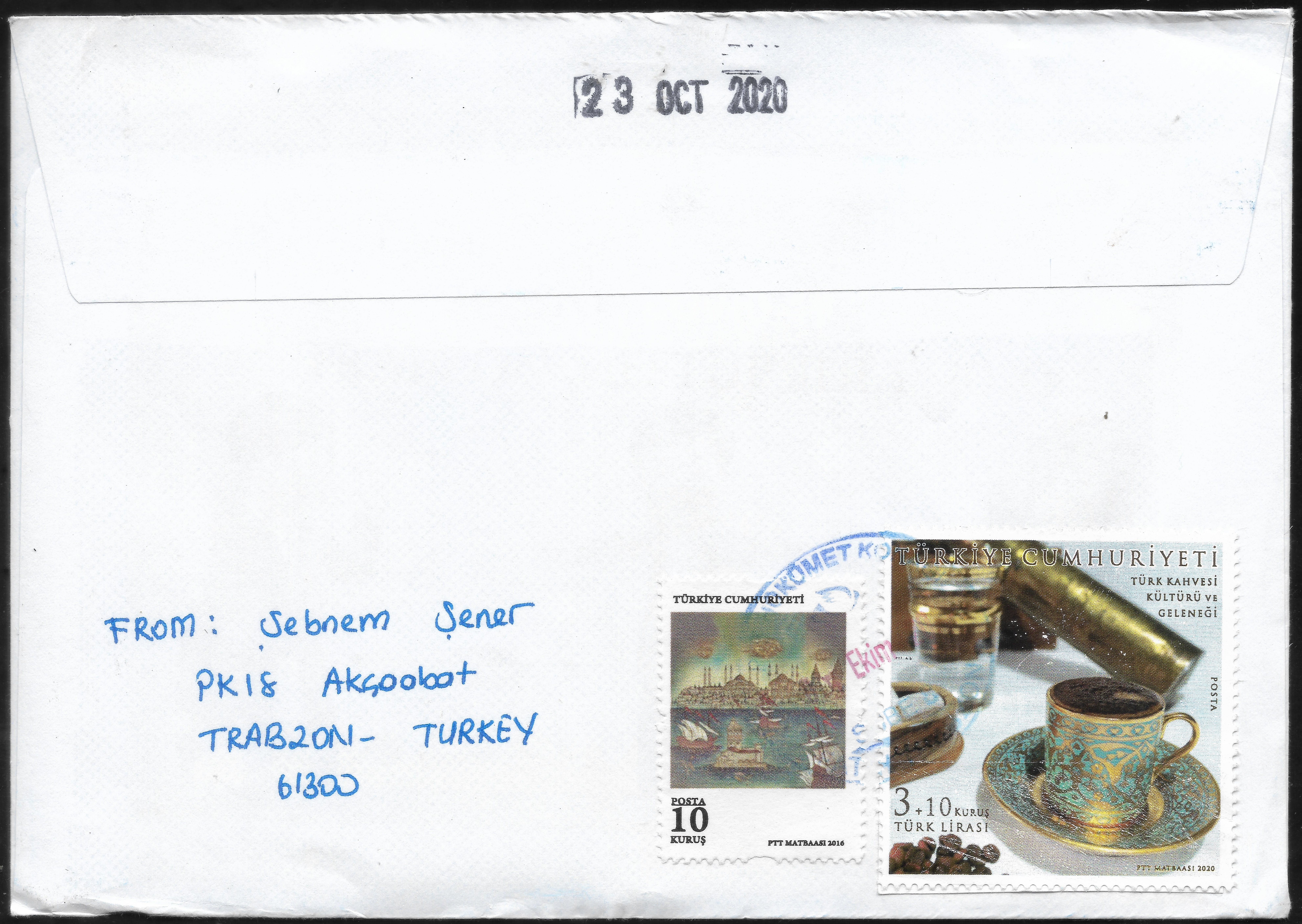 I soon received several requests seeking permission to use “Mask Man” on personalized stamps from several countries. On the two that I have been “issued” so far, my complete design was kept including the legends and colors.  Only one of the two I sent to collectors in Turkey has since been printed (the other included a Turkish flag, different legend and background color). The organizer of that personalized stamp sent me a cover (seen above) and a mint single. (For a look at the postcard she enclosed as a stiffener, please have a look at the first installment of “A Postcard A Day”).

I have only just received a cover of the stamp from Canada (cover below). I kept the same basic design but in order to “lift” the character’s hands to hold the Maple Leaf flag from Canada as well as the tongs, I had to “break” his arms and ended up putting them backwards. I later corrected this but I believe the Canadian version of “Mask Man” still has the reversed arms. 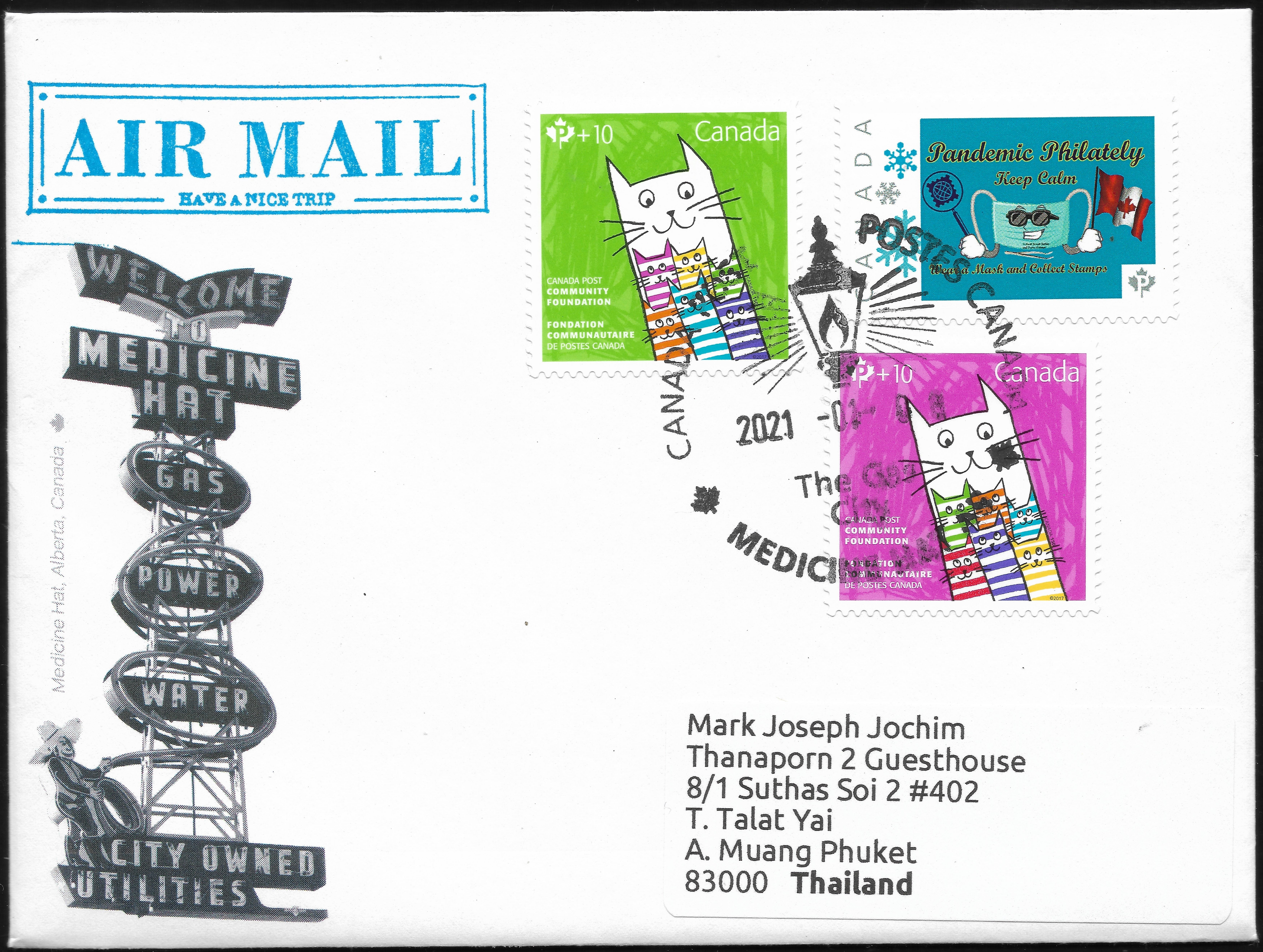 I hope you like these.  I have had a long love-hate relationship with personalized stamps, even those produced by legitimate postal administrations, and feel they should be treated similarly to most local post items (which I have created off-and-on for nearly seven years) in that they tend fall outside the realm of “traditional philately”. Perhaps we just need a new branch of philately devoted to such items much like those recognized by the Fédération Internationale de Philatélie (FIP) which include maximaphily (maximum cards), aerophilately (study of airmail) or astrophilately (related to spaceflight). Personalphily, anyone?