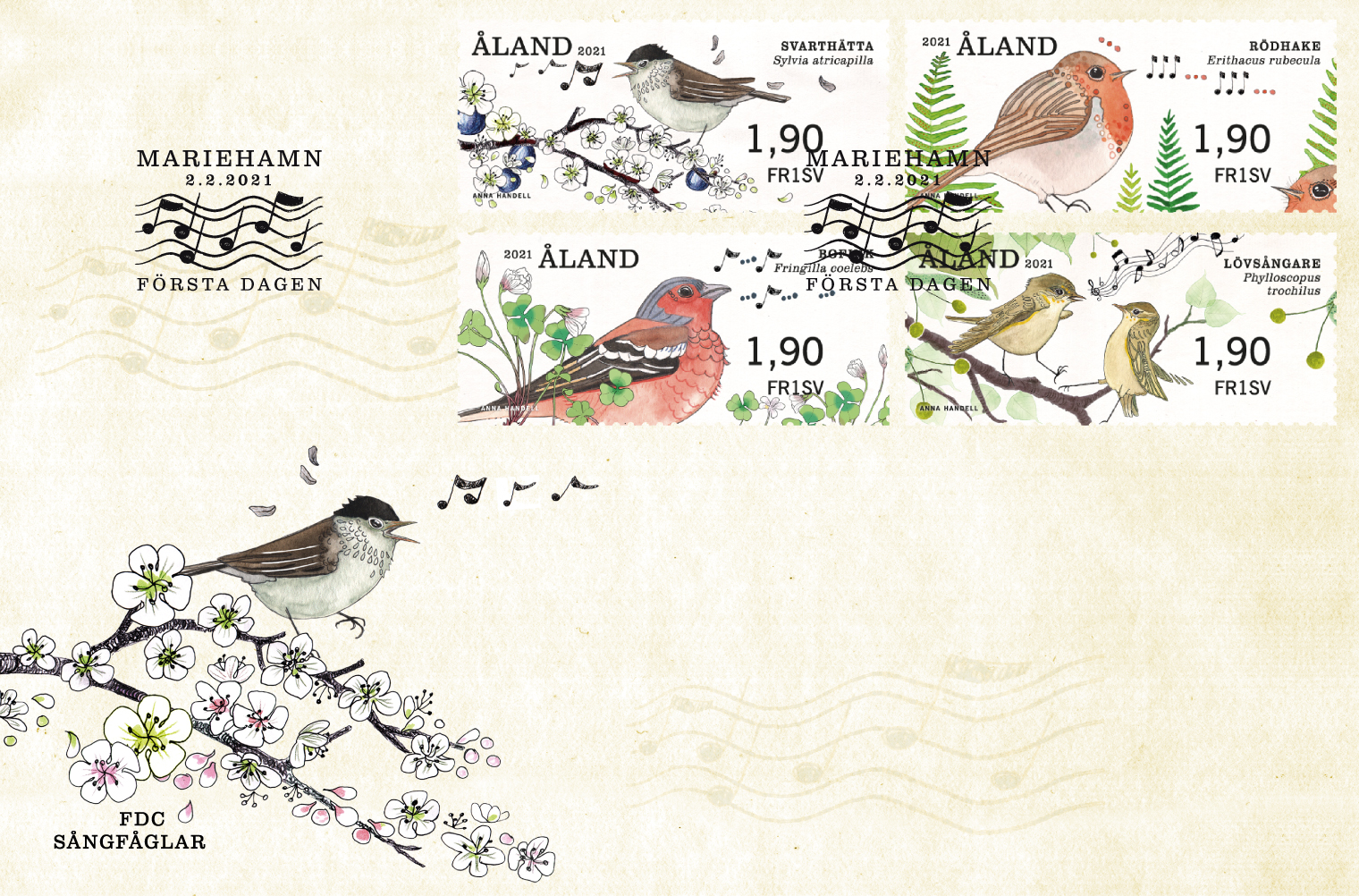 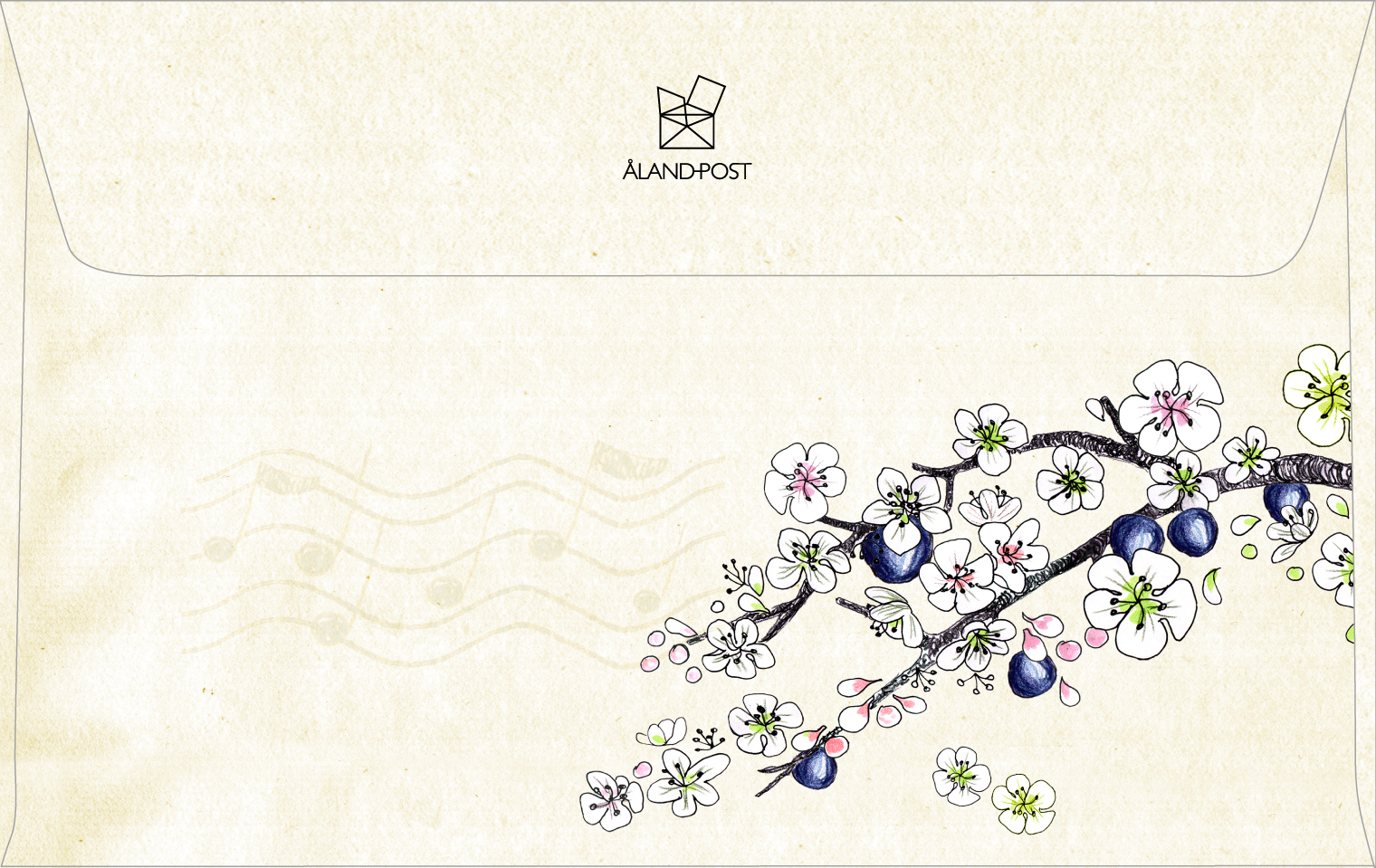 The Åland franking labels are Anna Handell’s first postal labels and, as a bird lover, the theme suited her perfectly. The robin was her favourite.

“I loved giving the four bird species each their own life and personality. I wanted to create explicit and easily accessible motifs, tailored to the habitat of each bird species, but also offer the attentive viewer tiny and entertaining details. The robin is a seemingly amiable bird with a teeny-tiny beak and stick-like legs. It has such a vigorous personality, I think.”

The European robin (Erithacus rubecula) may be recognized by its orange-red face and breast. Its crystal-clear chirping with unpredictable changes of pace is often heard from the treetops. On the label, it sits on the ground surrounded by common fern.

The willow warbler (Phylloscopus trochilus) is our most common bird species. The willow warbler is more heard than seen, seeing that it prefers low bramble where it can stay hidden. It is a small, quick and greenish-grey bird with a soft, melancholy sounding song.

The common chaffinch (Fringilla coelebs) is our second most common bird species which, unlike the willow warbler, has a powerful rhythmic song with a trill at the end. The chaffinch is recognized by its two contrasting white wing bars. In the motif, it has landed in a sea of wood sorrel.

The Eurasian blackcap (Sylvia atricapilla) also hides in the brambles and shrubs. The male has the black cap and his song starts low-key to end in a loud high-pitched crescendo. Sometimes, it is heard mocking other birds. 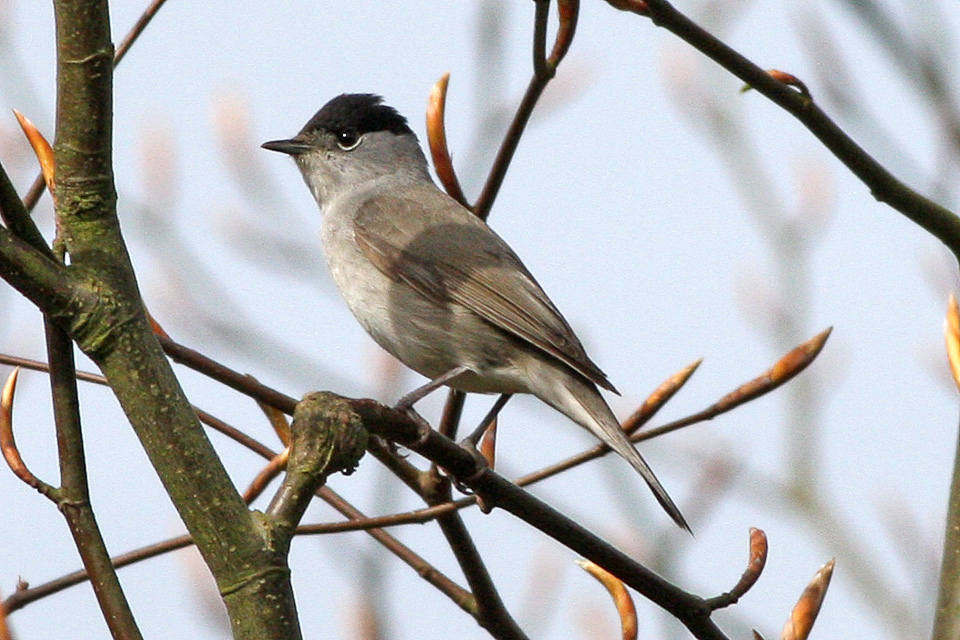 The Eurasian blackcap (Sylvia atricapilla) usually known simply as the blackcap, is a common and widespread typical warbler. It has mainly olive-grey upperparts and pale grey underparts, and differences between the five subspecies are small. Both sexes have a neat coloured cap to the head, black in the male and reddish-brown in the female. The male’s typical song is a rich musical warbling, often ending in a loud high-pitched crescendo, but a simpler song is given in some isolated areas, such as valleys in the Alps. The blackcap’s closest relative is the garden warbler, which looks quite different but has a similar song.

The blackcap breeds in much of Europe, western Asia and northwestern Africa, and its preferred habitat is mature deciduous woodland. The male holds a territory when breeding, which is defended against garden warblers as well as other blackcaps. The nest is a neat cup, built low in brambles or scrub, and the clutch is typically 4–6 mainly buff eggs, which hatch in about 11 days. The chicks fledge in 11–12 days, but are cared for by both adults for some time after leaving the nest. The blackcap is a partial migrant; birds from the colder areas of its range winter in scrub or trees in northwestern Europe, around the Mediterranean and in tropical Africa. Some German birds have adapted to spending the winter in gardens in Great Britain and Ireland. Insects are the main food in the breeding season, but, for the rest of the year, blackcaps survive primarily on small fruit. Garden birds also eat bread, fat and peanuts in winter.

Despite extensive hunting in Mediterranean countries and the natural hazards of predation and disease, the blackcap has been extending its range for several decades, and is classified by the International Union for Conservation of Nature as least concern. Its rich and varied song has led to it being described as the “mock nightingale” and it has featured in literature, films and music. In Messiaen’s opera Saint François d’Assise, the saint is represented by themes based on the blackcap’s song. 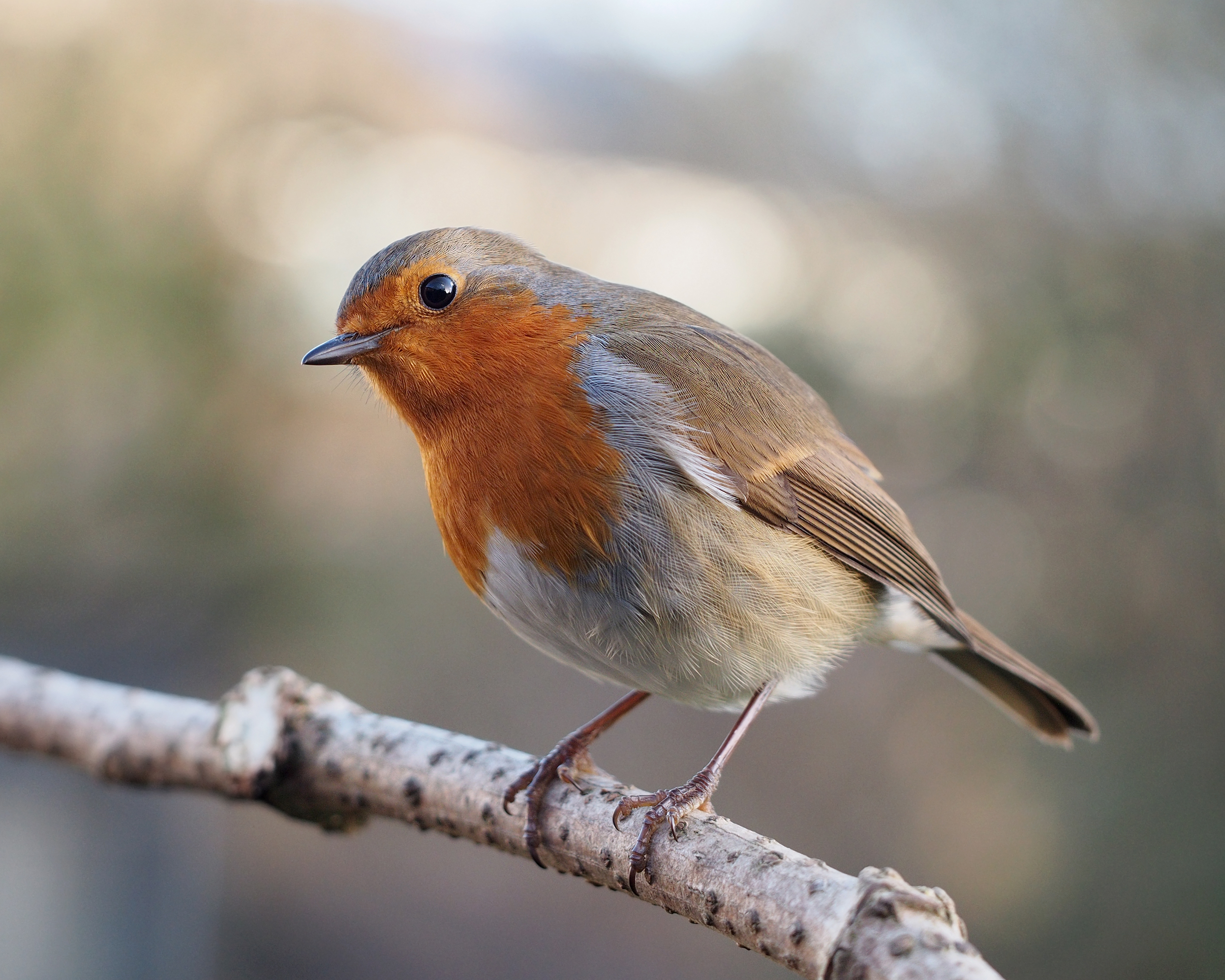 The European robin (Erithacus rubecula), known simply as the robin or robin redbreast in Ireland and Britain, is a small insectivorous passerine bird that belongs to the chat subfamily of the Old World flycatcher family. About 12.5–14.0 cm (5.0–5.5 inches) in length, the male and female are similar in coloration, with an orange breast and face lined with grey, brown upper-parts and a whitish belly. It is found across Europe, east to Western Siberia and south to North Africa; it is sedentary in most of its range except the far north.

The term robin is also applied to some birds in other families with red or orange breasts. These include the American robin (Turdus migratorius), a thrush, and the Australasian robins of the family Petroicidae, the relationships of which are unclear.

The robin produces a fluting, warbling during the breeding season. Both the male and female sing during the winter, when they hold separate territories, the song then sounding more plaintive than the summer version. The female robin moves a short distance from the summer nesting territory to a nearby area that is more suitable for winter feeding. The male robin keeps the same territory throughout the year. During the breeding season, male robins usually initiate their morning song an hour before civil sunrise, and usually terminate their daily singing around thirty minutes after sunset. Nocturnal singing can also occur, especially in urban areas that are artificially lit during the night. Under artificial light, nocturnal singing can be used by urban robins to actively shunt daytime anthropogenic noise. A variety of calls is also made at any time of year, including a ticking note indicating anxiety or mild alarm. 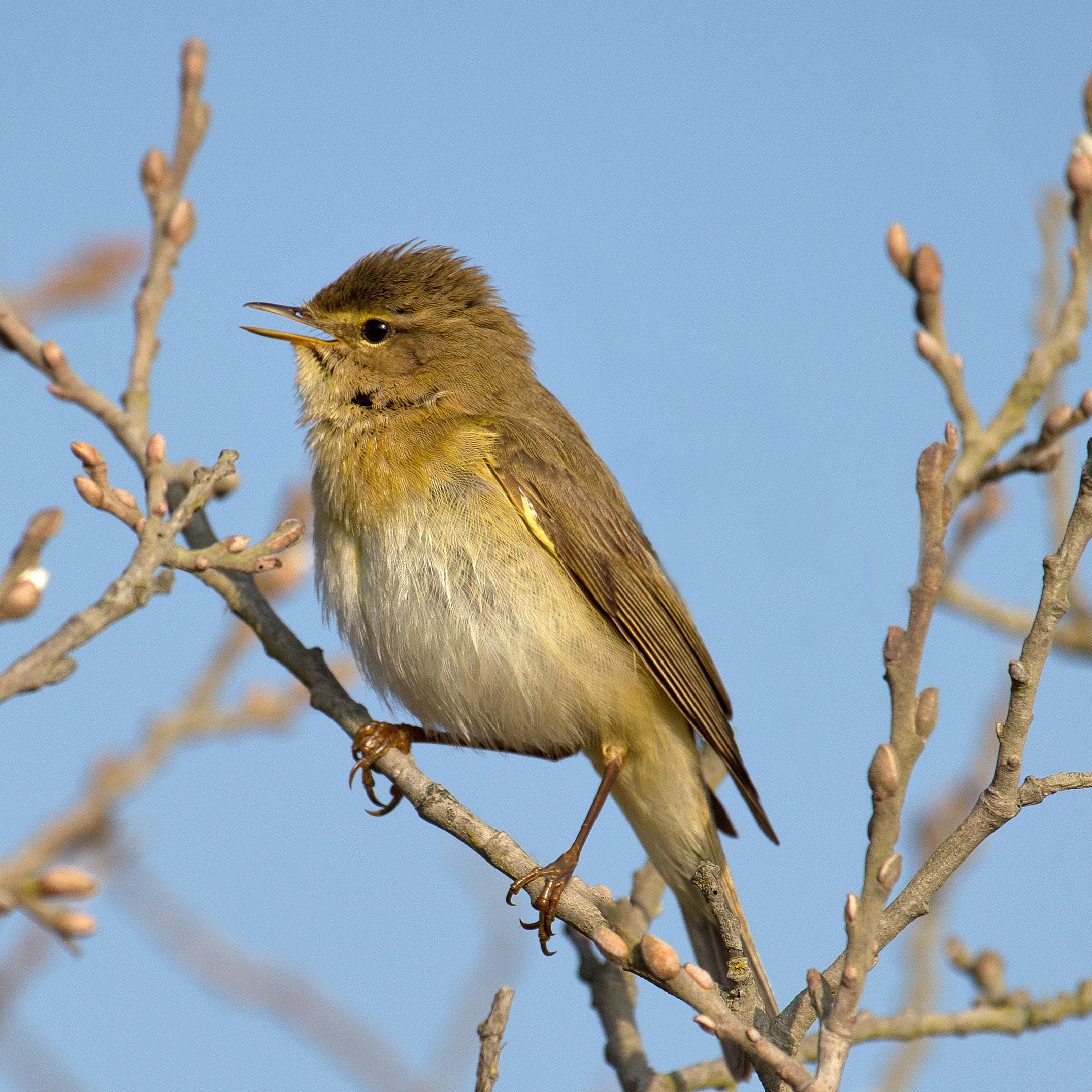 The willow warbler (Phylloscopus trochilus) is a very common and widespread leaf warbler which breeds throughout northern and temperate Europe and the Palearctic, from Ireland east to the Anadyr River basin in eastern Siberia. It is strongly migratory, with almost all of the population wintering in Sub-Saharan Africa.

It is a bird of open woodlands with trees and ground cover for nesting, including most importantly birch, alder, and willow habitats. The nest is usually built in close contact with the ground, often in low vegetation. Like most Old World warblers (Sylviidae), this small passerine is insectivorous. In northern Europe, it is one of the first warblers to return in the spring though is later than the closely related chiffchaff.

It is a typical leaf warbler in appearance, 11–12.5 cm long and 7–15 g weight. It is greenish brown above and off-white to yellowish below; the wings are plain greenish-brown with no wingbars. Juveniles are yellower below than adults. It is very similar to the chiffchaff, but non-singing birds can be distinguished from that species by their paler pinkish-yellow legs (dark brown to blackish in chiffchaff), longer paler bill, more elegant shape and longer primary projection (wingtip). Its song is a simple repetitive descending whistle, while the contact call is a disyllabic ‘hoo-eet‘, distinct from the more monosyllabic ‘hweet‘ of chiffchaffs. 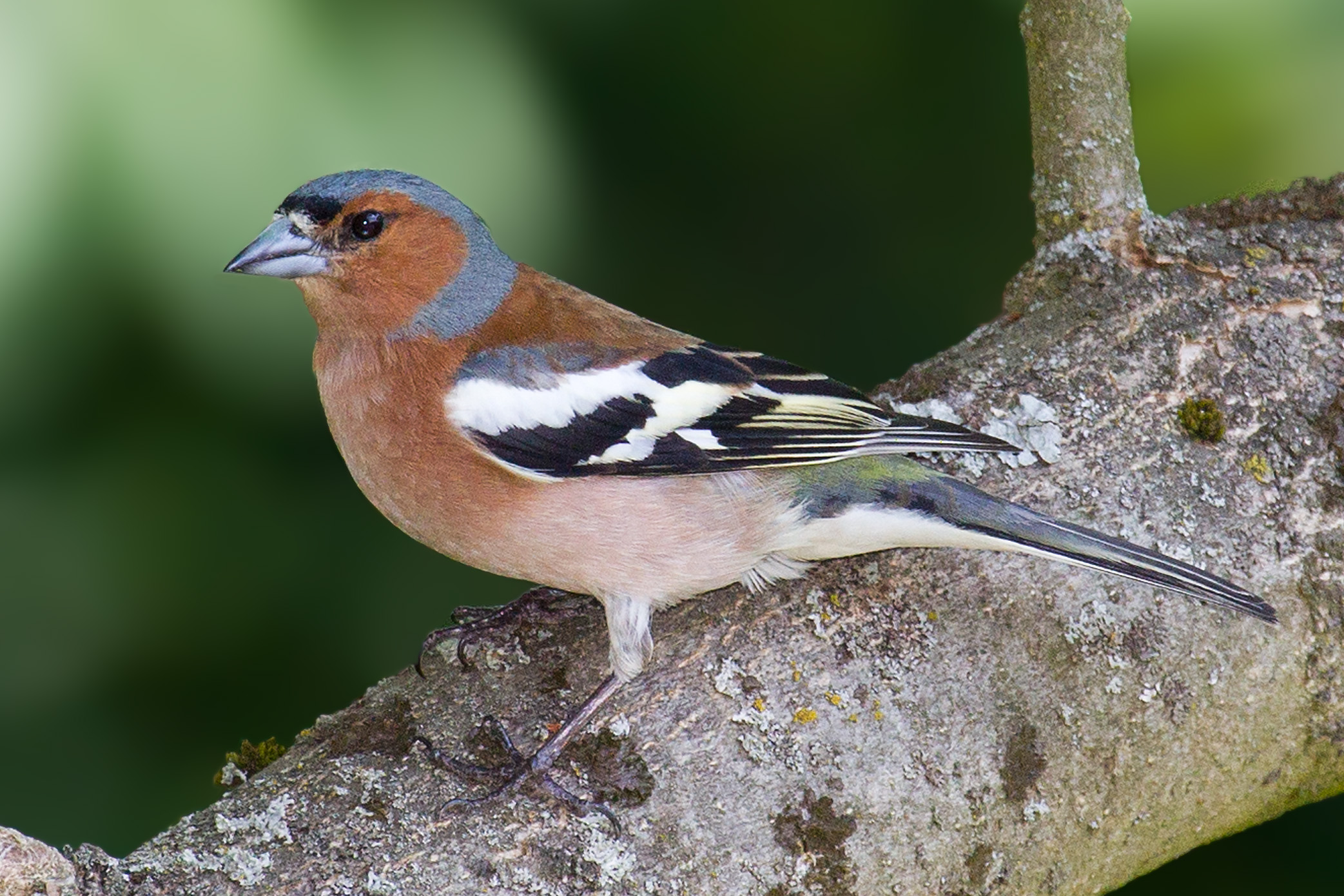 The common chaffinch or simply the chaffinch (Fringilla coelebs) is a common and widespread small passerine bird in the finch family. The male is brightly colored with a blue-grey cap and rust-red underparts. The female is much duller in coloring, but both sexes have two contrasting white wing bars and white sides to the tail. The male bird has a strong voice and sings from exposed perches to attract a mate.

The chaffinch breeds in much of Europe, across the Palearctic to Siberia and in northwestern Africa. The female builds a nest with a deep cup in the fork of a tree. The clutch is typically four or five eggs, which hatch in about 13 days. The chicks fledge in around 14 days, but are fed by both adults for several weeks after leaving the nest. Outside the breeding season, chaffinches form flocks in open countryside and forage for seeds on the ground. During the breeding season, they forage on trees for invertebrates, especially caterpillars, and feed these to their young. They are partial migrants; birds breeding in warmer regions are sedentary, while those breeding in the colder northern areas of their range winter further south.

The eggs and nestlings of the chaffinch are taken by a variety of mammalian and avian predators. Its large numbers and huge range mean that chaffinches are classed as of least concern by the International Union for Conservation of Nature.

The acquisition by the young common chaffinch of its song was the subject of an influential study by British ethologist William Thorpe. Thorpe determined that if the young common chaffinch is not exposed to the adult male’s song during a certain critical period after hatching, it will never properly learn the song. He also found that in adult common chaffinches, castration eliminates the song, but injection of testosterone induces such birds to sing even in November, when they are normally silent.