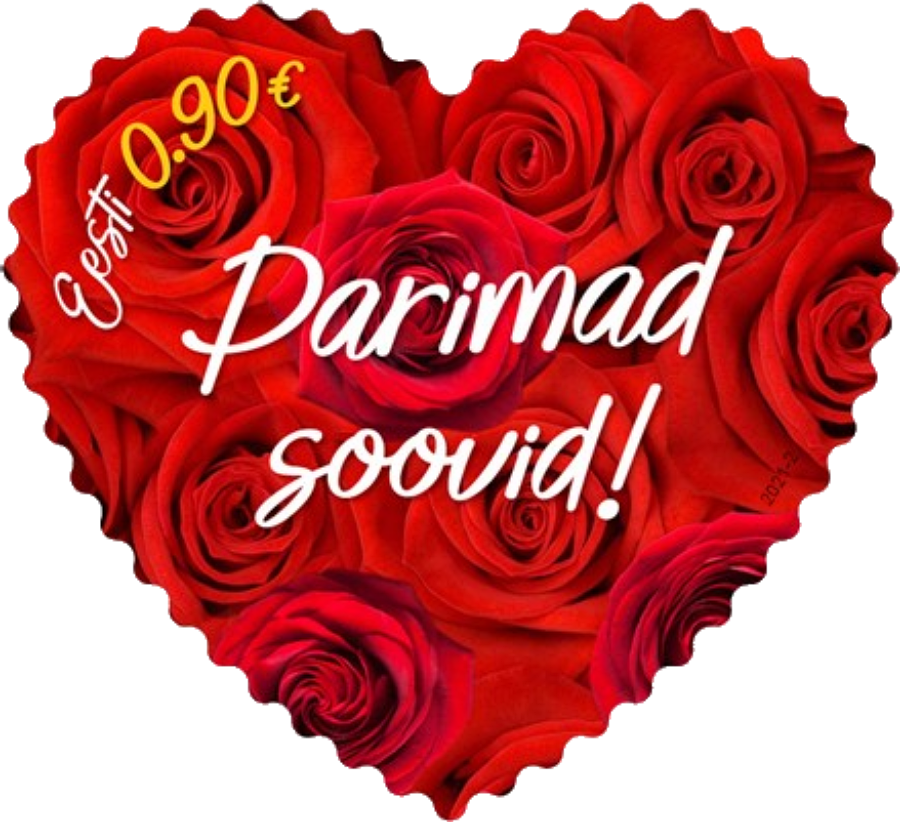 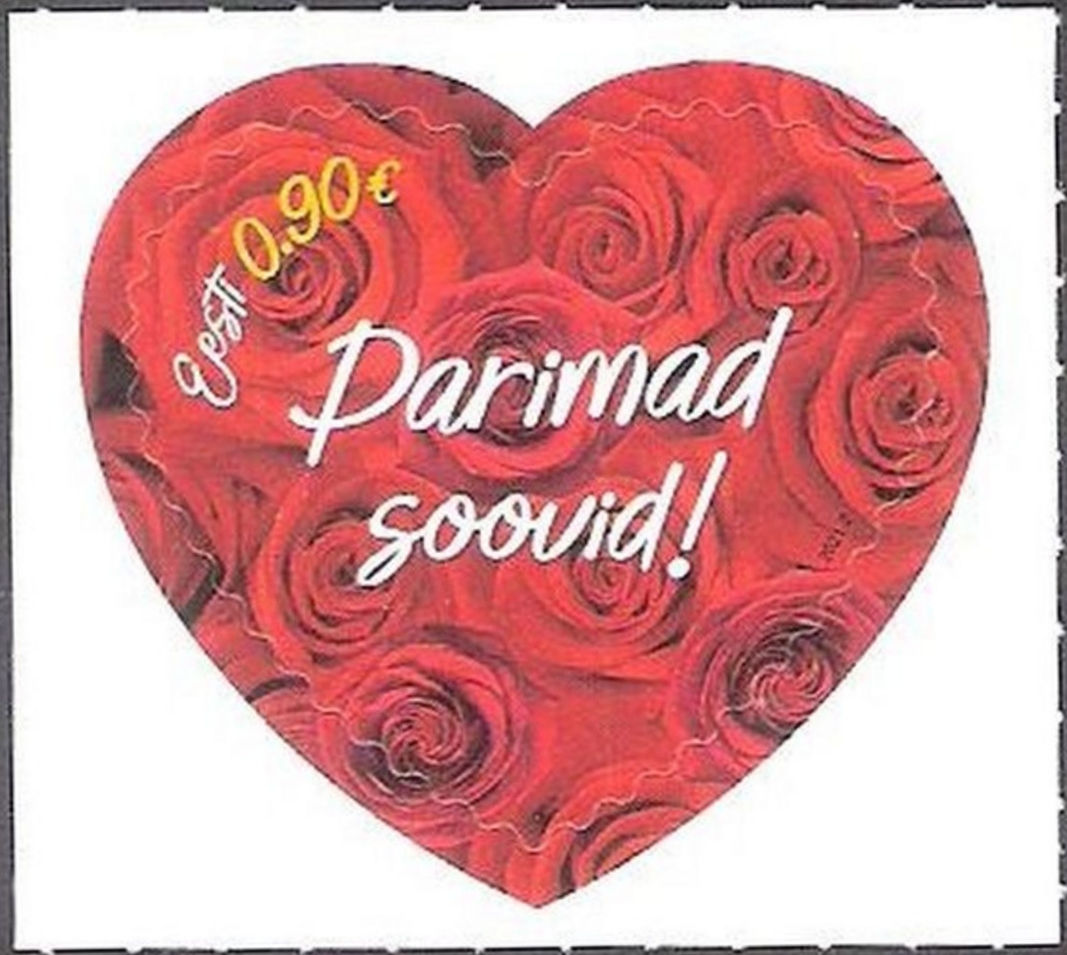 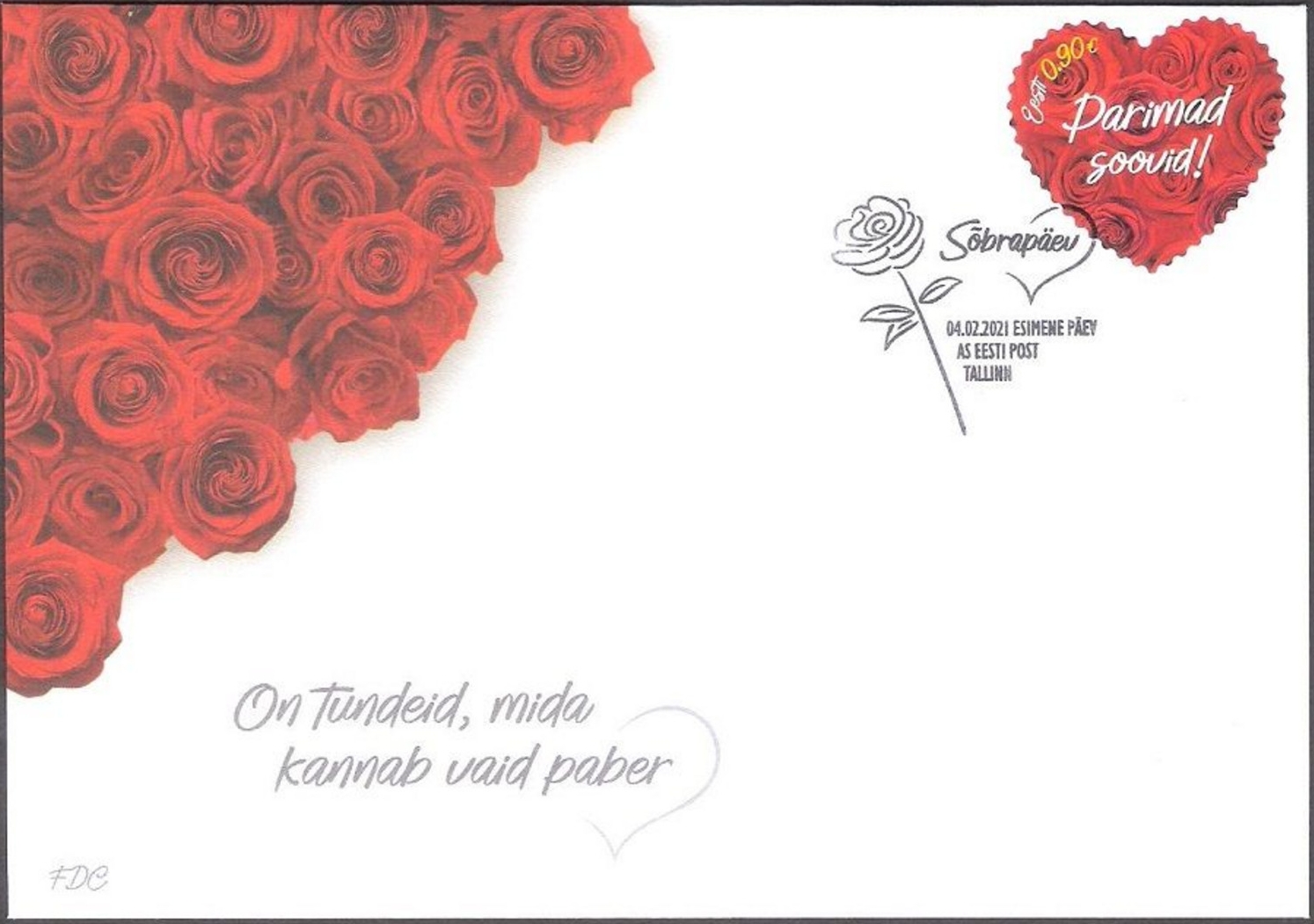 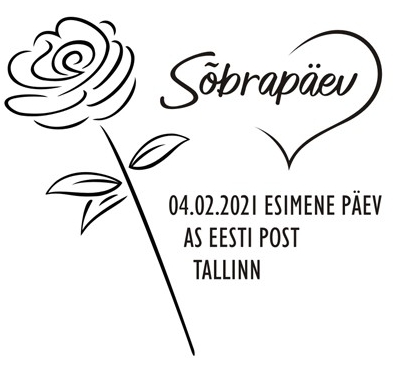 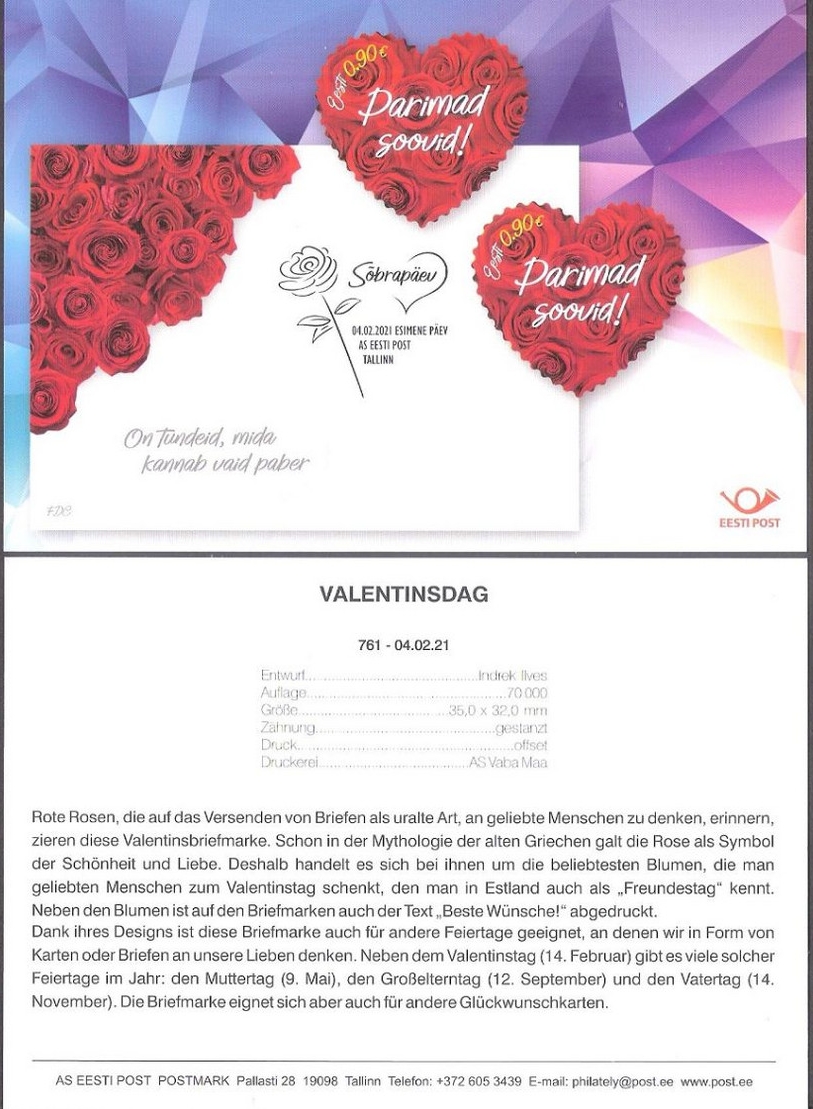 Red roses are depicted in the Valentine’s Day stamp design, which refers to sending letters as a traditional way to remember our loved ones. Roses were considered a symbol of beauty and love in Ancient Greece. Therefore, they are one of the most popular flowers to be gifted to loved ones on Valentine’s Day. In addition to the flowers, the writing on the stamp says “Parimad soovid!” /Best wishes/.

Thanks to its design, the stamp can also be used for other celebrations, when you decide to surprise your friends or family with a letter or a postcard. There are several such days a year in addition to Valentine’s Day (14 February): Mothers’ Day (9 May), Grandparents’ Day (12 September) and Fathers’ Day (14 November), but the stamp is also ideal for any other greeting card.

Numerous early Christian martyrs were named Valentine. The Valentines honored on February 14 are Valentine of Rome (Valentinus presb. m. Romae) and Valentine of Terni (Valentinus ep. Interamnensis m. Romae). Valentine of Rome was a priest in Rome who was martyred in 269 and was added to the calendar of saints by Pope Gelasius I in 496 and was buried on the Via Flaminia. The relics of Saint Valentine were kept in the Church and Catacombs of San Valentino in Rome, which “remained an important pilgrim site throughout the Middle Ages until the relics of St. Valentine were transferred to the church of Santa Prassede during the pontificate of Nicholas IV”. The flower-crowned skull of Saint Valentine is exhibited in the Basilica of Santa Maria in Cosmedin, Rome. Other relics are found at Whitefriar Street Carmelite Church in Dublin, Ireland.

Valentine of Terni became bishop of Interamna (now Terni, in central Italy) and is said to have been martyred during the persecution under Emperor Aurelian in 273. He is buried on the Via Flaminia, but in a different location from Valentine of Rome. His relics are at the Basilica of Saint Valentine in Terni (Basilica di San Valentino). Professor Jack B. Oruch of the University of Kansas notes that “abstracts of the acts of the two saints were in nearly every church and monastery of Europe.” The Catholic Encyclopedia also speaks of a third saint named Valentine who was mentioned in early martyrologies under date of February 14. He was martyred in Africa with a number of companions, but nothing more is known about him. A relic claimed to be Saint Valentine of Terni’s head was preserved in the abbey of New Minster, Winchester, and venerated.

The feast day is still celebrated in Balzan (Malta) where relics of the saint are claimed to be found, and also throughout the world by Traditionalist Catholics who follow the older, pre-Second Vatican Council calendar.

While the European folk traditions connected with Saint Valentine and St. Valentine’s Day have become marginalized by the modern Anglo-American customs connecting the day with romantic love, there are some remaining associations connecting the saint with the advent of spring.

While the custom of sending cards, flowers, chocolates and other gifts originated in the UK, Valentine’s Day still remains connected with various regional customs in England. In Norfolk, a character called ‘Jack’ Valentine knocks on the rear door of houses leaving sweets and presents for children. Although he was leaving treats, many children were scared of this mystical person.

In Slovenia, Saint Valentine or Zdravko was one of the saints of spring, the saint of good health and the patron of beekeepers and pilgrims. A proverb says that “Saint Valentine brings the keys of roots”. Plants and flowers start to grow on this day. It has been celebrated as the day when the first work in the vineyards and in the fields commences. It is also said that birds propose to each other or marry on that day. Another proverb says “Valentin – prvi spomladin” (“Valentine – the first spring saint”), as in some places (especially White Carniola), Saint Valentine marks the beginning of spring. Valentine’s Day has only recently been celebrated as the day of love. The day of love was traditionally March 12, the Saint Gregory’s day, or February 22, Saint Vincent’s Day. The patron of love was Saint Anthony, whose day has been celebrated on June 13.

n 1797, a British publisher issued The Young Man’s Valentine Writer, which contained scores of suggested sentimental verses for the young lover unable to compose his own. Printers had already begun producing a limited number of cards with verses and sketches, called “mechanical valentines.” Paper Valentines became so popular in England in the early 19th century that they were assembled in factories. Fancy Valentines were made with real lace and ribbons, with paper lace introduced in the mid-19th century. In 1835, 60,000 Valentine cards were sent by post in the United Kingdom, despite postage being expensive.

A reduction in postal rates following Sir Rowland Hill’s postal reforms with the 1840 invention of the postage stamp (Penny Black) saw the number of Valentines posted increase, with 400,000 sent just one year after its invention, and ushered in the less personal but easier practice of mailing Valentines. That made it possible for the first time to exchange cards anonymously, which is taken as the reason for the sudden appearance of racy verse in an era otherwise prudishly Victorian. Production increased, “Cupid’s Manufactory” as Charles Dickens termed it, with over 3,000 women employed in manufacturing. The Laura Seddon Greeting Card Collection at Manchester Metropolitan University gathers 450 Valentine’s Day cards dating from early nineteenth century Britain, printed by the major publishers of the day. The collection appears in Seddon’s book Victorian Valentines (1996).

In the United States, the first mass-produced Valentines of embossed paper lace were produced and sold shortly after 1847 by Esther Howland of Worcester, Massachusetts. Her father operated a large book and stationery store, but Howland took her inspiration from an English Valentine she had received from a business associate of her father. Intrigued with the idea of making similar Valentines, Howland began her business by importing paper lace and floral decorations from England. A writer in Graham’s American Monthly observed in 1849, “Saint Valentine’s Day … is becoming, nay it has become, a national holyday.” The English practice of sending Valentine’s cards was established enough to feature as a plot device in Elizabeth Gaskell’s Mr. Harrison’s Confessions (1851): “I burst in with my explanations: ‘The valentine I know nothing about.’ ‘It is in your handwriting’, said he coldly.” Since 2001, the Greeting Card Association has been giving an annual “Esther Howland Award for a Greeting Card Visionary”.

Since the 19th century, handwritten notes have given way to mass-produced greeting cards. In the UK, just under half of the population spend money on their Valentines, and around £1.9 billion was spent in 2015 on cards, flowers, chocolates and other gifts. The mid-19th century Valentine’s Day trade was a harbinger of further commercialized holidays in the U.S. to follow.

In 1868, the British chocolate company Cadbury created Fancy Boxes – a decorated box of chocolates – in the shape of a heart for Valentine’s Day. Boxes of filled chocolates quickly became associated with the holiday. In the second half of the 20th century, the practice of exchanging cards was extended to all manner of gifts, such as giving jewelry.

The U.S. Greeting Card Association estimates that approximately 190 million valentines are sent each year in the US. Half of those valentines are given to family members other than husband or wife, usually to children. When the valentine-exchange cards made in school activities are included the figure goes up to 1 billion, and teachers become the people receiving the most valentines. The average valentine’s spending has increased every year in the U.S, from $108 a person in 2010 to $131 in 2013.

The rise of Internet popularity at the turn of the millennium is creating new traditions. Millions of people use, every year, digital means of creating and sending Valentine’s Day greeting messages such as e-cards, love coupons or printable greeting cards. An estimated 15 million e-valentines were sent in 2010. Valentine’s Day is considered by some to be a Hallmark holiday due to its commercialization.

In the modern era, liturgically, the Anglican Church has a service for St. Valentine’s Day (the Feast of St. Valentine), which includes the optional rite of the renewal of marriage vows. In 2016, Catholic Bishops of England and Wales established a novena prayer “to support single people seeking a spouse ahead of St Valentine’s Day.”

In Estonia, Valentine’s Day is called sõbrapäev which translates into “Friend’s Day”. As the name indicates, this day is more about remembering friends, not significant others.