Charlie Chaplin in “The Kid” 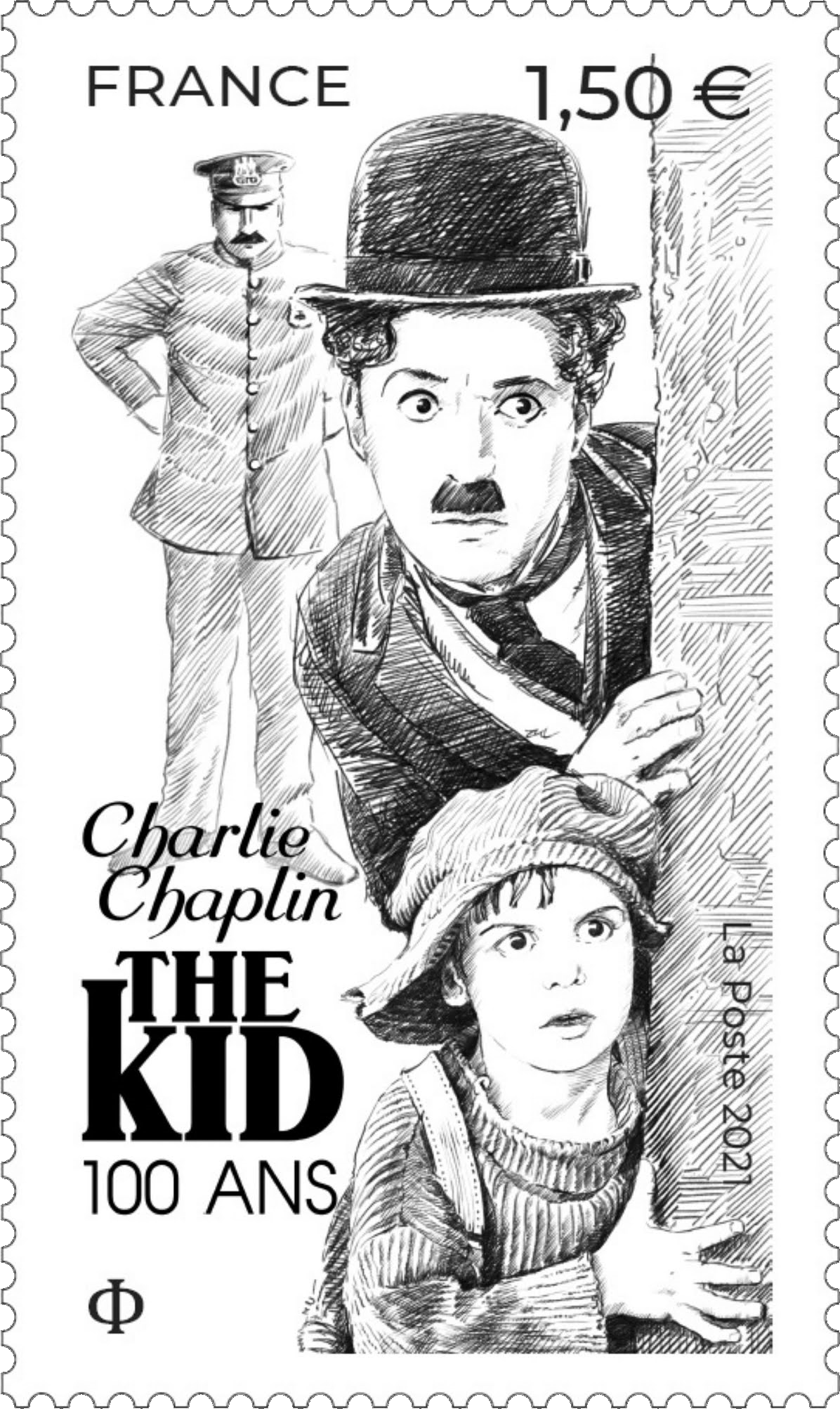 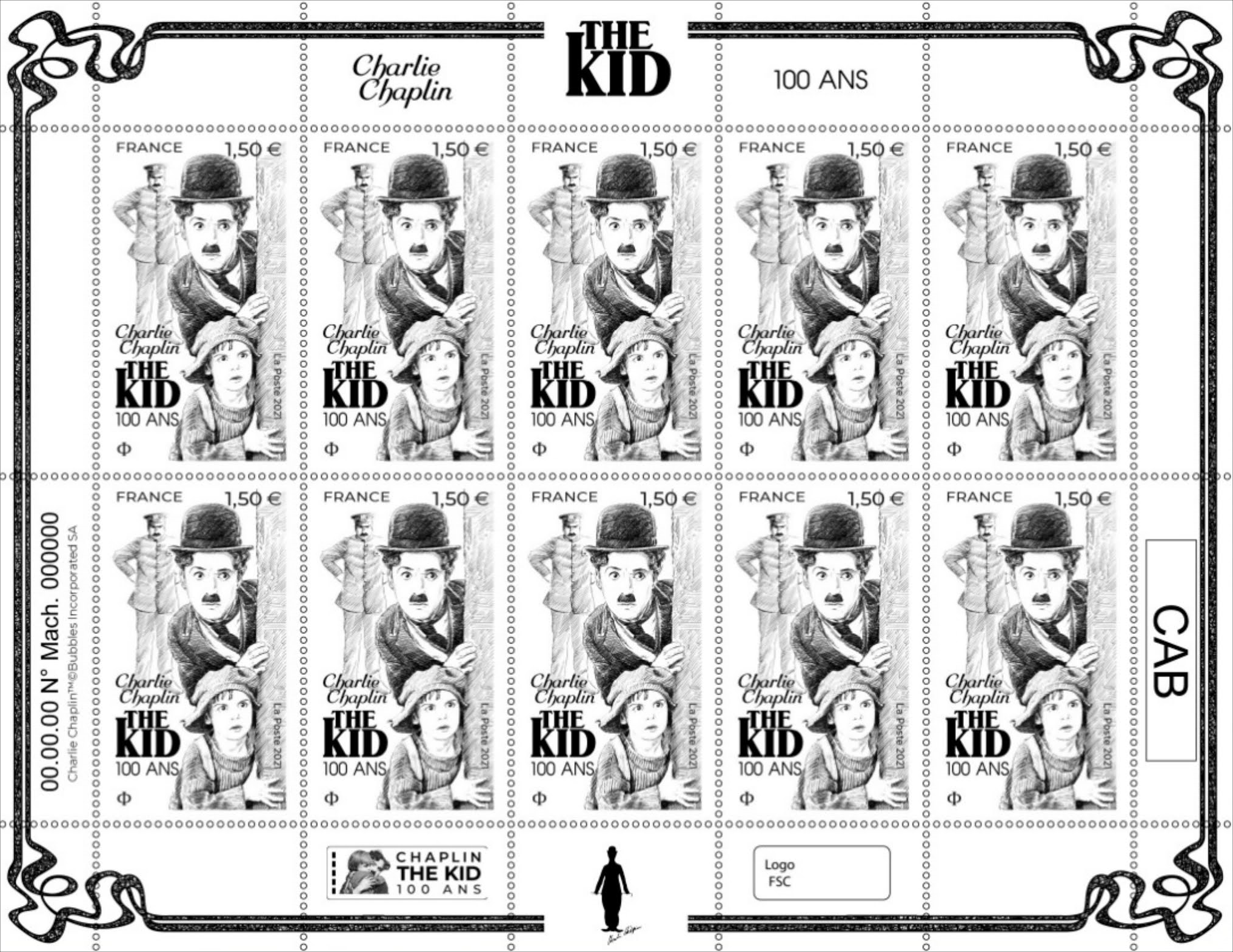 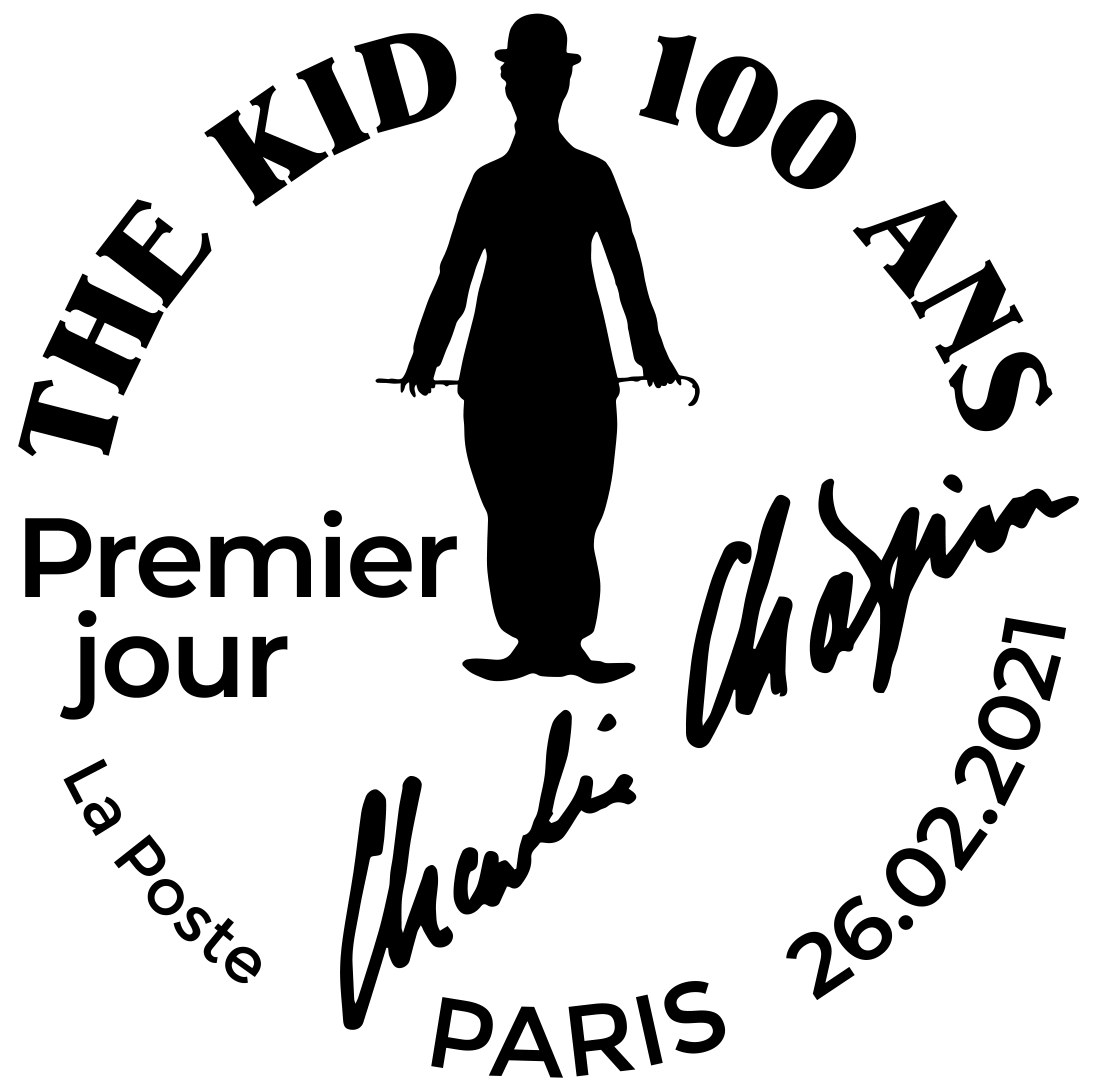 Press release
December 2020
Charlie Chaplin THE KID 100 YEARS OLD
On March 1, 2021, La Poste issues a stamp in tribute to Charlie CHAPLIN on the centenary of “THE KID”.

“The beauty I want to express doesn’t just embrace characteristics and material situations, but the genuine and fundamental emotions of humanity.» Charles Chaplin, 1921.

Charles Spencer Chaplin was born in London on April 16, 1889 to parents who were music hall artists. In failing health, his mother was left alone with Charlie and his half-brother and Chaplin lived most of his early childhood in institutions for destitute young people until he entered the world of music hall at nine. years.

Fifteen years later, star of a successful troupe, he left a tour of American vaudeville theaters to join the Keystone Film Company in Hollywood. In February 1914 he created the costume that would make him famous, and in less than a year Charlot took the path to unheard-of international fame and affection. A long film career is launched.

The Kid (1921), Chaplin’s first feature film, revisits not only the sets but also the difficulties of his childhood in London. He would later say, “At the orphanage, or when I wandered the streets looking for a piece of bread to survive, I kept imagining myself as the greatest actor in the world. I had to hold this exuberance that comes from complete self-confidence – otherwise defeat is certain.”

The Kid was perhaps the first film in the history of cinema to combine laughter and tears, comedy and drama. The exploits, but above all the complicity, of Charlot and the wonderful Jackie Coogan (only four years old when the shooting begins) still touch us, a hundred years later. In 1972, the honorary Oscar awarded to Charles Chaplin recognized his invaluable contribution to the transformation of cinema into the seventh art. 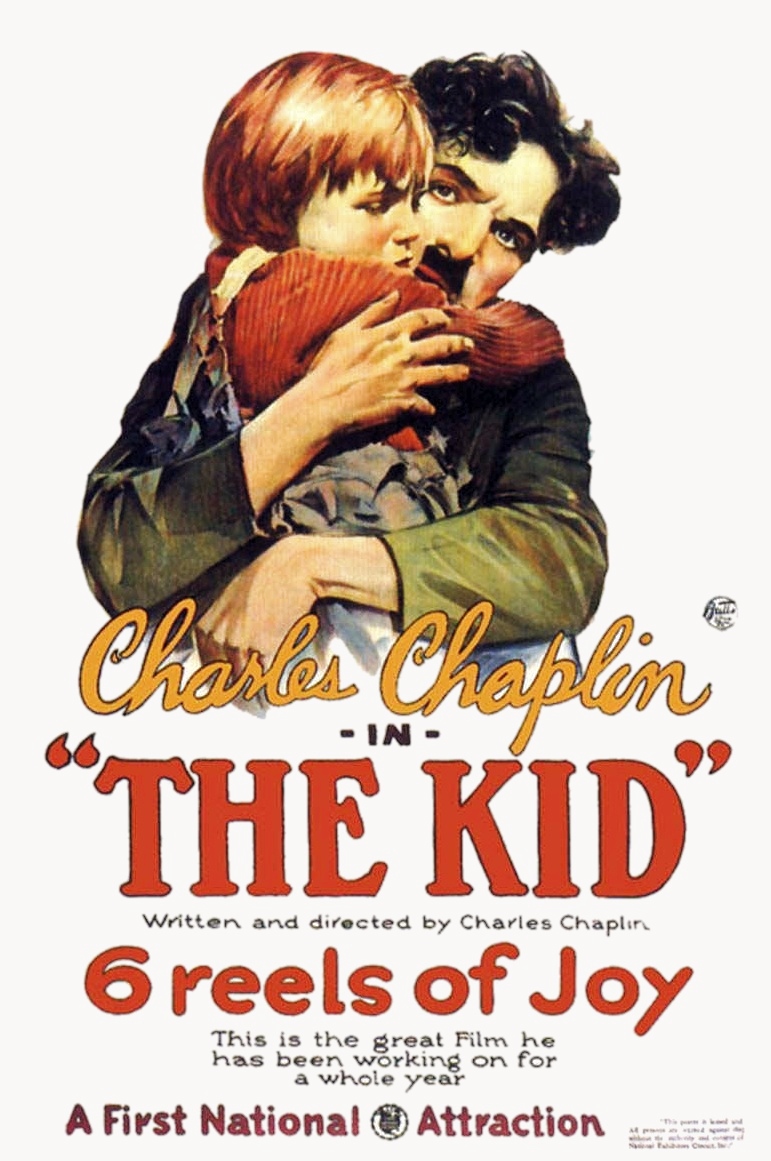 The Kid is a 1921 American silent comedy-drama film written, produced, directed and starring Charlie Chaplin, and features Jackie Coogan as his foundling baby, adopted son and sidekick. This was Chaplin’s first full-length film as a director (he had been a co-star in 1914’s Tillie’s Punctured Romance). It was a huge success, and was the second-highest-grossing film in 1921, behind The Four Horsemen of the Apocalypse. In 2011, The Kid was selected for preservation in the United States National Film Registry by the Library of Congress as being “culturally, historically, or aesthetically significant.”

An unmarried mother leaves a charity hospital with her newborn son; a short scene shows that the baby’s apparent artist father has lost interest in her. With much anguish the mother abandons the child, placing him in an expensive automobile with the handwritten note, “Please love and care for this orphan child”. Two thieves steal the car and leave the baby in an alley, where he is found by The Tramp. After some attempts to hand the child on to various passers-by, he finds the note and his heart melts. He takes the boy home, names him John and adjusts his household furniture for him. Meanwhile, the mother has a change of heart and returns for her baby but she learns that the car has been stolen and faints.

Five years pass. The Kid and the Tramp live in the same tiny room; they have little money but much love. They support themselves in a minor scheme: the Kid throws stones to break windows so that the Tramp, working as a glazier, can earn money repairing them. Meanwhile, the mother has become a wealthy actress and does charity by giving presents to poor children. By chance, as she does so, the mother and the Kid unknowingly cross paths.

The Kid later gets into a fight with another local boy as people in the area gather to watch the spectacle. The Kid wins, drawing the ire of the other boy’s older brother, who attacks the Tramp as a result. The Mother breaks up the fight, but it starts again after she leaves and the Tramp keeps beating the “Big Brother” over the head with a brick between swings until he totters away.

Shortly afterward, the Mother advises the Tramp to call a doctor after the Kid falls ill. The doctor discovers that the Tramp is not the Kid’s father and notifies authorities. Two men come to take the boy to an orphanage, but after a fight and a chase, the Tramp and the boy remain side by side. When the Mother comes back to see how the boy is doing she encounters the doctor, who shows her the note (which he had taken from the Tramp); she recognizes it as the one she left with her baby years ago.

Now fugitives, the Tramp and the boy spend the night in a flophouse. Its proprietor learns of a $1,000 reward offered by the authorities and takes the Kid to the police station, while the Tramp is asleep. As the tearful Mother is reunited with her long-lost child, the Tramp searches frantically for the missing boy. Unsuccessful, he returns to the doorway of their humble lodgings, where he falls asleep, entering a “Dreamland” where his neighbors have turned into angels and devils. A policeman awakes him and drives him off to a mansion. There the door is opened by the Mother and the Kid, who jumps into the Tramp’s arms, and he is welcomed in. 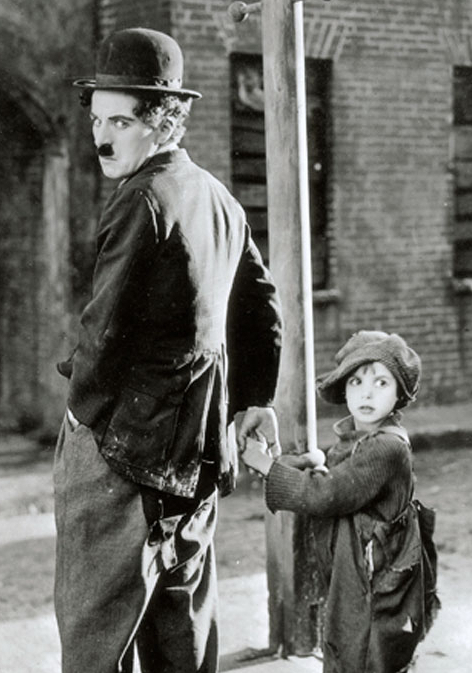 Chaplin wrote, produced, directed, edited, and starred in The Kid, and later composed a score. Innovative in its combination of comedic and dramatic elements, The Kid is widely considered one of the greatest films of the silent era. Chaplin biographer Jeffrey Vance maintains, “The film is a perfect blend of comedy and drama and is arguably Chaplin’s most personal and autobiographical work.”

The film made Coogan, then a vaudeville performer, into the first major child star of the movies. Many of the Chaplin biographers have attributed the relationship portrayed in the film to have resulted from the death of Chaplin’s firstborn infant son just ten days before the production began. The portrayal of poverty and the cruelty of welfare workers are also directly reminiscent of Chaplin’s own childhood in London. Several of the street scenes were filmed on Los Angeles’s Olvera Street, almost 10 years before it was converted into a Mexican-themed tourist attraction.

After production was completed in 1920, the film was caught up in the divorce actions of Chaplin’s first wife Mildred Harris, who sought to attach Chaplin’s assets. Chaplin and his associates smuggled the raw negative to Salt Lake City (reportedly packed in coffee cans) and edited the film in a room at the Hotel Utah. Before releasing the film Chaplin negotiated for and received an enhanced financial deal for the film with his distributor, First National Corporation, based on the success of the final film.

Twelve-year-old Lita Grey, who portrays an angel in the film, was Chaplin’s second wife from 1924 to 1927.

Chaplin removed scenes he believed too sentimental to modern audiences and composed and recorded a new musical score for the film’s theatrical reissue. Chaplin’s re-edited version of The Kid had its world premiere as the Film Society of Lincoln Center gala tribute to Chaplin held on April 4, 1972 at Philharmonic Hall, New York City, with Chaplin in attendance.

Chaplin and Coogan met for the last time in 1972, during Chaplin’s brief return to America to receive an honorary Academy Award for his lifetime contribution to cinema. 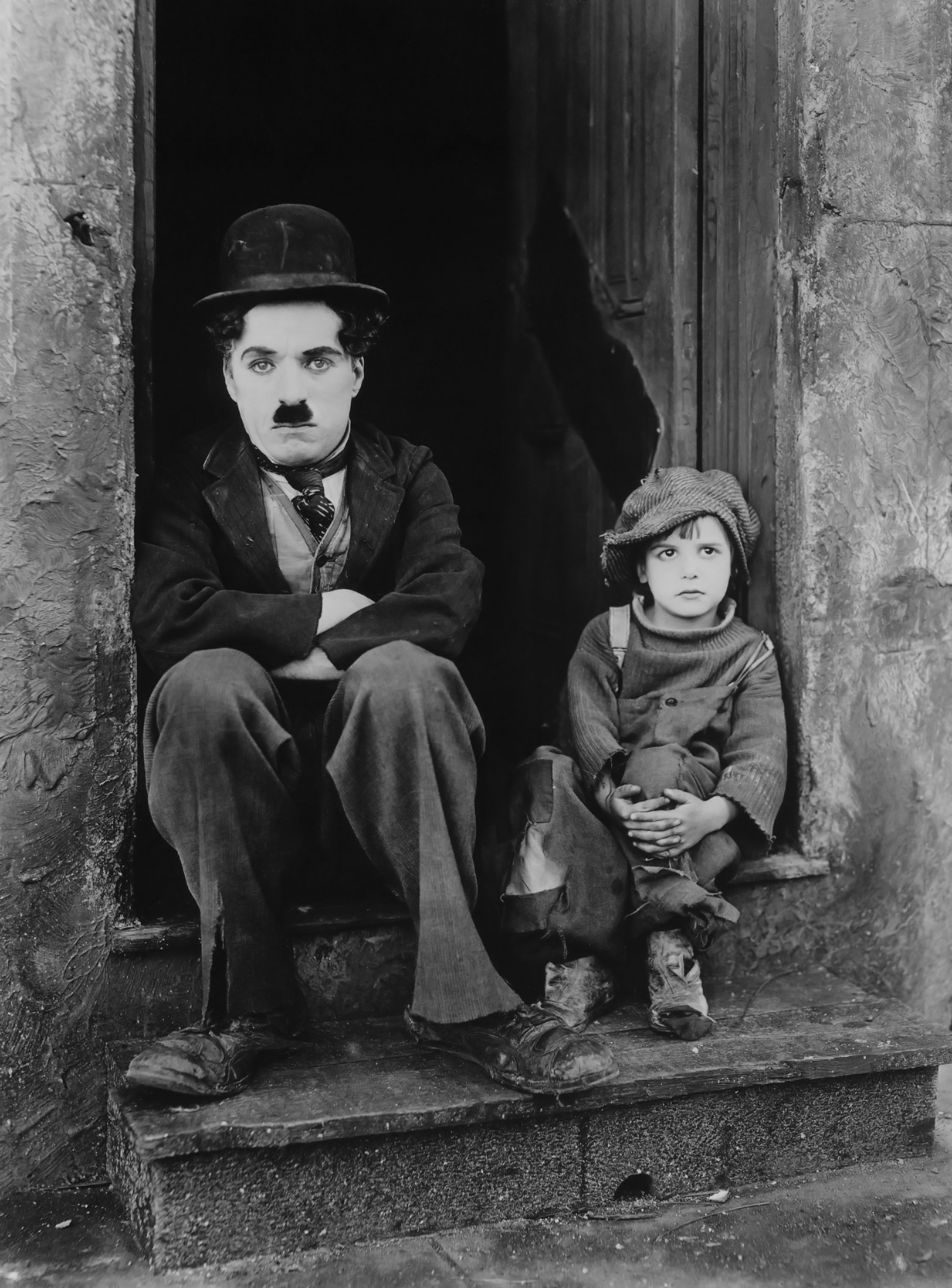 The Kid premiered on January 21, 1921 at Carnegie Hall in New York City as a benefit for the Children’s Fund of the National Board of Review of Motion Pictures.

The Kid was acclaimed by film critics upon its release.

A reviewer from Theatre Magazine glowingly wrote, “[Chaplin’s] new picture, The Kid, certainly outdoes in humor and the special brand of Chaplin pathos anything this popular film star has yet produced. There are almost as many tears as laughs in the new First National release – -which proves the contention that Chaplin as almost as good a tragedian as he is a comedian. The Kid may be counted as a screen masterpiece.”

Chaplin biographer Jeffrey Vance writes of the legacy of Chaplin’s The Kid: “The Kid remains an important contribution to the art of film, not only because of Chaplin’s innovative use of dramatic sequences within a feature-length comedy, but also because of the revelations The Kid provides about its creator. Undoubtedly, when Chaplin penned the preface to The Kid, “A picture with a smile–and perhaps, a tear,” he had his own artistic credo — and life — in mind.” Mary Pickford said of the film, “The Kid is one of the finest examples of the screen language, depending upon its actions rather than upon subtitles”.

In December 2011, The Kid was chosen to be preserved in the Library of Congress’ National Film Registry. The registry stated that the film is “an artful melding of touching drama, social commentary and inventive comedy” and praised Chaplin’s ability to “sustain his artistry beyond the length of his usual short subjects and could deftly elicit a variety of emotions from his audiences by skillfully blending slapstick and pathos.”