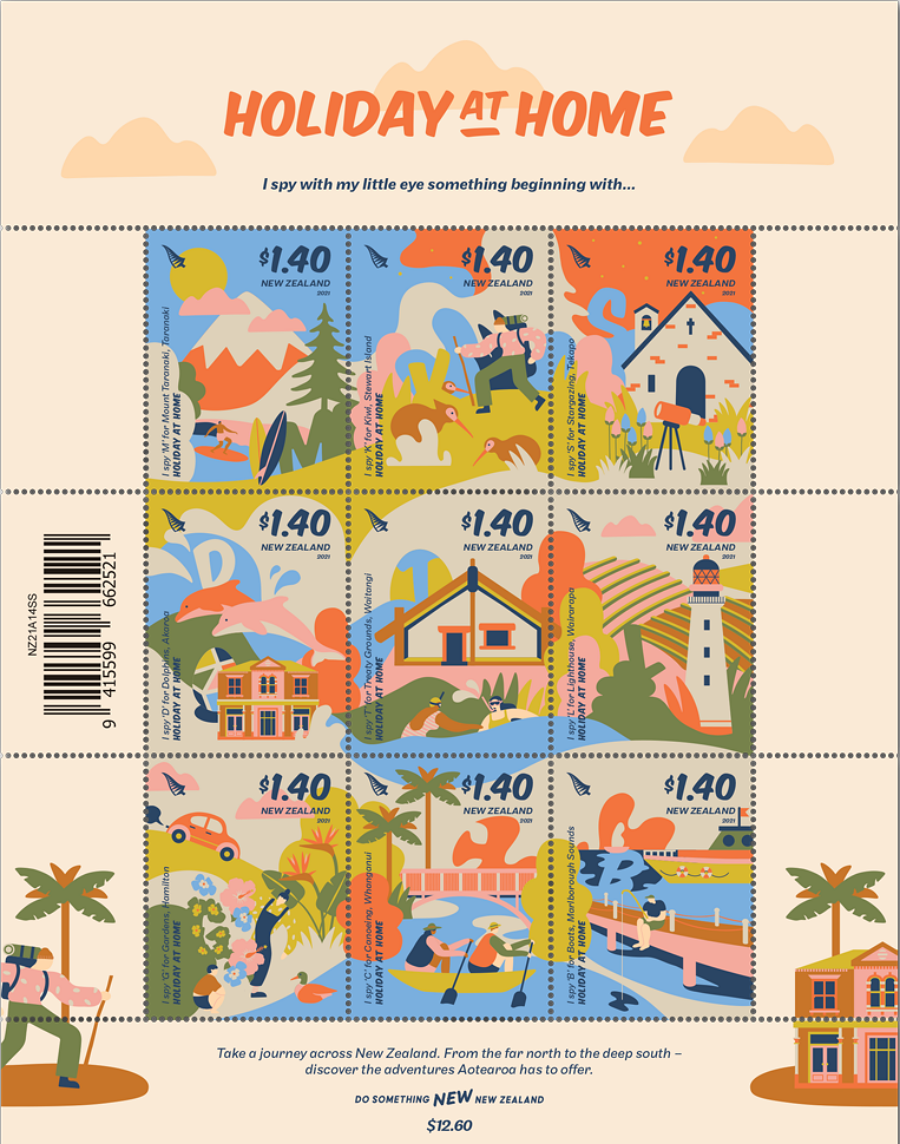 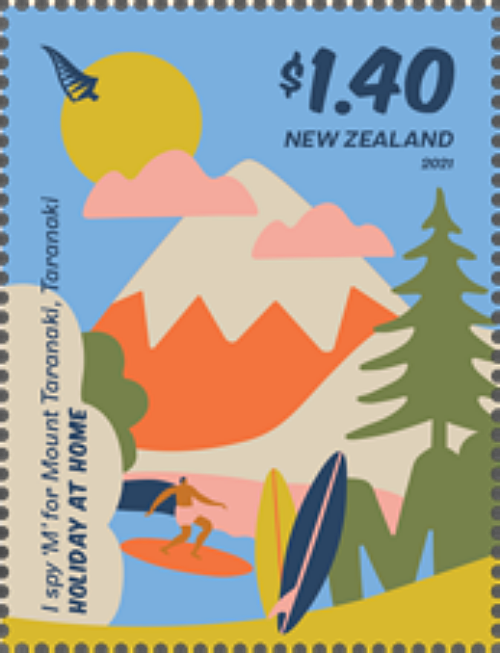 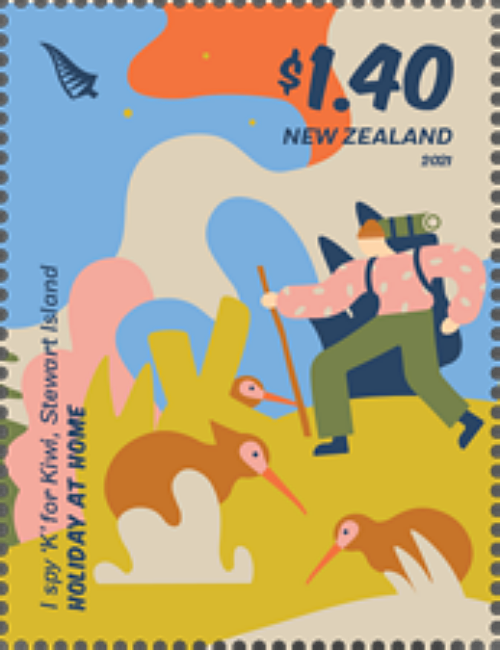 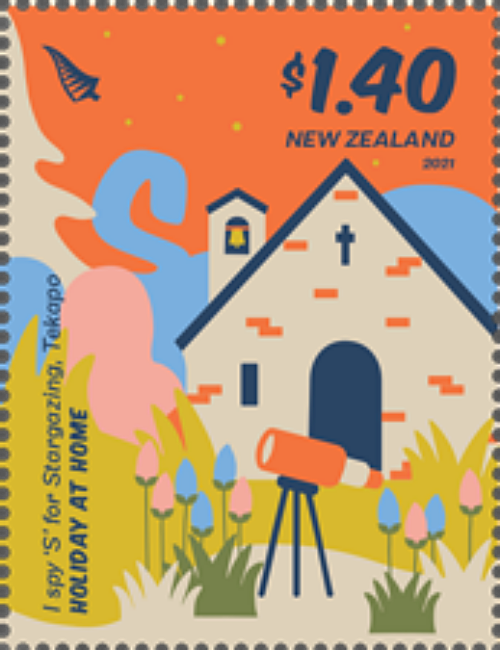 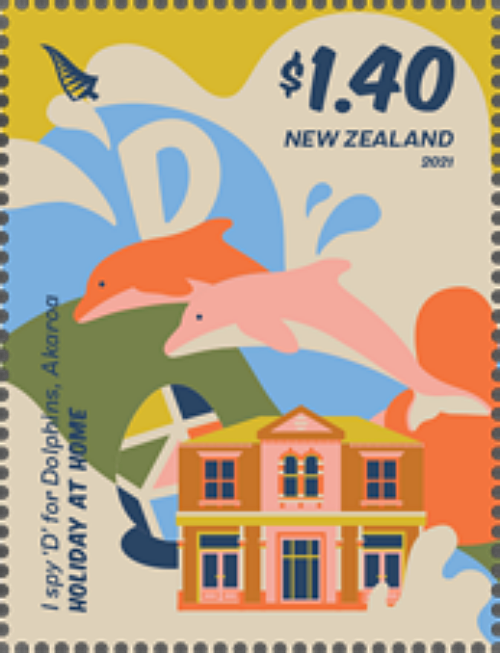 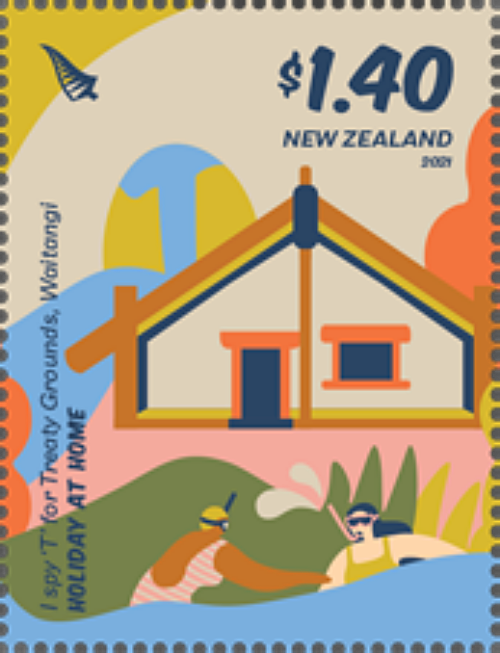 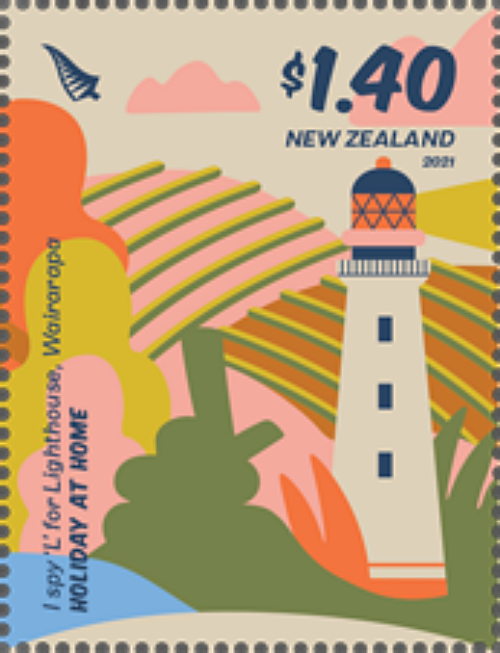 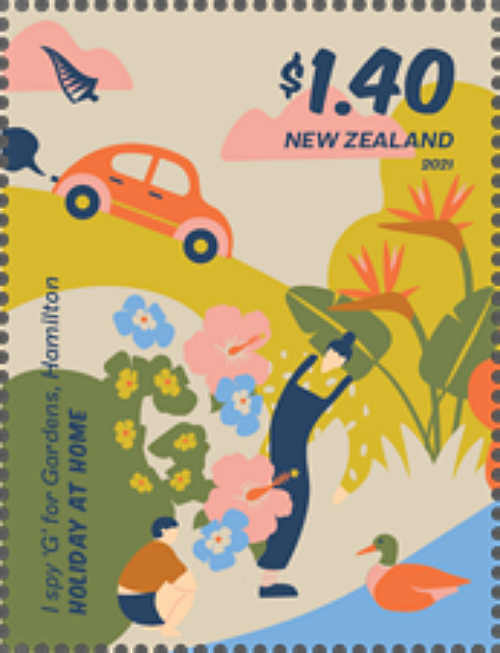 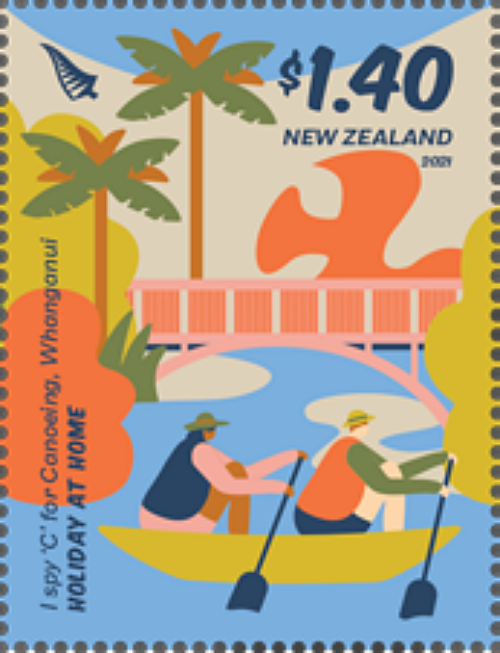 Design #9: I spy ‘B’ for Boats, Marlborough Sounds 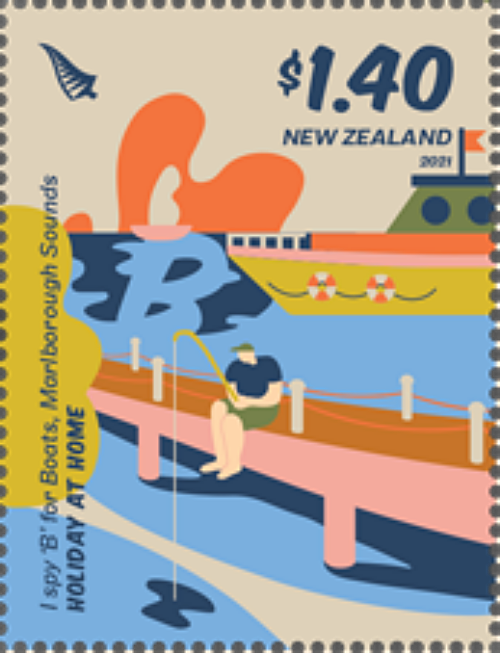 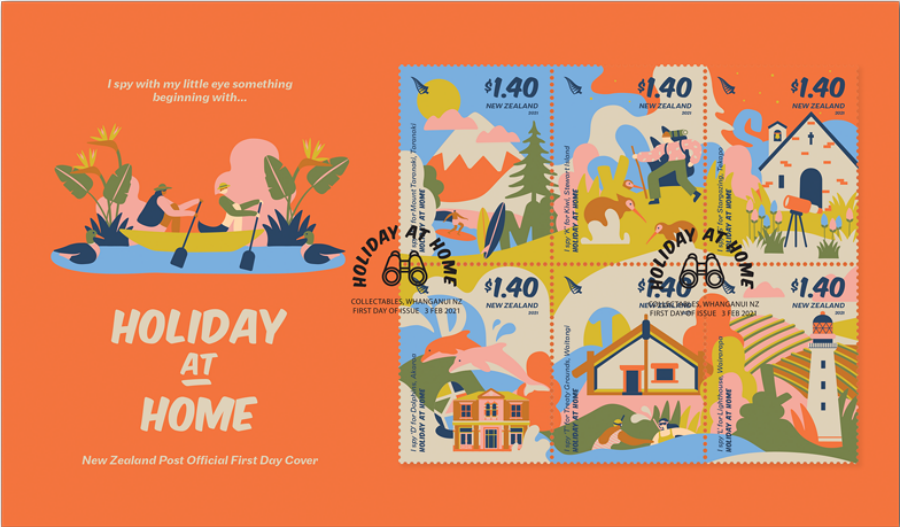 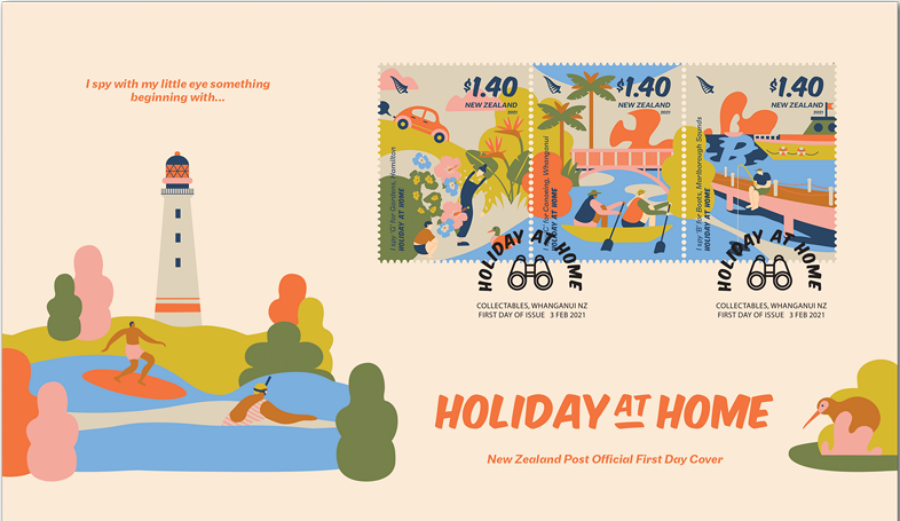 Take a journey across New Zealand with Holiday at Home. These delightful, retro-chic stamps highlight some of the sights and experiences Kiwis can enjoy in their own backyard.

Kiwis country wide are being encouraged to give domestic tourism a go and take the opportunity to discover something they’ve never seen before, be wowed by New Zealand’s spectacular natural wonders or simply find new ways to have fun.

With a play on the classic road trip game ‘I spy’, these nine charming stamps highlight some of the major holiday hotspots and hidden gems of Aotearoa New Zealand.

$1.40 I spy ‘M’ for Mount Taranaki, Taranaki – New Zealand’s contrasting landscapes and geological wonders are one of the best reasons to travel the length of the country. Mount Taranaki is a perfectly formed dormant volcano, pleasing to look at and New Zealand’s most frequently climbed peak.

$1.40 I spy ‘K’ for Kiwi, Stewart Island – Although we’re named after them, most New Zealanders have never seen a kiwi in the wild. Rakiura/ Stewart Island is one of the only places in Aotearoa where you can see these usually nocturnal birds in daylight.

$1.40 I spy ‘S’ for Stargazing, Tekapo – Lake Tekapo is well known as one of the best places in New Zealand to stargaze – you can get an even better look at the cosmos through the Mount John observatory telescope.

$1.40 I spy ‘D’ for Dolphins, Akaroa – Among other amazing sea life, Akaroa is where you can spot the world’s smallest and rarest dolphin – Hector’s dolphin.

$1.40 I spy ‘T’ for Treaty Grounds, Waitangi – New Zealand’s most important historic site is a must-see for all Kiwis, with enough to explore for one or two days. Including museums, a carving studio, the Treaty House, Te Whare Rūnanga (Carved Meeting House), traditional Māori waka taua (war canoes) and a full programme of tours and cultural performances.

$1.40 I spy ‘L’ for Lighthouse, Wairarapa – Several of New Zealand’s charming classic lighthouses can be viewed on various parts of the Wairarapa coastline.

$1.40 I spy ‘G’ for Gardens, Hamilton – The Waikato’s most popular tourist attraction is a collection of immaculately kept gardens that explore the history, context and meaning of gardens around the world.

$1.40 I spy ‘C’ for Canoeing, Whanganui – Float down New Zealand’s longest navigable river in a canoe or kayak and visit the Bridge to Nowhere.

From the Commonwealth Stamps Opinion blog, published on 29 January 2021:

🇳🇿 New Zealanders have effectively been trapped within the confines of the country for close to twelve months now with no real chance of escape due to the present pandemic rampaging through the world. They therefore have little choice but to holiday in New Zealand itself if they wish to take a vacation and New Zealand Post therefore intends to issue a sheetlet of 9 stamps on 3 February 2021 on the subject of Holiday at Home. The stamps were designed in what publicity describes as a retro-chic style which does not strike me as being particularly attractive and which seems to suggest, thinking also of the sheetlet issued last year depicting baking products, that this enforced period of isolation is driving New Zealand Post into a phase of projecting an idealised, comforting, sentimentalised mid-20th century lifestyle image on its stamps. Hence, perhaps, New Zealand Post’s decision to feature teddy bears on its COVID-19 stamp issue as opposed to featuring the faces of exhausted care workers as MaltaPost has just done on its 3 magnificent COVID-19 stamps (see Blog 1819).

The Holiday at Home issue was designed by YMC Design of Wellington and lithographed by Southern Colour Print and is perforated 14.5. Rating:- *.