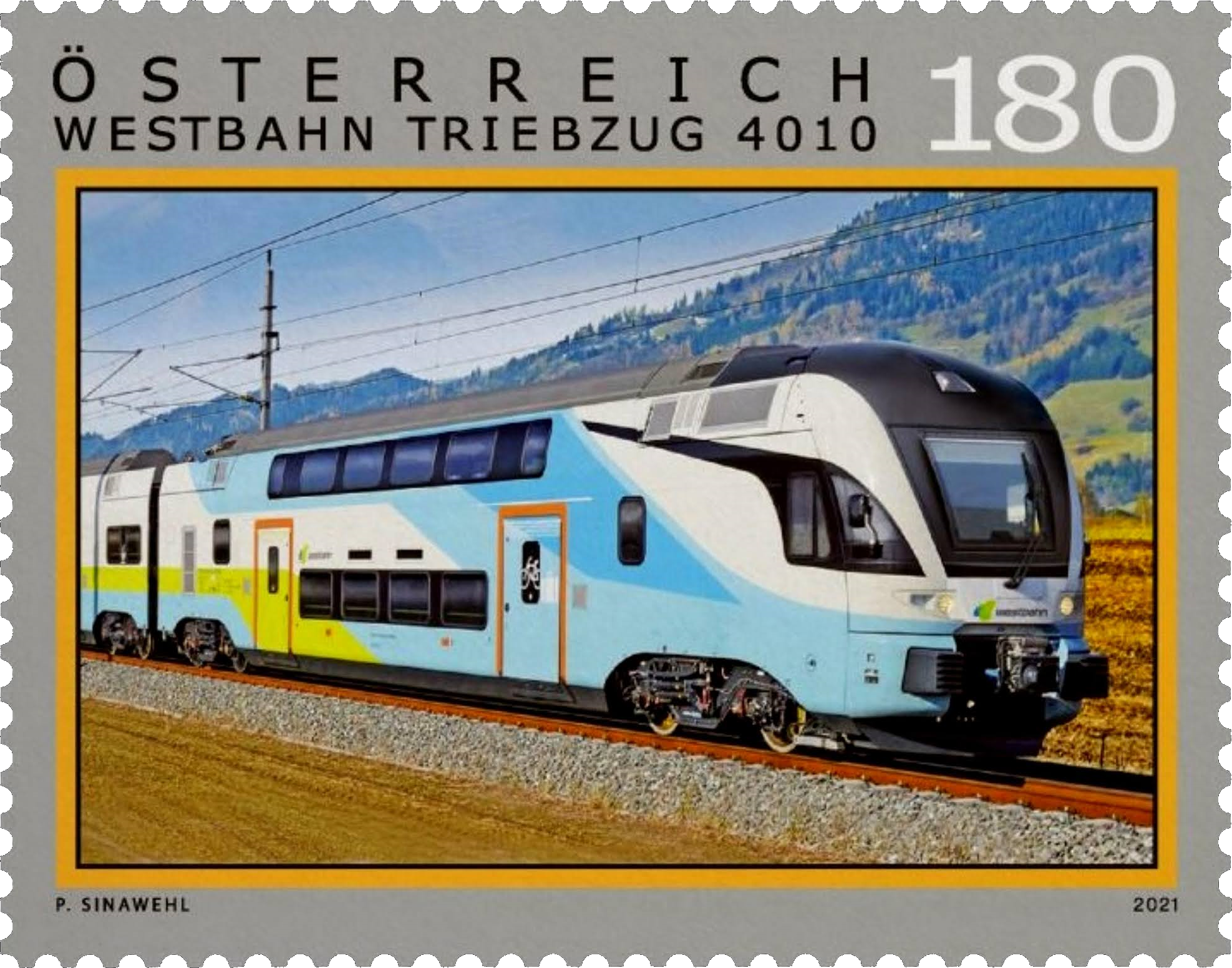 Good on rail
For ten years, the WESTbahn has been transporting its passengers between Vienna and Salzburg, providing a fast and convenient direct connection on this busy route.

The private company was founded in 2008 as a subsidiary of Rail Holding AG as part of the railway liberalisation. Since December 2011, the WEST bahn has been operating passenger services between Vienna Westbahnhof and Salzburg and covers the 317-kilometre route in around 2.5 hours without a changeover.

The WESTbahn uses eight six-piece low-floor electric multiple unit sets of the 4010 series KISS 1 and KISS 2 from the Swiss manufacturer Stadler Rail AG. They have 24 axles – eight of which are powered – and can reach a top speed of 200 km/h. The double-story sets with a length of 150 metres each offer more than 500 seats. Great emphasis is placed on comfort and accessibility, and specially equipped areas are available for travelers with reduced mobility. All train sets are usually on the road during the day, the maintenance work takes place during the night. From December 2021, the WESTbahn will be running with a new fleet of 15 six-car KISS 3 stake 4010. The motif of the stamp from the “Railways” series, which has been refined with stitch printing, shows a 4010 train in the typical blue-white-yellow-green design of the WESTbahn.

WESTbahn Management GmbH is a subsidiary of the Austrian Rail Holding AG, which was founded in 2008 and operates long-distance services between Vienna and Salzburg on the similar Western Railway line since 11 December 2011. The name WEST derives not exclusively from the route, but also from the founder WEhinger STefan.

On 30 June 2009, a framework agreement was concluded with Austrian Federal Railways (Österreichischen Bundesbahne or ÖBB for short) on the allocation of infrastructure capacity for the years 2011 to 2016. This ensured that the Western Railway could offer regular services between Vienna and Salzburg.

After ÖBB cancelled the direct service between Graz and Linz with the timetable change in December 2010 and it became known at the beginning of February 2011 that the Western Railway was considering operating this line as well. When ÖBB announced shortly afterwards that it would again operate this line with a direct connection, these plans were rejected.  From February 2011, Managing Director Stefan Wehinger engaged two lobbyists to discredit ÖBB in public and politics. The order was made without the knowledge of the Supervisory Board.

Following speculation, the Westbahn confirmed in July 2011 well-advanced negotiations with the French railway company SNCF on a possible joint venture. On 23 August 2011, it was announced that the transaction had been completed a day earlier and SNCF now holds a 26% stake in the company. Nevertheless, the company did not want to serve the international line Vienna-Paris, as it would be better served by the aircraft.

The Stadler KISS (own spelling for “komfortabler innovativer spurtstarker S-Bahn-Zug”) is an electric double-deckermultiple-unit train made by the Swiss manufacturer Stadler Rail. The trains are available as two- to eight-part train units for standard and wide gauge. The KISS can be optimized for platform heights of 550 and 760 mm.  The trains, which were developed and sold under the name “Stadler Dosto” from 2008 to 2010, have been delivered since 2011. Since then, 297 Kiss have been sold in 11 countries (as of December 2018).

The entrances to 570 mm height are barrier-free.  The multiple units reach a top speed of 200 km/h at an acceleration of 0.85 m/s2 (four-parter 0.9 m/s2).  These are structurally based on the RABe 511 trains of the Zurich S-Bahn, also manufactured by Stadler. All wheelsets of the end cars are driven, the middle cars are powerless. Only the 4110 and 4010 008 sets delivered in 2017 are printer-ready.

Travellers have leather seats and freeWi-Fi. Almost every car is looked after by its own train attendant/steward.  Trains are not handled by a train driver, as is customary in the case of the major railway companies, but by the train driver. Of the company’s approximately 200 employees, around 85% are expected to be on trains.

In the middle cars there is a café with eight seats, where cold and hot drinks can be purchased from coin vending machines. Train attendants, referred to as stewards on the Western Railway, sell tickets and catering products and clean the train. In a carriage of the first series trains there is a smoking lounge with 16 seats, from which no smoke should be drawn to other areas of the train with the use of a separate air conditioning system. Due to legal complaints, smoking was banned there in mid-January 2012, but was allowed again in mid-September 2012 following a ruling by the Independent Administrative Senate. However, from May 2018 smoking was banned completely by the Tobacco Act. Smoking lounges have already been dispensed with in the sets, which were built in 2017.

In the middle cars the seats are arranged one after the other, in the end cars opposite at four tables. A final car (W 600) is designated as the Westbahn + and can be used for an extra charge of 13.90 euros (up to 200 km) or 19.90 euros (over 200 km). There are two seats available to each passenger, and the price includes a daily newspaper and a small cold drink, which are served on the square, as are various snacks from the steward.

Three central carriages are equipped with separate toilets for men and women, with a separate pissoir in the men’s toilet; the disabled-friendly car (W 400) has a wheelchair-accessible toilet on the lower level. On the lower floor of the middle carriages there are luggage racks, where a shelf can be folded down to accommodate bicycles brought with you. In addition, bicycles can also be mounted on the entry platform with brackets, so that up to 16 bicycles can be taken aboard.

In 2015, an additional six-part and nine four-part KISS-2 multiple units were ordered, which went into operation in 2017 and can be coupled with the existing vehicles. Externally, the smaller windshields stand out. The replacement took 16 hours initially, but the KISS-2 trains can now be replaced in about two hours. The single-wing exterior doors improve the tightness of the print. An additional pressure vessel makes the boging frame softer, additional sling absorbers ensure a better smoothness. After the delivery of the new sets, the seven trains of the first generation were adapted. These included the installation of the smaller windshield and the renewal of the seat covers and carpets.

On August 23, 2017, a new KISS train of the WESTbahn collided with an ore train from CargoServat the Linz Ost transfer station. The WESTbahn train should have waited for the freight train to pass after a test operation as an empty journey at a traffic prohibition signal showing protection signal. The train driver of the WESTbahn was seriously injured and two people on the train suffered minor injuries. The damage to property amounted to a double-digit million amount.