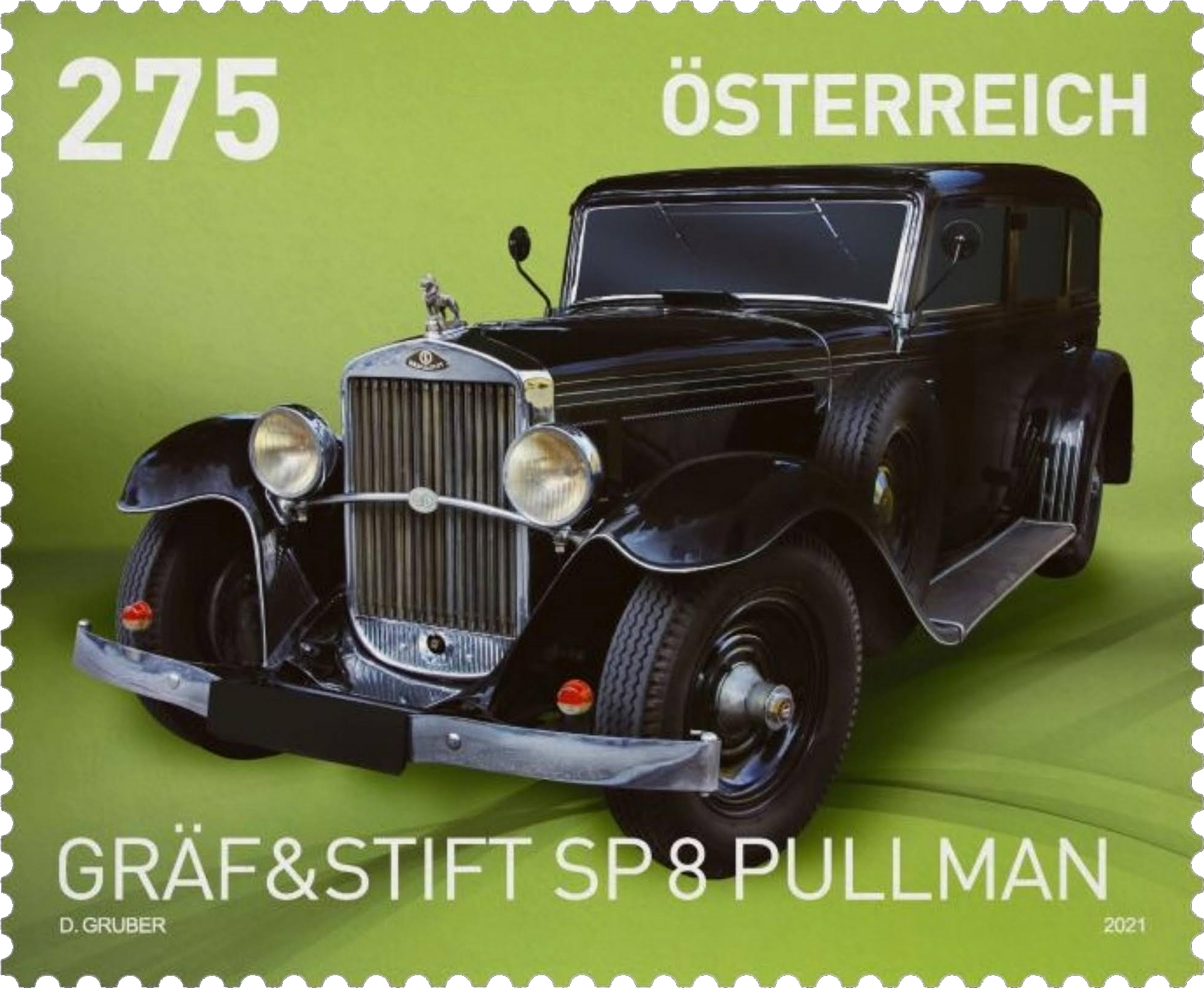 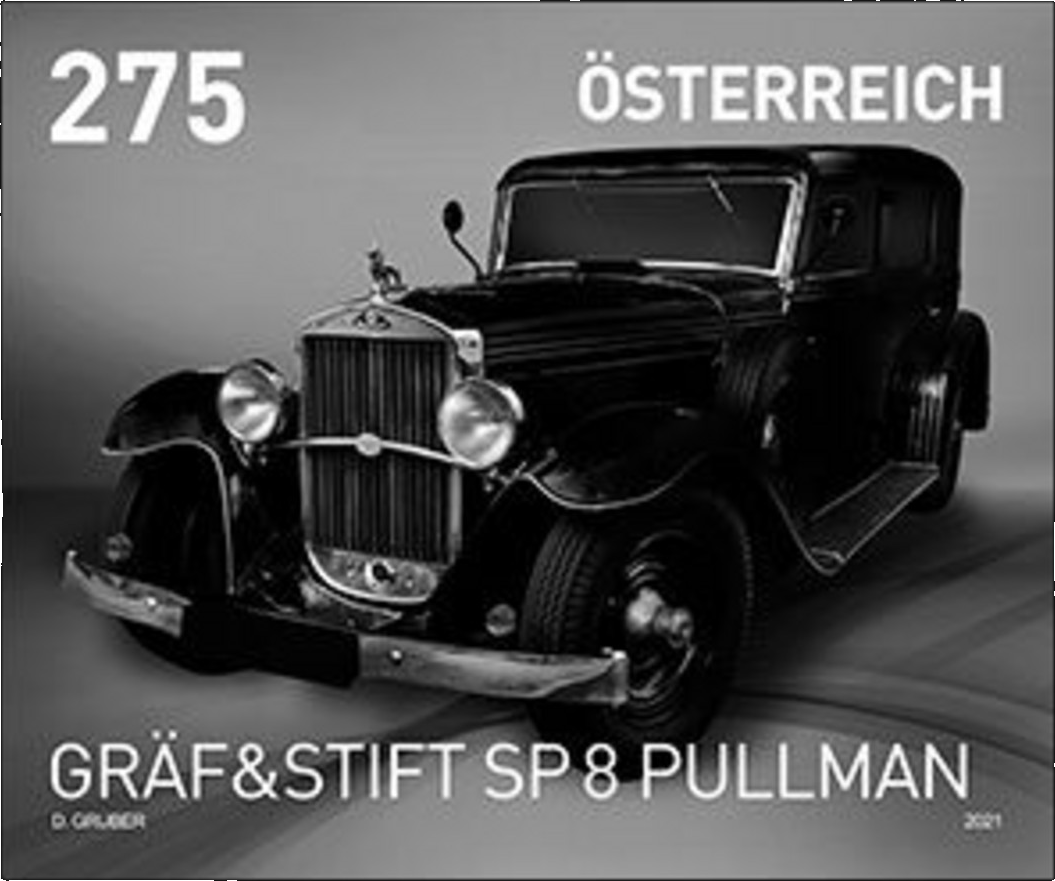 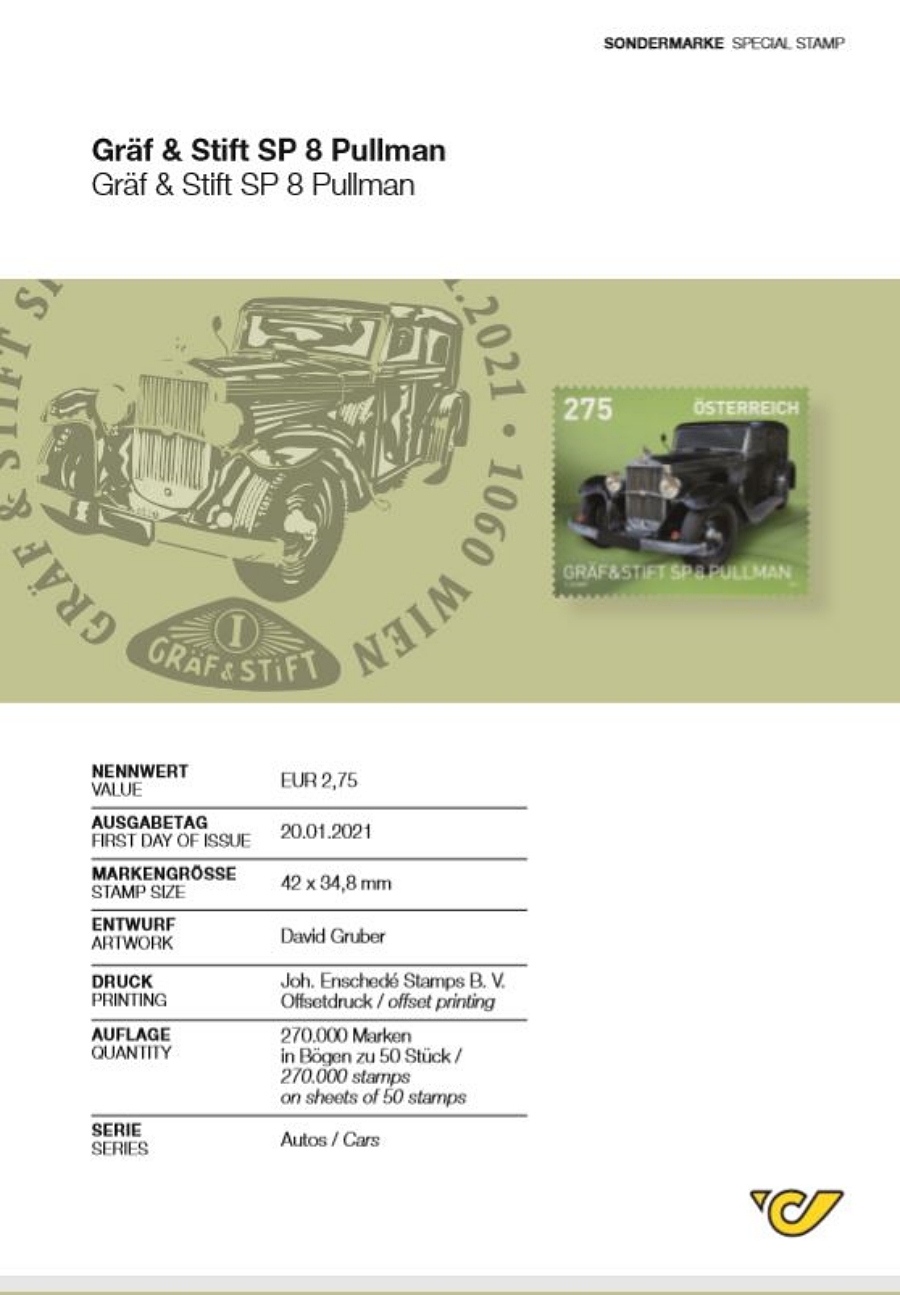 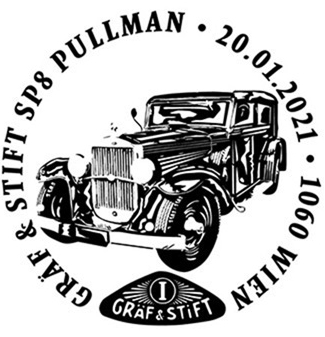 The SP 8 is a luxurious 7930s car made by the Austrian car makers Graf &Stint. The stamp from the “Cars“series shows a Pullman saloon car from 7930.

In 1896 three brothers by the name of Gräf founded a car workshop in Vienna, producing their first car a year later. In 1901 Wilhelm Stift joined the company as an investor, which was henceforth known as Gräf & Stift. The radiator was topped by a standing lion, reminiscent of the figures on Vienna’s Schemerl Bridge. Gräf & Stift mainly produced large saloon cars — such as the vehicle in which the heir to the throne Franz Ferdinand and his wife were shot in 1914— and buses, but later added commercial vehicles to their range. In 1971 the company was bought by the Österreichische Automobil Fabriks-AG, and subsequently traded as ÖAF-Gräf & Stift AG, before ultimately being taken over by the MAN group.

Only 30 of the top-of-the-range SP 8 model were built between 1930 and 1936. It was based on the SP 5 to SP 7 series with their 6-cylinder engine. However, the six-litre straight-eight engine of the SP 8 increased the output to 120 HP and could reach speeds of up to 120 km/h. The vehicle shown on the stamp, dating from 1930, cost 52,000 Austrian Schillings in its day and was used by the director general, Dipl.-Ing. Josef Gräf. It survived the war in pieces at the works, with only the interior needing to be replaced in 1948. In 2005 the “Verein zur Förderung der historischen Fahrzeuge der Österreichischen Automobilfabriken” acquired the vehicle.

In 1896, the three Gräf brothers founded a workshop in Vienna, which in 1897 delivered the first car with a water-cooled four-cylinder engine. This vehicle was equipped with a four-speed gearbox with backdrop gear instead of the usual belt transmission at the time. In 1898, the first front-wheel drive automobile was produced. This technique was patented in1900.

In 1901, the investor Wilhelm Stift sen. was added, who founded the public company Gräf & Stift (Mechaniker) with the Gräf brothers on 1 November 1901, which from 1904 led the company at the address Weinberggasse 70, Vienna-Döbling (district of Sievering). From 1905, the company built mainly large limousines (e.g. for the Habsburg Imperial House) and small buses, which were used for tourist traffic from 1908. In addition, Gräf & Stift was also an important manufacturer of buses in Austria – both for urban and interurban transport – and of superstructures for trams. The Dolomite bus developed by Gräf & Stift had 22 kW (30 hp), a folding top and eleven seats, which were divided into two classes. It was used on the Vienna-Bozen route.

The company’s vehicles carried the statue of a lion, whose shape was modelled on the lion of the sculptor Rudolf Weyr at the Nussdorfer Schleuse in Vienna.

In a double phaeton (28/32 hp) by Gräf & Stift, which was owned by Franz Graf Harrach, the Austro-Hungarian heir to the throne Franz Ferdinand and his wife Duchess Sophie von Hohenbergsat when the assassination attempt on them in Sarajevo on 28 June 1914, which triggered the First World War, sat. The car is now on display at the Army History Museum in Vienna.

In the war years 1916/17 the Döblinger Werk was substantially expanded. The planning was in the hands of architect Philipp Jakob Manz.  In 1929, Gräf & Stift merged with the Autofabrik Perl, which had been based in the present-day Vienna district of Liesing since 1922. Initially, trucks and buses were mainly produced there, but production was temporarily halted in 1929.

On 28 May 1931, the Vienna-Budapest long-distance line was opened with Gräf & Stift buses. The first journey was carried out in six hours by the designer of the bus, Dipl.-Ing. Josef Gräf.

In the March days of 1938, the workforce consisted of only about 300 men, some of whom were on short-time work. After the “connection” 1,500 people were employed. The production program was switched from small series to large series of trucks and buses.

After the Second World War, car production was not resumed. In the early 1960s, the company began to make losses. In 1964, only 165 trucks were built. Around 1970, losses continued to increase. Gräf & Stift began negotiations with the Austrian Automobile Factory AG and in 1971 ÖAF acquired 99% of the Gräf shares. The new company name was ÖAF-Gräf & Stift AG. In the same year, the company was taken over by MAN AG. As a result, self-constructions were abandoned in favour of slightly modified MAN trucks and buses.

In 1978, the company received the State Award and was allowed to use the federal coat of arms in business transactions. In 1988, MAN built a new plant on the site of the old Gräf & Stift factory in Liesing. In 2004, MAN again invested seven million euros for a modern and environmentally friendly paint shop, thus securing jobs in Vienna. MAN at the old location of Gräf & Stift is still the largest employer in the district.

The Gräf & Stift SP was an automobile for the upper class, initially manufactured in 1924. In contrast to the SR 3 model, the car was slightly smaller and had a 3.9-litre engine with overhead camshaft. The car had a 6-cylinder in-line engine installed in the front, which propelled the rear wheels via a 4-speed transmission. It developed 70 hp (51 kW) at 2500 rpm and helped the car to a top speed of 100 km/h.