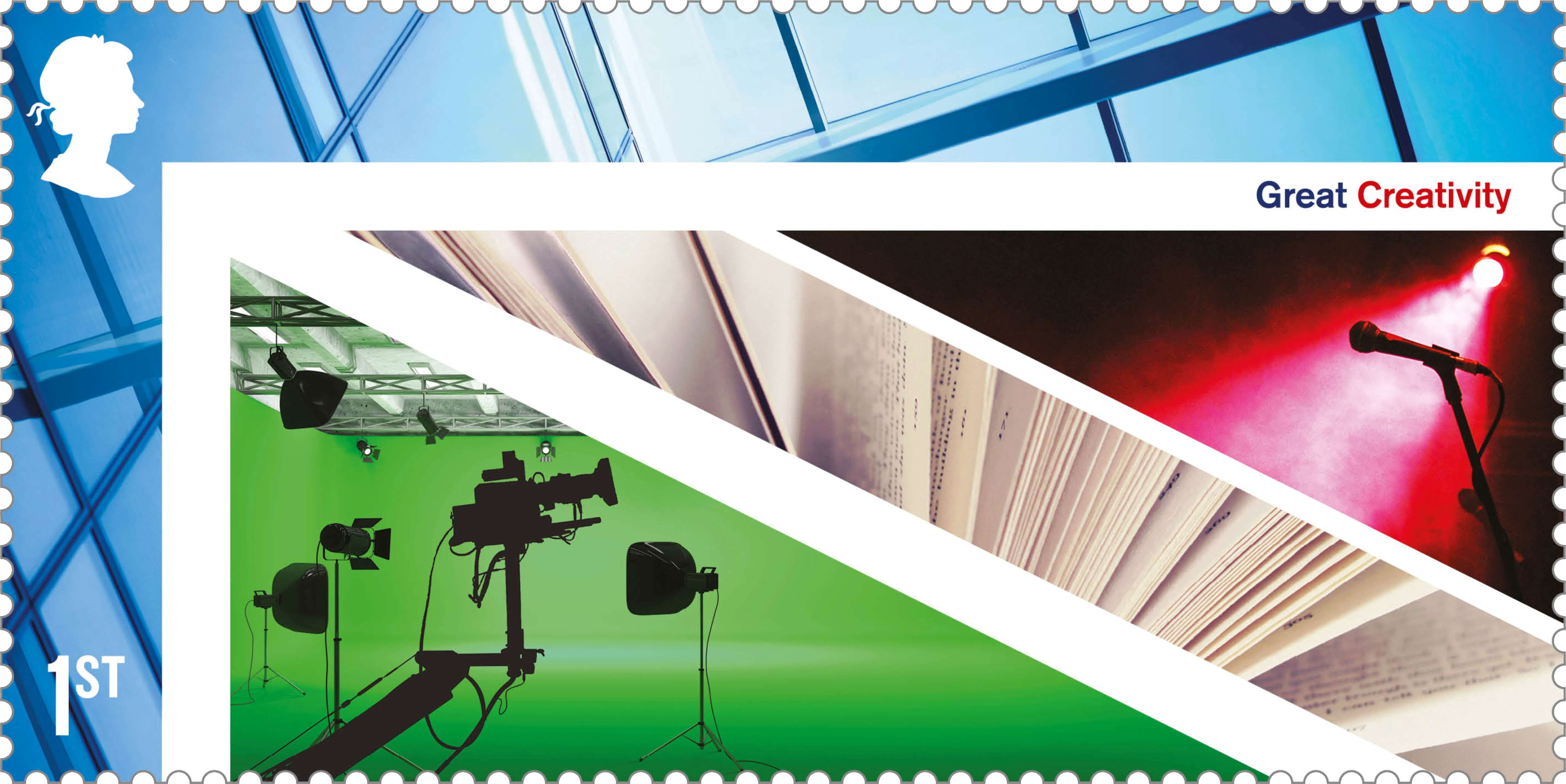 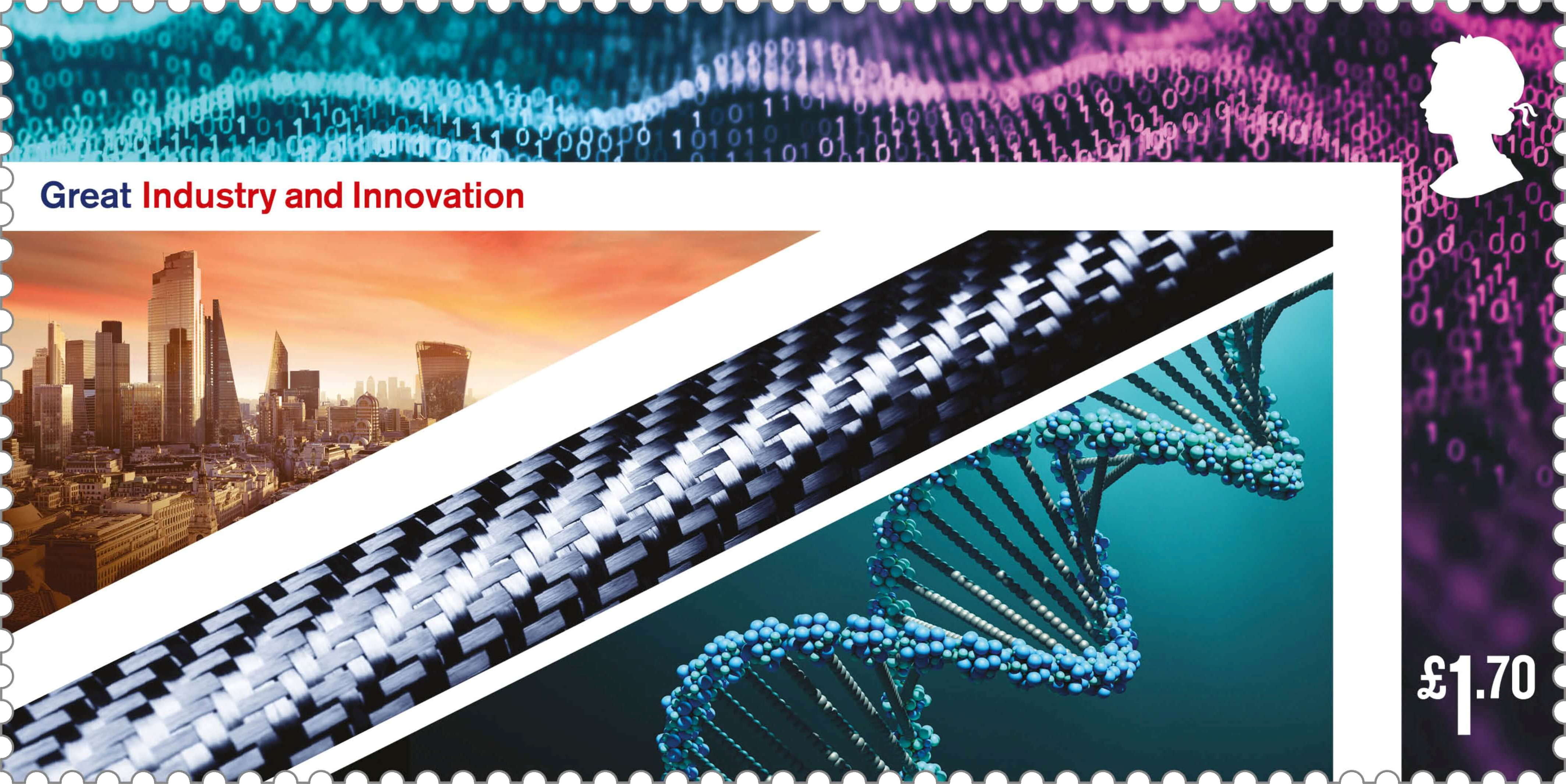 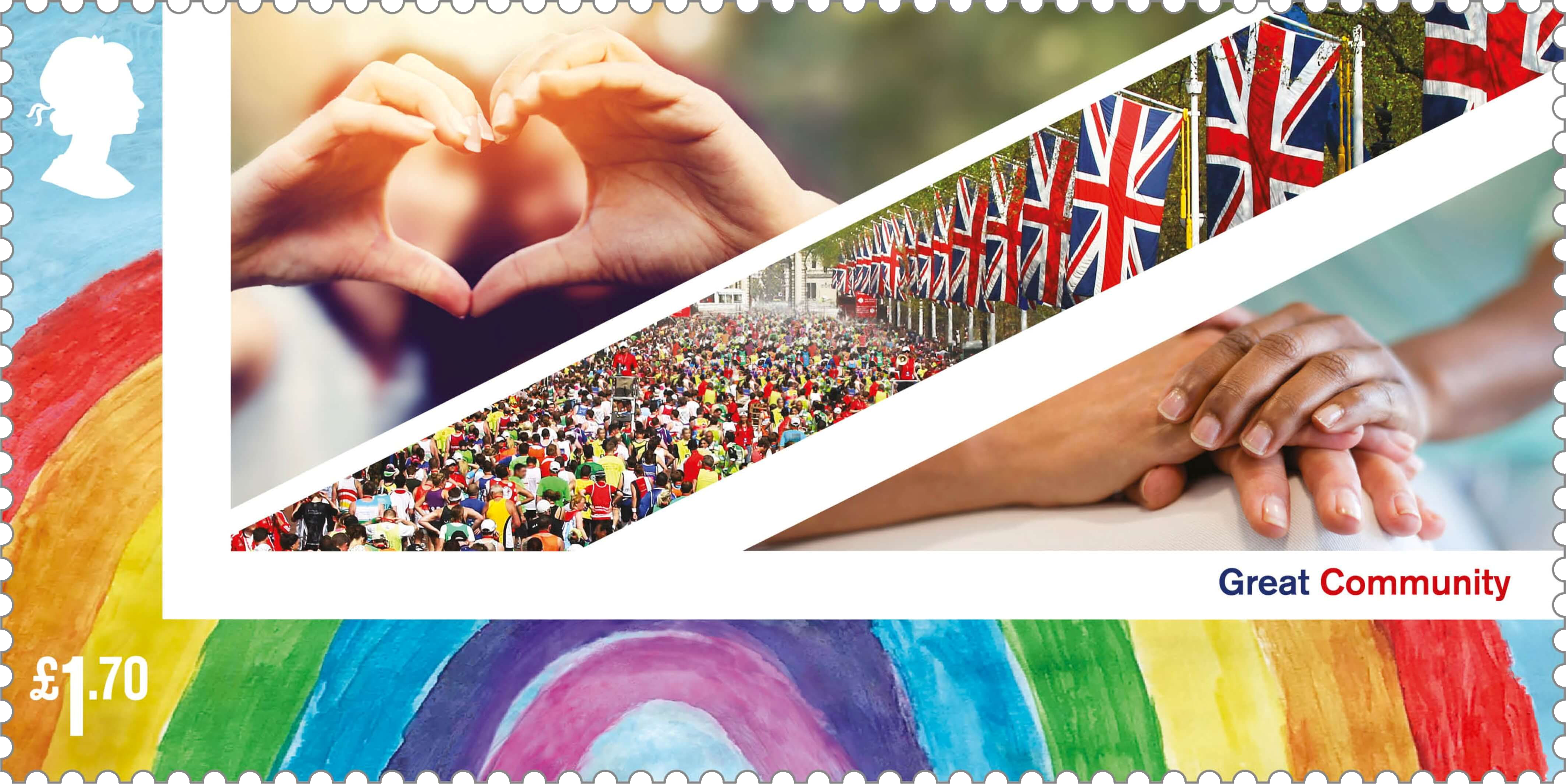 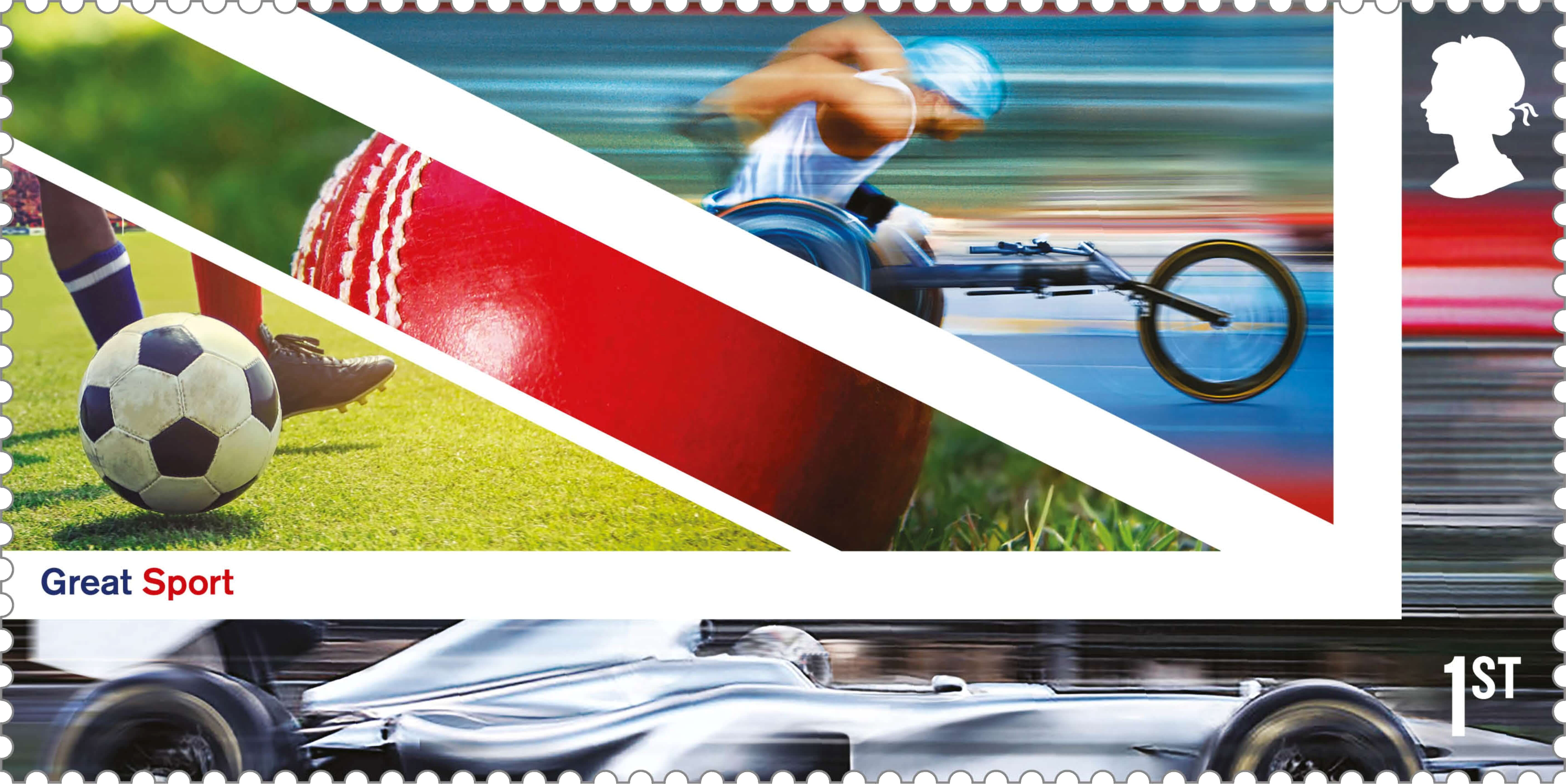 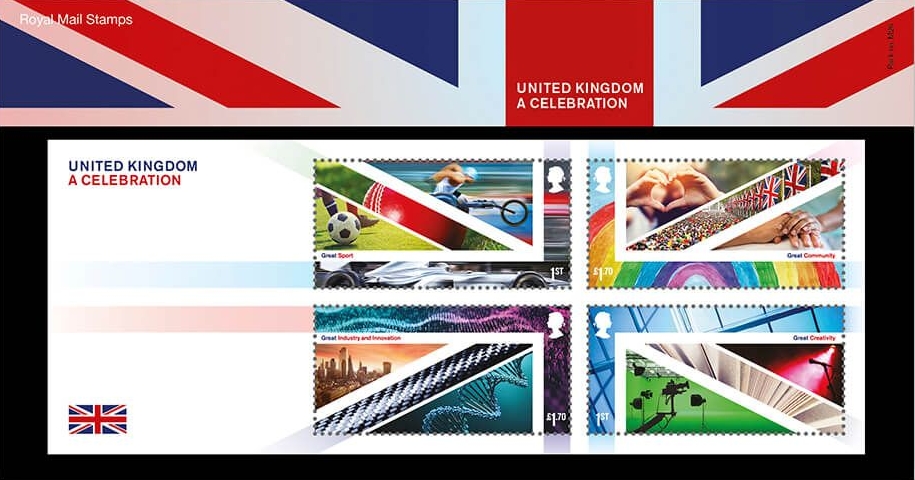 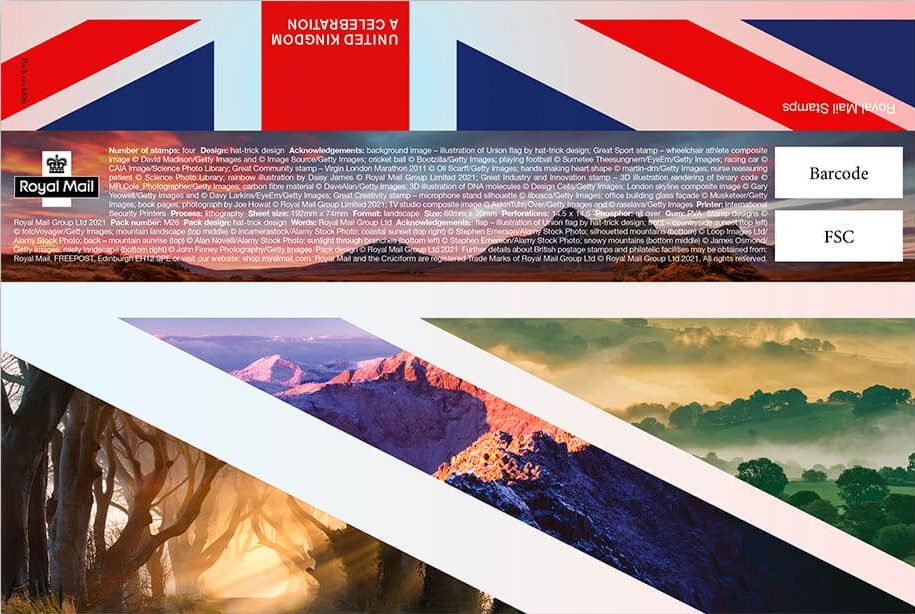 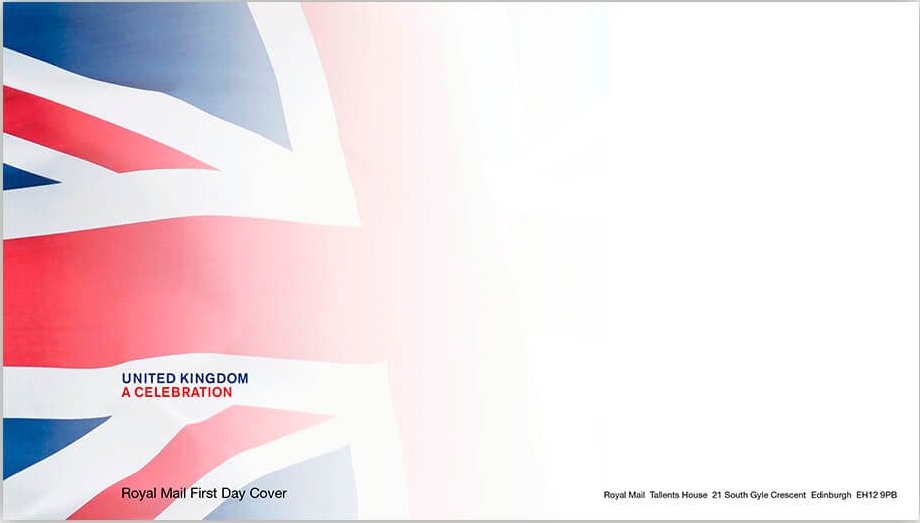 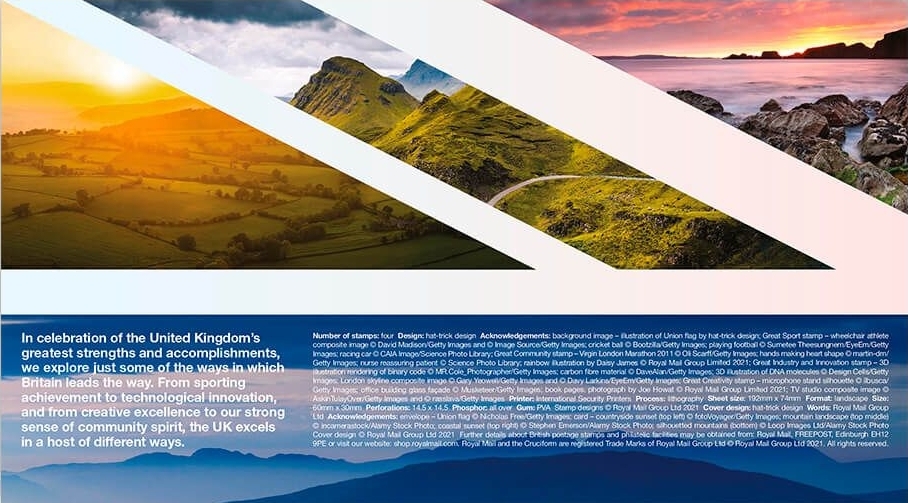 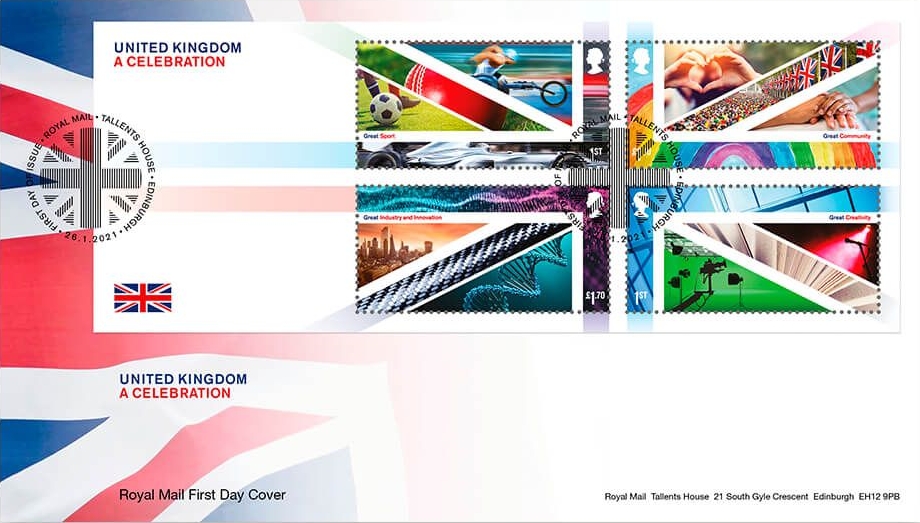 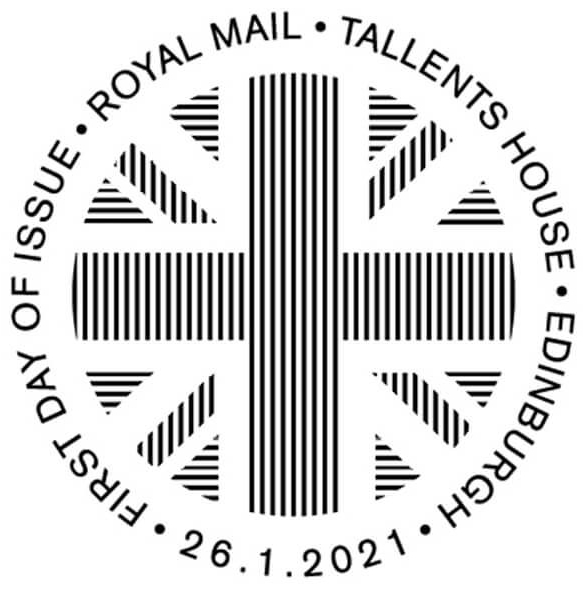 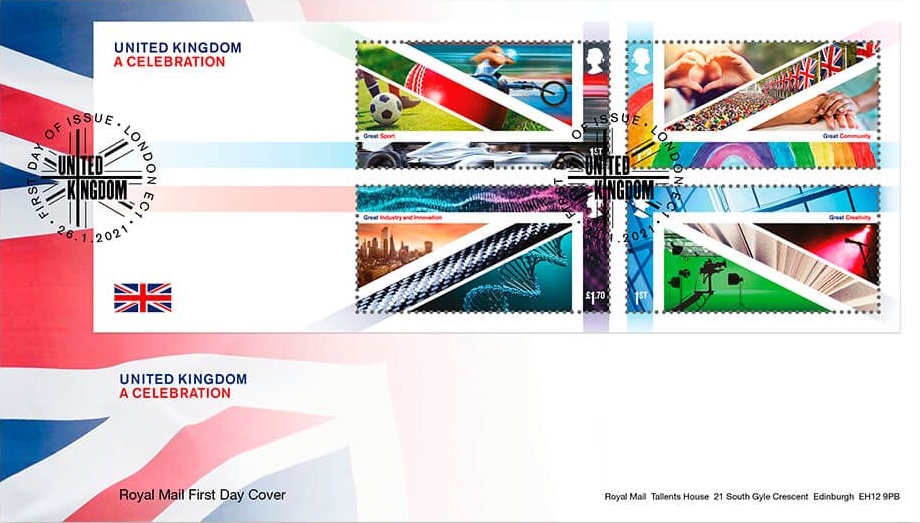 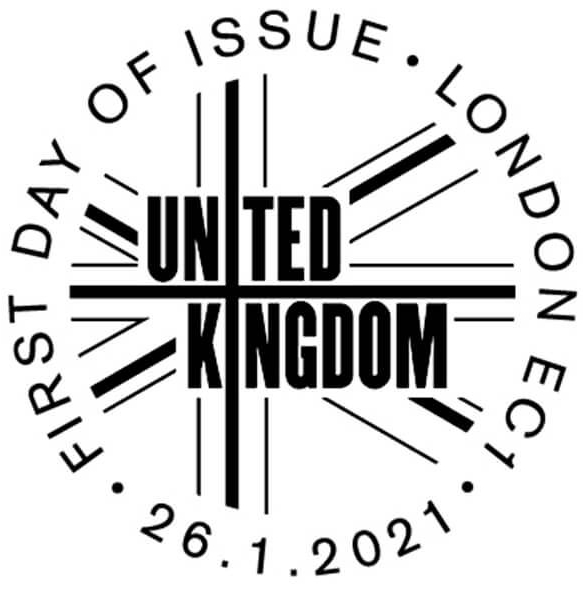 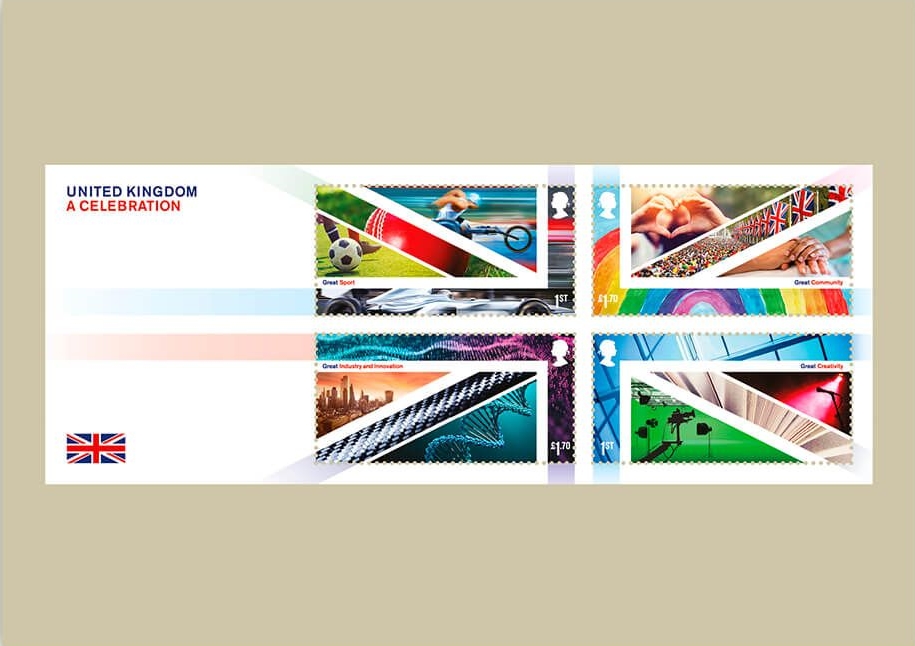 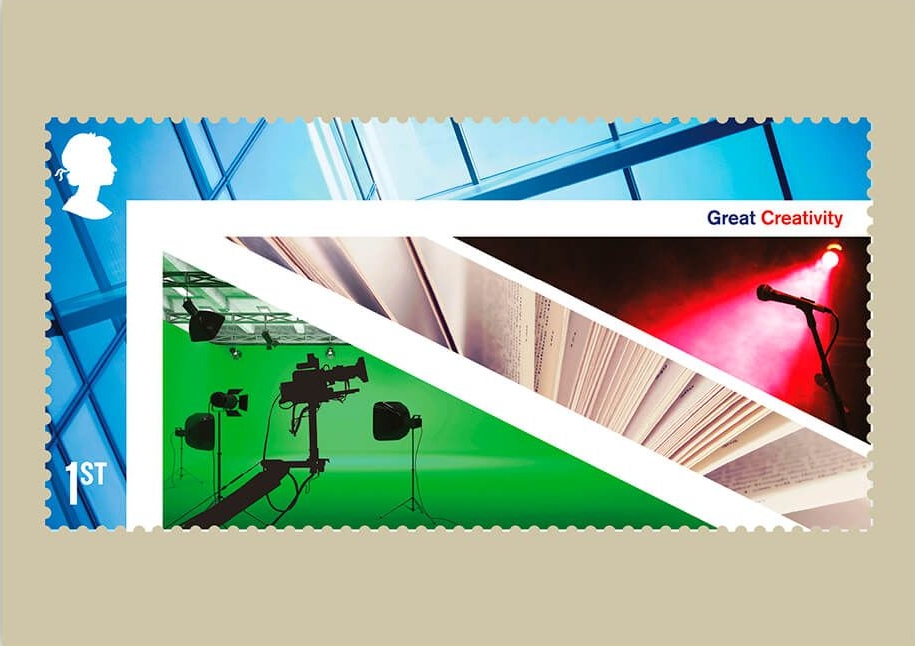 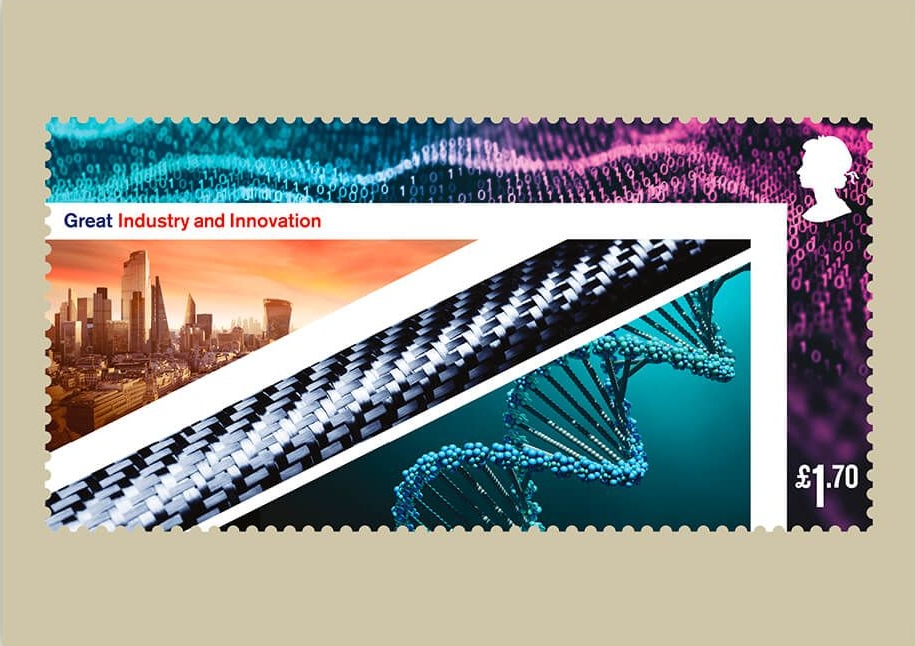 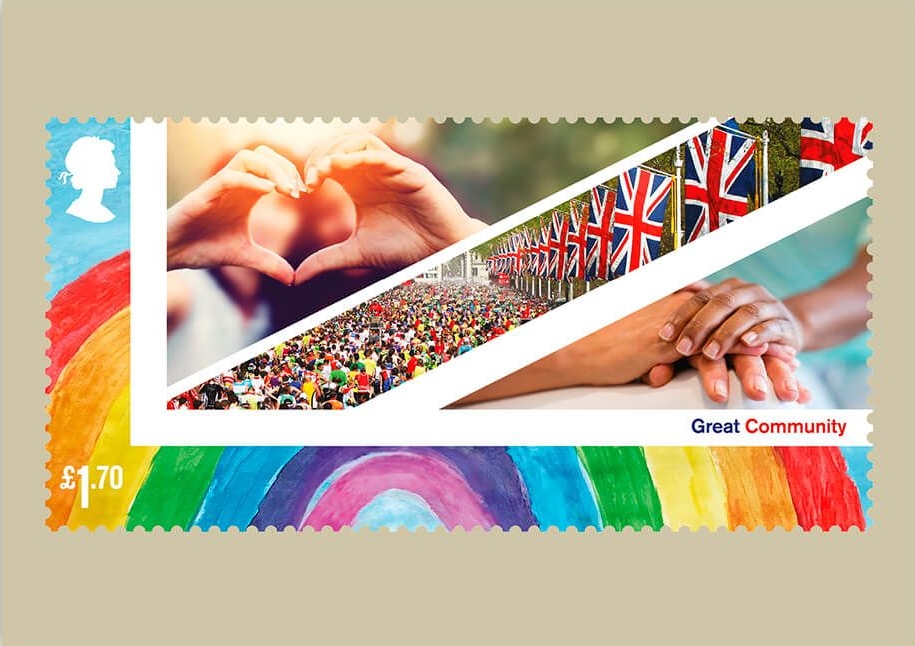 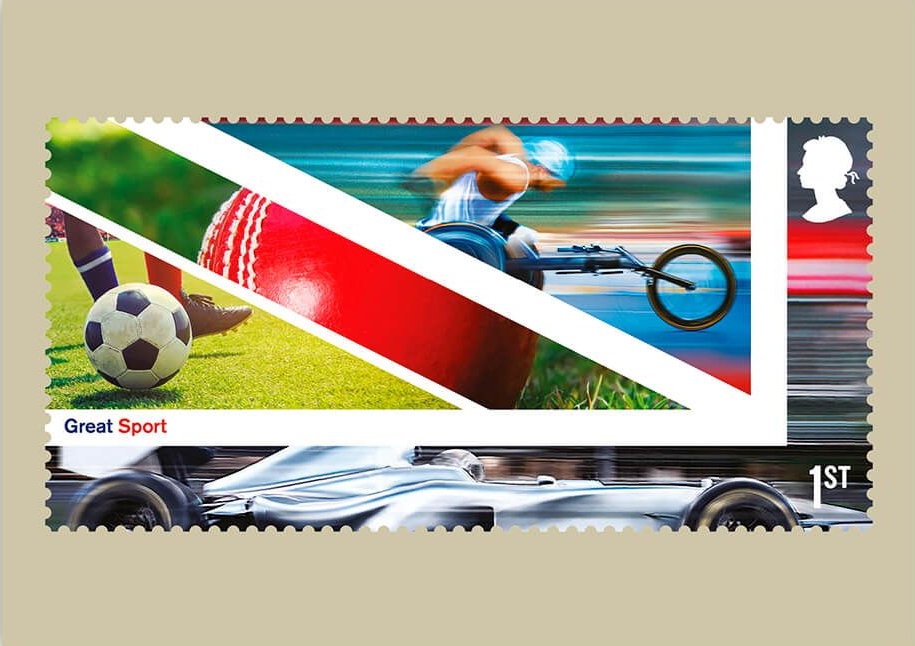 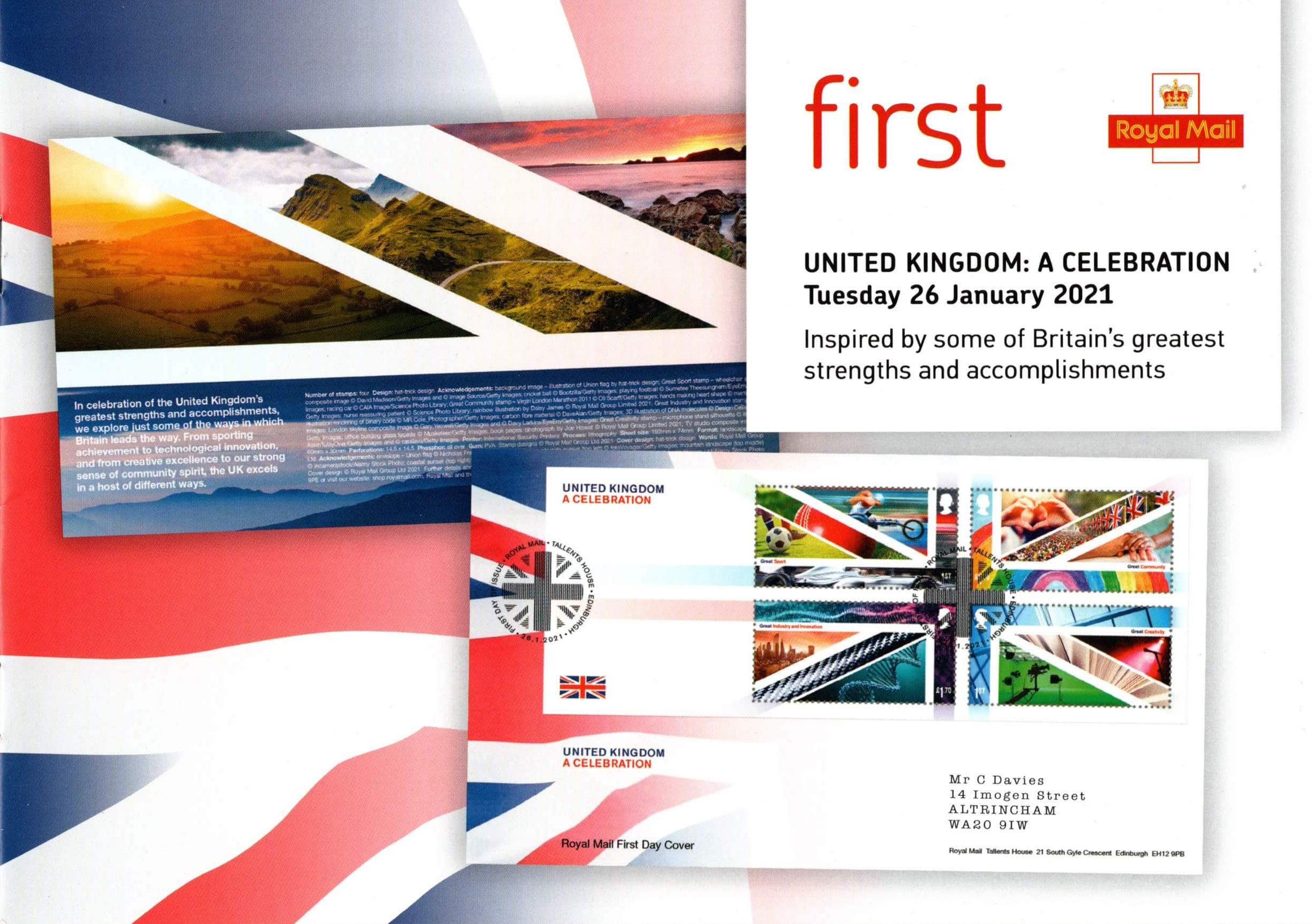 All four stamps from the United Kingdom: A Celebration issue featured on a collectible Miniature Sheet.

The stamps explore just some of the ways in which Britain leads the way.

From sporting achievement to technological innovation, and from creative excellence to our strong sense of community spirit, the UK excels in a host of different ways.

In the creative industries too, the UK is a world leader. Britain is renowned for the originality and quality of its contemporary music, with the music industry worth around £5.2 billion annually. The UK has also become one of the world’s leading centres for film and TV production. In the sphere of architecture, cities around the world are being reshaped by British architects. And in the field of literature, British writers are world-renowned.

Elsewhere, in the fields of science and technology, Britain stands tall. For example, DNA fingerprinting was perfected in the UK and Britain played a central role in the sequencing of the first draft of the human genome. The UK is a leading light in the digital technology sector, which contributes around £149 billion per year to the economy. The country is also a world leading centre for financial services.

Equally as significant is the UK’s long-held sense of community spirit. British people have often come together in celebration, in remembrance and also in hope during times of uncertainty. Indeed, street parties, parades and celebrations for royal anniversaries, major sporting occasions and other national and local events have characterised the British way of life for centuries.

Britain is a proud and passionate sporting nation. It is the birthplace of football and cricket, and, in 1948, hosted the first organised competition for disabled athletes. The UK has also produced 10 Formula 1 champions – more than any other country.

All four United Kingdom: A Celebration stamps in a beautifully presented souvenir. The Presentation Pack’s artwork complements the stamp designs with stunning images from across the United Kingdom. A collectible keepsake celebrating our greatest strengths and accomplishments.

A unique, personalized collectible featuring the Miniature Sheet postmarked on the day of issue. Personalize with the name and address of your choice.

The Miniature Sheet’s four stamps celebrate the United Kingdom’s strengths and accomplishments in sport, creativity, industry and innovation and community.

Includes an information card containing an overview of the stamps on the Miniature Sheet. The design on the front of the envelope features the collection’s title set against the image of a fluttering Union Flag.

Royal Mail is extending the First Day Cover for this issue due to the uncertainty and restrictions on movement arising from Covid-19. This applies until further notice to First Day Covers ordered directly from Royal Mail as well as to those submitted from Post Office branches for cancellation at a Special Handstamp Centre.

This set of five postcards features enlargements of all four United Kingdom: A Celebration stamps plus a composite of the Miniature Sheet.

Perfect for collecting, framing or sending.