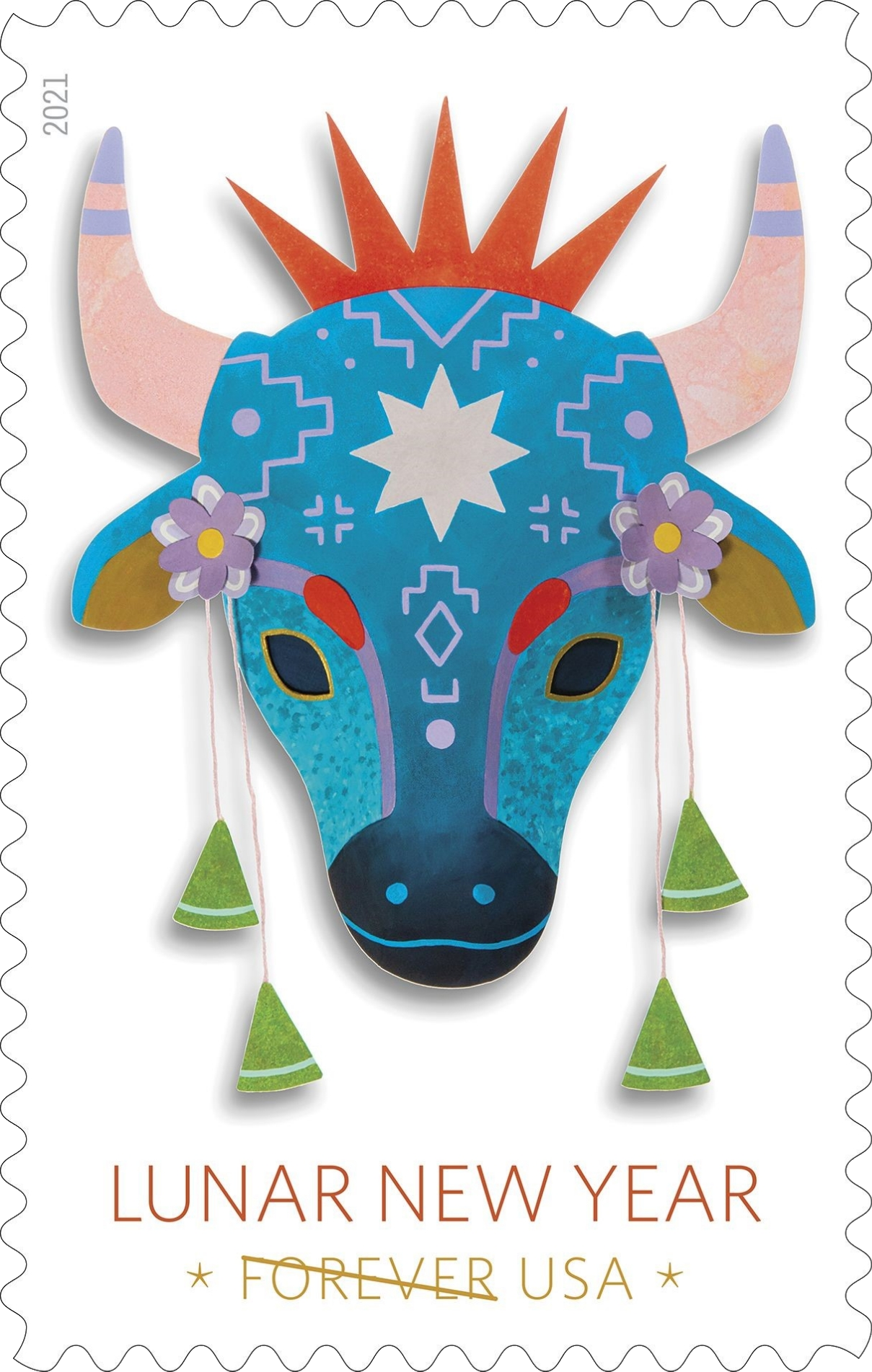 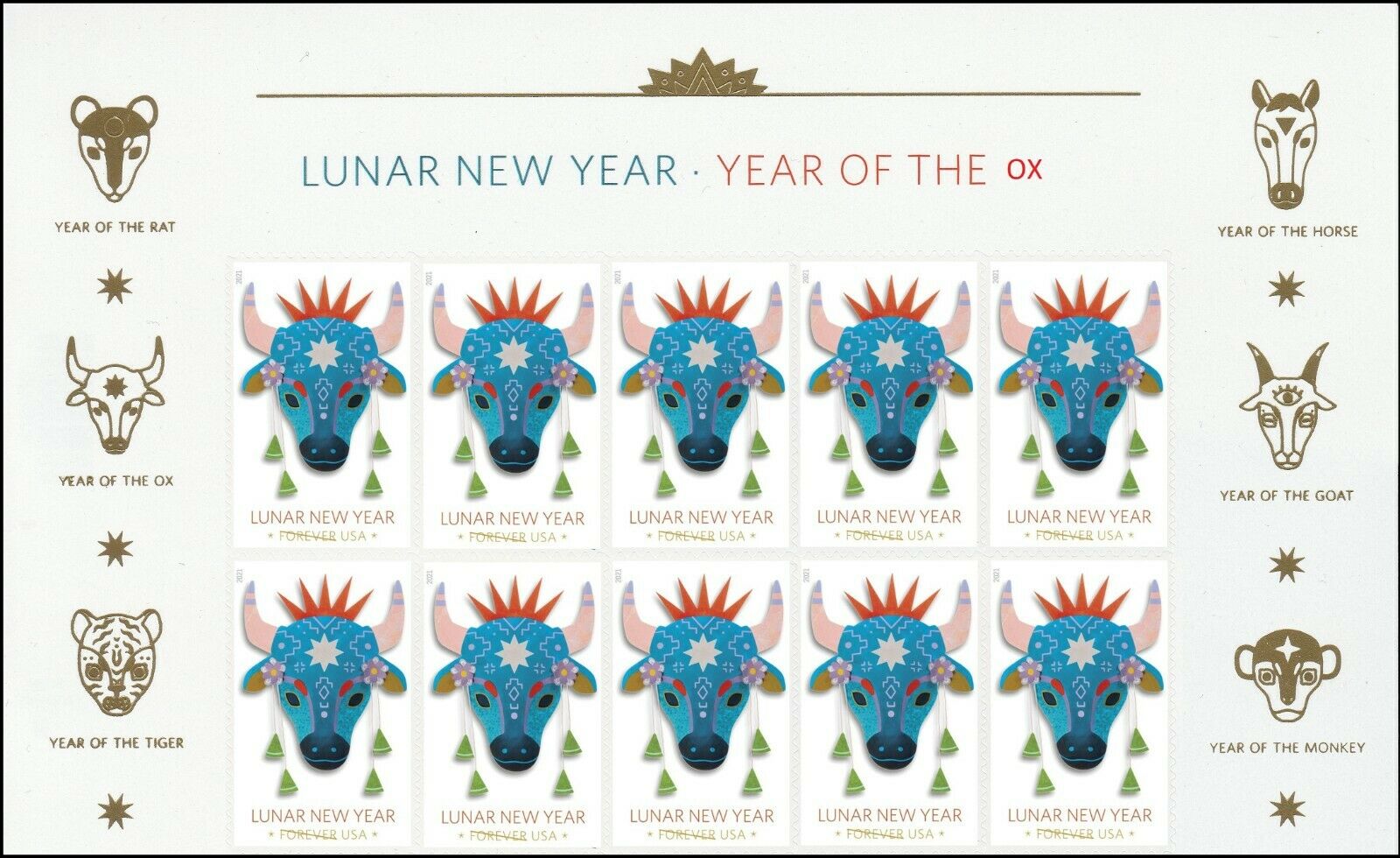 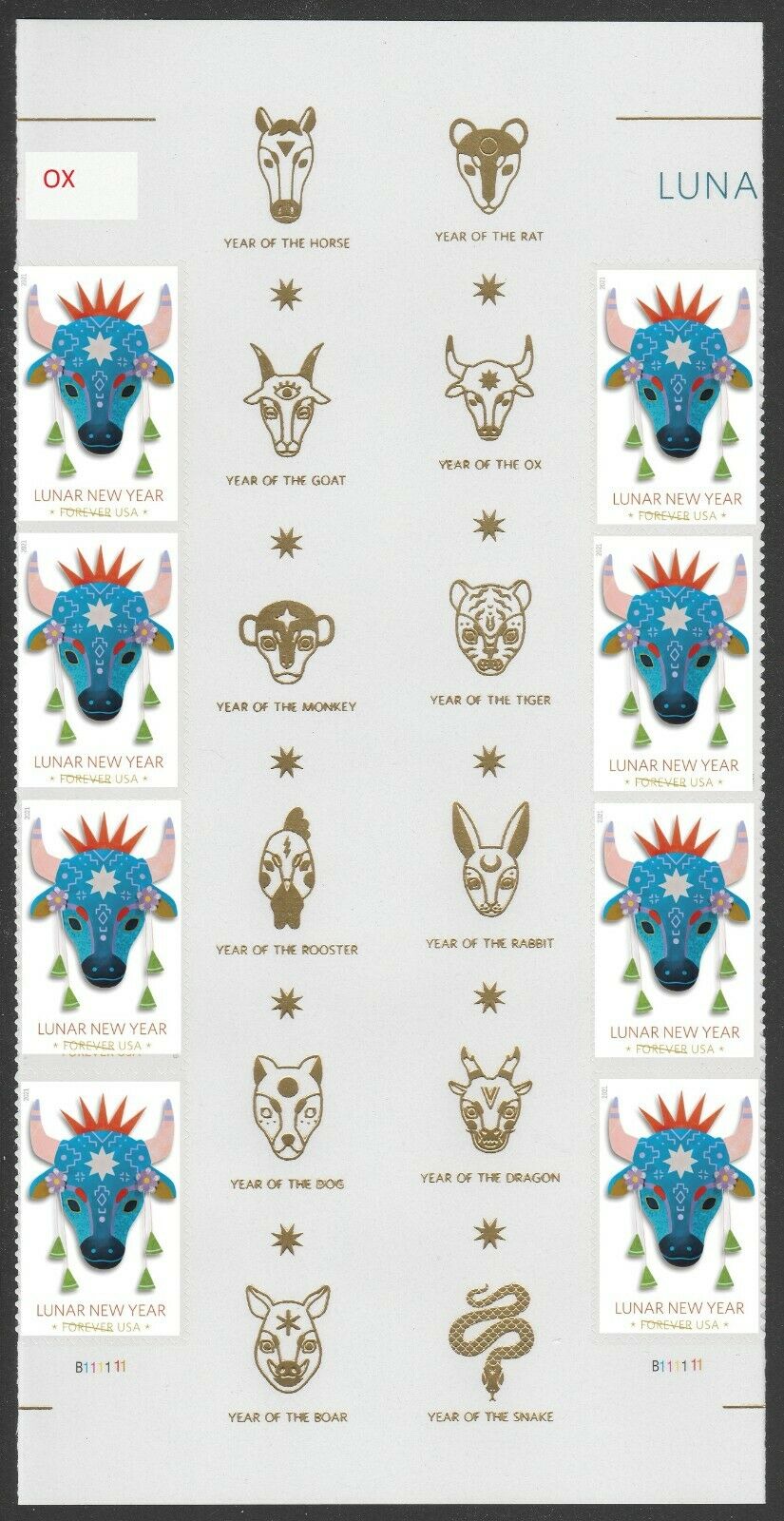 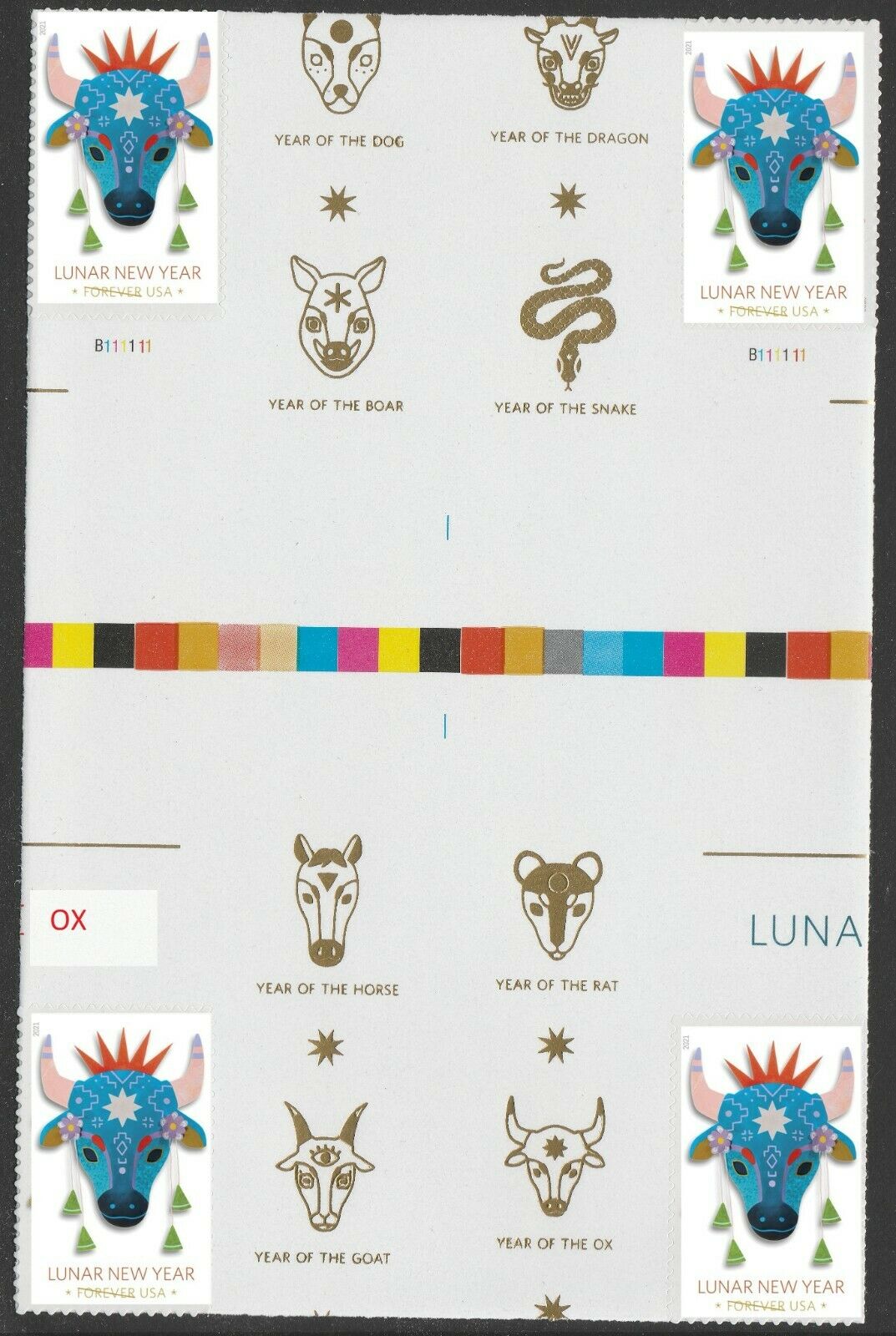 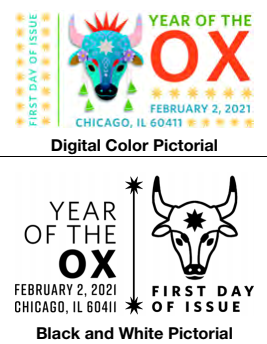 In 2021, the United States Postal Service issues the second of 12 stamps in a new series of Lunar New Year stamps. Calling to mind the elaborately decorated masks used in the dragon or lion dances often performed during Lunar New Year parades, these 3-dimensional masks are a contemporary take on the long tradition of paper-cut folk art crafts created during this auspicious time of year. The ox mask in the stamp design incorporates elements with symbolic meaning. Several of the patterns were created with the style of Asian textiles in mind as well as purple flowers that represent the arrival of spring, which Lunar New Year also signals in Chinese culture. The star in the center of the ox’s head references the celestial themes of the Chinese zodiac. Art director Antonio Alcalá designed the stamp with original art by Camille Chew.

How to Order the First-Day-of-Issue Postmark

Customers have 120 days to obtain the first-day-of-issue postmark by mail. They may purchase new stamps at their local Post Office™ or at The Postal Store® website at usps.com/shop. They must affix the stamps to envelopes of their choice, address the envelopes (to themselves or others), and place them in a larger envelope addressed to:

After applying the first-day-of-issue postmark, the Postal Service™ will return the envelopes through the mail. There is no charge for the postmark up to a quantity of 50. There is a 5-cent charge for each additional postmark over 50. All orders must be postmarked by June 2, 2021.

How to Order First-Day Covers

The Postal Service also offers first-day covers for new stamp issues and Postal Service stationery items postmarked with the official first-day-of-issue cancellation. Each item has an individual catalog number and is offered in the USA Philatelic catalog and online at usps.com/shop. Customers may register to receive a free USA Philatelic catalog online at usps.com/philatelic.

Locally produced items are not authorized. Only merchandise that has been approved and assigned an item number by Headquarters Retail Marketing may be produced and sold

Lunar New Year (農曆新年, 中國新年 in traditional Chinese; 农历新年, 中国新年 in simplified Chinese; nónglì xīn nián and zhōngguó xīn nián pinyin) is the festival that celebrates the beginning of a new year on the traditional lunar calendar. In Chinese culture and East Asian countries, the festival is commonly referred to as the Spring Festival (春節;  春节; Chūn Jié) as the spring season in the lunisolar calendar traditionally starts with lichun, the first of the twenty-four solar terms which the festival celebrates around the time of.  Marking the end of winter and the beginning of the spring season, observances traditionally take place from New Year’s Eve, the evening preceding the first day of the year to the Lantern Festival, held on the 15th day of the year. The first day of Lunar New Year begins on the new moon that appears between 21 January and 20 February. In 2021, the first day of the Lunar New Year will be on Friday, 12 February, which is the Year of the Ox .

Lunar New Year is one of the most important holidays in China, and has strongly influenced Lunar New Year celebrations such as the Losar of Tibet (ལོ་གསར་) and of China’s neighboring cultures, including the Korean New Year (설, seol), and the Tết of Vietnam. It is also celebrated worldwide in regions and countries with significant Overseas Chinese or Sinophone populations, including Singapore, Indonesia, Malaysia, Myanmar, Thailand, Cambodia, the Philippines, and Mauritius, as well as many in North America and Europe.

Lunar New Year is associated with several myths and customs. The festival was traditionally a time to honour deities as well as ancestors. Within China, regional customs and traditions concerning the celebration of the New Year vary widely, and the evening preceding Lunar New Year’s Day is frequently regarded as an occasion for Chinese families to gather for the annual reunion dinner. It is also traditional for every family to thoroughly clean their house, in order to sweep away any ill-fortune and to make way for incoming good luck. Another custom is the decoration of windows and doors with red paper-cuts and couplets. Popular themes among these paper-cuts and couplets include that of good fortune or happiness, wealth, and longevity. Other activities include lighting firecrackers and giving money in red paper envelopes. For the northern regions of China, dumplings are featured prominently in meals celebrating the festival. It often serves as the first meal of the year either at midnight or as breakfast of the first day.

Year of the Ox

The ox of the Chinese zodiac has a long history. In Chinese mythology, there are many myths about the oxen or ox-like beings, including both celestial and earthly beings. The myths range from ones which include oxen or composite beings with ox characteristics as major actors to ones which focus on human or divine actors, in which the role of the oxen are more subsidiary. In some cases, Chinese myths focus on oxen-related subjects, such as plowing and agriculture or ox-powered carriage. Another important role for beef cattle is in the religious capacity of sacrificial offerings. Chinese mythology intersects with the idea of the zodiacal ox.

According to some old mythological traditions there was race held by a great deity to determine which creatures, in which order, would be the namesakes of the twelve-year cycle. The race was run, and swum, the finishing line being across a great river. The Rat and the Ox crossed easily enough, the Ox due to being large, powerful, and adept both on land and in water: the Rat asked the good-natured Ox for a ride on its back, but then ungratefully jumped off at the last minute to cross the finish line first.

In the Vietnamese zodiac, the water buffalo occupies the position of the Ox. In Nepal, the Tamu/Gurung people celebrate the year of the cow.