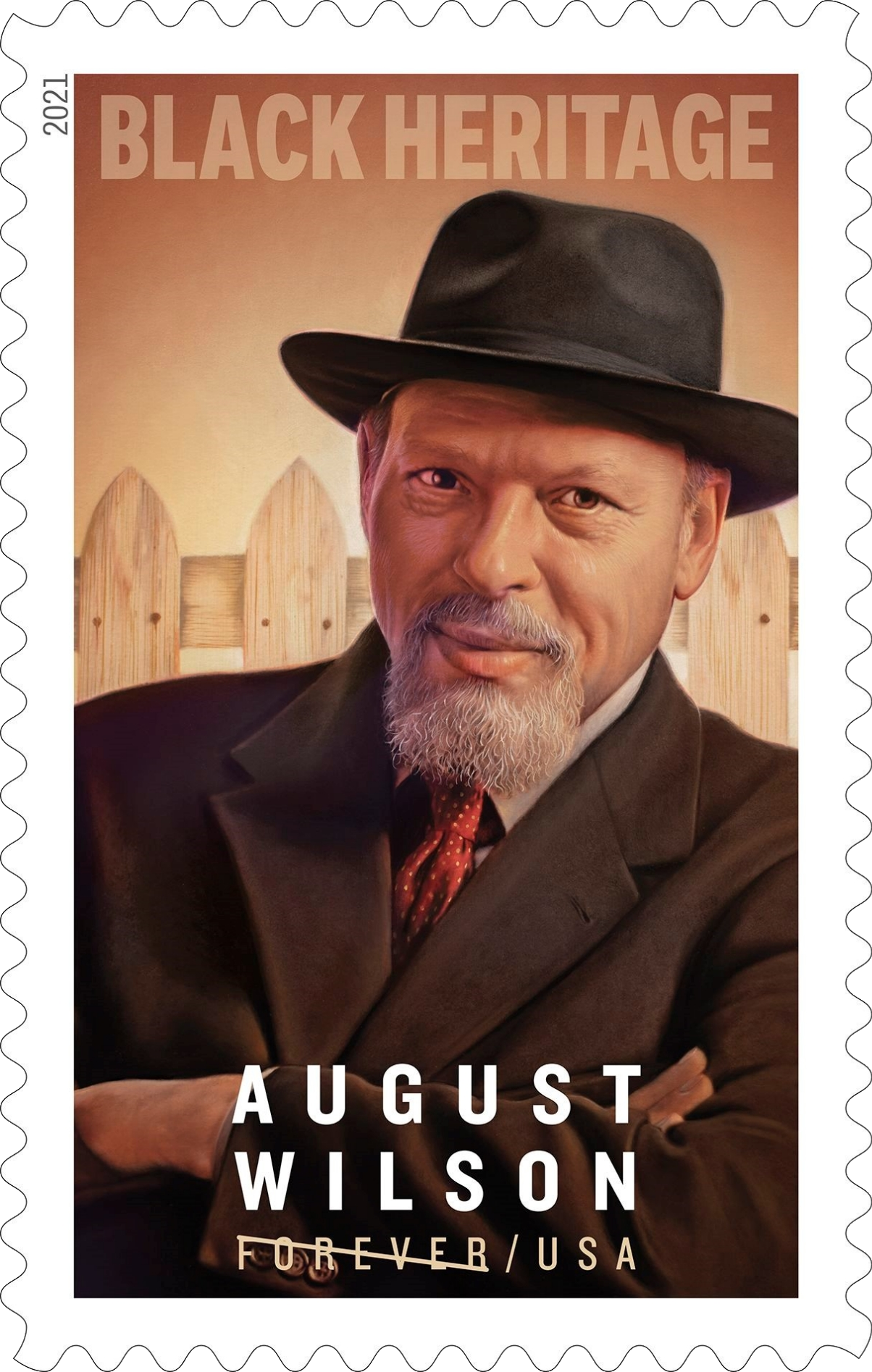 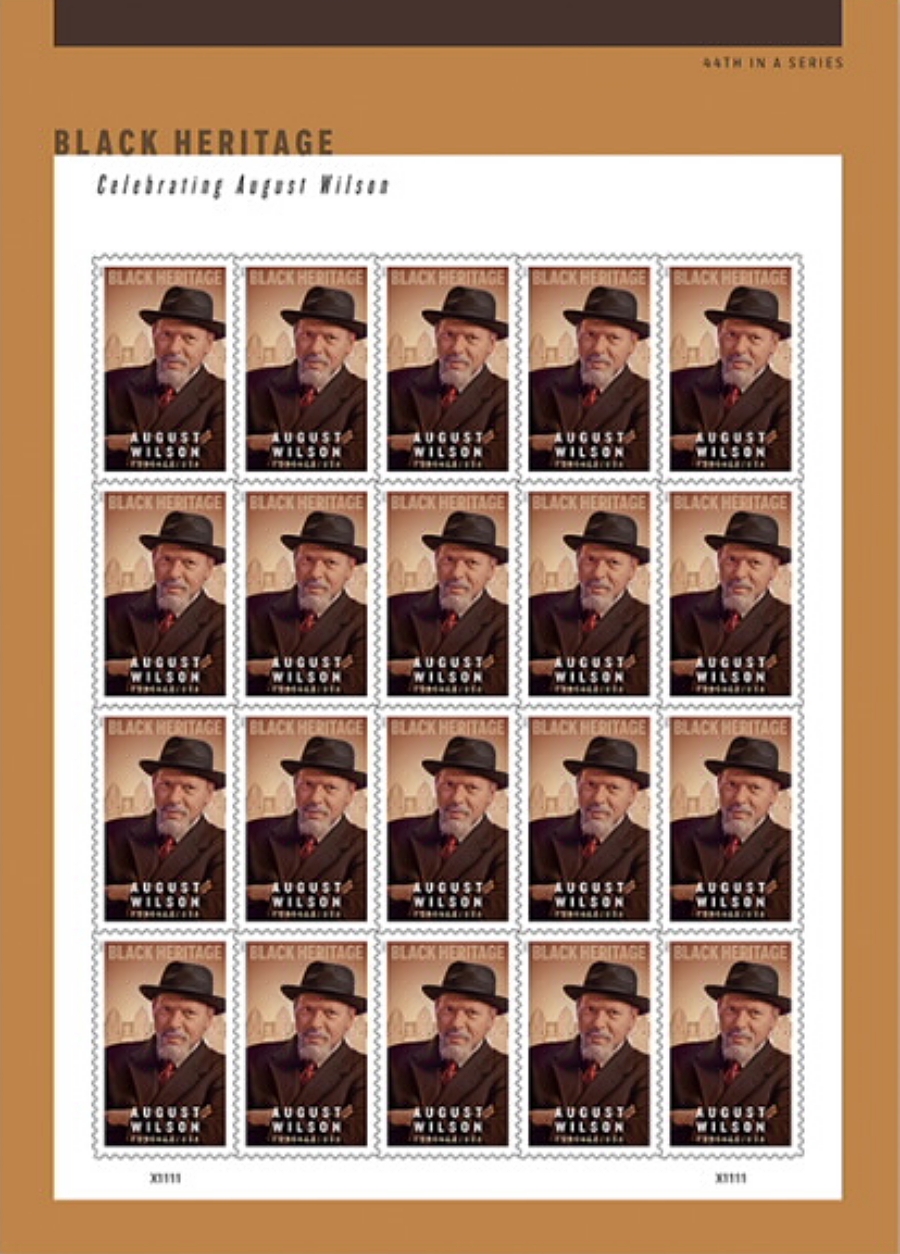 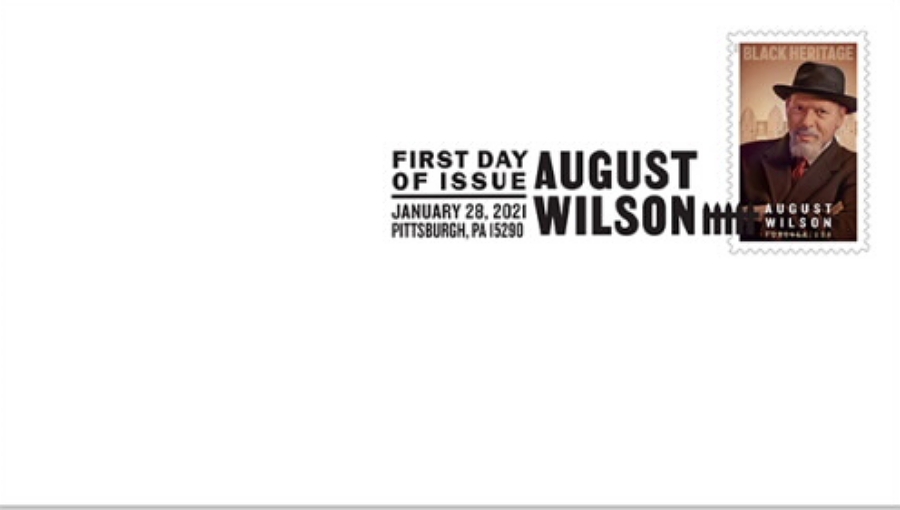 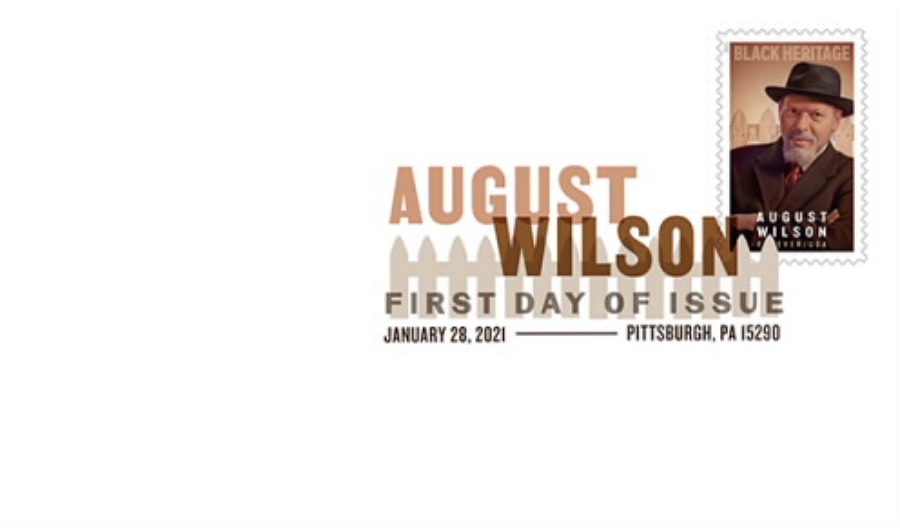 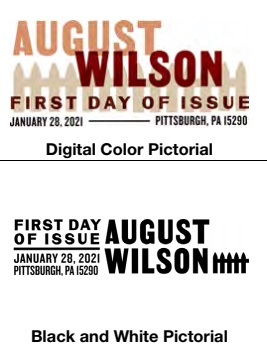 On January 28, 2021, in Pittsburgh, PA, the United States Postal Service® will issue the August Wilson stamp (Forever® priced at the First-Class Mail® rate) in one design, in a pressure-sensitive adhesive (PSA) pane of 20 stamps (Item 480000). This stamp will go on sale nationwide January 28, 2021, and must not be sold or canceled before the first-day-of-issue.

The 44th stamp in the Black Heritage® series honors playwright August Wilson (1945–2005), who brought fresh perspectives and previously unheard voices to the American stage. This stamp features an oil painting of Wilson based on a 2005 photograph. Behind Wilson, a picket fence alludes to the title of Fences, one of his best-known plays. Art director Ethel Kessler designed the stamp with art by Tim O’Brien.

Only the following pictorial postmark is permitted for the August Wilson stamp. The word “Station” or the abbreviation “STA” is required somewhere in the design because it will be a temporary station. Use of any image other than the following special pictorial image is prohibited.

To finalize the August Wilson stamp pictorial postmark art, insert the date, city, state, and ZIP Code™ of the physical location of your event adjacent to the stamp image. Overall dimensions of the pictorial postmark must not exceed 4 inches (horizontally) by 2 inches (vertically). Collectors prefer the dimensions 3-1/2 inches by 1 inch.

The Postal Service™ must make all special postmarks known to collectors through advance publicity in the Postal Bulletin. Therefore, all special dedication cancellations must be reported to Stamp Services 4 weeks before the event using PS Form 413, Pictorial Postmark Announcement/Report. To get a copy of the form, go to blue.usps.gov/formmgmt/forms/ps413.pdf.

How to Order the First-Day-of-Issue Postmark

Customers have 120 days to obtain the first-day-of-issue postmark by mail. They may purchase new stamps at their local Post Office™ or at The Postal Store® website at usps.com/shop. They must affix the stamps to envelopes of their choice, address the envelopes (to themselves or others), and place them in a larger envelope addressed to:

After applying the first-day-of-issue postmark, the Postal Service will return the envelopes through the mail. There is no charge for the postmark up to a quantity of 50. There is a 5-cent charge for each additional postmark over 50. All orders must be postmarked by May 28, 2021.

How to Order First-Day Covers

The Postal Service also offers first-day covers for new stamp issues and Postal Service stationery items postmarked with the official first-day-of-issue cancellation. Each item has an individual catalog number and is offered in the USA Philatelic catalog and online at usps.com/shop. Customers may register to receive a free USA Philatelic catalog online at usps.com/philatelic .

August Wilson (April 27, 1945 – October 2, 2005) was an American playwright. He has been referred to as the “theater’s poet of black America”. He is best known for a series of ten plays collectively called The Pittsburgh Cycle, which chronicle the experiences and heritage of the African-American community in the 20th century. Plays in the series include, Jitney (1982), Fences (1984), Ma Rainey’s Black Bottom (1984), Joe Turner’s Come and Gone (1986), The Piano Lesson (1987), King Hedley II (1999). Two of his plays received the Pulitzer Prize for Drama, and two of his other works won the Tony Award for Best Play. In 2006 Wilson was inducted into the American Theatre Hall of Fame.

His works delve into the African American experience as well as examinations of the human condition. Other themes have ranged from the systemic and historical exploitation of African Americans, as well as race relations, identity, migration, and racial discrimination. His work has drawn several iconic performances onstage from James Earl Jones, Denzel Washington, Viola Davis, Angela Bassett, Laurence Fishburne, and Samuel L. Jackson. Davis described Wilson’s writing by saying, “He captures our humor, our vulnerabilities, our tragedies, our trauma. And he humanizes us. And he allows us to talk.” Since Wilson’s death two of his plays have been adapted into films, Fences (2016), and Ma Rainey’s Black Bottom (2020). Denzel Washington has shepherded the films and has vowed to continue his legacy by adapting the rest of his plays into films for a wider audience by saying, “The greatest part of what’s left of my career is making sure that August is taken care of”.

While the work of August Wilson is not formally recognized within the literary canon of the Black Arts Movement, he was certainly a product of its mission, helping to co-found the Black Horizon Theatre in his hometown of Pittsburgh in 1968. Situated in Pittsburgh’s Hill District, a historically and predominantly Black neighborhood, the Black Horizon Theatre became a cultural hub of Black creativity and community building. As a playwright of what is considered the Post–Black Arts Movement, August Wilson inherited the spirit of BAM, producing plays that celebrated the history and poetic sensibilities of Black people. His iconic Century Cycle successfully tracked and synthesized the experiences of Black America in the 20th Century, using each historical decade, from 1904 to 1997, to document the physical, emotional, mental, and political strivings of Black life in the wake of emancipation.