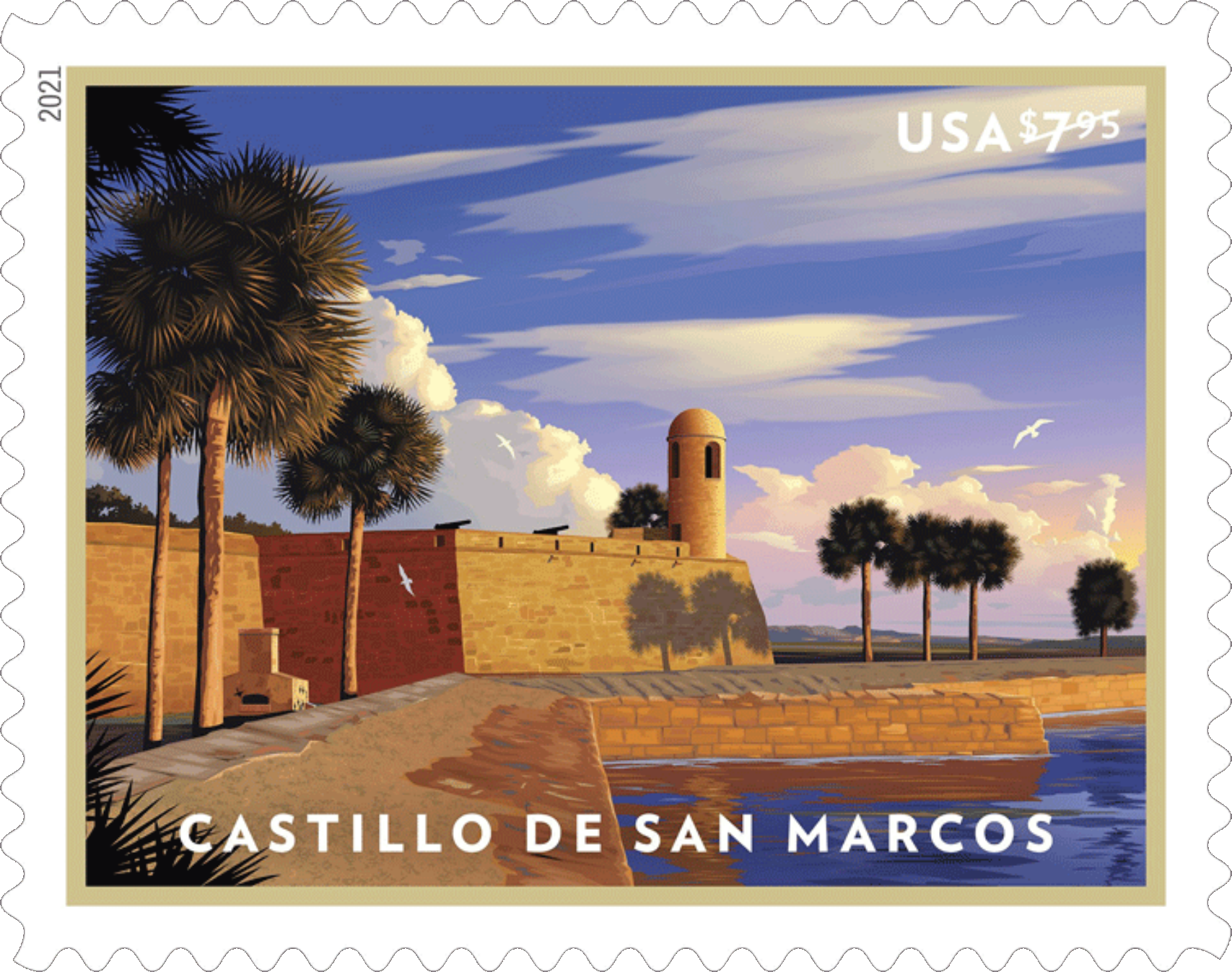 Details to be announced soon 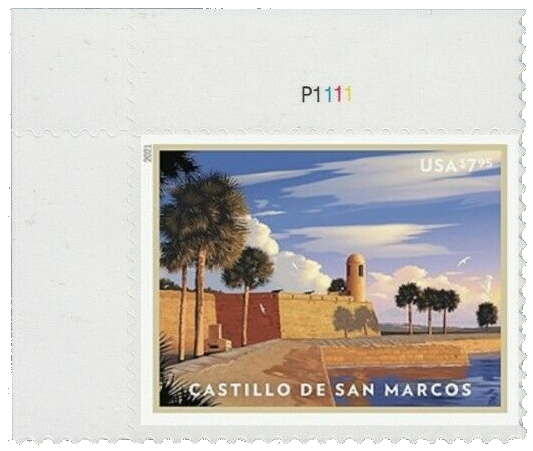 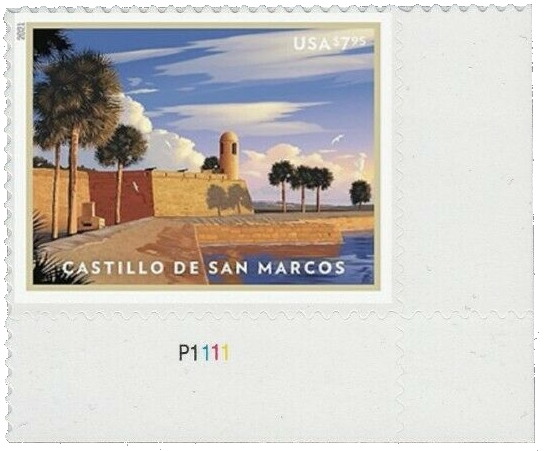 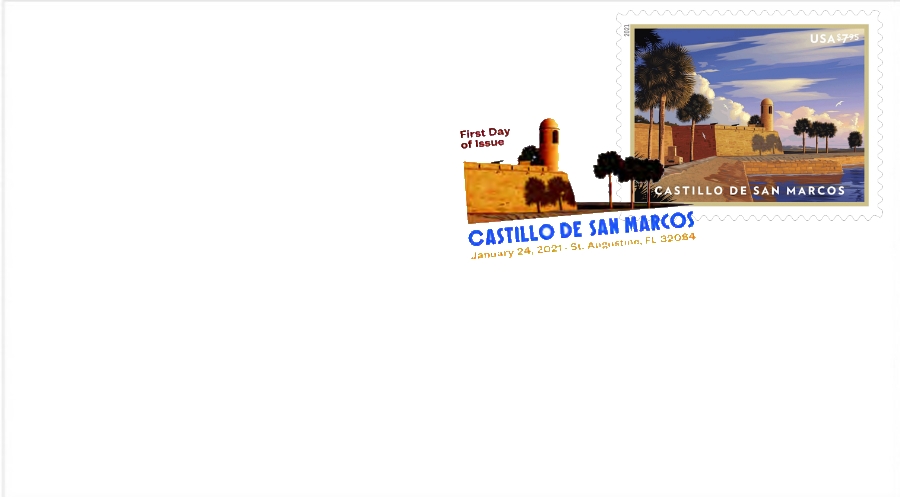 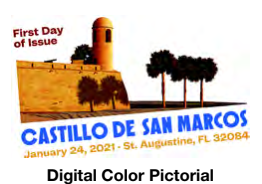 On January 24, 2021, in St. Augustine, FL, the United States Postal Service® will issue the Castillo de San Marcos Priority Mail® stamp in one design, in a pressure-sensitive adhesive (PSA) pane of four stamps (Item 121300). This stamp will go on sale nationwide January 24, 2021, and must not be sold or canceled before the first-day-of-issue.

The latest Priority Mail stamp celebrates the oldest masonry fortification in the United States, the Castillo de San Marcos, in St. Augustine, Florida. The stamp art features a digital illustration of the fortress based on a contemporary photograph. With a view toward the northeast corner of the fortress, the artwork captures it in the golden glow of sunrise over Matanzas Bay. Art director Greg Breeding designed the stamp with art created by Dan Cosgrove.

How to Order the First-Day-of-Issue Postmark
Customers have 120 days to obtain the first-day-of-issue postmark by mail. They may purchase new stamps at their local Post Office™ or at The Postal Store® website at usps.com/shop. They must affix the stamps to envelopes of their choice, address the envelopes (to themselves or others), and place them in a larger envelope addressed to:

How to Order First-Day Covers
The Postal Service also offers first-day covers for new stamp issues and Postal Service stationery items postmarked with the official first-day-of-issue cancellation. Each item has an individual catalog number and is offered in the USA Philatelic catalog and online at usps.com/shop. Customers may register to receive a free USA Philatelic catalog online at usps.com/philatelic.

Technical details for the Castillo de San Marcos stamp will appear in a future edition of the Postal Bulletin.

According to the Virtual Stamp Club regarding the Priority Mail Flat Rate Envelope utilizing this design:

“Nothing has been announced, but if past practice holds, a stamped flat-rate envelopes featuring the same design as the new Priority Mail stamp will be issued for this rate on Sunday, January 24, 2021, the date the rate goes into effect. There will not be a first day ceremony and in-person cancellations will be hard to obtain.”

The Castillo de San Marcos (Spanish for “St. Mark’s Castle”) is the oldest masonry fort in the continental United States; it is located on the western shore of Matanzas Bay in the city of St. Augustine, Florida. The Castillo was designed by the Spanish engineer Ignacio Daza, with construction beginning in 1672, 107 years after the city’s founding by Spanish Admiral and conquistador Pedro Menéndez de Avilés, when Florida was part of the Spanish Empire. The fort’s construction was ordered by Governor Francisco de la Guerra y de la Vega after a raid by the English privateer Robert Searles in 1668 that destroyed much of St. Augustine and damaged the existing wooden fort. Work proceeded under the administration of Guerra’s successor, Manuel de Cendoya in 1671, and the first coquina stones were laid in 1672. The construction of the core of the current fortress was completed in 1695, though it would undergo many alterations and renovations over the centuries.

When Britain gained control of Florida in 1763 pursuant to the Treaty of Paris, St. Augustine became the capital of British East Florida, and the fort was renamed Fort St. Mark[8] until the Peace of Paris (1783) when Florida was transferred back to Spain and the fort’s original name restored. In 1819, Spain signed the Adams–Onís Treaty which ceded Florida to the United States in 1821; consequently the fort was designated a United States Army base and renamed Fort Marion, in honor of American Revolutionary War hero Francis Marion. The fort was declared a National Monument in 1924, and after 251 years of continuous military possession, was deactivated in 1933. The 20.48-acre (8.29 ha) site was subsequently turned over to the United States National Park Service. In 1942 the original name, Castillo de San Marcos, was restored by an Act of Congress.

Castillo de San Marcos was attacked several times and twice besieged: first by English colonial forces led by Carolina Colony Governor James Moore in 1702, and then by English Georgia colonial Governor James Oglethorpe in 1740, but was never taken by force. However, possession of the fort has changed six times, all peaceful, among four different governments: Spain, 1695–1763 and 1783–1821, Kingdom of Great Britain, 1763–1783, and the United States of America, 1821–date (during 1861–1865, under control of the Confederate States of America).

Under United States control the fort was used as a military prison to incarcerate members of Native American tribes starting with the Seminole—including the famous war chief, Osceola, in the Second Seminole War—and members of western tribes, including Geronimo’s band of Chiricahua Apache. The Native American art form known as Ledger Art had its origins at the fort during the imprisonment of members of the Plains tribes such as Howling Wolf of the southern Cheyenne.

Ownership of the Castillo was transferred to the National Park Service in 1933, and it has been a popular tourist destination since then.

The European city of St. Augustine was founded by the admiral Pedro Menéndez de Avilés for the Spanish Crown in 1565 on the site of a former Native American village called Seloy. The need for fortifications was recognized after it was attacked by Sir Francis Drake and his fleet of 22 ships in 1586, and over the next 80 years, a succession of nine wooden forts were built in various locations along the coastline. However, after a 1668 attack by the English pirate Robert Searle during which the town of St. Augustine was burned to the ground, wooden forts were deemed inadequate, and Mariana, Queen Regent of Spain, approved the construction of a masonry fortification to protect the city.

The Castillo is a masonry star fort made of a stone called coquina (Spanish for “small shells”), which consists of ancient shells that have bonded together to form a sedimentary rock similar to limestone. Native Americans from Spain’s nearby missions did most of the labor, with additional skilled workers brought in from Havana, Cuba. The coquina was quarried from the ‘King’s Quarry’ on Anastasia Island in what is today Anastasia State Park across Matanzas Bay from the Castillo, and ferried across to the construction site. Construction began on October 2, 1672, and lasted twenty-three years, with completion in 1695.

The fort has four bastions named San Pedro, San Agustín, San Carlos and San Pablo with a ravelin protecting the sally port. On the two landward sides a large glacis was constructed which would force any attackers to advance upward toward the fort’s cannon and allow the cannon shot to proceed downslope for greater efficiency in hitting multiple targets. Also the artificial mound of the glacis in front of the walls helped to protect them from direct cannon fire attempting to breach them in a siege. Immediately surrounding the fort was a moat which was usually kept dry, but that could be flooded with seawater to a depth of about a foot in case of attack by land.