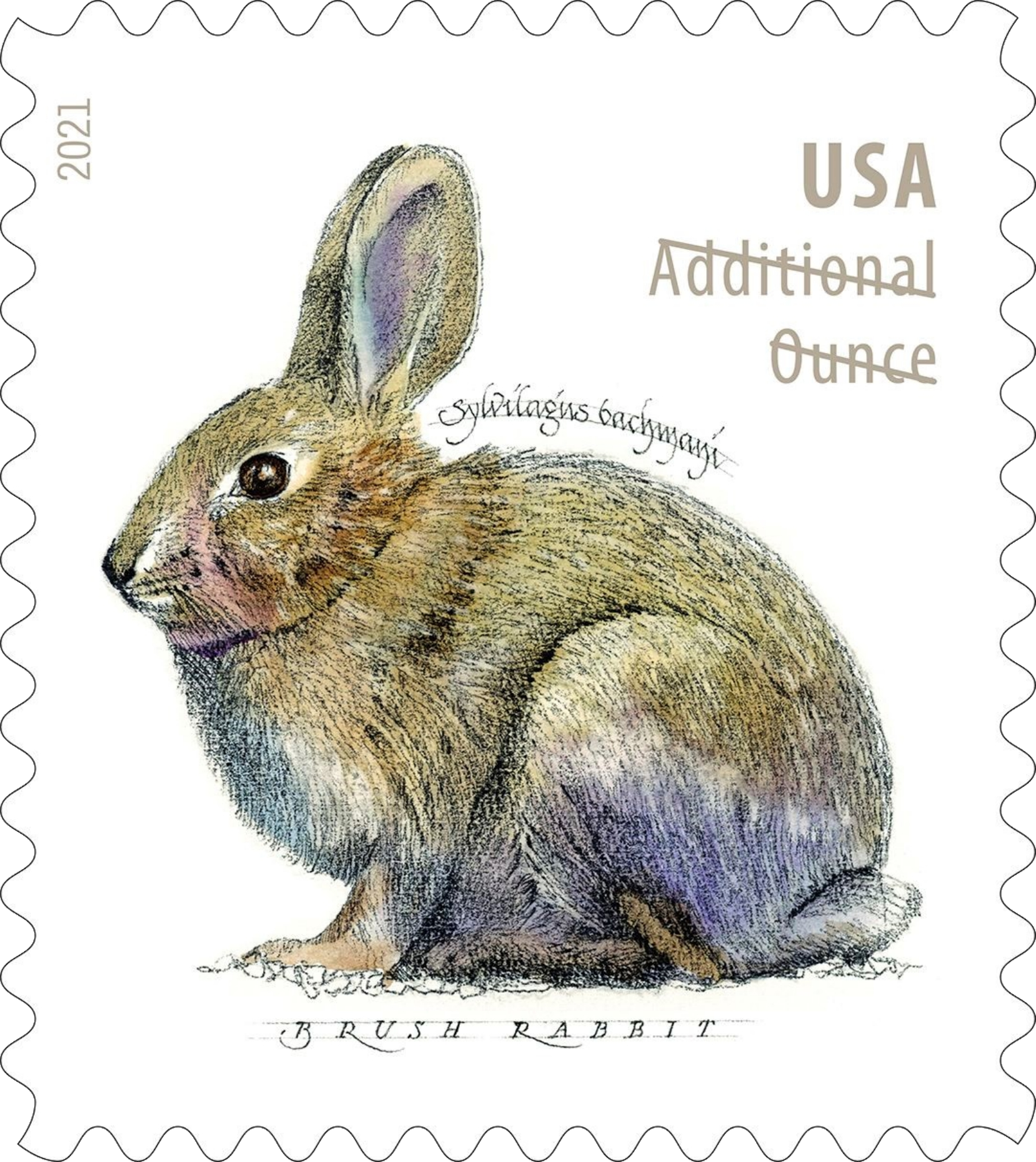 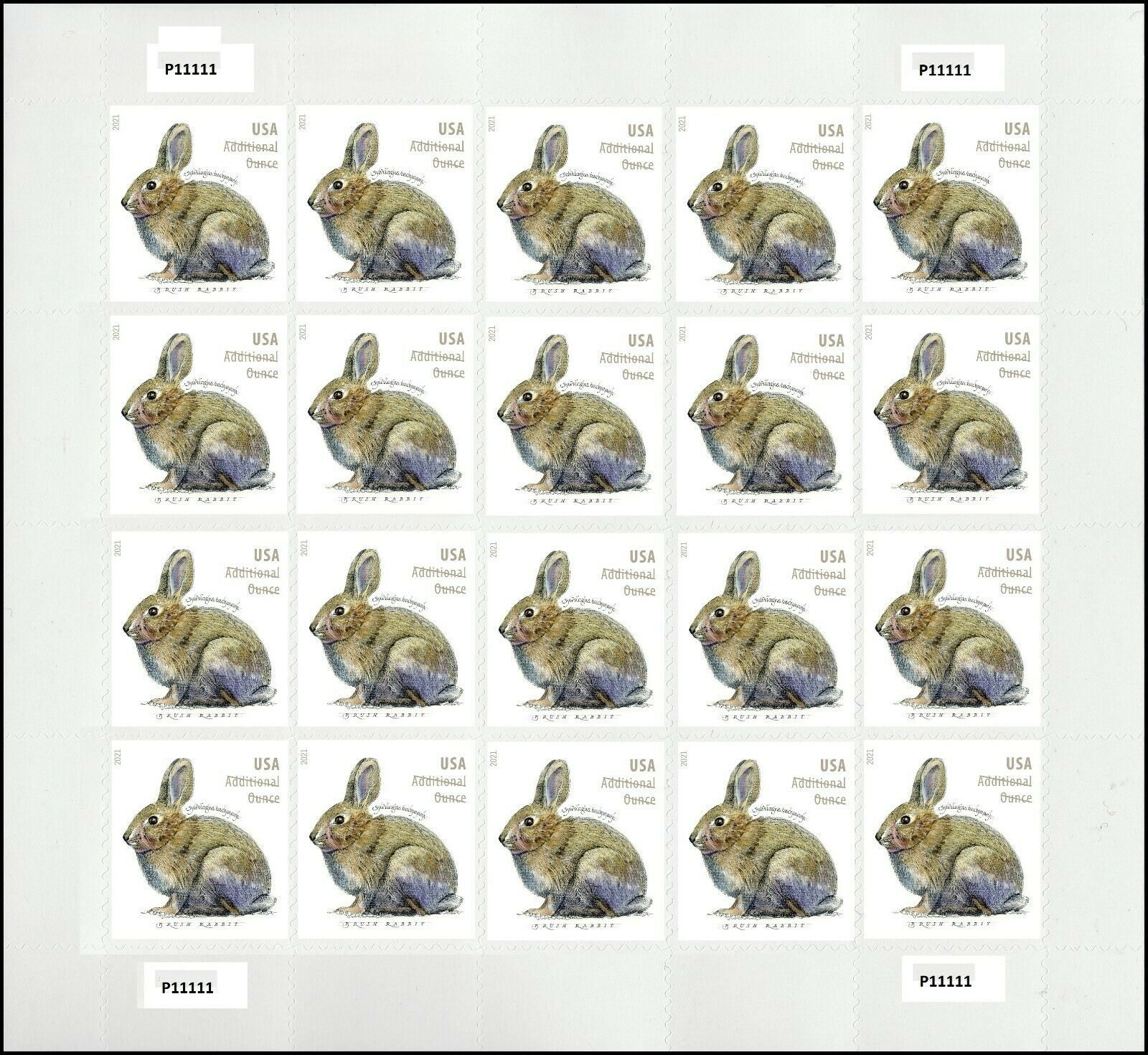 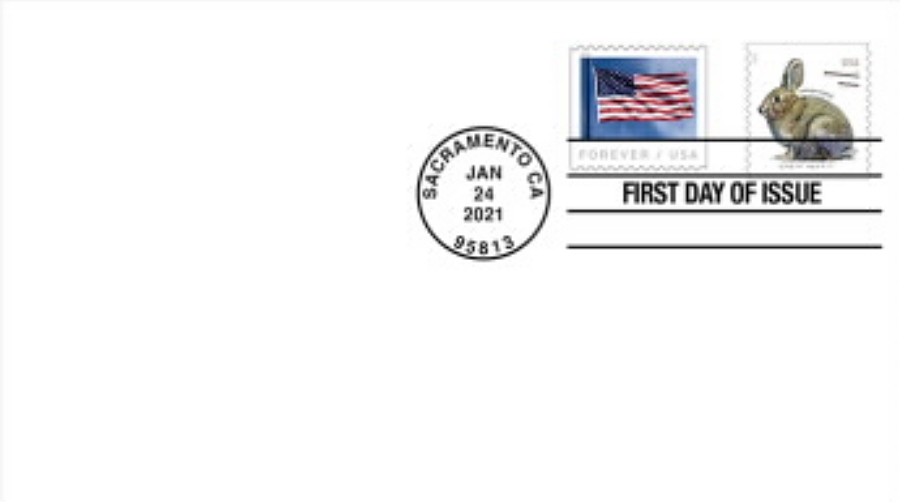 On January 24, 2021, in Sacramento, CA, the United States Postal Service® will issue the Brush Rabbit stamp (Non-denominated Additional Ounce Rate) in one design, in a pressure-sensitive adhesive (PSA) pane of 20 stamps (Item 121100) and a PSA coil of 100 stamps (Item 740300). This stamp will go on sale nationwide January 24, 2021, and must not be sold or canceled before the first-day-of-issue.

How to Order the First-Day-of-Issue Postmark
Customers have 120 days to obtain the first-day-of-issue postmark by mail. Each cover must have sufficient postage to meet First-Class Mail® requirements. They may purchase new stamps at their local Post Office™ or at The Postal Store® website at usps.com/shop. They must affix the stamps to envelopes of their choice, address the envelopes (to themselves or others), and place them in a larger envelope addressed to:

How to Order First-Day Covers
The Postal Service also offers first-day covers for new stamp issues and Postal Service stationery items postmarked with the official first-day-of-issue cancellation. Each item has an individual catalog number and is offered in the USA Philatelic catalog and online at usps.com/shop. Customers may register to receive a free USA Philatelic catalog online at usps.com/philatelic.

The brush rabbit (Sylvilagus bachmani), or western brush rabbit, or Californian brush rabbit, is a species of cottontail rabbit found in western coastal regions of North America, from the Columbia River in Oregon to the southern tip of the Baja California Peninsula. Its range extends as far east as the eastern sides of the Sierra Nevada and Cascade mountain ranges.

The brush rabbit is a small rabbit with short legs and a short tail. It is dark gray on the sides and back, and pale gray on the belly and the underside of the tail. The whiskers are mostly black, although some have white tips. Adult rabbits measure anywhere from 303 to 369 mm (11.9 to 14.5 inches) in length, and range in weight from 511 to 917 grams (18 to 32 ounces).

It has been noted that numbers of the eastern cottontail were brought west to reproduce and provide a food source for the settlers. The interbreeding of the two species has occurred where the Brush Rabbit has in parts of Oregon developed the white cottontail although retaining its smaller size.

Brush rabbits require dense bramble clumps or other thick brushy habitat. These bramble clumps often have extensive networks of trails and runways. The species will occasionally use burrows made by other species, but does not dig its own. The home range is very small, less than 2000 square meters.

Brush rabbits most commonly live in chaparral vegetation, but are also found in oak and conifer habitats. In the San Francisco Bay Area, it was found that the brush rabbit concentrates its activities at the edge of brush and exhibits much less use of grassy areas. It uses the interior brush of the wilderness and it was also found that this may be a better environment for it than the chaparral one. Studies done on the brush rabbit in Oregon also showed that it rarely left the brushy areas it inhabits. Brush may be used more in the drier seasons while grasses are used in the wetter seasons in relation to growth of annual vegetation. Use of habitat also probably is related to the breeding season.

he brush rabbit is not hunted as are many other cottontail species, probably because of its small size. It is not a major cause of damage to crops or other human developments in its habitat.

While the overall population of brush rabbits is stable, one of its subspecies, the riparian brush rabbit (Sylvilagus bachmani riparius), is listed as an endangered species by the USFWS. Formerly numerous along the San Joaquin River and Stanislaus River, it is now reduced to a population of a few hundred in the Caswell Memorial State Park and is being reintroduced to the adjacent San Joaquin River National Wildlife Refuge in the San Joaquin Valley, California. This population has been negatively impacted by ongoing riparian habitat destruction.