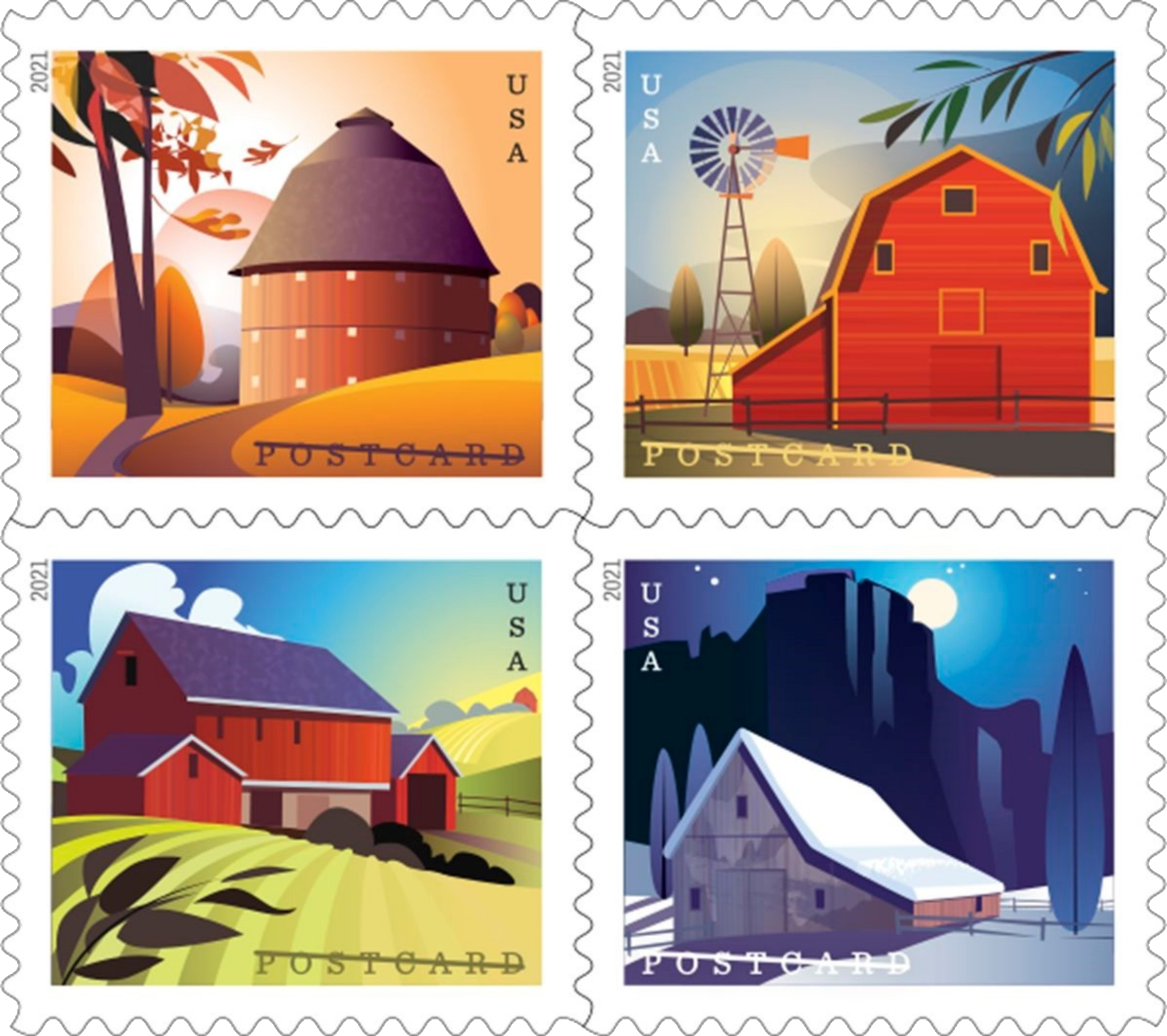 Round Barn in Fall 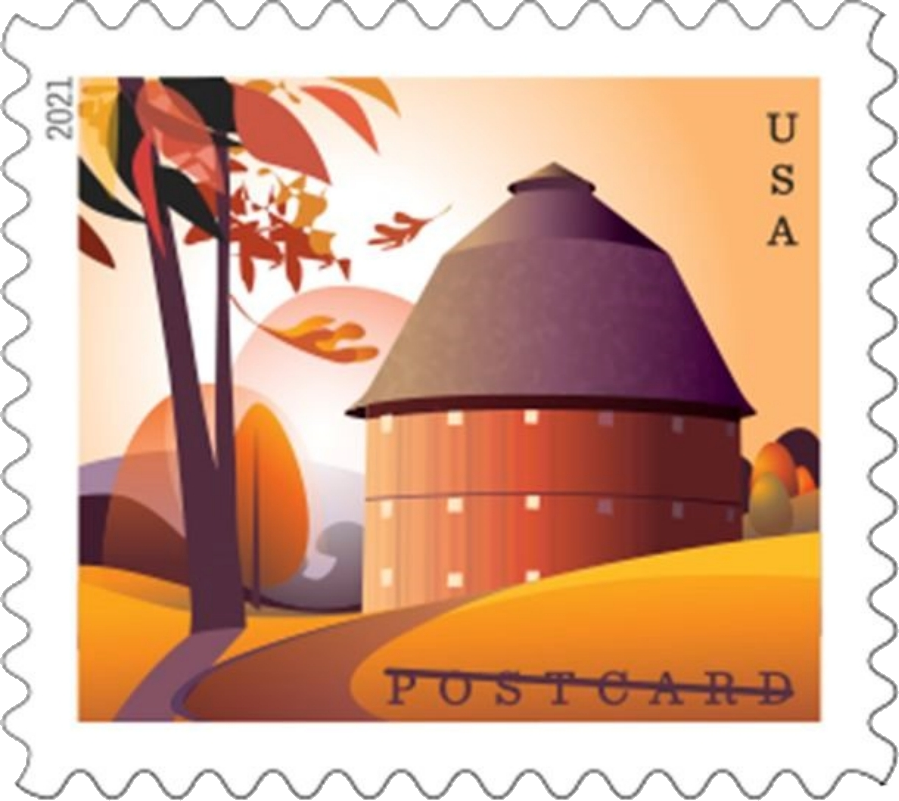 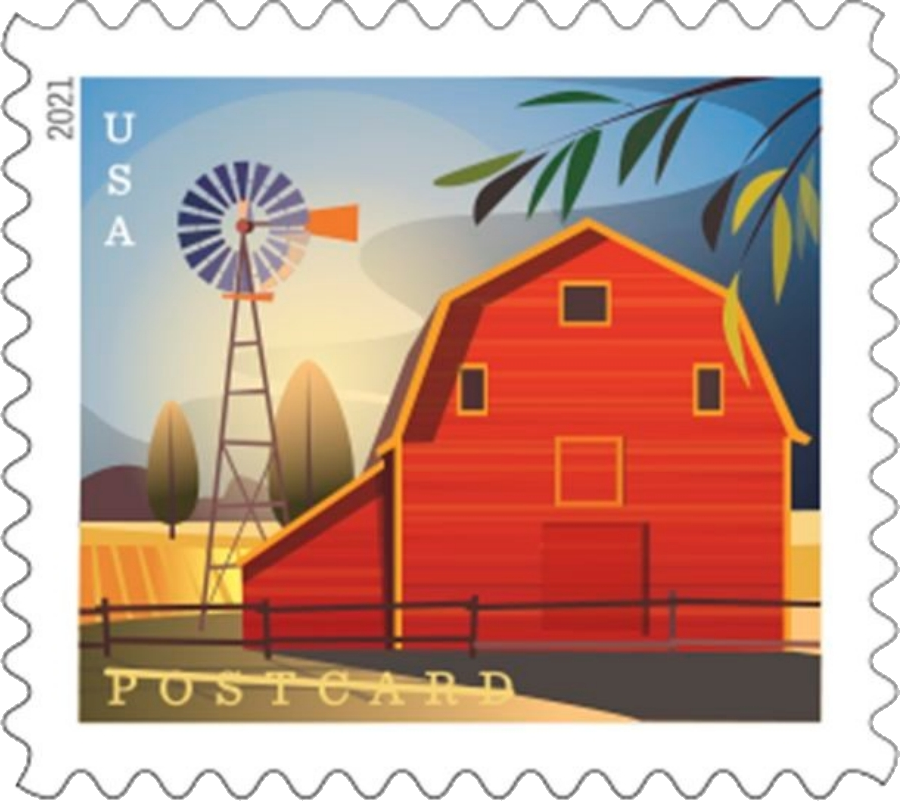 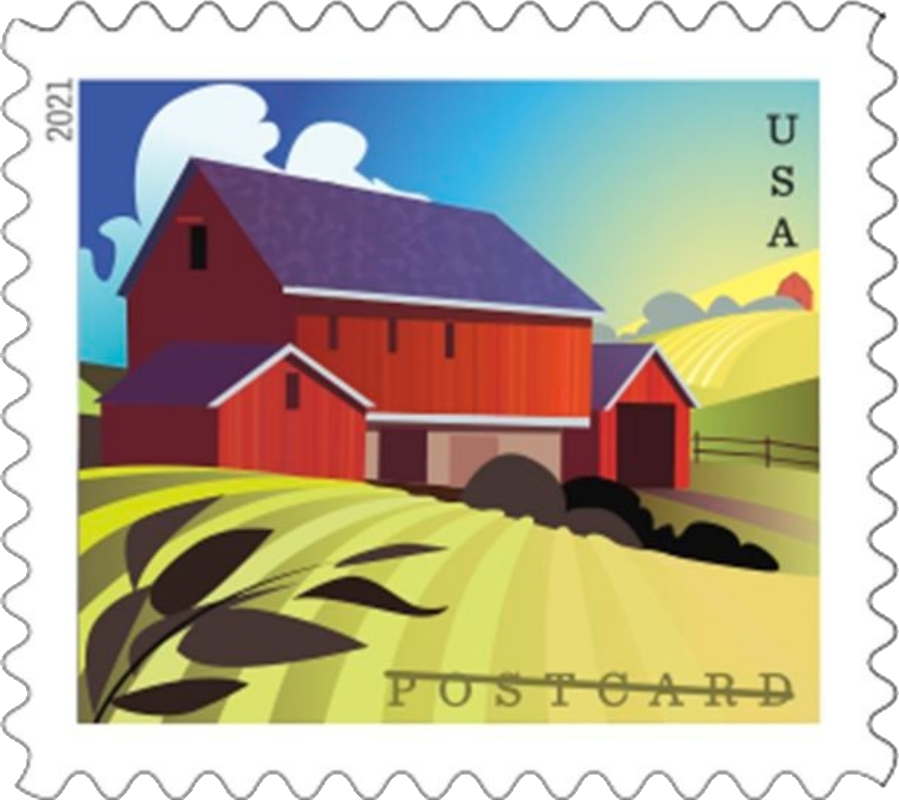 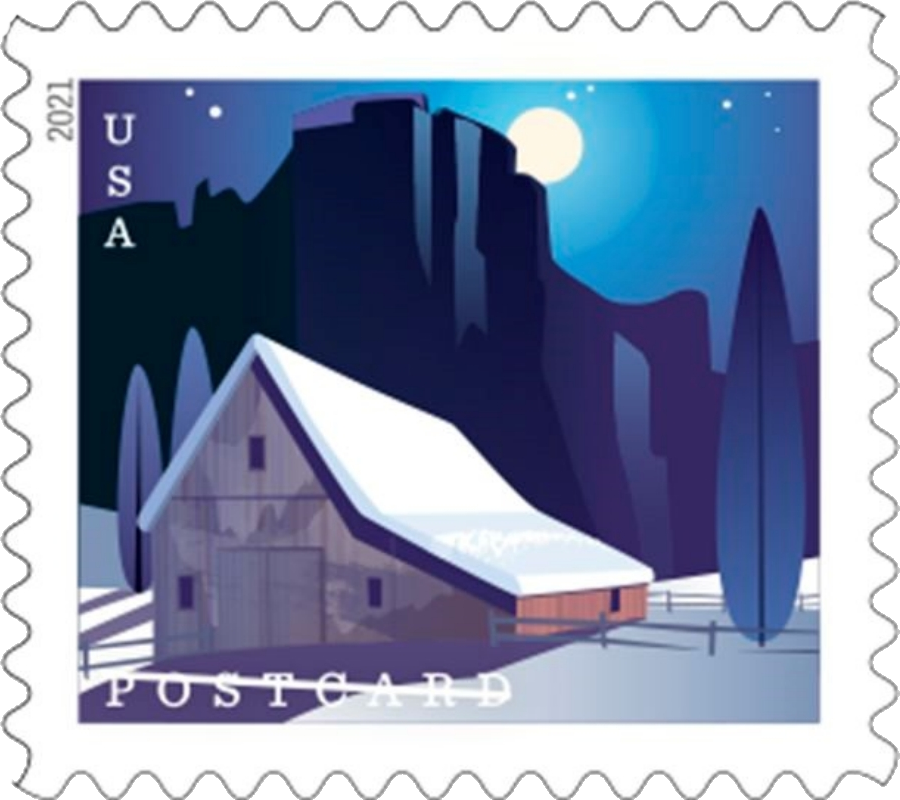 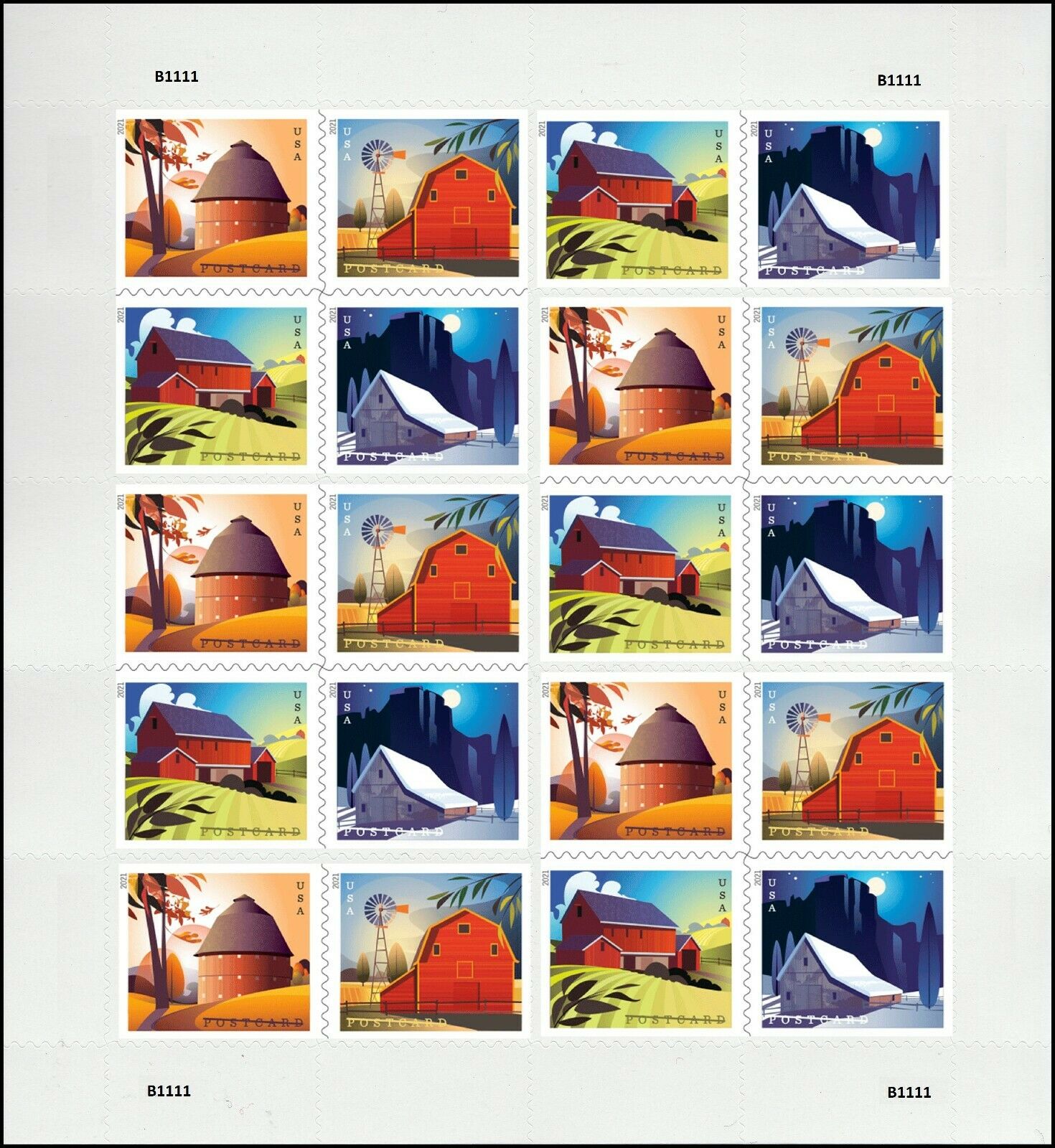 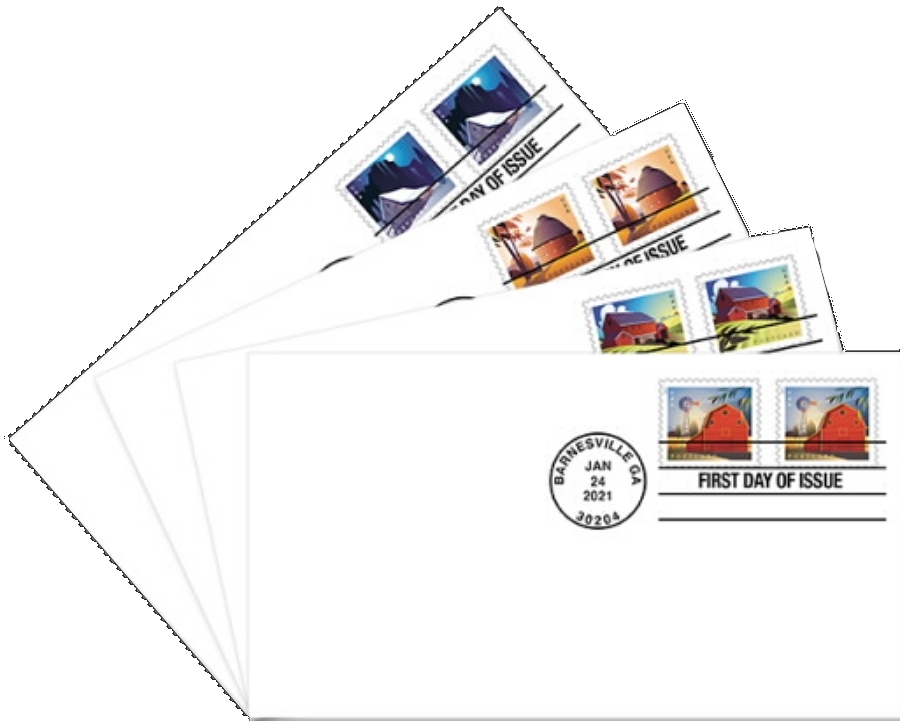 On January 24, 2021, in Barnesville, GA, the United States Postal Service® will issue the Barns stamps (Non-denominated priced at the Postcard rate) in 4 designs, in a pressure-sensitive adhesive (PSA) pane of 20 stamps (Item 120900) and a PSA coil of 100 stamps (Item 740200). The stamps will go on sale nationwide January 24, 2021, and must not be sold or canceled before the first-day-of-issue.

Four new postcard stamps celebrate the beauty and history of American barns. The artist created digital paintings of four types of iconic barns found in the rural American landscape. With differing qualities of light and color, each piece reflects one of the four seasons:

How to Order the First-Day-of-Issue Postmark
Customers have 120 days to obtain the first-day-of-issue postmark by mail. Each cover must have sufficient postage to meet First-Class Mail® requirements. They may purchase new stamps at their local Post Office™ or at The Postal Store® website at usps.com/shop. They must affix the stamps to envelopes of their choice, address the envelopes (to themselves or others), and place them in a larger envelope addressed to:

How to Order First-Day Covers
The Postal Service also offers first-day covers for new stamp issues and Postal Service stationery items postmarked with the official first-day-of-issue cancellation. Each item has an individual catalog number and is offered in the USA Philatelic publication and online at usps.com/shop. Customers may register to receive a free USA Philatelic publication online at usps.com/philatelic.

A barn is an agricultural building usually on farms and used for various purposes. In the North American area, a barn refers to structures that house livestock, including cattle and horses, as well as equipment and fodder, and often grain. As a result, the term barn is often qualified e.g. tobacco barn, dairy barn, sheep barn, potato barn. In the British Isles, the term barn is restricted mainly to storage structures for unthreshed cereals and fodder, the terms byre or shippon being applied to cow shelters, whereas horses are kept in buildings known as stables. In mainland Europe, however, barns were often part of integrated structures known as byre-dwellings (or housebarns in US literature). In addition, barns may be used for equipment storage, as a covered workplace, and for activities such as threshing.

The word barn comes from the Old English lang|ang|bere, for barley (or grain in general), and aern, for a storage place — thus, a storehouse for barley. The word bere-ern, also spelled bern and bearn, is attested to at least sixty times in homilies and other Old English prose. The related words bere-tun and bere-flor both meant threshing floor. Bere-tun also meant granary; the literal translation of bere-tun is “grain enclosure”. While the only literary attestation of bere-hus (also granary) comes from the Dialogi of Gregory the Great, there are four known mentions of bere-tun and two of bere-flor. A Thesaurus of Old English lists bere-ærn and melu-hudern (“meal-store house”) as synonyms for barn.

The modern barn largely developed from the three aisled medieval barn, commonly known as tithe barn or monastic barn. This, in turn, originated in a 12th-century building tradition, also applied in halls and ecclesiastical buildings. In the 15th century several thousands of these huge barns were to be found in Western-Europe. In the course of time, its construction method was adopted by normal farms and it gradually spread to simpler buildings and other rural areas. As a rule, the aisled barn had large entrance doors and a passage corridor for loaded wagons. The storage floors between the central posts or in the aisles were known as bays or mows (from Middle French moye).

The main types were large barns with sideway passages, compact barns with a central entrance and smaller barns with a transverse passage. The latter also spread to Eastern Europe. Whenever stone walls were applied, the aisled timber frame often gave way to single-naved buildings. A special type were byre-dwellings, which included living quarters, byres and stables, such as the Frisian farmhouse or Gulf house and the Black Forest house. Not all, however, evolved from the medieval barn. Other types descended from the prehistoric longhouse or other building traditions. One of the latter was the Low German (hall) house, in which the harvest was stored in the attic. In many cases, the New World colonial barn evolved from the Low German house, which was transformed to a real barn by first generation colonists from the Netherlands and Germany.

In the U.S., older barns were built from timbers hewn from trees on the farm and built as a log crib barn or timber frame, although stone barns were sometimes built in areas where stone was a cheaper building material. In the mid to late 19th century in the U.S. barn framing methods began to shift away from traditional timber framing to “truss framed” or “plank framed” buildings. Truss or plank framed barns reduced the number of timbers instead using dimensional lumber for the rafters, joists, and sometimes the trusses. The joints began to become bolted or nailed instead of being mortised and tenoned. The inventor and patentee of the Jennings Barn claimed his design used less lumber, less work, less time, and less cost to build and were durable and provided more room for hay storage. Mechanization on the farm, better transportation infrastructure, and new technology like a hay fork mounted on a track contributed to a need for larger, more open barns, sawmills using steam power could produce smaller pieces of lumber affordably, and machine cut nails were much less expensive than hand-made (wrought) nails. Concrete block began to be used for barns in the early 20th century in the U.S.

Modern barns are more typically steel buildings. From about 1900 to 1940, many large dairy barns were built in northern USA. These commonly have gambrel or hip roofs to maximize the size of the hay loft above the dairy roof, and have become associated in the popular image of a dairy farm. The barns that were common to the wheatbelt held large numbers of pulling horses such as Clydesdales or Percherons. These large wooden barns, especially when filled with hay, could make spectacular fires that were usually total losses for the farmers. With the advent of balers it became possible to store hay and straw outdoors in stacks surrounded by a plowed fireguard. Many barns in the northern United States are painted barn red with a white trim. One possible reason for this is that ferric oxide, which is used to create red paint, was the cheapest and most readily available chemical for farmers in New England and nearby areas. Another possible reason is that ferric oxide acts a preservative and so painting a barn with it would help to protect the structure. The custom of painting barns in red with white trim is widely spread in Scandinavia. Especially in Sweden the Falu red with white trims is the traditional coloring of most wooden buildings.

With the popularity of tractors following World War II many barns were taken down or replaced with modern Quonset huts made of plywood or galvanized steel. Beef ranches and dairies began building smaller loftless barns often of Quonset huts or of steel walls on a treated wood frame (old telephone or power poles). By the 1960s it was found that cattle receive sufficient shelter from trees or wind fences (usually wooden slabs 20% open).