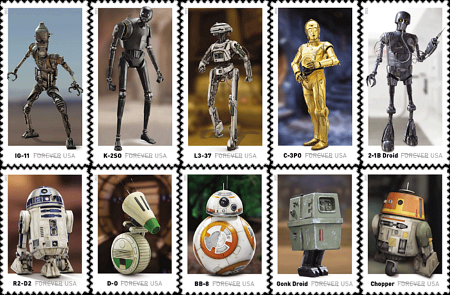 The USPS traces its roots to 1775 during the Second Continental Congress, when Benjamin Franklin was appointed the first postmaster general. The Post Office Department was created in 1792 with the passage of the Postal Service Act. It was elevated to a cabinet-level department in 1872, and was transformed by the Postal Reorganization Act of 1970 into the United States Postal Service as an independent agency. The act replaced the cabinet-level Post Office Department with a new federal agency, the United States Postal Service, and took effect on July 1, 1971. Since the early 1980s, many direct tax subsidies to the USPS (with the exception of subsidies for costs associated with disabled and overseas voters) have been reduced or eliminated.

The USPS, as of 2019, has 469,934 career employees and 136,174 non-career employees. The Postal Service is legally obligated to serve all Americans, regardless of geography, at uniform price and quality. The Post Office has exclusive access to letter boxes marked “U.S. Mail” and personal letterboxes in the United States, but has to compete against private package delivery services, such as United Parcel Service, FedEx, and Amazon.

The United States of America (USA), commonly known as the United States (U.S. or US), or America, is a country primarily located in North America, consisting of 50 states, a federal district, five major self-governing territories, and various possessions. At 3.8 million square miles (9.8 million square kilometers), it is the world’s third-largest country by total area (including coastal and territorial waters). With a population of over 328 million, it is the third most populous country in the world. The national capital is Washington, D.C., and the most populous city is New York City.

Paleo-Indians migrated from Siberia to the North American mainland at least 12,000 years ago, and European colonization began in the 16th century. The United States emerged from the thirteen British colonies established along the East Coast. Disputes over taxation and political representation with Great Britain led to the American Revolutionary War (1775–1783), which established independence. In the late 18th century, the U.S. began vigorously expanding across North America, gradually acquiring new territories, oftentimes killing and displacing Native Americans, and admitting new states; by 1848, the United States spanned the continent. Slavery was legal in the southern United States until the second half of the 19th century when the American Civil War led to its abolition. The Spanish–American War and World War I established the U.S. as a world power, a status confirmed by the outcome of World War II. During the Cold War, the United States and the Soviet Union engaged in various proxy wars but avoided direct military conflict. They also competed in the Space Race, culminating in the 1969 spaceflight that first landed humans on the Moon. The revolutions of 1989 in Central and Eastern Europe and the Soviet Union’s collapse in 1991 ended the Cold War. This left the United States as the world’s sole superpower, with immense authority in global geopolitics.

The United States is a federal republic and a representative democracy with three separate branches of government, including a bicameral legislature. It is a founding member of the United Nations, World Bank, International Monetary Fund, Organization of American States (OAS), NATO, and other international organizations. It is a permanent member of the United Nations Security Council. The U.S. ranks high in international measures of economic freedom, quality of life, and quality of higher education. Despite considerable income and wealth disparities compared to other rich countries, the United States continuously ranks high in measures of socioeconomic performance. It is also one of the most racially and ethnically diverse nations in the world, often called a melting pot of cultures and ethnicities. Its population has been profoundly shaped by centuries of immigration.

A highly developed country, the United States accounts for approximately a quarter of global gross domestic product (GDP) and is the world’s largest economy by nominal GDP. By value, the United States is the world’s largest importer and the second-largest exporter of goods. Although its population is only 4.2% of the world total, it holds 29.4% of the total wealth in the world, the largest share held by any country. Making up more than a third of global military spending, it is the foremost military power in the world and is a leading political, cultural, and scientific force internationally.

The flag of the United States of America, often referred to as the American flag or the U.S. flag, is the national flag of the United States. It consists of thirteen equal horizontal stripes of red (top and bottom) alternating with white, with a blue rectangle in the canton (referred to specifically as the “union”) bearing fifty small, white, five-pointed stars arranged in nine offset horizontal rows, where rows of six stars (top and bottom) alternate with rows of five stars. The 50 stars on the flag represent the 50 states of the United States of America, and the 13 stripes represent the thirteen British colonies that declared independence from the Kingdom of Great Britain, and became the first states in the U.S. Nicknames for the flag include the Stars and Stripes, Old Glory, and the Star-Spangled Banner.

The current design of the U.S. flag is its 27th; the design of the flag has been modified officially 26 times since 1777. The 48-star flag was in effect for 47 years until the 49-star version became official on July 4, 1959. The 50-star flag was ordered by then president Eisenhower on August 21, 1959, and was adopted in July 1960. It is the longest-used version of the U.S. flag and has been in use for over 60 years. If a new U.S. state were to be admitted, it would require a new design of the flag to accommodate an additional star for a 51st state.

Potential statehood candidates include U.S. territories, the national capital (Washington, D.C.), or a state created from the partition of an existing state. Residents of the District of Columbia (D.C.) and Puerto Rico have each voted for statehood in referendums (most recently in the 2016 statehood referendum in the District of Columbia and the 2020 Puerto Rican status referendum). Neither proposal has been approved by Congress.

In 2019, District of Columbia mayor Muriel Bowser had dozens of 51-star flags installed on Pennsylvania Avenue, the street linking the U.S. Capitol building with the White House, in anticipation of a hearing in the U.S. House of Representatives regarding potential District of Columbia statehood. On June 26, 2020, the House voted to establish D.C. as the 51st state; however, the bill has not and is not expected to pass in the Senate, and the administration of President Donald Trump has indicated he would veto the bill if passed by both chambers.

According to the U.S. Army Institute of Heraldry, the United States flag never becomes obsolete. Any approved American flag may continue to be used and displayed until no longer serviceable.

The Great Seal is a principal national symbol of the United States. The phrase is used both for the physical seal itself, which is kept by the United States Secretary of State, and more generally for the design impressed upon it. The obverse of the Great Seal depicts the national coat of arms of the United States, while the reverse depicts “A pyramid unfinished”. The pyramid is conventionally shown as consisting of 13 layers to refer to the 13 original states. The adopting resolution provides that it is inscribed on its base with the date MDCCLXXVI (1776, the year of the United States Declaration of Independence) in Roman numerals. Where the top of the pyramid should be, the Eye of Providence watches over it. Two mottos appear: Annuit cœptis signifies that Providence has “approved of (our) undertakings.” Novus ordo seclorum, freely taken from Virgil, is Latin for “a new order of the ages.”

First used in 1782, the seal is used to authenticate certain documents issued by the federal government of the United States. Since 1935, both sides of the Great Seal have appeared on the reverse of the one-dollar bill. The coat of arms is used on official documents – including United States passports – military insignia, embassy placards, and various flags. The Seal of the President of the United States is directly based on the Great Seal, and its elements are used in numerous government agency and state seals.

Today’s official versions from the Department of State are largely unchanged from the 1885 designs. The current rendering of the reverse was made by Teagle & Little of Norfolk, Virginia, in 1972. It is nearly identical to previous versions, which in turn were based on Lossing’s 1856 version.