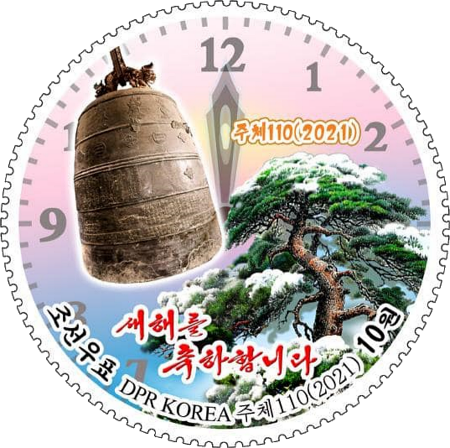 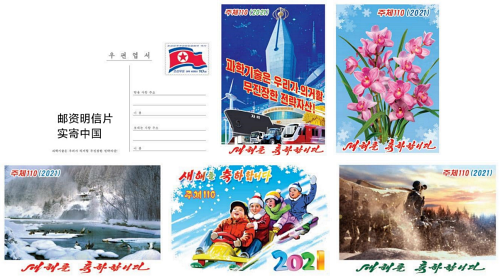 The Korea Stamp Corporation, founded in 1946, is the issuing authority of postage stamps in North Korea.  The country issues copious amounts of stamps. Since the 1970s, the country has outproduced South Korea in terms of issuance. The stamps tend to portray patriotic and nationalist themes and are used as a form of propaganda, but some of them have little connection with the country.

The first stamps of North Korea were issued on 12 March 1946.  The country has been a member of the Fédération Internationale de Philatélie since 15 June 1965. Stamps prior to 1974 dealt primarily with subjects relating specifically to North Korea, its foundation, Kim Il-sung and other patriotic themes. After 1974, in a bid to bring more hard currency into the country, North Korea began issuing stamps with wide-ranging themes (such as Joan of Arc, airships, sports and wildlife) and using English inscriptions.

Nowadays, wording on the stamps is mostly in Korean. The term “DPR Korea” is written in English. There is a museum in Pyongyang, the Korea Stamp Museum, dedicated to philately in the country.

The Democratic People’s Republic of Korea (DPRK or DPR Korea; Korean: 조선민주주의인민공화국/朝鮮民主主義人民共和國, Chosŏn Minjujuŭi Inmin Konghwaguk), is a country in East Asia constituting the northern part of the Korean Peninsula. The country is bordered to the north by China and by Russia along the Amnok (known as the Yalu in Chinese) and Tumen rivers, and to the south by South Korea, with the heavily fortified Korean Demilitarized Zone (DMZ) separating the two. North Korea, like its southern counterpart, claims to be the legitimate government of the entire peninsula and adjacent islands. Pyongyang is the country’s capital and largest city.

In 1910, Korea was annexed by Imperial Japan. At the Japanese surrender at the end of World War II in 1945, Korea was divided into two zones, with the north occupied by the Soviet Union and the south occupied by the United States. Negotiations on reunification failed, and in 1948, separate governments were formed: the socialist Democratic People’s Republic of Korea in the north, and the capitalist Republic of Korea in the south. An invasion initiated by North Korea led to the Korean War (1950–1953). The Korean Armistice Agreement brought about a ceasefire, but no peace treaty was signed.

According to article 1 of the constitution of North Korea, the DPRK is an “independent socialist State”. North Korea holds elections, though they have been described by independent observers as sham elections. North Korea is a totalitarian Stalinist dictatorship, with an elaborate cult of personality around the Kim dynasty. The Workers’ Party of Korea (WPK), led by a member of the ruling family, holds absolute power in the state and leads the Democratic Front for the Reunification of the Fatherland of which all political officers are required to be members.

According to article 3 of the constitution of the DPRK, Juche is the North Korean official ideology. The means of production are owned by the state through state-run enterprises and collectivized farms. Most services — such as healthcare, education, housing and food production — are subsidized or state-funded. From 1994 to 1998, North Korea suffered a famine that resulted in the deaths of between 240,000 and 420,000 people, and the population continues to suffer malnutrition.

North Korea follows Songun, or “military-first” policy. It is the country with the highest number of military and paramilitary personnel, with a total of 9,495,000 active, reserve and paramilitary personnel, or approximately 37% of its population. Its active duty army of 1.21 million is the fourth-largest in the world, after China, the United States and India; consisting of 4.7% of its population. It possesses nuclear weapons. In addition to being a member of the United Nations since 1991, North Korea is also a member of the Non-Aligned Movement, G77 and the ASEAN Regional Forum.

A 2014 UN inquiry into abuses of human rights in North Korea concluded that, “the gravity, scale and nature of these violations reveal a state that does not have any parallel in the contemporary world,” with Amnesty International and Human Rights Watch holding similar views. The North Korean government denies these abuses.

The flag of North Korea, also known as the Ramhongsaek Konghwagukgi (람홍색공화국기; literally “blue and red-colored flag of the republic”), consists of a central red panel, bordered both above and below by a narrow white stripe and a broad blue stripe. The central red panel bears a five-pointed red star within a white circle near the hoist. The flag is banned from public use in South Korea due to its association with the ruling North Korean regime, although some exceptions for the usage of the flag exist.

The North Korean flag’s prominent motif is a red star, which is a universal symbol of communism and socialism, although since the flag’s adoption the application of the Marxist-Leninist-natured philosophy of Juche has replaced communist authority as the state’s guiding ideology, and references to communism have been systematically removed from the country’s constitution and legal documents. However, the constitution is still stated to be socialist in nature. Despite the many changes to the constitution, the description of the flag has always remained the same.

The website of the Korean Friendship Association indicates that, on the contrary, the red star represents revolutionary traditions and the red panel is indicative of the patriotism and determination of the Korean people. The white stripes symbolize the unity of the Korean nation and its culture. The blue stripes represent the desire to fight for independence, peace, friendship, and international unity.

According to a typical North Korean official text published in Rodong Sinmun, Kim Il-sung gave the following significance to the flag’s elements:

The red of the flag symbolizes anti-Japanese sentiment, and is the color of blood shed by the Korean patriots and the invincible might of our people firmly united to support the Republic. The white symbolizes one bloodline, one land, one language, one culture of our monoethnic country, which lived in purity. And blue stands for the gallant visage of our people and symbolizes the spirit of the Korean people fighting for world peace and progress.

It is possible that the original designer of the flag had a vertical design in mind. In the vertically hoisted flag the blue stripes would symbolize the Yellow Sea and Sea of Japan surrounding the red Korean Peninsula that is illuminated by the communist star.

The colors of the North Korean flag – red, white, and blue – are considered national colors and symbolize respectively: revolutionary traditions; purity, strength, and dignity; and sovereignty, peace, and friendship.

The National Emblem of the Democratic People’s Republic of Korea is the coat of arms of North Korea. The current version adopted in 1993 is based on a design that was used since the foundation of the republic in 1948. Two previous versions were briefly in use in the late 1940s. Prominent features on the emblem are a red star, a hydroelectric plant (the Sup’ung dam) and Mount Paektu. The design bears similarities to the emblem of the Soviet Union and other emblems of the socialist heraldic style.