In 2020 the Austrian constitution celebrates its 100th anniversary. Praised by the Federal President Alexander Van der Bellen for its ‘elegance and beauty,’ its contents are not well enough known, and the devotion to the constitution that in countries such as the USA is rare in Austria.

The important role played by the legal expert Hans Kelsen in drafting the constitution also needs to be emphasized. Born in Prague in 1881, he grew up in Vienna in a German-speaking Jewish family. His father, a chandelier manufacturer, designed the lighting for Viennese synagogues. After the collapse of the monarchy, Kelsen was commissioned by State Chancellor Karl Renner to help draft a federal constitution for the young republic. He developed what became known as the Austrian model for constitutional jurisdiction, which was emulated by countries throughout the world.

Kelsen, who was a professor at the University of Vienna from 1918 to 1930, became internationally renowned in particular for his contributions to legal and political theory. In the increasingly anti-Semitic climate of the times, his innovative ideas made him lots of enemies. He left Vienna in 1930 and after various stops in Europe ultimately emigrated in 1940 to the USA, where he lived until his death in 1973. He is regarded today as one of the most important legal scholars of the twentieth century.

On the 100th anniversary of the Austrian constitution, the exhibition pays tribute to its architect and presents his life and work. It also invites you to take a closer look at the constitution and the surprising insights and realizations it reveals. 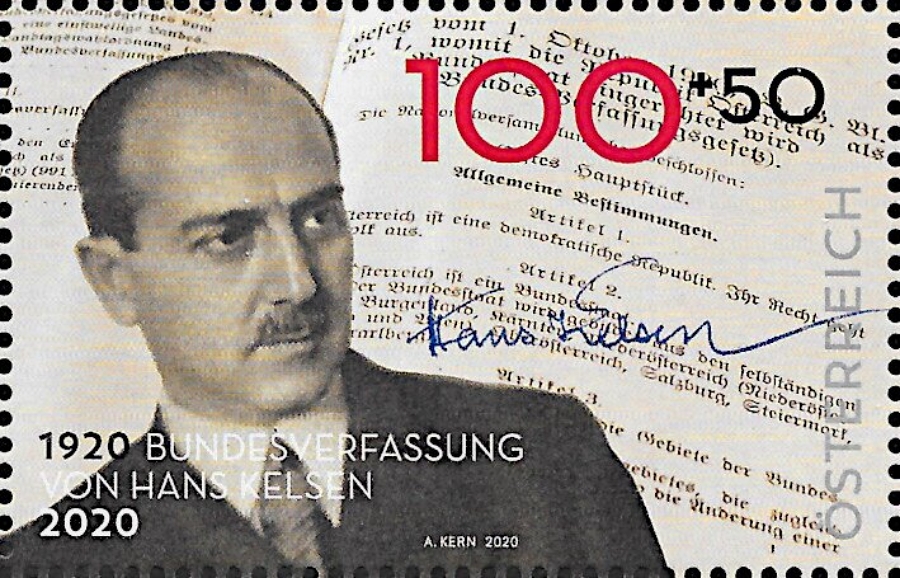 Austria has been governed by multiple constitutions, including the Pillersdorf Constitution in 1848, the “irrevocable” Stadion Constitution from 1848 to 1851, the October Diploma in 1860, the February Patent from 1861 until 1865.

The B-VG was based on drafts whose principal author was Hans Kelsen and was first enacted on October 1, 1920. Since political agreement over a bill of rights could not be reached, the Basic Law on the General Rights of Citizens (Staatsgrundgesetz über die allgemeinen Rechte der Staatsbürger) of 1867 was left in place and designated as constitutional law.

Originally, the B-VG was very parliamentarian in character. The prerogative to enact law was to lie with a comparatively strong parliament, the Federal Assembly composed of two houses, the National Council and the Federal Council. The responsibility for implementing law was to reside with a cabinet headed by a chancellor, who was nominated by the National Council on a motion by its principal committee. A relatively weak president, who was elected by both houses, was to serve as head of state.

In 1929, the constitution underwent a revision significantly broadening the prerogatives of the president. In particular, the president from then on was to be elected directly by the people rather than by the members of the legislature. The president was also to be vested with the authority to dissolve the parliament, a power typically not held by heads of executive branches of parliamentary republics. He also had the authority to formally appoint the chancellor and the cabinet. Although the president was vested with powers comparable to those of the President of the United States, in practice he acted on the advice of the chancellor. This move away from a government steered predominantly by a fairly large and (by definition) fractioned deliberative body towards a system concentrating power in the hands of a single autonomous leader was made in an attempt to appease the para-fascist movements (such as the Heimwehr, or later the Ostmärkische Sturmscharen and the Social Democratic Republikanischer Schutzbund) thriving in Austria at that time.

In 1934, following years of increasingly violent political strife and gradual erosion of the rule of law, the ruling Christian Social Party, which by then had turned to full-scale Austrofascism, formally replaced the constitution by a new basic law defining Austria as an authoritarian corporate state. The Austrofascist constitution was in force until Austria was annexed by Nazi Germany in 1938, ceasing to exist as a sovereign state. The Constitution of Austria was eventually reinstated on May 1, 1945, Austria having reestablished itself as an independent republic shortly before Nazi Germany’s definitive collapse. The modifications enacted in 1929 were not then rescinded, and essentially remain in effect until this day, although the constitution has been heavily modified and amended since then.