This year’s design for the series “Modern architecture in Austria” shows the Kunsthaus Graz, a museum of contemporary art and an impressive landmark of the Styrian capital.

The Kunsthaus Graz, Grazer Kunsthaus, or Graz Art Museum was built as part of the European Capital of Culture celebrations in 2003 and has since become an architectural landmark in Graz, Austria. Its exhibition program specializes in contemporary art from the 1960s onwards.

Kunsthaus Graz was designed by Colin Fournier as the Partner-in-Charge together with Sir Peter Cook. According to The Bartlett School of Architecture at University College London, the Kunsthaus’ design sought to be deliberately provocative, innovate museum design by offering a less “institutional” approach to organizing exhibition spaces and employs new materials and manufacturing techniques. The building is an example of blob architecture, and has a skin made of iridescent blue acrylic panels that also double as photovoltaic panels. Owing to its shape contrasting with its surroundings, it is known in local vernacular as the “Friendly Alien”.

The building incorporates the façade of the Eisernes Haus built 1848 in cast-iron architecture.

Architecture, design, new media, internet art, film, and photography are united under one roof. Kunsthaus Graz was developed as an institution to stage international exhibitions of multidisciplinary, modern and contemporary art from the 1960s to the present day. It does not collect art, maintains no permanent exhibitions and does not have its own depot.[5] Rather, its exclusive purpose is to present and procure contemporary art productions.

As founding director, Peter Pakesch was responsible for the orientation and the program of the Kunsthaus between the administration in 2003 and the end of his directorship at the Universalmuseum Joanneum.

The BIX Façade of the museum represents a singular fusion from architecture and New Media and is based on a concept of the Berliner architects realities:united. BIX, a name which consists of the words “Big” and “pixels”, is the acrylic glass skin of the eastern side of the building, which consists of 930 fluorescent lamps whose brightness can be individually adjusted. Variable at 20 frames per second, the facade can be used as a large screen for films and animations in what is referred to as a “communicative display skin”.

The BIX facade concept was entered into the permanent Architecture and Design Collection of the Museum of Modern Art (MoMA) in New York in 2011. 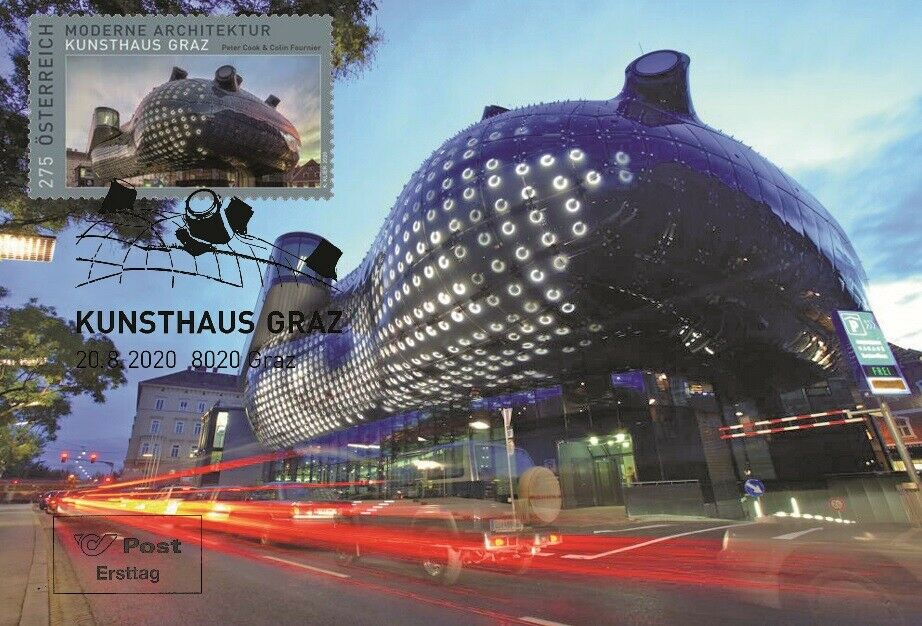