This stamp issue showcases recent large-scale artwork on a prominent feature of rural Australia: the water tower, or water tank. As well as encouraging much-needed tourism, these striking water tower murals are often a great source of community pride, especially as they tend to showcase local people, history, culture and wildlife.

Featured in this issue is water tower art from the towns of Gulargambone, New South Wales (artist, Jenny McCracken); Winton, Victoria (artist, Guido Van Helten); Narrandera, New South Wales (artists from Apparition Media); and Snowtown, South Australia (artist, Vans the Omega). The minisheet shows the water tank that overlooks the township of Cloncurry, Queensland. Painted by The Zookeeper in 2018, the imagery includes the Cloncurry Parrot, the eagle hawk sacred to the Mitakoodi people, and local children Barrack and Brianna. A paper plane refers the Royal Flying Doctor Service, which began in Cloncurry in 1928.

This issue is the third to feature large-scale public mural art, following Street Art (2017) and Silo Art (2018) . In our blog article, take a look back at these issues and learn more about the Australian Silo Art Trail, which includes silo art, water tower art and, increasingly, street art from rural towns. 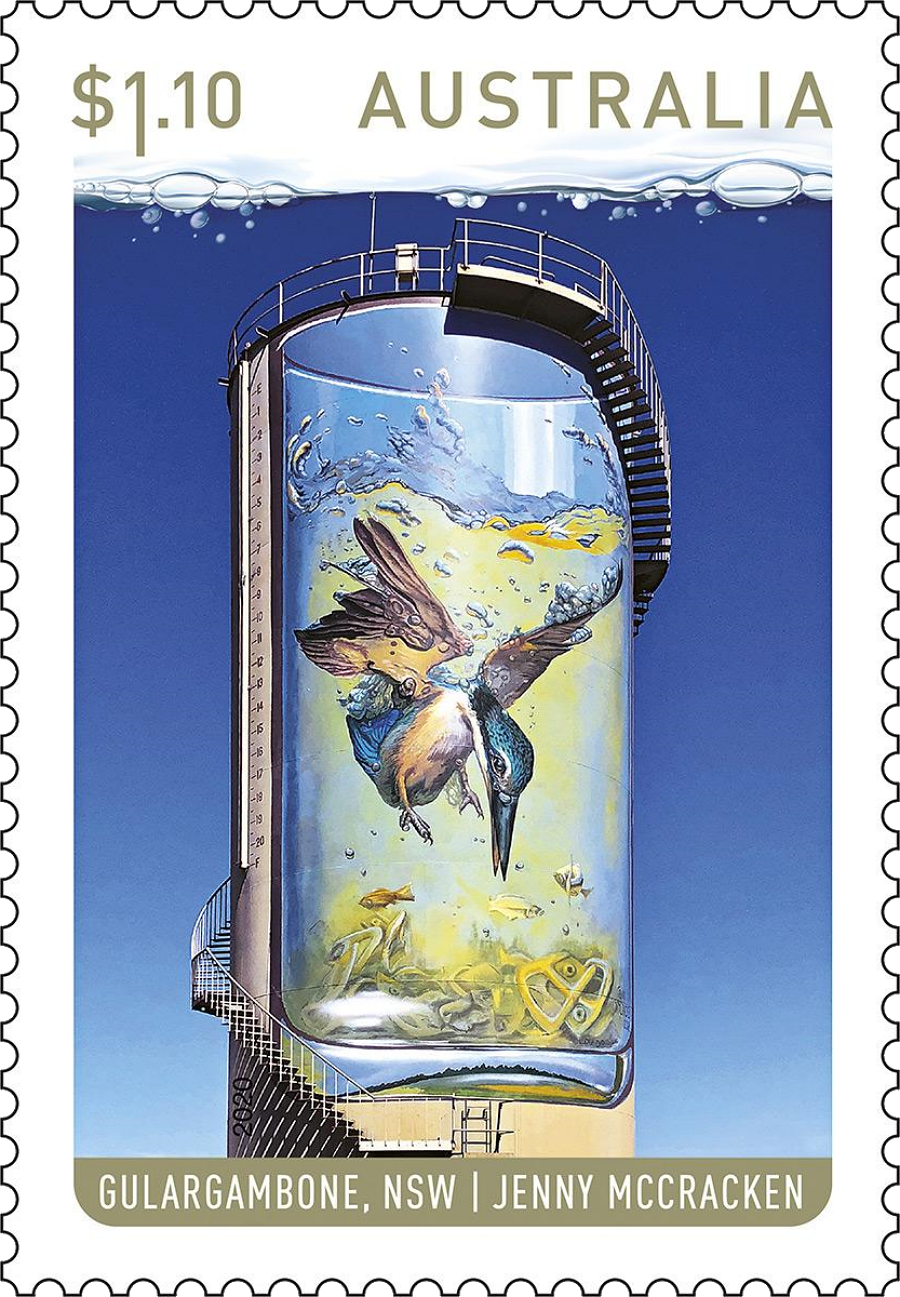 Gulargambone is a small town located on the central west plains of New South Wales, on the banks of the Castlereagh River, a seven-hour drive from Sydney. The town is situated in the lands of the Wiradjuri Nation, and its name is said to derive from a local word for “watering place of many birds” or “place of galahs”.

In April 2018, the community held a street art festival, which saw 11 artists from across Australia paint murals all over the town and hold workshops for the locals. The artworks included a mural on the town’s water tower, located next to the football ground. Painted by Jenny McCracken, of Zest Events International, the mural, entitled Lucky Dip, has transformed the water tower into a huge glass of water. A kingfisher is pictured diving to the bottom in search of fish. The subject is a reference to the name of the town and highlights the importance of water to the drought-stricken community. Jenny McCracken has an international reputation as a pavement and mural artist and has been a finalist in the Moran National Portrait Prize. 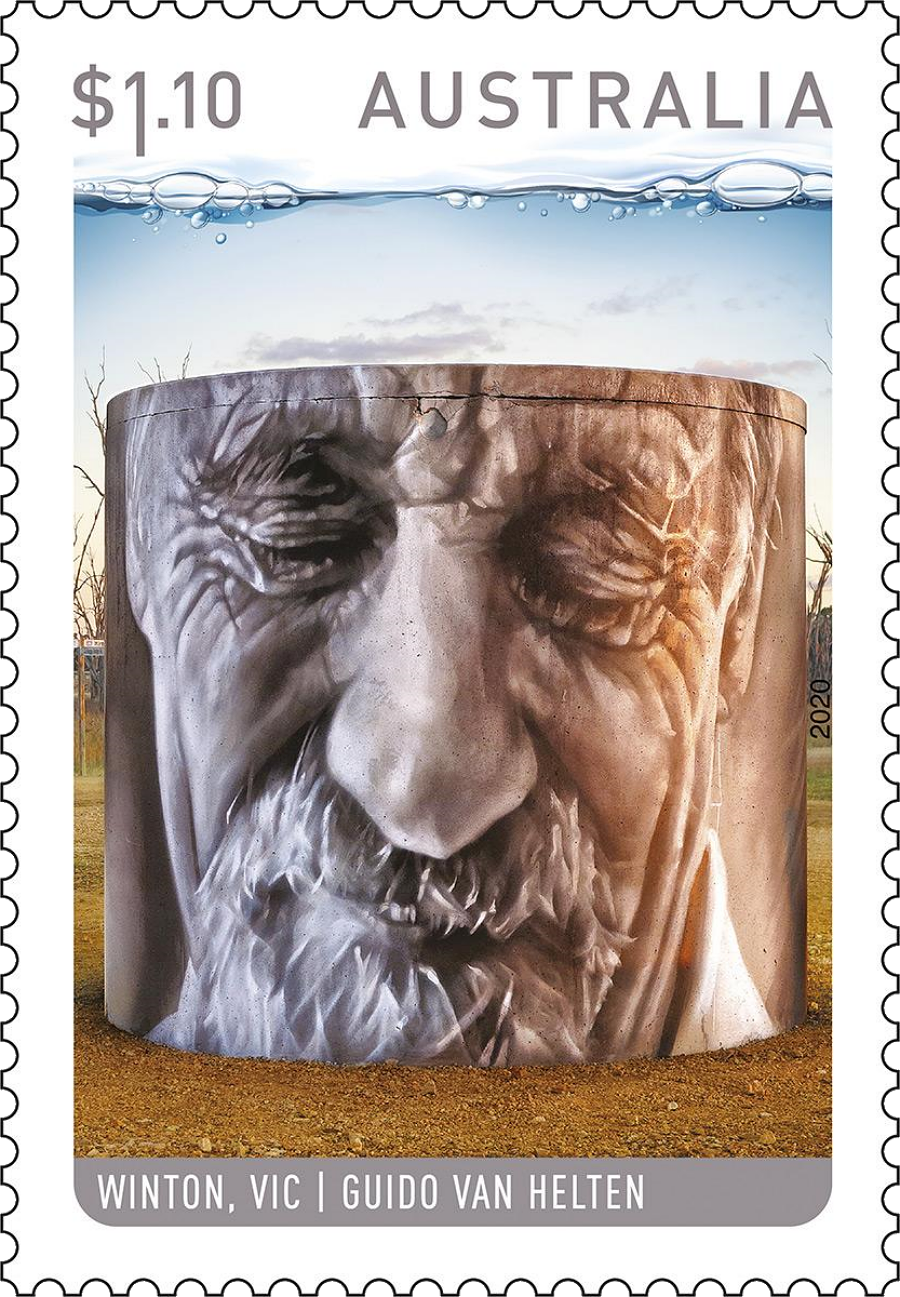 The mural on the concrete water tank at Winton was commissioned in 2016 for the annual Wall to Wall Festival in the nearby town of Benalla, a large town of 14,000 people located in north-eastern Victoria. The water tank is in the Winton Wetlands, an 8,750-hectare, environmentally and culturally important region just outside Benalla, on the traditional lands of the Yorta Yorta Nation. The tank is owned by the Country Fire Authority (CFA), and the artist, Guido van Helten, painted it with portraits of three local CFA volunteer members: Colin Hooke, from the Chesney Fire Brigade (represented on the stamp); Robert Green, of Taminick Brigade; and Danielle Spokes, of Winton Brigade.

Like many of Guido van Helten’s murals, the Winton work is executed in grisaille, or shades of grey. Brisbane-born van Helten is one of the world’s great muralists. He has painted works on a range of large-scale surfaces around the globe, including in Ukraine, Spain, Iceland, Mexico and USA. His work on Victoria’s Brim wheat silo was featured in the 2018 Silo Art stamp issue. 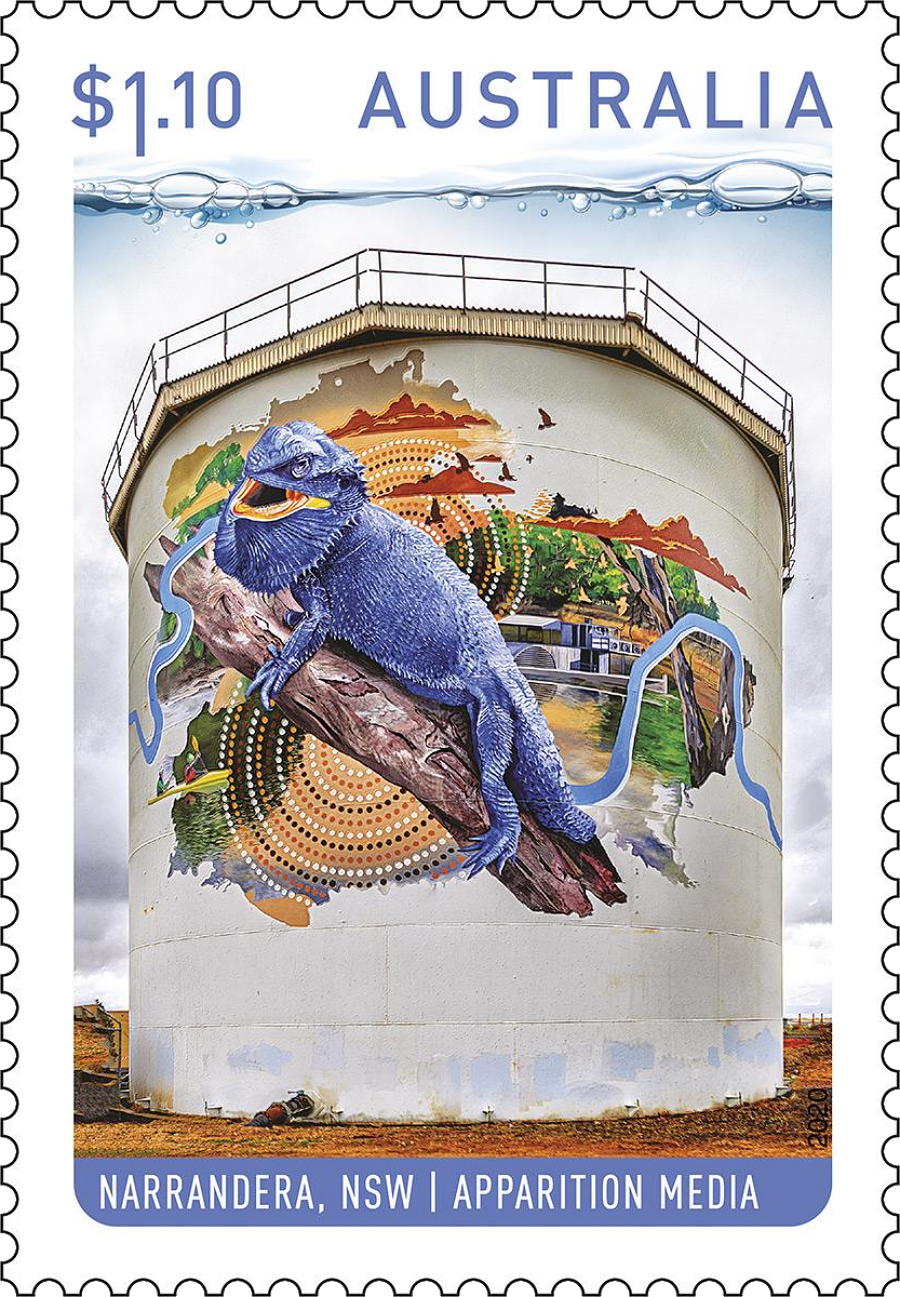 Narrandera is a town of around 3,800 people, located on the Murumbidgee River in the Riverina region of southern New South Wales. It stands on the traditional lands of the Wiradjuri Nation. The water tower is located on a hill overlooking the town and was painted over 11 days in 2019 by a team of four artists from Apparition Media, an advertising and studio that creates murals in a range of styles for commercial and community clients. The work was executed by upscaling an image onto paper, which is then rolled out on the tower before the design is chalked in and painted.

The project was funded under the federal government’s Drought Communities Program, and the design was the result of consultation with local young people and artists, including Wiradjuri artist Owen Lyons. The Eastern Bearded Dragon, which features on the stamp, refers to the Wiradjuri word for “place of lizards or goannas”, from which the town derives its name. Other local imagery on the tank includes the Koala, which has been successfully reestablished after numbers dwindled to critical levels in the 1950s, a Tiger Moth airplane and a Murumbidgee River paddle-steamer. 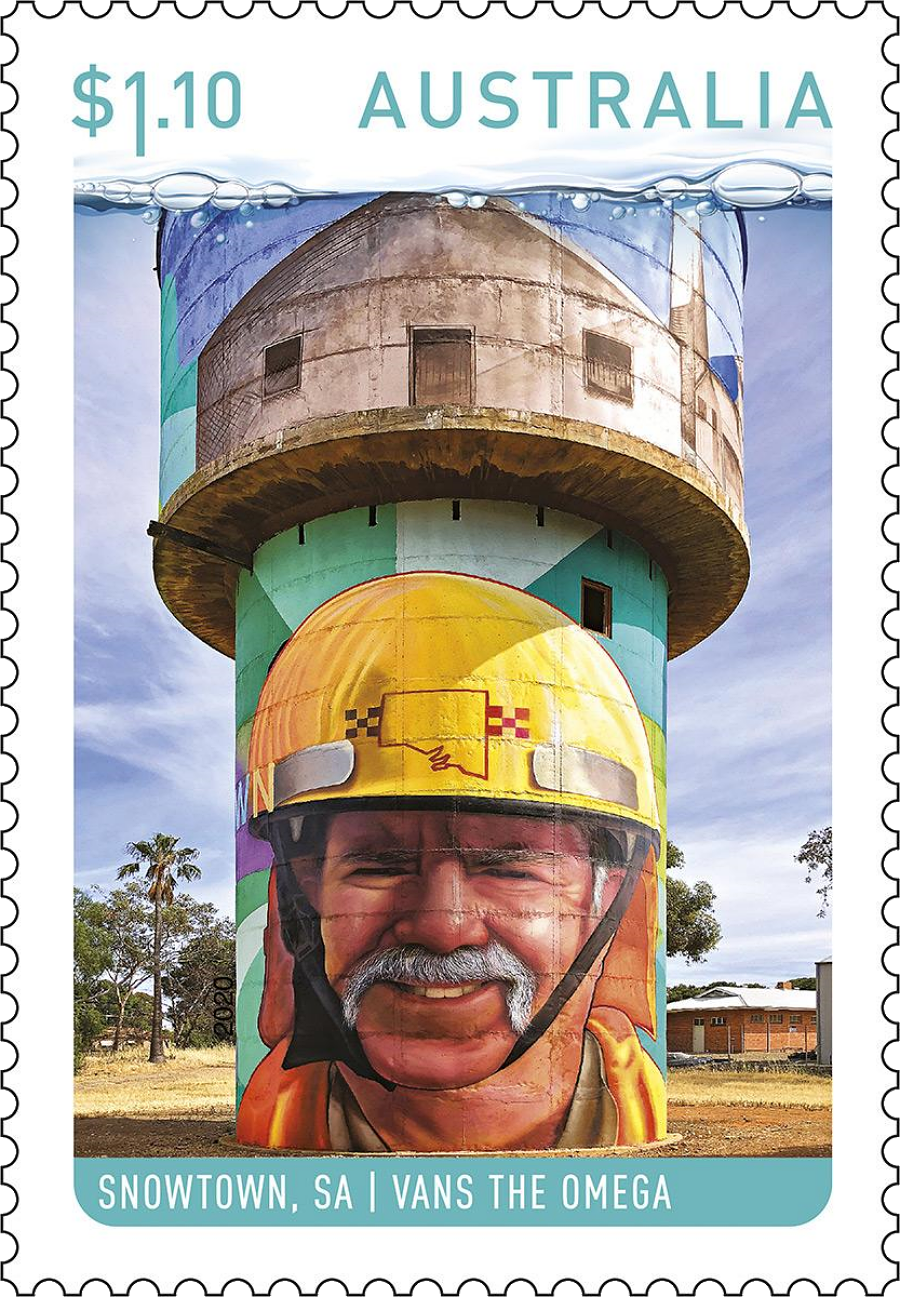 Snowtown, with a population of around 470, is located in the mid-north region of South Australia, 145 kilometres north of Adelaide on the traditional lands of the Kaurna Nation. The town was first established in the 1870s as the terminus of the Kadina railway line, and the now-disused water tank in the centre of town was originally constructed to provide water for steam engines.

One of our premier street artists, Adelaide-based Vans the Omega (Joel van Moore) has been commissioned to paint large-scale works all over the world. His distinctive portrait style is characterised by blocks of bright colour. Van the Omega’s portrait of a woman on the side of a house in the Adelaide suburb of Goodwood was included in the 2017 Street Art stamp issue. 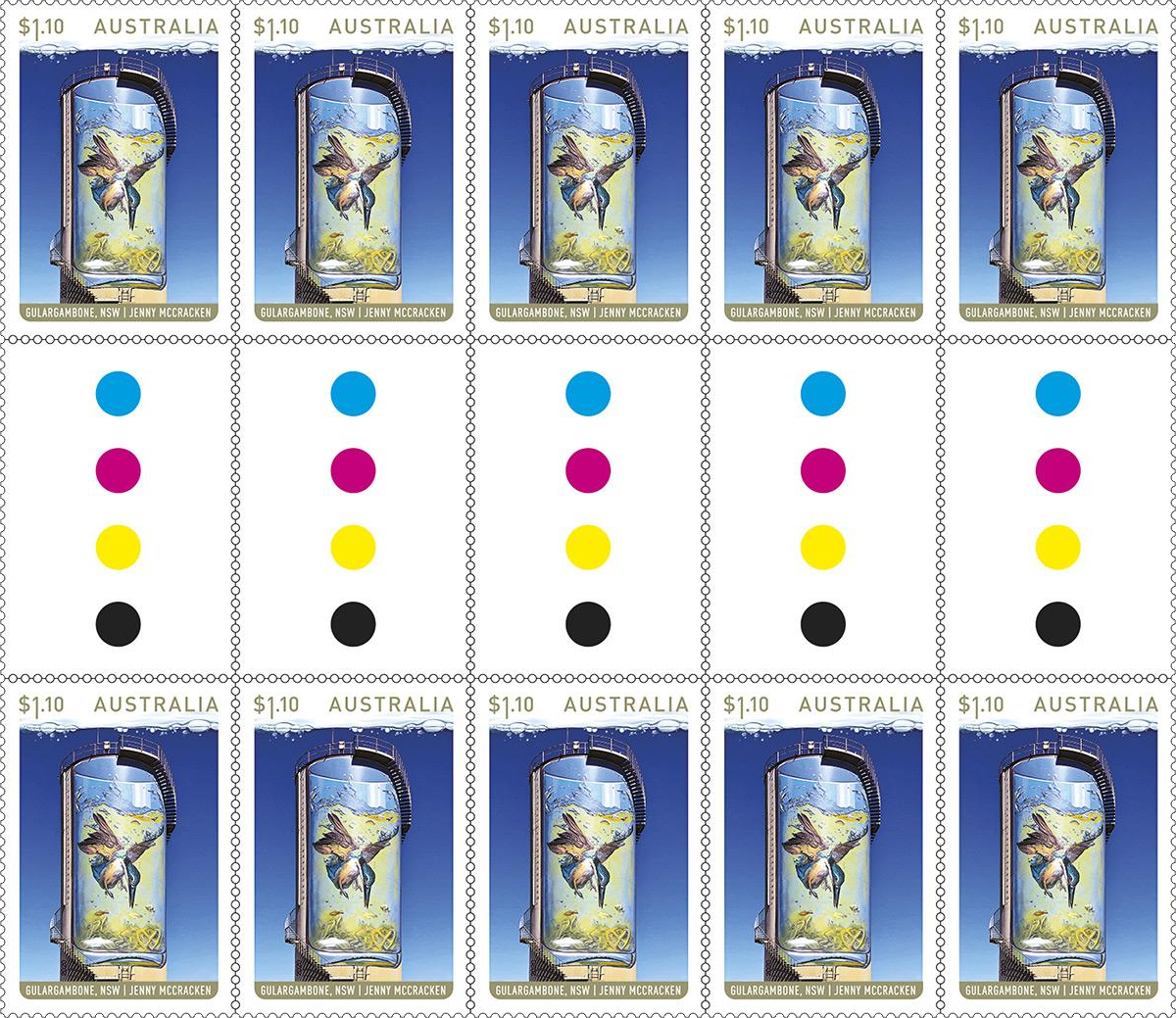 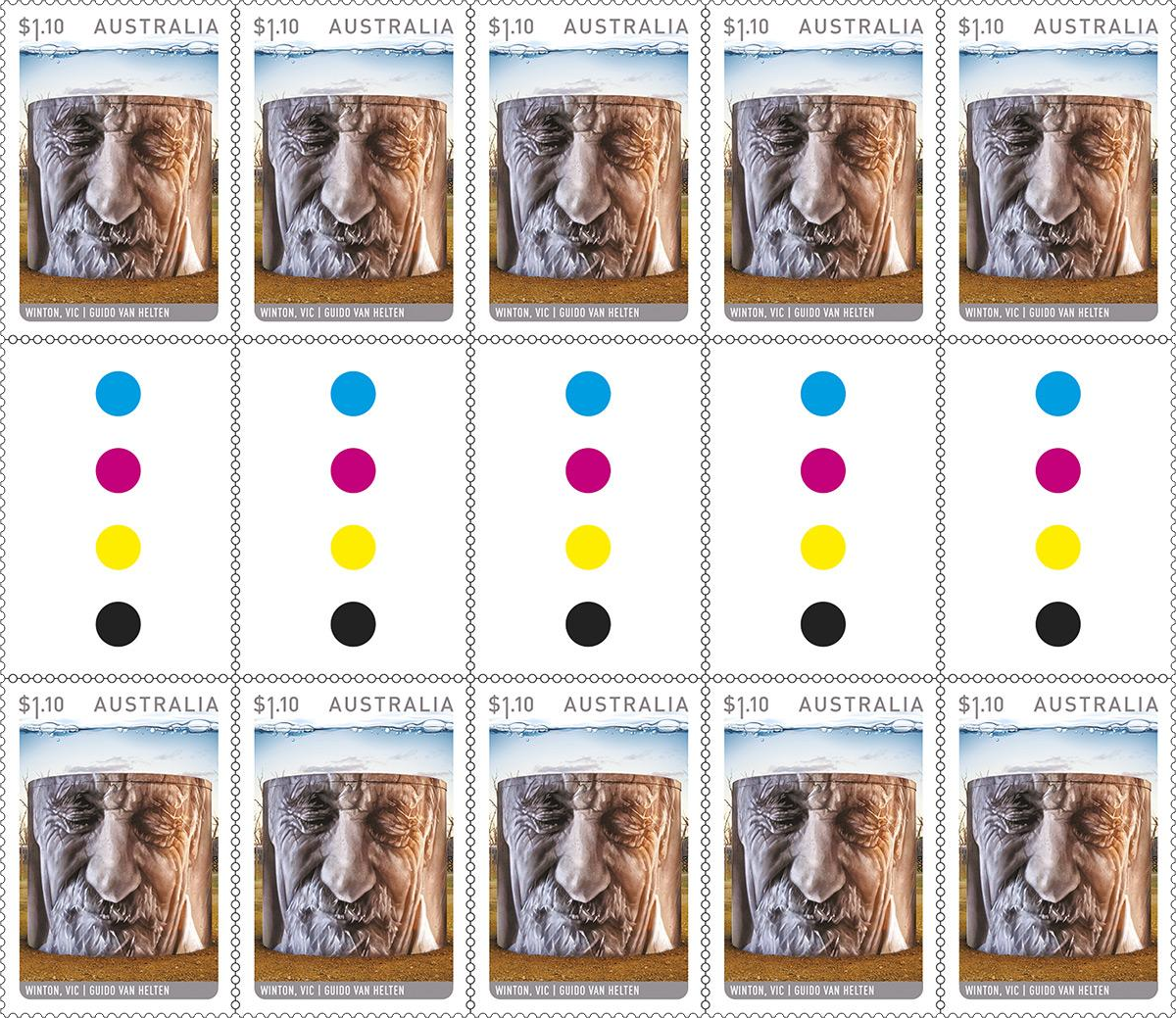 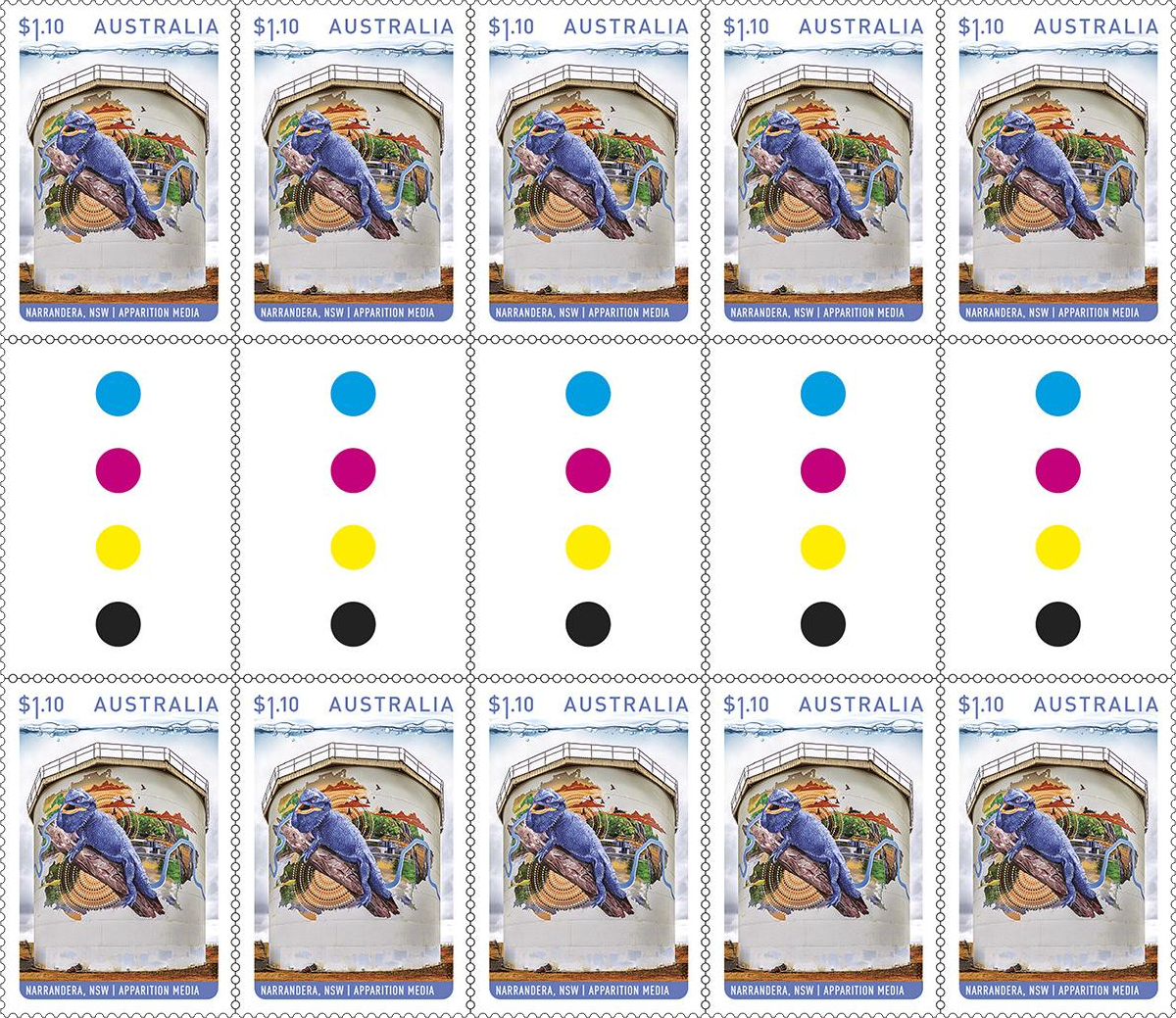 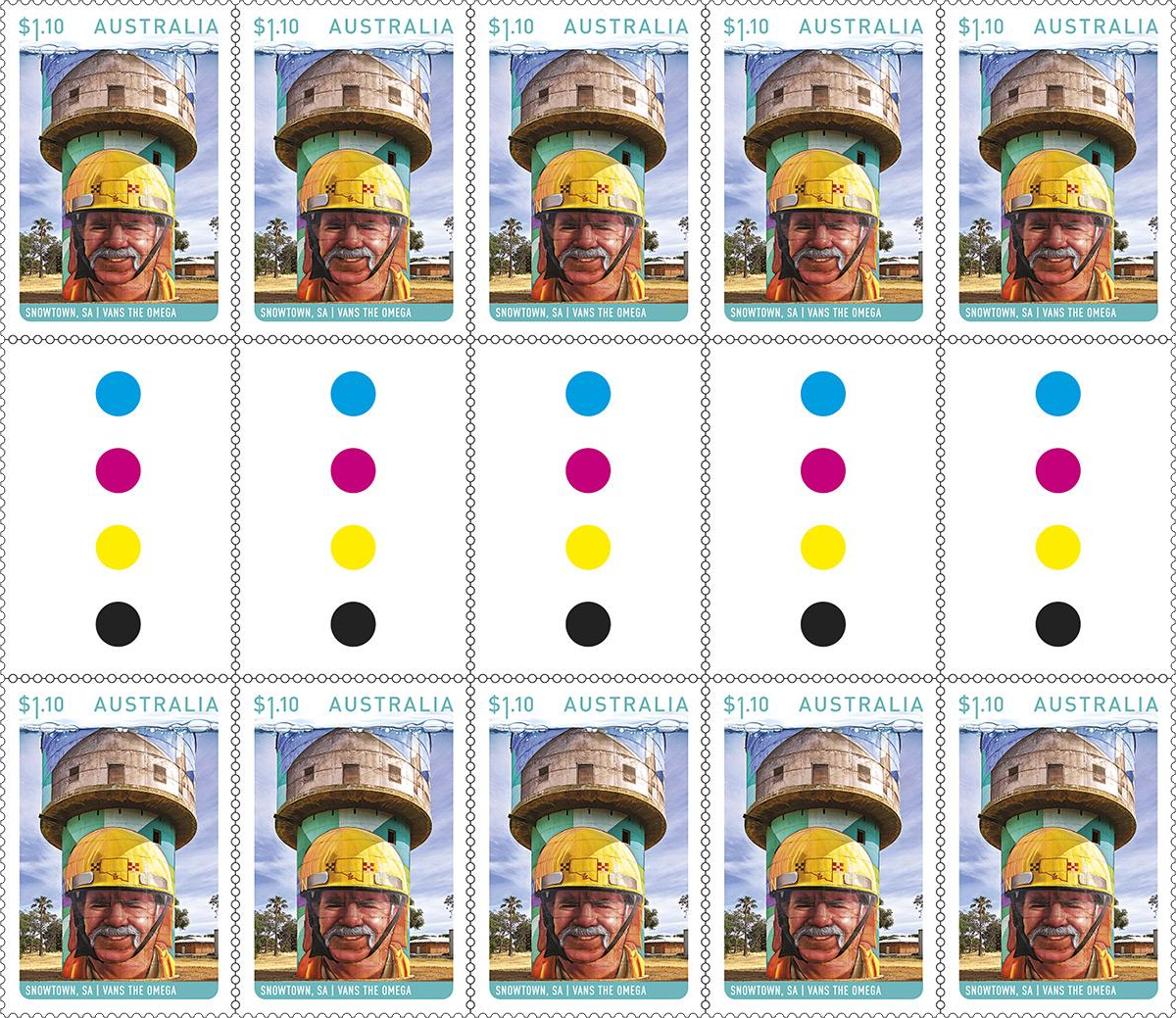 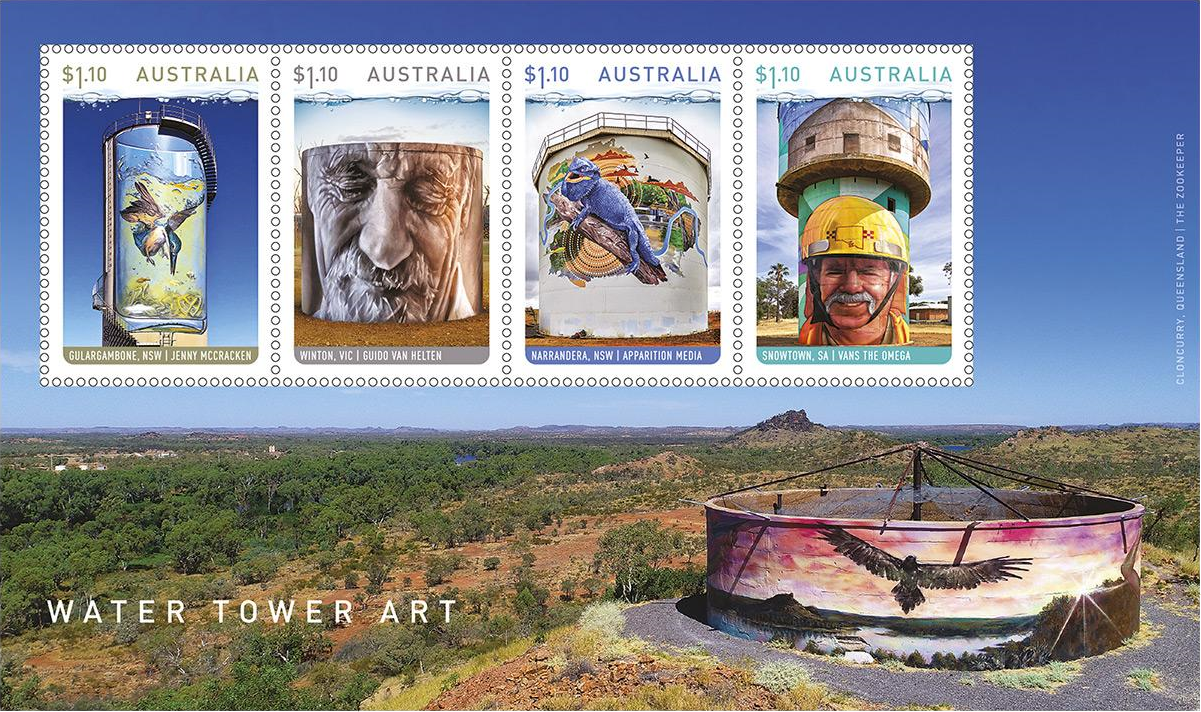 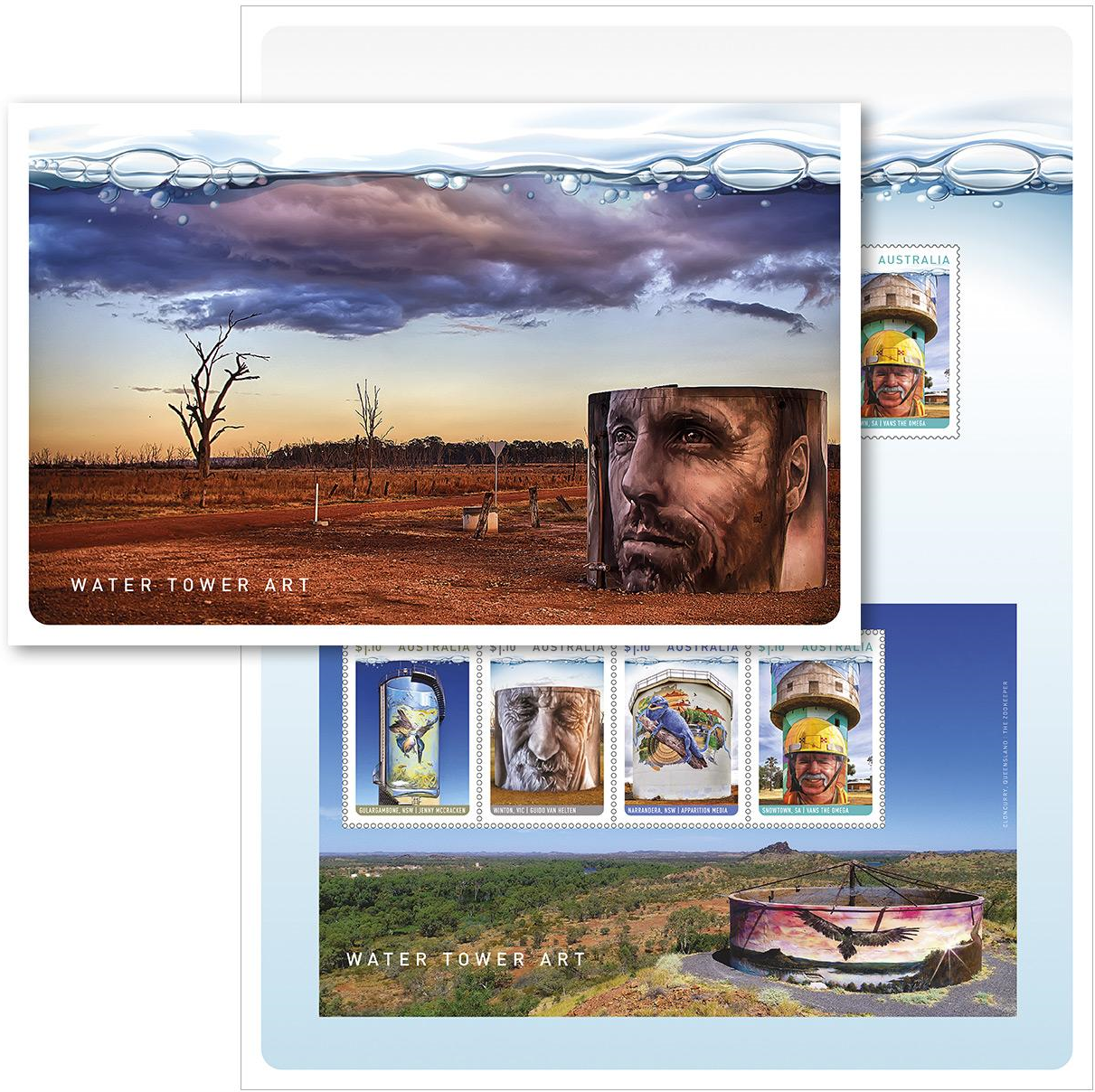 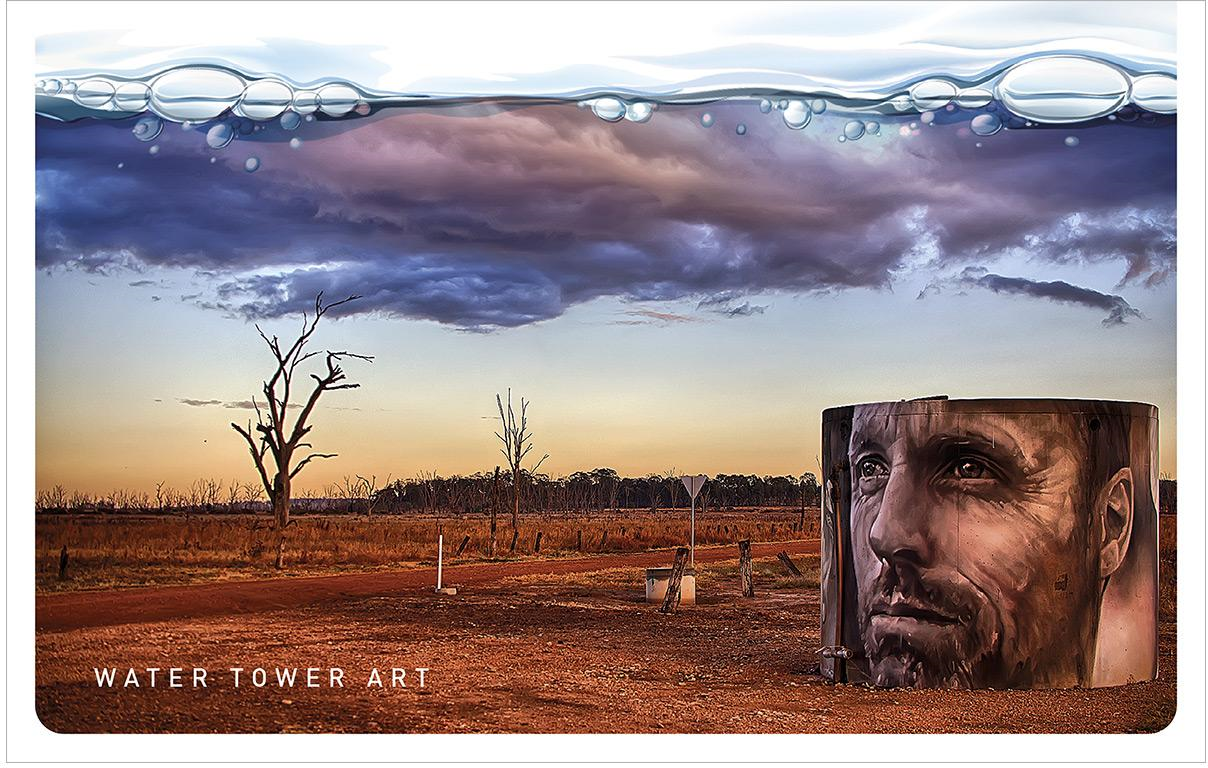 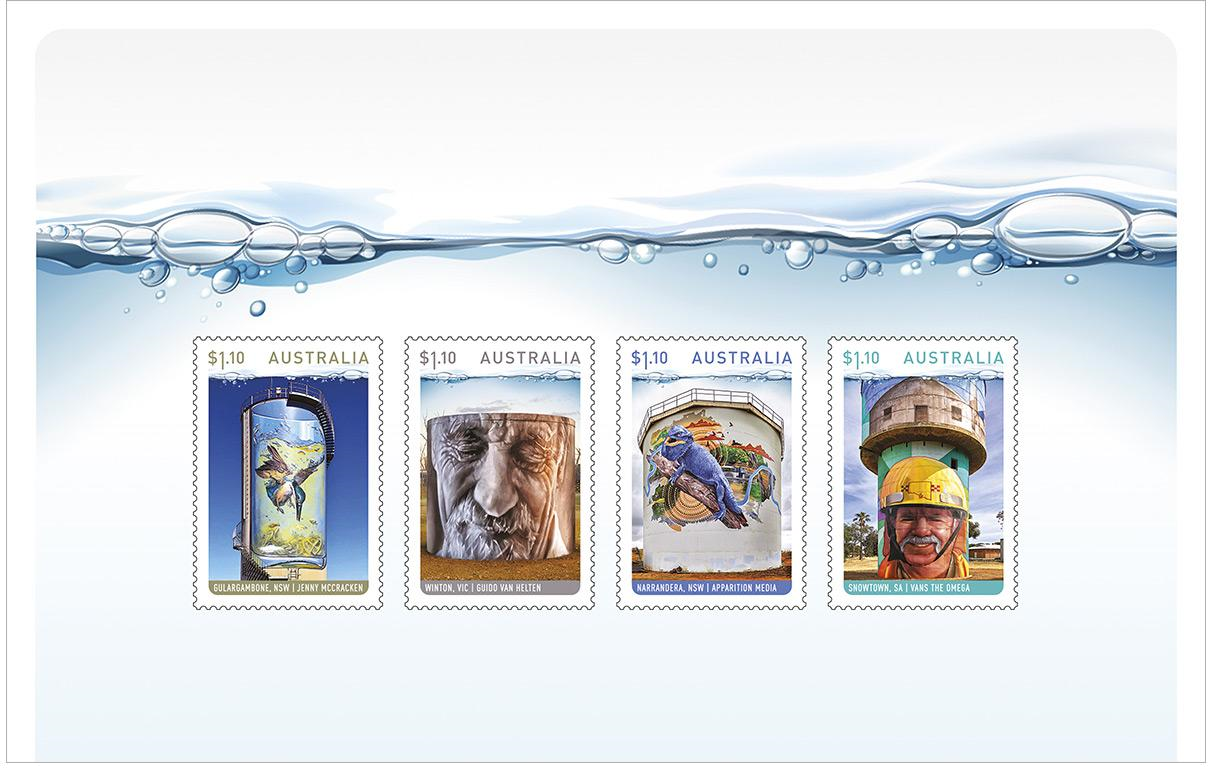 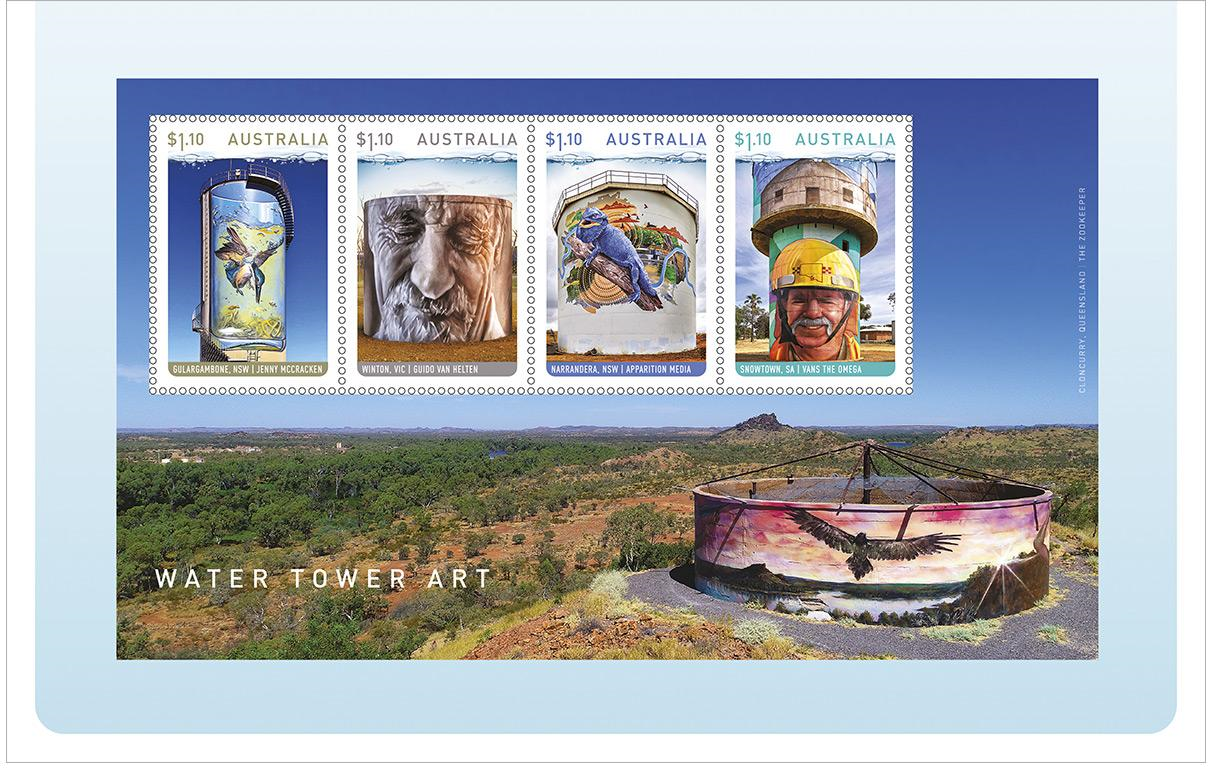 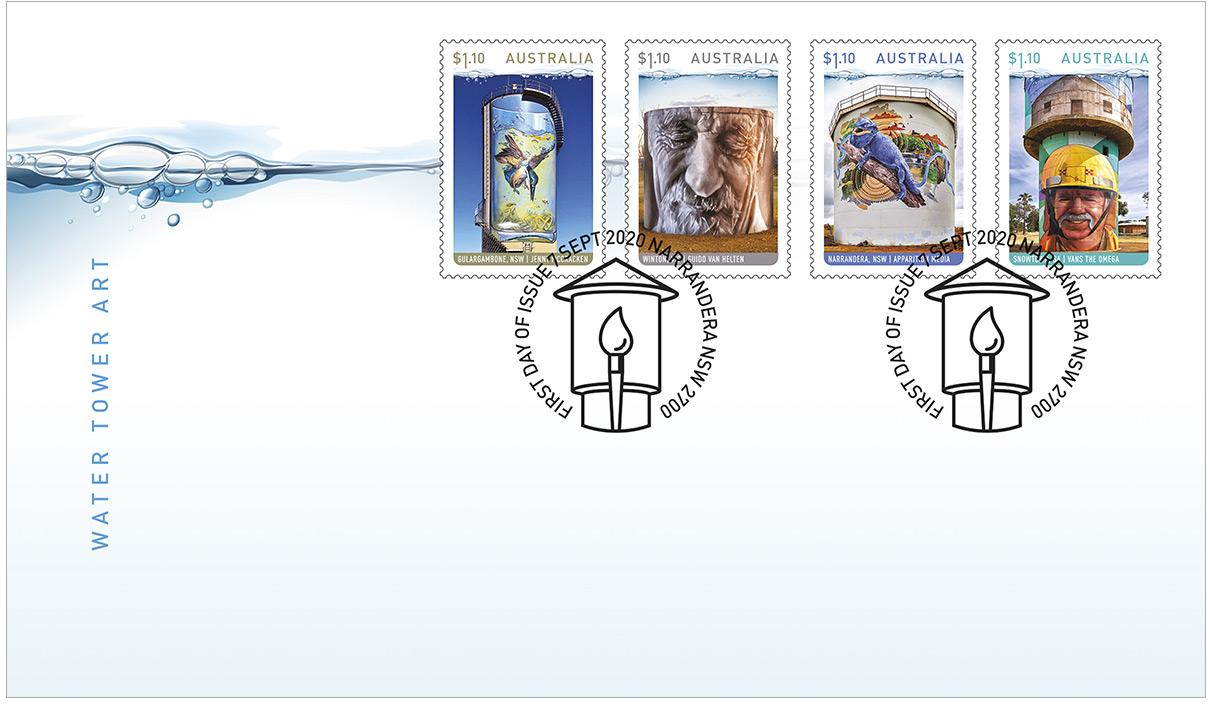 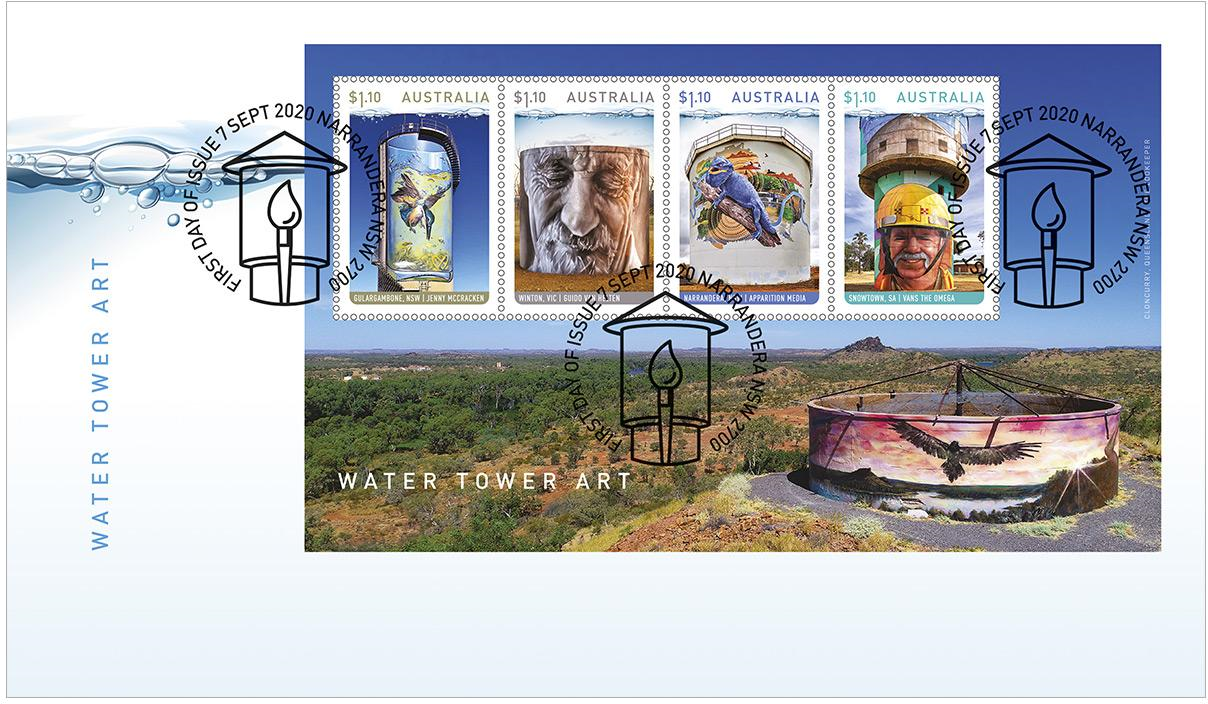 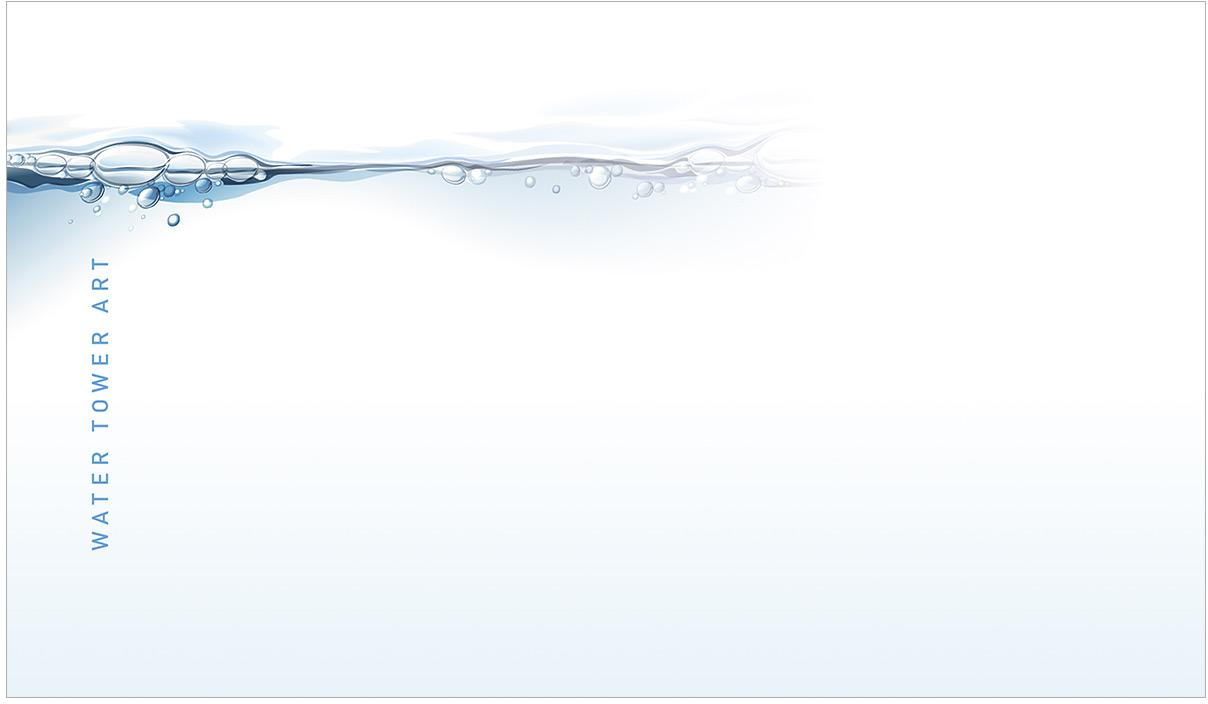 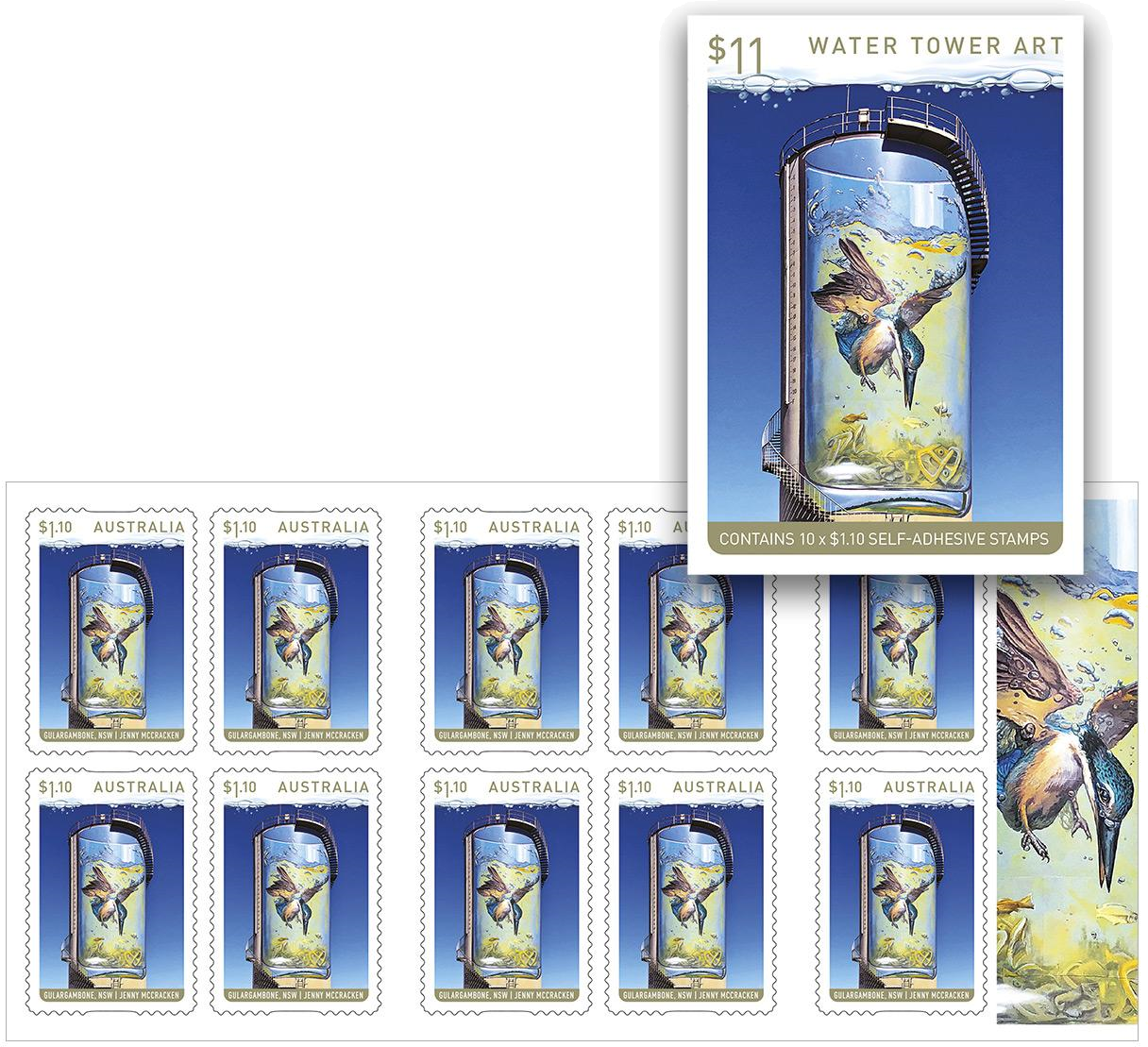 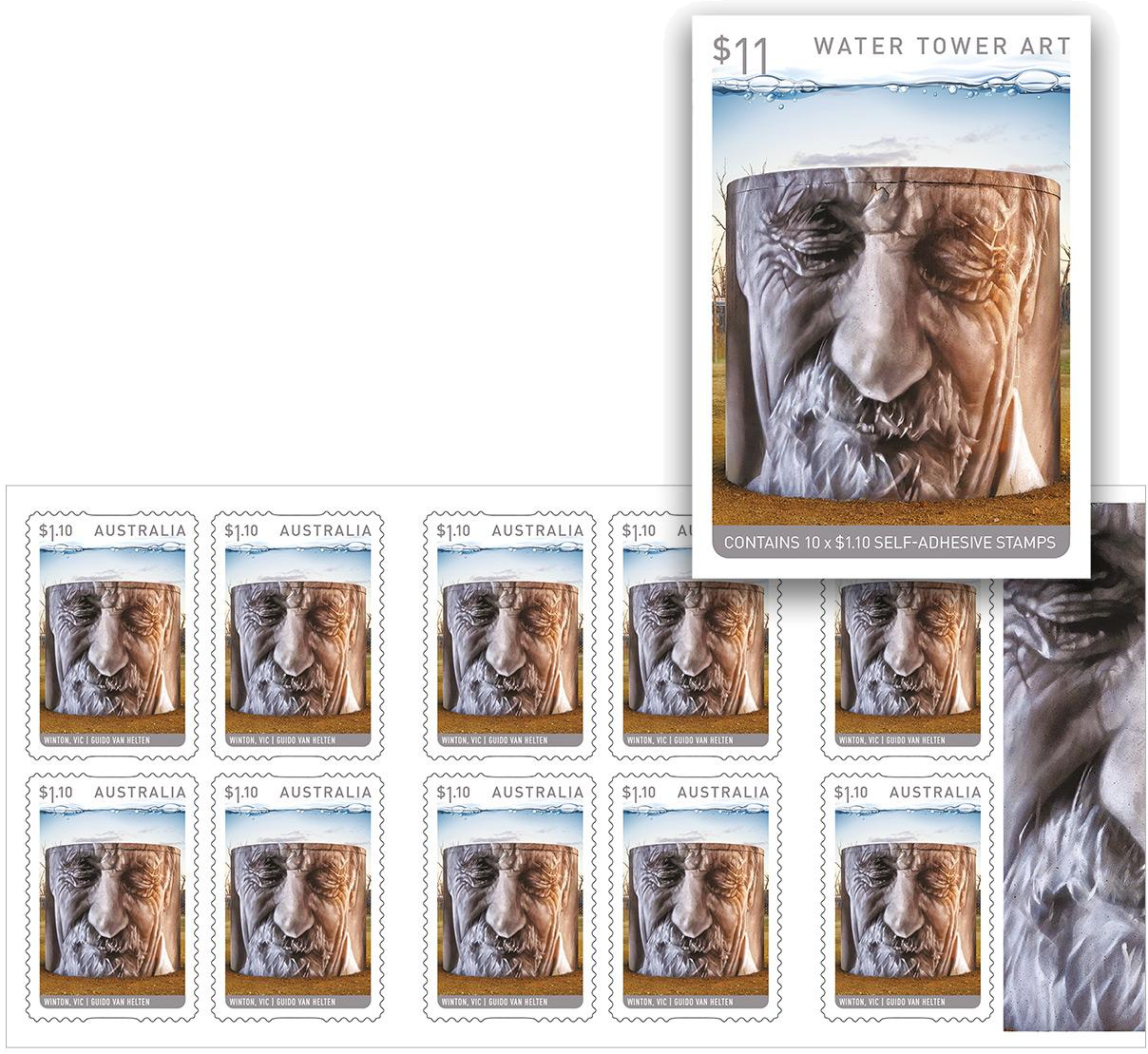 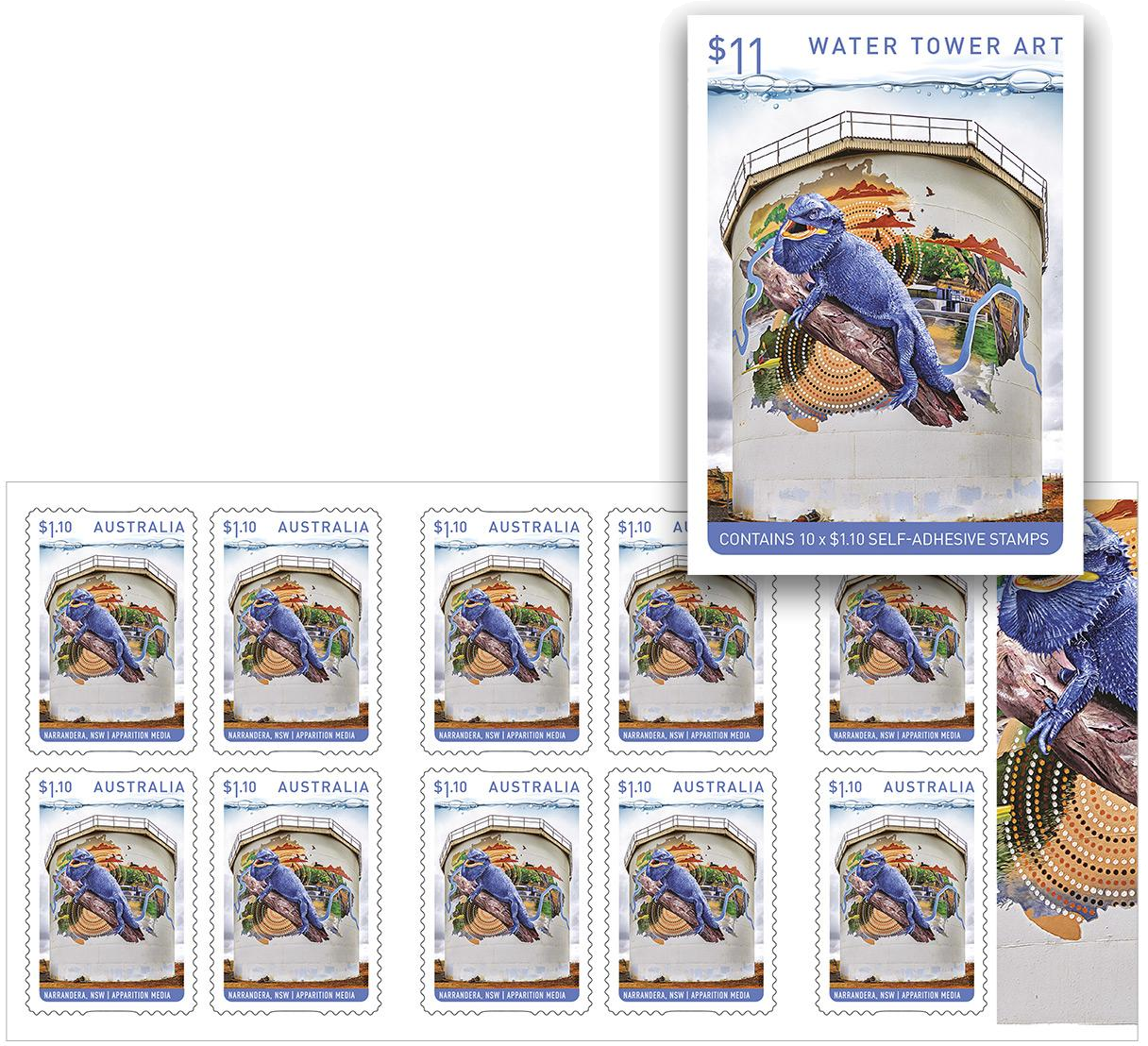 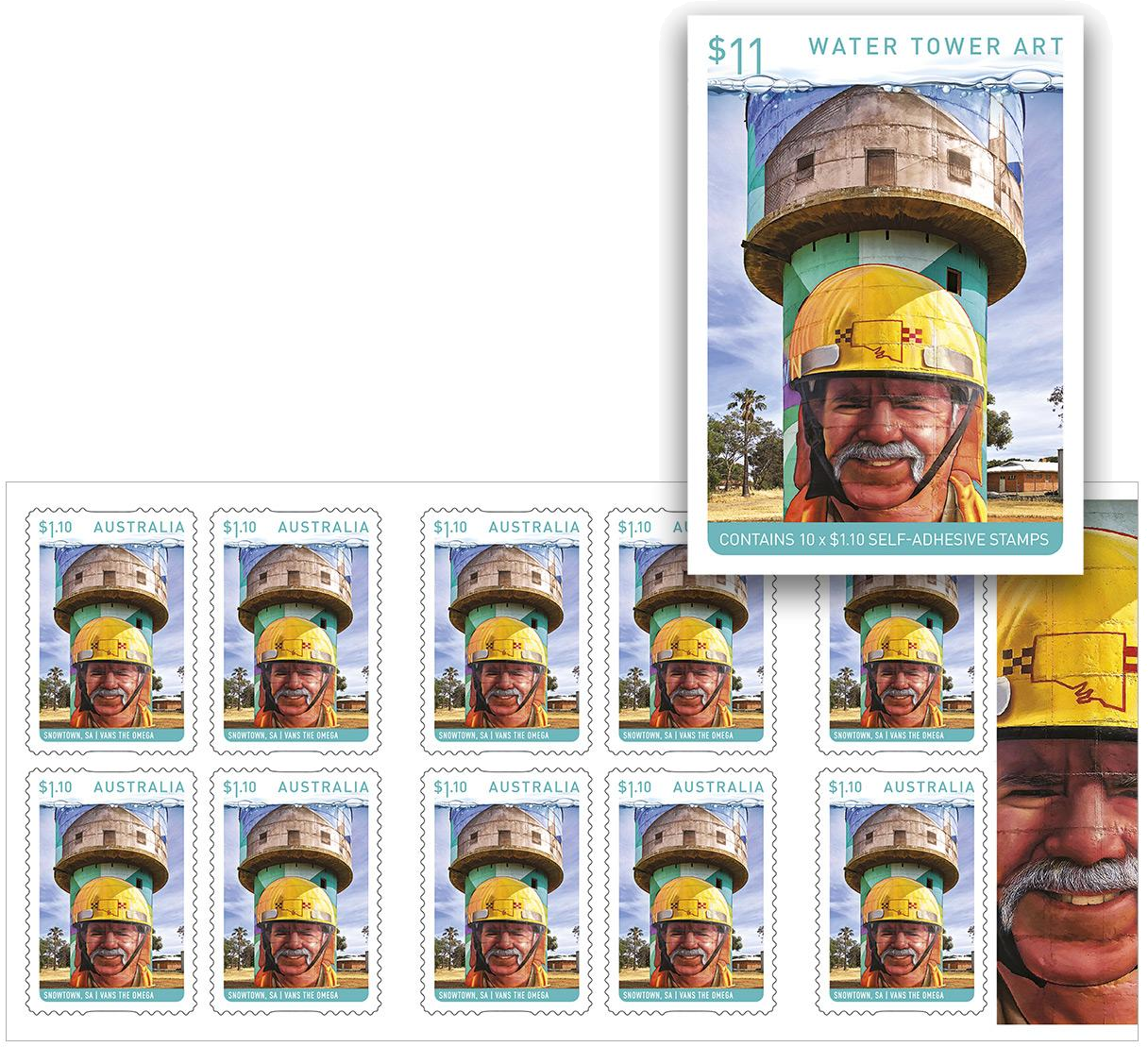 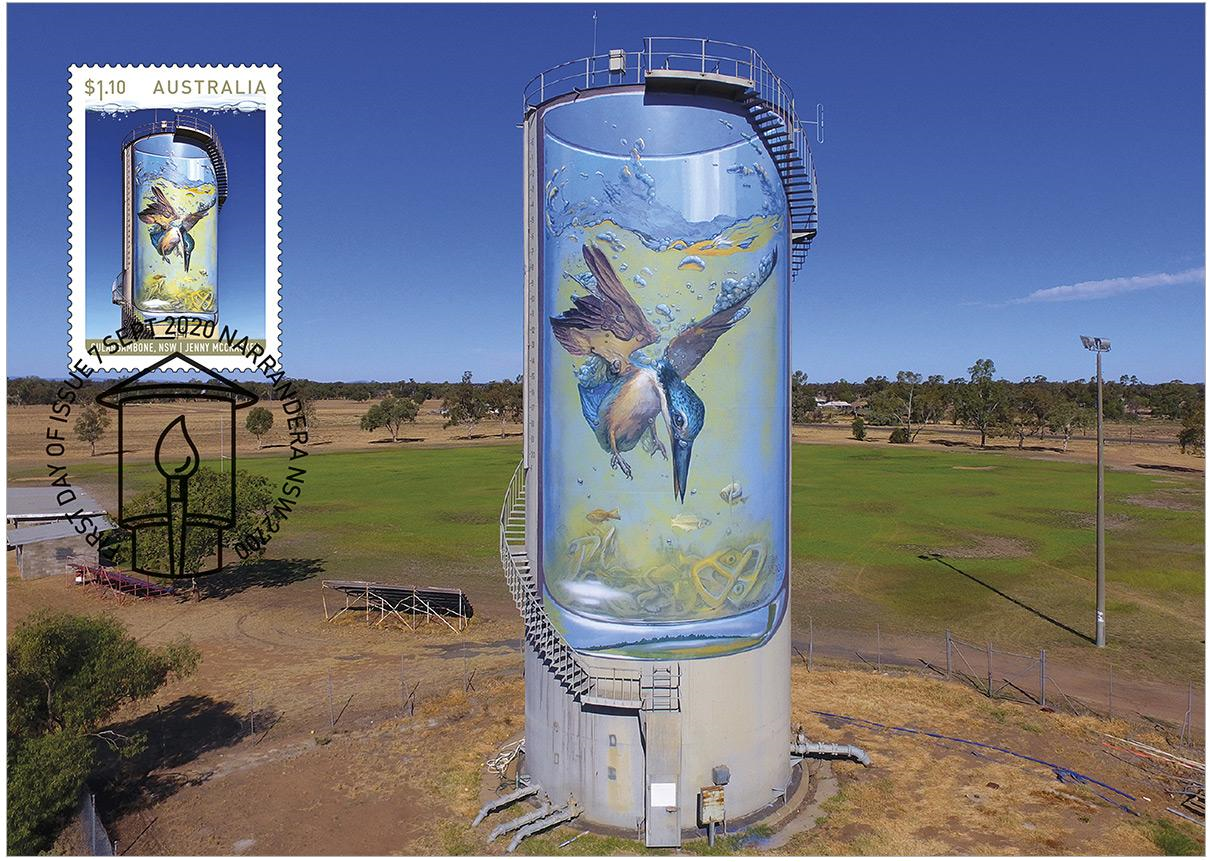 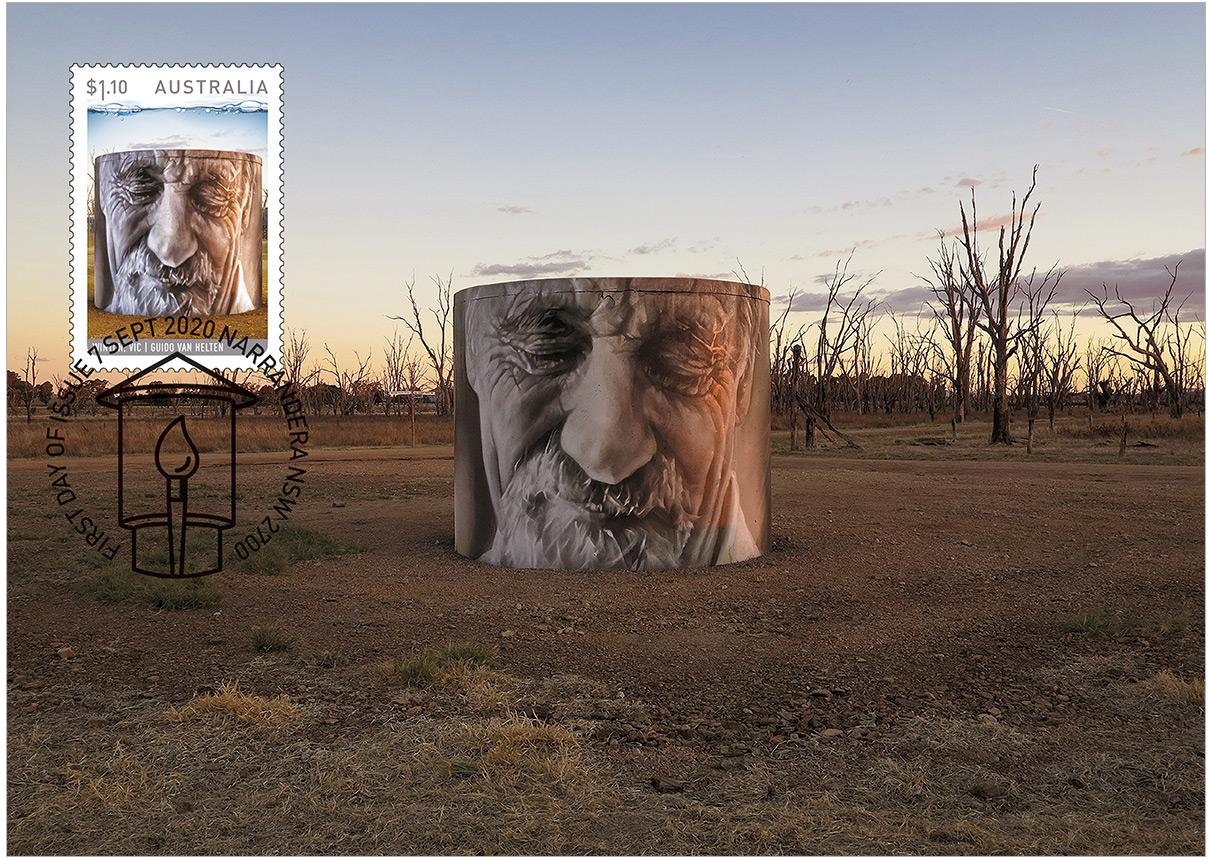 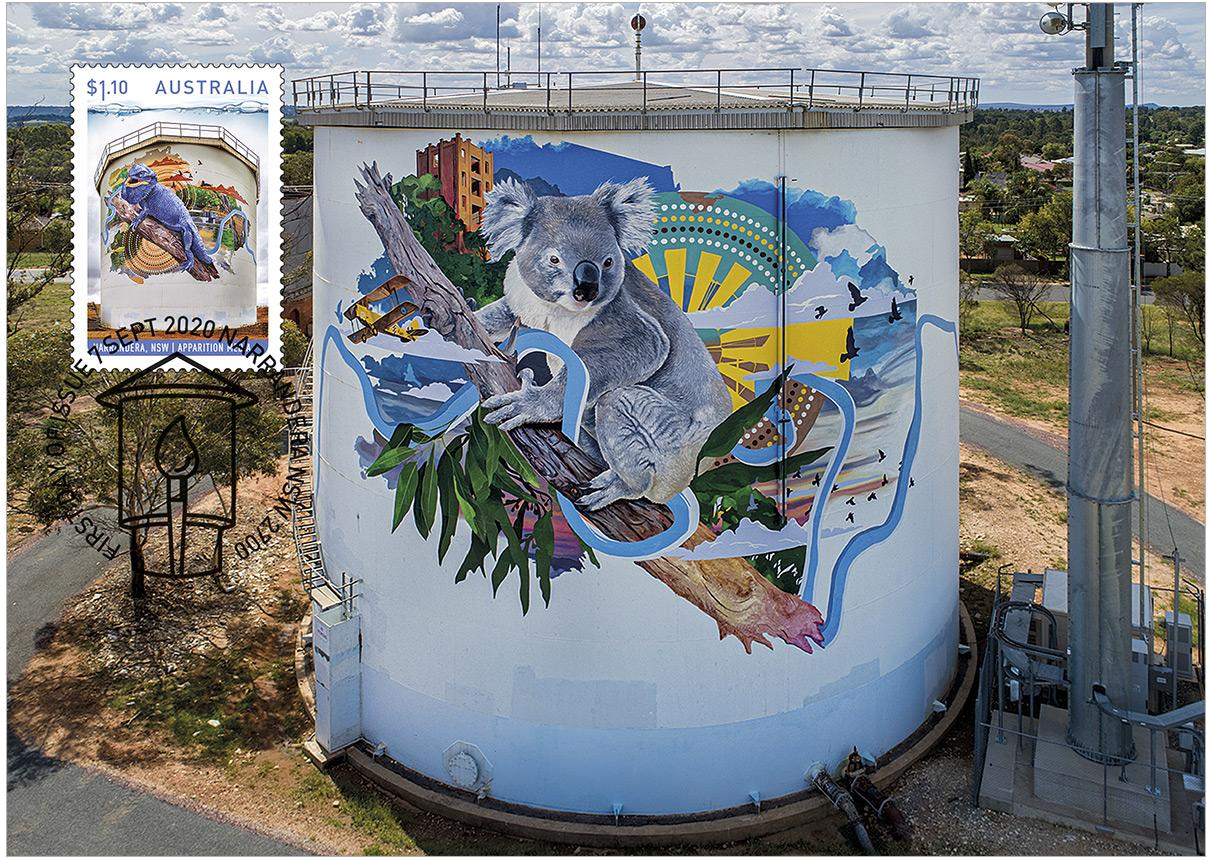 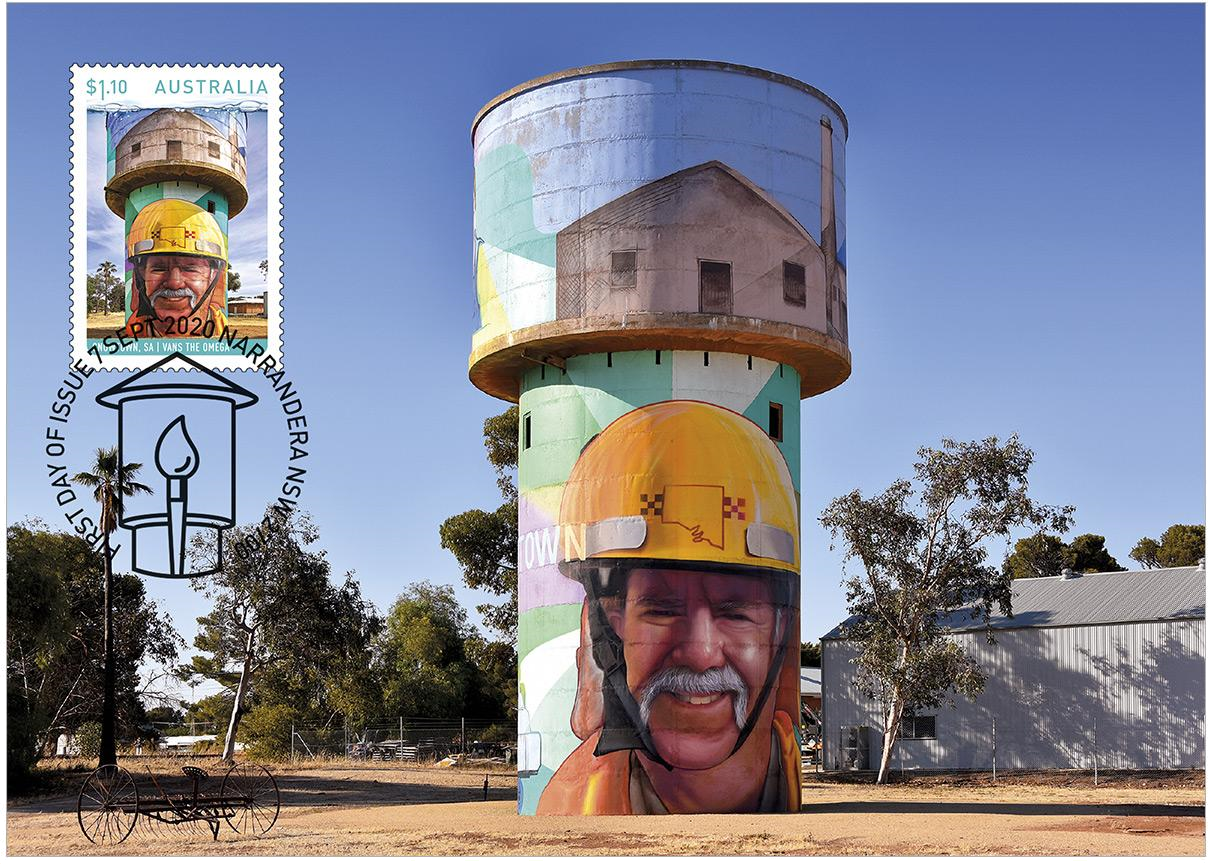 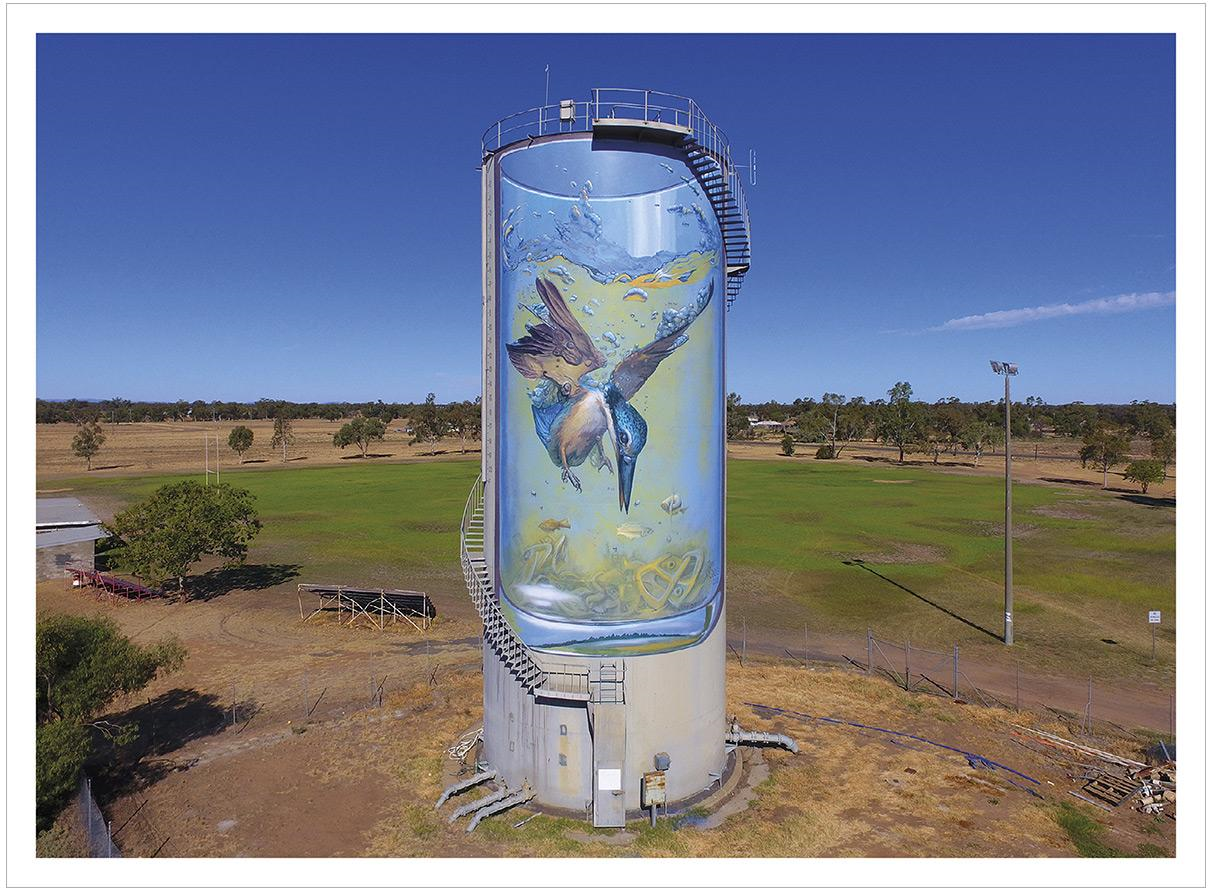 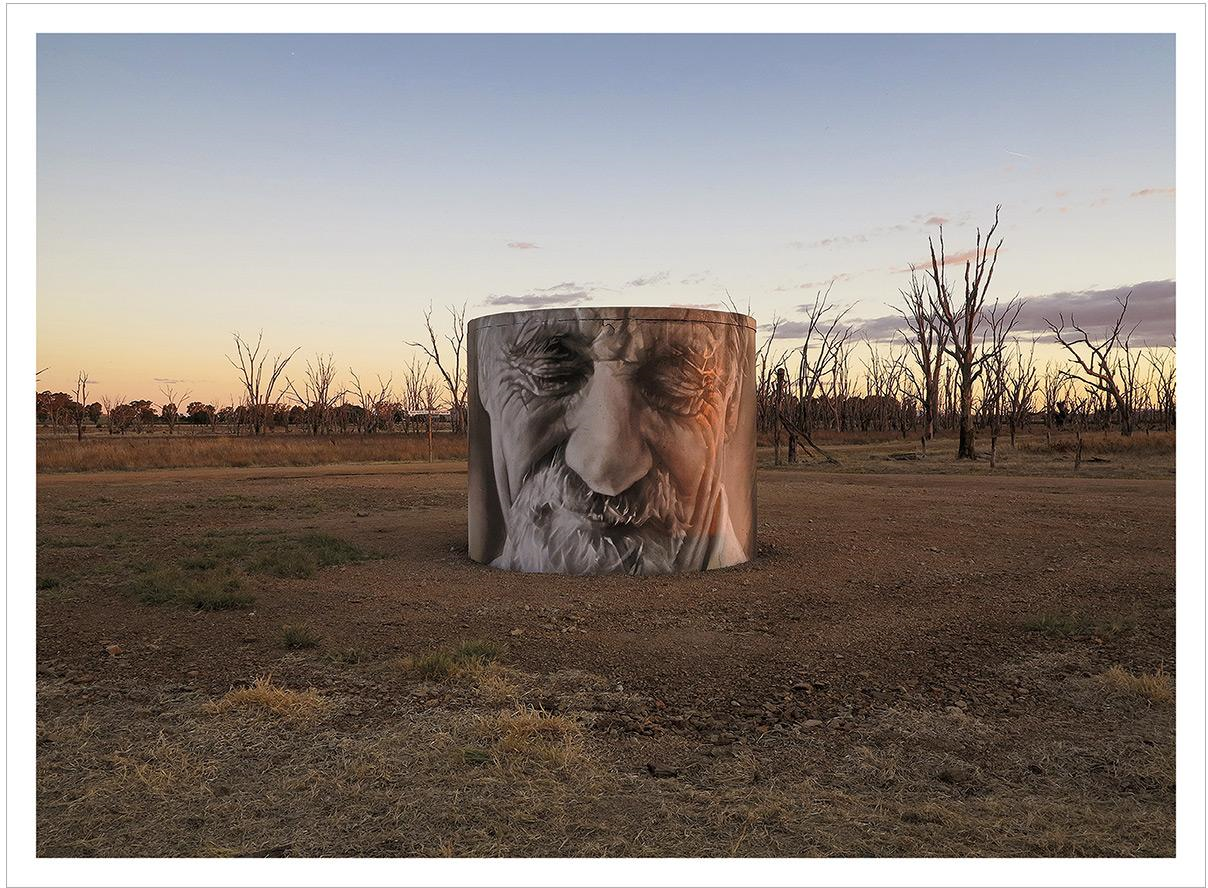 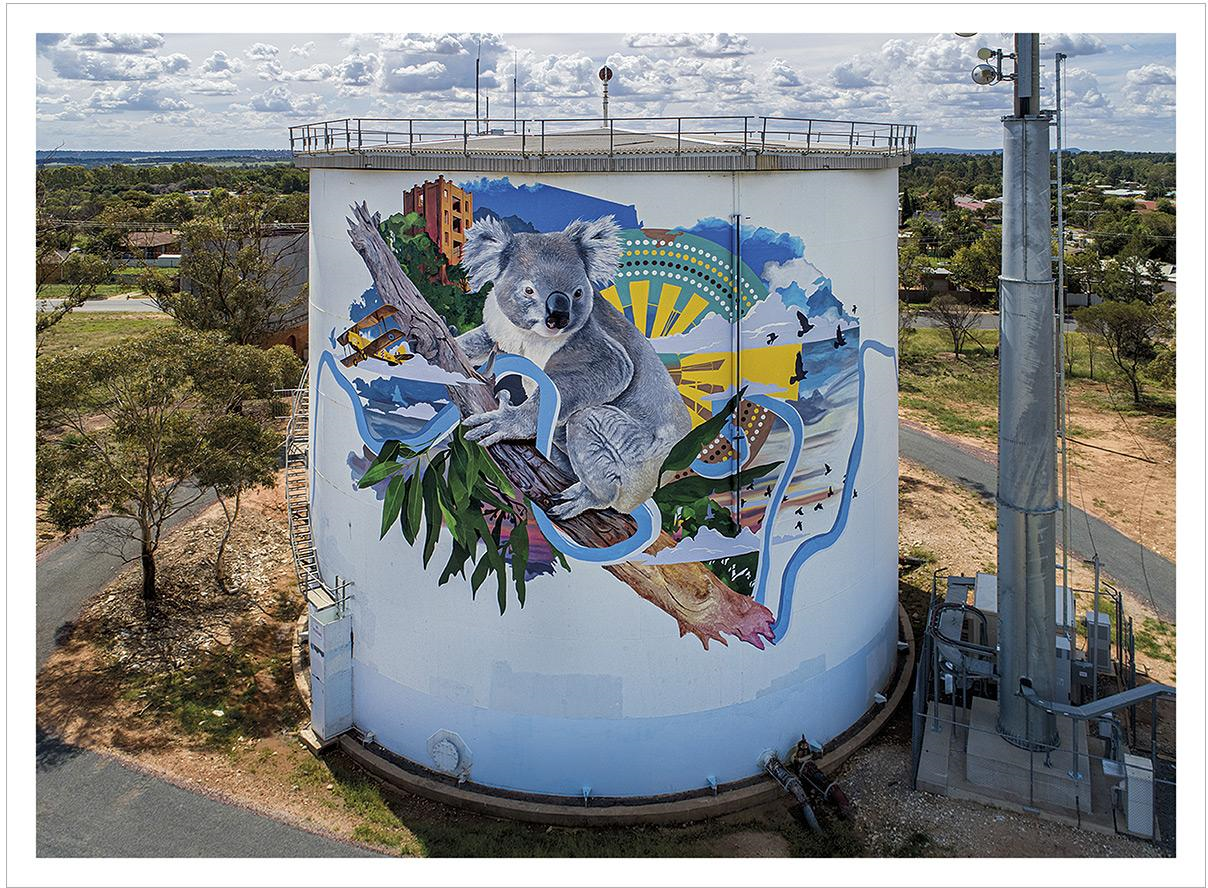 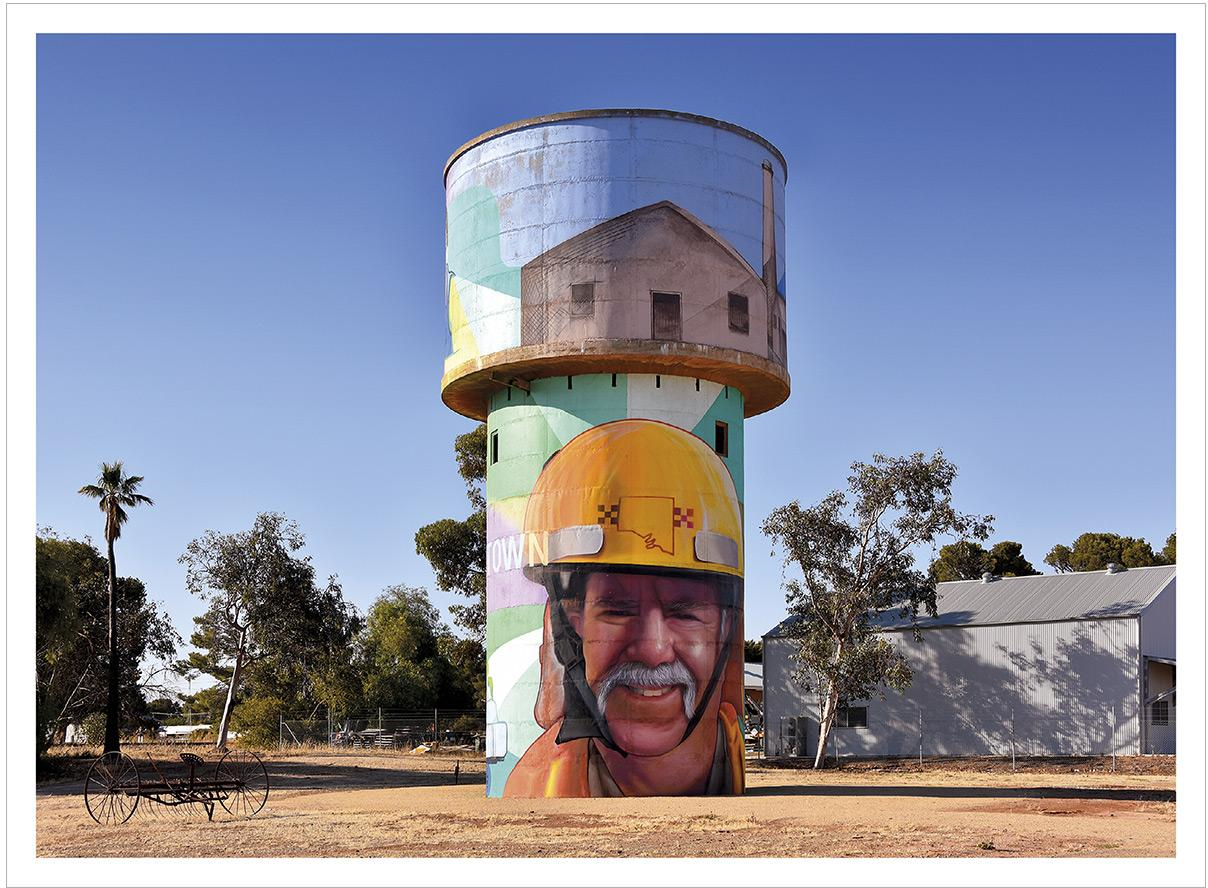