During the early Cretaceous Period, around 125 to 100 million years ago, what is now Australia lay near the South Pole, joined to Antarctica as part of the ancient supercontinent Gondwana. At that time, much of inland Australia, including the present-day opal fields of Coober Pedy, Andamooka and Mintabie in South Australia, and White Cliffs in New South Wales, was covered by the Eromanga Sea, a large, shallow body of water home to marine molluscs, fish, and swimming reptiles such as plesiosaurs. Where the opal-producing town of Lightning Ridge in New South Wales and the opal fields of western Queensland are now, floodplains covered with lush green forests of conifer trees and ferns were intersected by rivers flowing to the sea – a landscape teeming with freshwater invertebrates, fish, turtles and crocodiles, birds, mammals and dinosaurs.

Over millions of years, some of the plant and animal remains buried in these ancient waterways were transformed into opalised fossils. These opalised fossils formed when opal replaced buried plant or animal remains, forming replicas of their original shapes, surface textures and sometimes, internal structures. Fossils provide important insights into life on Earth, including how it has responded to changes in geology, landforms, climate and ecosystems. With only rare exceptions, Australia is the only place in the world where opalised fossils are found.

This stamp issue presents four opalised fossils from the early Cretaceous period – three from the collection of the Australian Opal Centre, Lightning Ridge, NSW, and one from the South Australian Museum. The stamps present a photograph of each fossil, together with a graphic motif that shows the plant or creature in its living, non-fossilised form. The graphic element down the side of each stamp is a nod to the spherical internal microstructure of opal itself.

Read our blog interview with Jenni Brammall, from the Australian Opal Centre, and Ben McHenry, from the South Australian Museum. 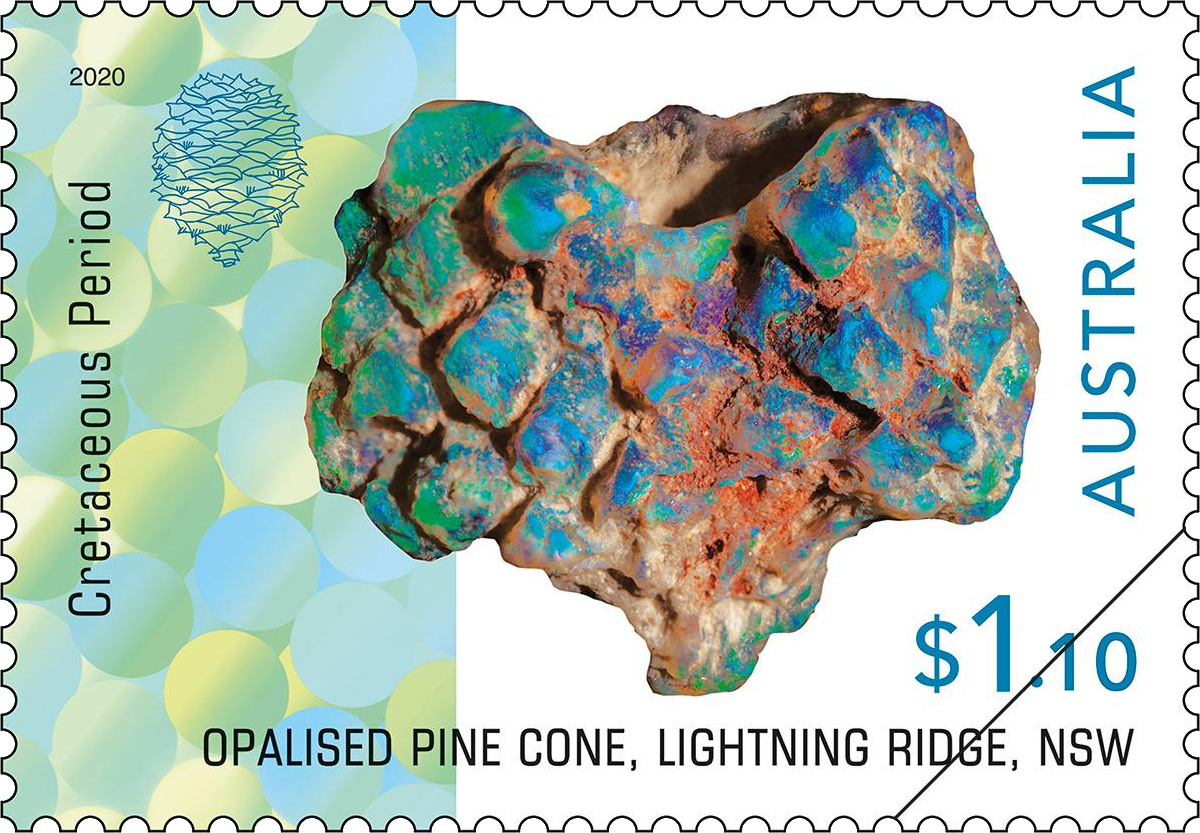 The pine cone fossil featured on the stamp was found in Lightning Ridge, New South Wales and forms part of the collection of the Australian Opal Centre, a not-for-profit museum, research and cultural centre, which houses a diverse collection of opalised fossils and precious opal. The pine cone species was likely a relative of today’s Bunya Pine, a tree in the Araucarian conifer group, prevalent during the Cretaceous Period. 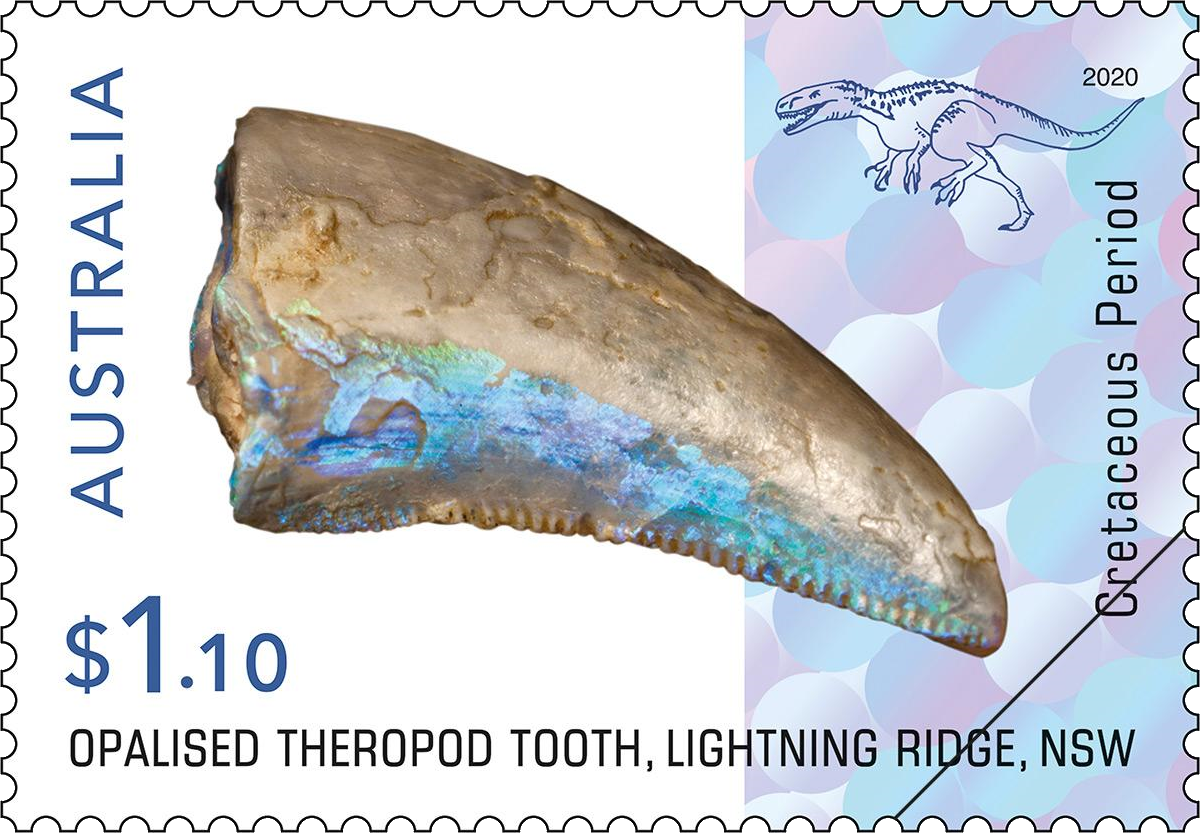 The theropod tooth fossil was also found in Lightning Ridge, New South Wales. Significant recent discoveries in the Lightning Ridge area include Australia’s largest carnivorous dinosaur, nicknamed “Lightning Claw” for the impressive size of its claws (up to around 25 centimetres long). 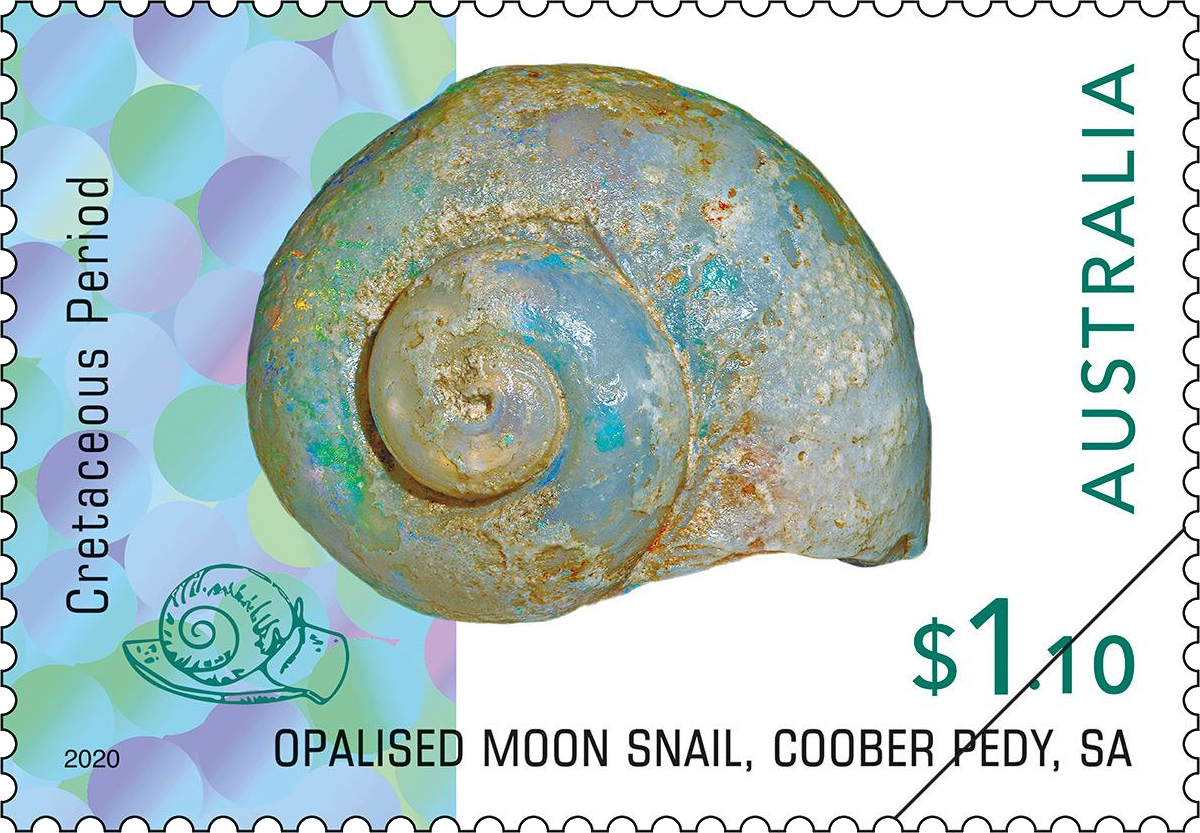 The moon snail fossil on the stamp was found in Coober Pedy, South Australia and is held by the South Australian Museum. This moon snail species, Euspira reflecta, is the most common opalised fossil snail species in the region. This member of the Naticidae family was an active sea-floor predator, preying on sessile molluscs such as mussels and cockles. Euspira would use its file-like teeth (radula) to drill a hole through the protective bivalve shell and then eat its victim from the inside out. Opalised cockles and mussels exhibiting the tell-tale hole drilled by Euspira are also frequent discoveries at Coober Pedy.

The stamp photograph is by Ben McHenry, courtesy the South Australian Museum. 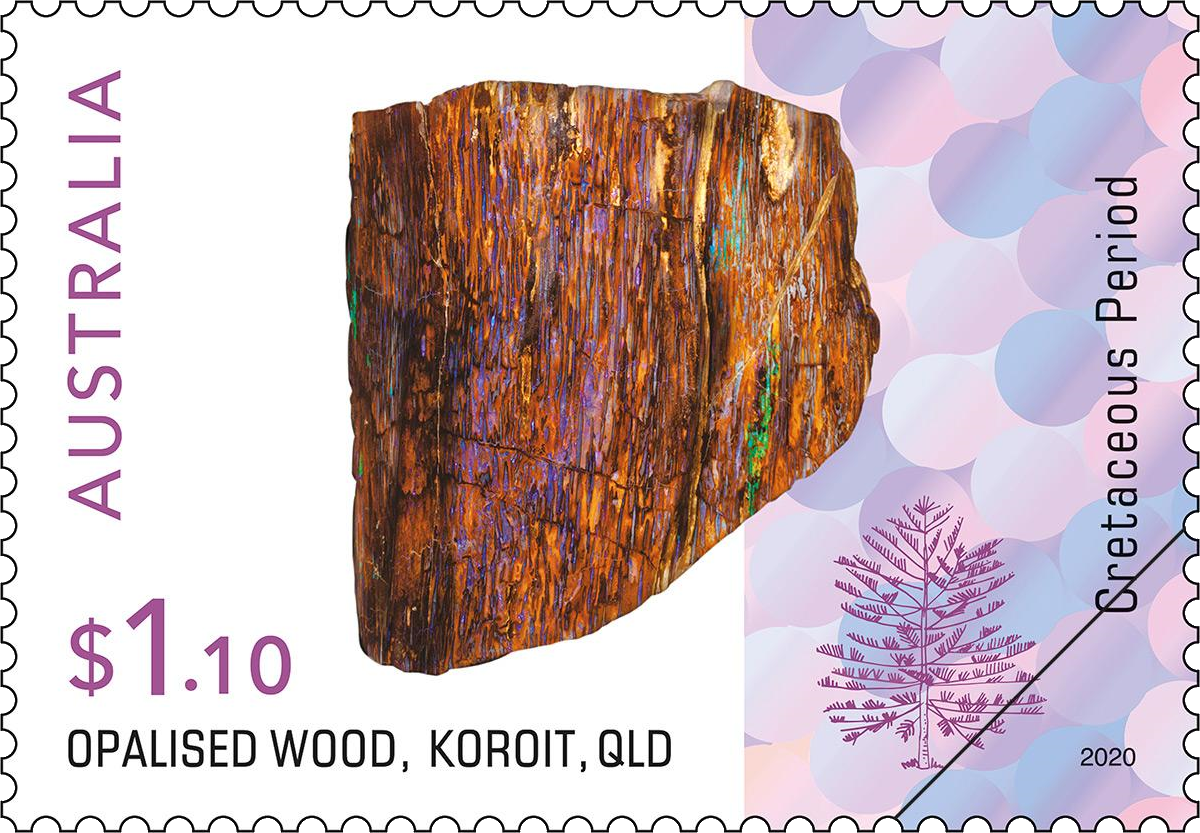 The opalised wood fossil featured on the stamp was found in Queensland’s Koroit opal fields, a rich source of boulder opal (opal found in ironstone boulders). While the identity of the tree species is unknown, like the pine cone fossil, it also was likely from a species in the Araucarian conifer group. 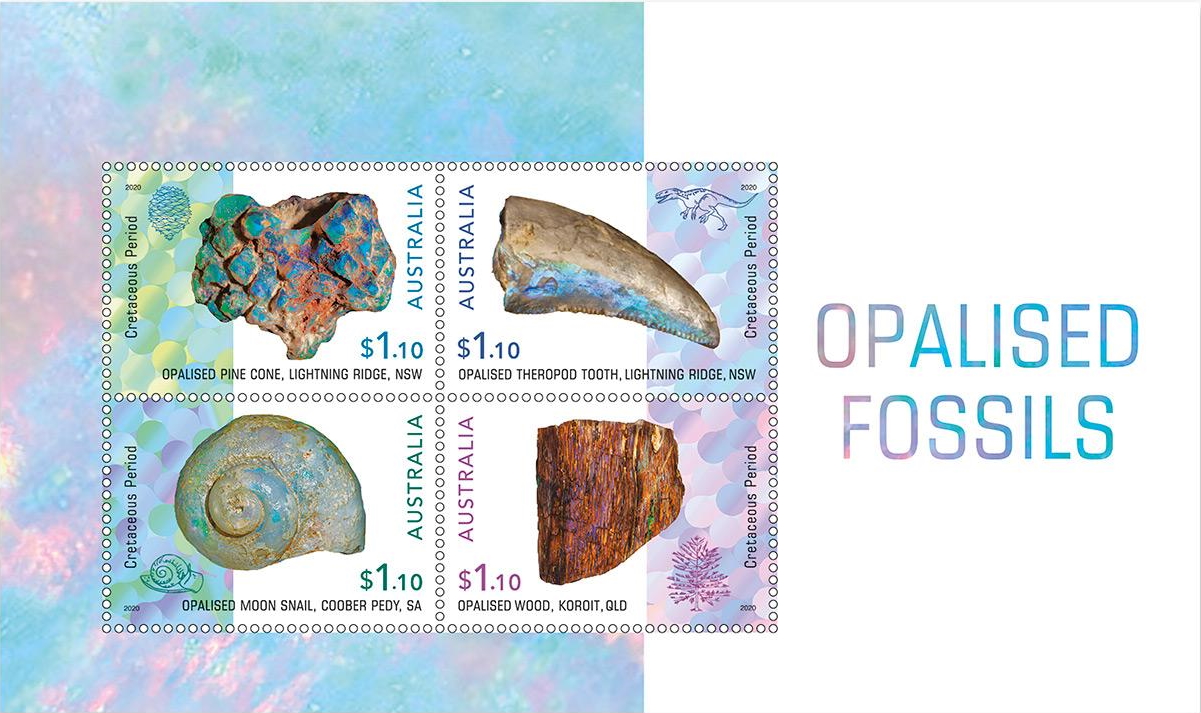 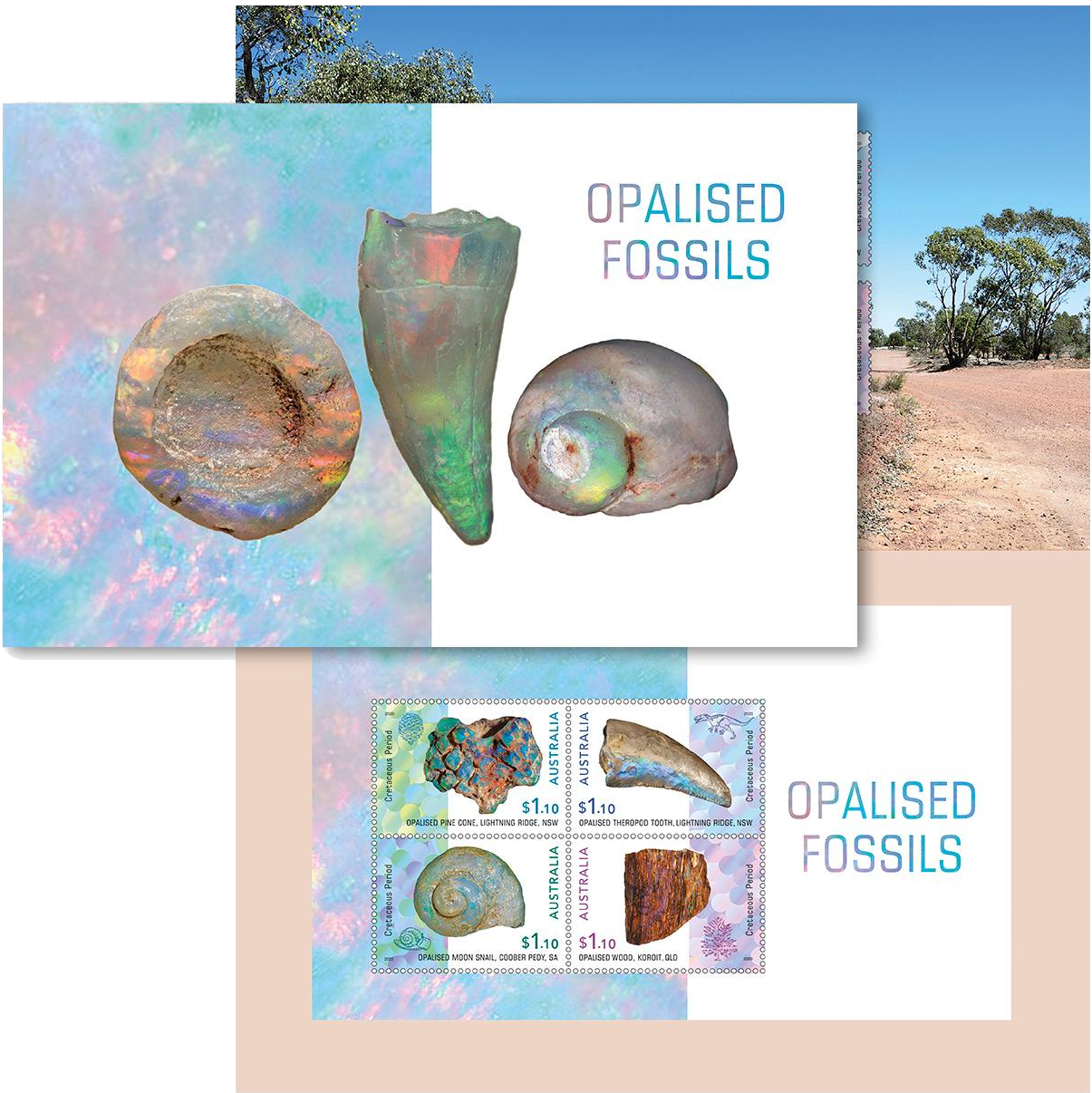 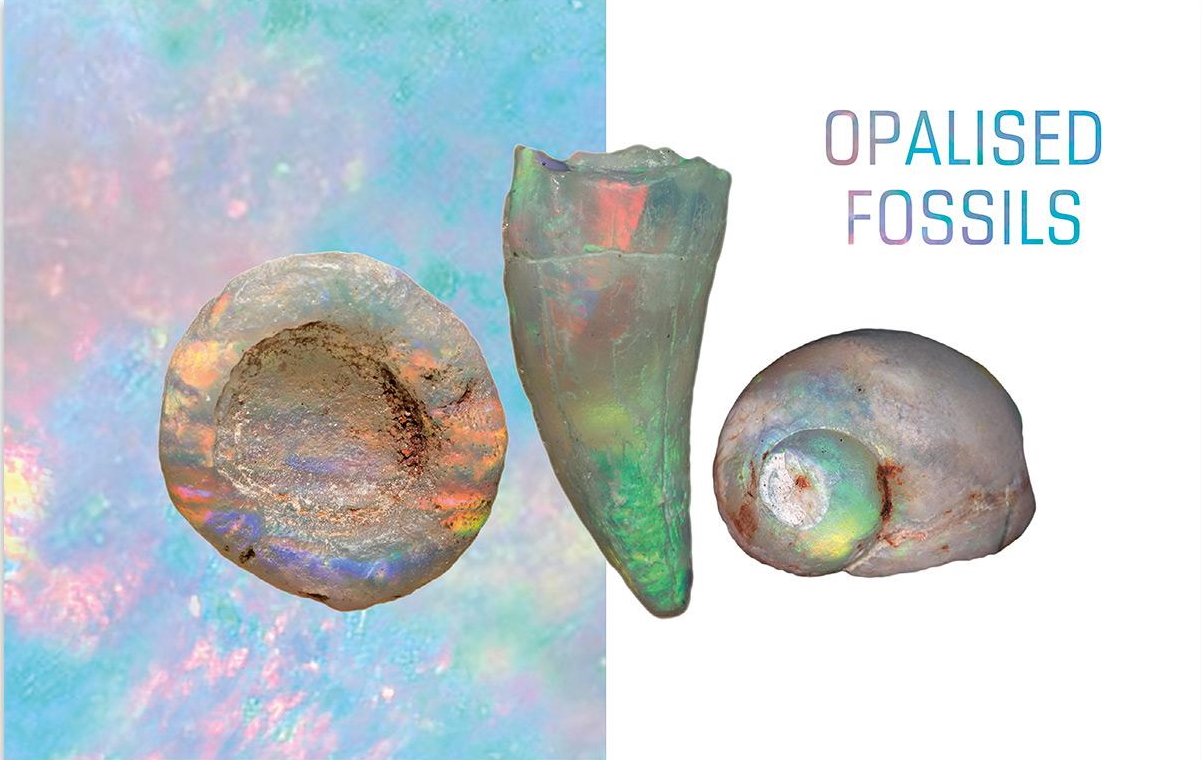 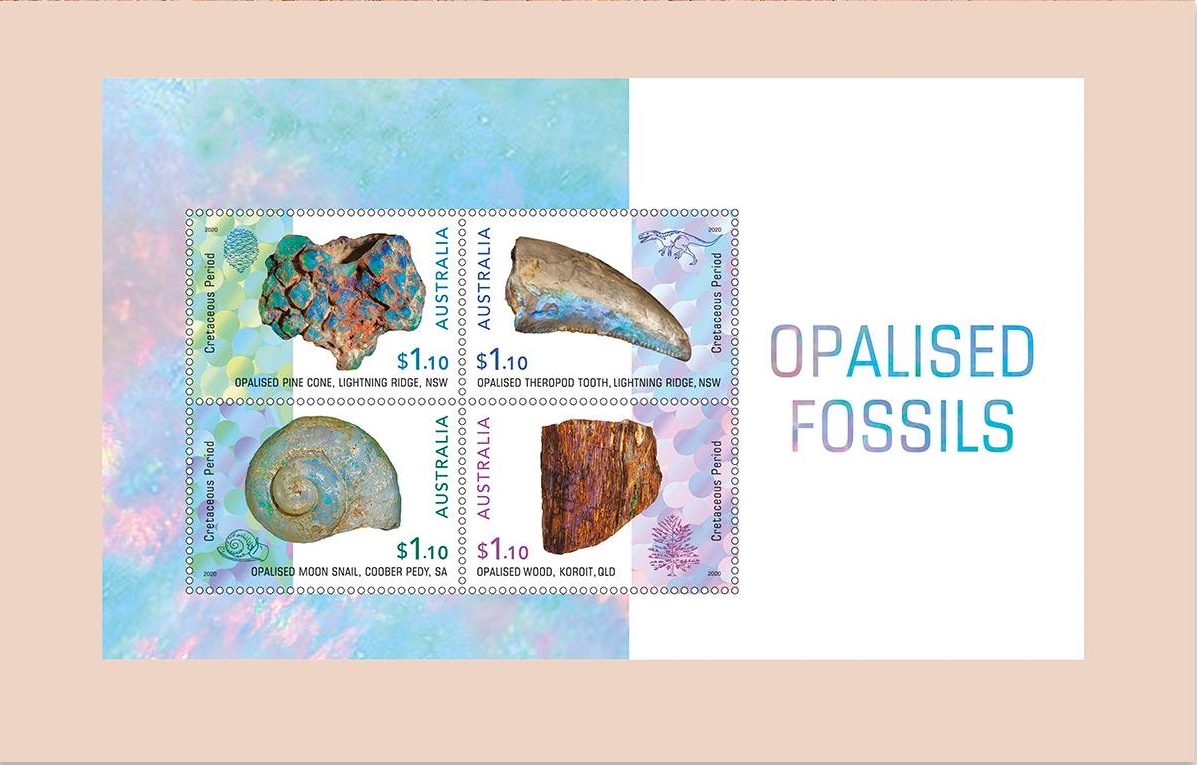 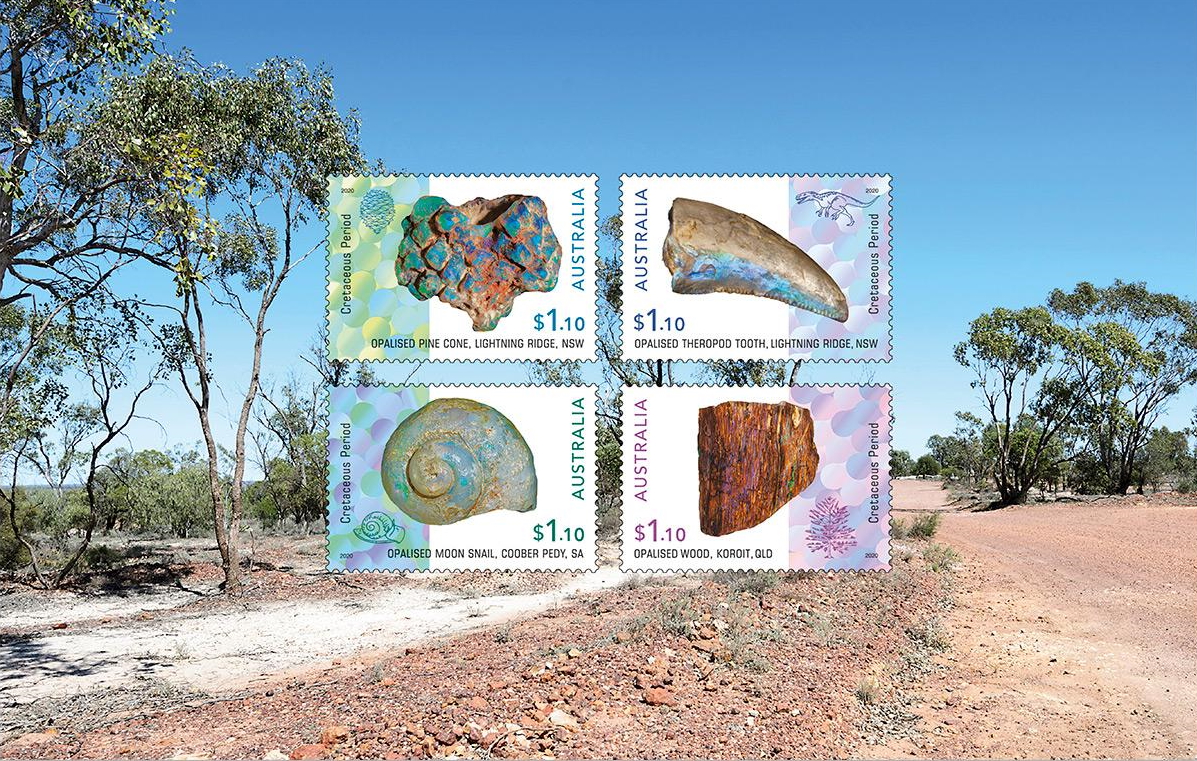 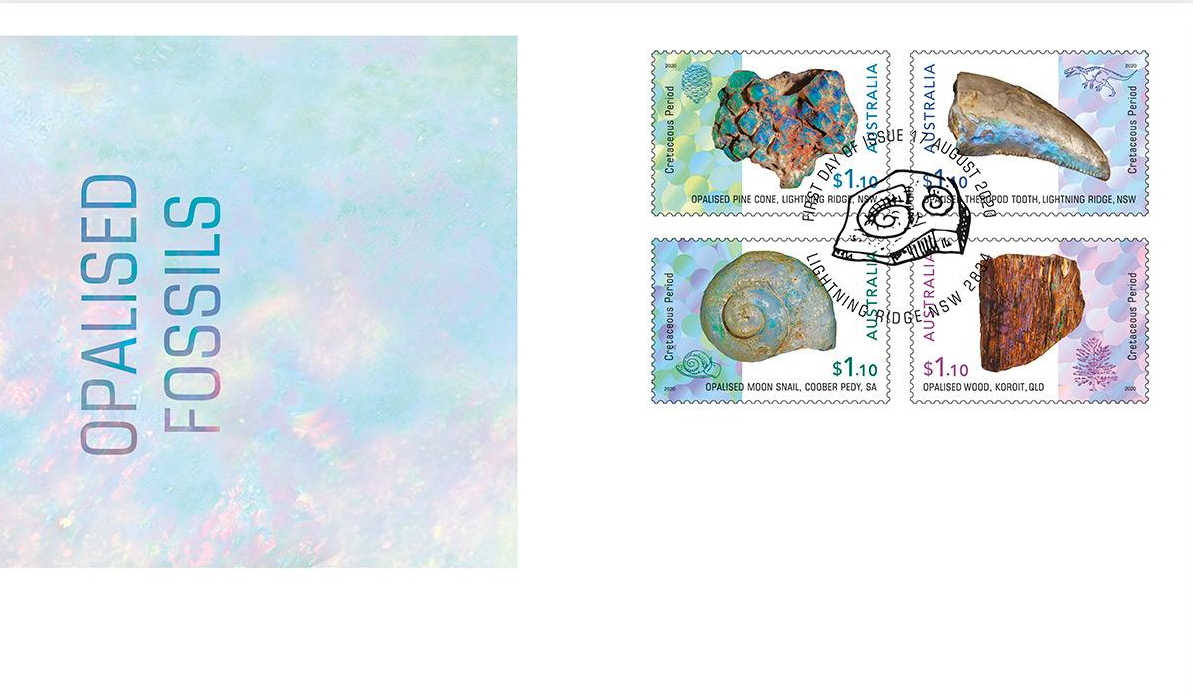 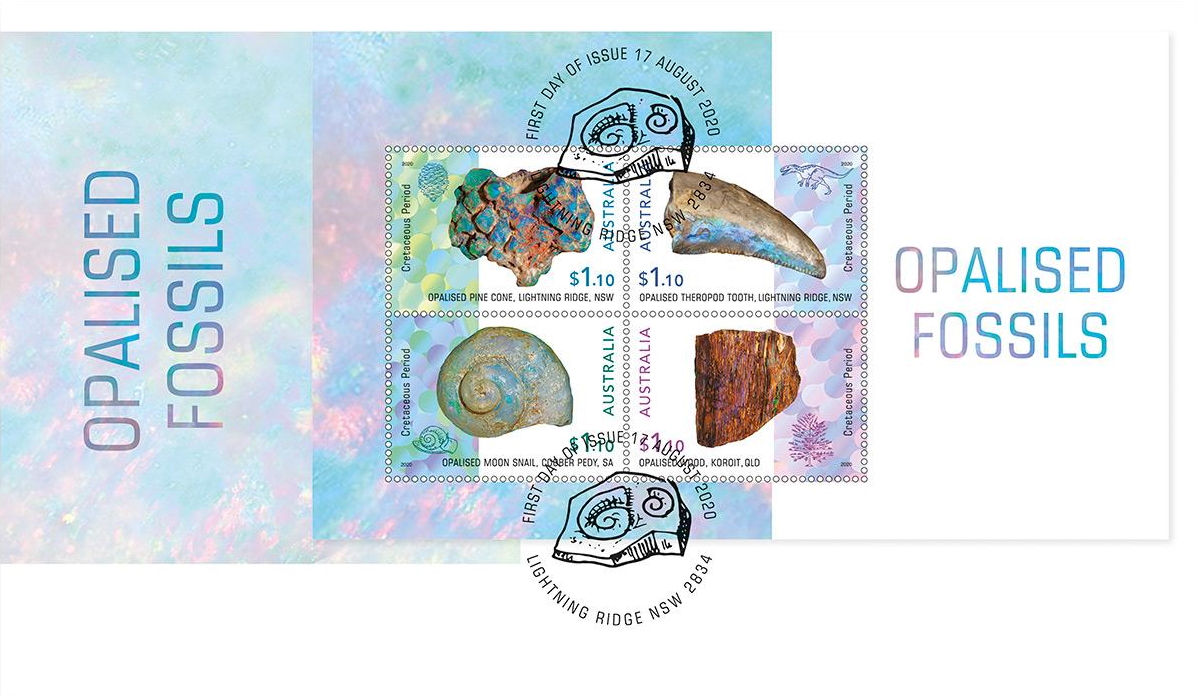 Self-Adhesive Booklets of 10 and 20 Stamps: 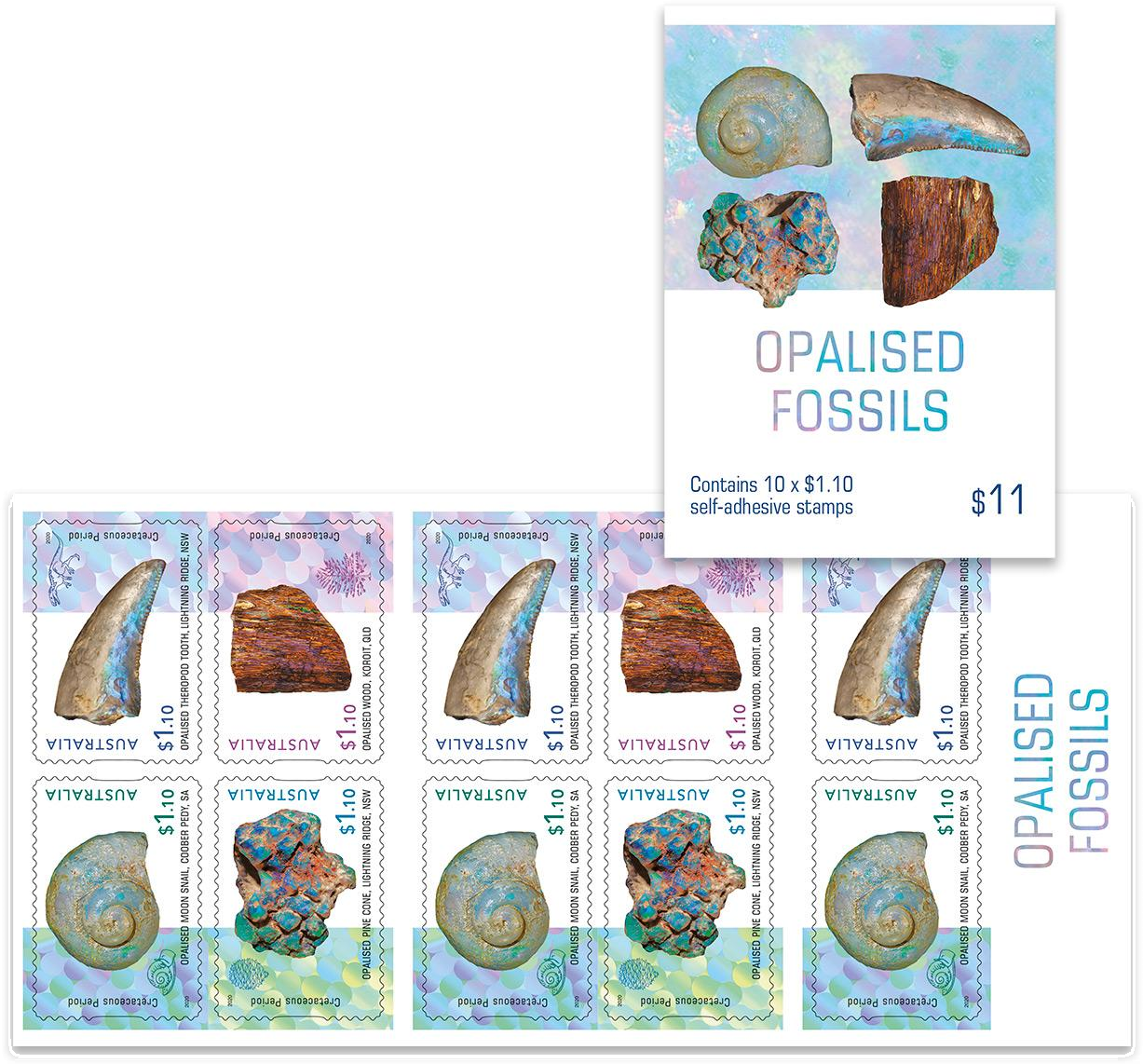 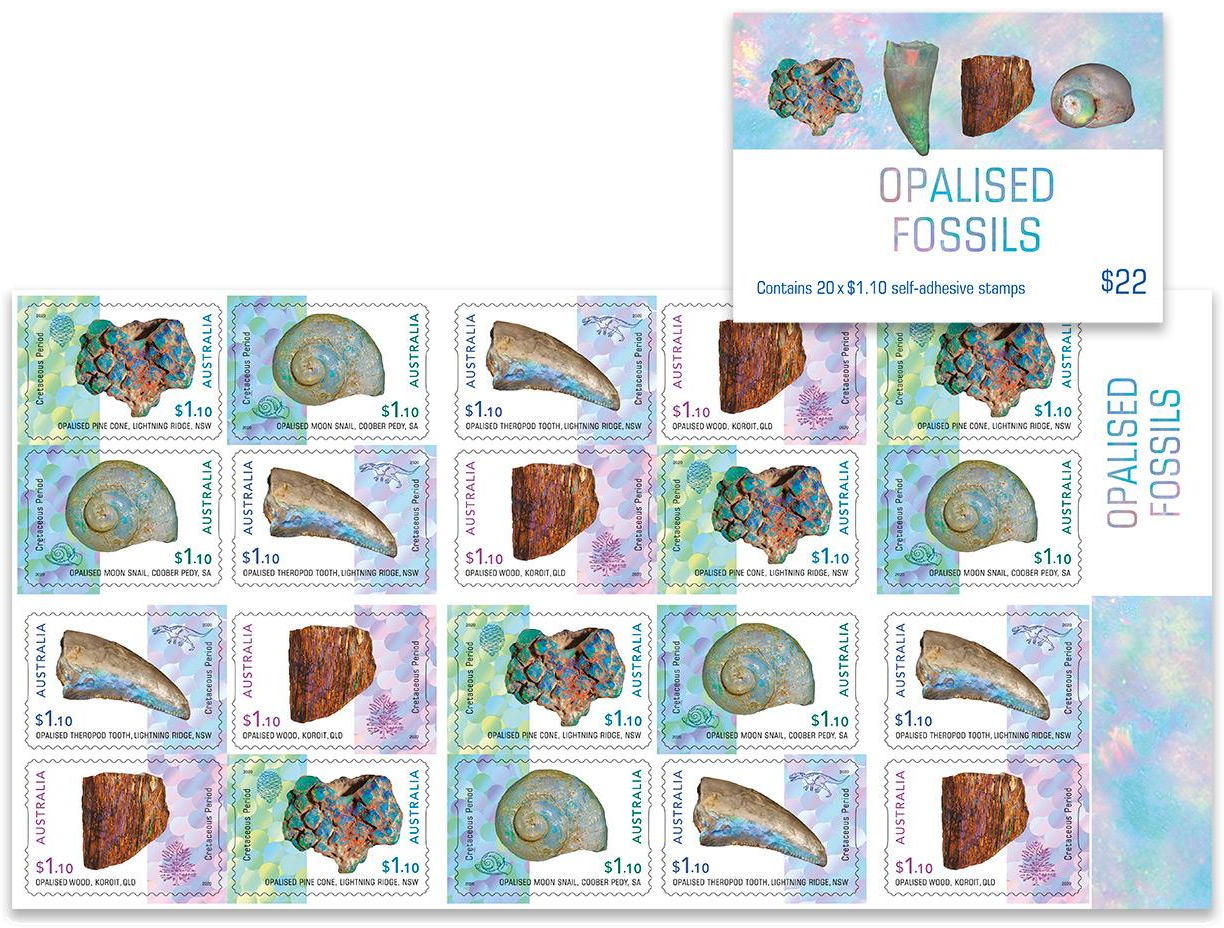 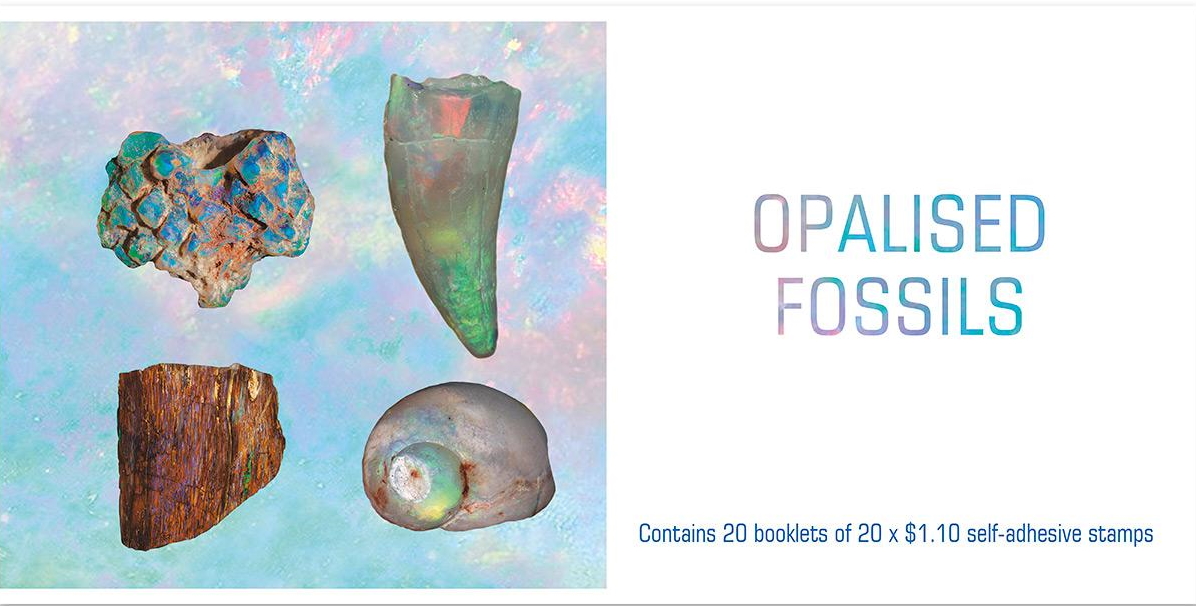 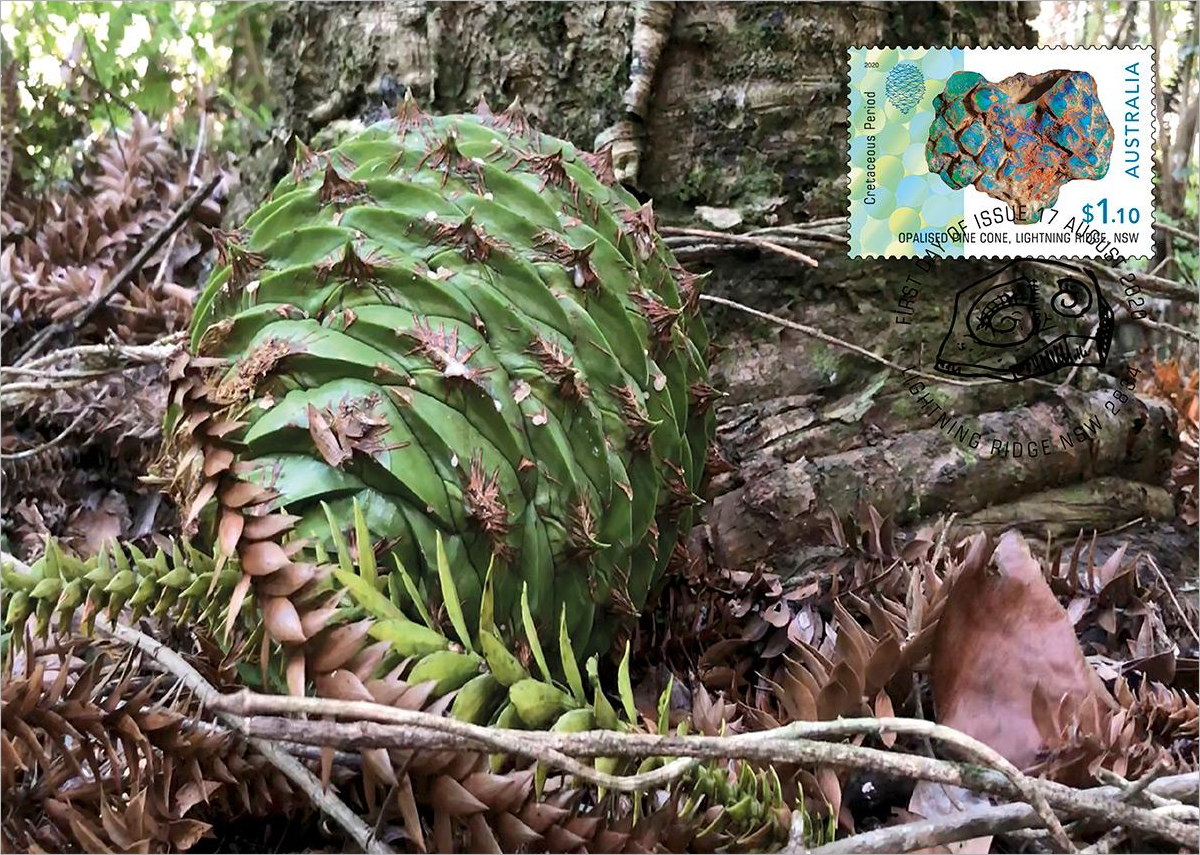 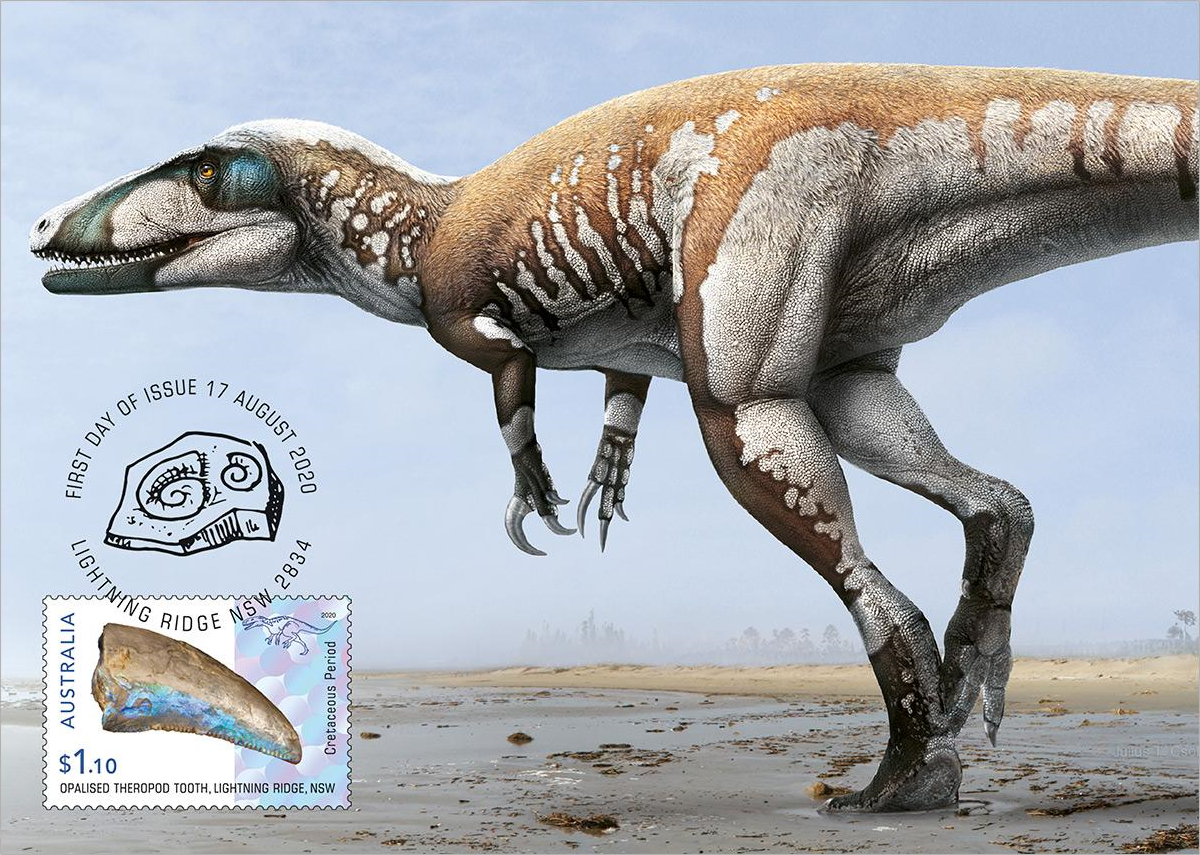 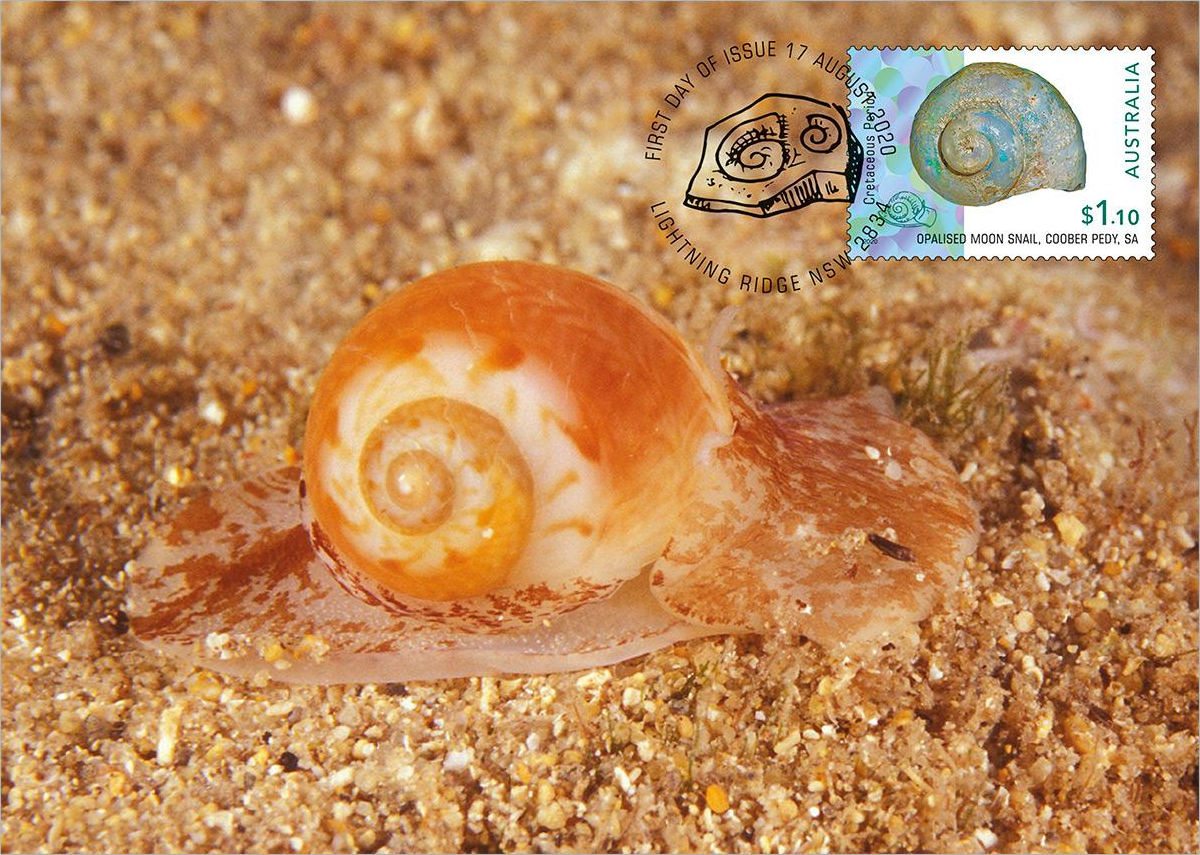 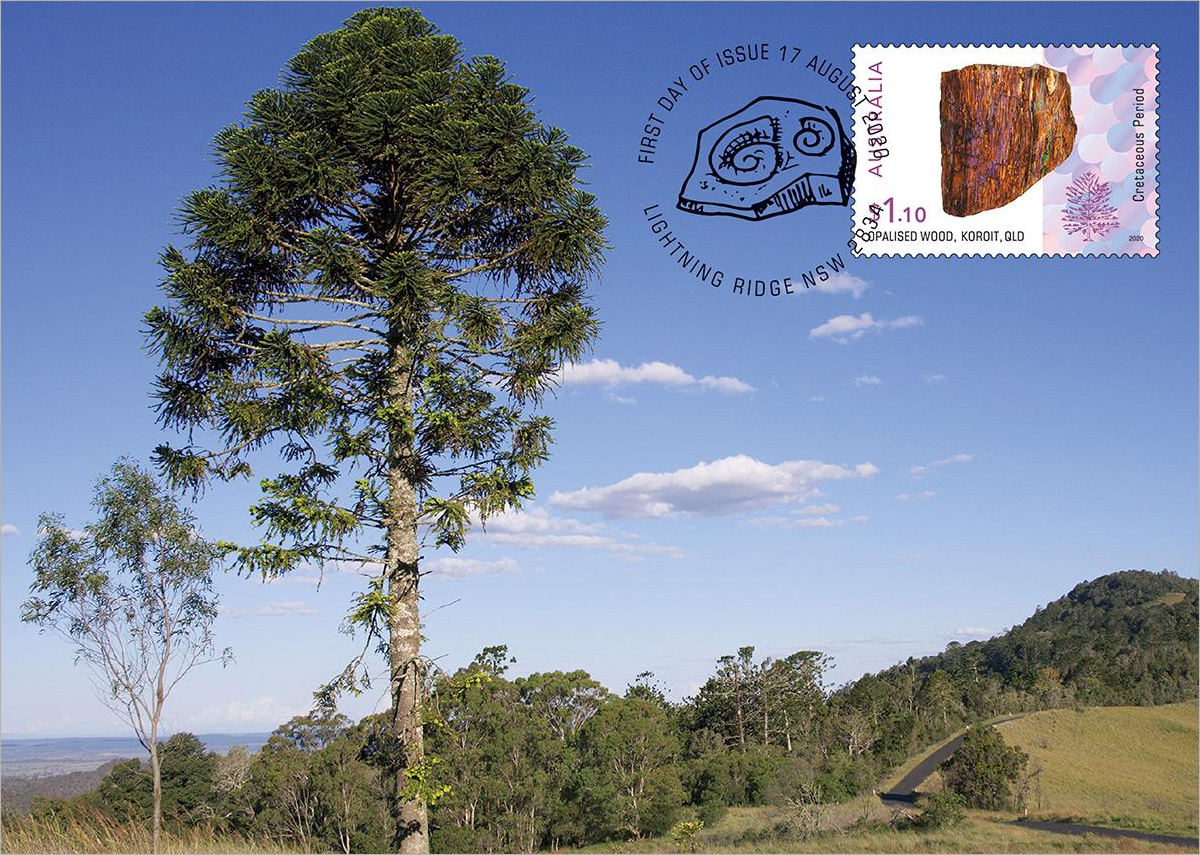