From August 2019, the impact of climate change was on show in Australia. A long season of intense and extensive bushfires began to ravage Queensland and New South Wales, and then fires spread to the Australian Capital Territory, Victoria and South Australia. Eventually, every state and territory had some level of bushfire impact. Some 12 million hectares burned across town, rural and remote areas, including in bushland and protected areas.

The bushfires were responsible for the conservatively estimated loss of 1.25 billion animals, bringing many native animal and plant species ever closer to the brink of extinction. Immediately in the wake of the fires, conservationists, scientists, government agencies, land managers, wildlife rescue and rehabilitation groups, and individual carers galvanized into action to rescue and rehabilitate animals. They quickly put provisions in place to support the recovery of wildlife, including triage centres, evacuations, appropriate supplementary food and water drops, feral predator controls, and fencing of remnant vegetation. Data collection and monitoring was also increased to determine the severity of impact on species. It is a long road to recovery for many animals, but the stories of success provide a source of optimism for the survival of our much-loved wildlife.

The stamps in this issue show six animal species that the government’s Wildlife and Threatened Species Bushfire Recovery Expert Panel identified for immediate conservation management, in the wake of the fires. The stamp issue is also this year’s release for Stamp Collecting Month. 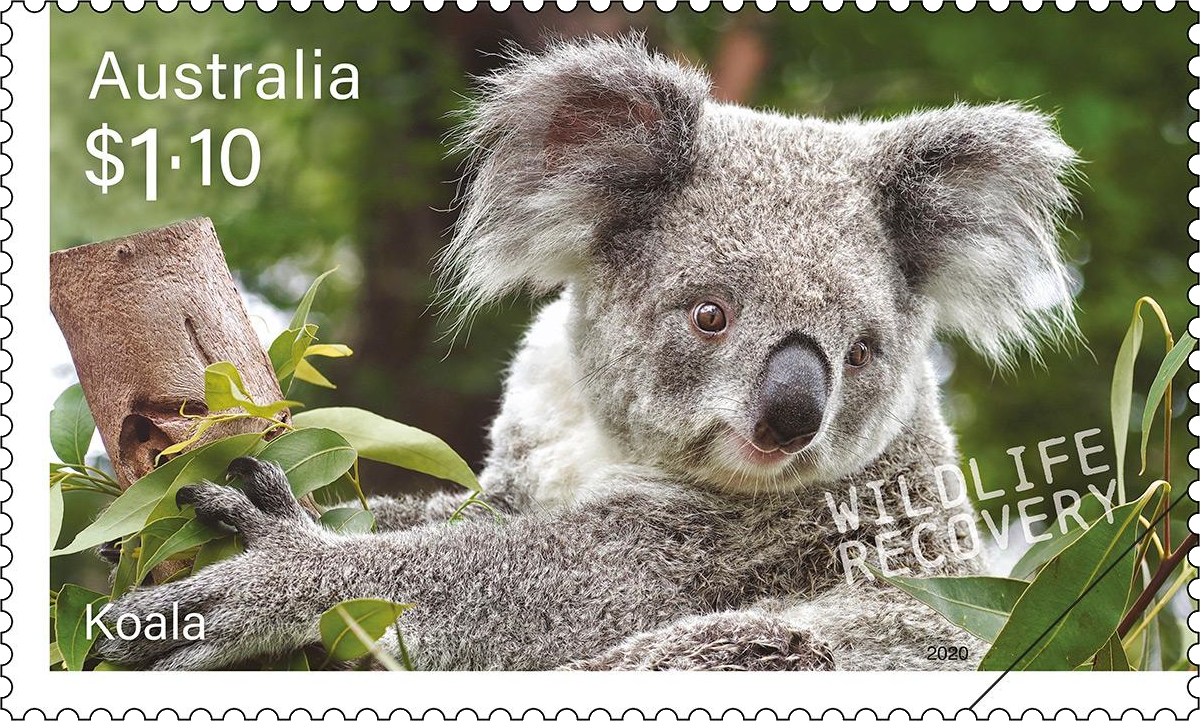 The Koala (Phascolarctos cinereus) is one of Australia’s most distinctive and loved native animals. This tree-dwelling marsupial occurs naturally in eucalypt-dominated areas from Queensland down the eastern seaboard to Victoria. Populations have also been introduced onto some islands along that coast, as well as onto Kangaroo Island and to the Murray River and Adelaide regions in South Australia. Listed as vulnerable in New South Wales, Queensland and the Australian Capital Territory, the herbivorous Koala is a specialist feeder, almost exclusively consuming eucalypt leaves.

It is estimated that half of Australia’s population of around 300,000 Koalas were lost in the recent bushfires. In many areas during and after the bushfires, Koalas were rescued and evacuated to triage centres and shelters, and as they have been remediated, they’ve been released into unaffected areas with plentiful eucalypt trees.

The stamp photograph is by Andreas Ruhz/Shutterstock.com. 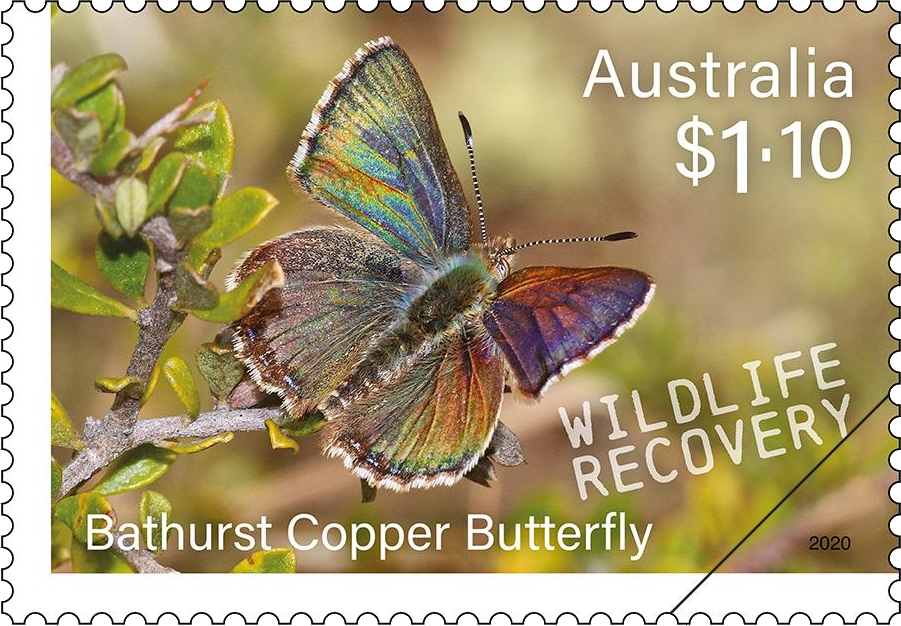 The Bathurst Copper Butterfly is listed as vulnerable in the national Environmental Protection and Biodiversity Conservation Act (EPBC) and endangered in the state’s Threatened Species Conservation Act. First described in 1978, this butterfly is at risk due to its limited distribution, degraded habitat and land use (clearing, grazing, spraying, weed invasion), and illegal collection. Its habitat requirements and weak flight restrict its distribution.

The stamp photograph is by Martin Purvis. 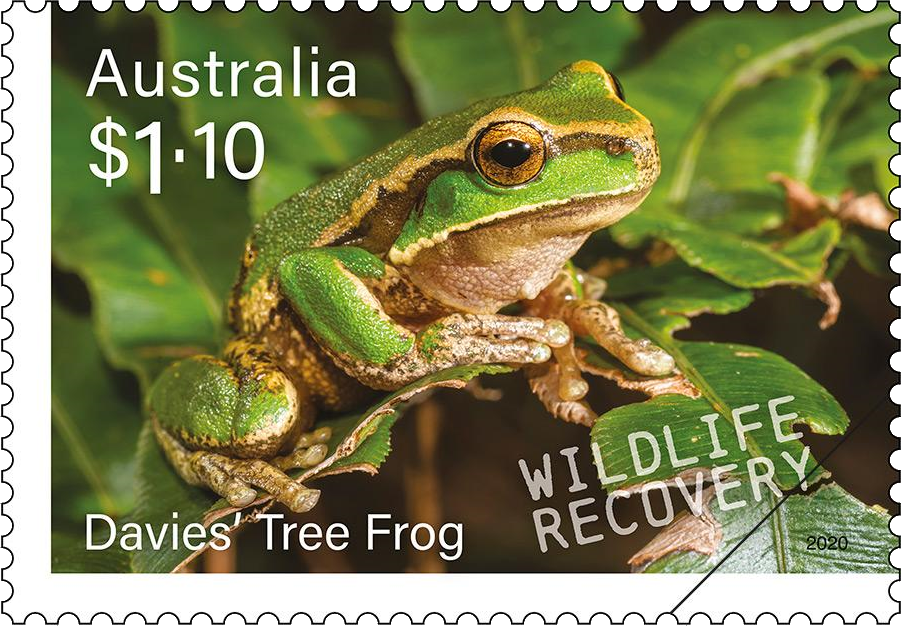 The Davies’ Tree Frog (Litoria daviesae) is a medium-sized frog, with females growing to 6.5 centimetres in length and males to around 5.3 centimetres. The Davies’ Tree Frog occurs in small populations on the eastern escarpment of the Great Dividing Range and the adjacent tablelands, between Carrai Plateau and Barrington Tops. It is found at elevations above 400 metres in forest, shrubland and wetland areas, where it is associated with clean upland streams with well-vegetated banks. Adults remain close to water, and the larvae develop in streams.

This endemic frog is listed as vulnerable in New South Wales, as well as on the International Union for Conservation (IUCN) Red List. It is threatened by forest clearance for agriculture, and some streams have been stocked with exotic fish species, which are thought to feed on its tadpoles. The restricted range of the Davies’ Tree Frog increases its vulnerability, a fact highlighted by the recent bushfires.

The stamp photograph is by Henry Cook/Getty Images. 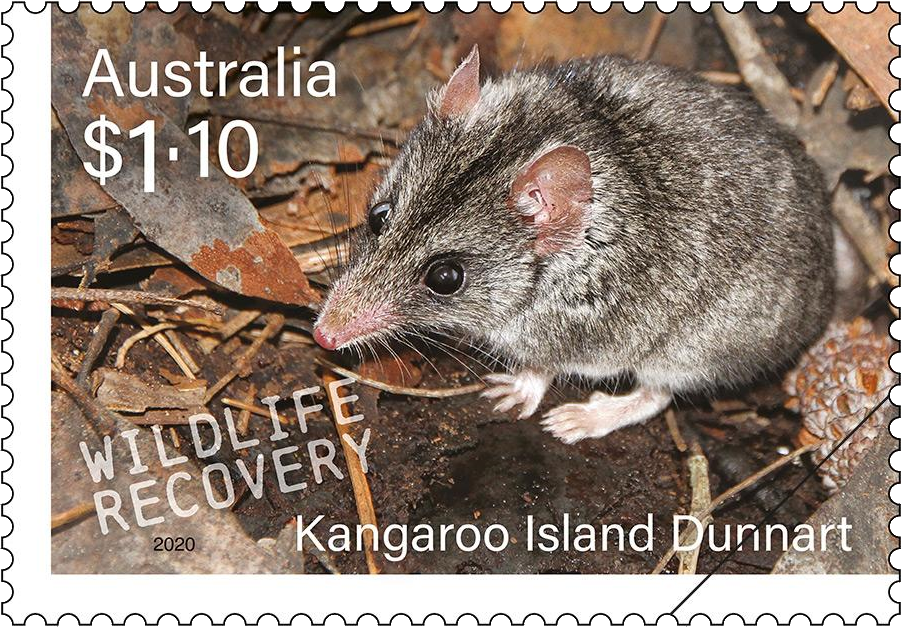 The Kangaroo Island Dunnart (Sminthopsis griseoventer aitkeni) is a small, nocturnal marsupial and the island’s only endemic mammal. It was classified as critically endangered by the IUCN in 2008. Numbering between 300 and 500 individuals before the 2019–20 bushfires, which burnt approximately one-third of the island, the dunnart has since been named by the federal government as one of Australia’s most at-risk species.

Major threats include habitat loss through extensive and high-intensity bushfires and land clearing, as well as predation from invasive species such as feral cats. Immediately following the bushfires, Kangaroo Island Land for Wildlife in partnership with the Australian Wildlife Conservancy and private landholders completed a 14-hectare emergency feral-animal-proof fence around a known Kangaroo Island Dunnart population. This builds on the monitoring and threat reduction efforts already in place for this critically endangered species. A feral cat eradication program aims to rid Kangaroo Island of feral cats by 2030, further protecting the dunnart and other threatened wildlife species that call the island home.

The stamp photograph is by Peter Hammond. 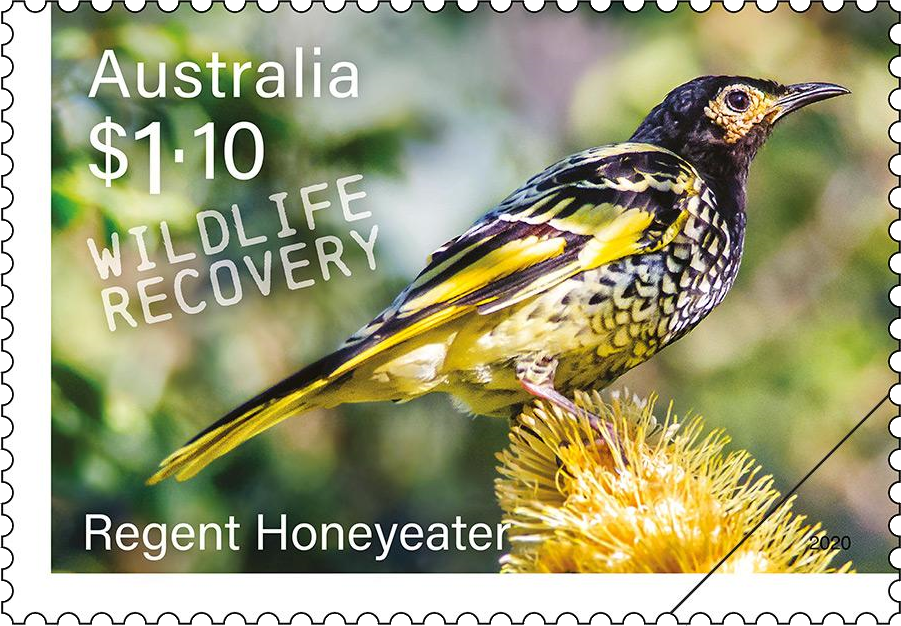 The Regent Honeyeater (Anthochaera phrygia) is a striking, gregarious honeyeater. It traditionally occupied eucalypt woodlands in eastern Australia from Rockhampton to Adelaide, but its territory has been significantly reduced through the loss and degradation of its habitat and competition from aggressive species such as the Noisy Miner. This honeyeater is now present only in New South Wales and Victoria, where it is especially associated with the western slopes of the Great Dividing Range, an area greatly affected by the bushfires.

It is classified as critically endangered on national and state conservation lists, as well as on the IUCN Red List. Prior to the bushfires it was thought that its number could be as low as 400 in the wild. Conservation interventions have included captive breeding and release programs since the mid-1990s, which has had mixed results, habitat protection and restoration, and control measures of the competitive Noisy Miner.

The stamp photograph is by Alan Nichol. 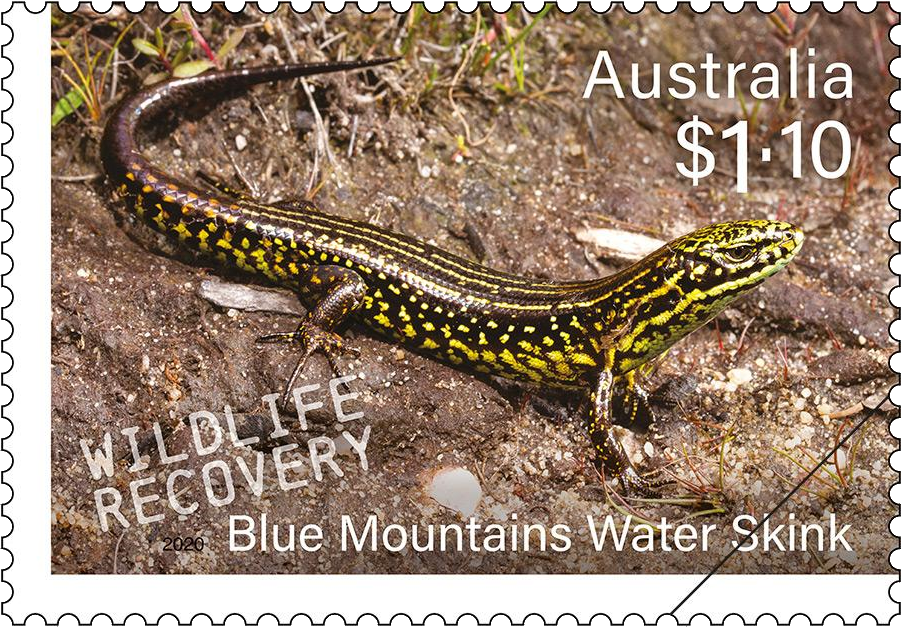 A medium-sized semi-aquatic lizard, the adult Blue Mountains Water Skink (Eulamprus leuraensis) is around 20 centimetres in total length, with its tail being around 12 centimetres. Found in high-elevation peat swamps in the middle and upper Blue Mountains, this skink is endemic to this region, west of Sydney, and occurs from Newnes Plateau in the north-west to just south of Hazelbrook in the south-east.

Prior to the bushfires, which swept through much of the Blue Mountains, this skink had been known to occur at around 70 wet sites. The Blue Mountains Water Skink is listed as endangered in national and state legislation, and in 2017 it was added to the IUCN Red List. Its main threats have been identified as longwall coalmining in the Newnes Plateau, which affects groundwater resources; land use, including urbanisation, grazing and recreational activities; and bushfires, including hazard-reduction fires.

The stamp photograph is by Stephen Zozaya.

Gutter Strips from Full Sheets of 50 (25 for Koala Stamp) 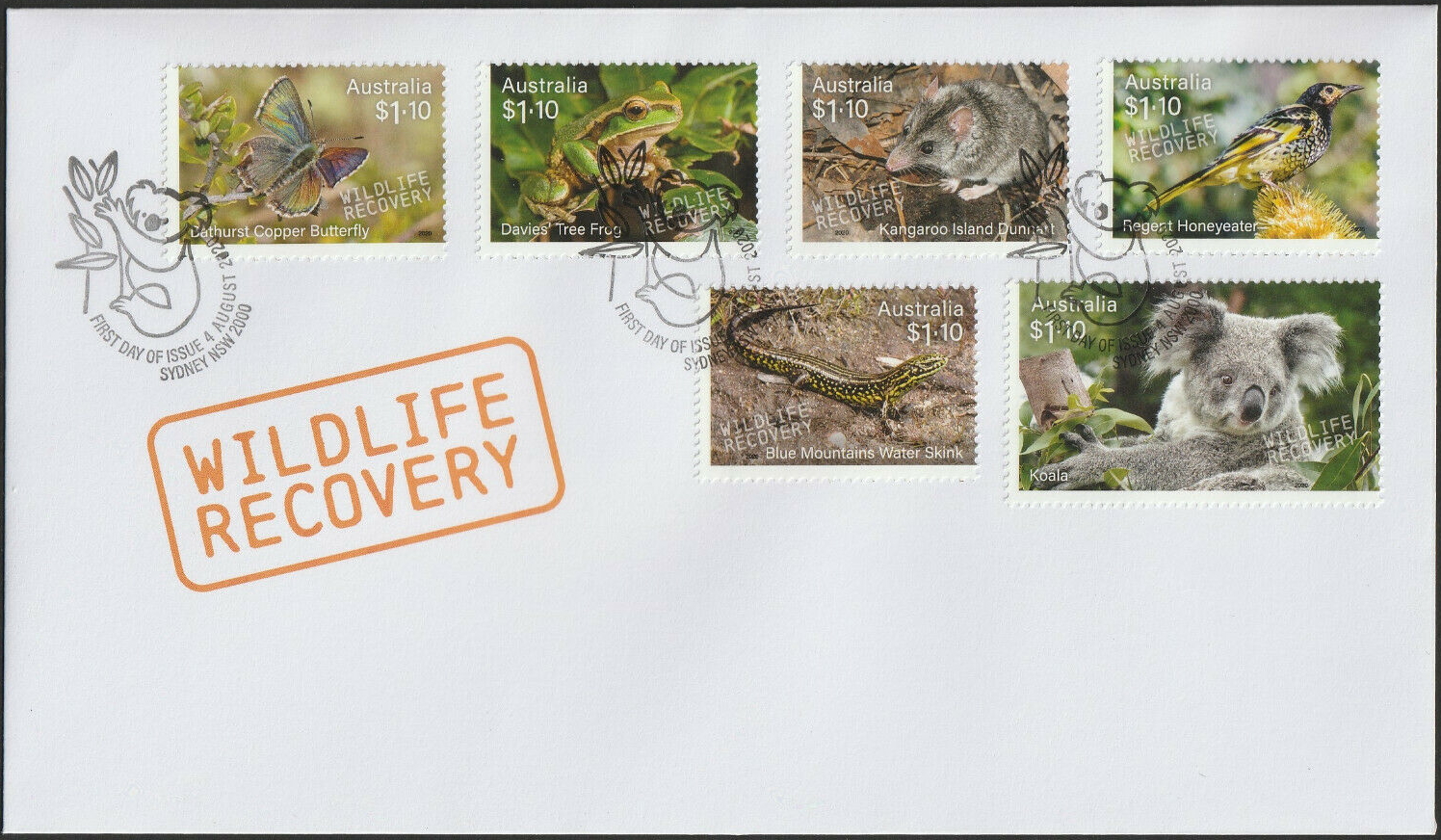 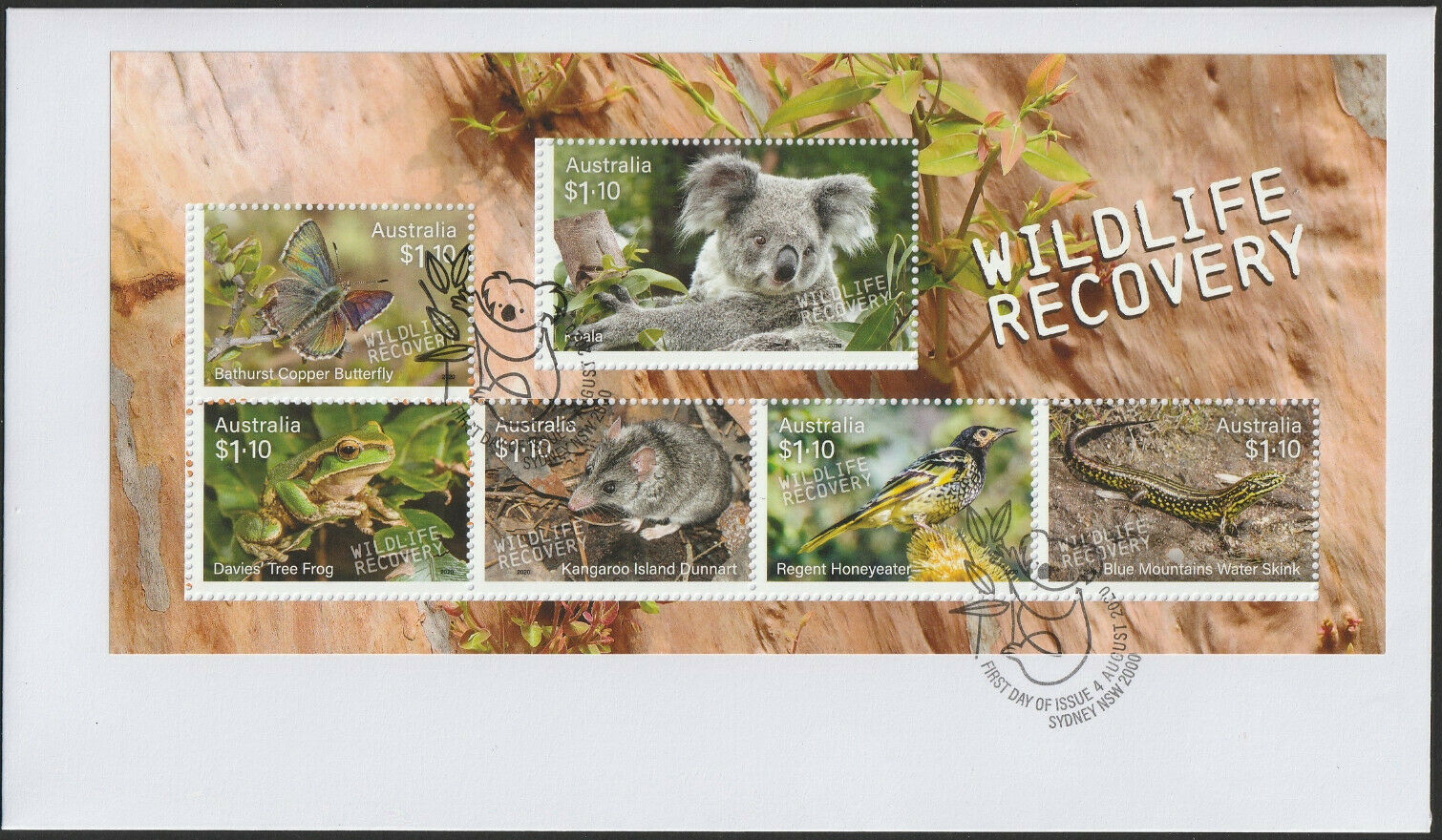 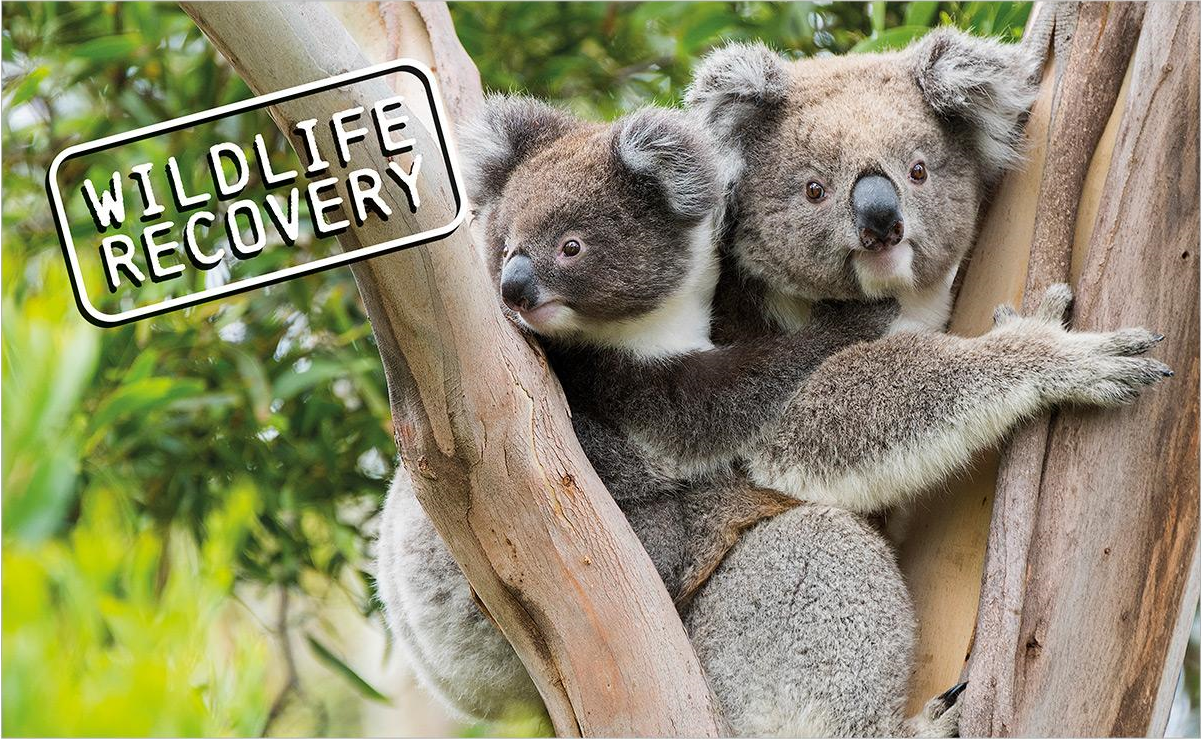 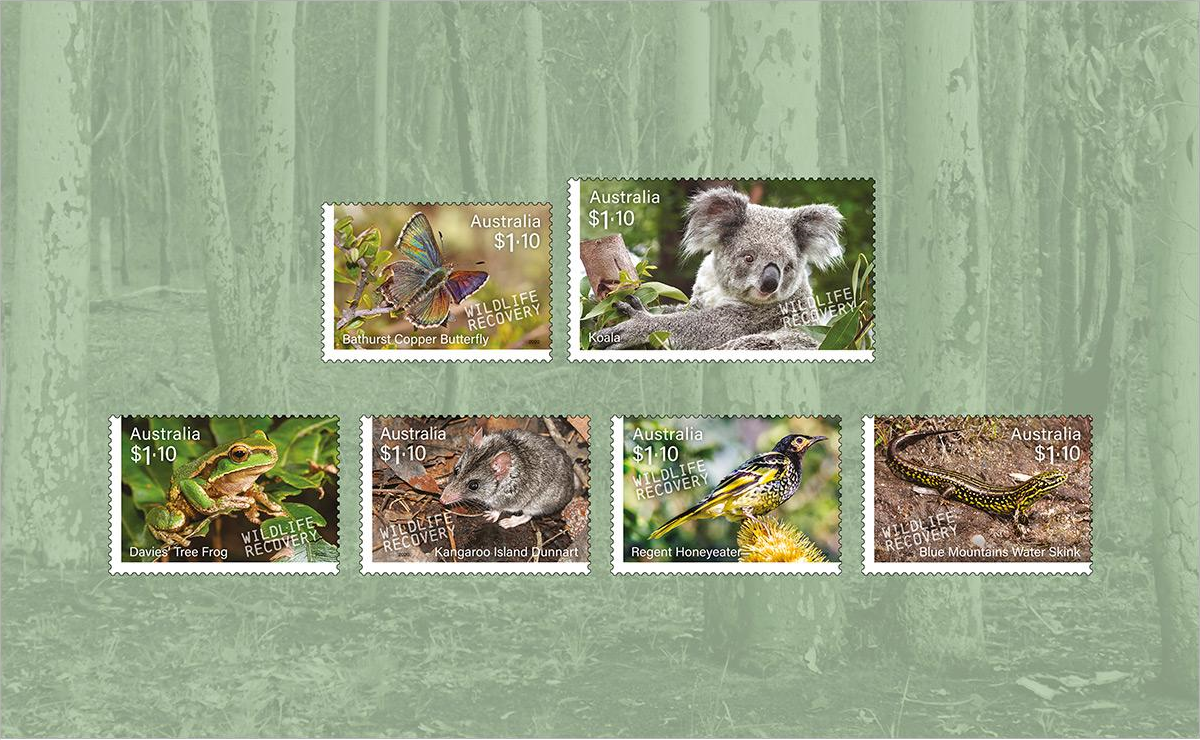 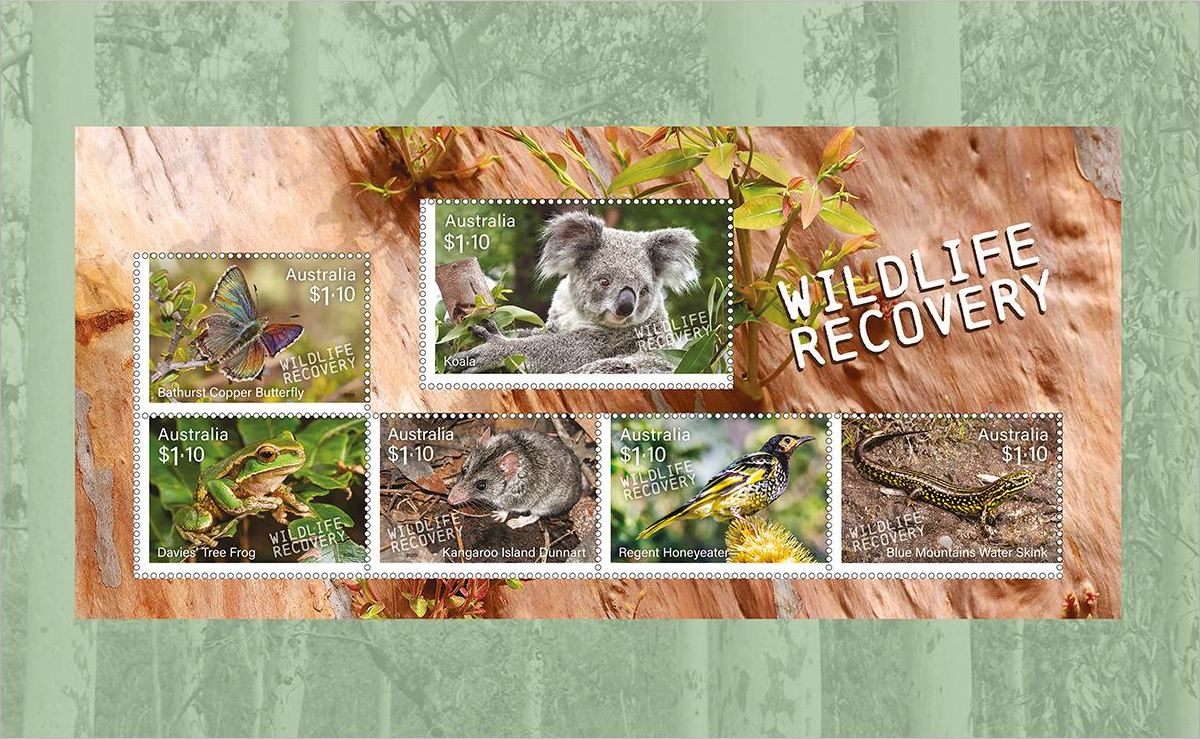 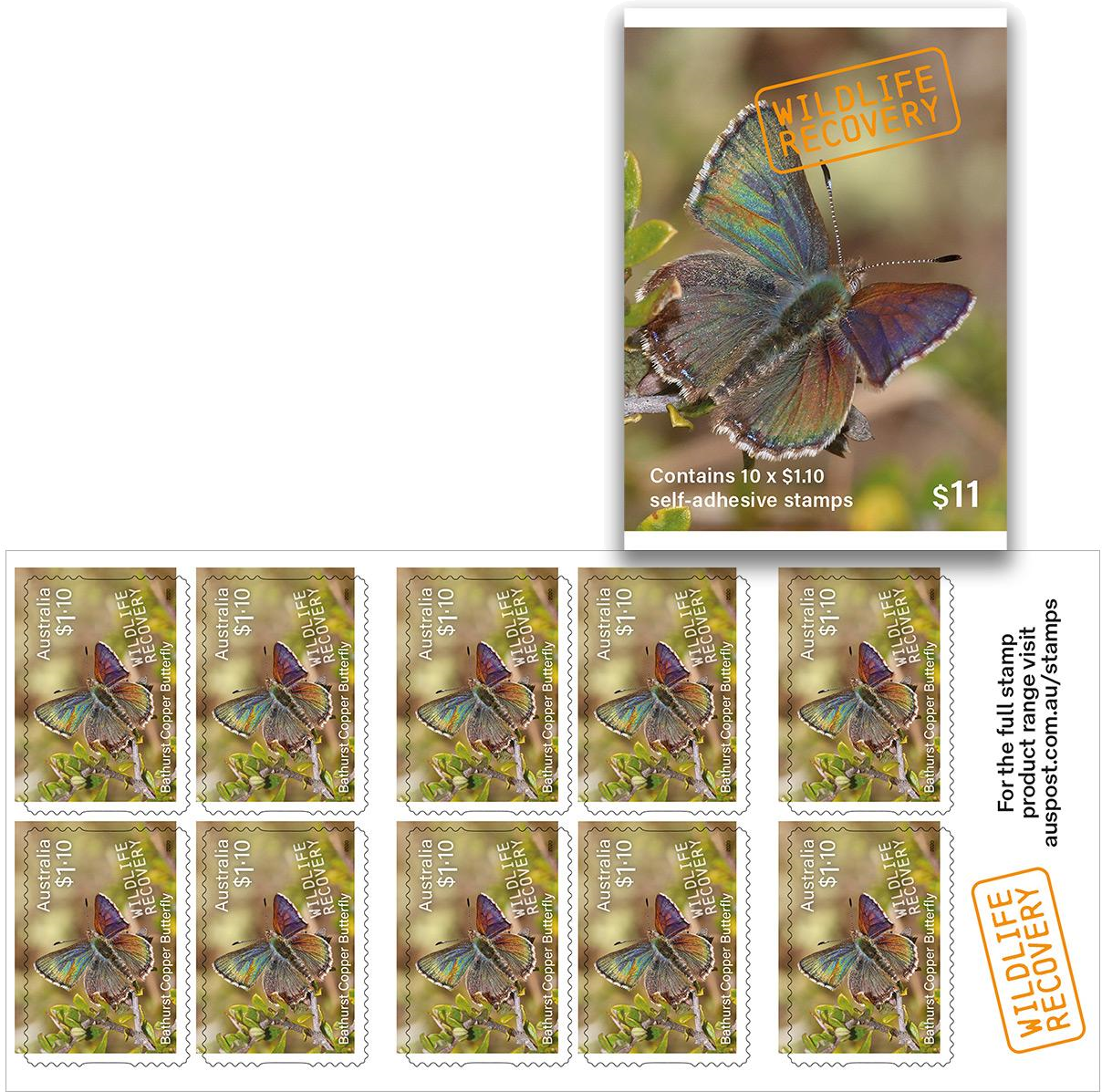 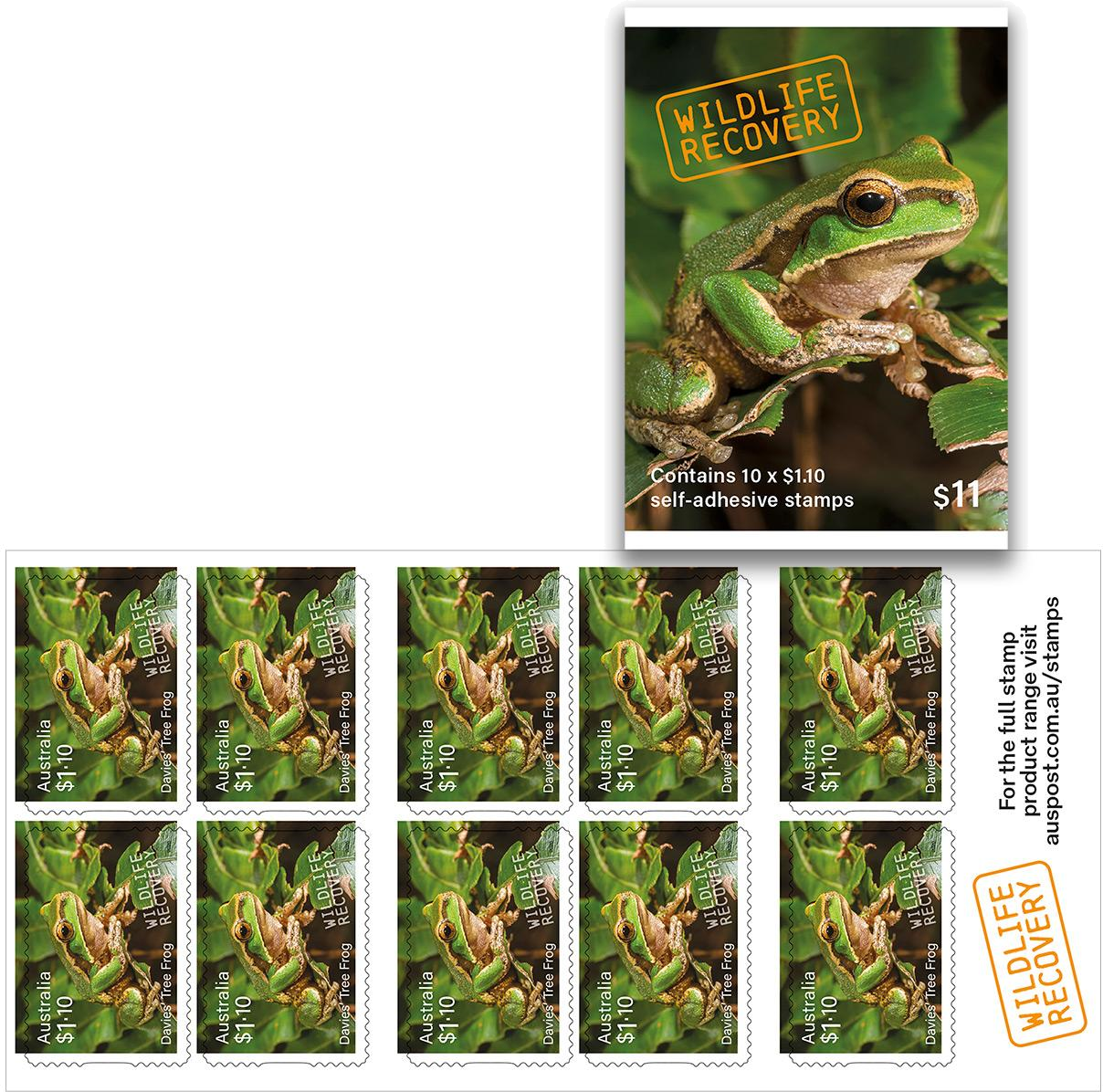 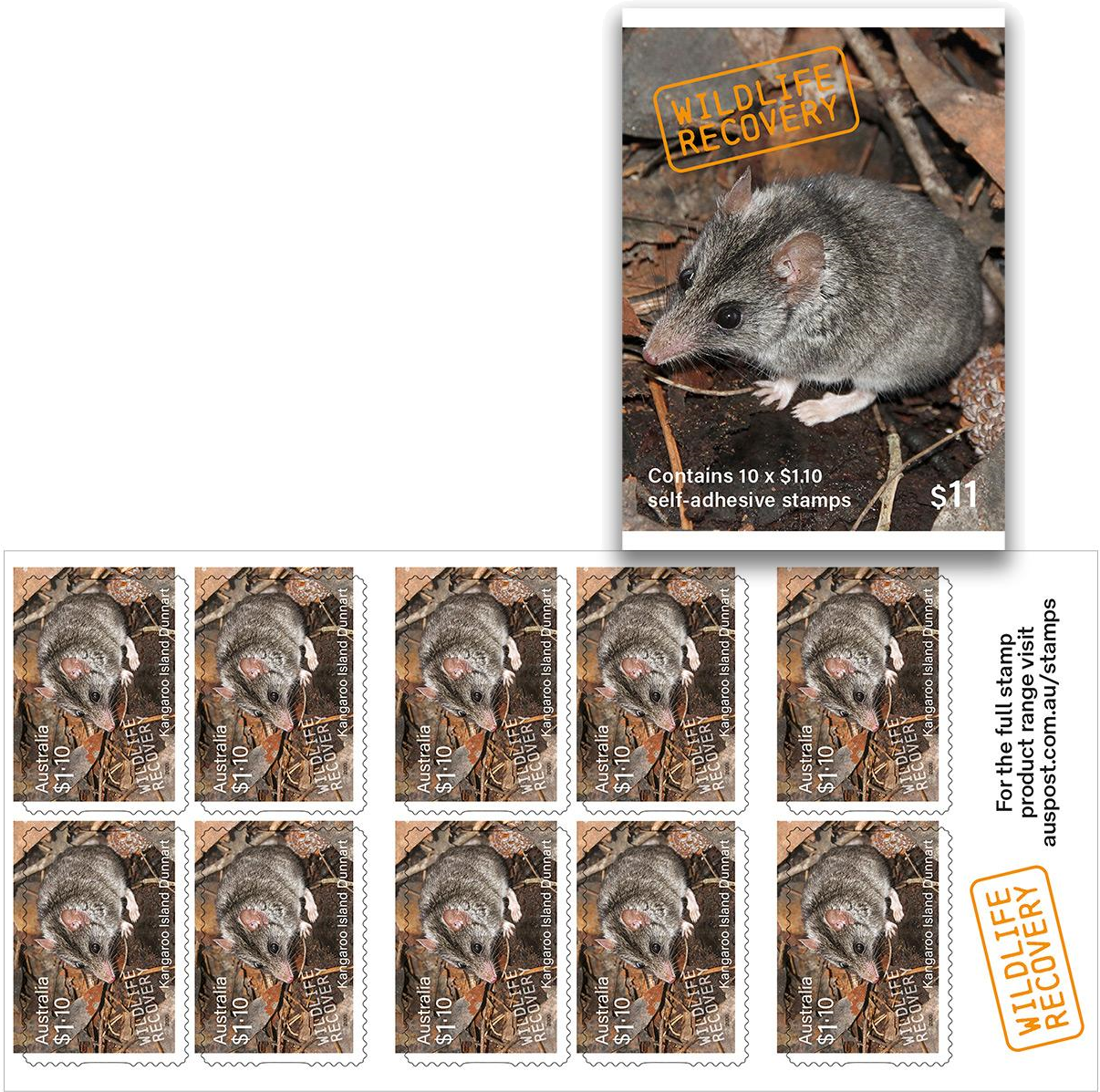 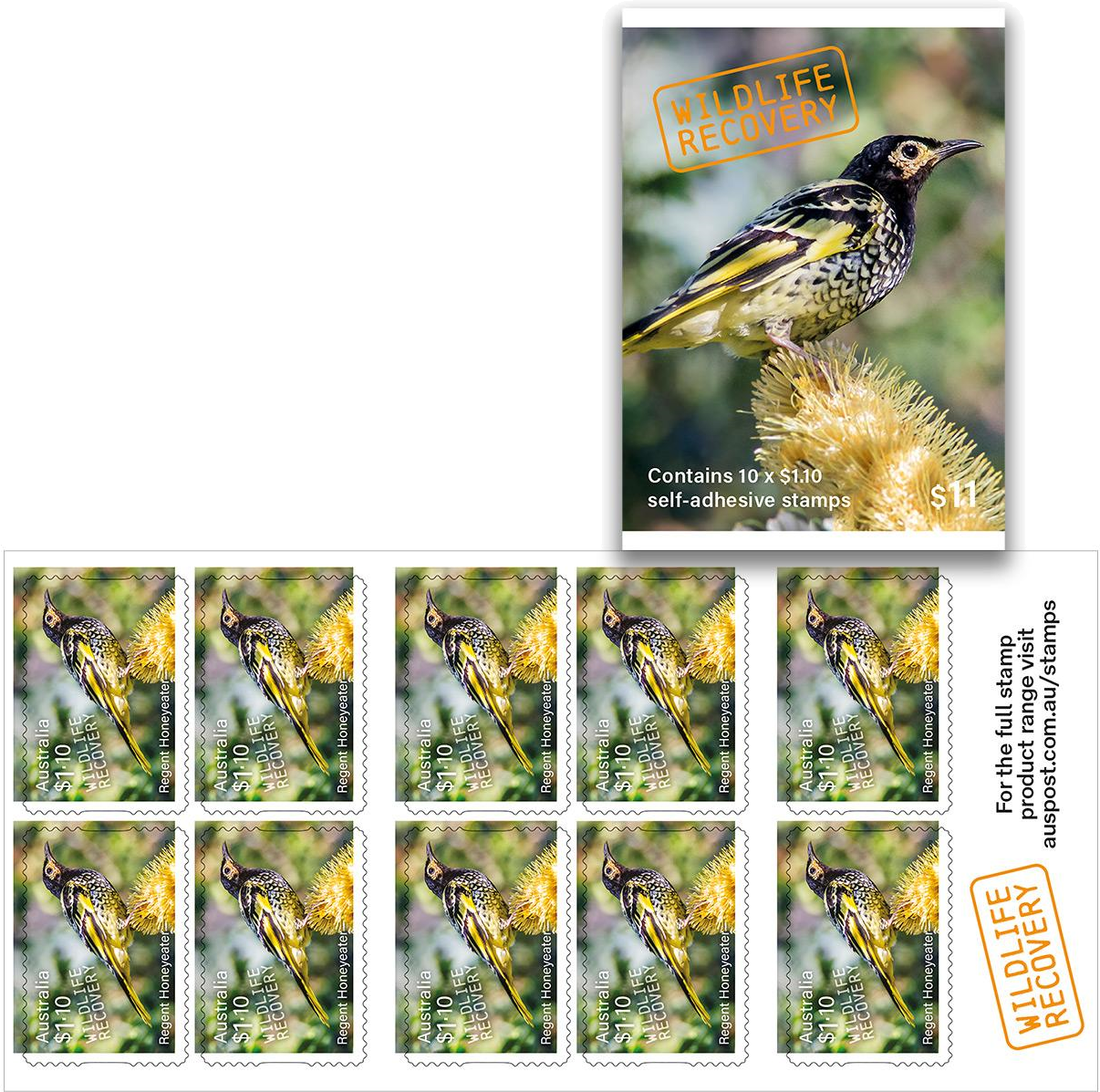 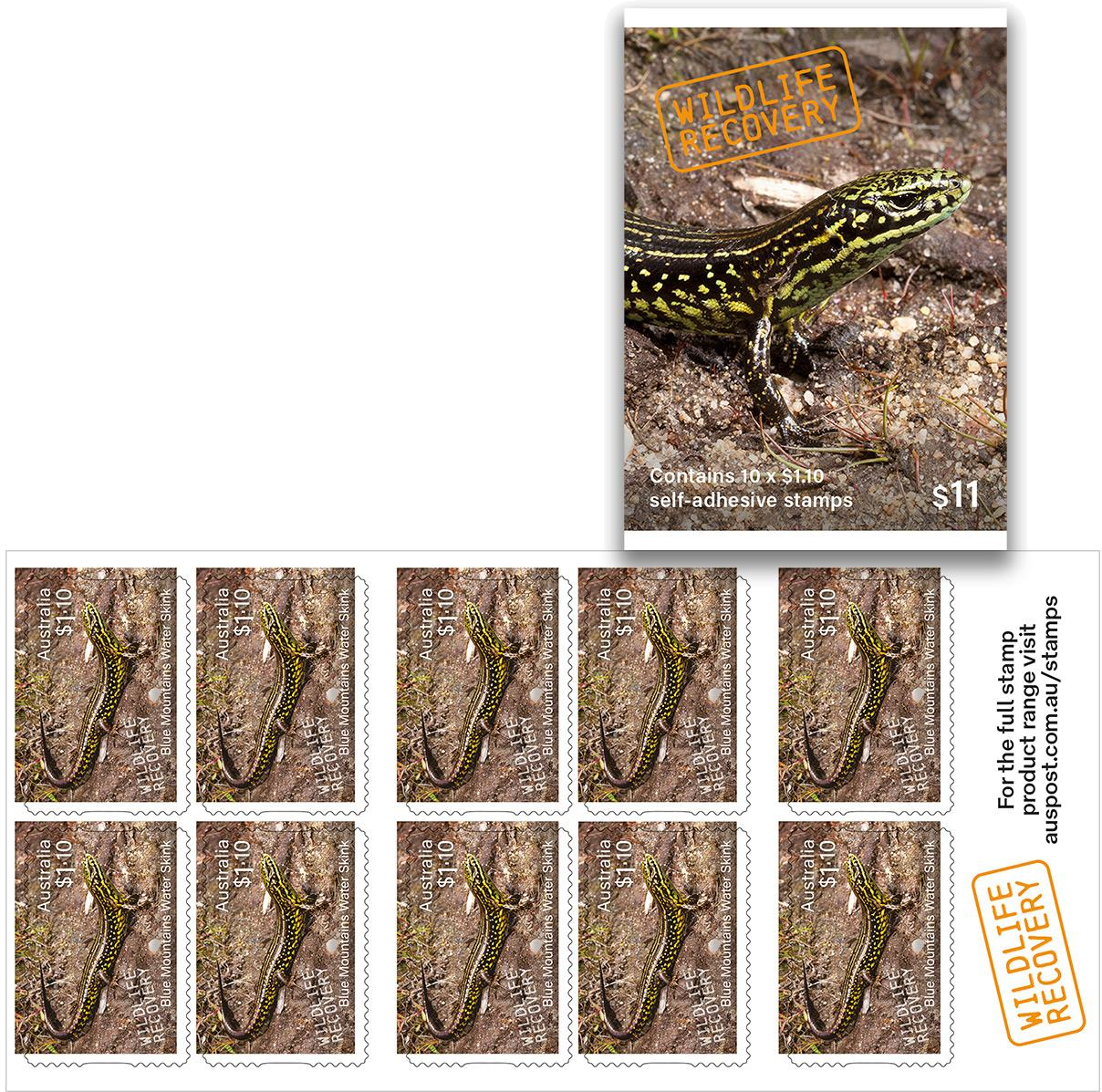 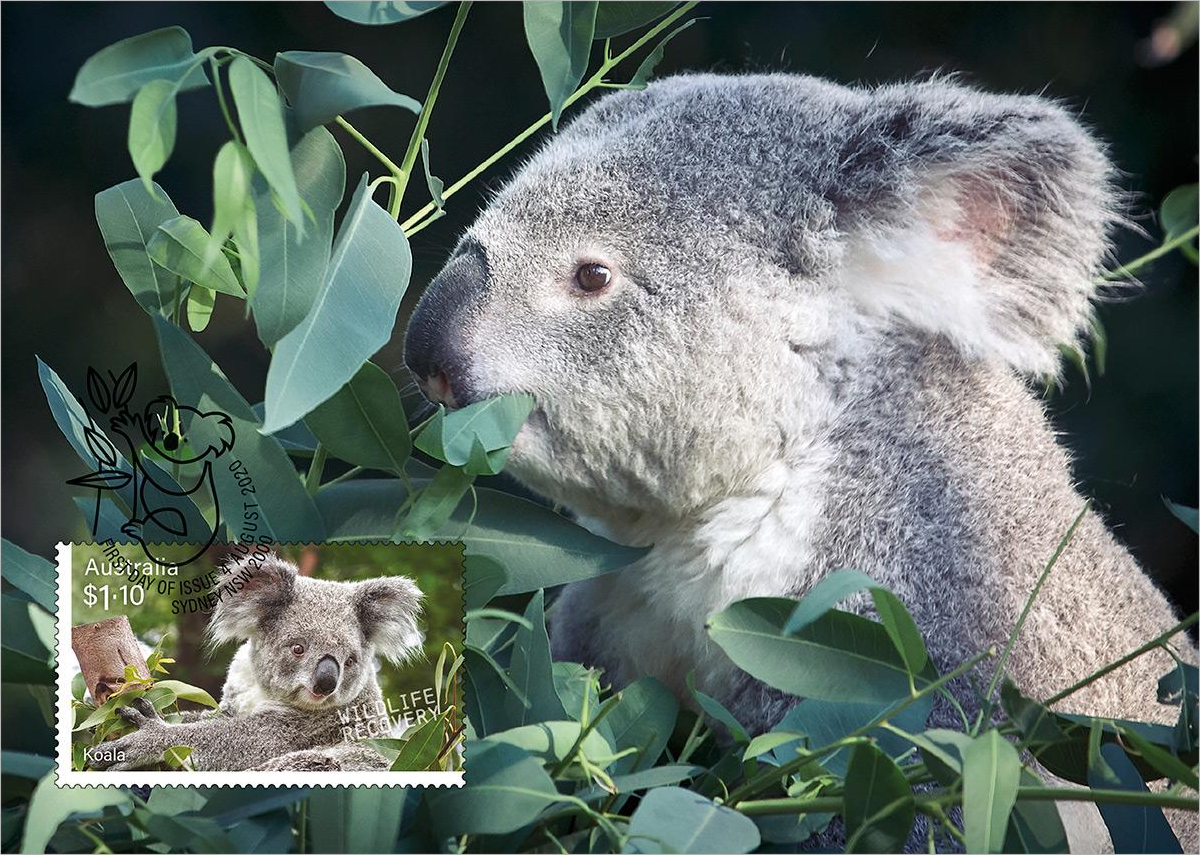 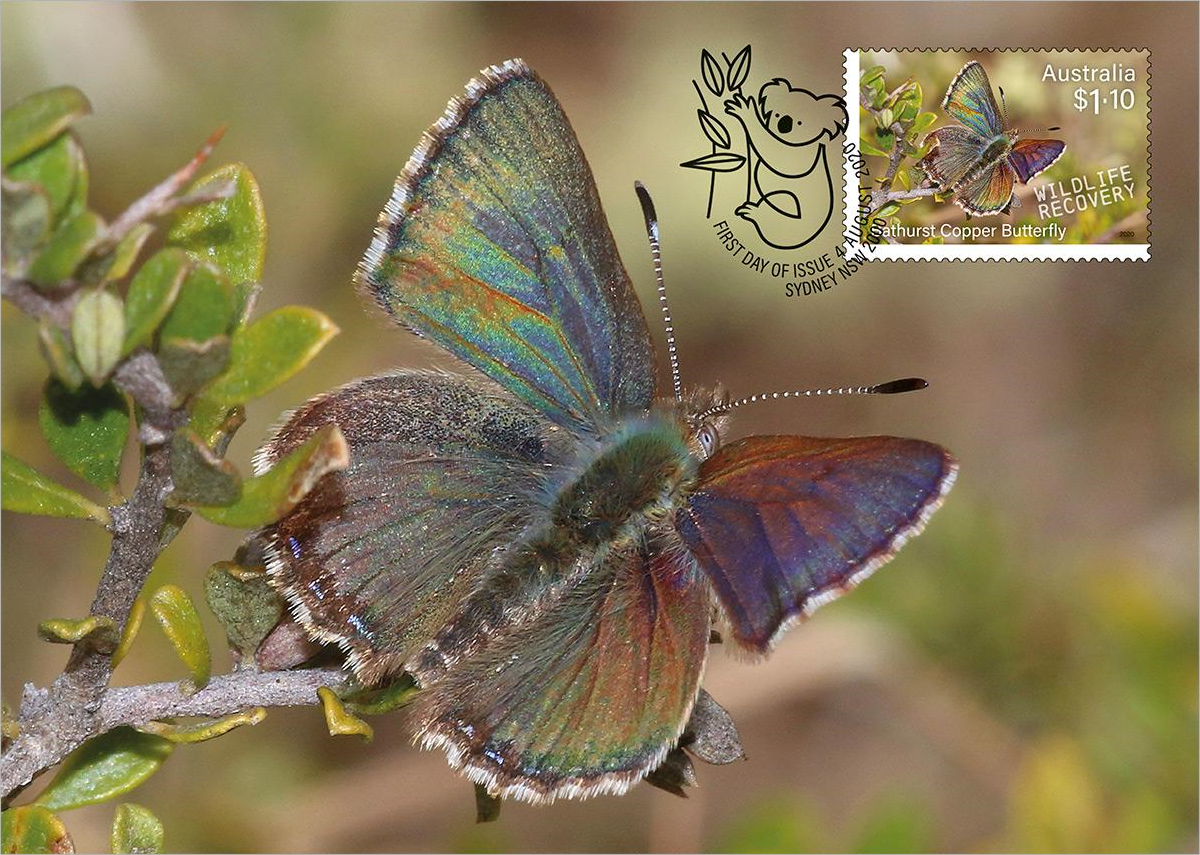 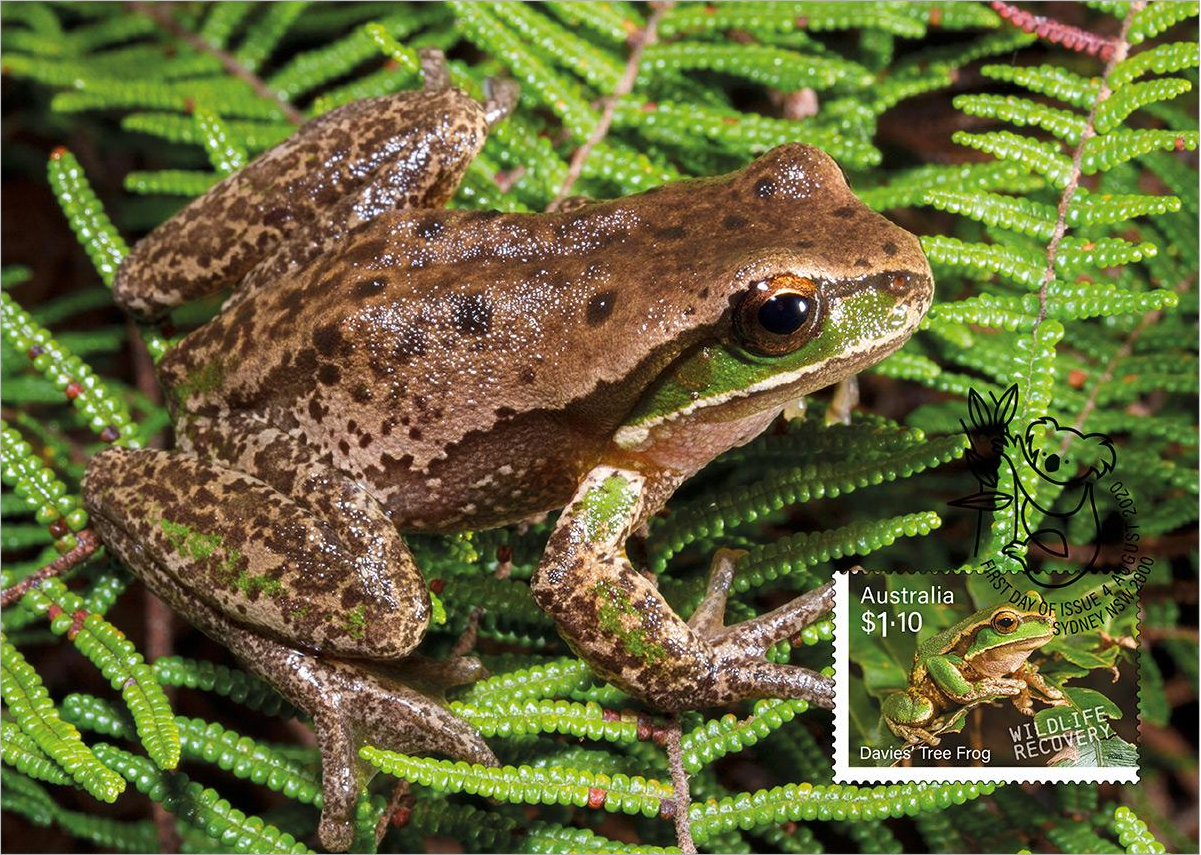 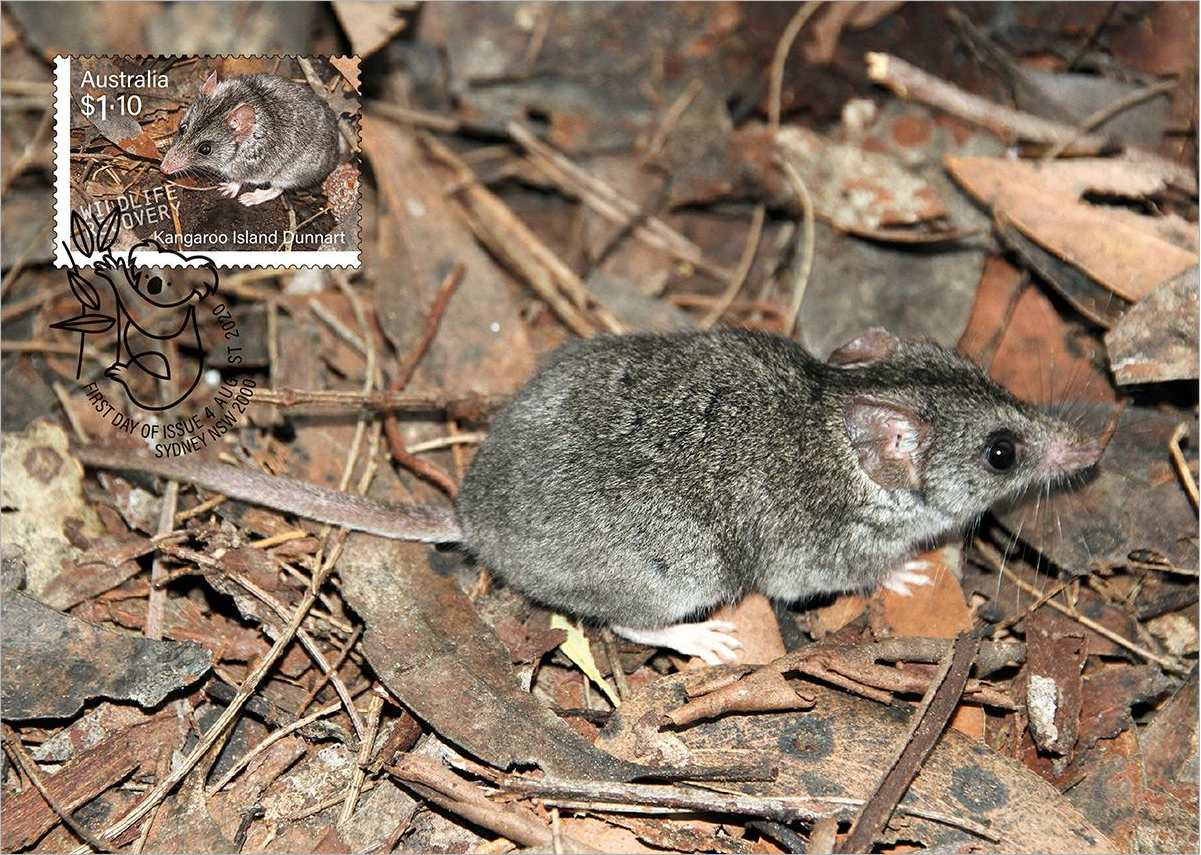 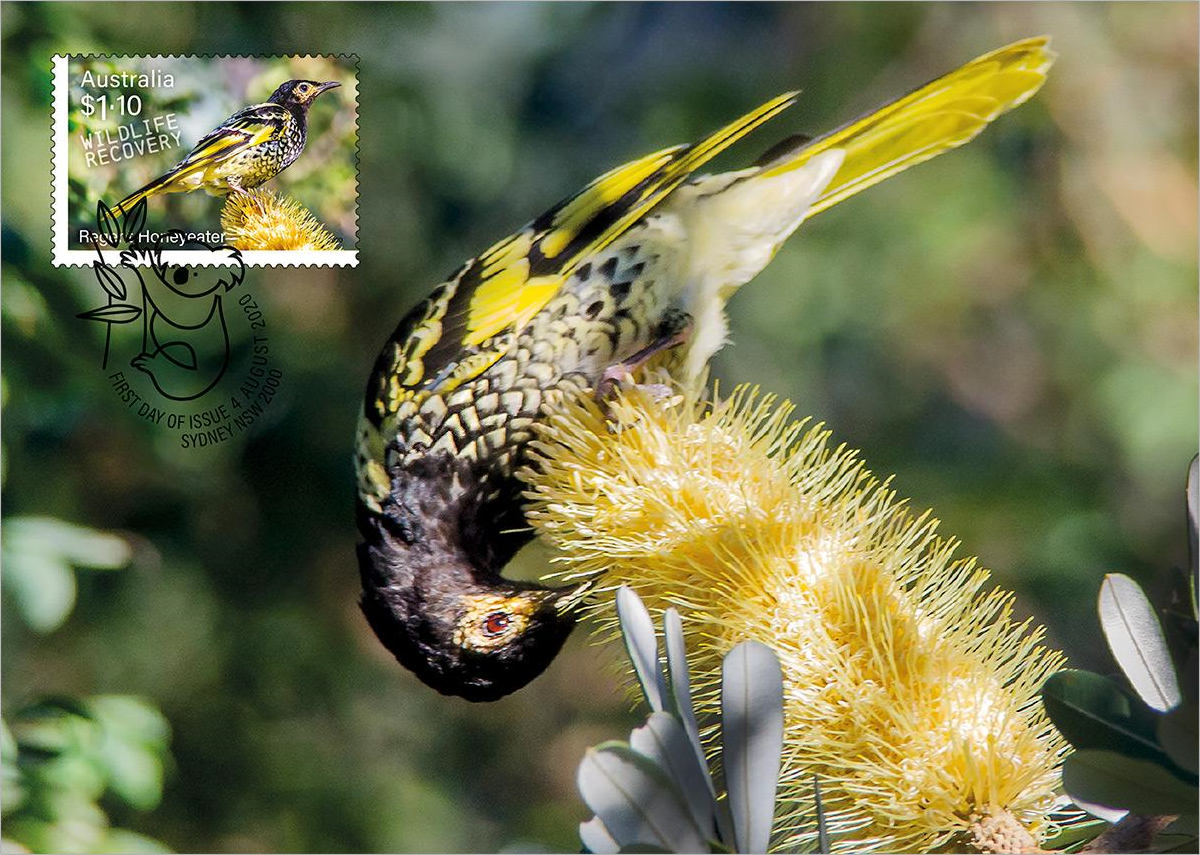 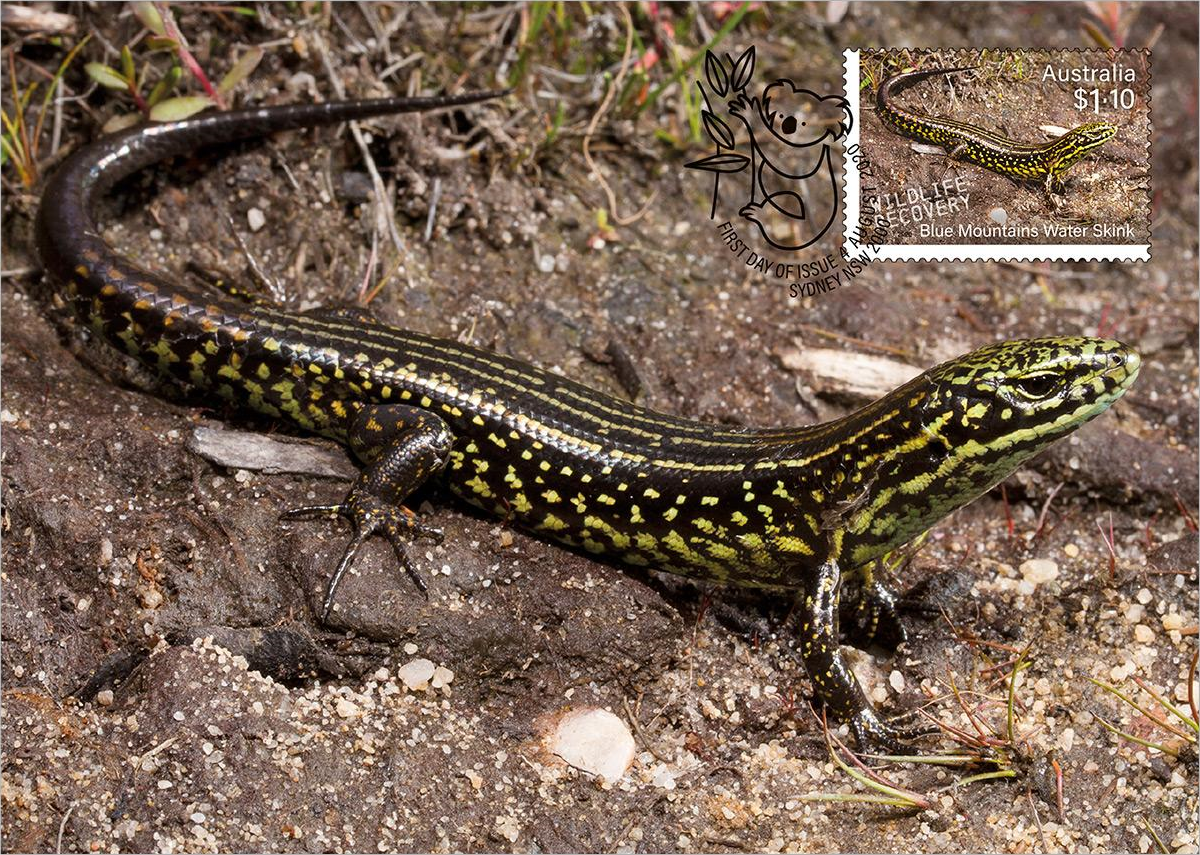 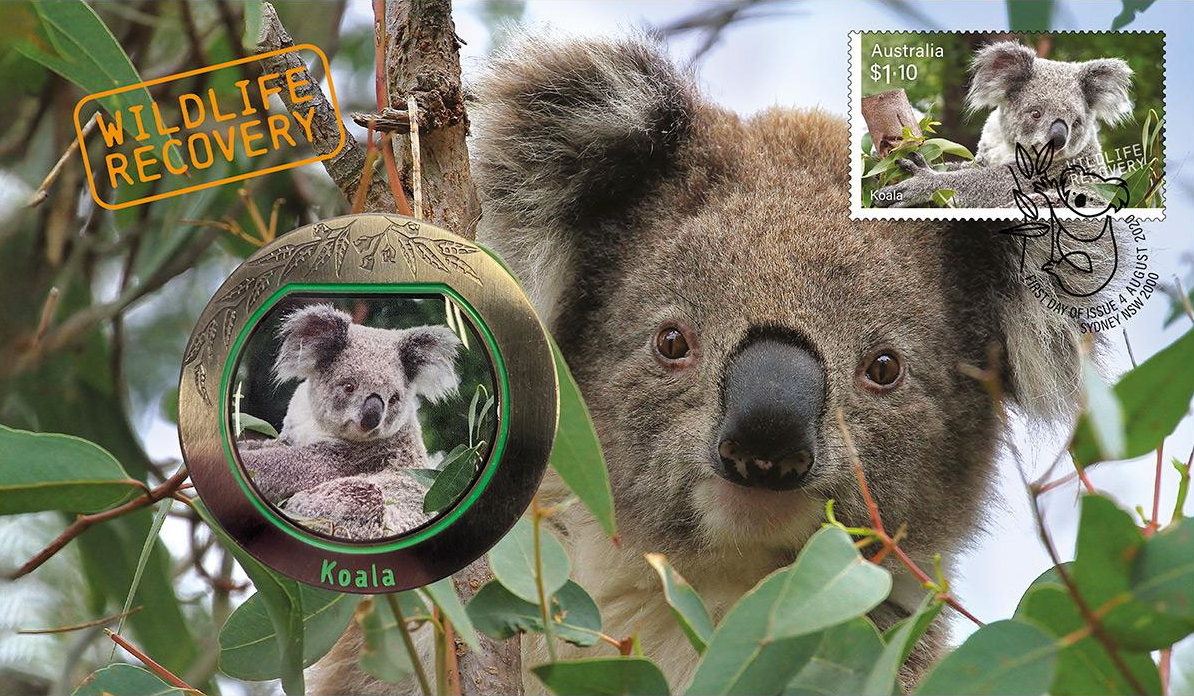 This stamp and medallion cover is very limited collectable, featuring a pictorial envelope with the Koala stamp from the Wildlife Recovery stamp issue and related medallion. The stamp is postmarked – First day of issue | 4 August 2020 | Sydney NSW 2000

Wildlife Recovery is the theme for Stamp Collecting Month 2020. Learn more about the incredible efforts being undertaken to ensure the survival of wildlife species affected by recent Australian bushfires, including our much-loved Koala, at our dedicated web site. 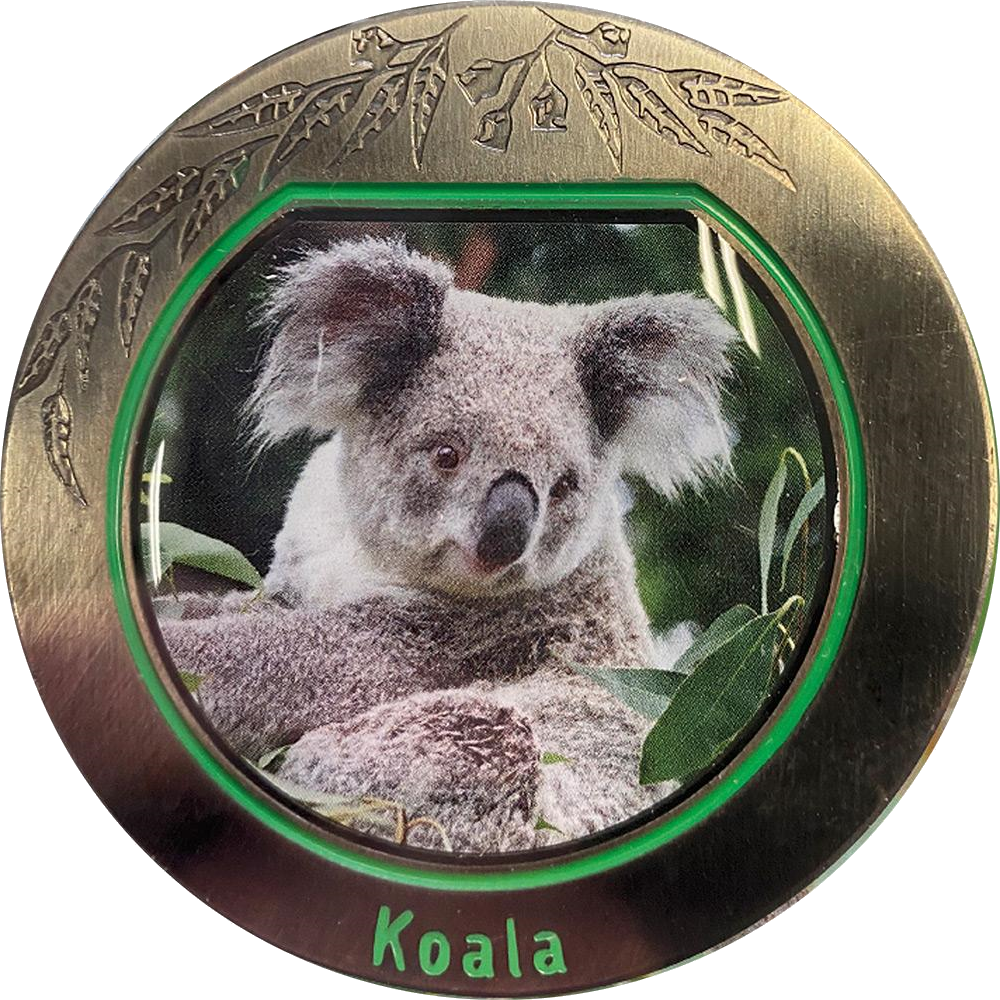 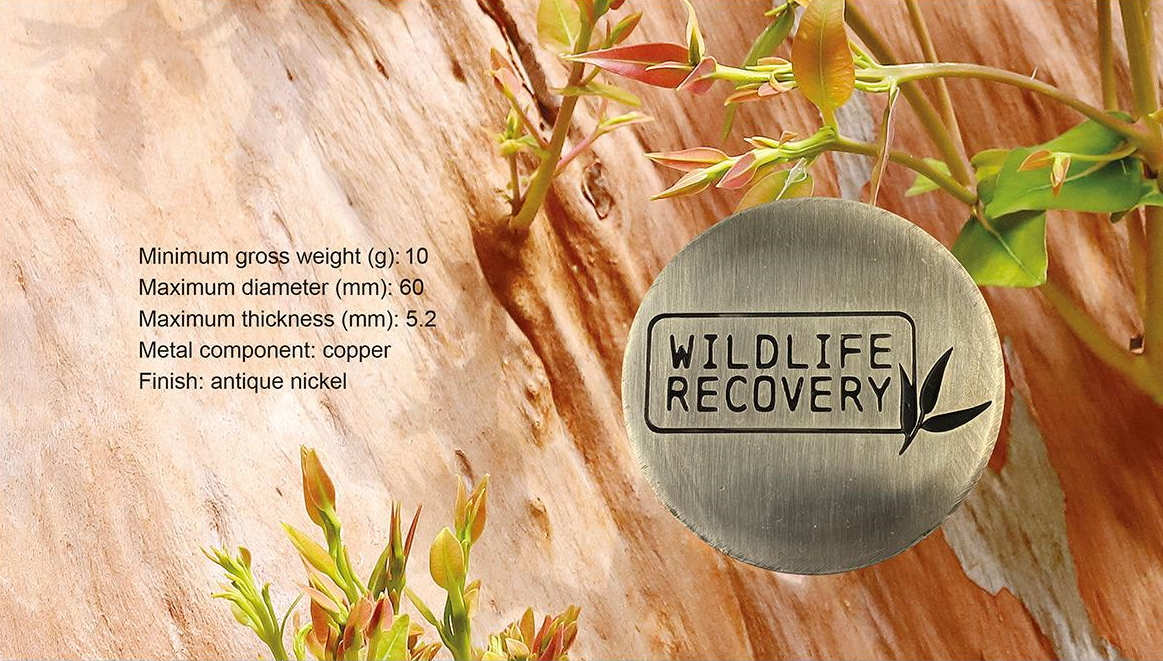 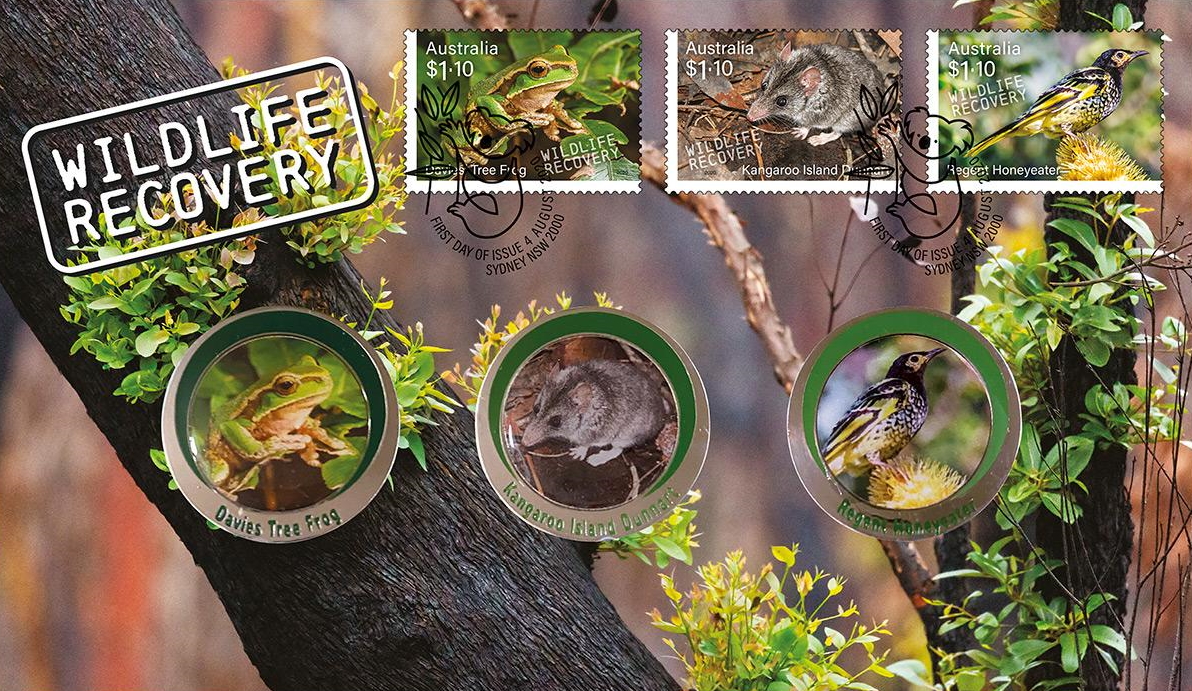 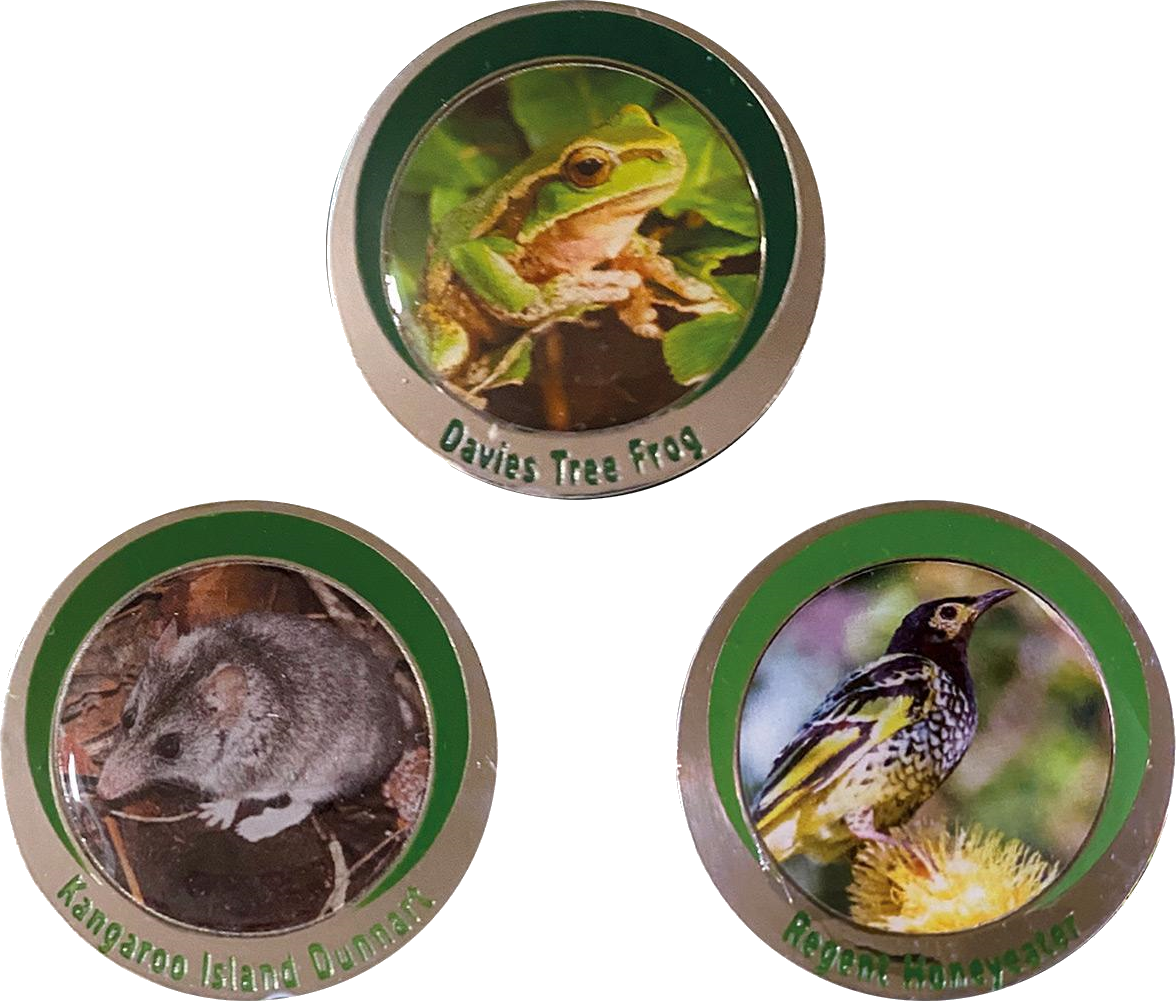 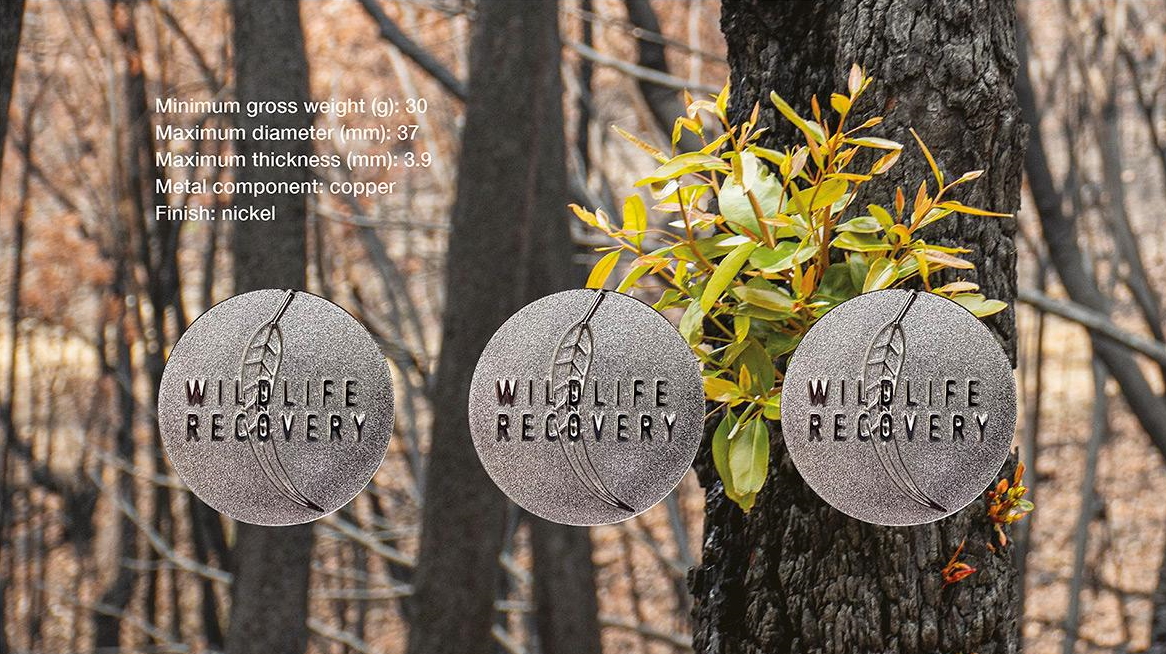