This stamp issue commemorates the centenary of the Princes Highway, Australia. The stamp designs feature vintage travel posters that celebrate some of the cities and towns along its length.

The Princes Highway was officially opened in 1920 as a major arterial road between Sydney and Melbourne via the New South Wales South Coast and Gippsland, in Victoria. In the early days, the scenic route was the preferred way to drive between Melbourne and Sydney. The highway was established from pre-existing roads. It was named in honour of the Prince of Wales (later King Edward VIII and, after his abdication, the Duke of Windsor) on the occasion of his royal tour of Australia, which took place from April to August 1920. The tour was initiated by King George V by way of official thanks for Australia’s role in supporting Great Britain during the World War I (1914–18). While the prince never actually travelled on the highway, he gave permission for it to be named after him.

The first section from Melbourne was formally opened on 10 August 1920 at Warragul, Victoria, and the New South Wales opening took place on 19 October in Bulli on the South Coast of New South Wales. In 1922, approval was given to extend the Princes Highway to Adelaide via Geelong, Warrnambool, Portland, Robe and Mount Gambier. It was later extended to Port Augusta, terminating at the Eyre Highway. It is now known as the Princes Highway (A1 and B1) and Princes Freeway or Motorway (M1). In 2011 the section of the road between Port Wakefield and Port Augusta was renamed the Augusta Highway. 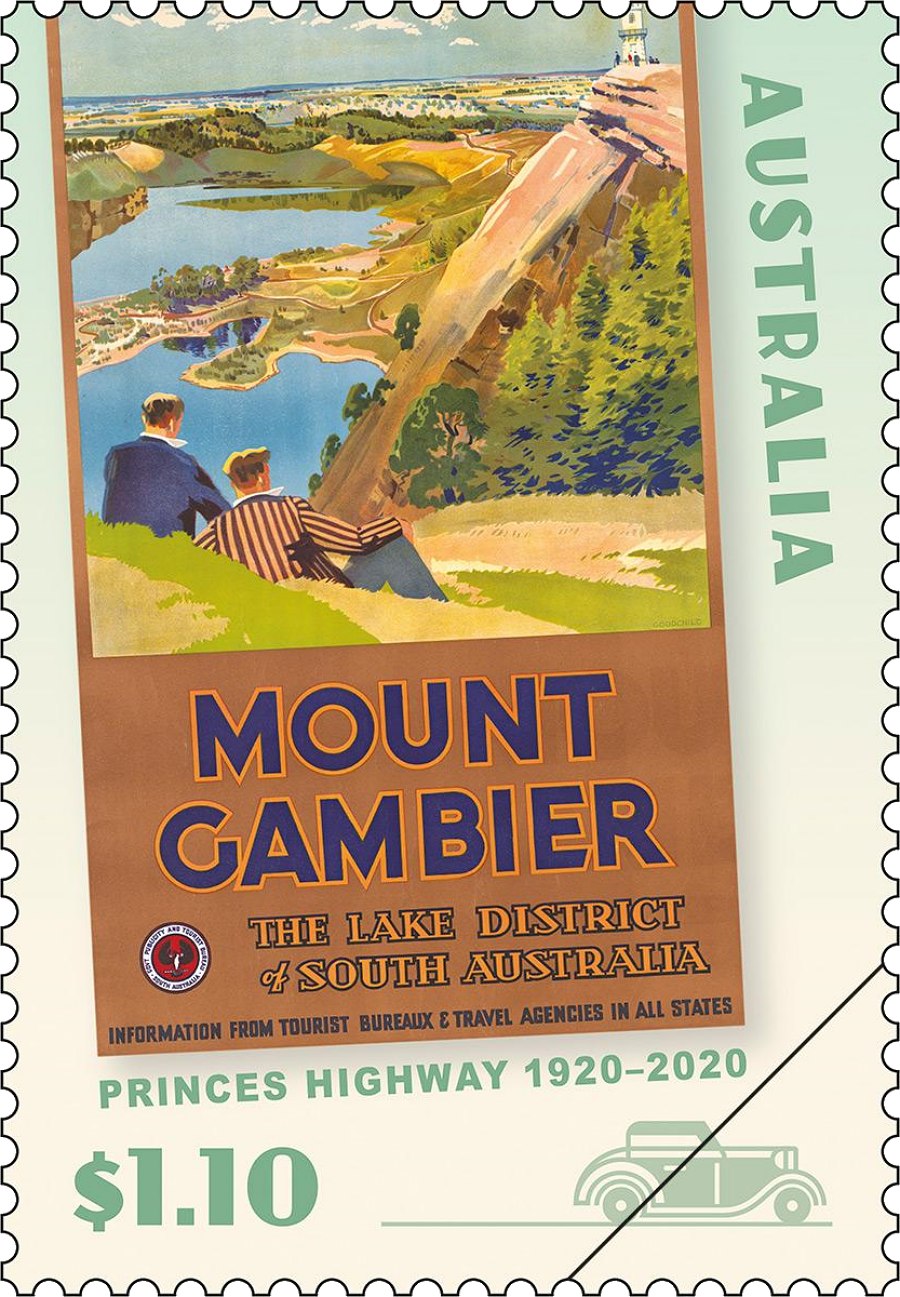 Artist John Charles Goodchild (1898—1980) arrived with his family in South Australia in 1913, from London. The travel poster featured on the stamp showcases the lakes of Mount Gambier as well as the Centenary Tower. 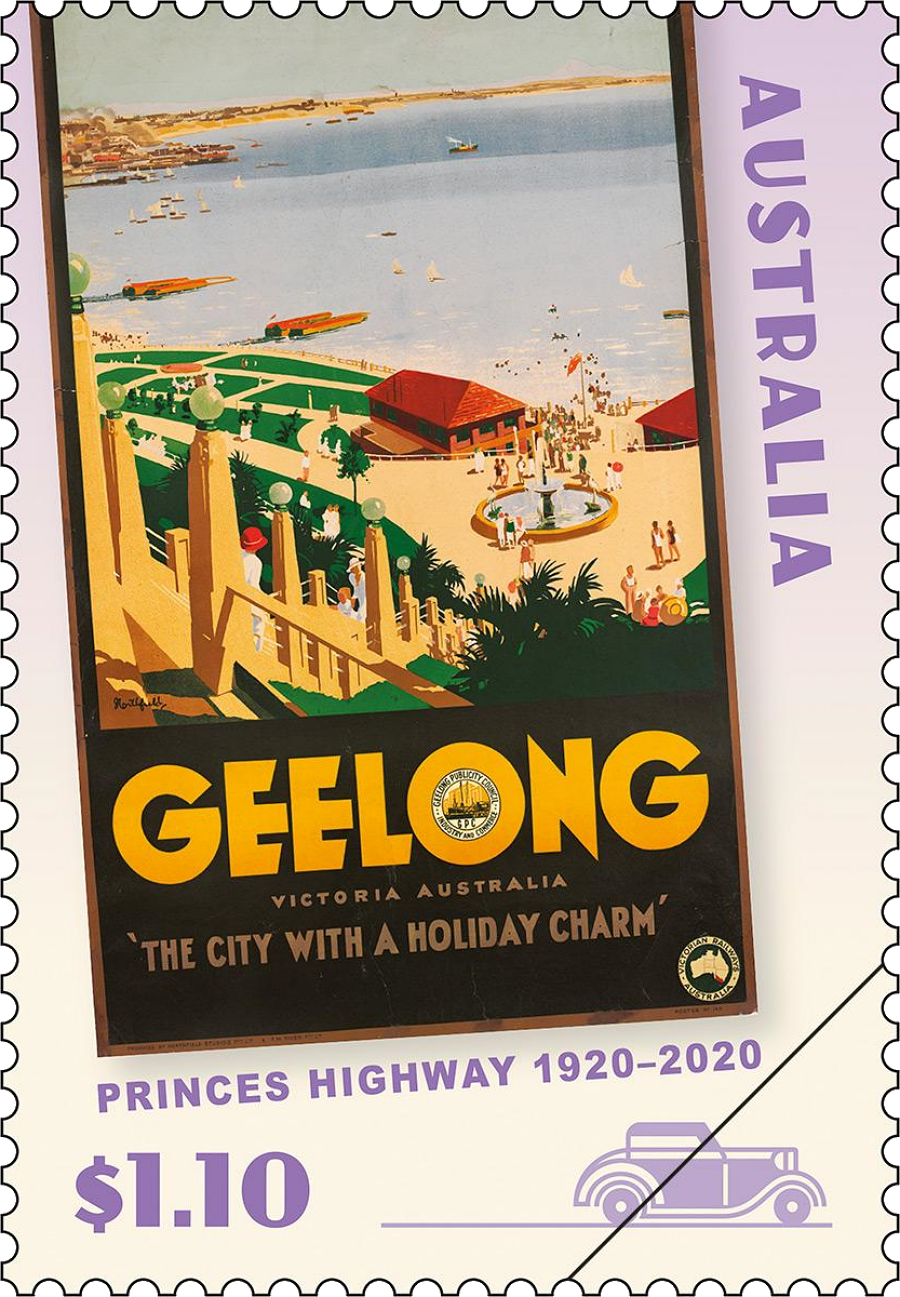 Isaac James Northfield (1887–1973) was one of the most celebrated Australian travel posters designers of the early 20th century. The travel poster featured on the stamp presents a day out at Geelong’s Eastern Beach. 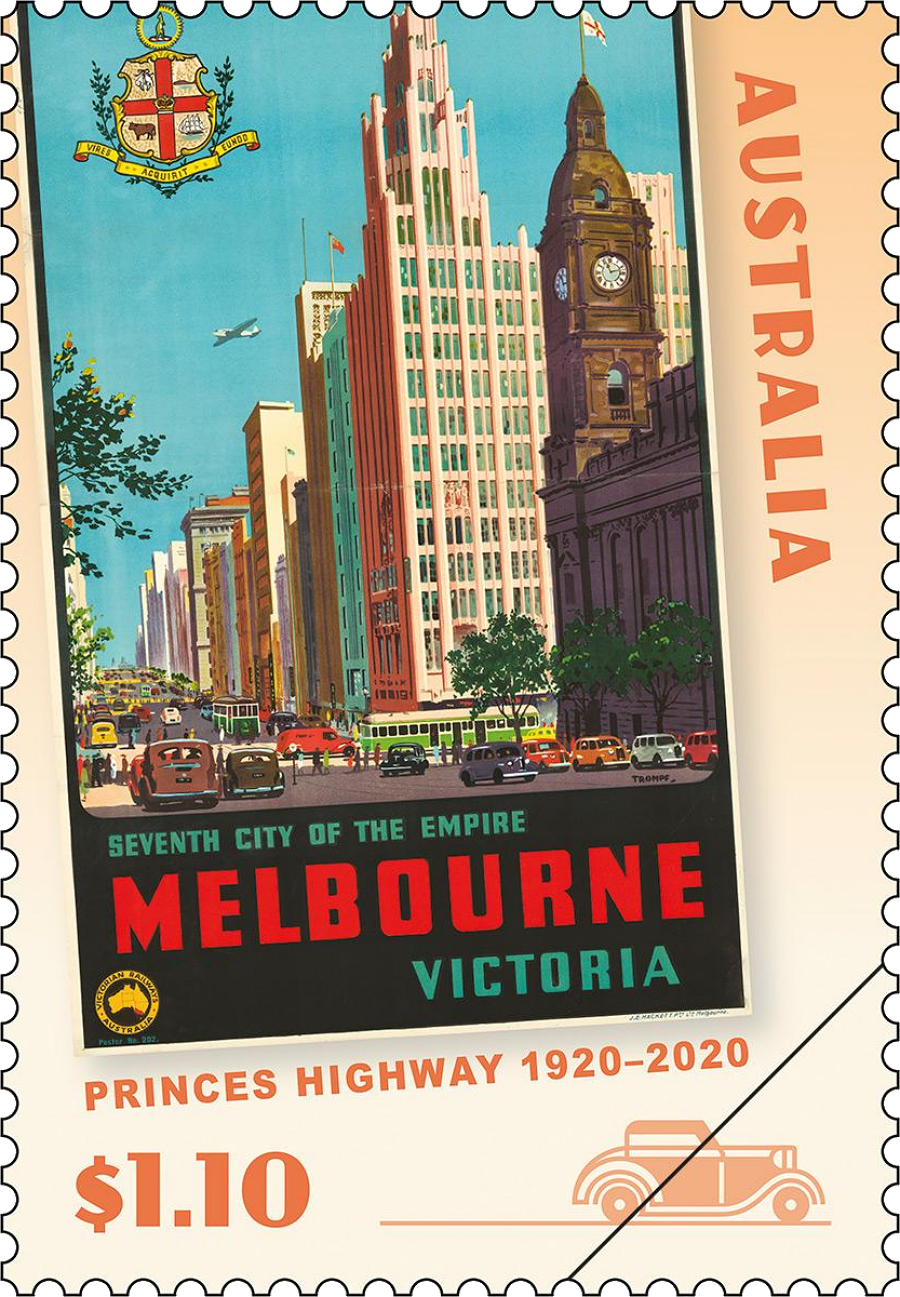 Like Northfield, commercial artist Percy Trompf (1902–1964) is renowned for his early 20th century travel posters. Trompf’s poster of Melbourne on the stamp showcases a busy day on Collins Street, Melbourne, at the intersection of Swanston Street. 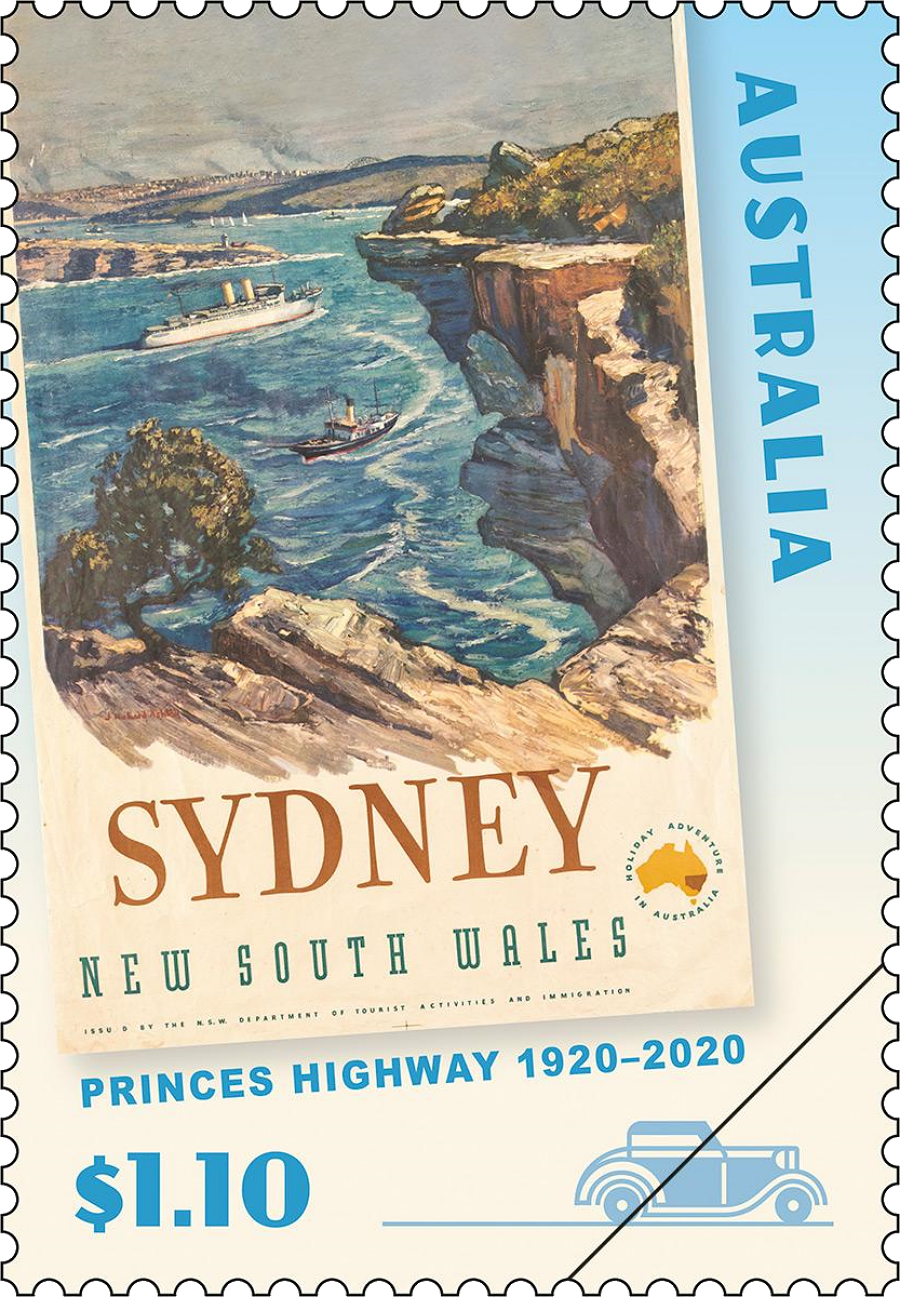 Artist Richard Ashton (1913–2001) worked mainly as a landscape and seascape artist, before working for two decades as art and publicity officer of the New South Wales Department of Tourism and Immigration. His poster of Sydney presented on the stamp features Sydney Harbour, with the tip of the Sydney Harbour Bridge visible in the distance.

Gutter Strips from Sheets of 50 Stamps: 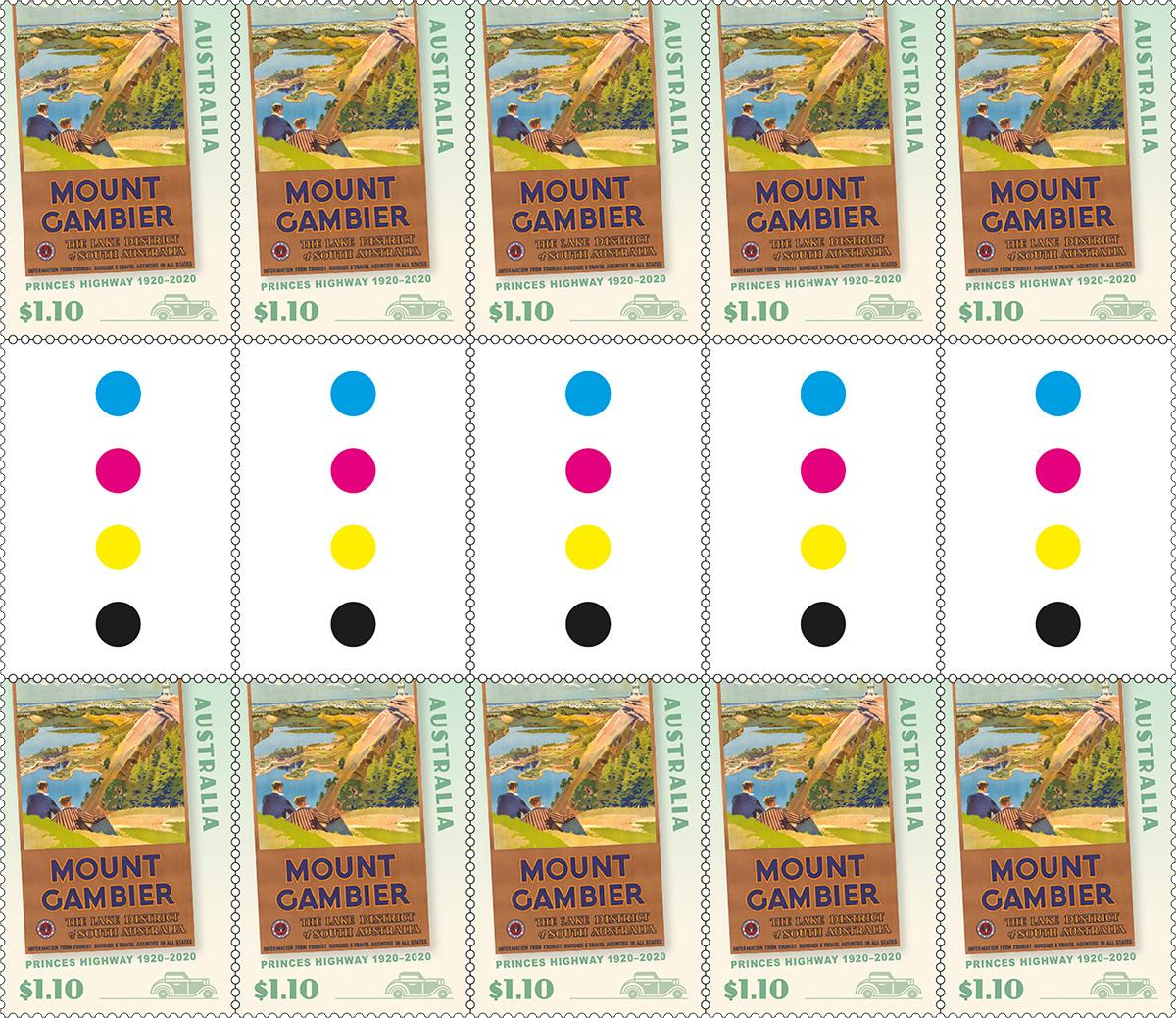 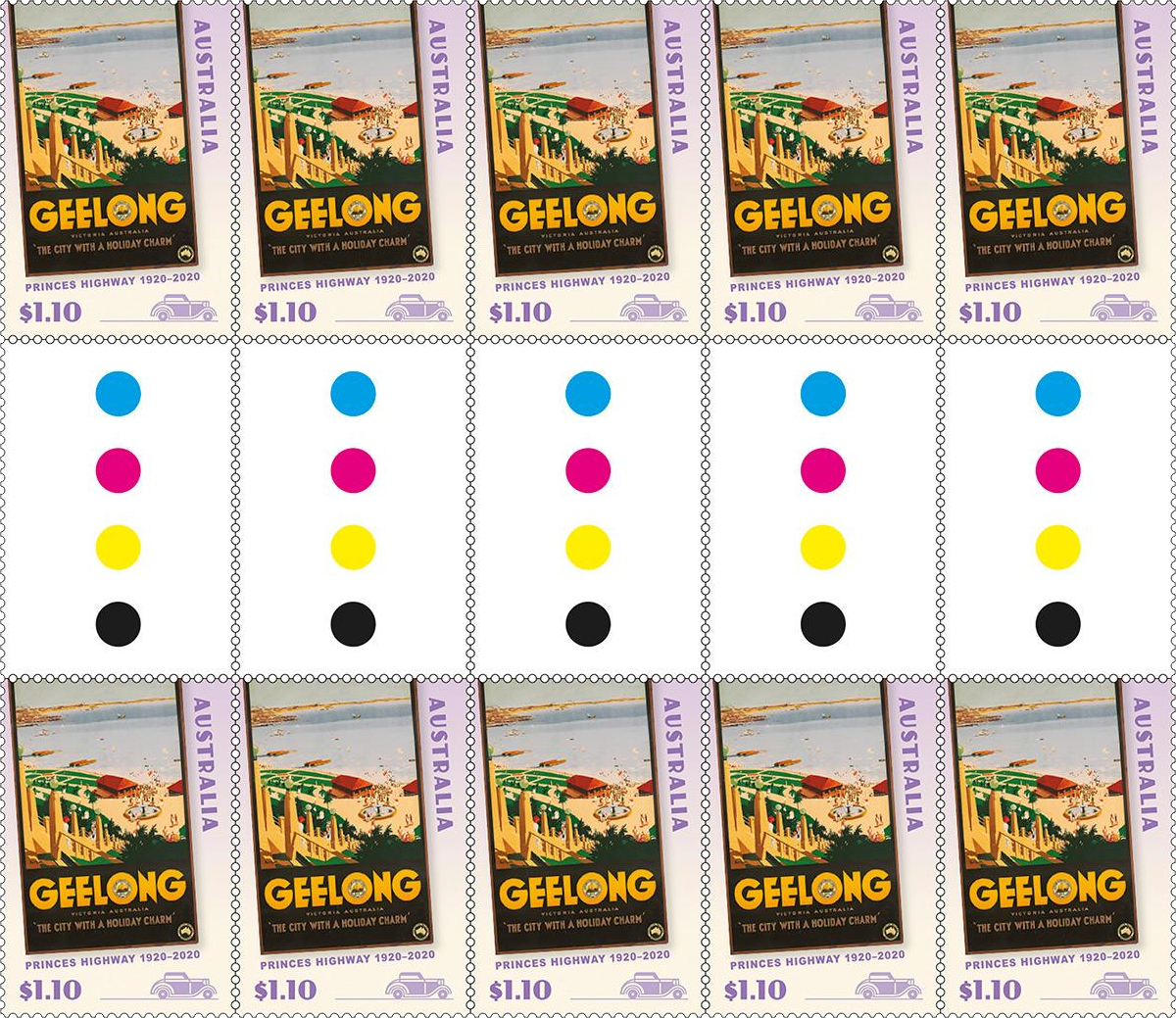 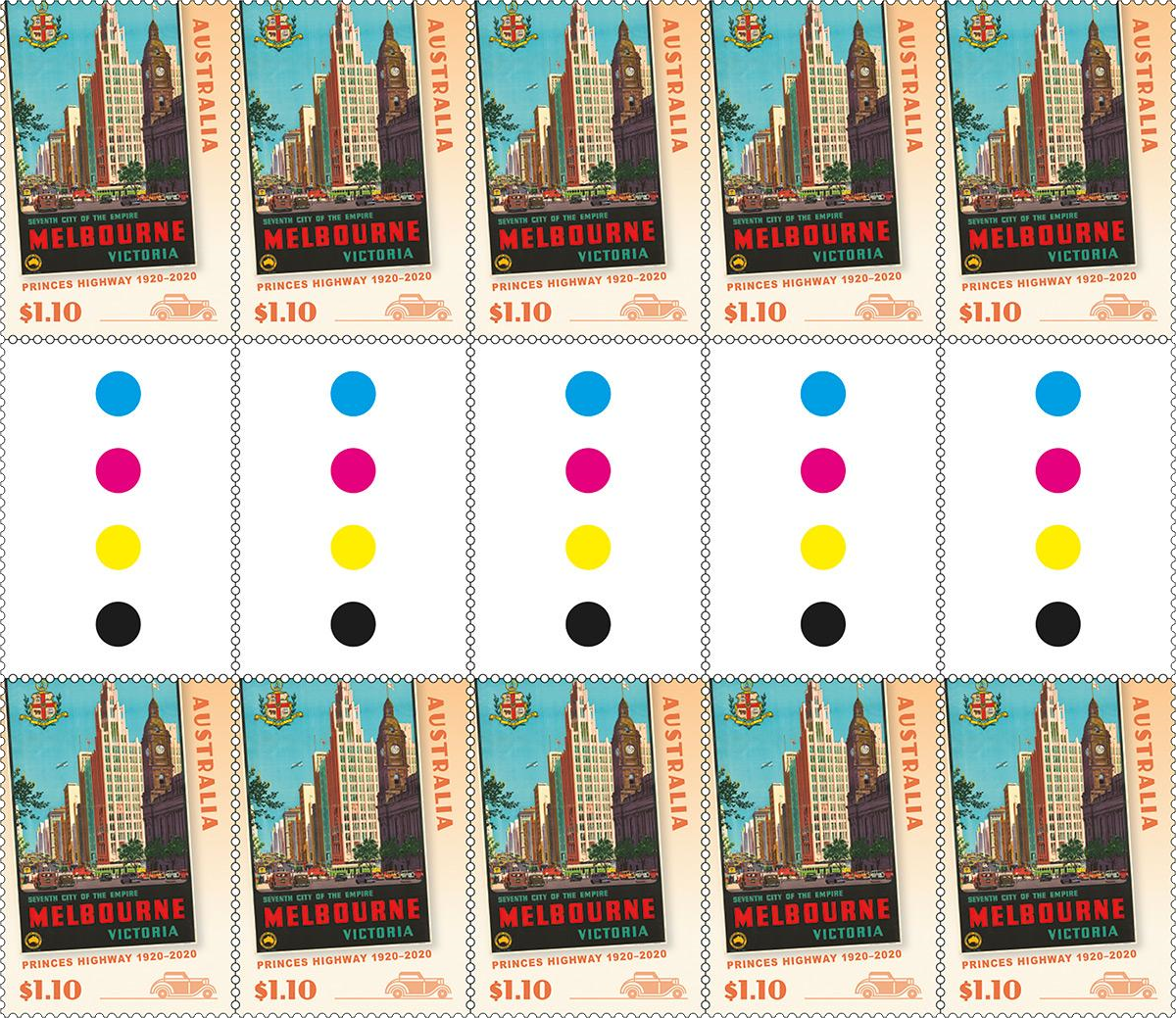 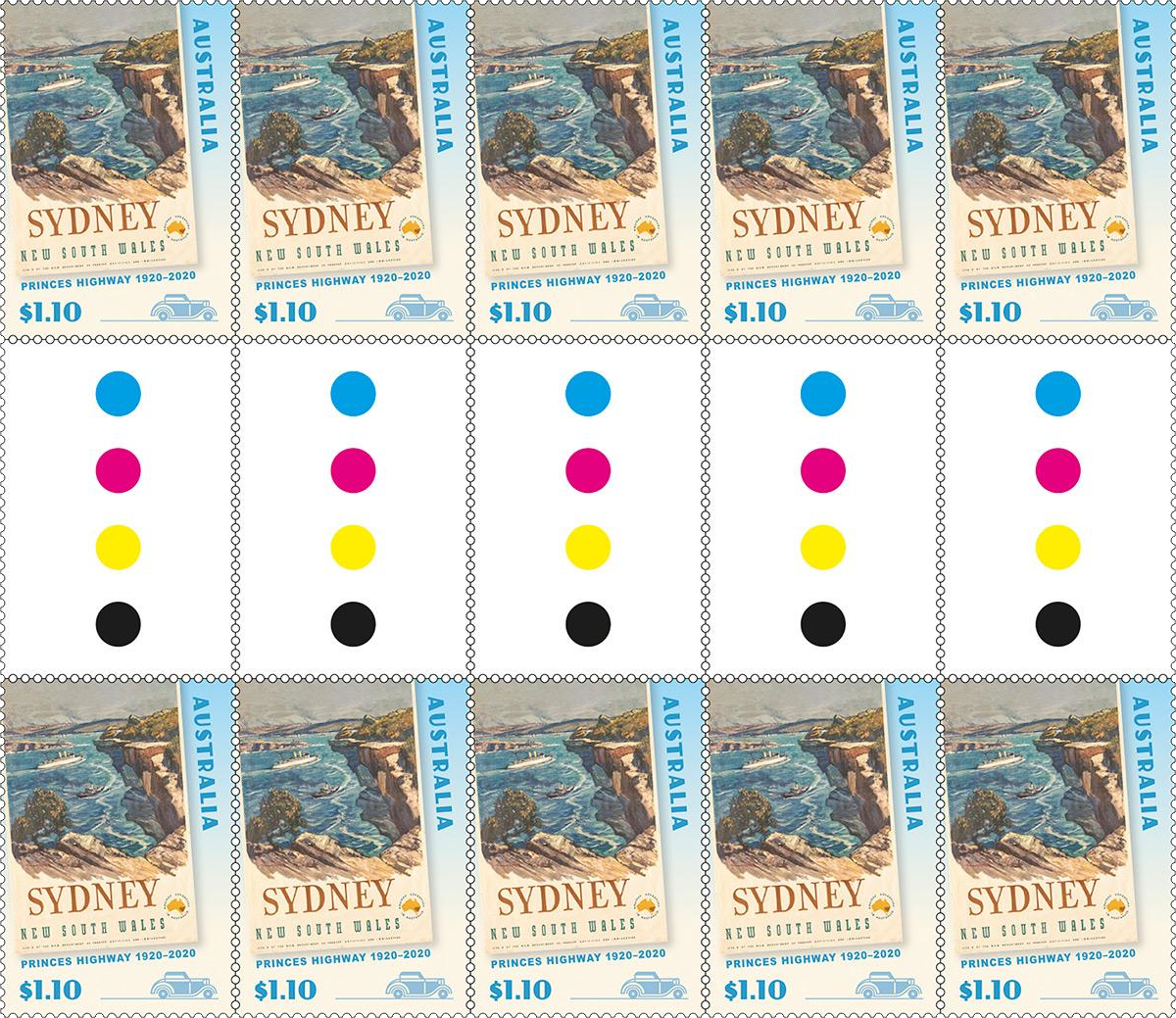 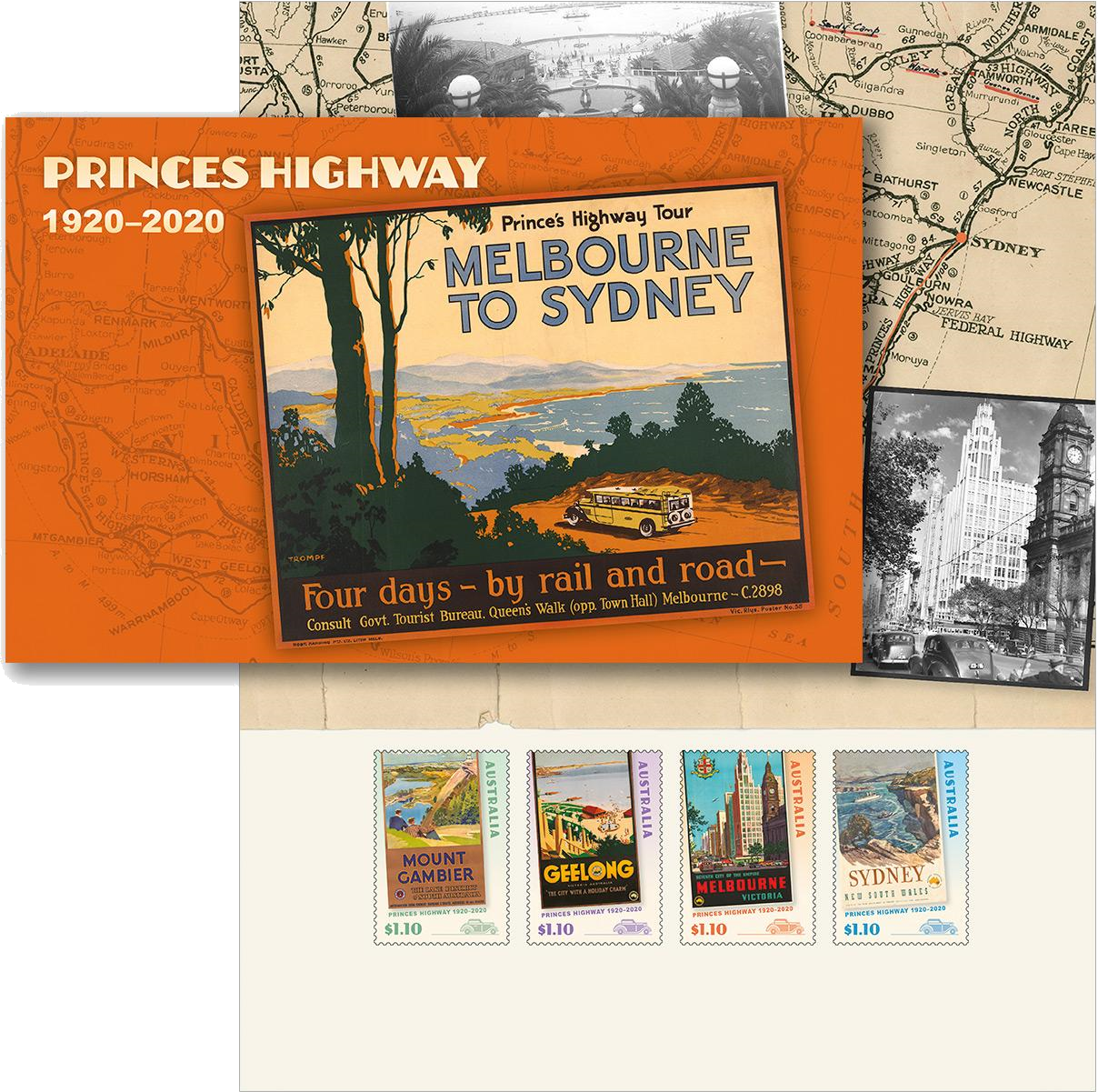 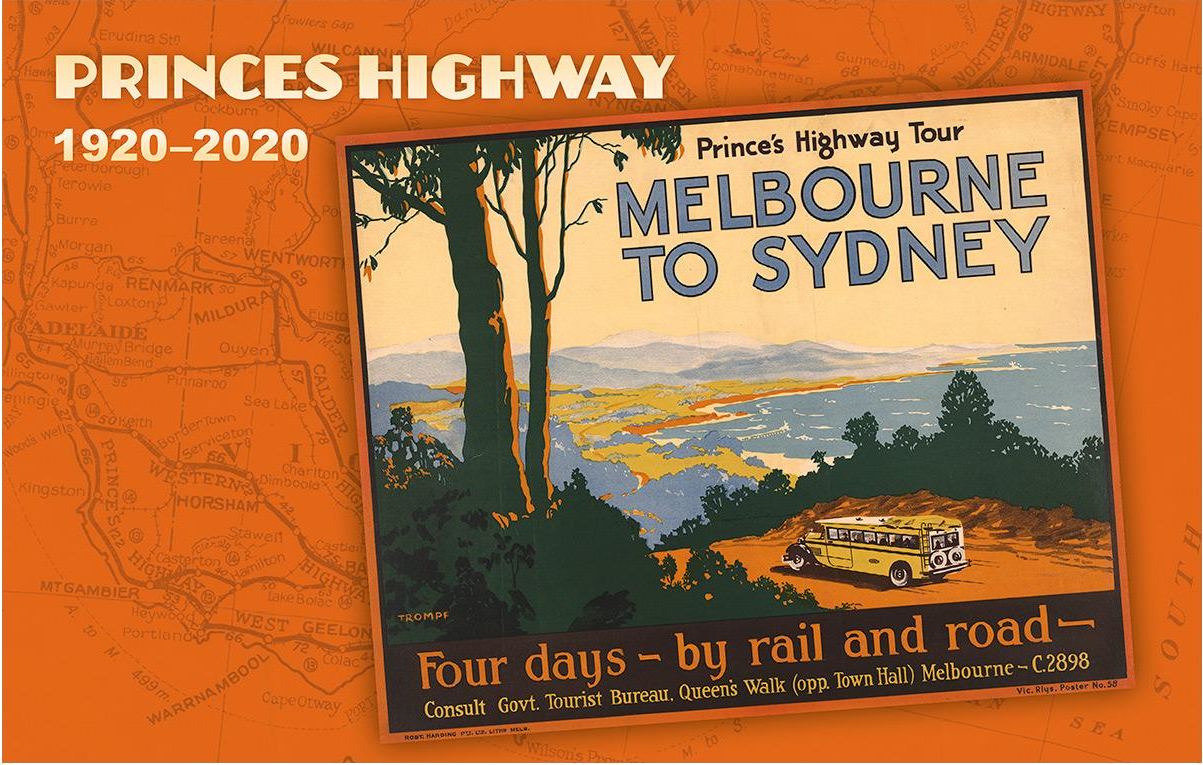 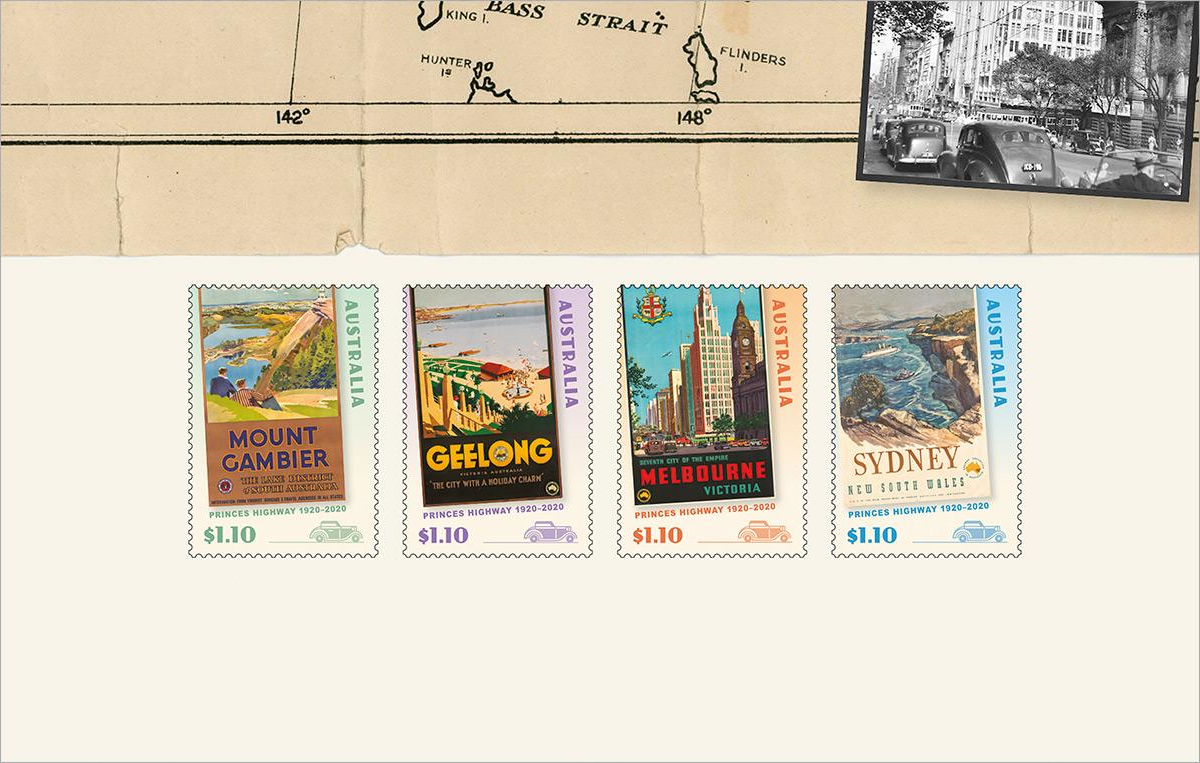 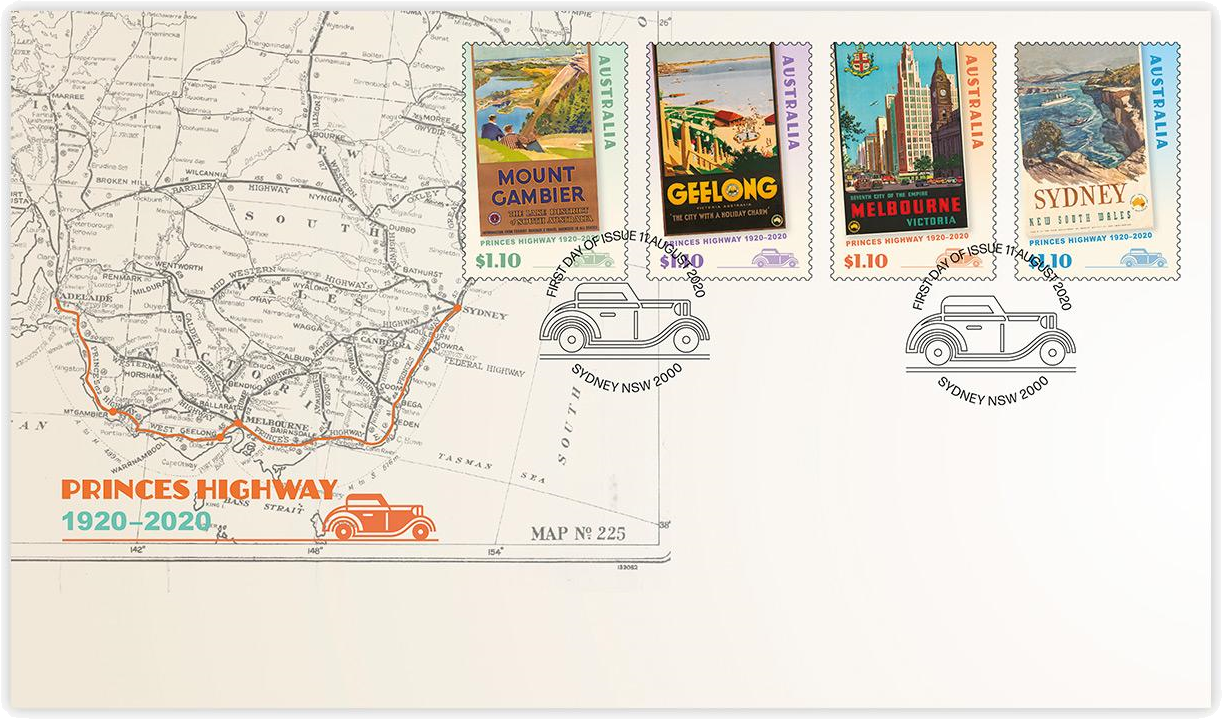 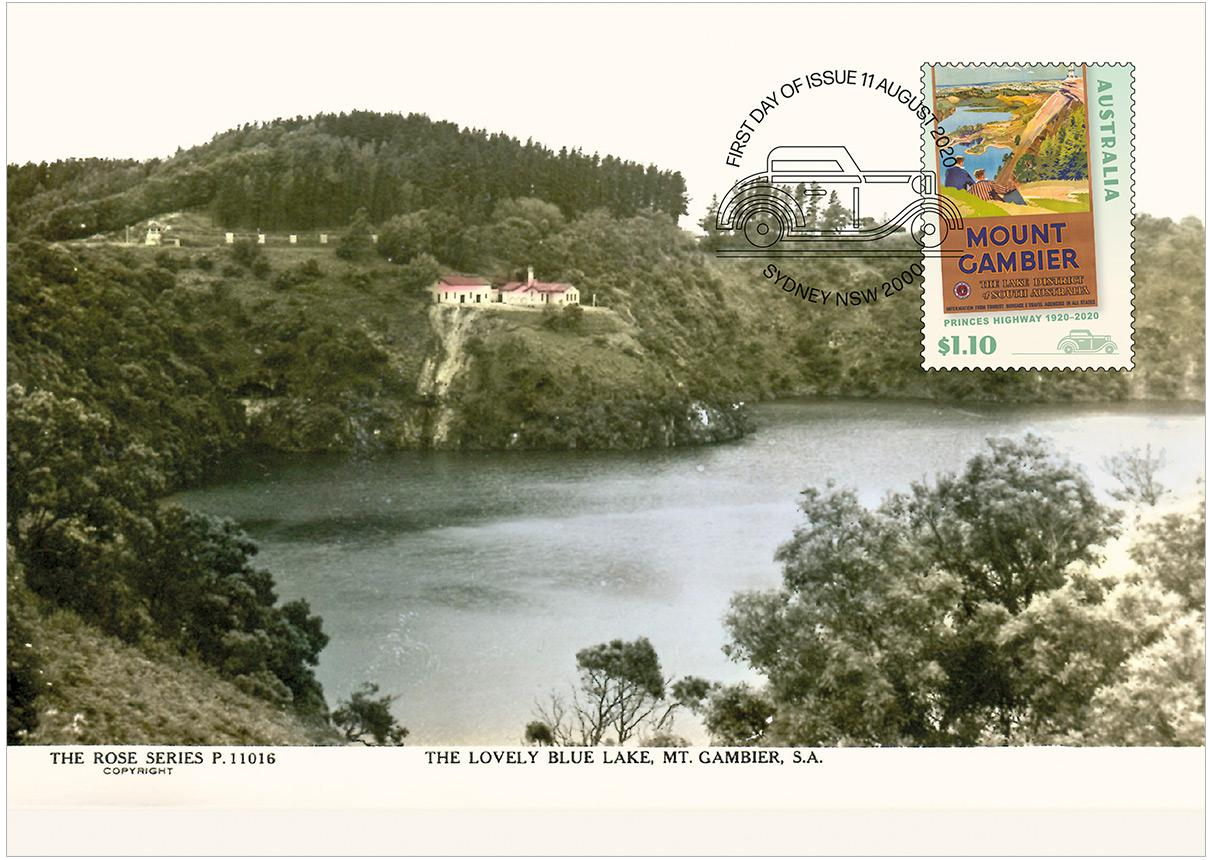 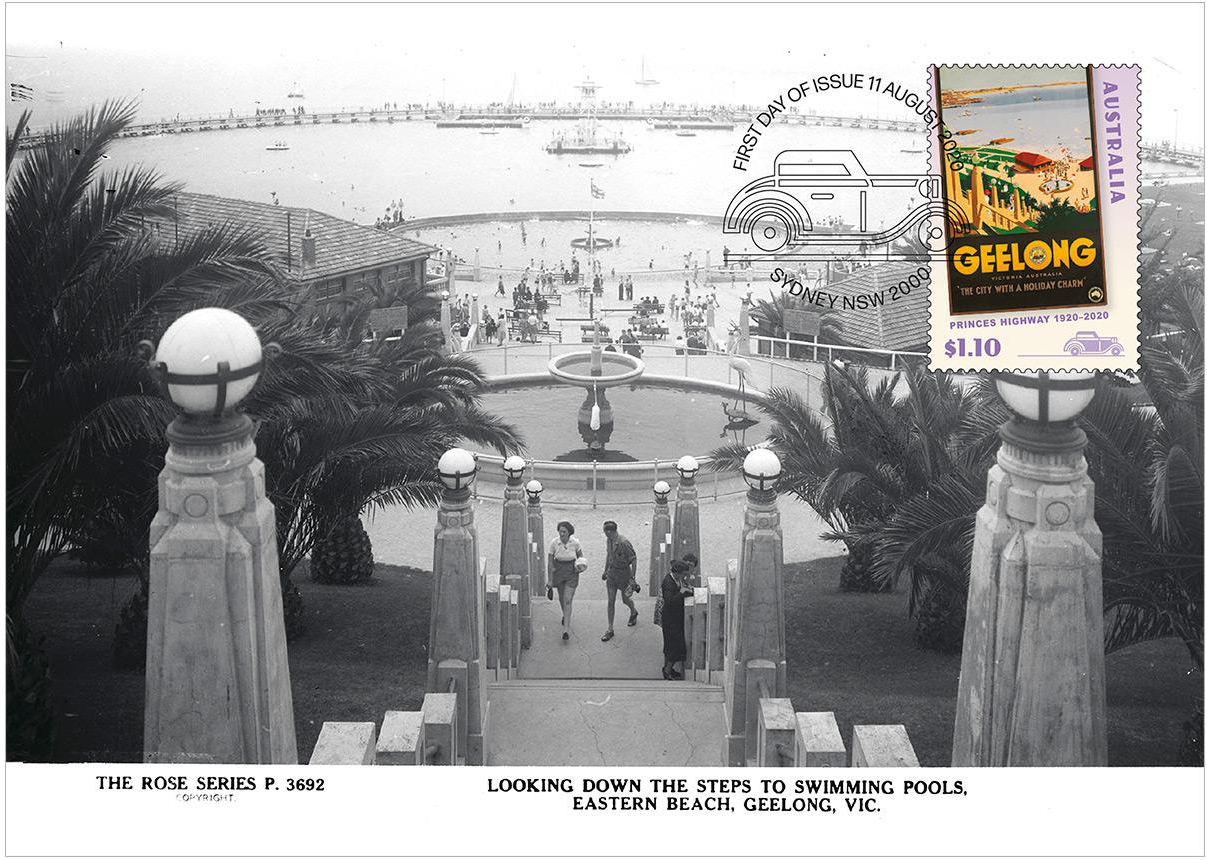 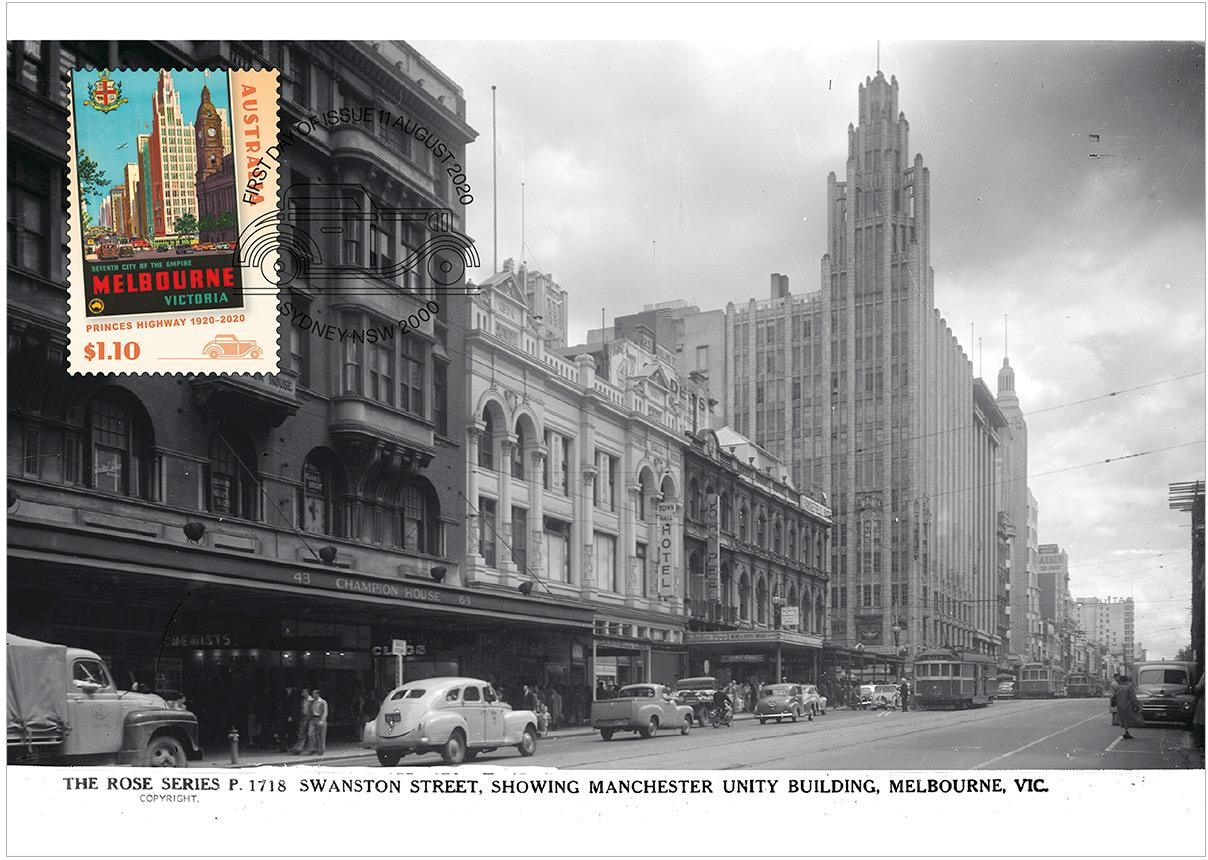 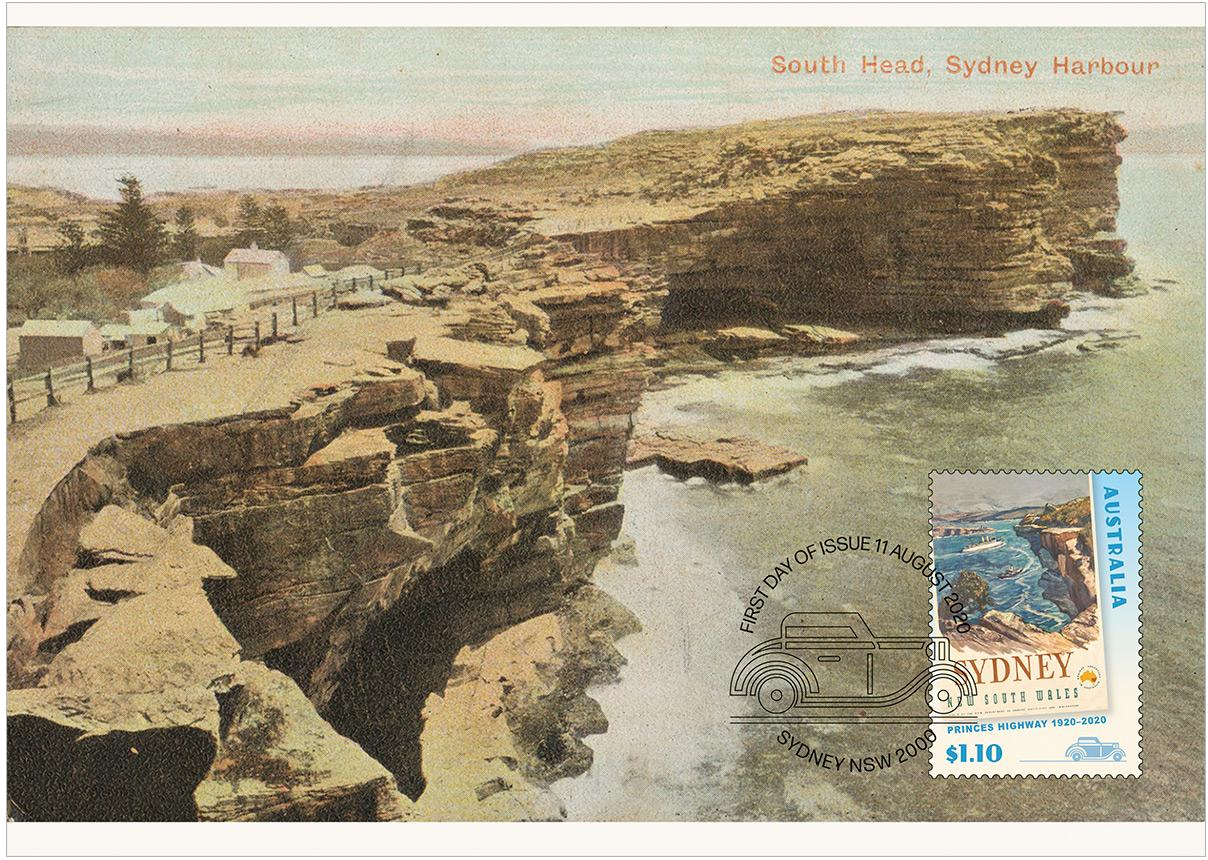