The continent of Australia is flat, hot and dry, so it’s rare to find high-altitude peaks, glacial lakes and alpine ecosystems such as those in the Australian Alps. This incredibly biodiverse alpine region of around 1.6 million hectares stretches from Canberra, in the Australian Capital Territory, through southern New South Wales, and along the Great Dividing Range in eastern Victoria.

The national heritage-listed Australian Alps encompass 11 national parks and nature reserves that contain plant and animal life found nowhere else in Australia and, in some cases, the world. These rare alpine environments include fern-filled forests and Snow Gum woodlands, cirque lakes and alpine meadows that sprout colourful wildflowers in summer and autumn. Glaciers have created incredible landforms containing a wide range of rock types that are hundreds of millions of years old.

This stamp issue showcases three spectacular alpine environments within the Australian Alps: snow-covered woodlands in Namadgi National Park, in the ACT; the spectacular granite tor, known as the Cathedral, in Mount Buffalo National Park, Victoria; and in Kosciuszko National Park, NSW, the picturesque Cootapatamba valley, through which the Swampy Plain River flows. 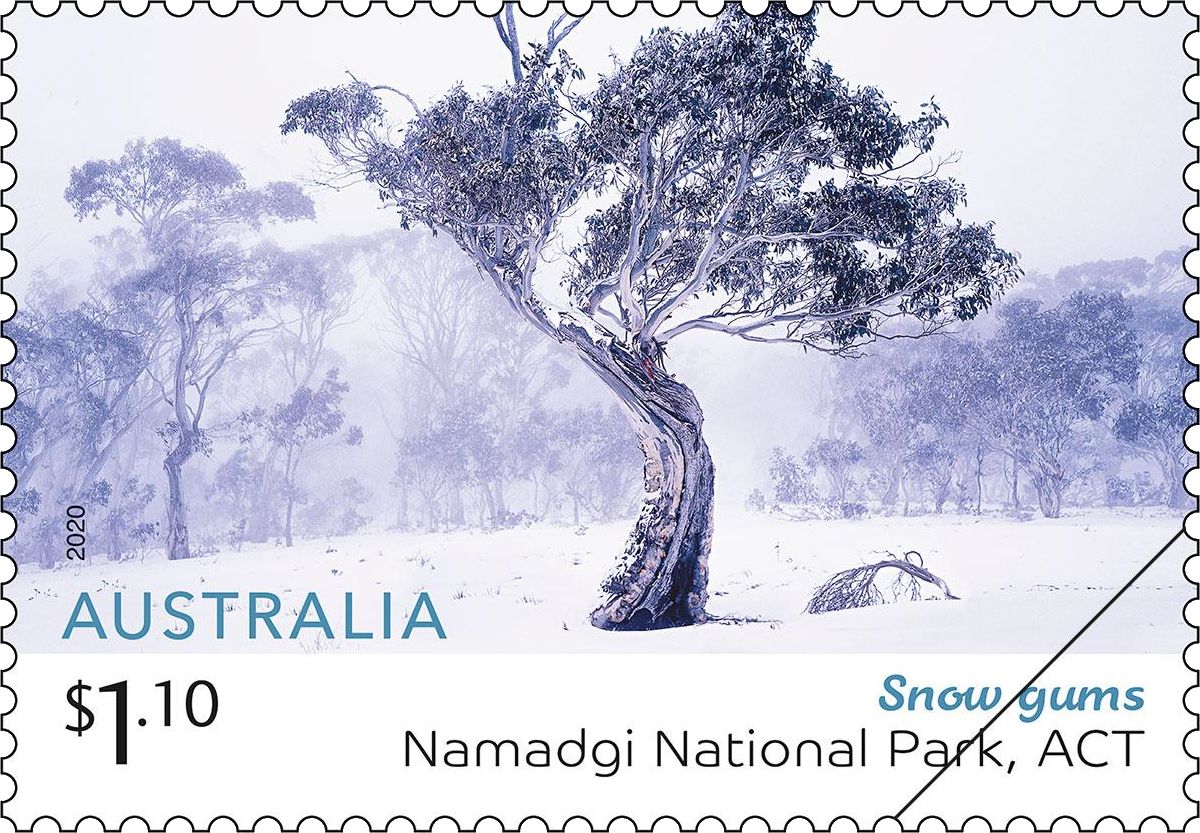 Namadgi National Park covers more than 105,000 hectares and is located around 40 kilometres southwest of Canberra. Declared a national park in 1984, Namadgi National Park contains around 160 kilometres of walking tracks and more than 700 species of plants. The Snow Gum (Eucalyptus pauciflora), the species of eucalyptus tree featured on the stamp, is a hardy variety that can handle the harsh winters of the Australian Alps. Its branches typically bend rather than break, under the weight of winter snowfall. The stamp photograph is by Jaime Plaza Van Roon. 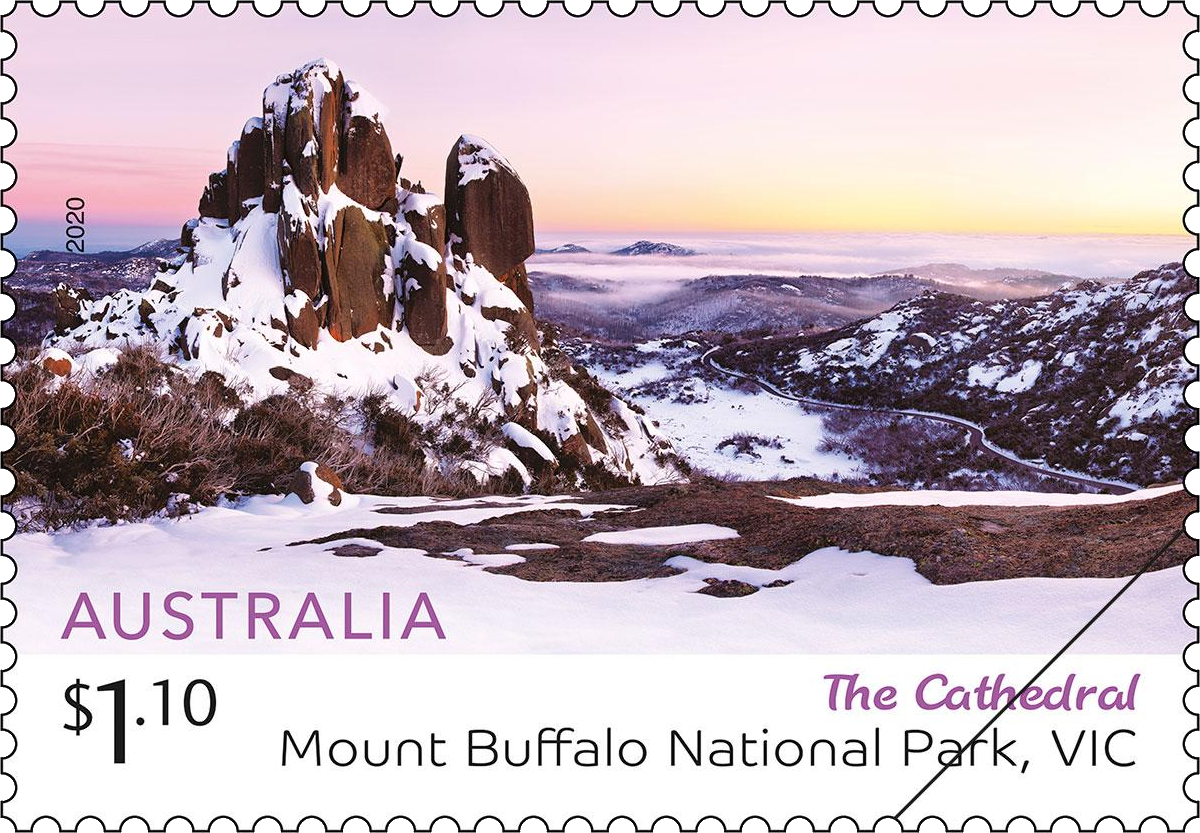 Mount Buffalo National Park, approximately 350 kilometres east of Melbourne, is known for the extensive walking tracks across its impressive plateau, which is studded with large granite tors, including the Cathedral, which is featured on the stamp. The stamp photograph is by Michael Boniwell. 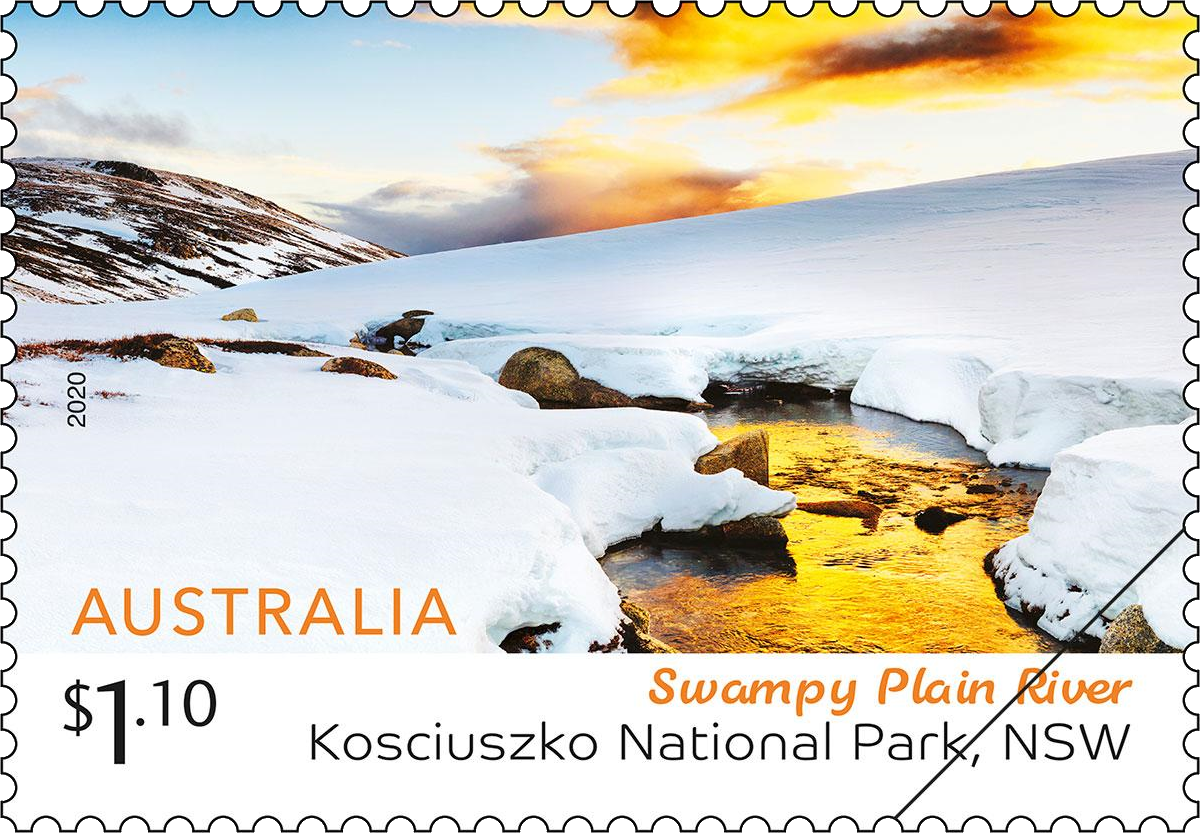 The Swampy Plain River (also known in some areas as the Swampy Plains River) is a perennial stream, located in the Snowy Mountains. Enclosed by Australia’s highest lake, Lake Cootapatamba, close to its source, and by Khancoban Dam, close to its mouth, the river rises on the southern slopes of Mount Kosciuszko, making it one of the highest rivers in Australia. The stamp photograph is by Bruce Hood. 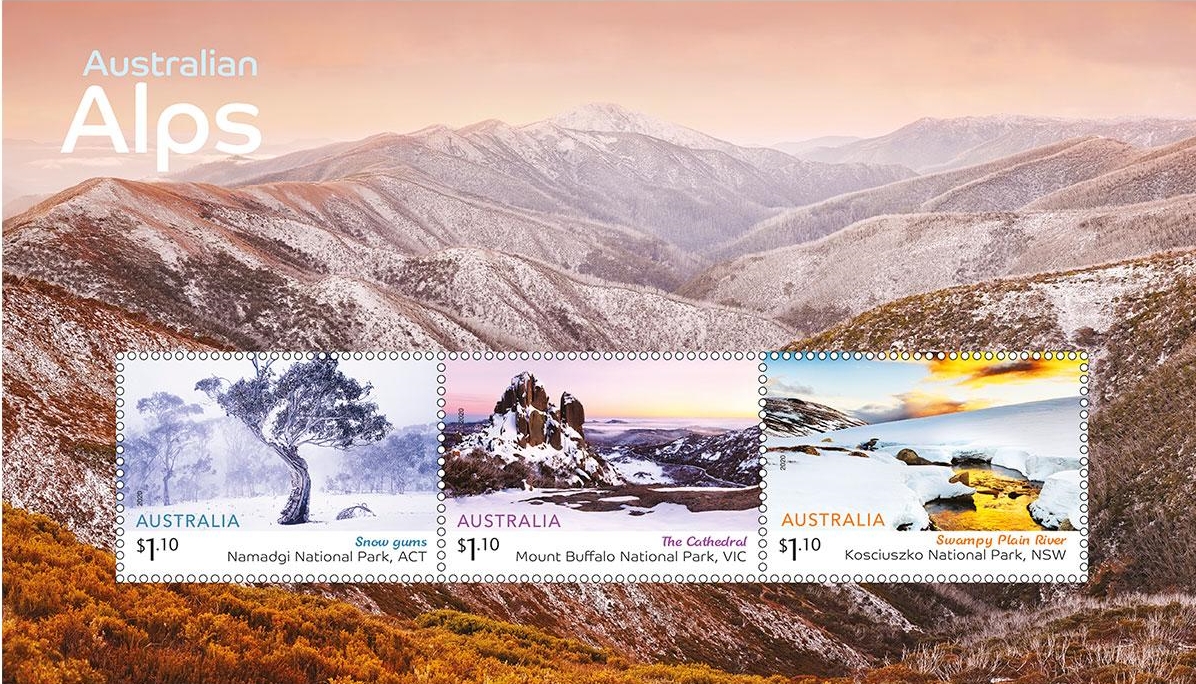 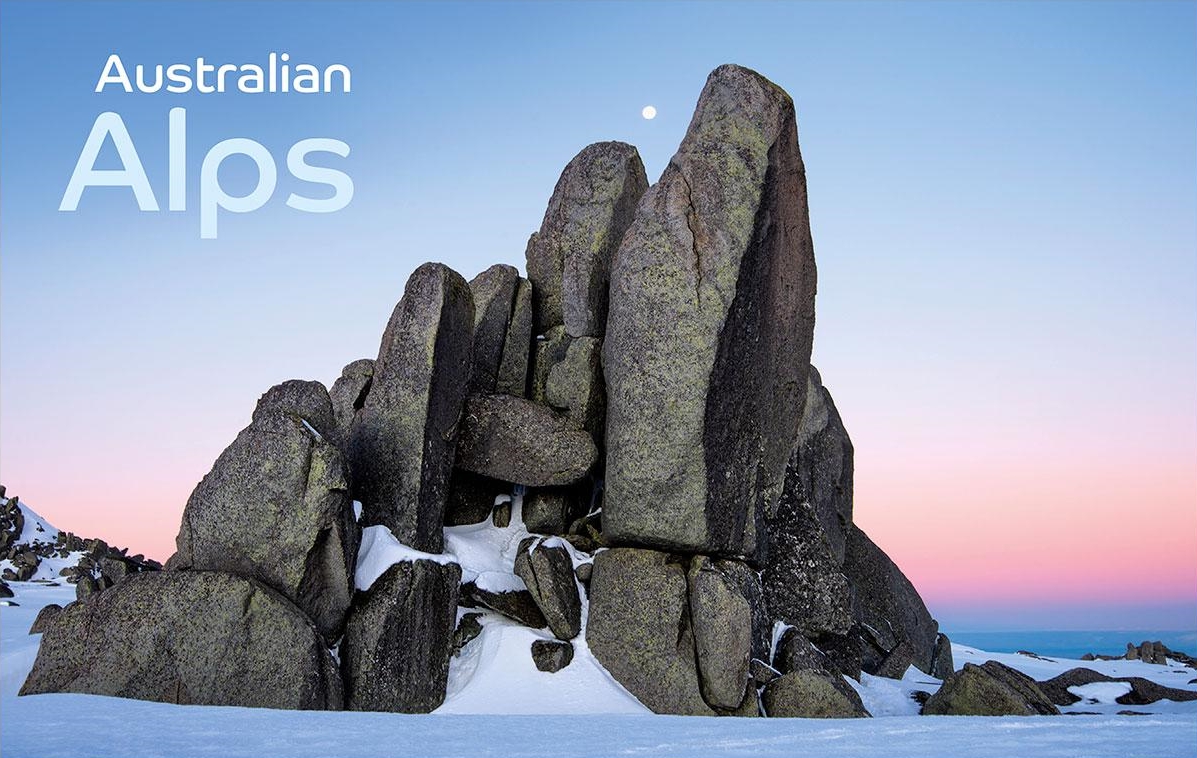 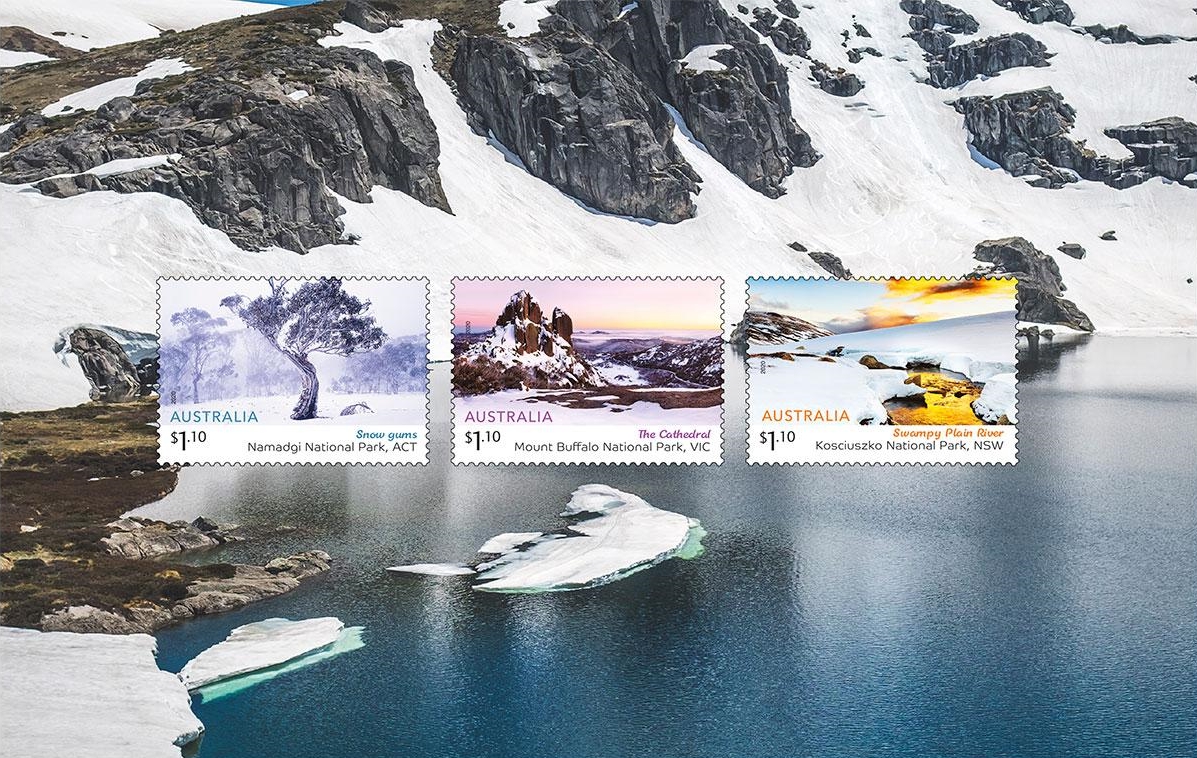 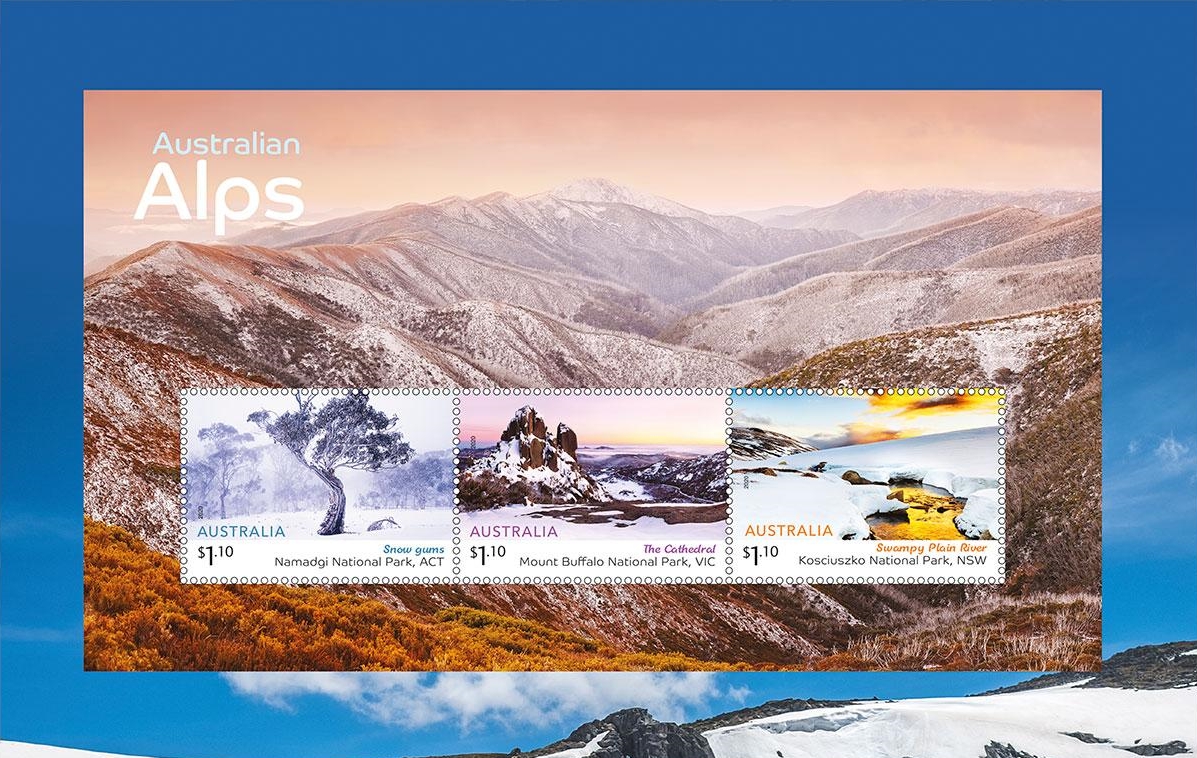 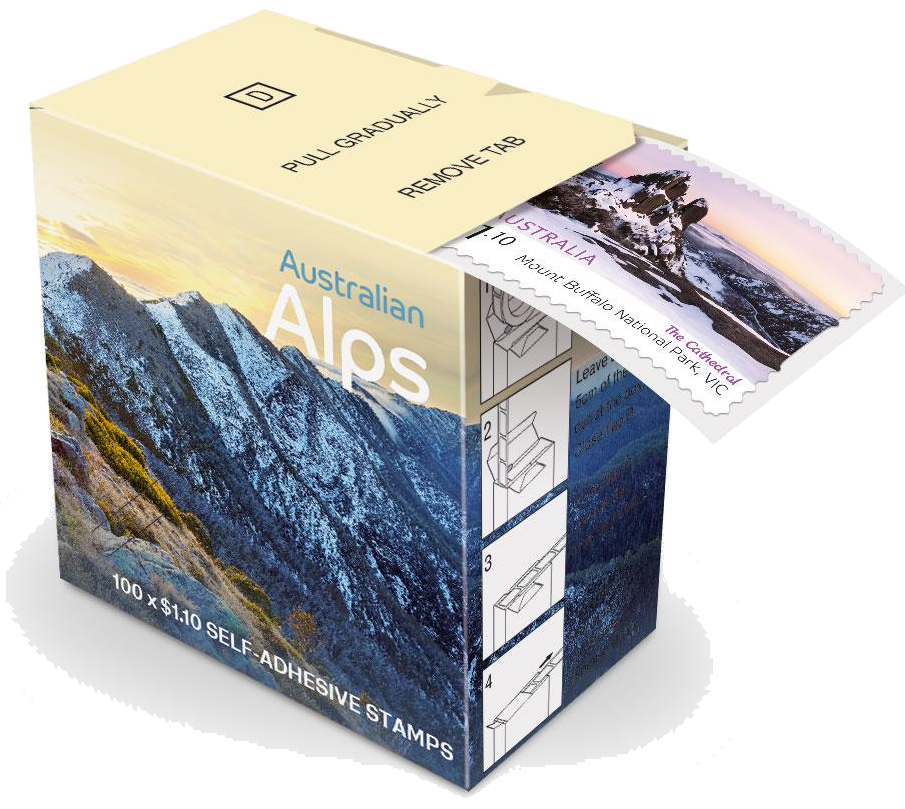 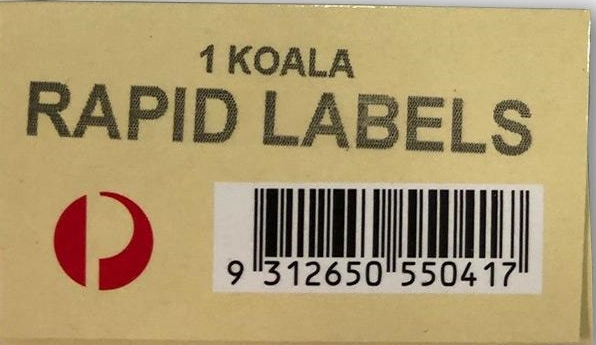 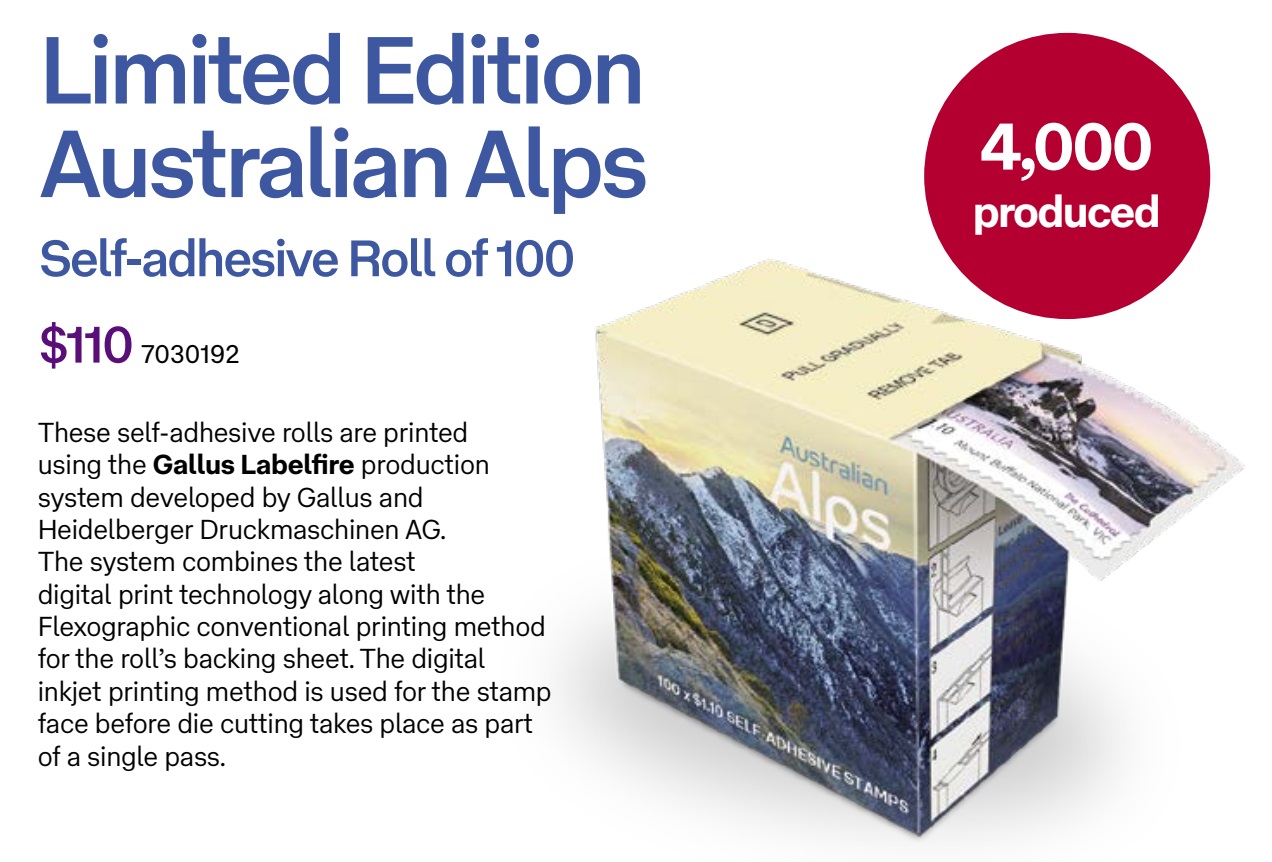 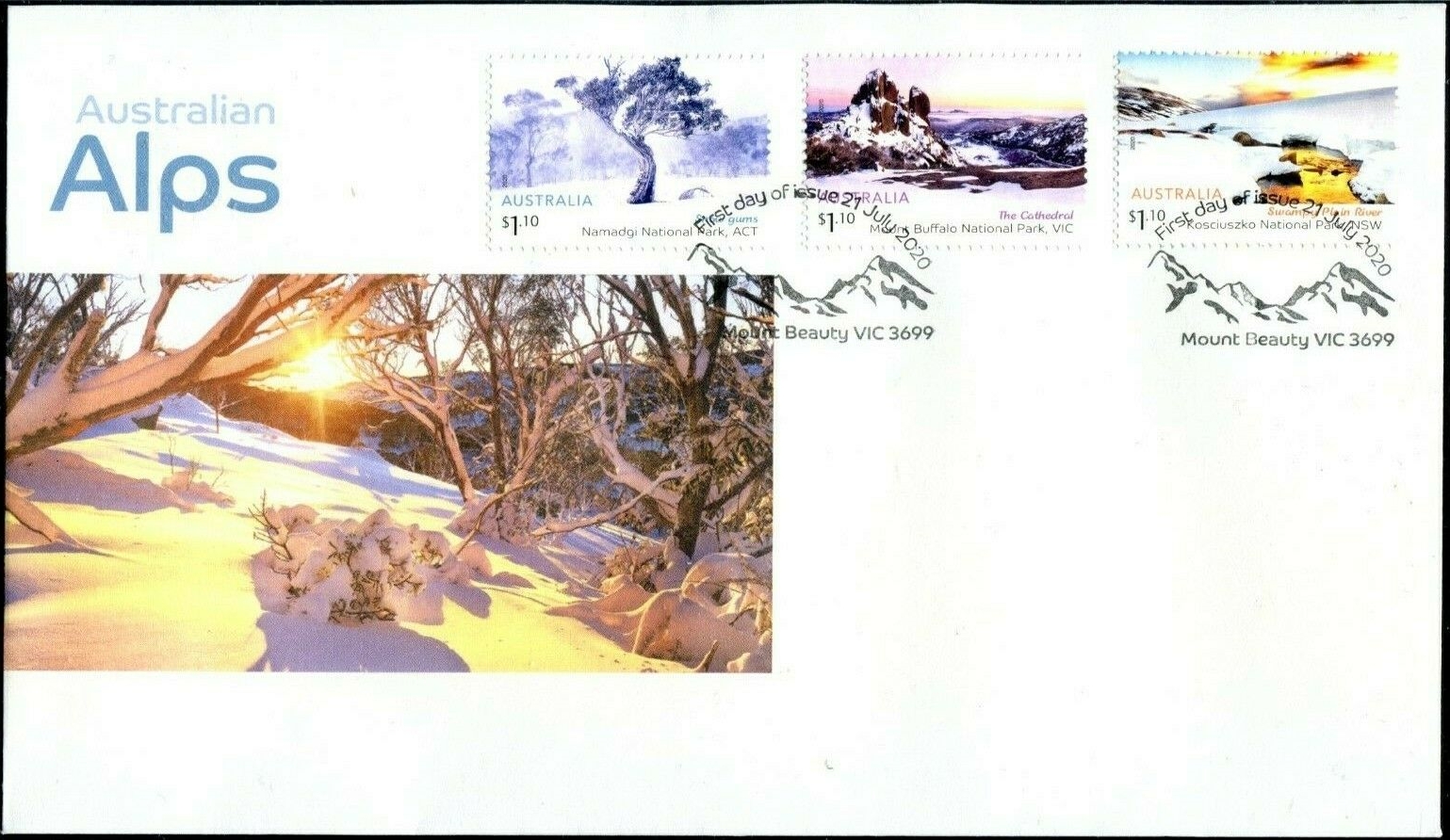 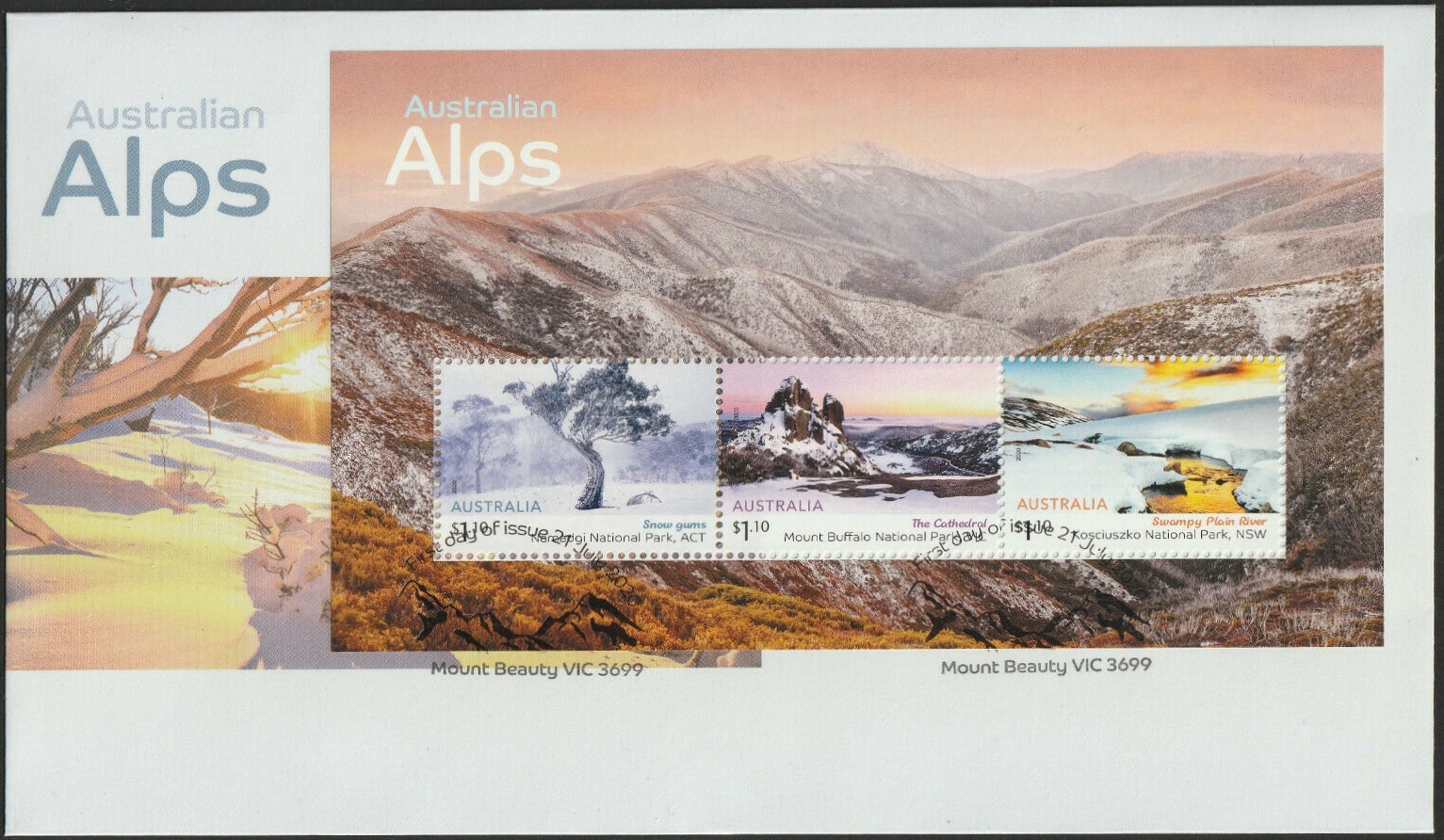 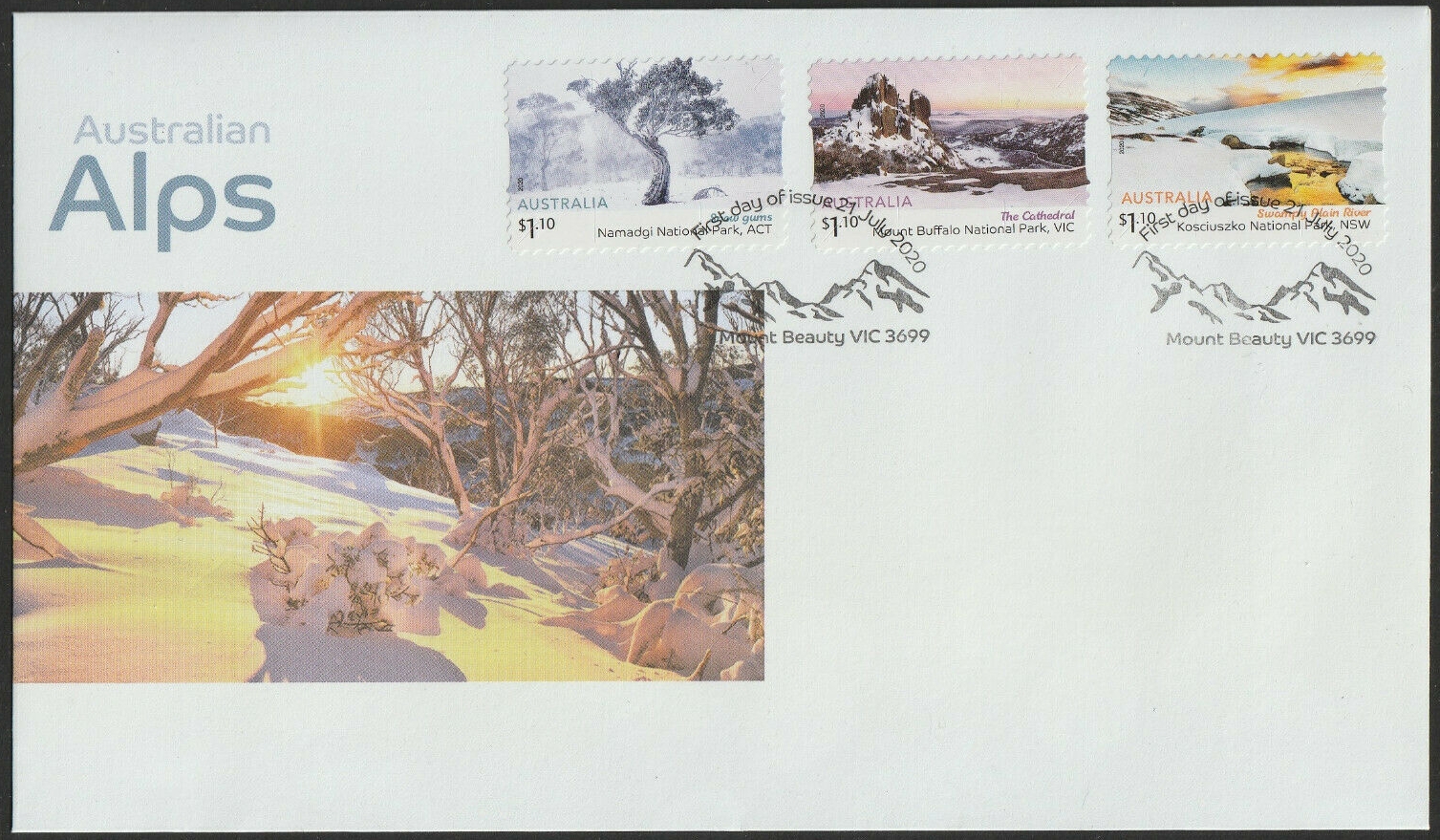 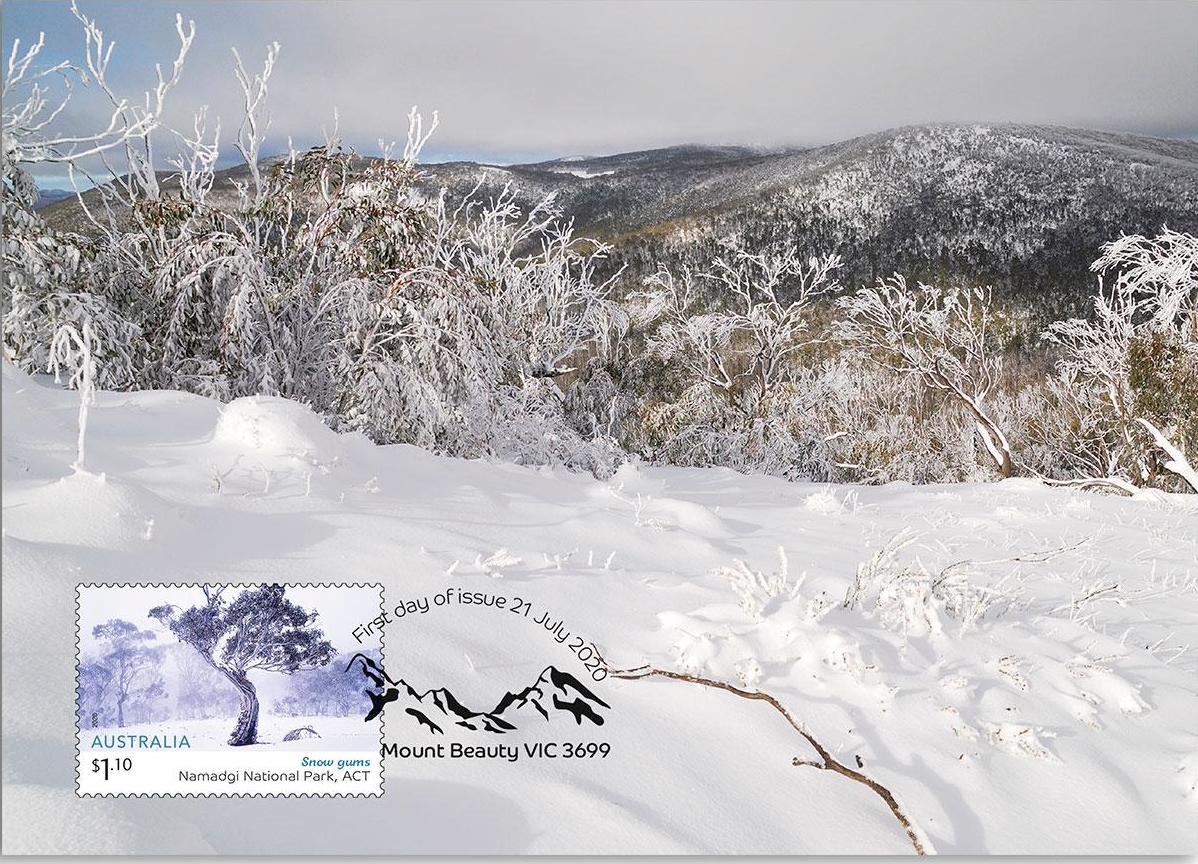 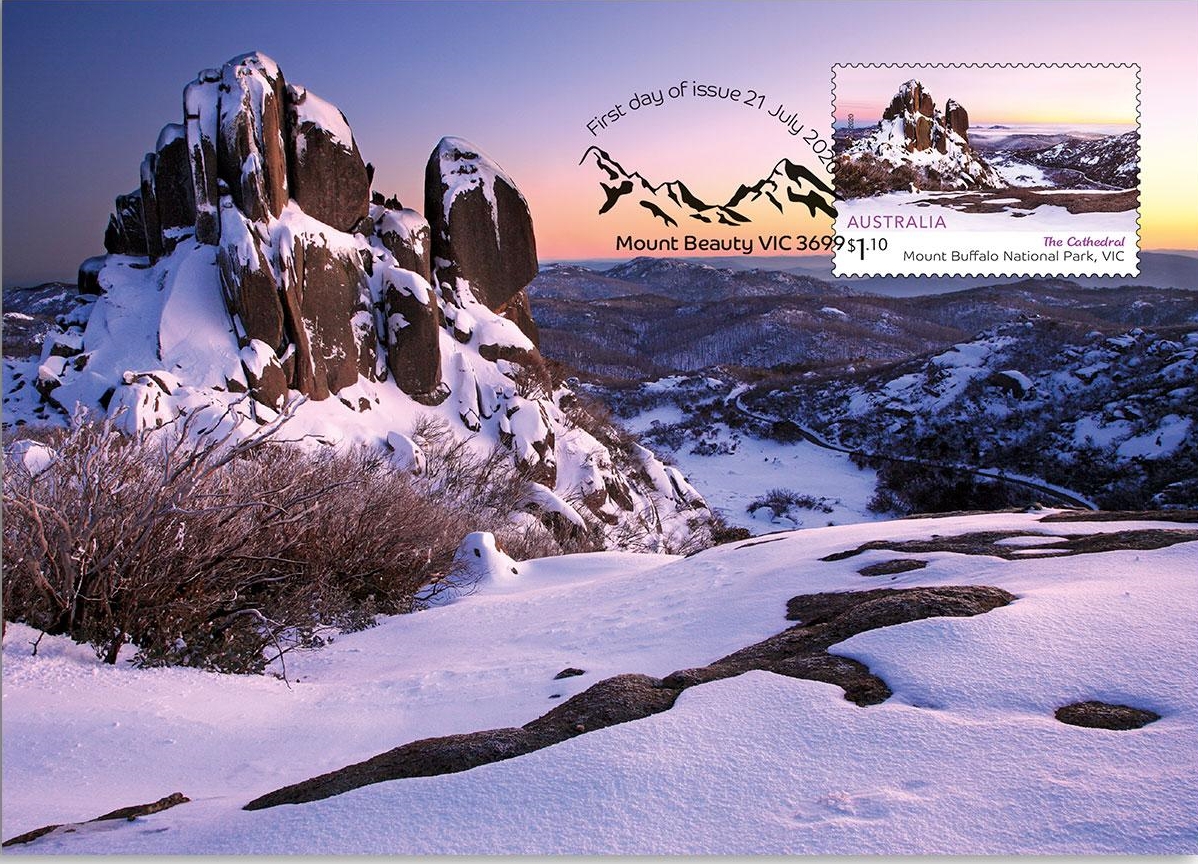 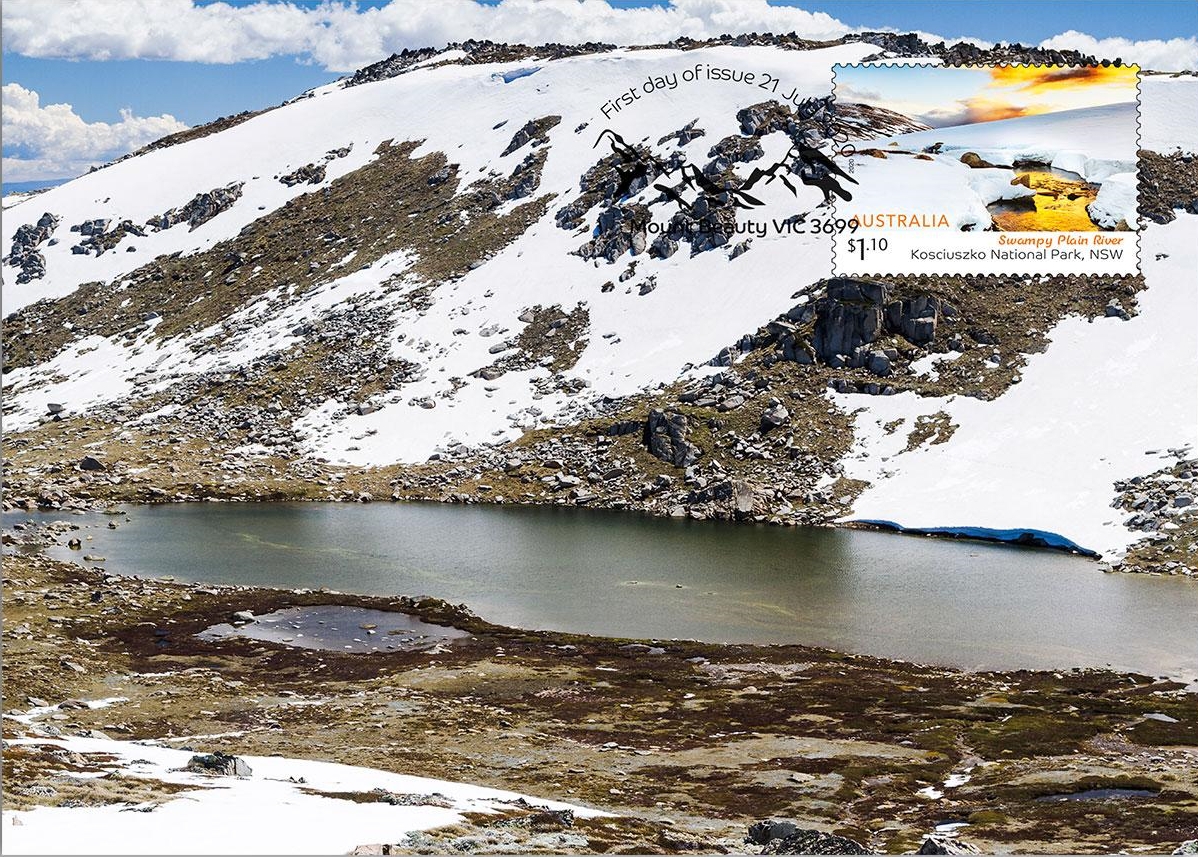 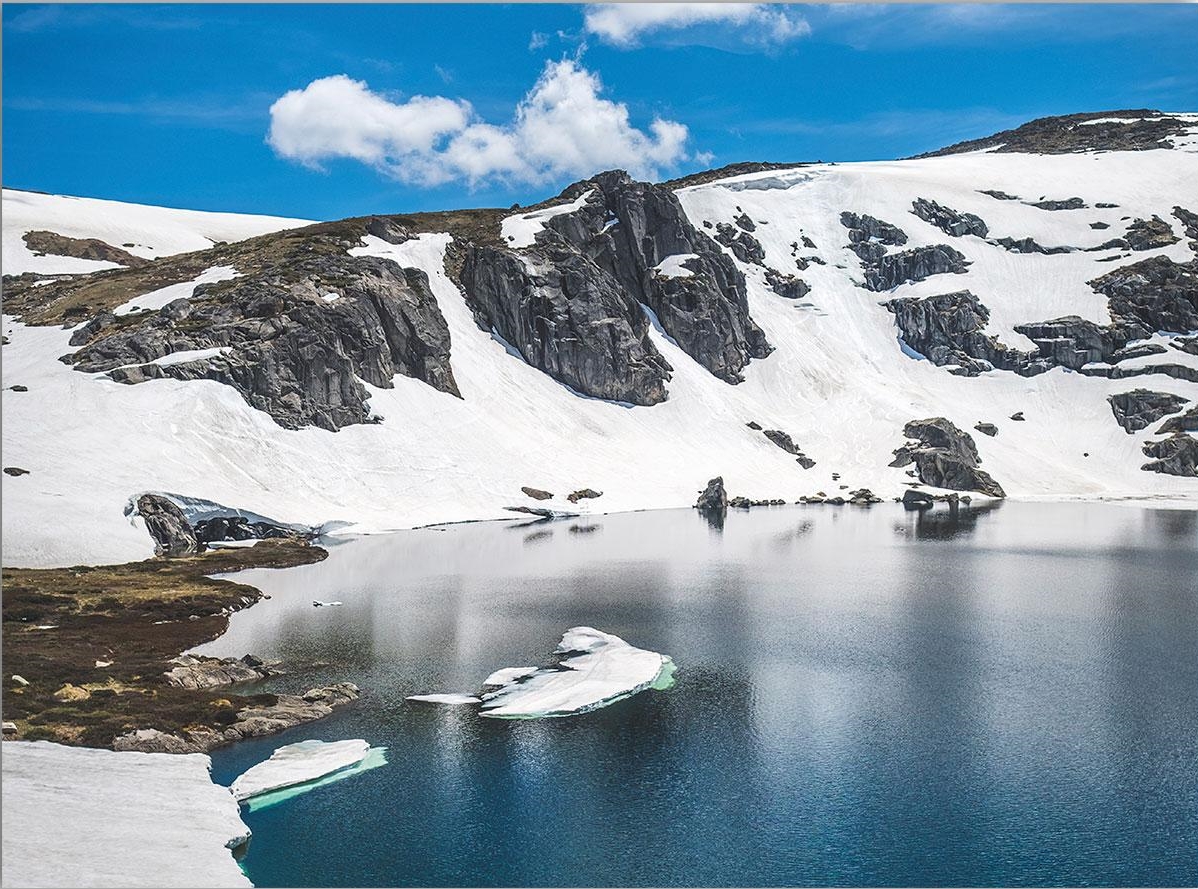 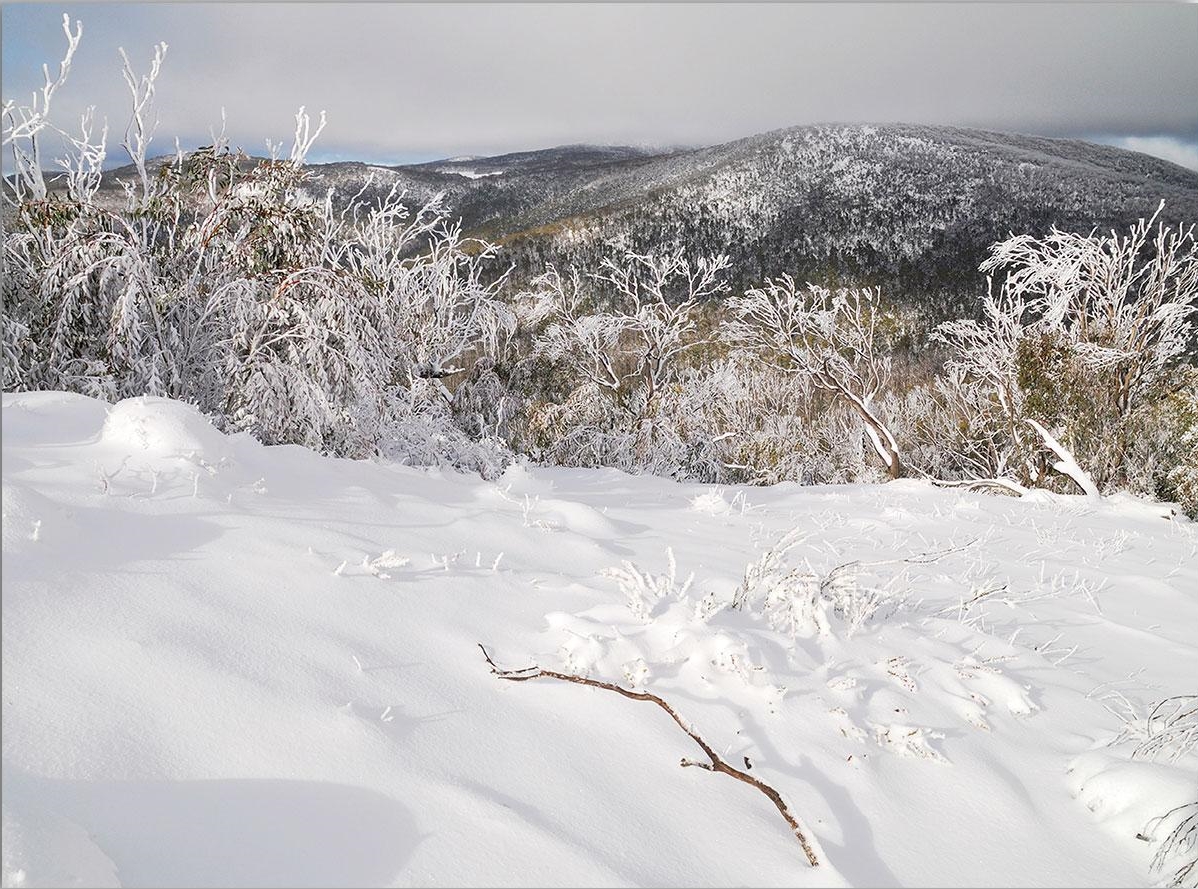 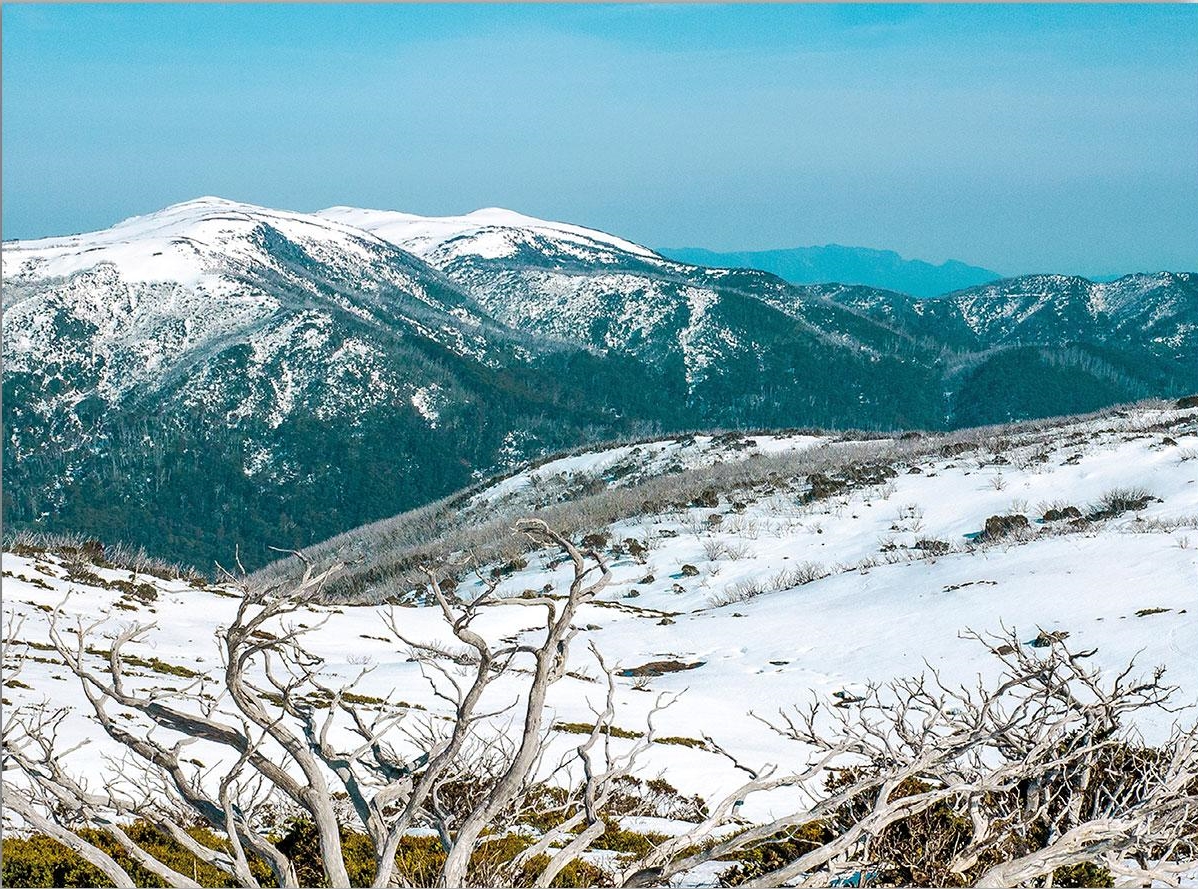 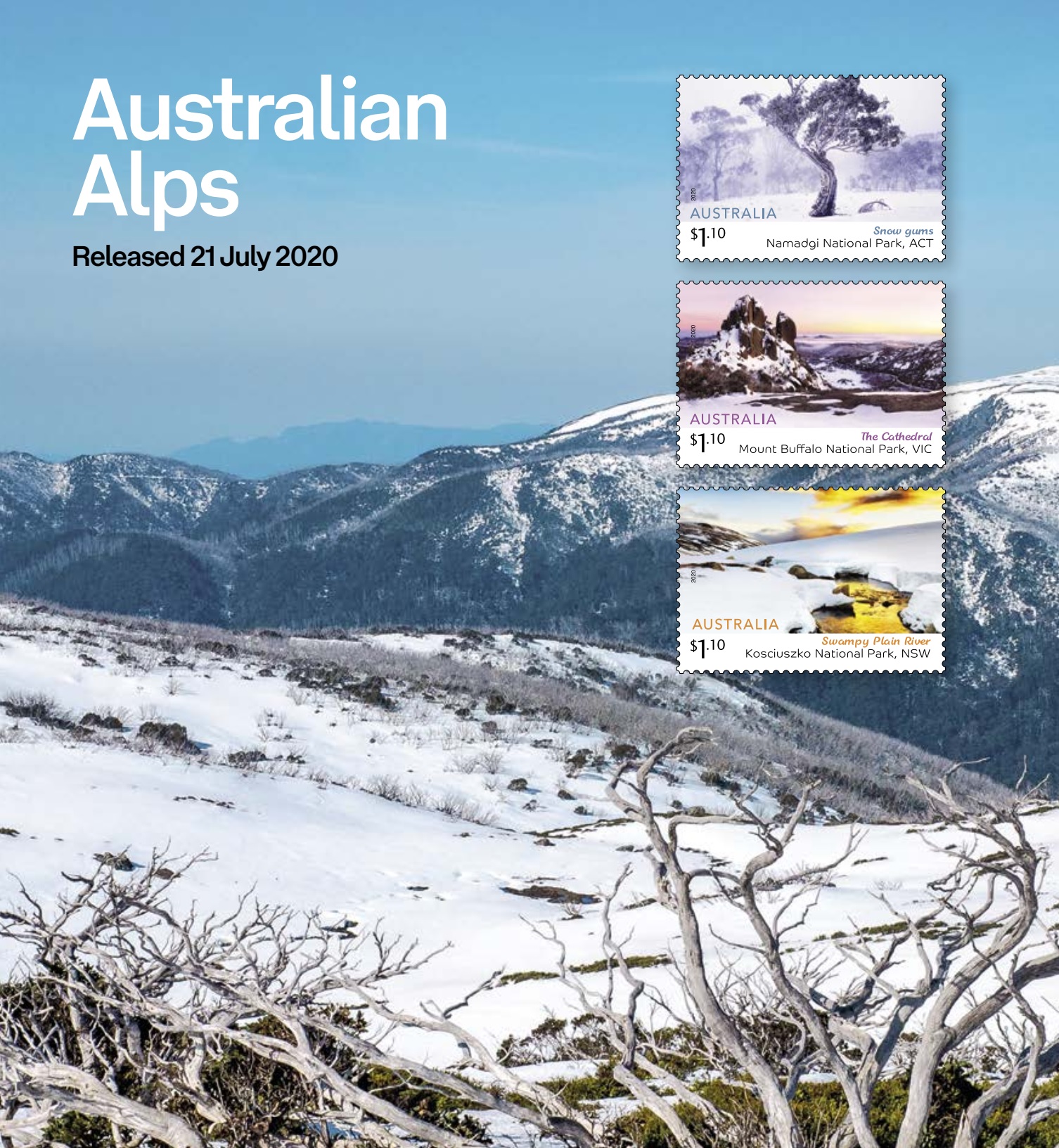 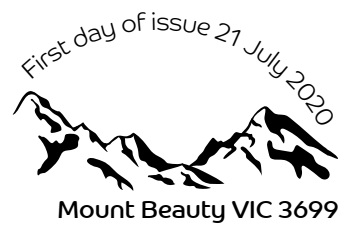