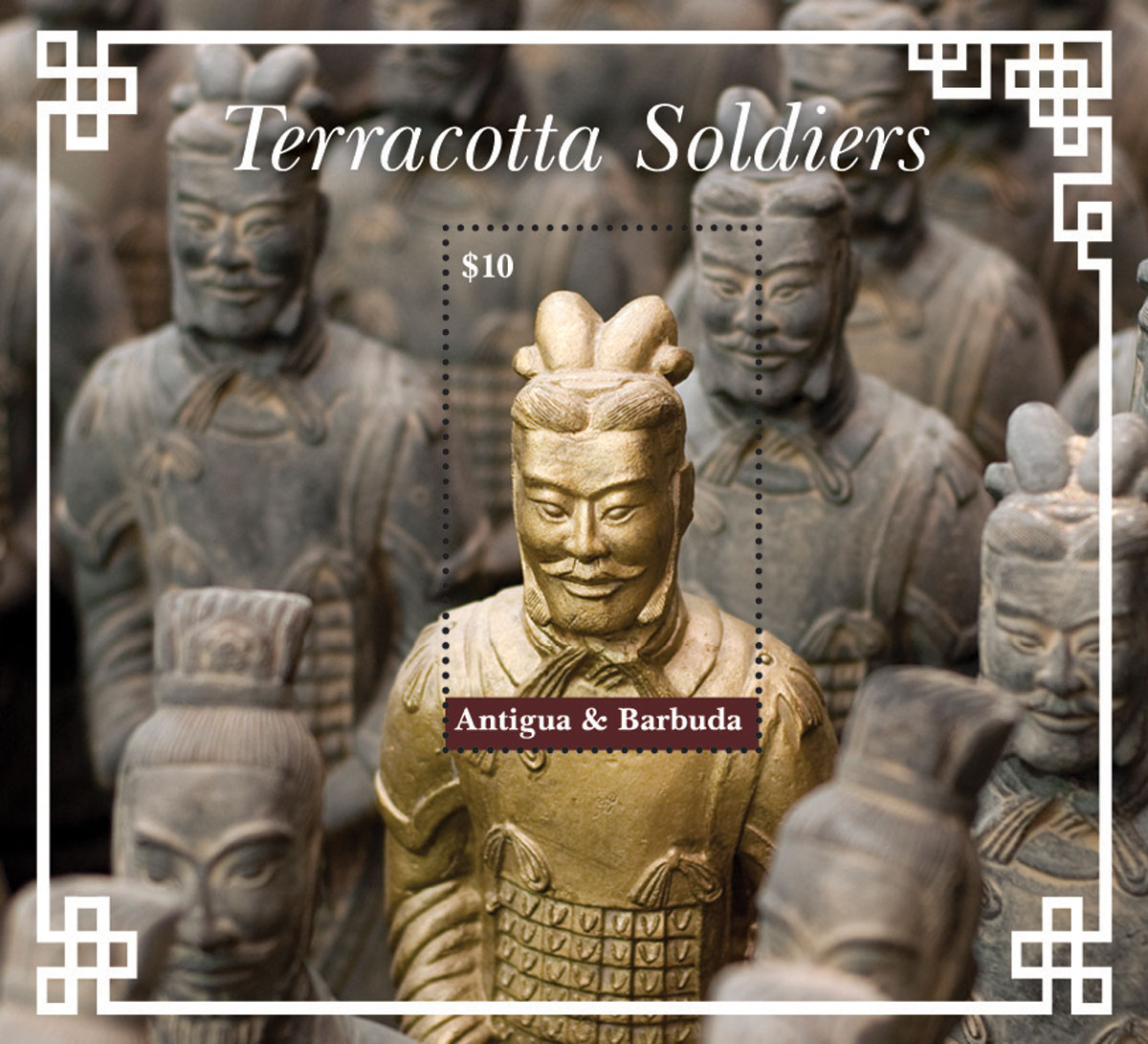 The Terracotta Army is a collection of terracotta sculptures depicting the armies of Qin Shi Huang, the first Emperor of China. It is a form of funerary art buried with the emperor in 210–209 BCE with the purpose of protecting the emperor in his afterlife.

The figures, dating from approximately the late third century BCE, were discovered in 1974 by local farmers in Lintong County, outside Xi’an, Shaanxi, China. The figures vary in height according to their roles, with the tallest being the generals. The figures include warriors, chariots and horses. Estimates from 2007 were that the three pits containing the Terracotta Army held more than 8,000 soldiers, 130 chariots with 520 horses, and 150 cavalry horses, the majority of which remained buried in the pits near Qin Shi Huang’s mausoleum. Other terracotta non-military figures were found in other pits, including officials, acrobats, strongmen, and musicians.

The construction of the tomb was described by historian Sima Qian (145–90 BCE) in Records of the Grand Historian, the first of China’s 24 dynastic histories, which was written a century after the mausoleum’s completion. Work on the mausoleum began in 246 BCE soon after Emperor Qin (then aged 13) ascended the throne, and the project eventually involved 700,000 workers. Geographer Li Daoyuan, writing six centuries after the first emperor’s death, recorded in Shui Jing Zhu that Mount Li was a favored location due to its auspicious geology, “famed for its jade mines, its northern side was rich in gold, and its southern side rich in beautiful jade; the first emperor, covetous of its fine reputation, therefore chose to be buried there”.

Sima Qian wrote that the first emperor was buried with palaces, towers, officials, valuable artifacts and wondrous objects. According to this account, 100 flowing rivers were simulated using mercury, and above them the ceiling was decorated with heavenly bodies below which were the features of the land. Some translations of this passage refer to “models” or “imitations”; however, those words were not used in the original text, which makes no mention of the terracotta army. High levels of mercury were found in the soil of the tomb mound, giving credence to Sima Qian’s account. Later historical accounts suggested that the complex and tomb itself had been looted by Xiang Yu, a contender for the throne after the death of the first emperor. However, there are indications that the tomb itself may not have been plundered.

The Terracotta Army was discovered on 29 March 1974 by farmers digging a water well approximately 1.5 kilometres (0.93 mi) east of the Qin Emperor’s tomb mound at Mount Li (Lishan), a region riddled with underground springs and watercourses. For centuries, occasional reports mentioned pieces of terracotta figures and fragments of the Qin necropolis – roofing tiles, bricks and chunks of masonry. This discovery prompted Chinese archaeologists, including Zhao Kangmin, to investigate, revealing the largest pottery figurine group ever found. A museum complex has since been constructed over the area, the largest pit being enclosed by a roofed structure.