One of the most dramatic landscapes capable of showcasing the nature of the Principality of Andorra is that which can be seen in Collada dels Meners. A landscape tinged with infinite ochre and red tones that reveal the large amount of oxides present in the area, which humans have exploited for centuries in the multitude of mining operations.

Between the 17th and 19th centuries, the area was the main mining region of Andorra, from open-cast mining at the start, to later extracting the mineral directly from the veins in the subsoil, which had to be reached by drilling into the ground with galleries that have come to form a whole network of tunnels and narrow passages which occasionally open into unusual rooms of up to 4-metres wide and 3-metres high, where the vein from which the mineral is obtained is located. The entrances to the galleries are currently closed for safety reasons, although at first sight it is still possible to see the artificial plains the miners formed opposite the openings of the galleries with the waste and the cabins they occupied while working in spring and summer. They were organised in groups of no more than five workers, with most of them coming from the Arieja region, and it has been recorded that there were seven companies working simultaneously by 1750.

The Collada dels Meners opens at an altitude of over 2,700 metres, between summits such as the Serrera and the Cabaneta, its ridge serves as the border for the parishes of Ordine and Canillo and it provides passage to the Ransoll valley from the Vall de Sorteny Nature Reserve on the western side.

The motif on the stamp depicts a photograph by photographer Jordi Soler, featuring the summits surrounding the mountain pass. 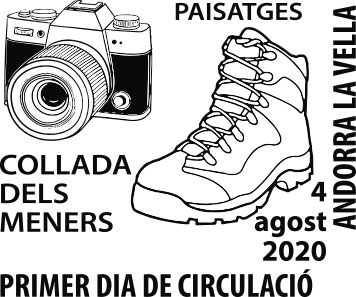